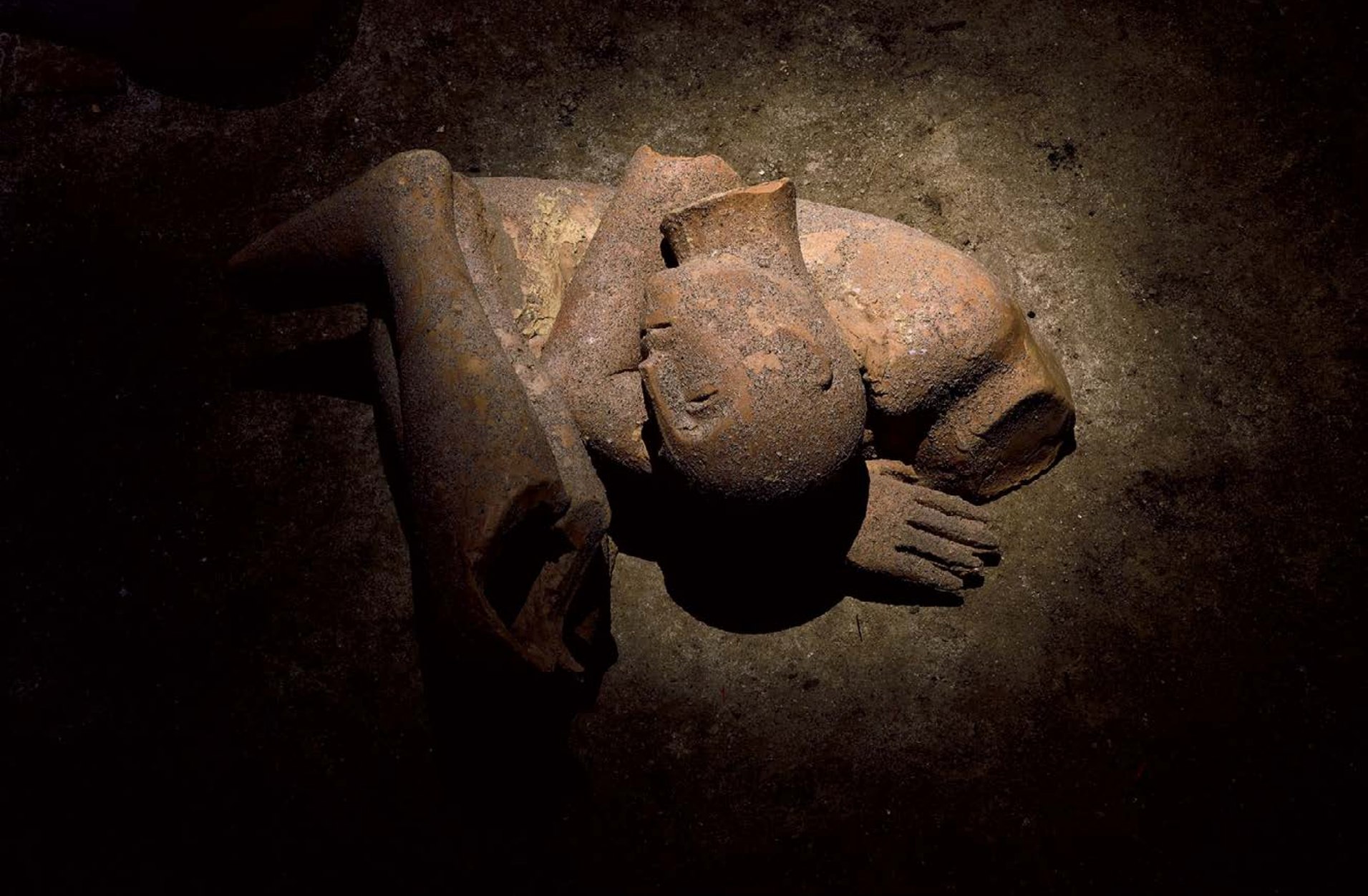 Unperturbed eternal men, made of terracotta made by juxtaposing fragments coming from the same matrix but combined differently, each with the unique color of the clay used: I Dormienti [The Sleepers] by Mimmo Paladino were born in the late Nineties, when the artist first exhibited them in Poggibonsi (1998) as part of the Arte all’Arte exhibition. In 2000 he decided to cast them in bronze for the permanent installation into the Fonte delle Fate (Poggibonsi). Other terracotta Sleepers and Crocodiles were created for the great exhibition in the underground rooms of the Roundhouse in London (1999), in dialogue with a sound system specifically designed by the British musician, composer, and producer Brian Eno. Twenty years later, the artist personally curates a new set-up, an unpublished one, an unrepeatable unicum designed for the first exhibition in Milan, in the spaces of Cardi Gallery

“We wish to inaugurate this new year with an important and ambitious exhibition – explains Nicolò Cardi –. In a particular moment like today we continue to concretely produce high quality contents, so as to stimulate a new planning for the art system and give a sign of trust in the world of culture.”

In the dim light of the large open space of the Milanese gallery, the artist arranges 32 sculptures according to a new conceptual construction, re-modulating the tone of the installation with solemnity. Once again, Brian Eno’s musical compositions free I Dormienti from the heaviness of sleep or from the evanescence of dreams, restoring them a vital breath and a serene concreteness.

“The idea of assembling shapes as if they were modules recurs in Paladino” states Demetrio Paparoni, author of the volume accompanying the exhibition. “It should not be forgotten that the artist has on several occasions manifested an aptitude for creating works conceived as a set of fragments archived in his visual imagination. It is this attitude that led him to create artworks together with Sol Le Witt, Alighiero Boetti, and, last but not least, Brian Eno, artists who have always worked with a different concept of module and repetition.”

The bodies of I Dormienti – in which many have seen a reference to the remains of the inhabitants of Pompeii and Herculaneum, but which actually refer to Henry Moore’s drawings representing the British war shelters during World War II – are accompanied to the first floor of the gallery from the great unpublished work Sunday Mornin ‘Comin’ Down, composed of 100 drawings made during 2020. This work, like I Dormienti as well, is emblematic of the way of working of the artist; as a puzzle where the fragments converge in a monumental unicum, a “picture window” on the images that inhabit the artist’s world in search of a natural balance between intimism and collective memory.