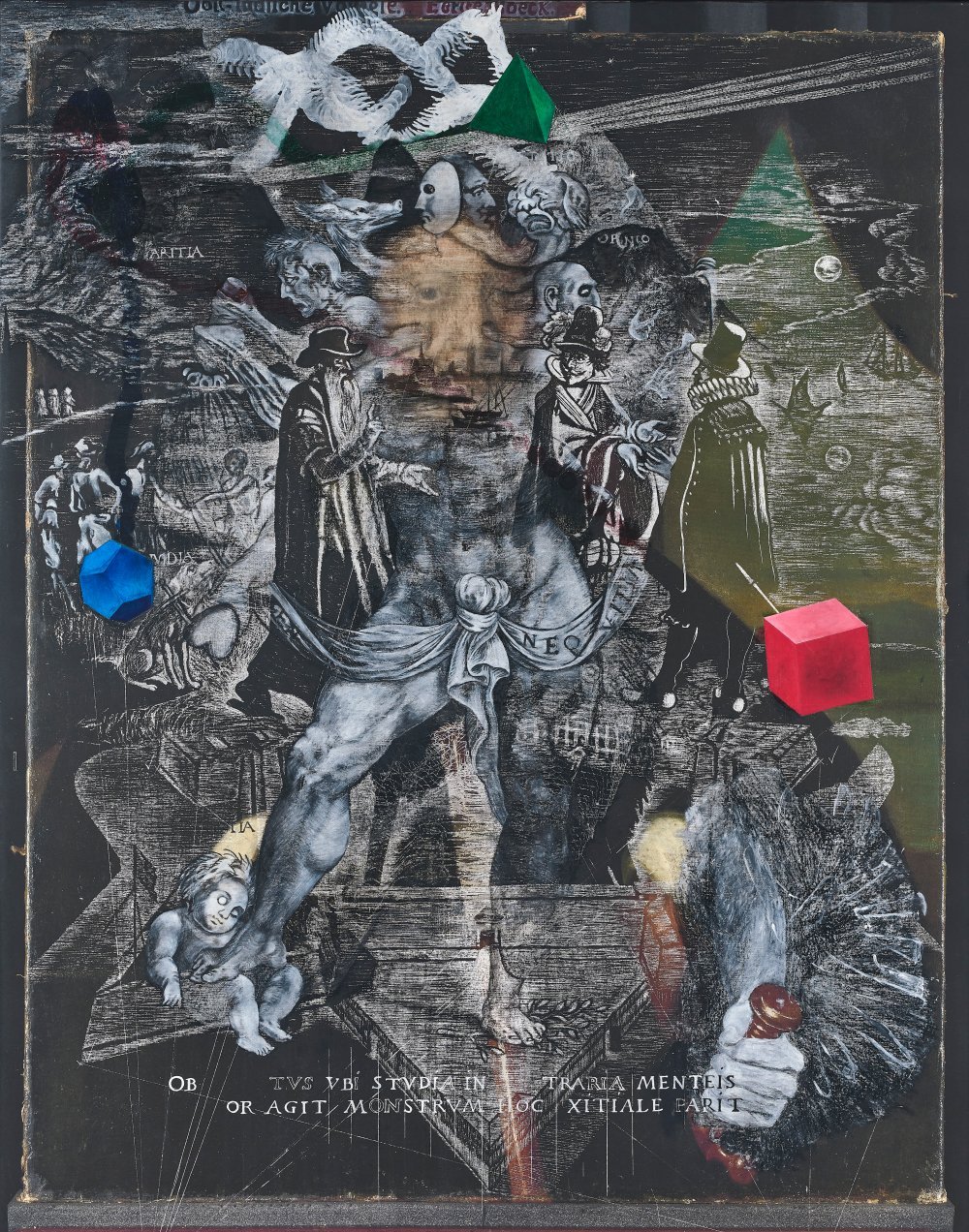 Mikhael Subotzky
The Dutch Gangster I, 2022 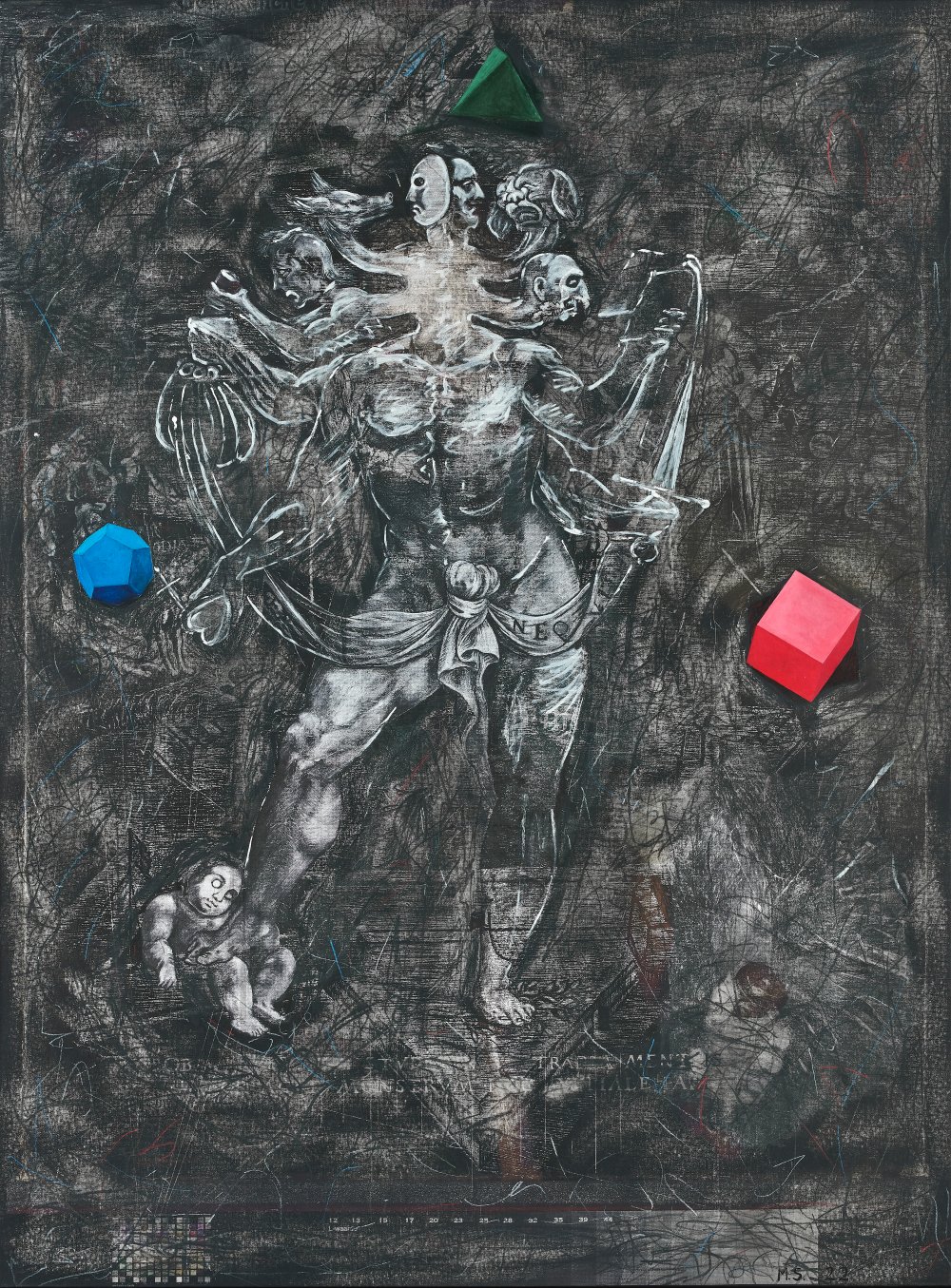 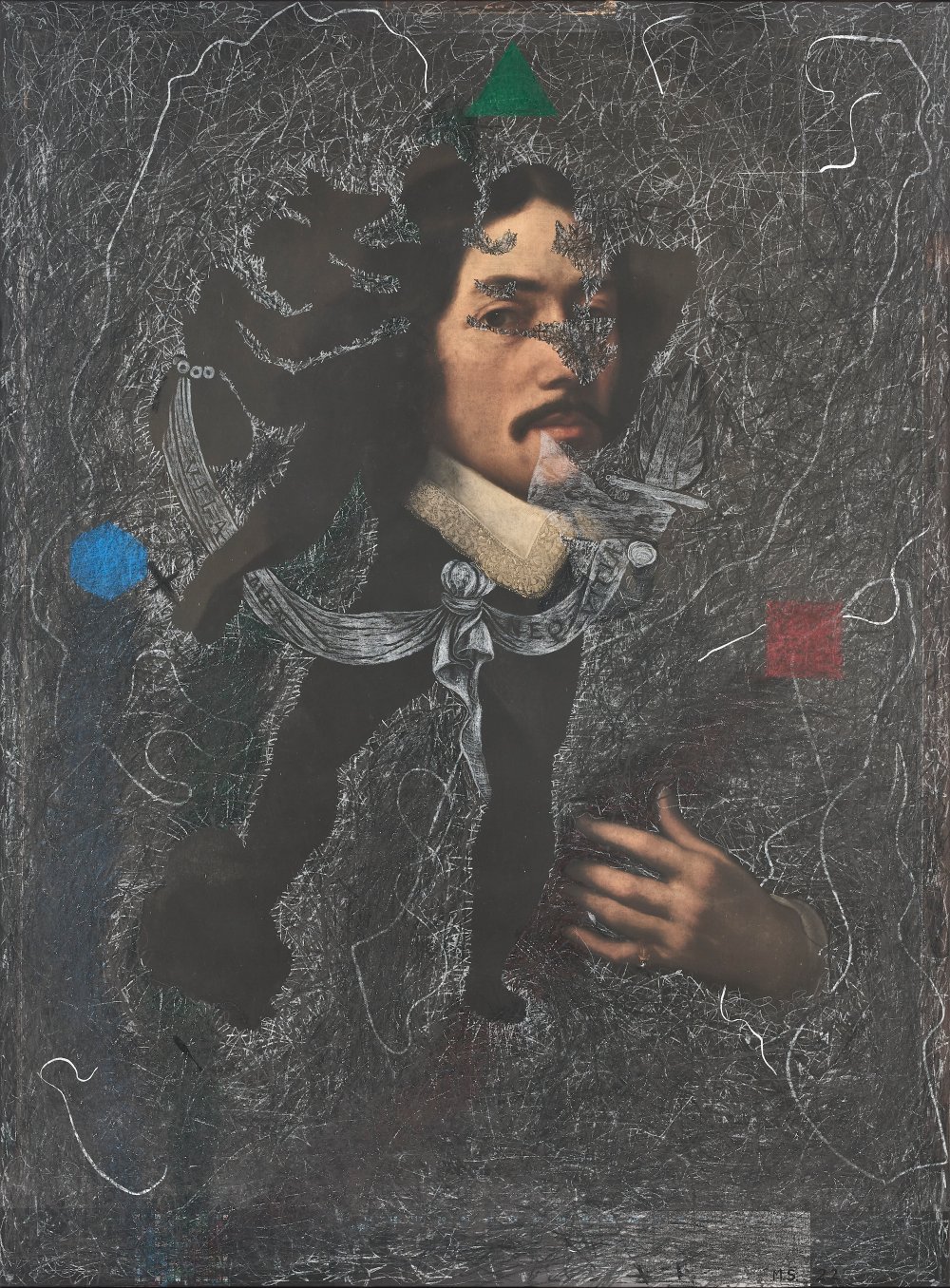 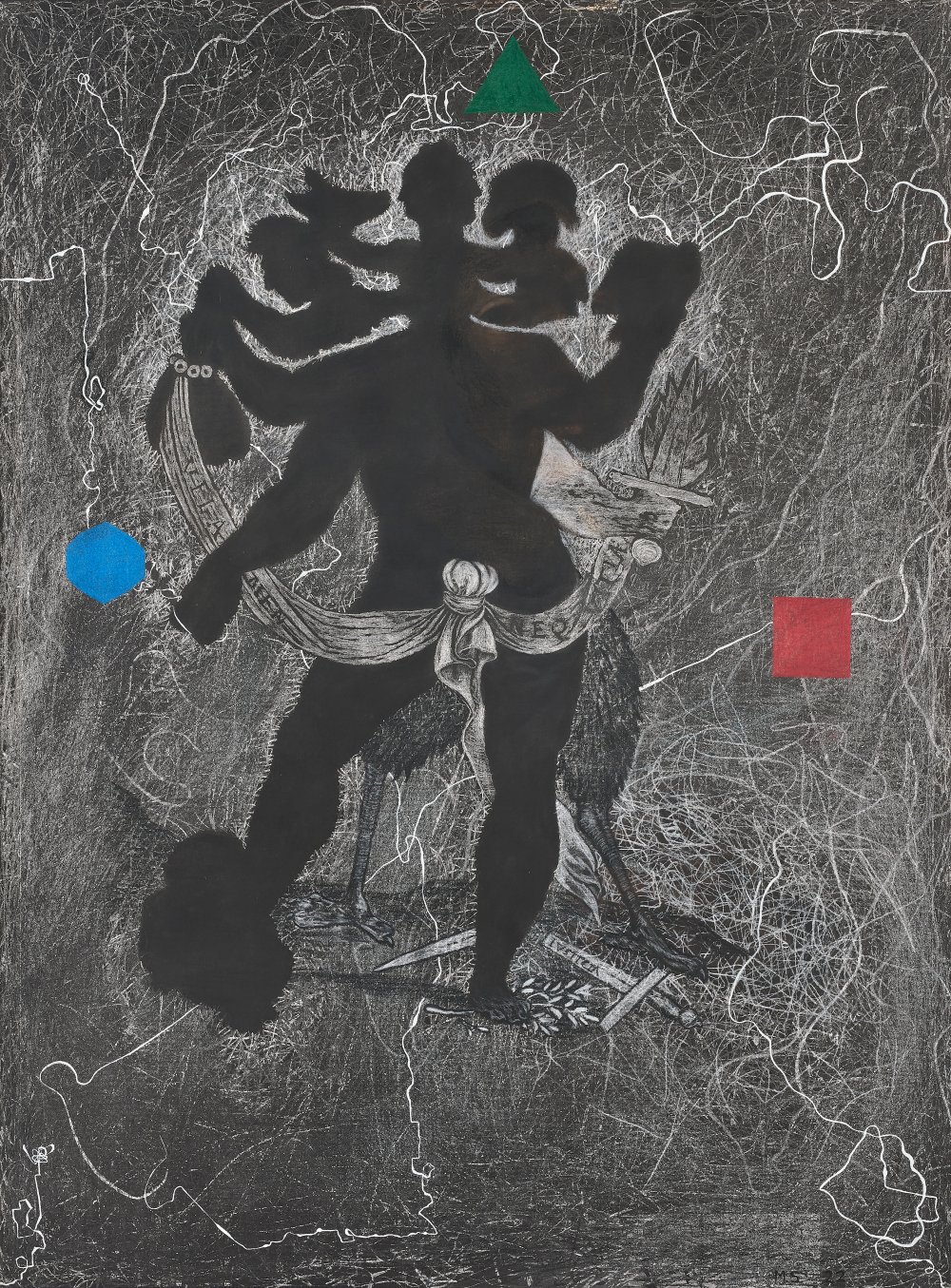 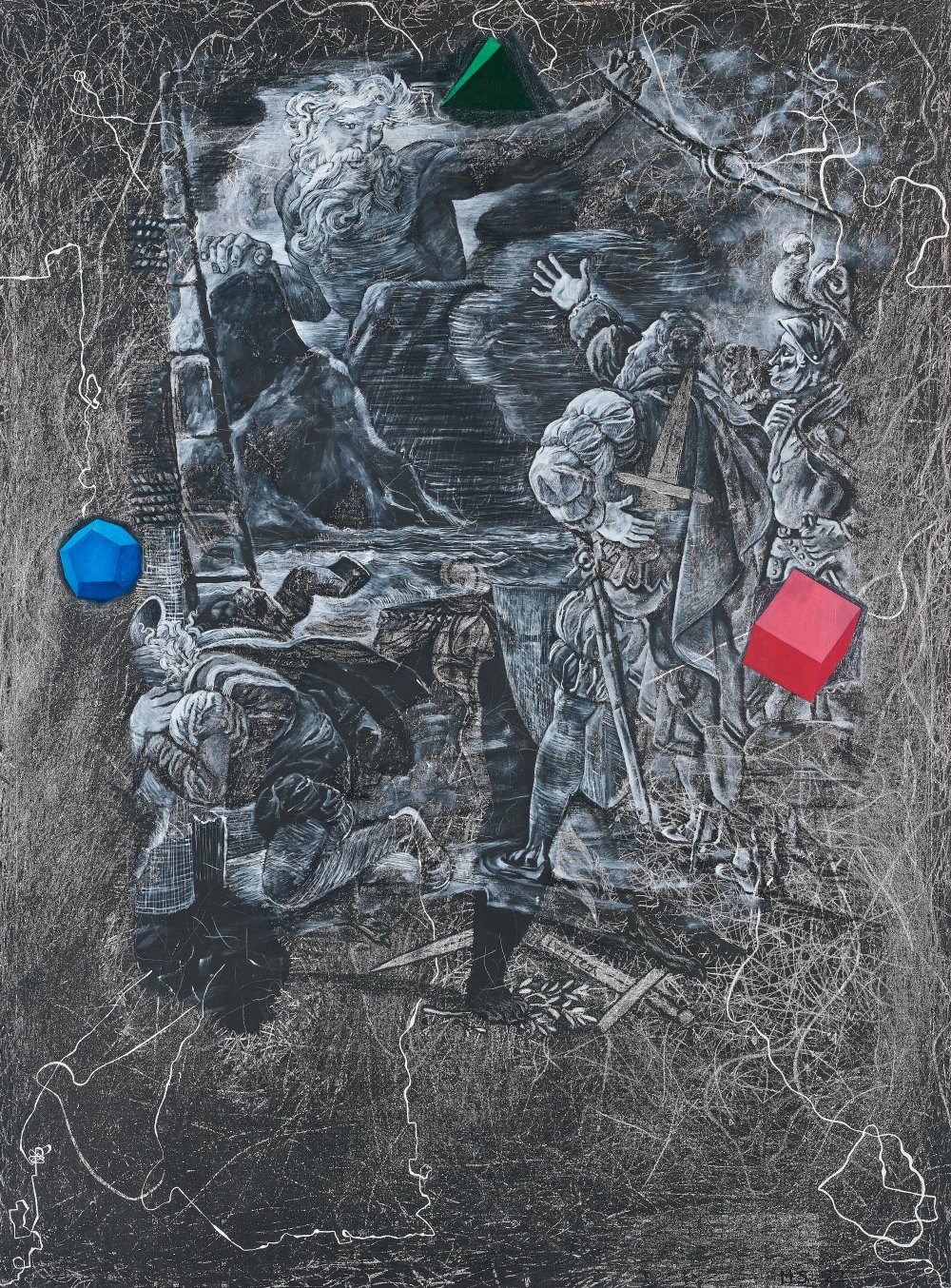 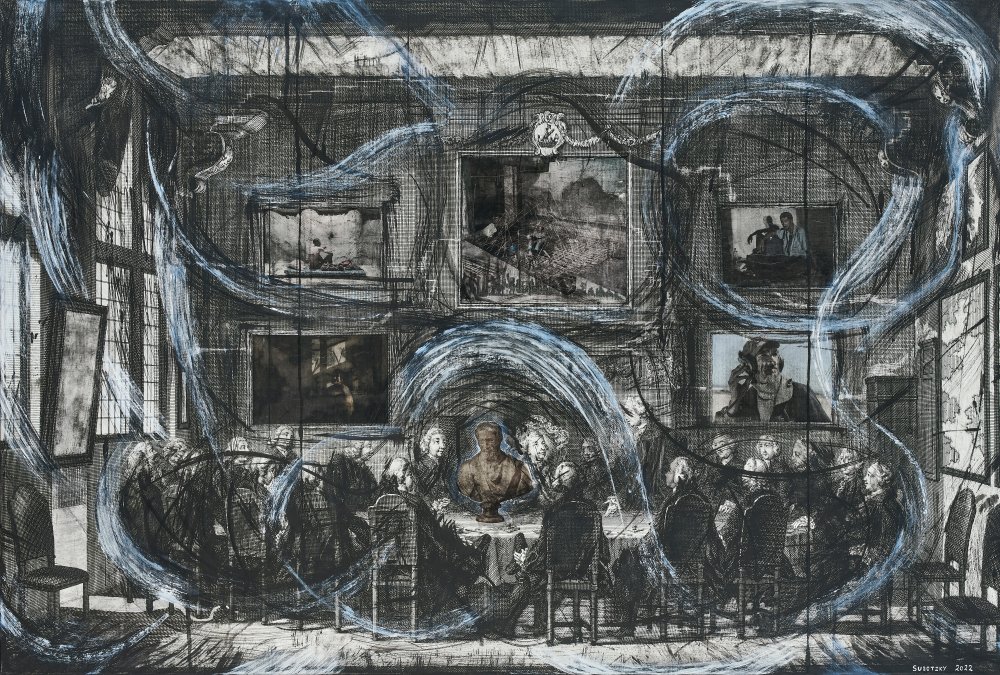 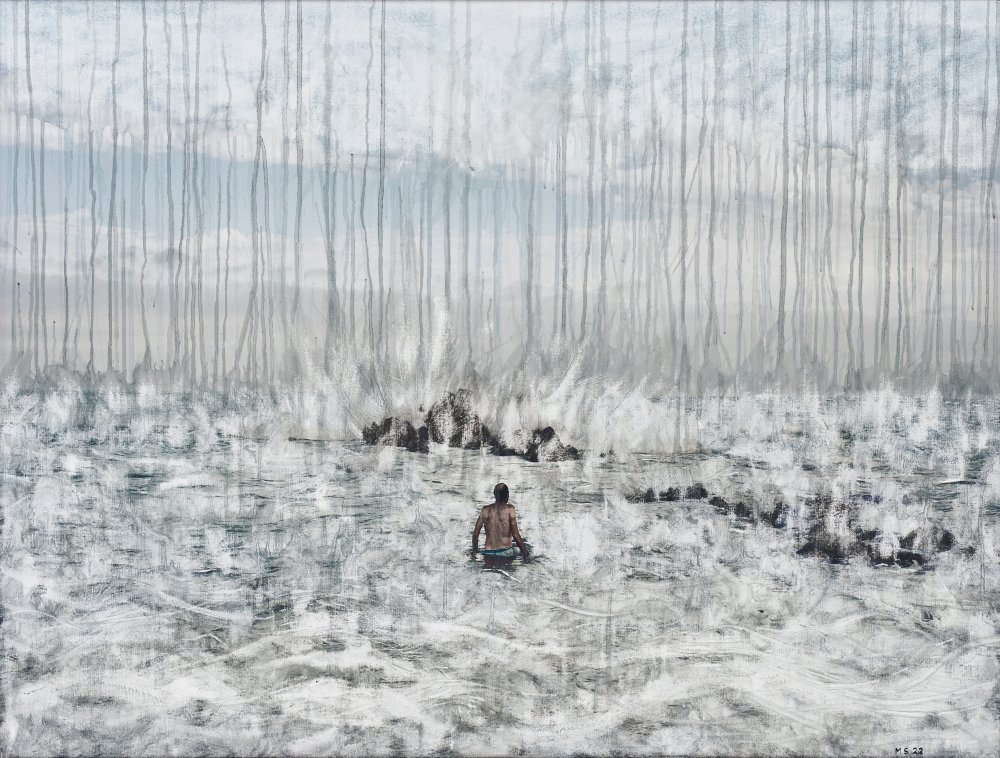 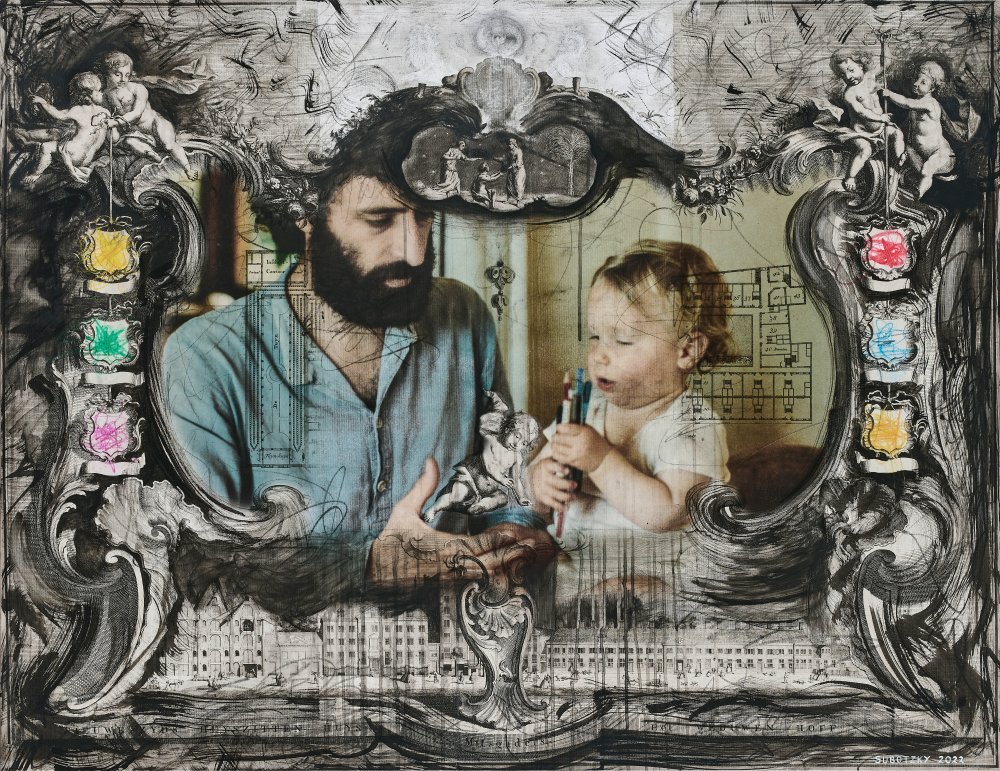 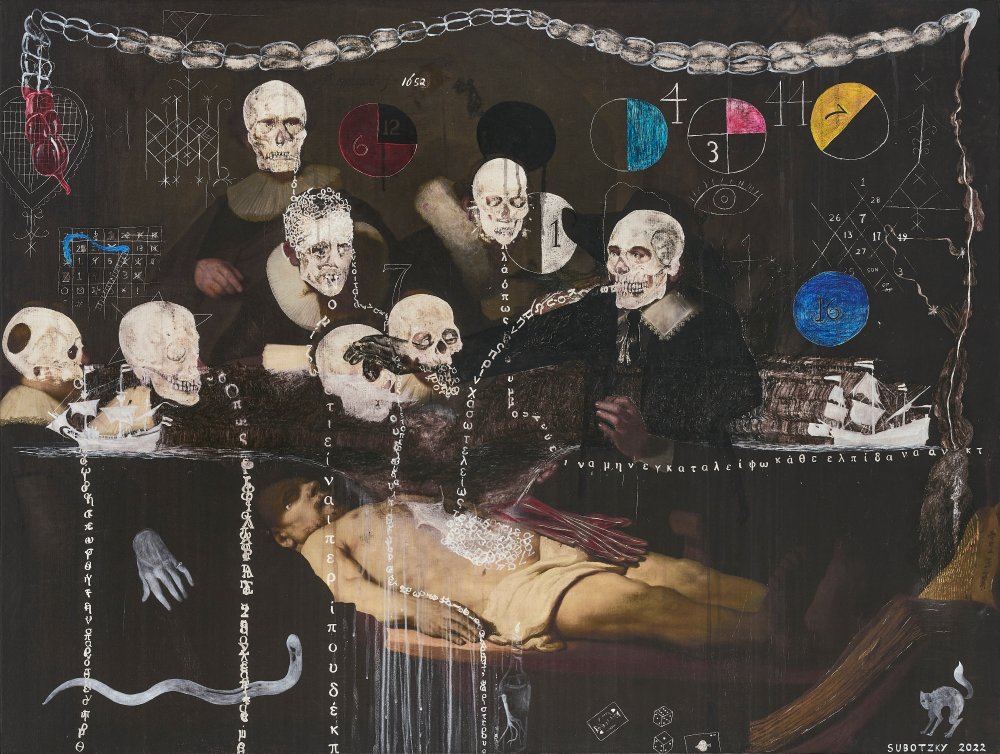 Mikhael Subotzky
Assume the aspect (of the dead man), 2022 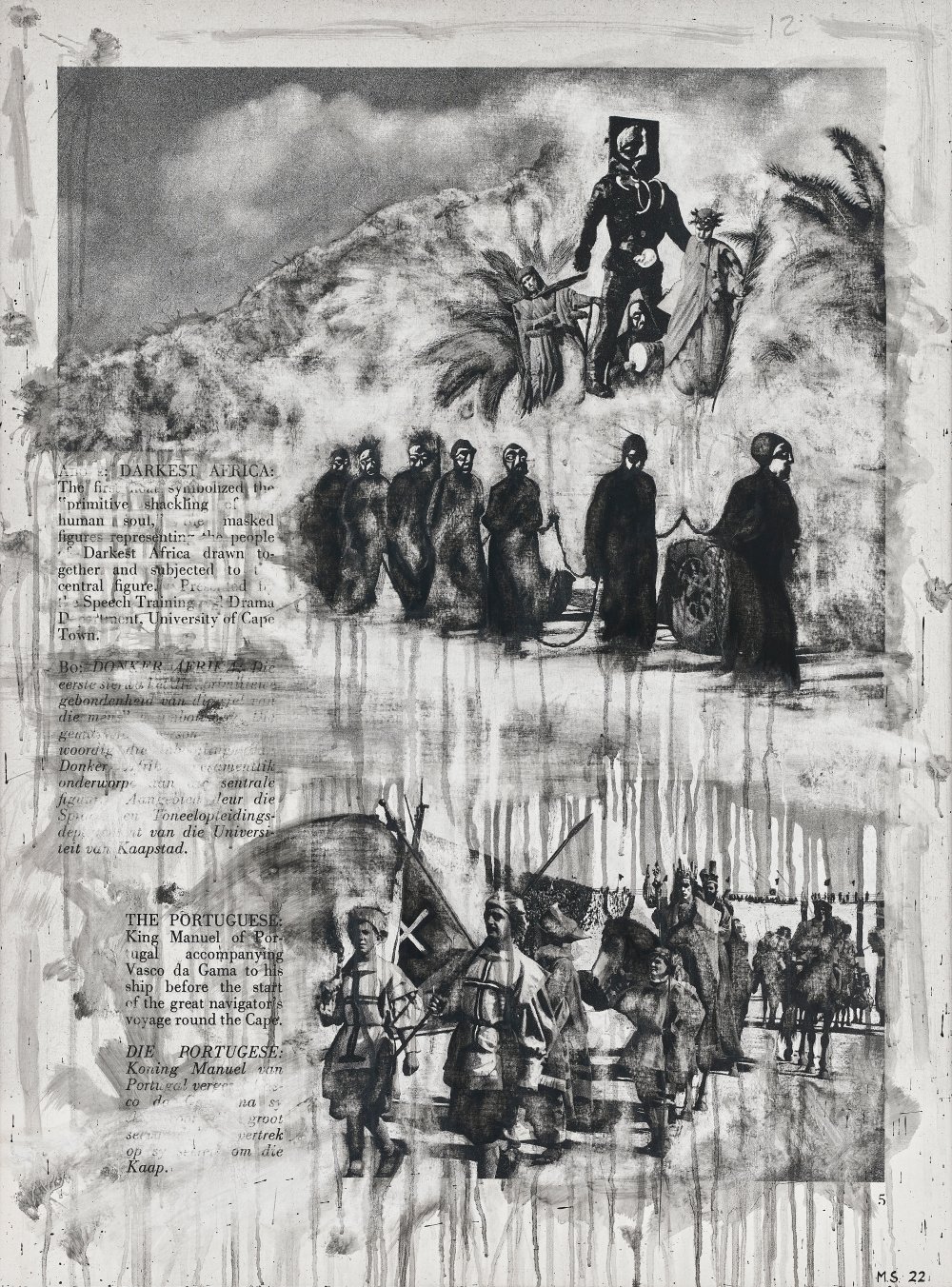 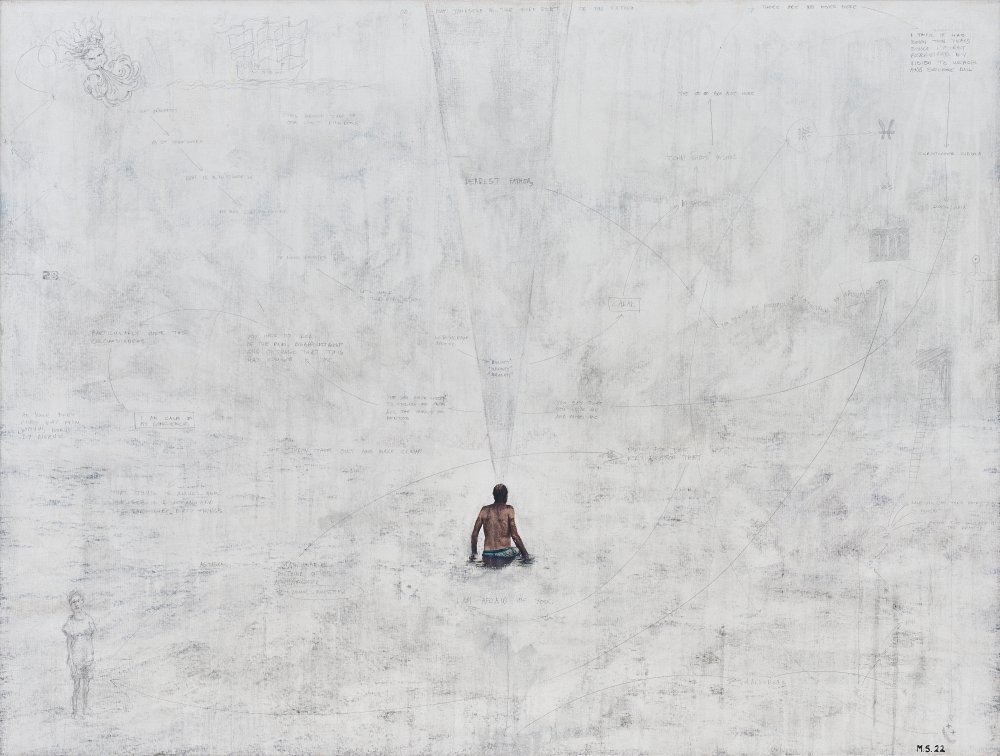 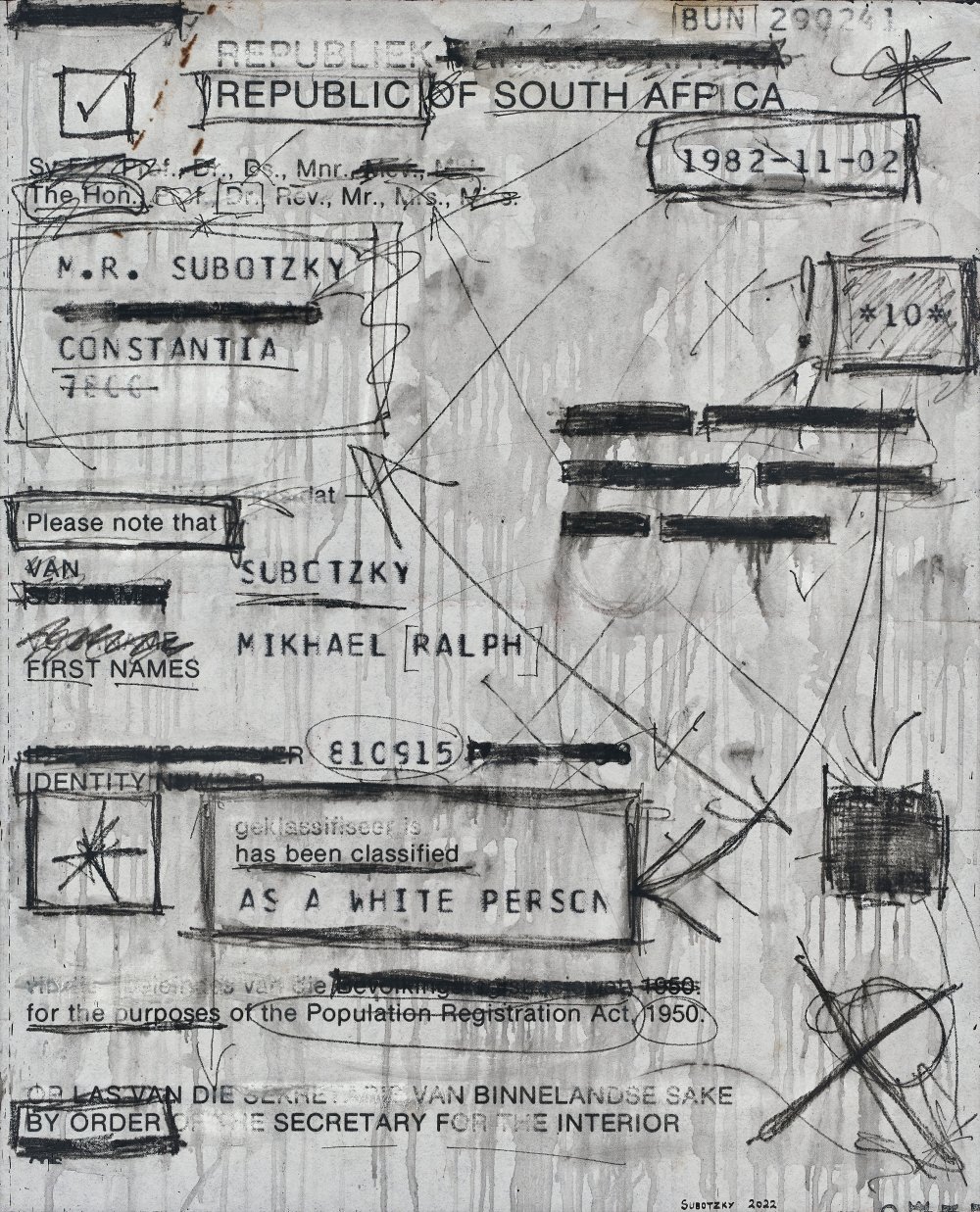 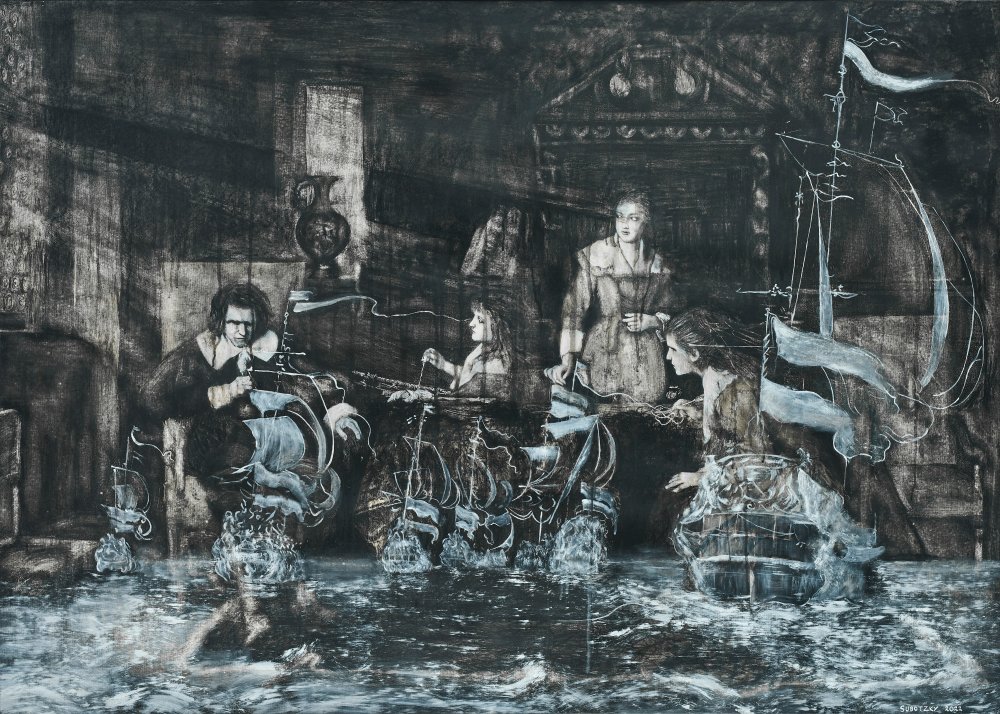 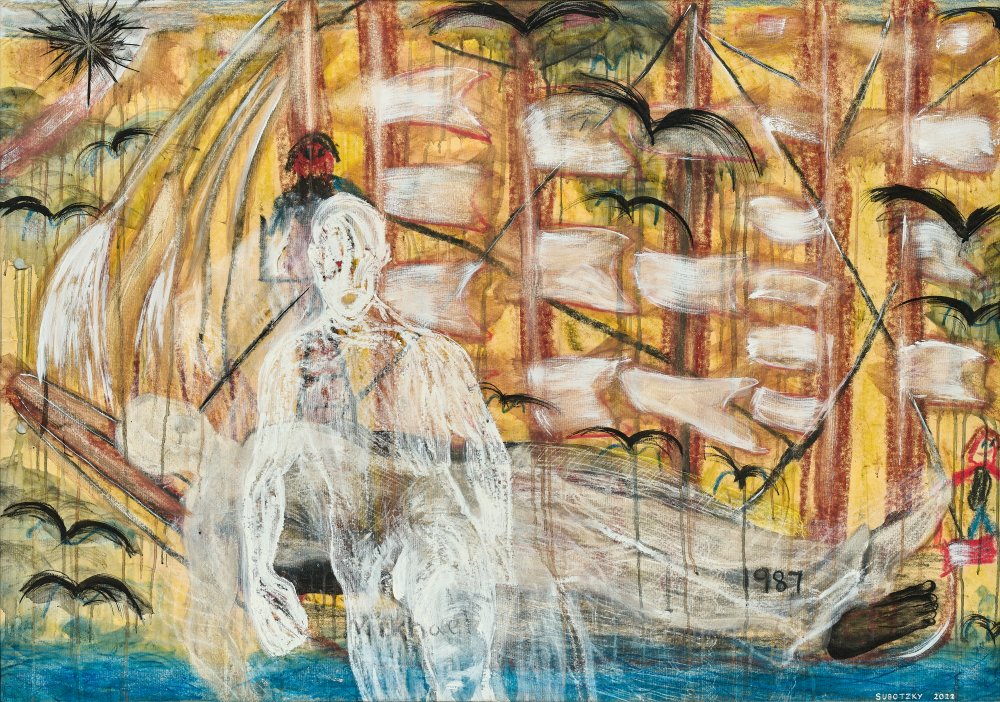 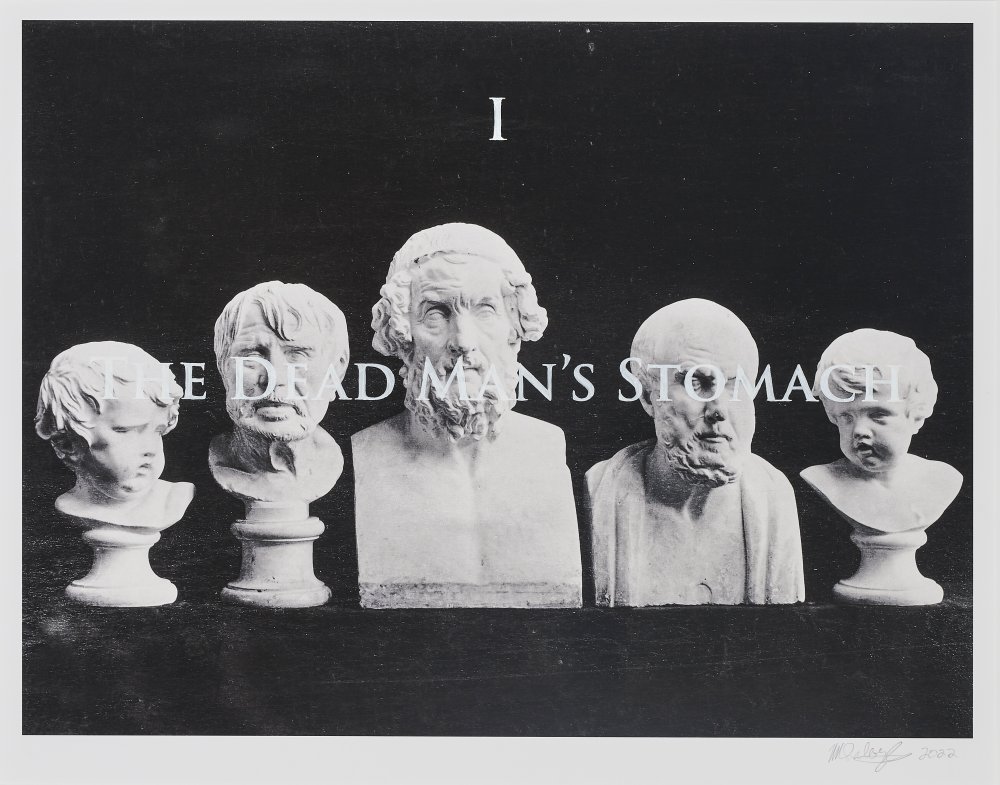 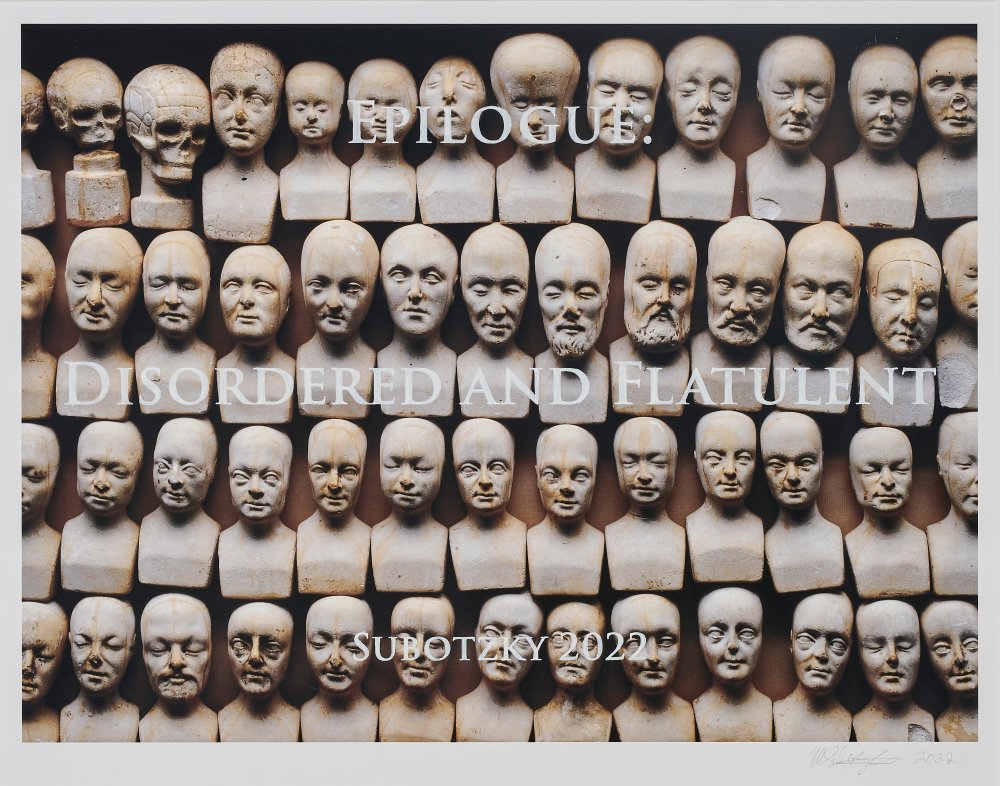 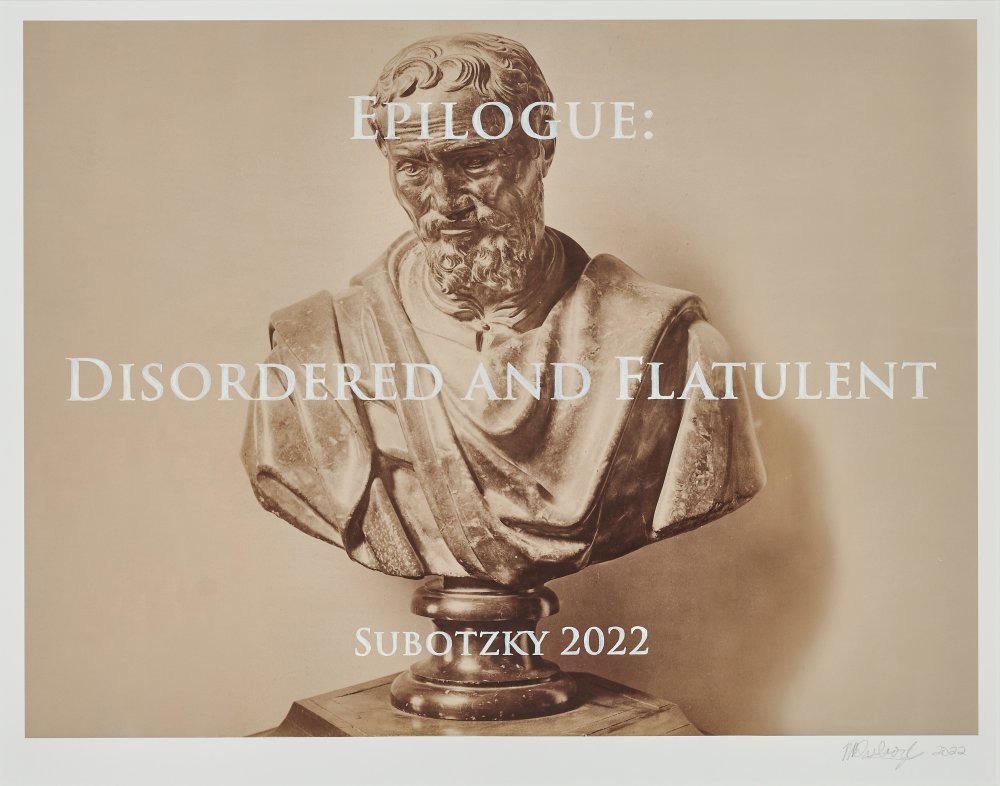 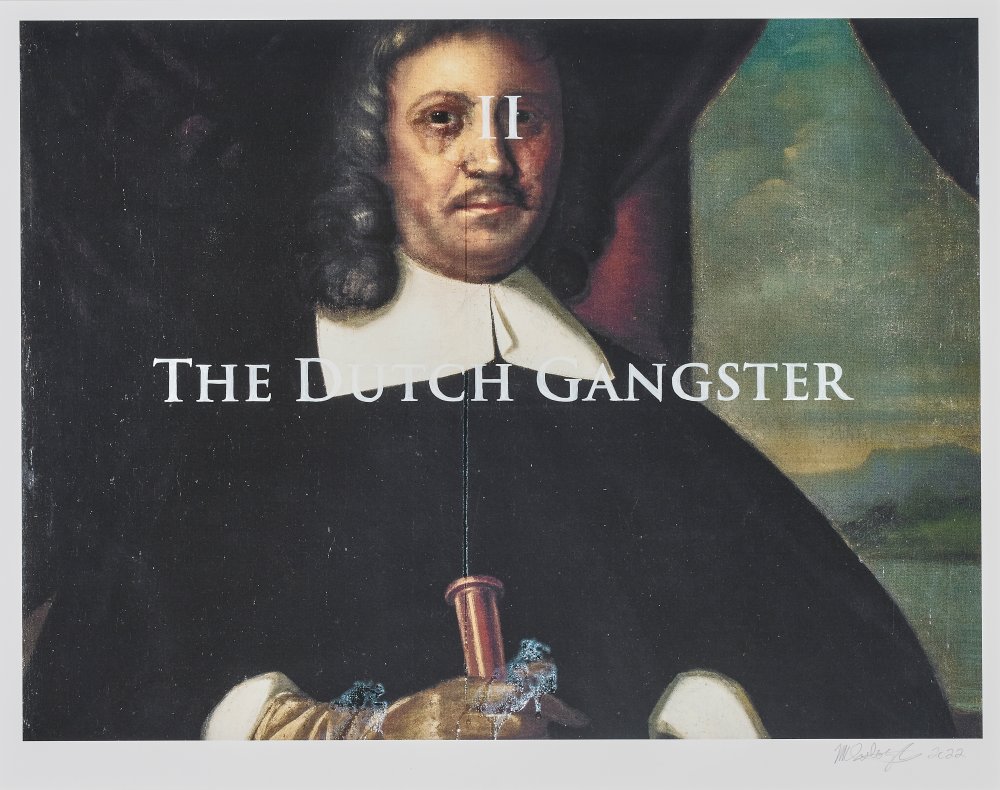 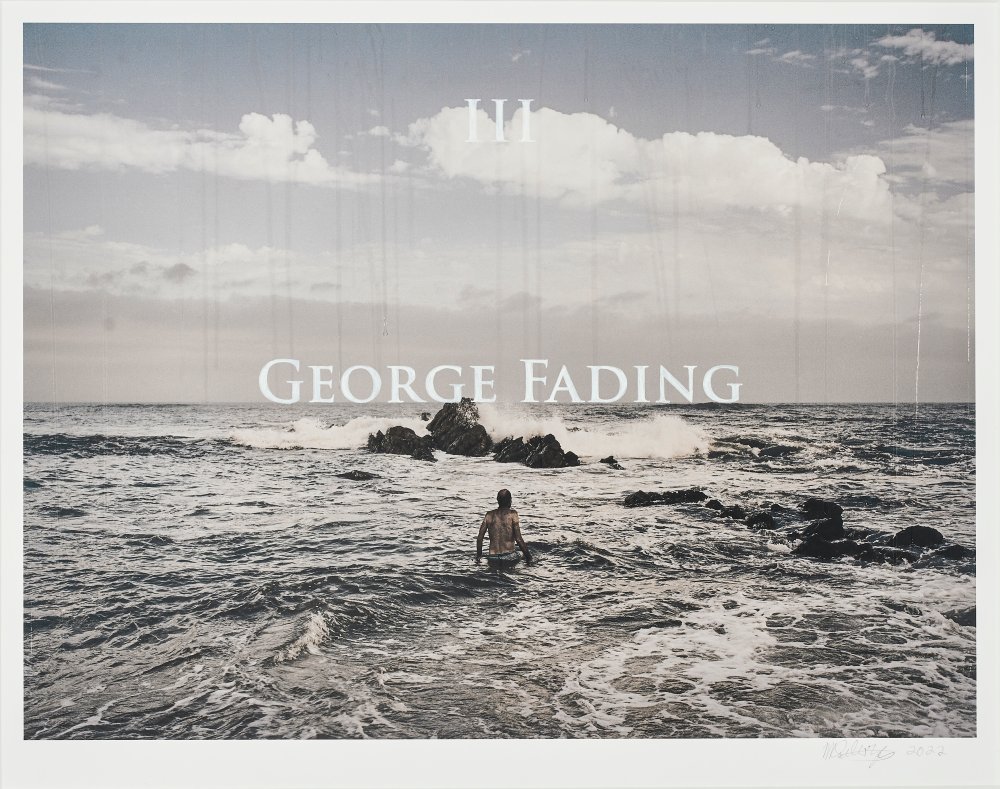 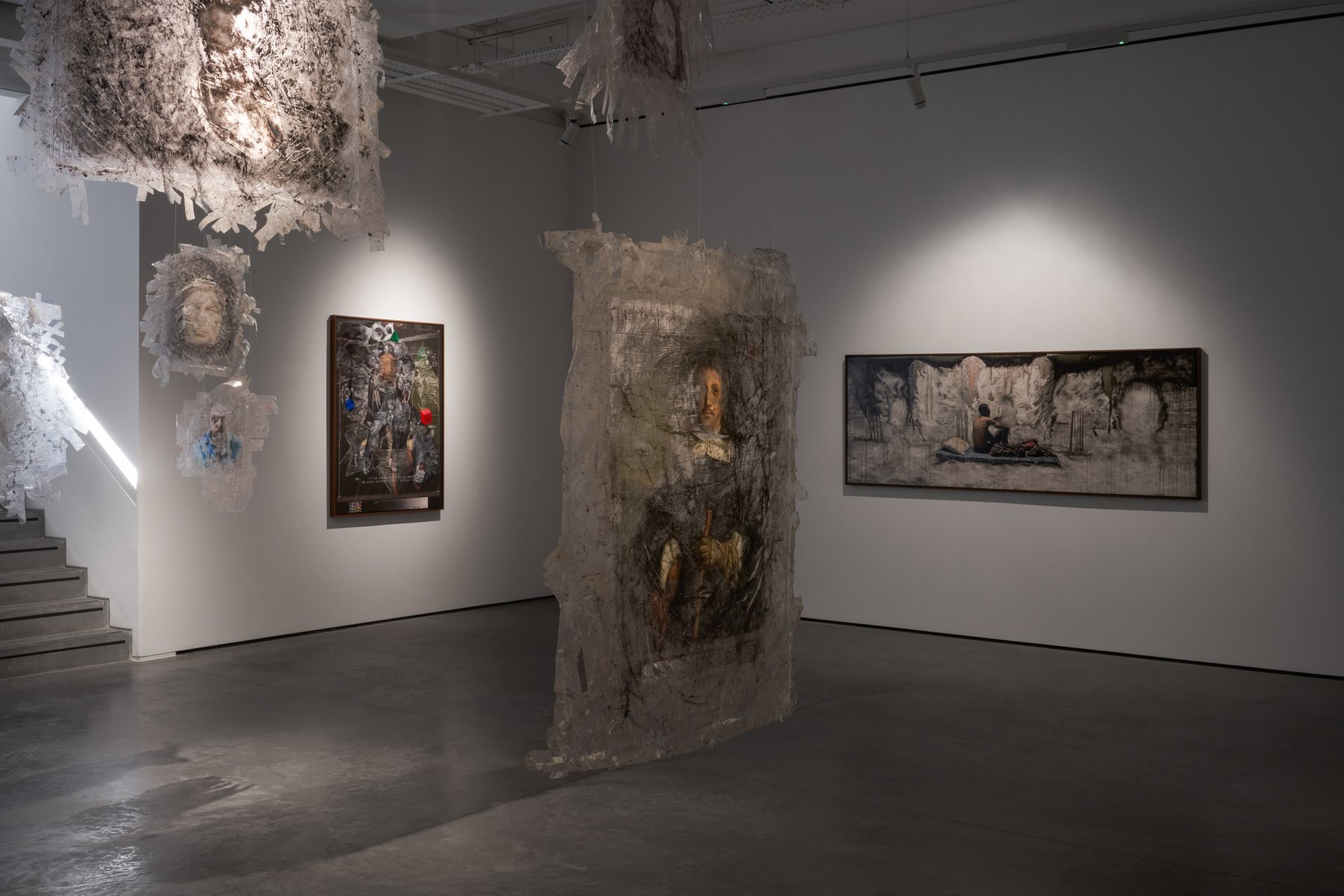 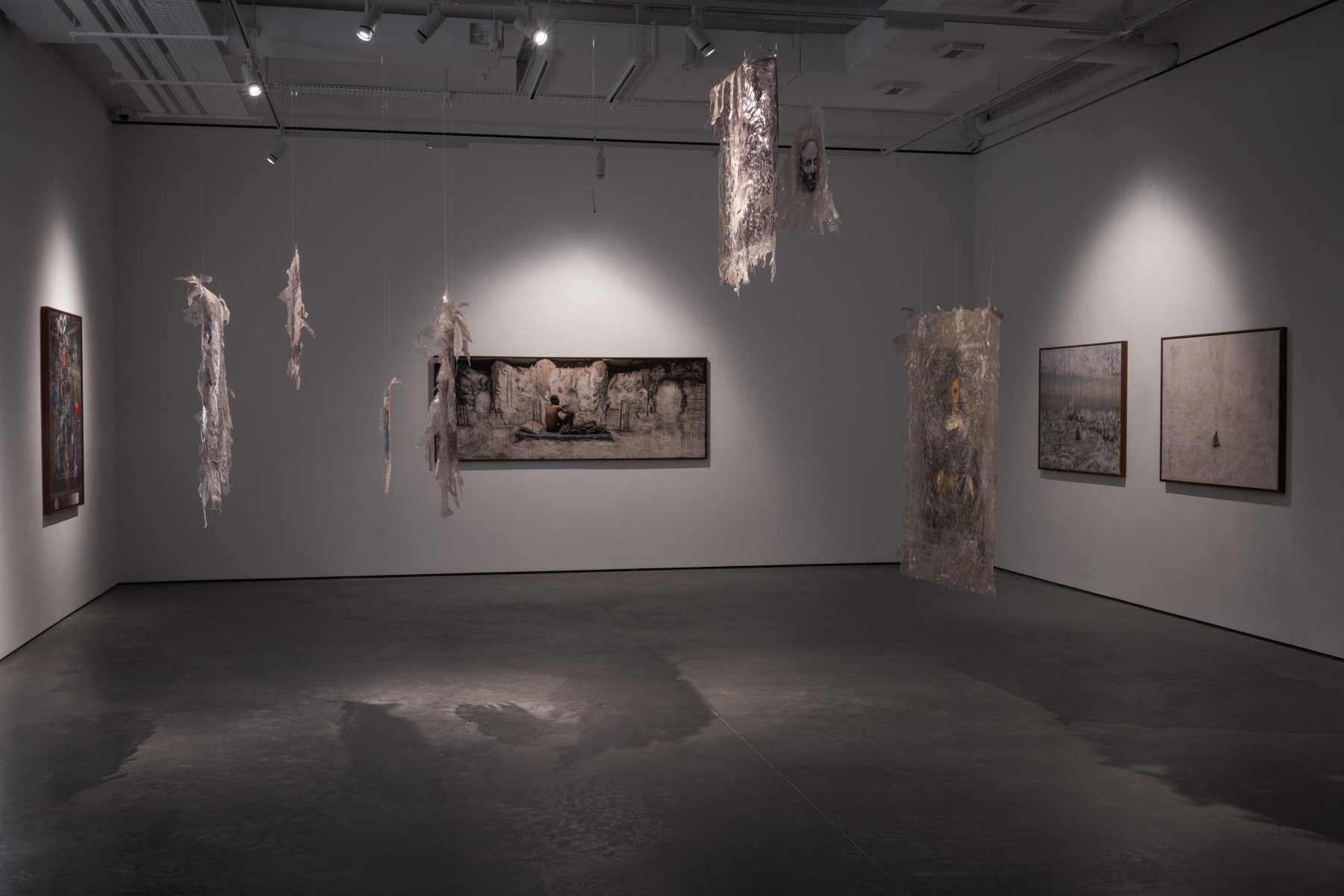 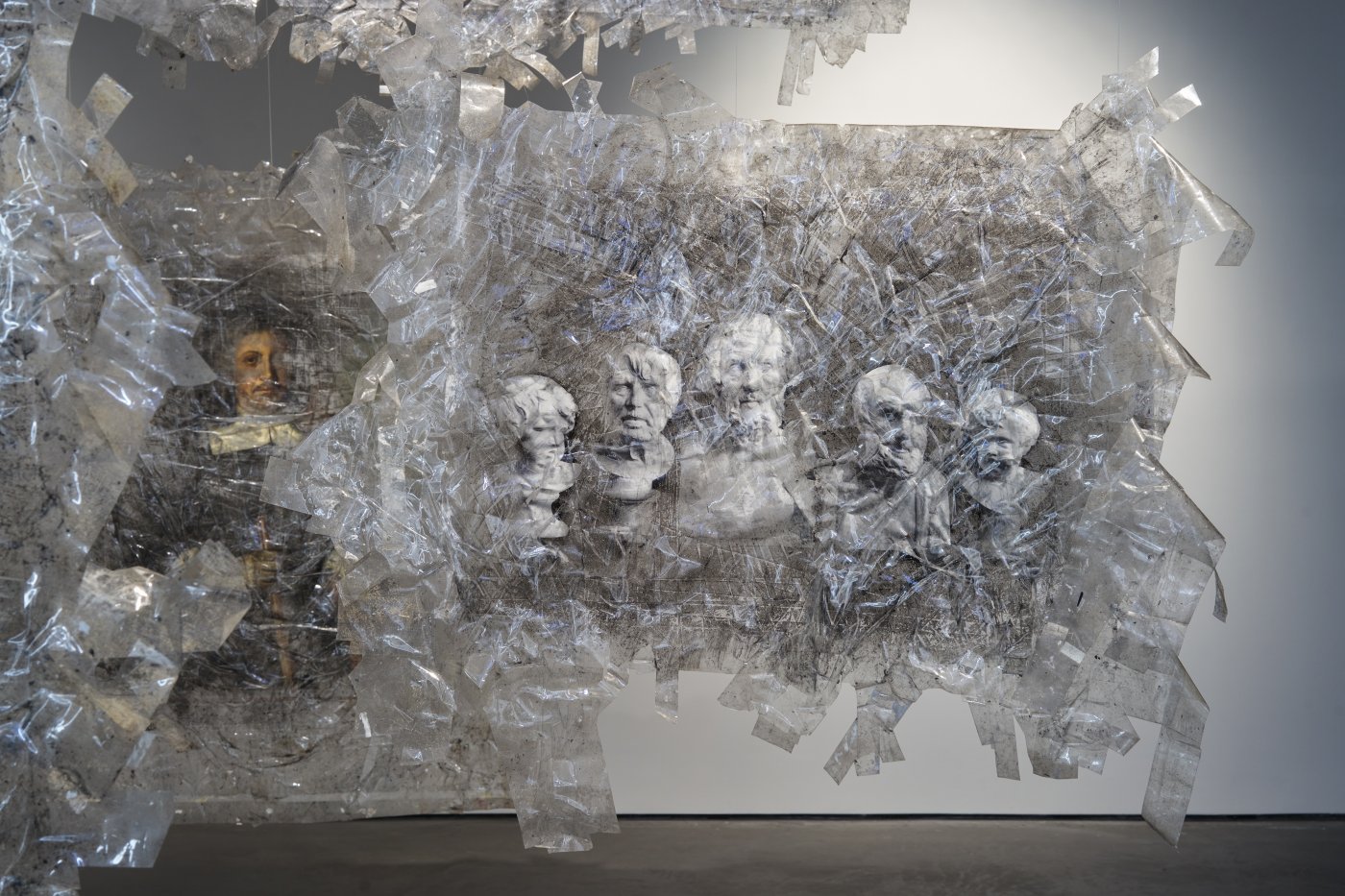 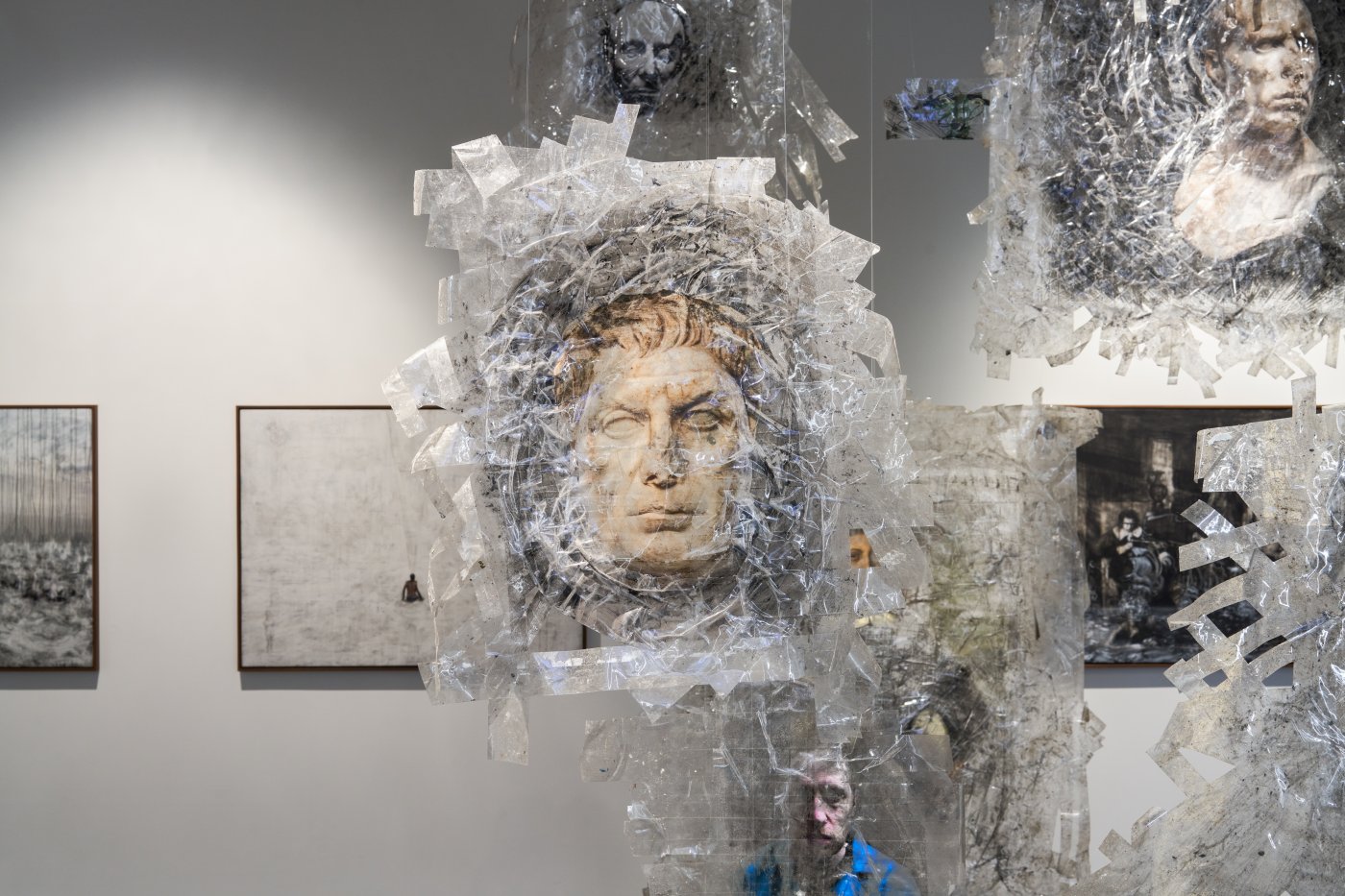 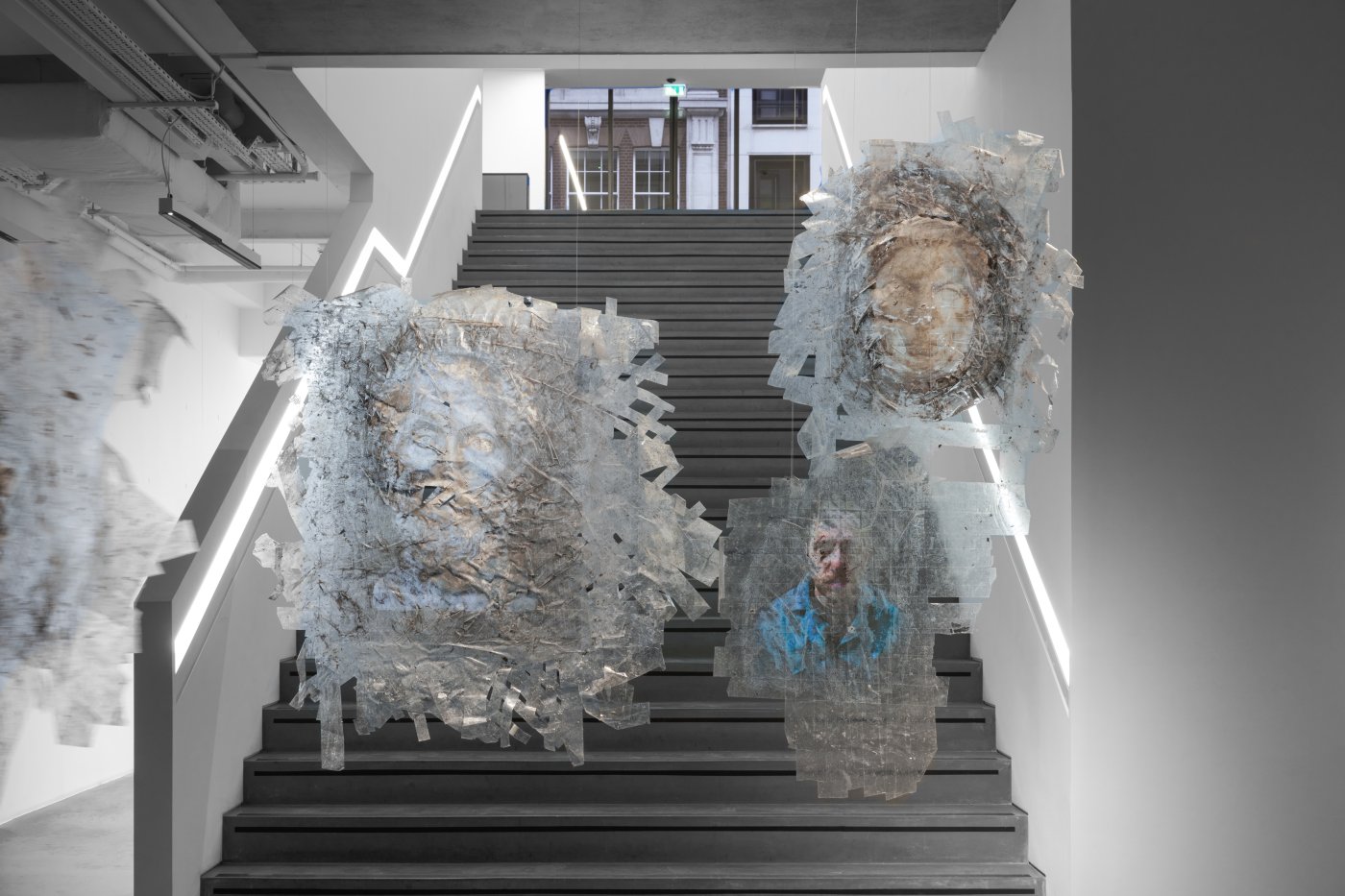 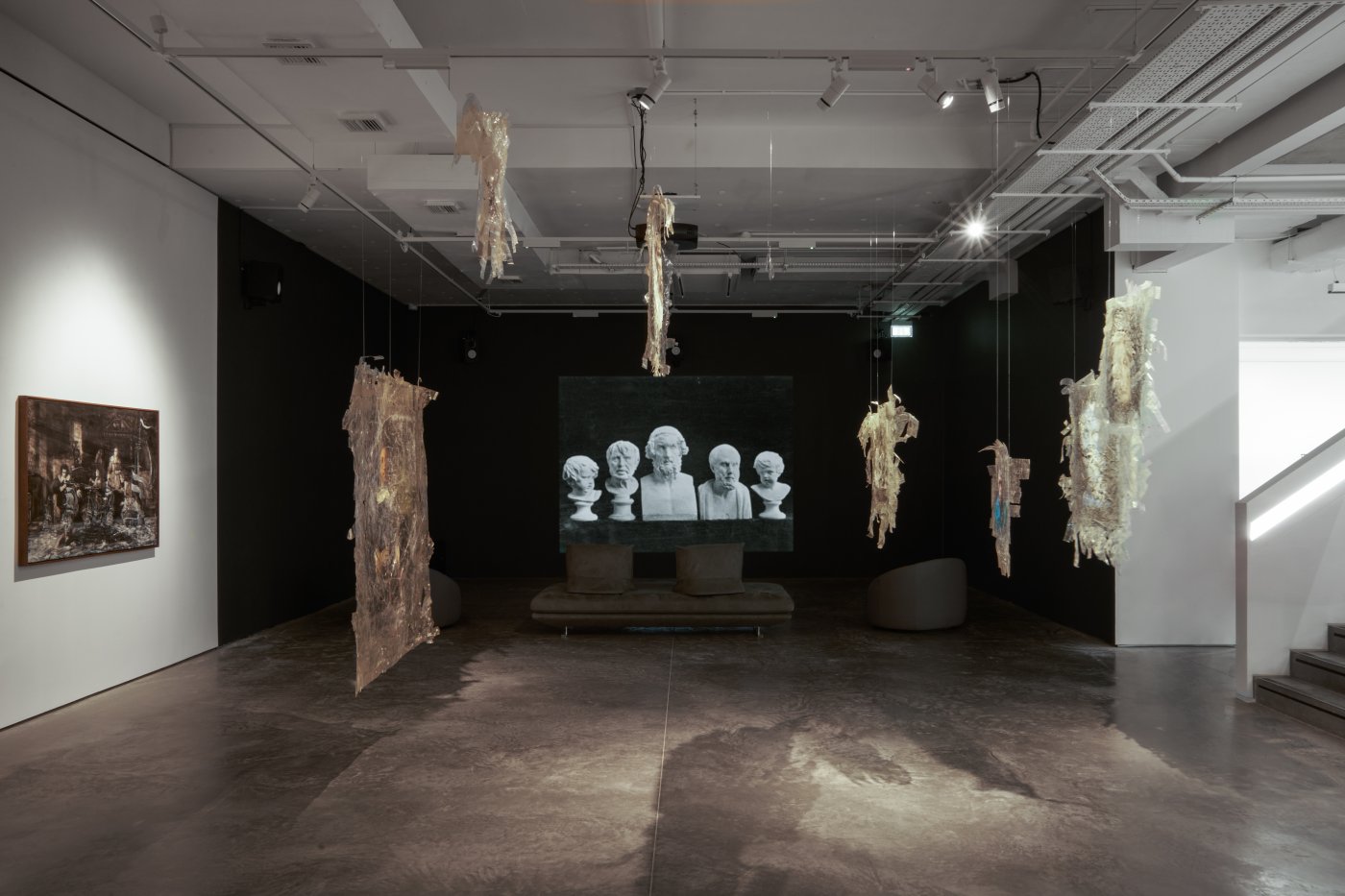 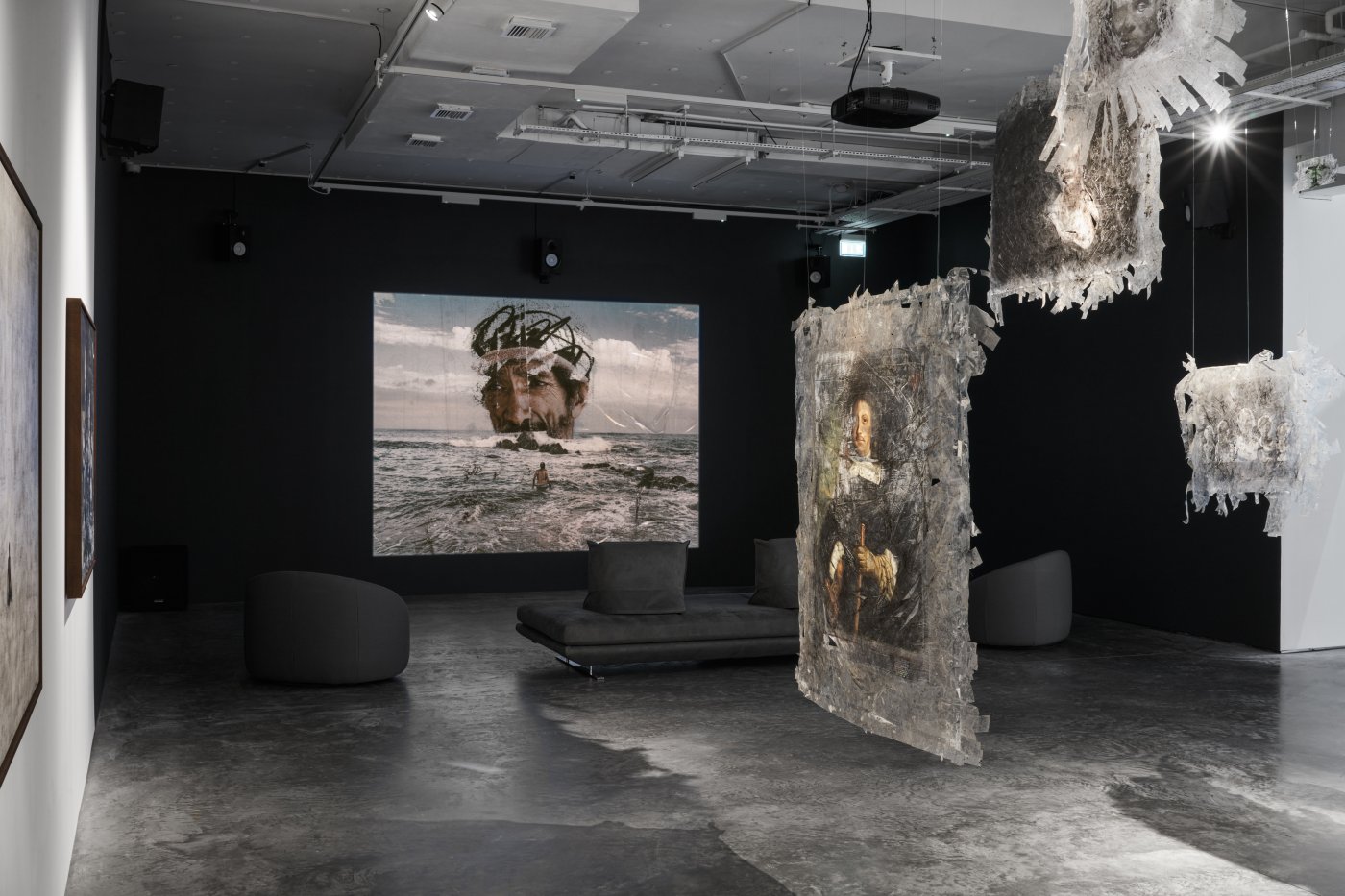 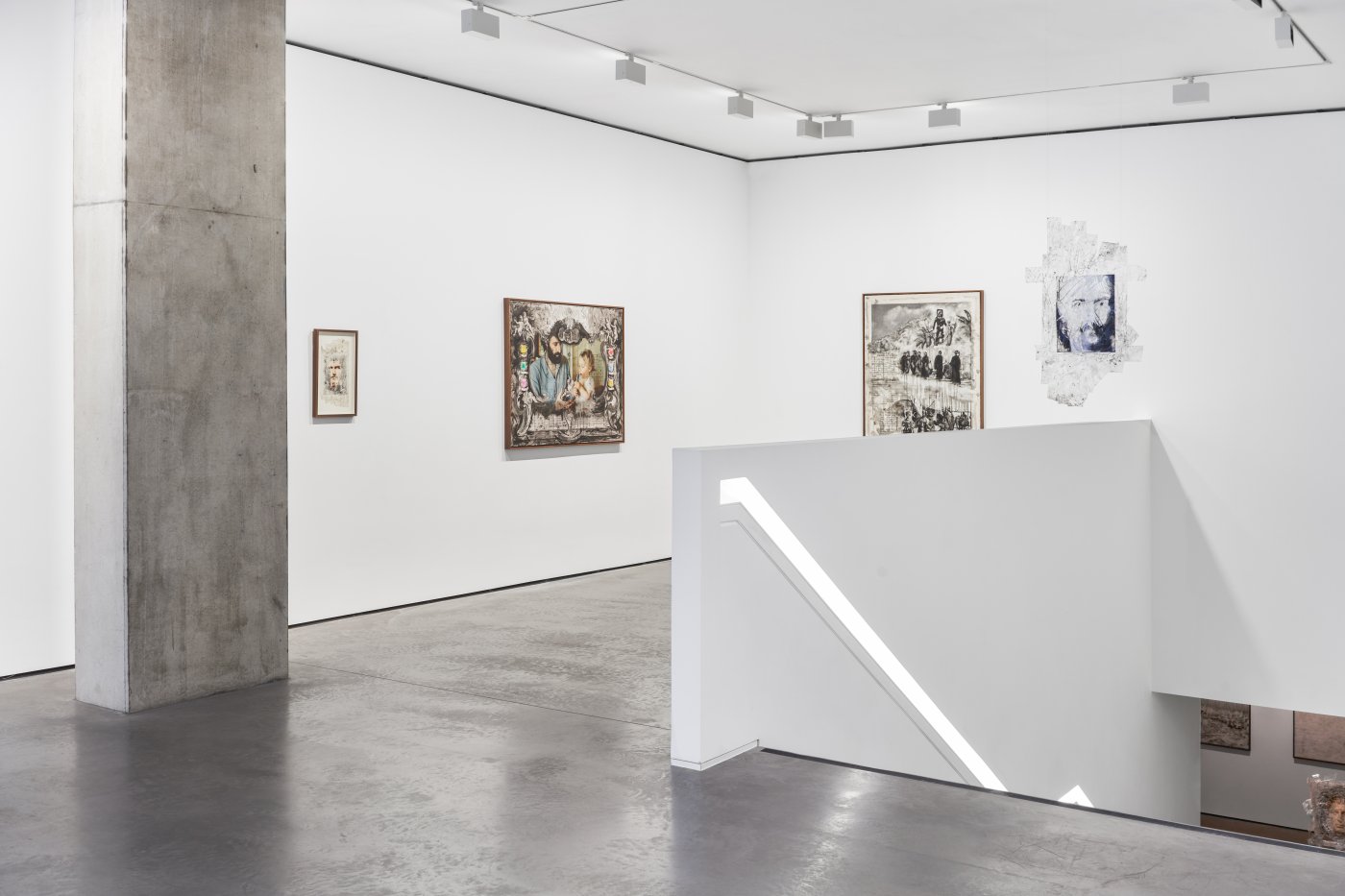 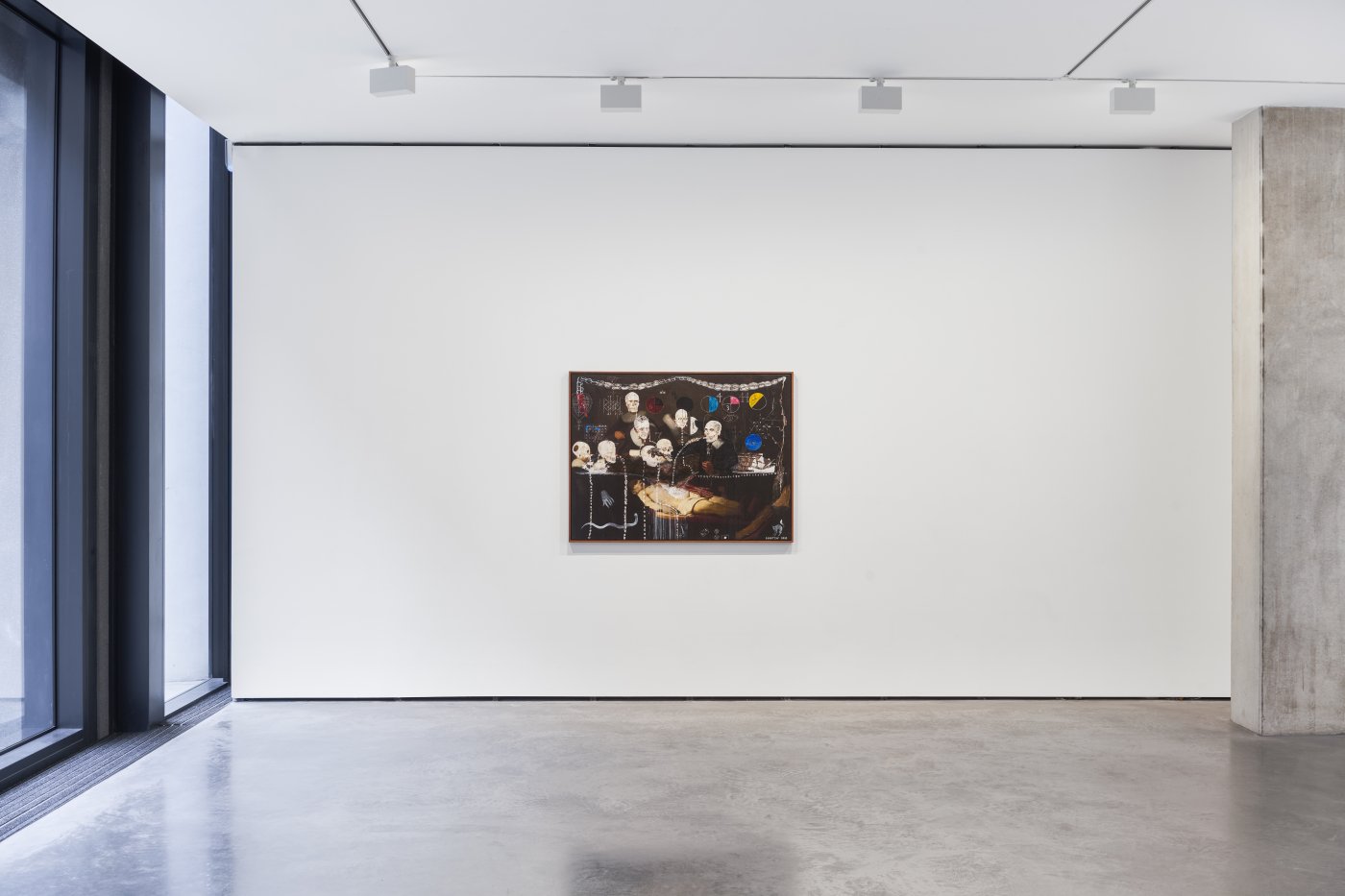 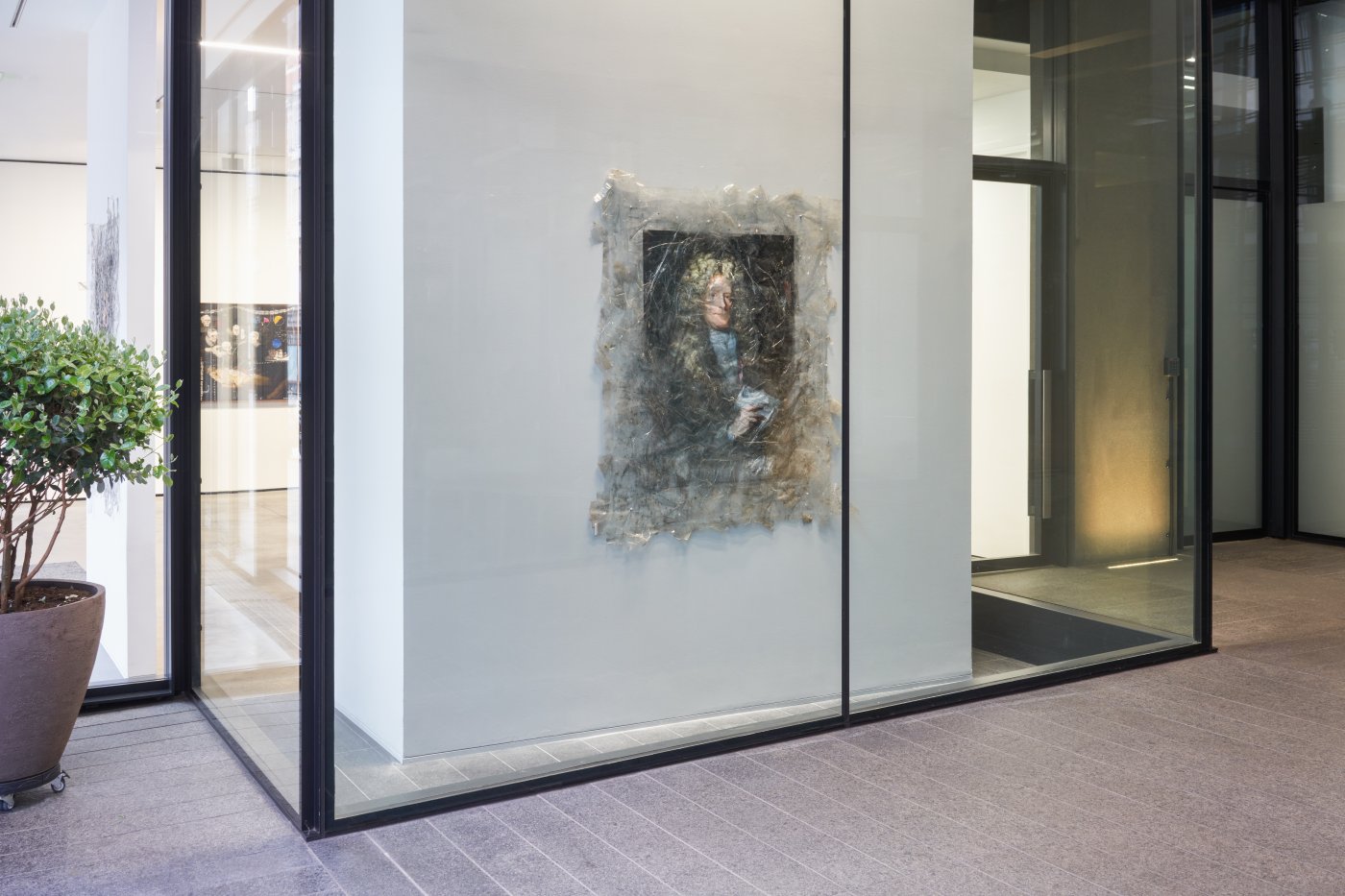 The centrepiece of the exhibition is a new film, titled Epilogue: Disordered and Flatulent (2022), which is the third in a trilogy of films following Moses and Griffiths (2007) and WYE (2012). Accompanying it are a series of paintings and sticky-tape transfers that were products of the film’s animation process, before evolving on their own terms.

Divided into four chapters and underpinned by a libretto written by Subotzky in 2020 and a score by Jonathan M. Blair, Epilogue: Disordered and Flatulent engages patriarchy’s shapeshifting ability to pass violence on from generation to generation. The film departs from the 17th century – a moment when the so called “Dutch Golden Age” and “Enlightenment” in Europe coagulate with the international slave trade, imperialist extraction, and the colonisation of South Africa. Subotzky is interested in how the art and literature at the time, through the 20th century and into the present moment, have both reflected and actively contributed to the colonial project. Interweaving the greater historical and political narrative of the film are two highly personal narratives that grapple with Subotzky’s relationship with his own father, and a man called Hermanus.

Chapter one sees a reworking of Rembrandt’s ‘The Anatomy Lesson of Dr. Tulp’ which intuitively leads to the Dutch ships sailing out of the ‘Dead Man’s Stomach’ and towards The Cape of Good Hope. Chapter two, titled ‘The Dutch Gangster’ is based on dual representations of the “real” and “fake” Jan van Riebeeck, one of which, erroneously attributed and depicting another man, found its way on to the apartheid currency as he was canonised as the “father of the nation” by the white nationalist agenda.

Chapter three, titled ‘George Fading’ is a short interlude based on a photograph Subotzky took of his father walking into the sea during the early stages of motor neurone disease, and an account of his later funeral. The final chapter is the ‘Chorale’, in the style of a traditional cantata, where the film’s themes are brought together and recapitulated and its images are reorganised into a summary and provocation.

Epilogue features Hermanus van Wyk, an important collaborator in Subotzky’s work since 2005. The complexity of their relationship that reflects a history of fraught class and race relations in South Africa is engaged in their conversation. Hermanus has made a journey with Subotzky, from an initial chance encounter and documentary photograph to playing a role in WYE (2012) as a fictional character loosely based on himself. In Epilogue Hermanus tells his own story in excerpts from a three day conversation with Subotzky that was filmed in the winter of 2021 and are interspersed throughout the chapters of the film. In tandem with Subotzky’s personal narrative and placed within the charged historical context that the film addresses, these words form a powerful meditation on father figures, laced with violence, pain, and just a hint of the possibility of redemption.

Mikhael Subotzky’s works are the results of his fractured attempts to place himself in relation to the social, historical, and political narratives that surround him. As an artist working in film, video installation, and photography, as well as more recently in collage and painting, Subotzky engages critically with contemporary politics of representation. “At the heart of my work is a fixation with revealing the gap between what is presented (and idealised) and what is hidden, coupled with a desire to pull apart and reassemble the schizophrenia of contemporary existence,” he says. Subotzky was born in 1981 in Cape Town, South Africa, and is currently based in Johannesburg.

In 2020 Subotzky was named in Apollo’s 40 Under 40 Africa list as one of four artists from the African continent or diaspora who are transforming the way that art is made and experienced. Subotzky’s work also featured in the recent Tate publication Photography Now (2020) by Charlotte Jansen and in recent international exhibitions, including From Moment to Movement: Picturing Protest in the Kramlich Collection at the Manetti Shrem Museum of Art at UC Davis, Masculinities: Liberation through Photography at the Barbican in London (2020), Witness: Afro Perspectives from the Jorge M. Pérez Collection, El Espacio 23, Miami, 2020 – 2021 and Global(e) Resistance, Centre Pompidou, Paris, 2020 – 2021.. His award-winning Ponte City project (co-authored with Patrick Waterhouse) was presented at Art Basel Unlimited in 2018. The full exhibition and archive of this project has since been acquired by the San Francisco Museum of Modern Art.

Subotzky’s work is collected widely by international institutions, including the Museum of Modern Art (New York), Solomon R Guggenheim Museum (New York), the National Gallery of Art (Washington), Tate (London), Centre Pompidou (Paris), the San Francisco Museum of Modern Art and the South African National Gallery, among others. Subotzky’s work was included in Lubumbashi (2013) and Liverpool (2012) biennials and Pixel Interface, a multi-component video installation, was included in All The World’s Futures, curated by Okwui Enwezor at the 56th Venice Biennale (2015).

Courtesy of the artist and Goodman Gallery, London