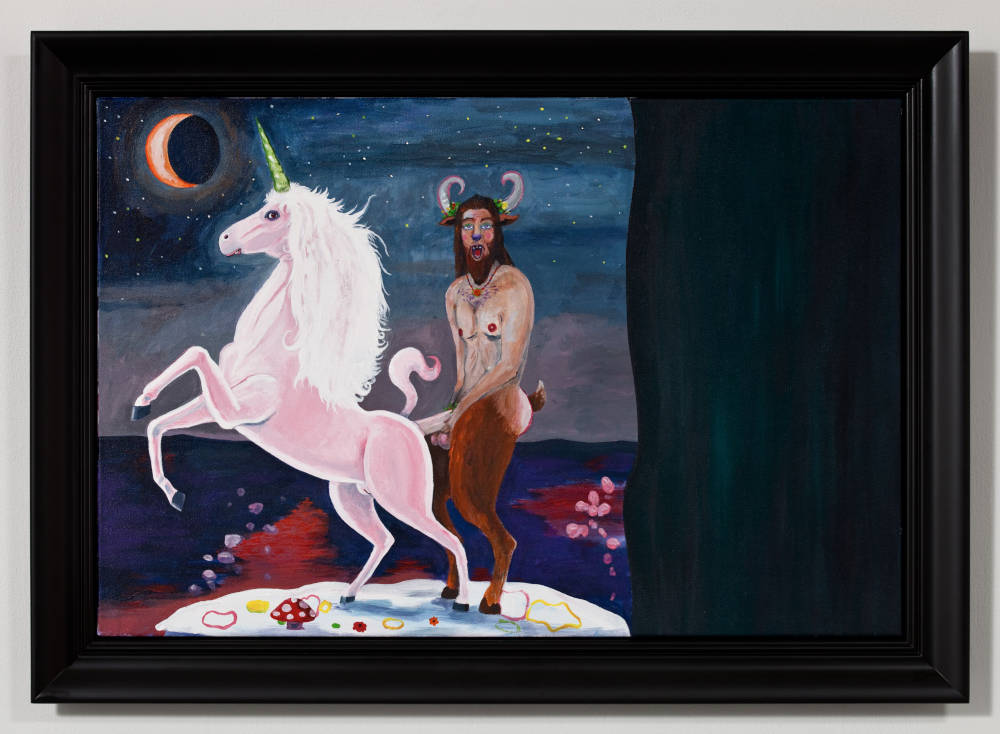 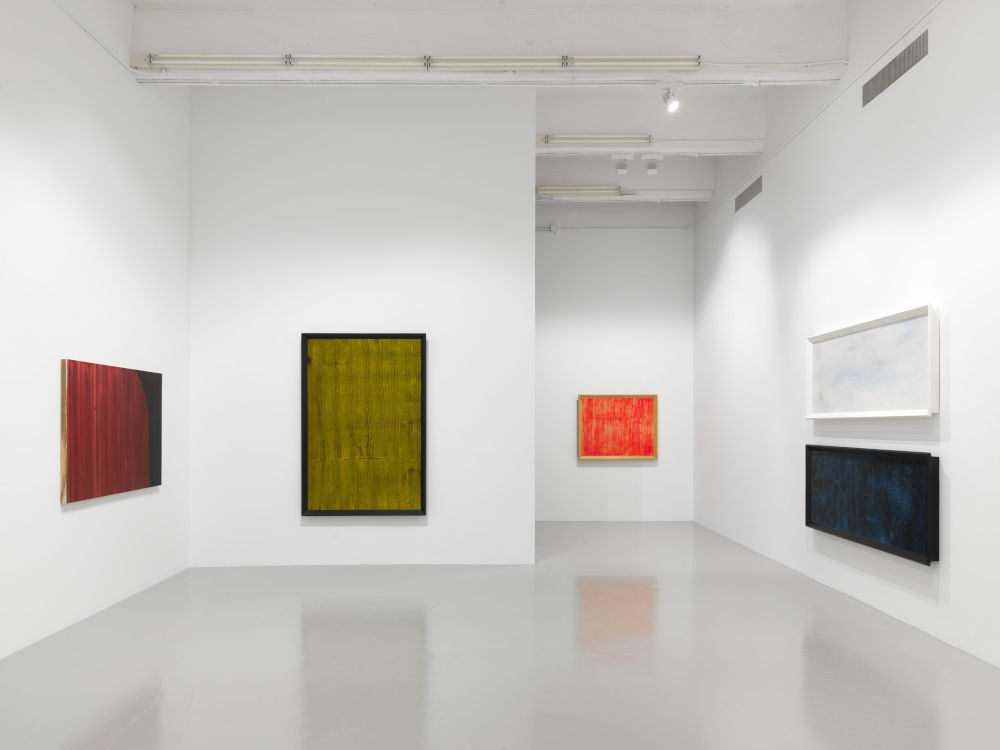 Over the course of his four-decade career, Mike Kelley generated a remarkably diverse oeuvre in an array of media, conflating so-called high culture and low culture, critiquing prevailing aesthetic conventions, and combining traditional notions of the sacred and the profane. This exhibition, organized in collaboration with the Mike Kelley Foundation for the Arts, features paintings from different series created over a 15-year period, between 1994 and 2009, spotlighting the breadth of the artist’s engagement with the medium of painting.

Organized by guest curator Jenelle Porter, ‘Mike Kelley. Timeless Painting’ takes both its title and conceptual starting point from the series that gave rise to many of the works on view, and for which ‘the compositional approach,’ Kelley stated, ‘is to be read as outside of the influence of historical aesthetic development.’ Featuring examples from twelve bodies of work, including The Thirteen Seasons, Cult Paintings, and Missing Time Color Exercises, this exhibition highlights Kelley’s remarkable exploration of painting in color. The exhibition will present, for the first time in the United States, Kelley’s mixed-media installation ‘Profondeurs Vertes,’ (2006) the artist’s ode to paintings in the collection of the Detroit Institute of Arts that captivated him as a young person.

The exhibition will be accompanied by a catalogue produced by Hauser & Wirth Publishers in collaboration with the Mike Kelley Foundation for the Arts. This book will include images of the complete series of works from which the exhibition draws, as well as texts by visual artists responding to Kelley’s work and an introduction by Jenelle Porter. Contributors include Edgar Arceneaux with Kurt Forman, Carroll Dunham, Daniel Guzmán, Richard Hawkins, Jay Heikes, Jamian Juliano-Villani, Mary Reid Kelley, Laurie Simmons, and Christina Quarles.

‘Mike Kelley. Timeless Painting’ contributes new perspectives to the discourse around the artist’s work, challenging conventional readings by exploring Kelley’s own meticulously documented intentions as a point of departure; resituating these works within the larger formal context of his oeuvre; and expanding traditional definitions of painting. Toward these ends, the exhibition brings together a collection of diverse works connected by their relation to Kelley’s expansive Educational Complex project. These works he called, decisively, paintings. Owing to the highly conceptual and often unconventional interactions of form and subject matter, viewers might see sculpture, installation, or drawing where the artist saw only an opportunity to reconstitute his interest in the vernacular of American popular culture through the traditional medium of painting.

In preparing the exhibition, Jenelle Porter looked to Kelley’s expansive and meticulously detailed document, Educational Complex Onwards (Project-related Flow Chart). Published in connection to a 2008 exhibition, this chart was created by the artist to articulate the interstitial relationships between forty different bodies of his work related to the titular project, Educational Complex, which aimed to reproduce from memory every educational institution the artist attended. Porter has employed the chart not only as a guide to Kelley’s thought processes and ideational framework for various bodies of work but also as a key to the particular terminology and identifications he attributed to each body of work.

The Timeless Paintings, which include Timeless Paintings #1 – 10, The Thirteen Seasons, and the Cult Paintings, amongst others, are featured within the Flow Chart due to their explicit relationship with Kelley’s formative – and traumatic – educational experiences, specifically his time as an undergraduate student in the art school at the University of Michigan. Through these series, the artist thus returned to the manner in which he had been taught to paint – a Hans Hofmann-inspired pedagogical technique stressing the elder artist’s famed ‘push and pull’ theory for creating spatial depth using color, form, and composition. Though Kelley had long since rejected those teachings, he appropriated and twisted them for this group of works. ‘Timeless Painting #8’ (1995) is a prime example with its distinct patches of red, yellow, and blue that together generate an illusion of space within the pictorial field. Porter observes in the accompanying exhibition catalogue that through these works, ‘Kelley not only reconnected, conceptually and corporally, to his past (and past trauma), he generated a means by which to inject painting into his oeuvre.’

As suggested by their titles, works from The Thirteen Seasons series reflect seasonal motifs while, in contrast, the Cult Paintings possess a more sociopolitical bent in their evocation of repressed trauma and abuse. Both of these bodies of work deploy painterly techniques, subvert the standard rectangular canvas, and use imagery culled from American culture. Another group of works – in which Kelley comments upon abstract painting of a prior generation, specifically Minimalism – uses numerous issues of ‘Sex to Sexty’ (a magazine he referred to as the ‘bible of hick erotica’) arranged chronologically in quasi-Minimalist framed grids, leaving blank spaces for the missing issues. In ‘Missing Time Color Exercise #3,’ (1998) as well as all other works in the series, these blank spaces are occupied by painted rectangles of custom mixed colors devised to balance, or ‘fill-in,’ the color and composition of the missing magazine covers. A complementary series, Missing Time Color Exercises (Reversed), applies the same strategy to a collection of issues absent from the first.

Production of the two distinct Missing Time Color Exercises series spawned numerous related works. The Bouquet series, for example, consists of plastic mixing cups grouped according to spectrum, in a variable arrangement on the floor. ‘Free Gesture Frozen, Yet Refusing to Submit to Personification (Green Fingerpainting)’ (1998) uses the paint leftover from the painted rectangles on an organically shaped canvas, providing a counterpoint to the rectilinear structure of the Missing Time Color Exercises. To create the Black Velvet Studies, Kelley dabbed remaining paint onto black velvet with his finger in patterns reminiscent of constellations.

‘The Thirteen Seasons (Heavy on the Winter): Art’ (1994) – an oval wooden panel painted by Kelley as a trompe l’oeil rendering of a wooden surface affixed with a found flyer – functions as a prelude to his Wood Grain Paintings. ‘Wood Grain #7,’ (2003) for example, manifests the same idea in an expanded rectangular format, adhering more closely to a traditional concept of painting, but not without a self-referential flourish. While the Wood Grain Paintings play with self-reference, the Carpet Paintings poke at art history. To create the latter, Kelley adopted the monoprint technique in applying paint to a plastic sheet with a push broom then pressing a piece of carpet to the paint. By parodying the aesthetics of color field painting and the systematized approaches of process art, Kelley simultaneously critiques traditional art movements and the formal training they prescribe.

Kelley’s foray into painting expands well beyond the parameters of the Flow Chart. For the exhibition, Porter thus included works from the Carpet Paintings and the Horizontal Tracking Shots series, of which the latter comprises fourteen Untitled paintings. Sets of large polychrome panel paintings are each affixed with a biomorphically shaped painting, as exemplified by ‘Untitled 2’ (2008 – 2009). These works, with their colorful palette, architectural scale, and domestic interior details, push conventional two-dimensional painting into the realm of sculpture and installation. Displayed alongside small, custom-framed works such as ‘Sci-Fi Cock’ (2008 – 2009) and ‘Lobed’ (2008 – 2009), these dramatic entries transform the wall by evoking theatrical set design.

Originally created to accompany a 2006 exhibition of nineteenth-century American painting at the Louvre Museum in Paris, ‘Profondeurs Vertes’ is on view for the first time in the United States. Composed of three video projections, one oil painting, seven drawings, and an original sound score, this immersive installation pays homage to several paintings in the Detroit Institute of Arts collection that exerted a profound effect on the young Mike Kelley. Among these are Thomas Wilmer Dewing’s ‘The Recitation’ (1891) and John Singleton Copley’s ‘Watson and the Shark’ (ca. 1778). ‘Profondeurs Vertes’ thus serves as the touchstone of the exhibition at Hauser & Wirth, embodying Kelley’s lifelong dialogue with painting, from the inspiration he found in early American paintings to his rejection and embrace of the medium, first as a student contending with the pedagogical legacy of Hans Hofmann and, later, as an established artist.

Just as Kelley celebrated the artists who informed his work, ten significant contemporary artists discuss how Kelley has shaped their artistic development in the catalogue essays published by Hauser & Wirth Publishers and edited by curator Jenelle Porter, on the occasion of this exhibition.

About the Artist
Mike Kelley is widely considered one of the most influential artists of our time. In much of his work, Kelley drew upon the spectrum of high and low culture and was known to scour flea markets for America’s cast-offs and leftovers. Mining the banal objects of everyday life, Kelley elevated these materials to question and dismantle Western conceptions of contemporary art and culture. His projects invoke a range of media and forms, illustrating the artist’s versatility and underscoring a number of Kelley’s recurrent themes, such as repressed memory, sexuality, adolescence, class, and Americana, which were central to his artistic praxis. Throughout his career, Kelley also worked on curatorial projects, collaborated with many artists and musicians, and produced a formidable body of critical and creative writing.

About the Curator
Jenelle Porter is a curator and writer. From 2011 to 2015, she was Senior Curator at Institute of Contemporary Art, Boston, where she organized thematic exhibitions such as ‘Fiber: Sculpture 1960 – present’ and numerous monographic exhibitions. Her exhibitions have twice been honored by the International Association of Art Critics. Most recently she organized ‘Less Is a Bore: Maximalist Art & Design’ for ICA, Boston. From 2005 to 2010, Porter was curator at the Institute of Contemporary Art, Philadelphia, and prior to that held curatorial positions at Artists Space, New York; Walker Art Center, Minneapolis; and Whitney Museum of American Art, New York.

About the Foundation
The Mike Kelley Foundation for the Arts advances the artist’s spirit of critical thinking, risk taking, and provocation in the arts. Established by the artist in 2007, the non-profit foundation furthers Kelley’s philanthropic work through grants for innovative projects that reflect his multifaceted artistic practice and also preserves and supports the artist’s legacy more broadly through various educational initiatives such as loans of artworks, exhibitions, and publications.