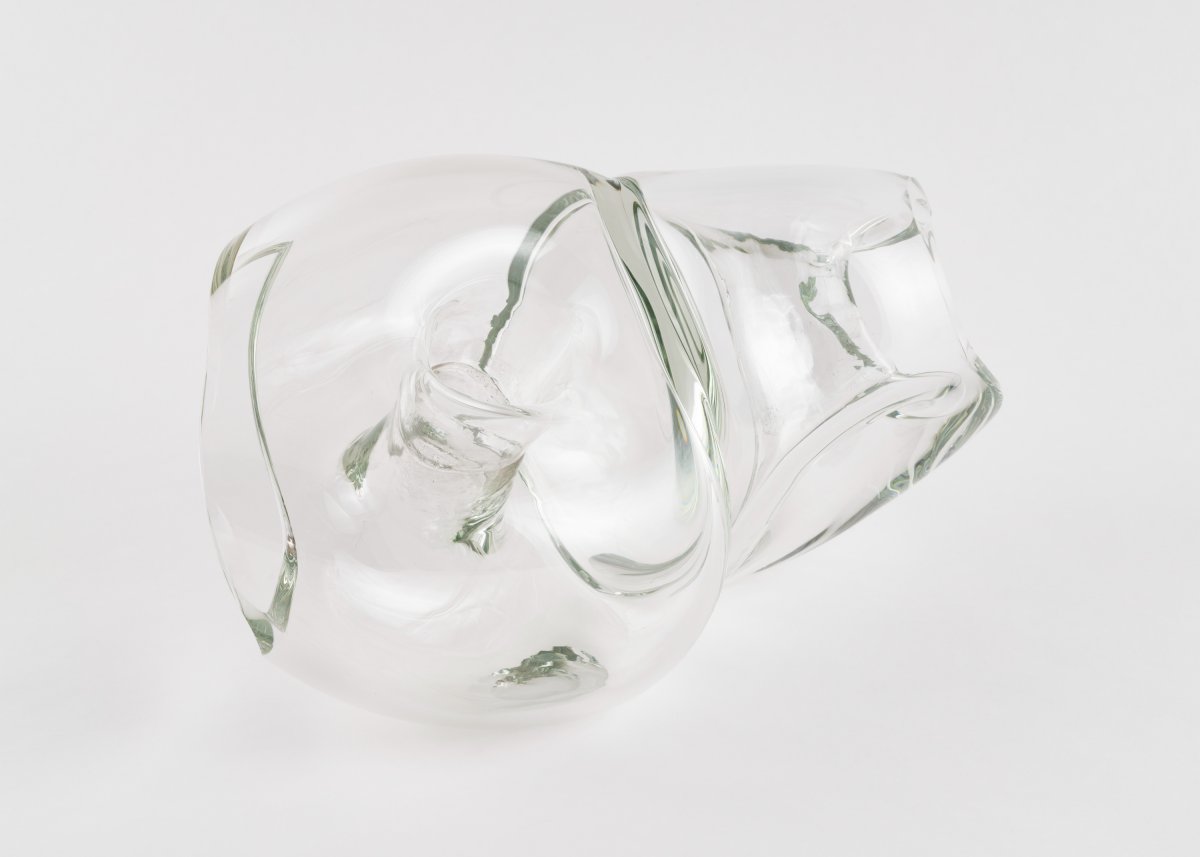 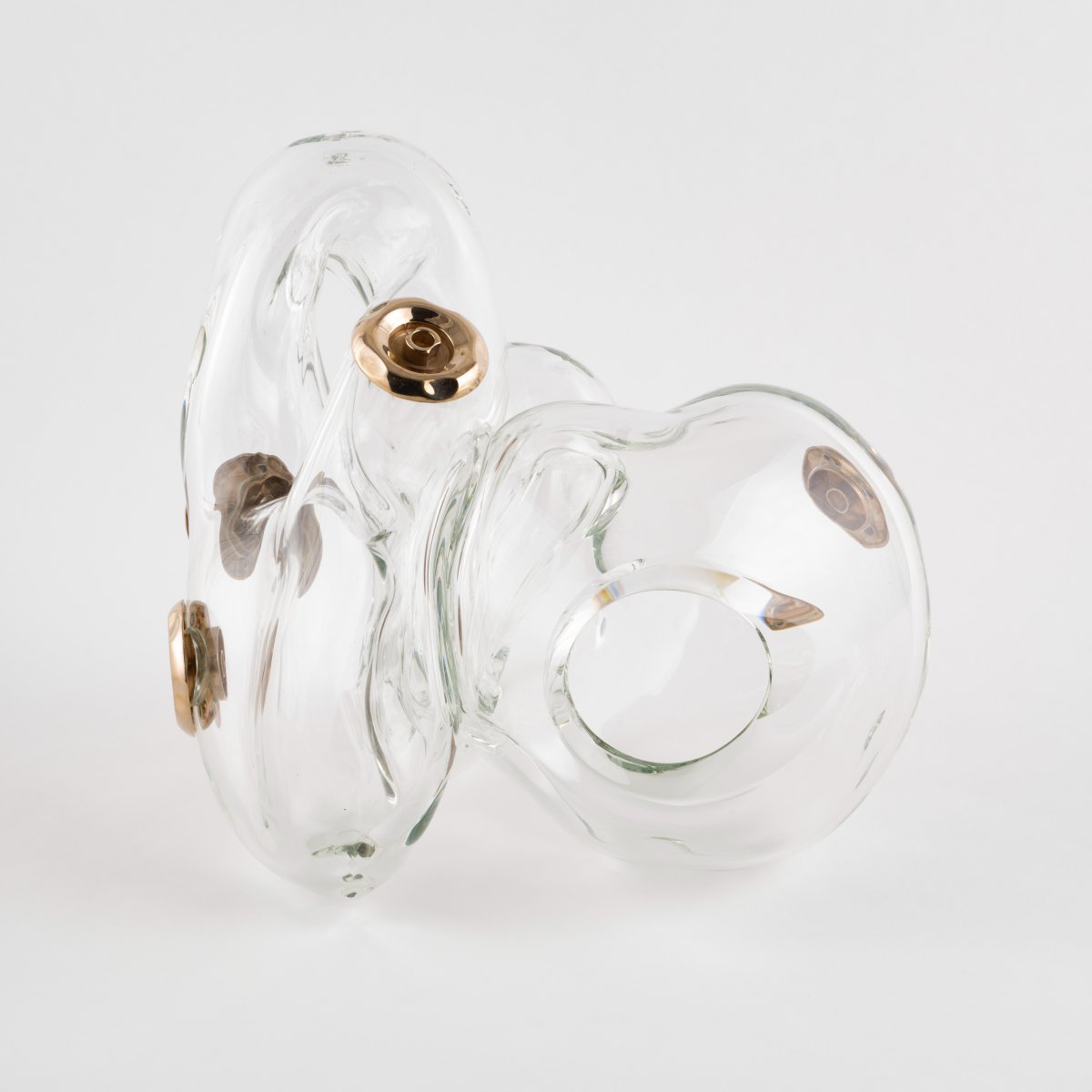 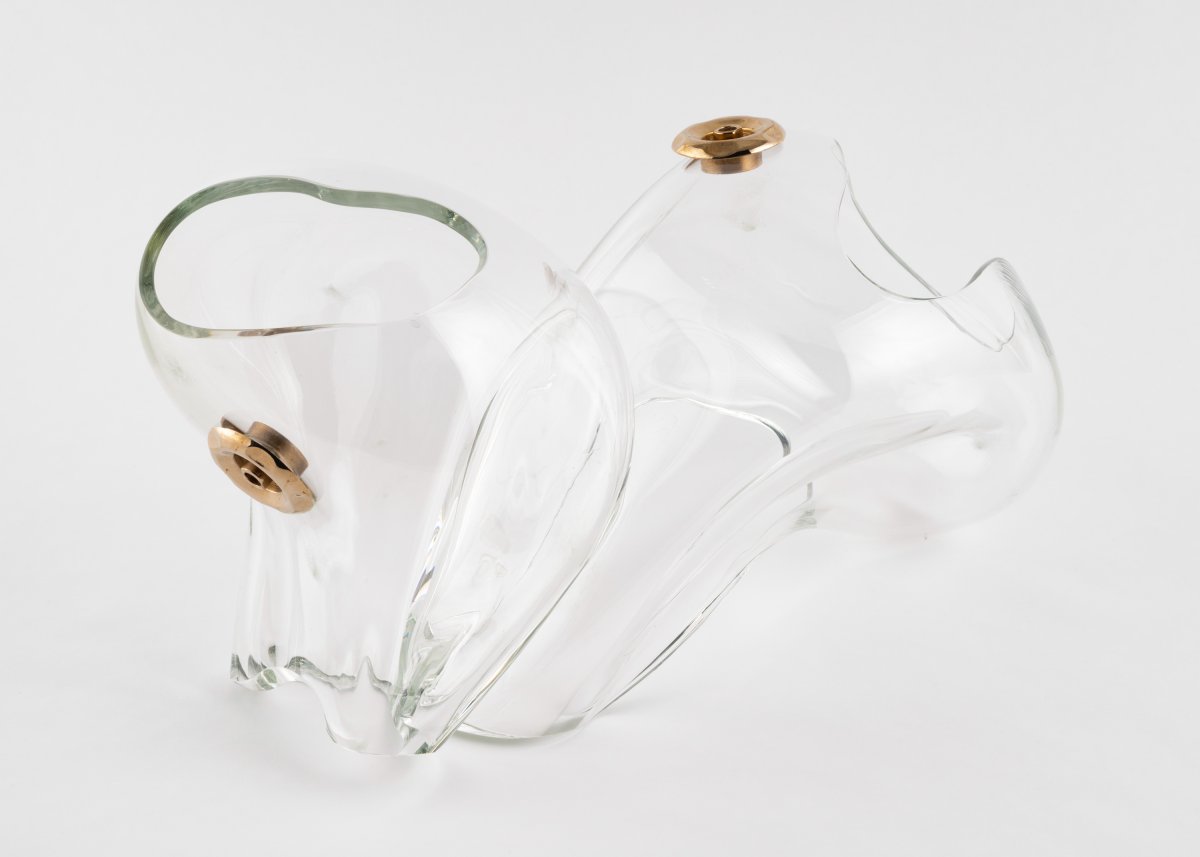 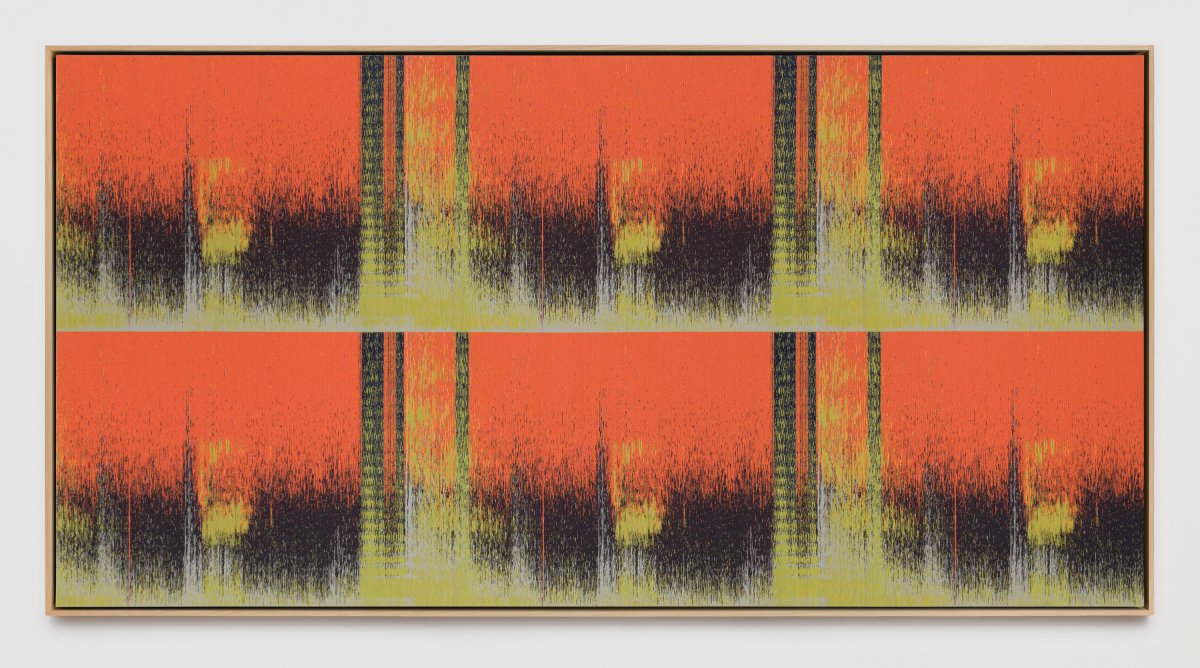 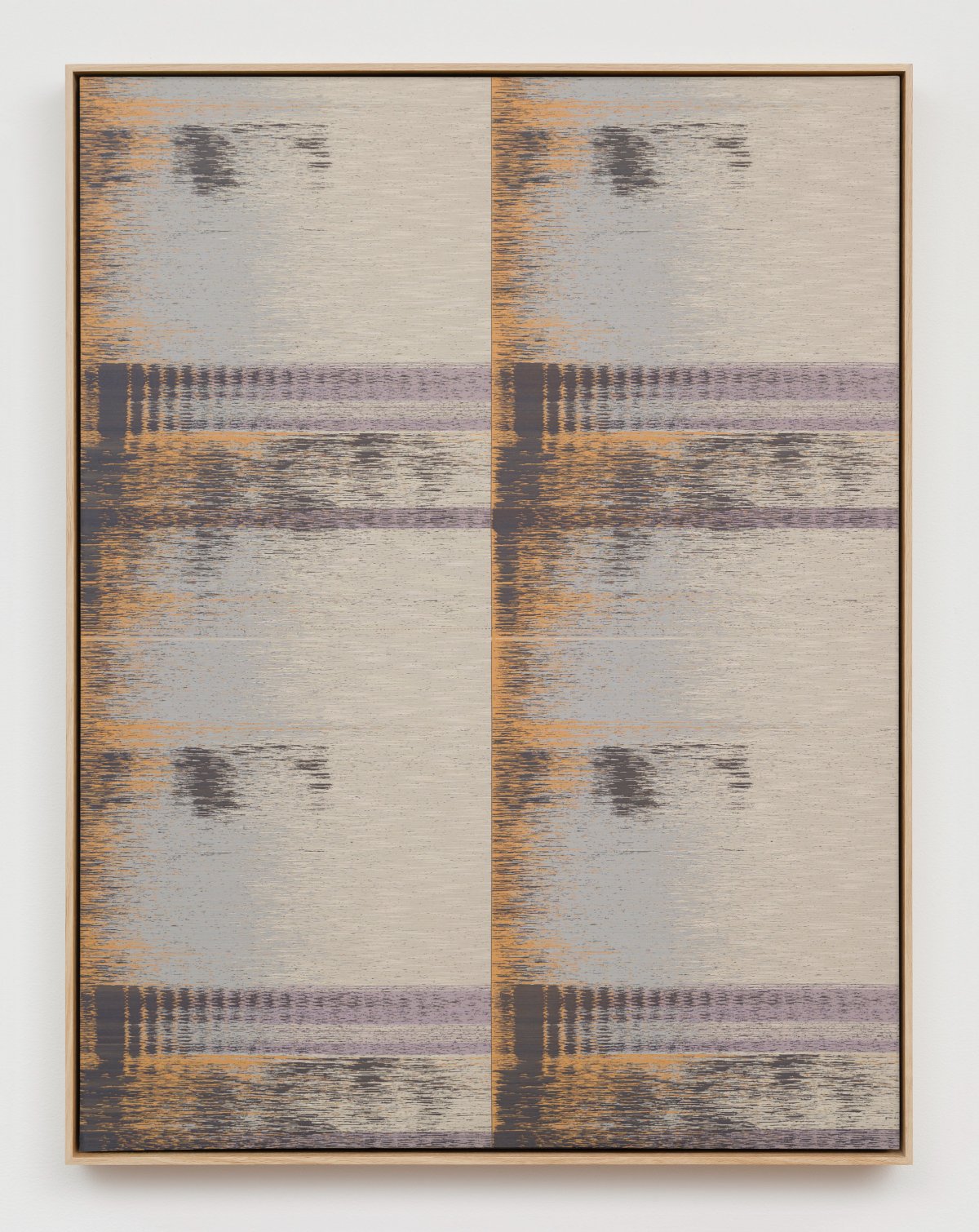 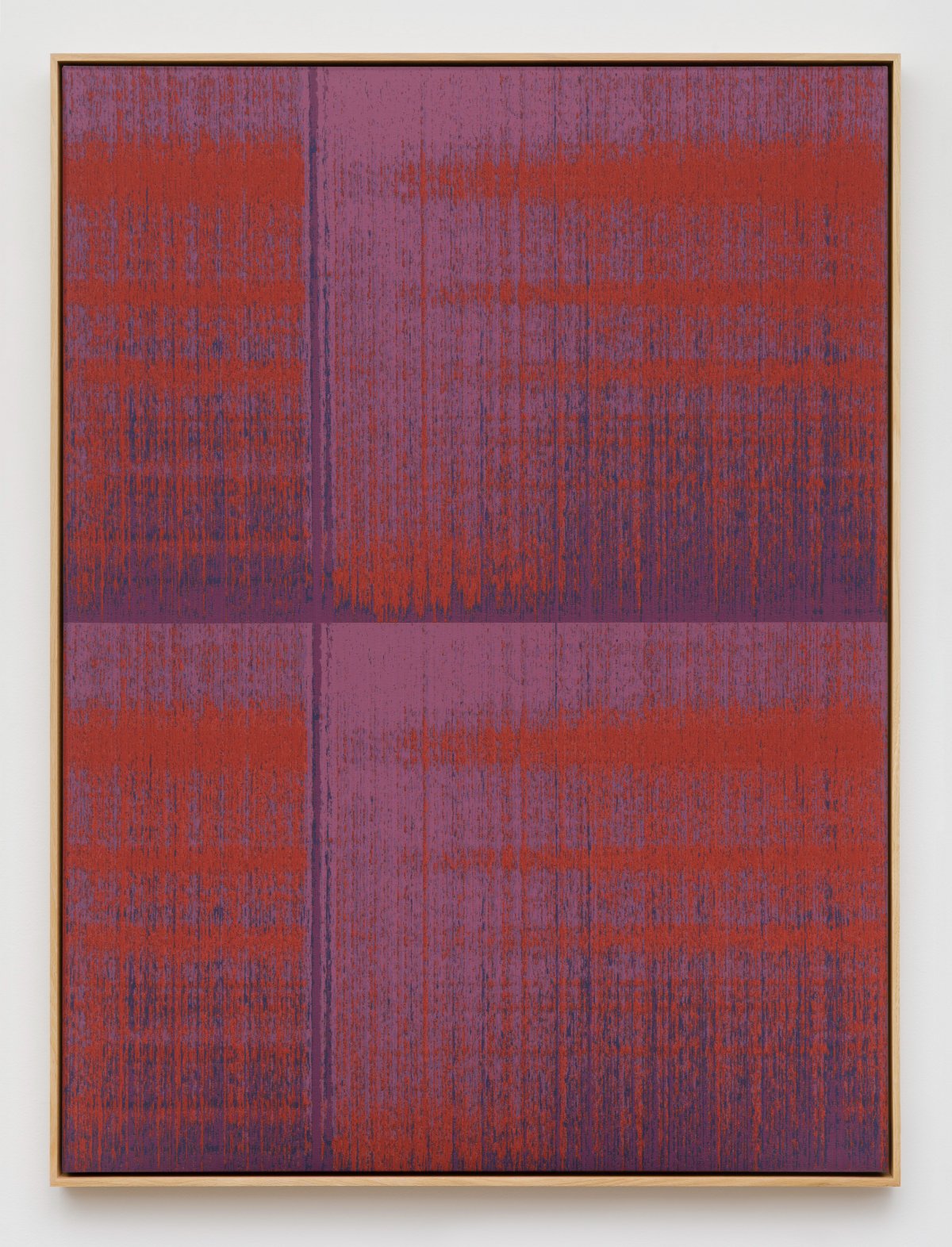 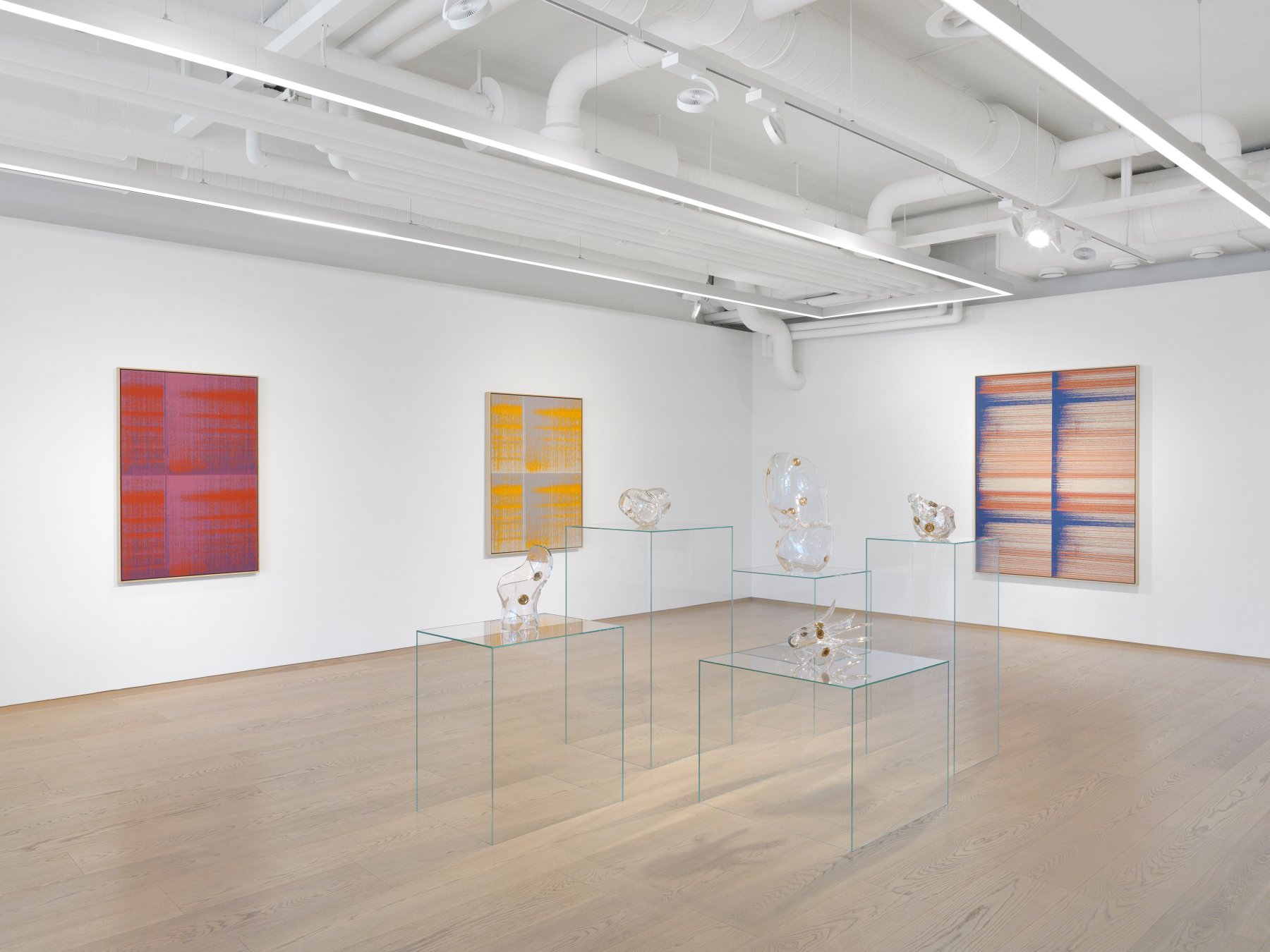 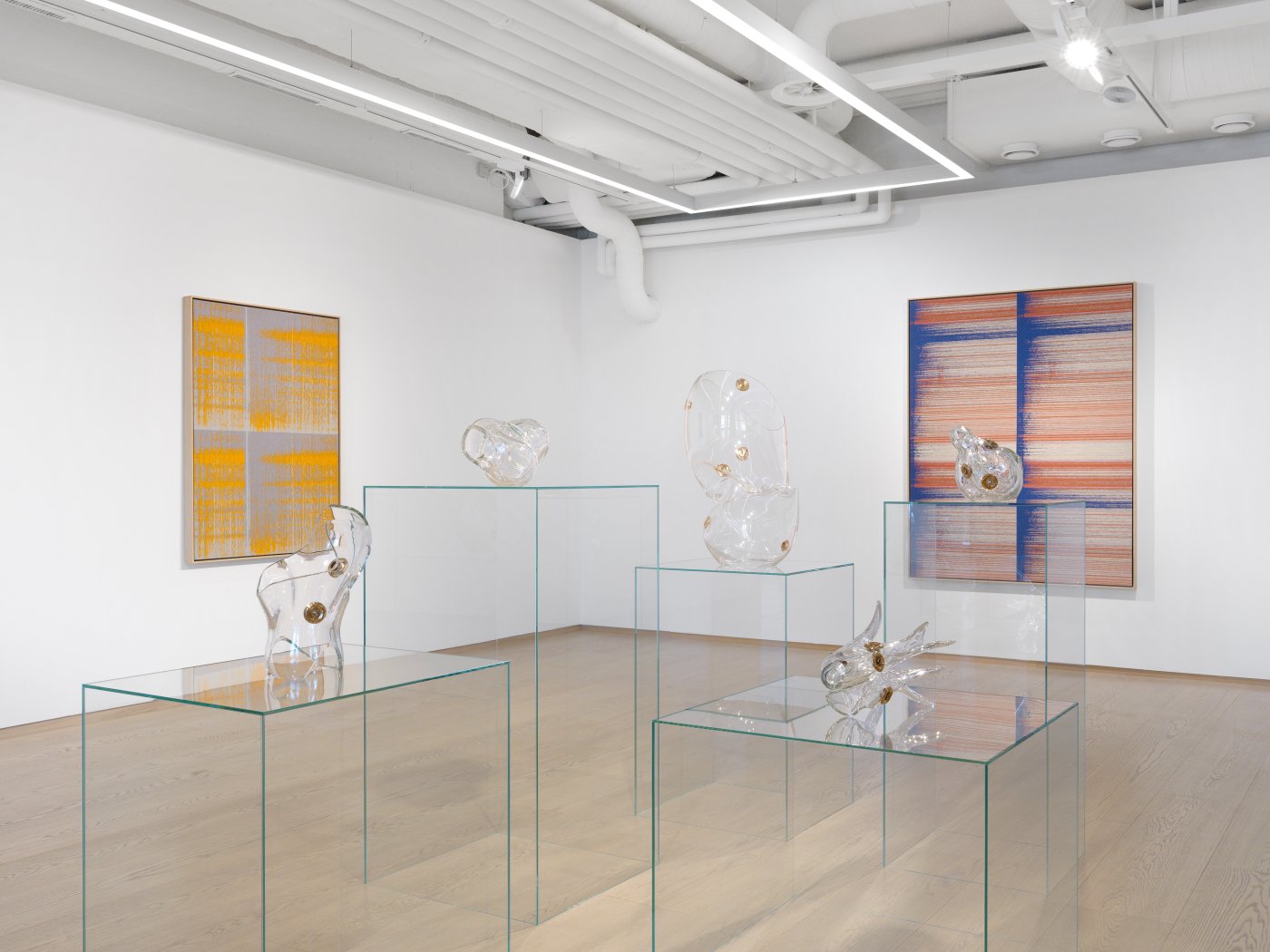 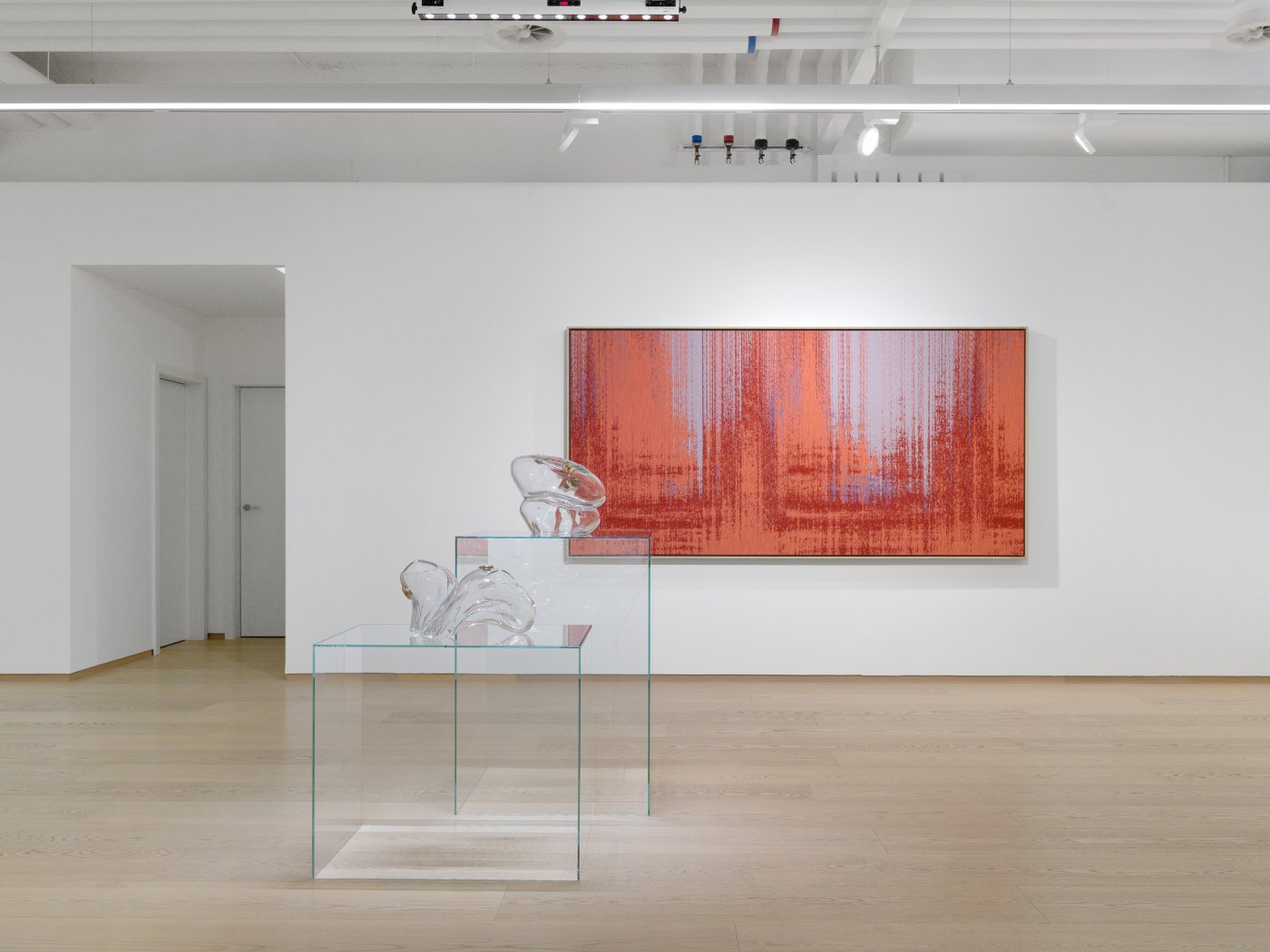 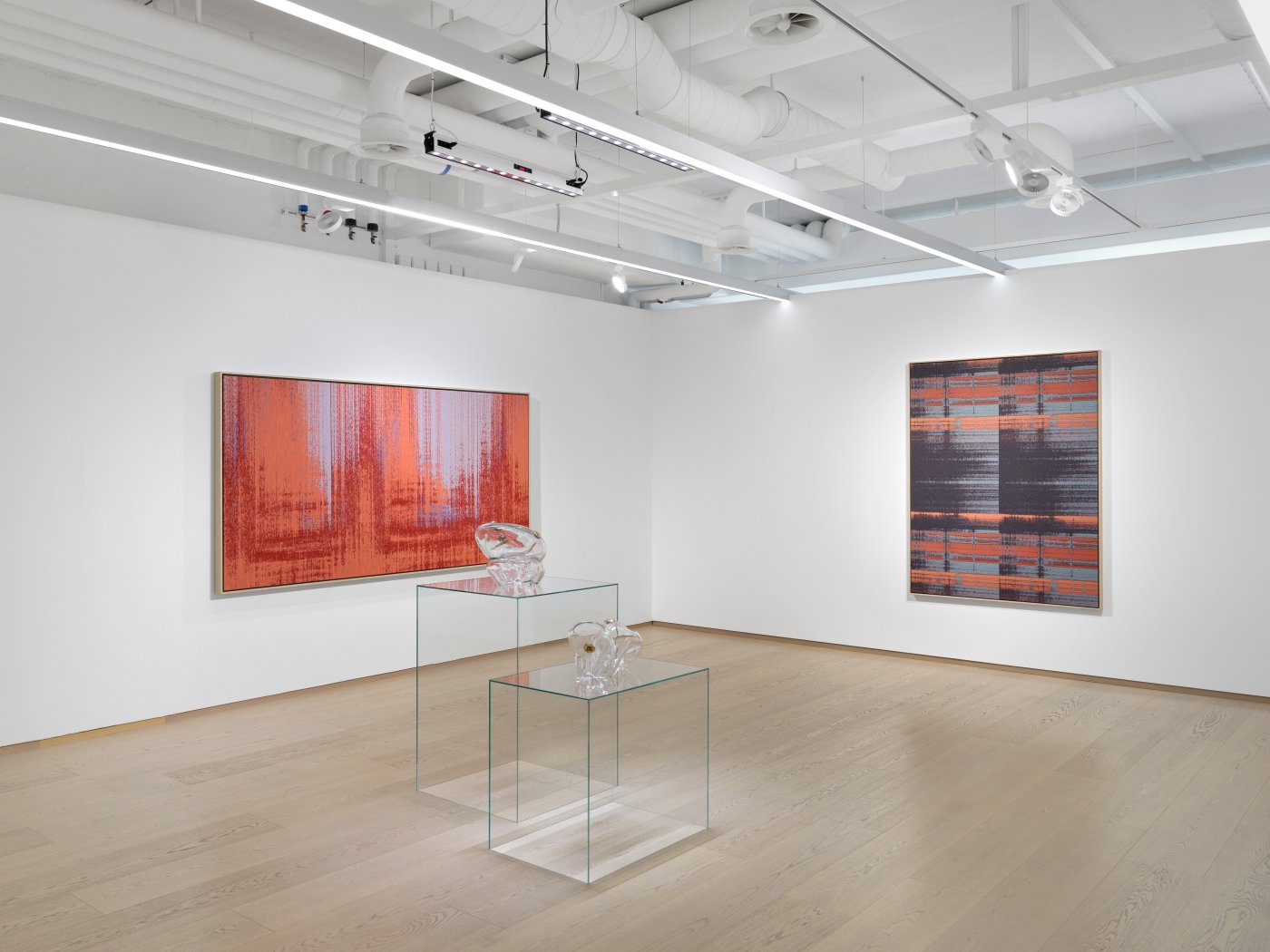 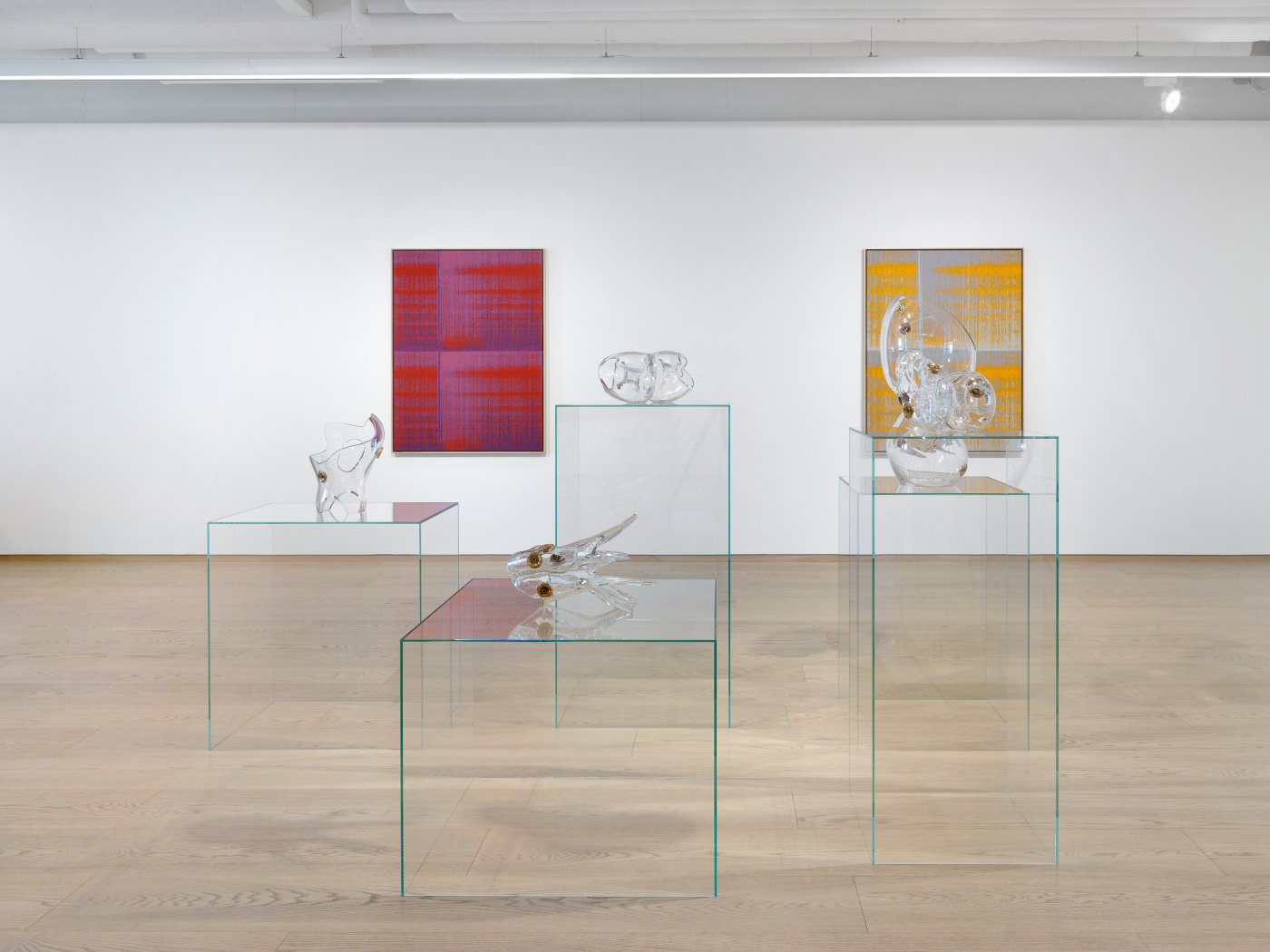 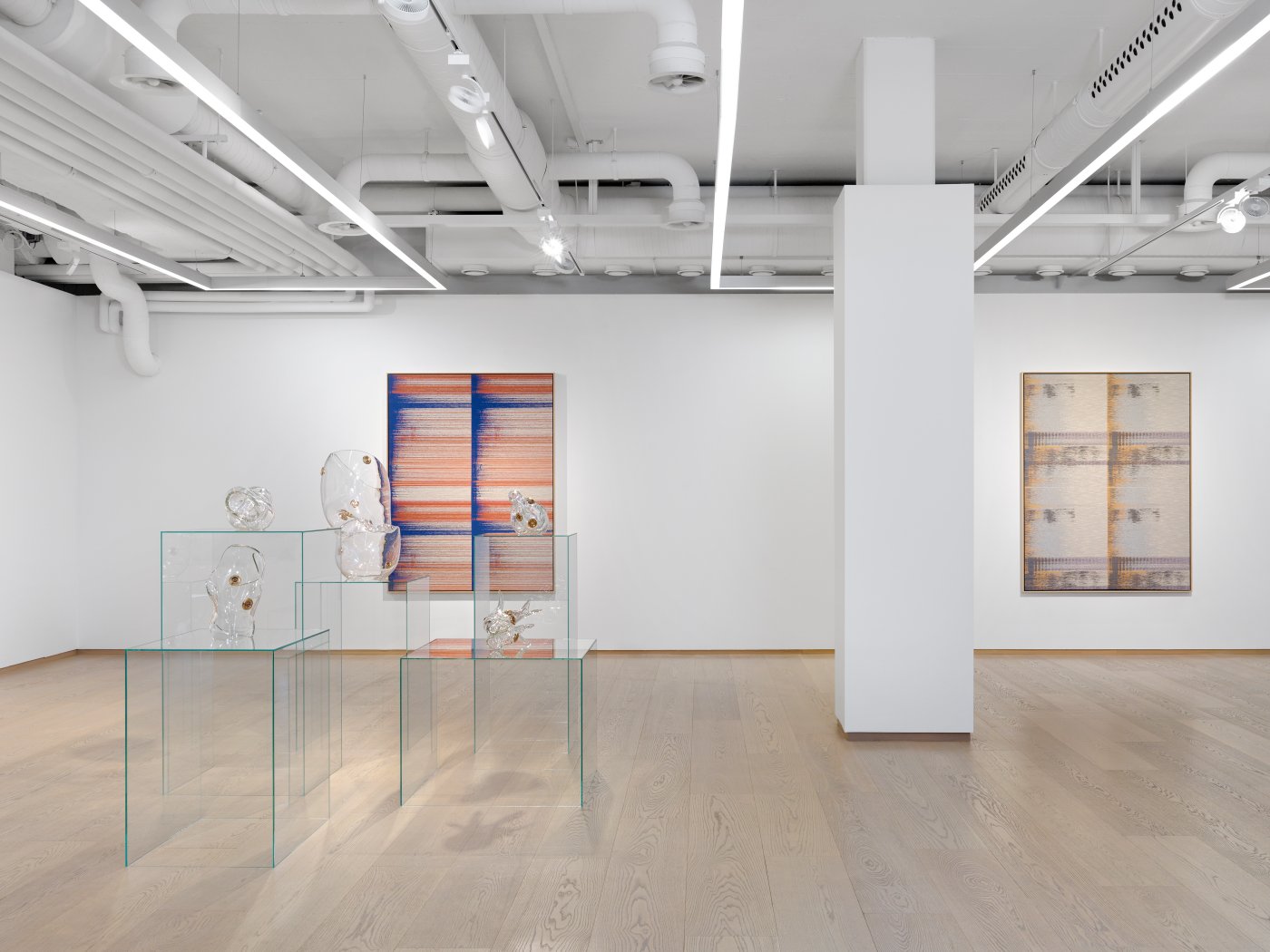 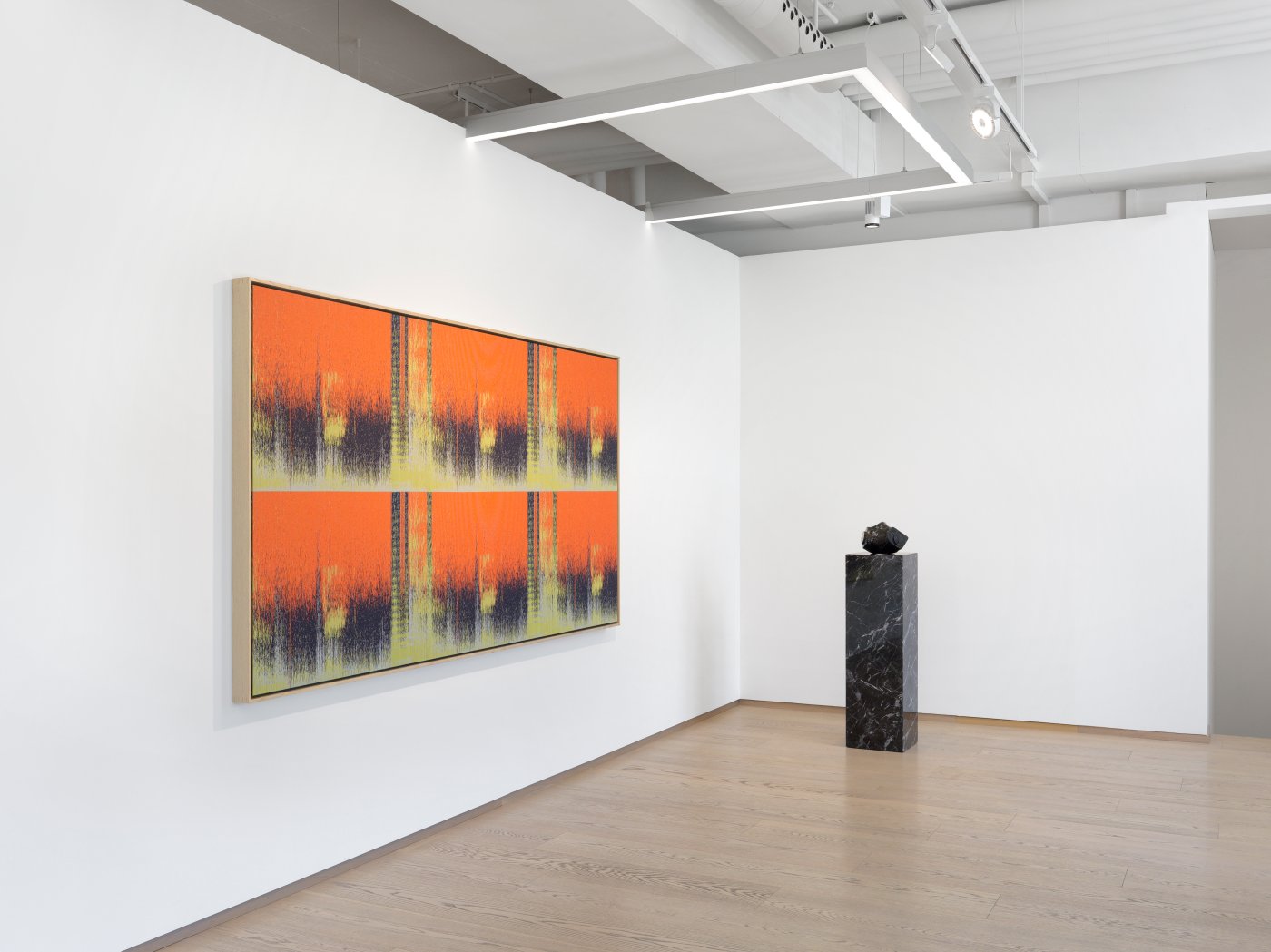 At the core of Tajima’s practice is an interrogation of deeply sensed, invisible forces. Encompassing performance, sculpture, painting, textile, and installation, her work seeks to materialize the ungraspable, bringing awareness to the energies and frequencies that exist within and between humans. A driving force in Tajima’s practice is an inquiry into the relationship between nature and technology, mapping and exploring the relational structures of human bodies in built environments. In marrying the language of painterly abstraction with advanced technologies, Tajima’s work occupies a similar space as several artists in Pace’s roster, such as James Turrell, Trevor Paglen, and teamLab.
One of Tajima’s best-known series, Negative Entropy, embodies the artist’s distinctive union of the digital with physical matter. The works begin with an ephemeral audio recording that is converted into digital spectrogram images before being transposed into abstract Jacquard weavings. Capturing sound from a diverse array of sources – from a high-tech energy company in California to the morning prayer in a Zen temple in Japan – the Negative Entropy textiles give form to sound and frequencies. Tajima considers them as ‘acoustic portraits’, affective images of specific energy production sites.

Borrowing its title from a physics term that denotes a structural shift from disordered to ordered, the Negative Entropy works are concerned with the systems that govern and the polarities of freedom and control. For Negative Entropy (Toranomon Construction Site, Morning Radio Taiso, Full Width, Red, Hex) (2022), Tajima visited a construction site in Japan to record the workers’ morning exercise regime. Embedded in the tapestry of coral, rust, and lilac, Tajima captures the sound of hundreds of bodies’ aligning as they prepare for their day’s work. Woven into the fabric of this piece is the tension between a collective and an individual, the body and the urban environment.

Just as the Negative Entropy works visualize sound, Tajima’s Anima sculptures give form to breath. Inspired by the malleability of glass as it changes form between liquid and solid, Tajima is interested in the transparent material’s capacity to materialize the human breath. Drawing inspiration from philosophical ideas of the life (or ‘anima’ in Latin), Tajima not only ‘animates’ her sculptures but also brings attention to the incorporeal essence of a body. Each form is punctured by jacuzzi jet nozzles – a recurring motif in Tajima’s work that recalls an array of visual references from robotics and prosthetics to bondage aesthetics. The contrast of delicate, biomorphic form with the mechanical ruptures produces a flow of air, creating the impression of release and pressure as if the sculpture is breathing.

In Anima 42 and Anima 43, Tajima expands this idea by infusing the molten glass with a phosphorescent mineral that causes the sculptures to glow in a darkened environment. By absorbing and emitting light, these sculptures are imbued with a quasi-sentient quality, as if in a constant state of evolution.

One of only two works Tajima has made in marble, Pranayama (Marble 2) (2018), is a prescient sculpture cast from the mould of a respirator mask. Though made before the covid-19 pandemic, the contemporary context in which it is displayed enhances the power it holds. Drawing inspiration from the Ayurvedic idea of controlling breath as a means of managing the nervous system, this sculpture speaks to the biopolitics of self-regulation and the emphasis on wellness and body maximization in contemporary culture. Like the Anima works, this sculpture incorporates a jacuzzi jet, creating a contradiction between the open form and dense material as if the breath has been blocked.