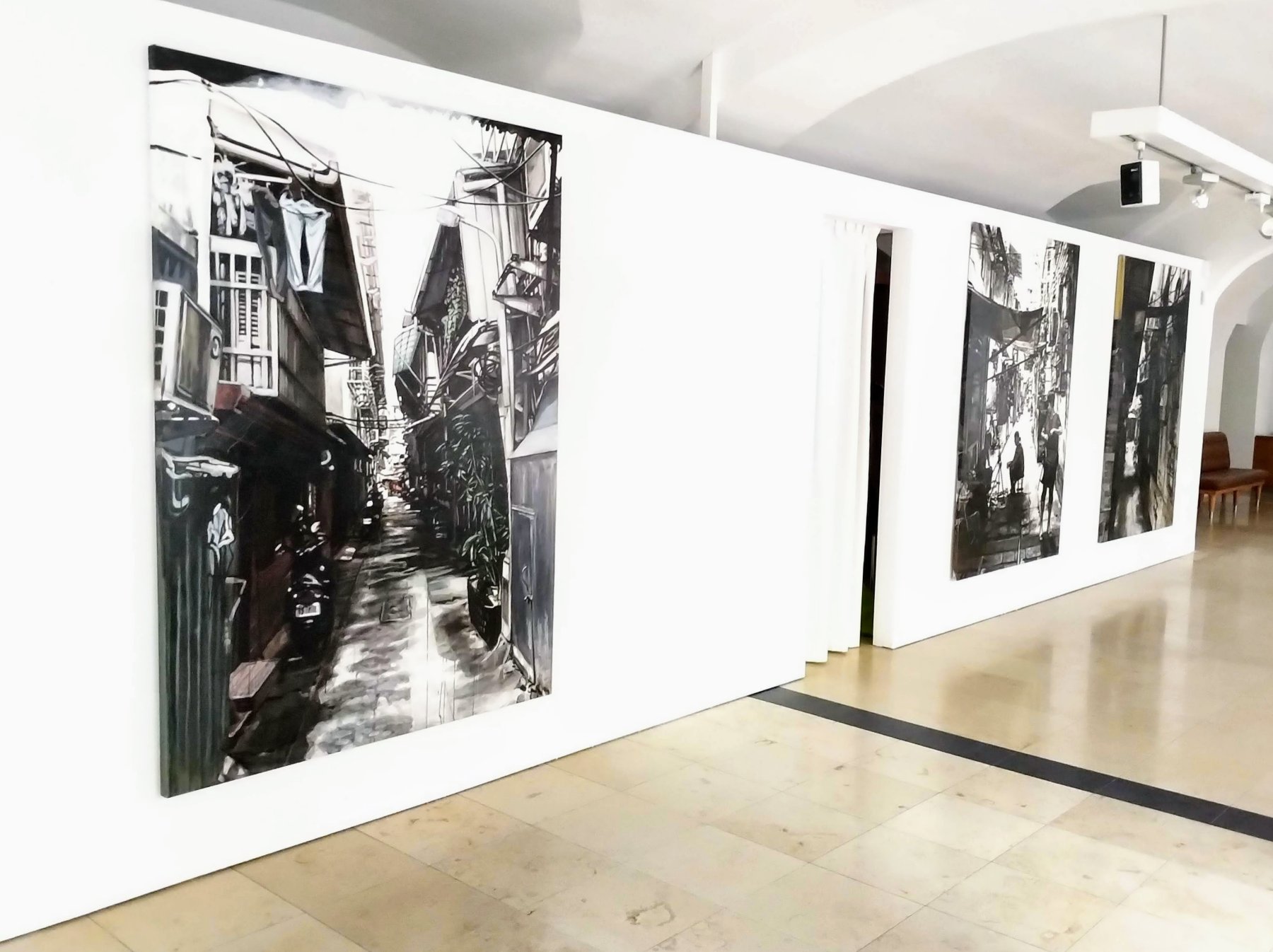 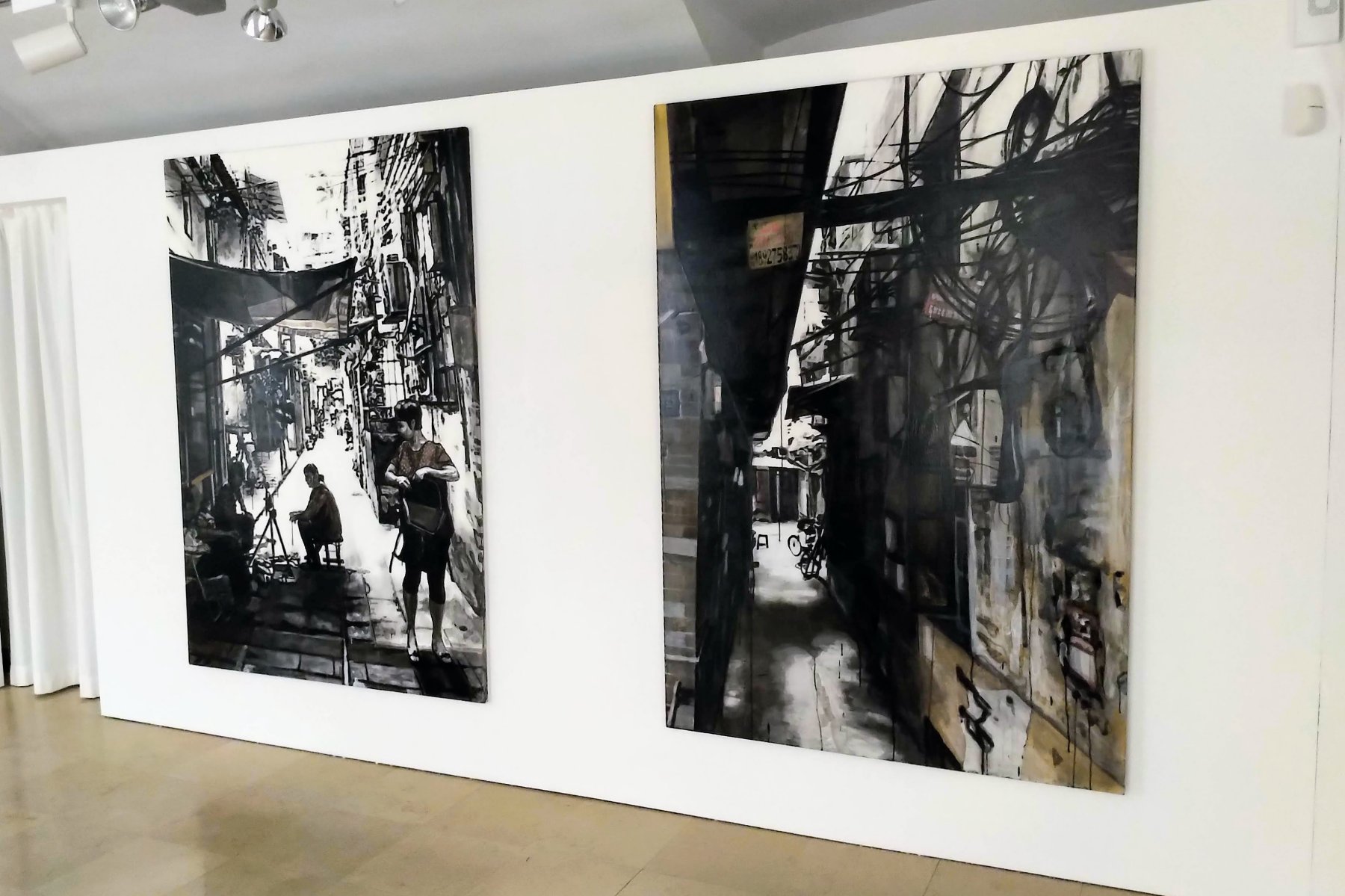 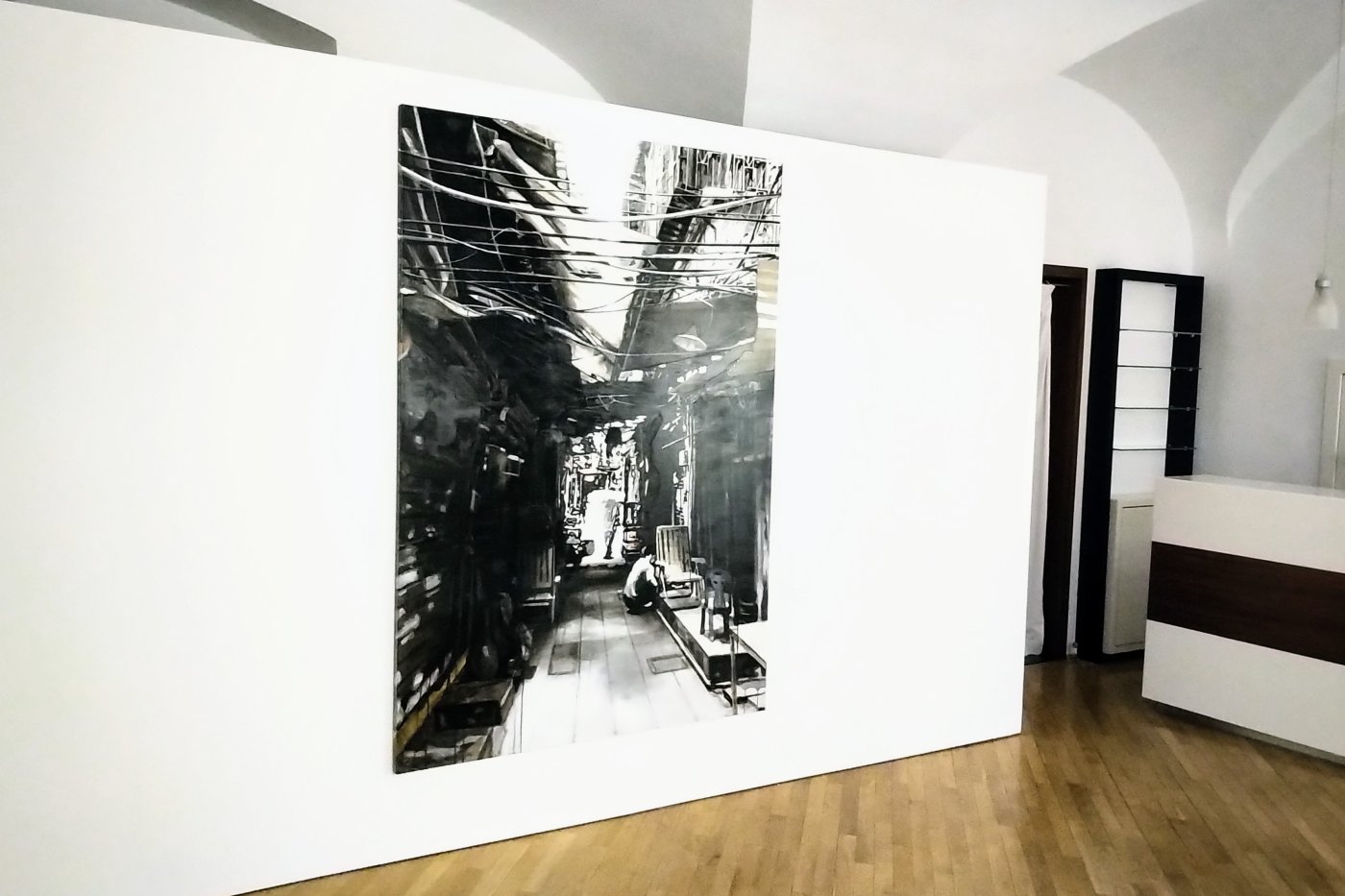 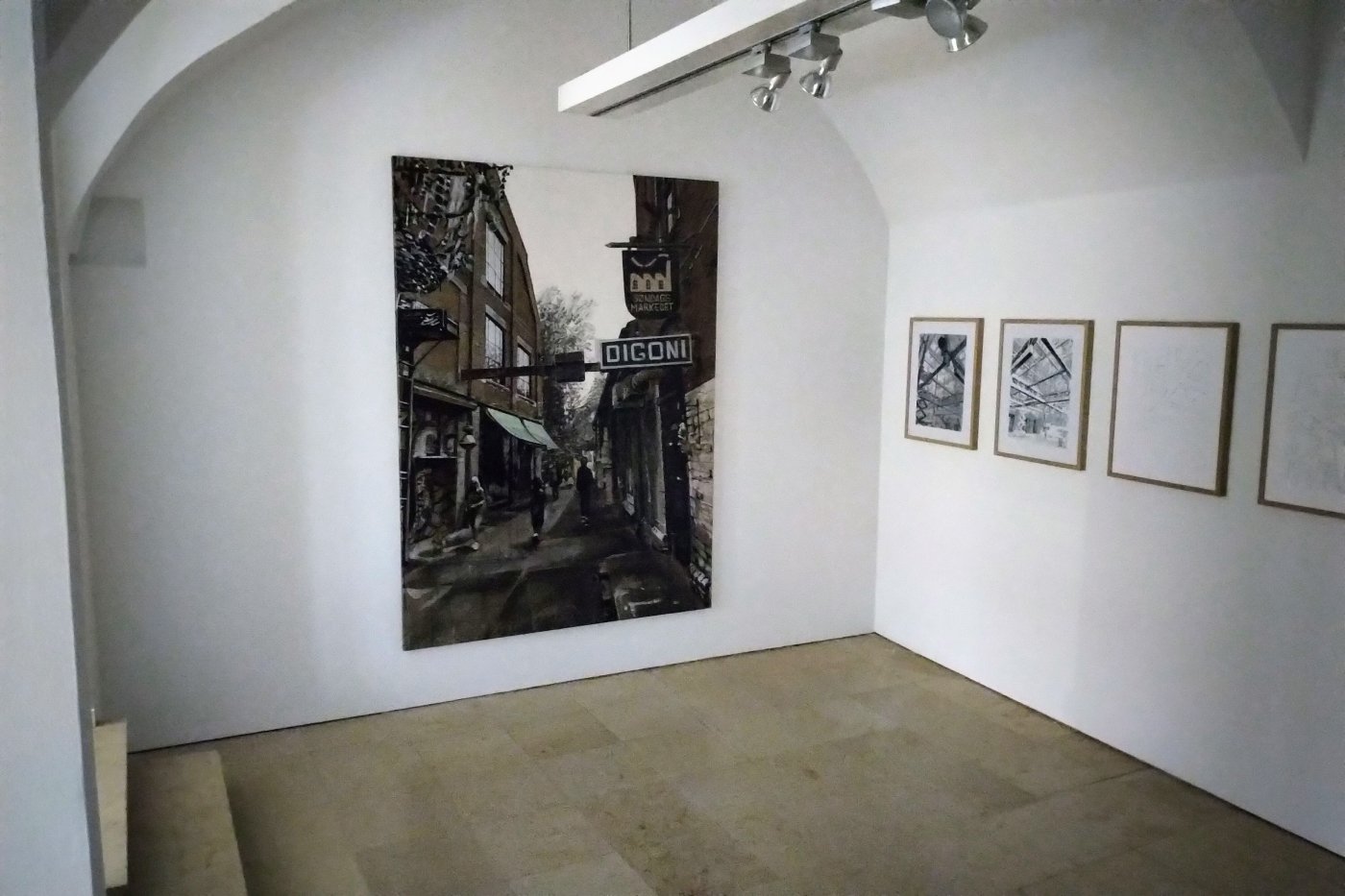 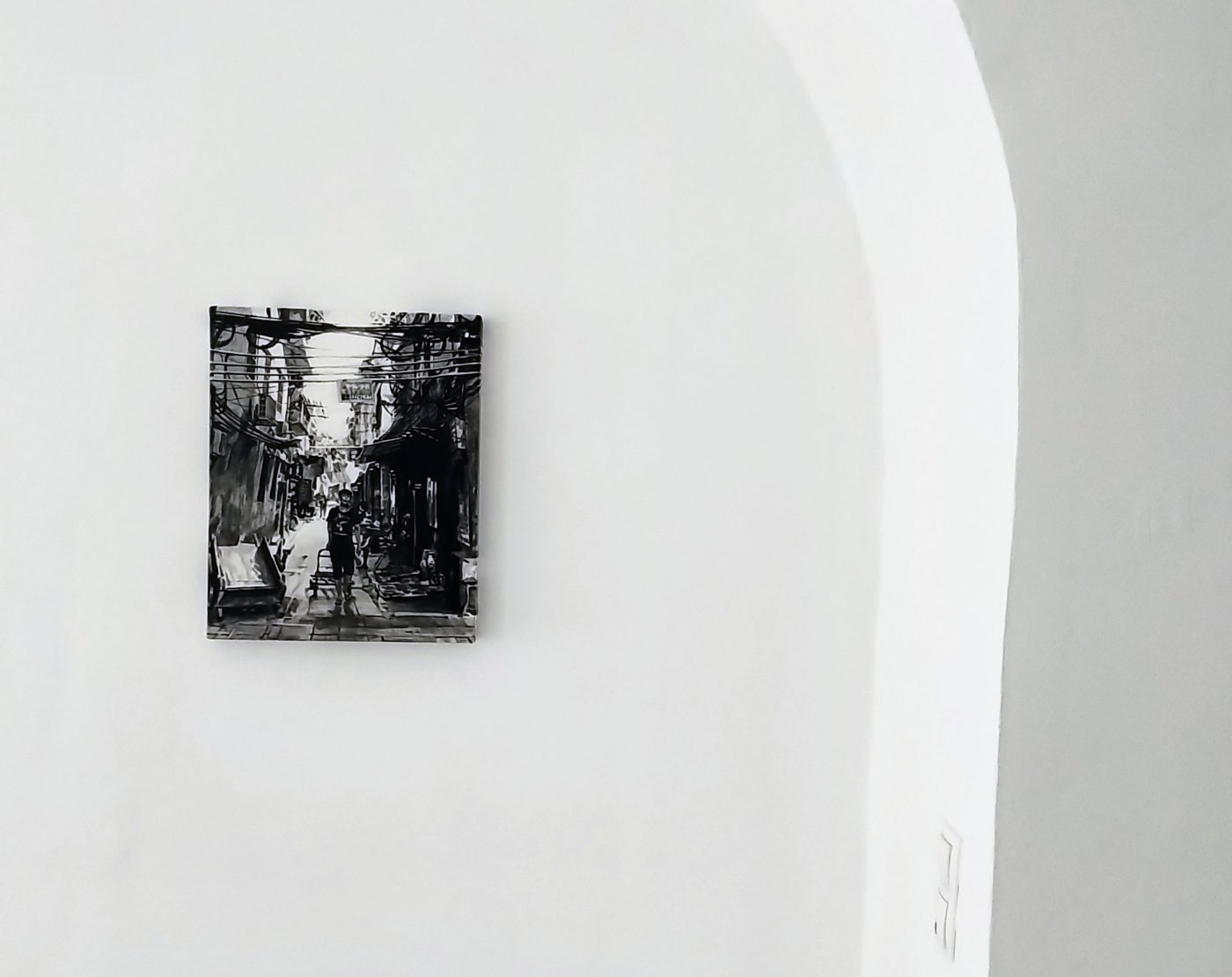 Miha Štrukelj documents the landscapes, the energy, and the spirit of urban environments around the world where he stays during his travels. He captures snippets of places and situations in compositions whose content is carefully considered. When the original imprint of reality is transferred onto the canvas, the moment, frozen in time and space with a photograph, is transformed into its complete opposite: a timeless and spaceless snapshot that can belong to any one of us. Therefore, his works make us think that he has captured the same moments that we would have wanted to capture ourselves, to remind us of our travels, moments when we were lost in different spaces and times, and found ourselves in unknown places among unknown passers-by. His works are like film sequences of different places from our memory, stories embedded in our memory that create a new whole, a new narrative.

Štrukelj’s technically accomplished and perfected manner of transferring digital images onto the canvas using a grid is a method of interpreting the digital image. The original reference photograph, which is copied to other media and formats, is never transformed into only one interpretation. In addition to mostly large-format paintings, the same motifs appear in drawings on paper or transparent paper. The latter bring new layers to the examination of the role of an image and the fleeting record of a moment. The layering – each drawing consists of up to five layers of transparent paper, each containing only a part of the image – often deceives the spectator, as the final composition looks like a digital print on paper. Soft transitions created by the transparency of the paper allude to sfumato, while the excellent grasp of the medium and of drawing adds a new layer of poetic expression and timelessness. At the same time, the drawings on paper break down the primary motif in a particular way, as the artist records only parts of outlines of the built environment and people. The spectator is left to make out the remainder, relying on their memories, gazes, and interpretations. Just as images disappear from memory with time, Štrukelj’s drawings erase the recognizable outlines of the city. However, they do not remain unfinished or incomplete. We can be anywhere, anytime, yet we are exactly where the artist wants to take us.

Recently, the artist has added another layer of interpretation, of the reference photograph, directly on the digital print. Lines of different length, thickness, and colour are applied to selected lines on the digital print, so a partial mirror image appears on the back side of the print. These drawings allude to the distortions and errors in modern imaging technology and often create interesting modifications to the colour and content of the primary image. This is an indirect return to the artist’s early works in which he, fascinated by the rapidly developing digital imaging technology, translated its specifics to the medium of painting using different approaches and tools.

However, Štrukelj’s most representative medium remains the canvas. Since the beginning, his recognizable style has relied on using the grid to transfer a reference image onto a canvas. After drawing the outlines of the reference image, the canvas is covered with different shades of masking tape, varnish, acrylic, and pencil drawing, to which a finishing glaze is applied, creating the appearance of depth and stressing the colour nuances.

Surrounded by paintings and drawings of urban outlines, we enter the artist’s stories and metaphorically stroll down our own memory lane, as it were. While discovering city streets and their commotion, we watch empty shells of abandoned buildings supported by scaffolding, not quite sure whether the temporary structures are supporting buildings in the making or protecting them from destruction. Štrukelj’s paintings are notes of the past, journals of his travels capturing moments and scenes. The canvases he has created in the past four years are fascinating: technically brilliant, yet soft and somewhat melancholy. They lull even a stoic spectator into stories of the past, while unveiling scenes of the near future.

Courtesy of the artist and Galerie Ernst Hilger