Lévy Gorvy presents Mickalene Thomas’ Beyond the Pleasure Principle in New York, the first chapter of a multipart exhibition that will unfold across four international cities during fall 2021 to present interconnected bodies of new work, ranging from painting and collage to installation and video. 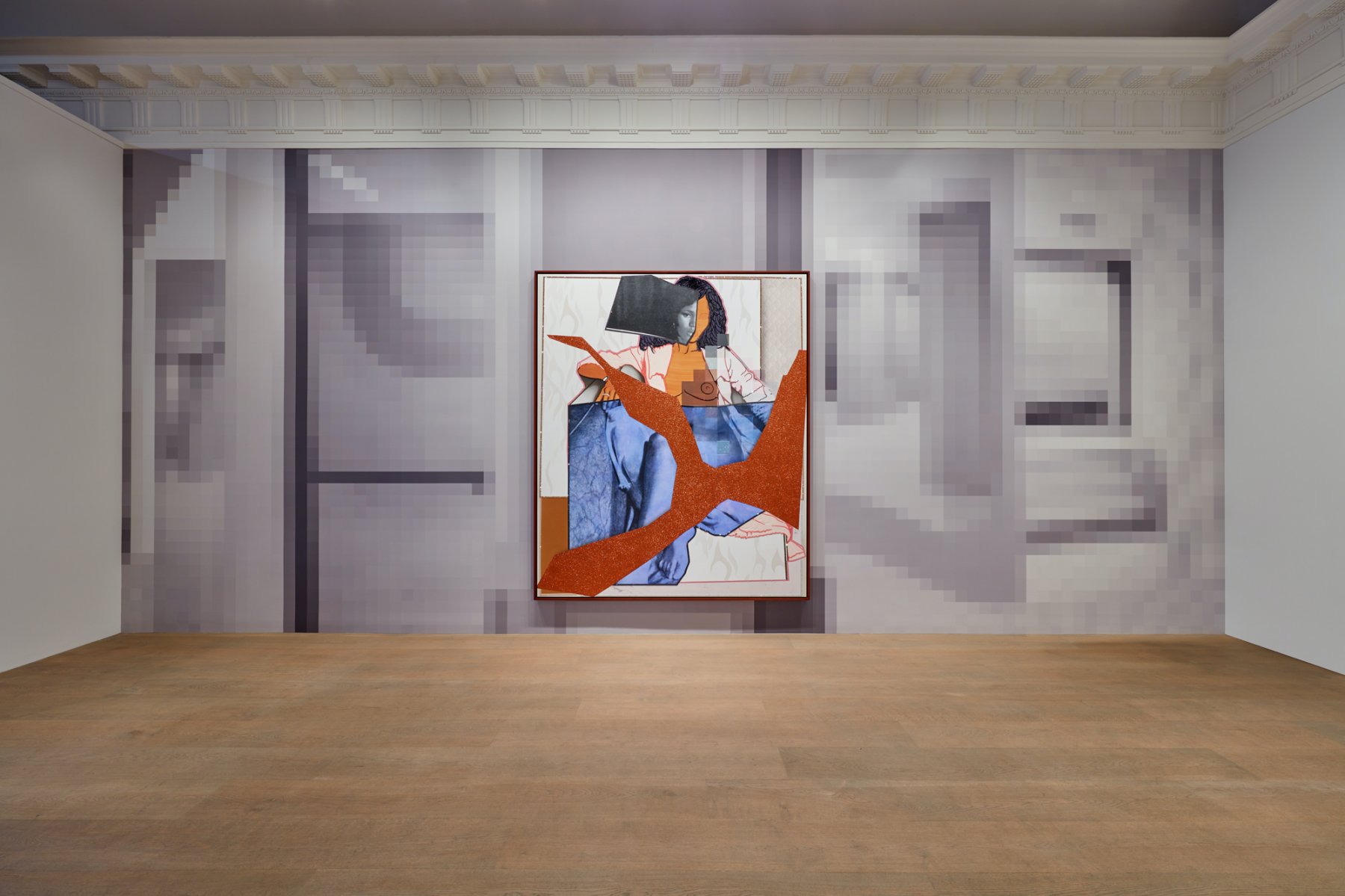 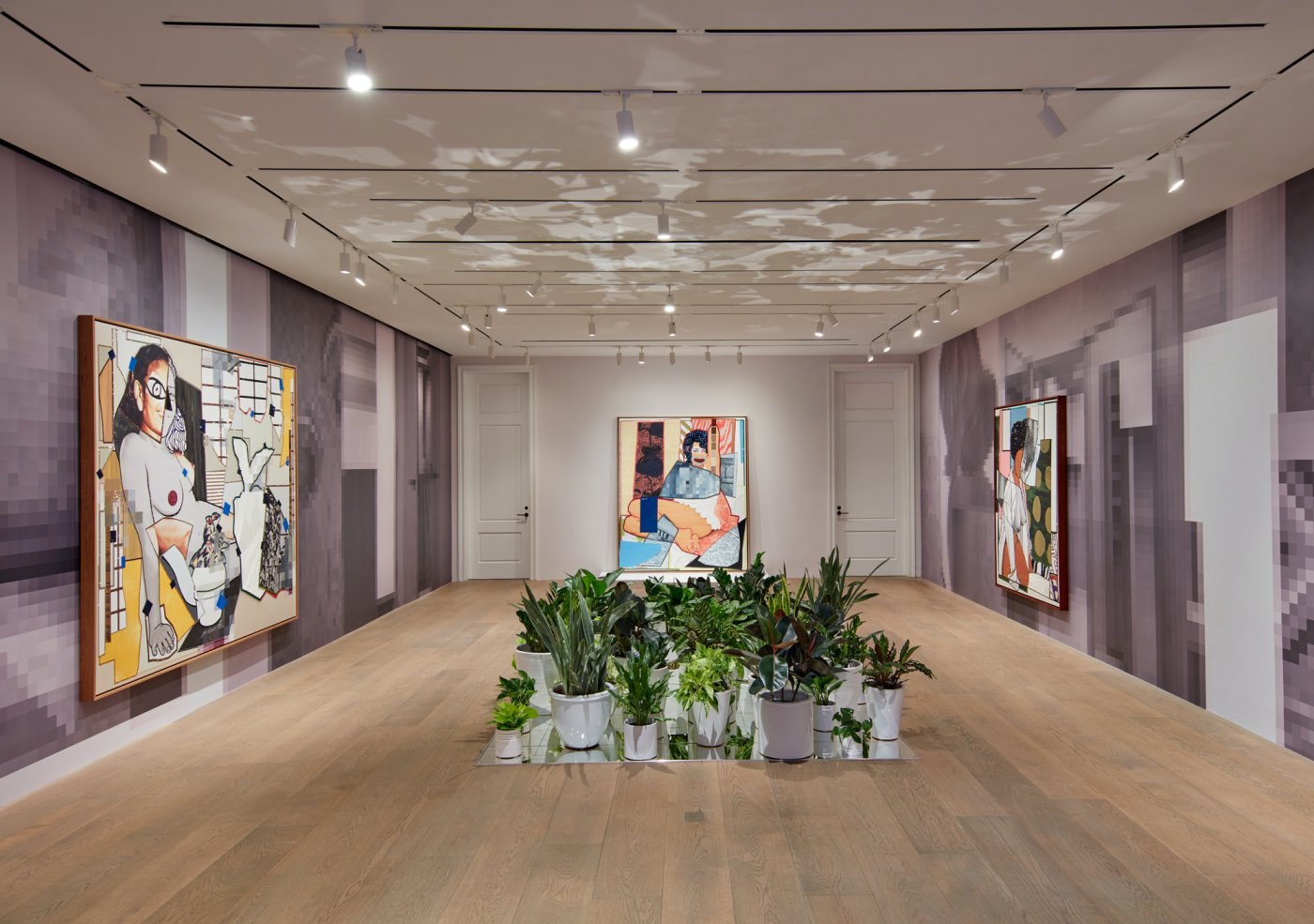 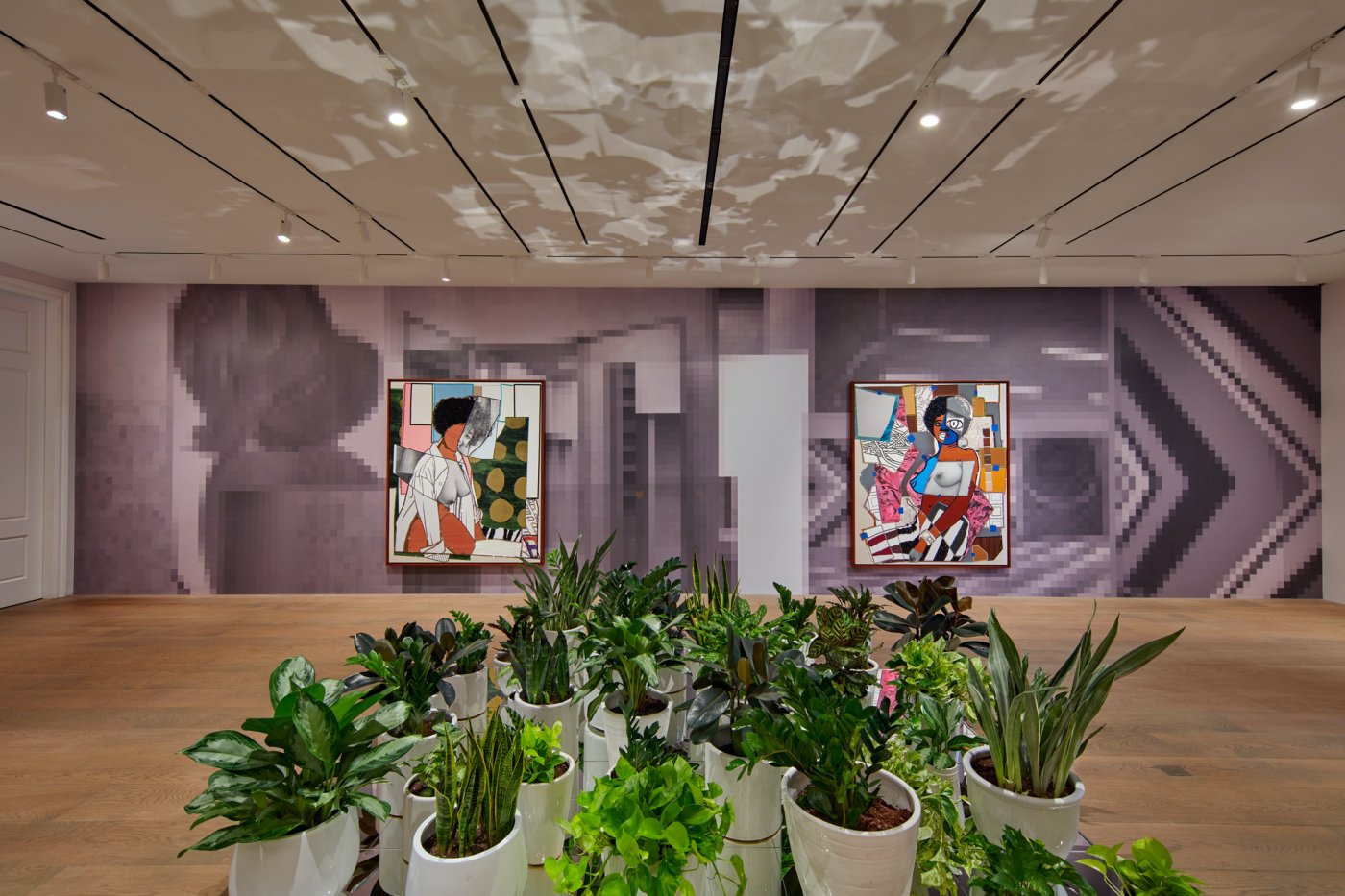 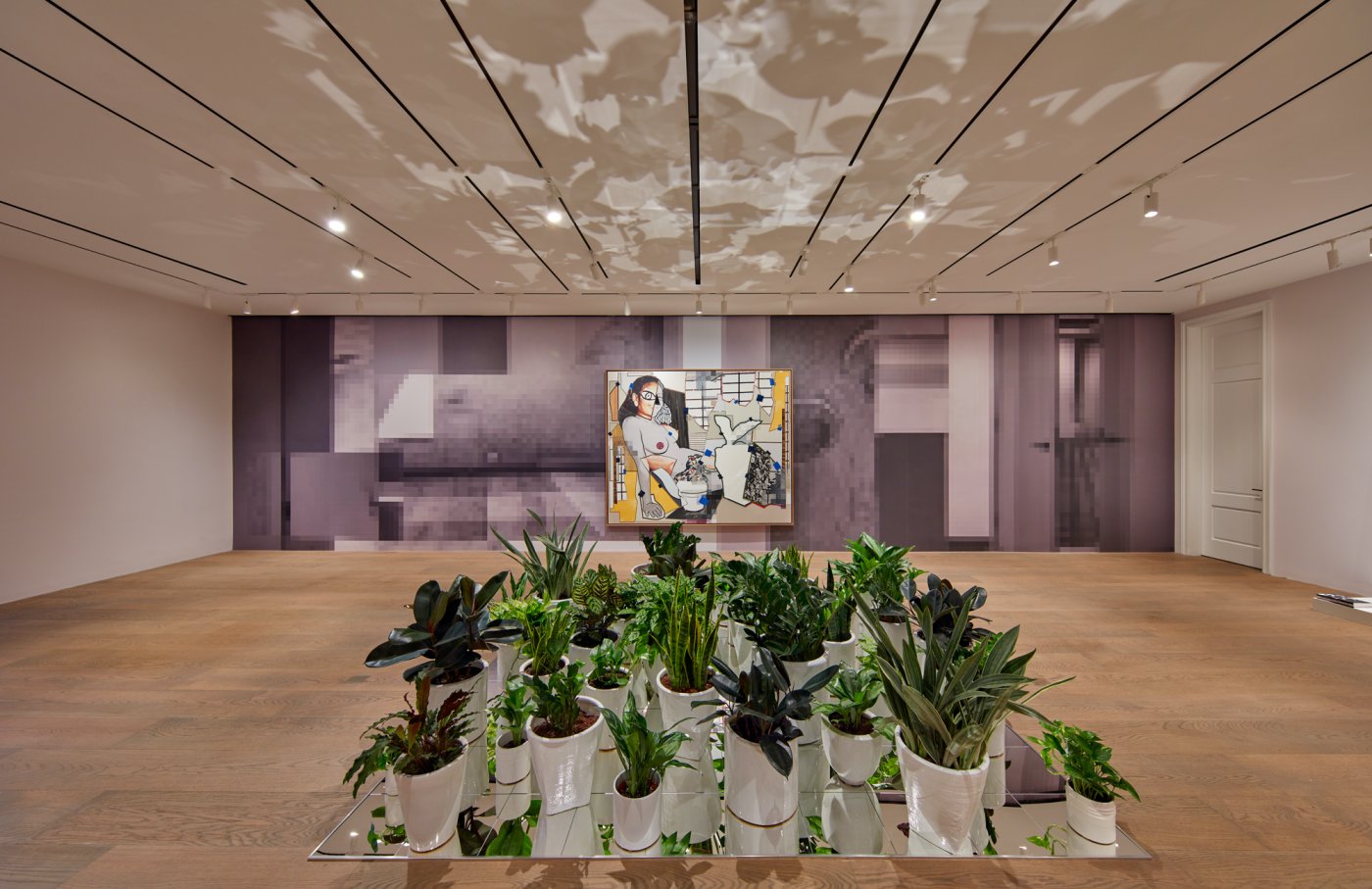 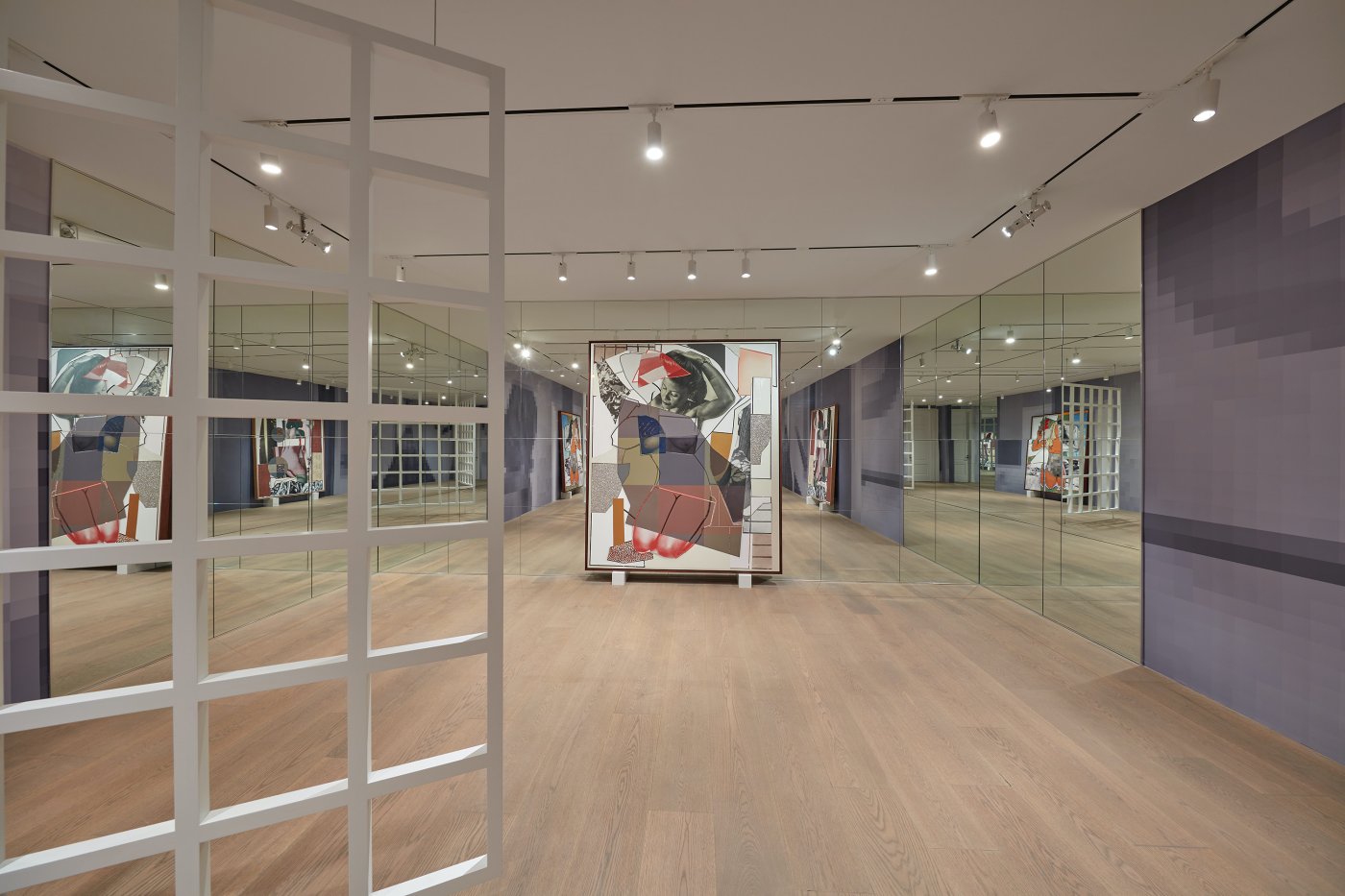 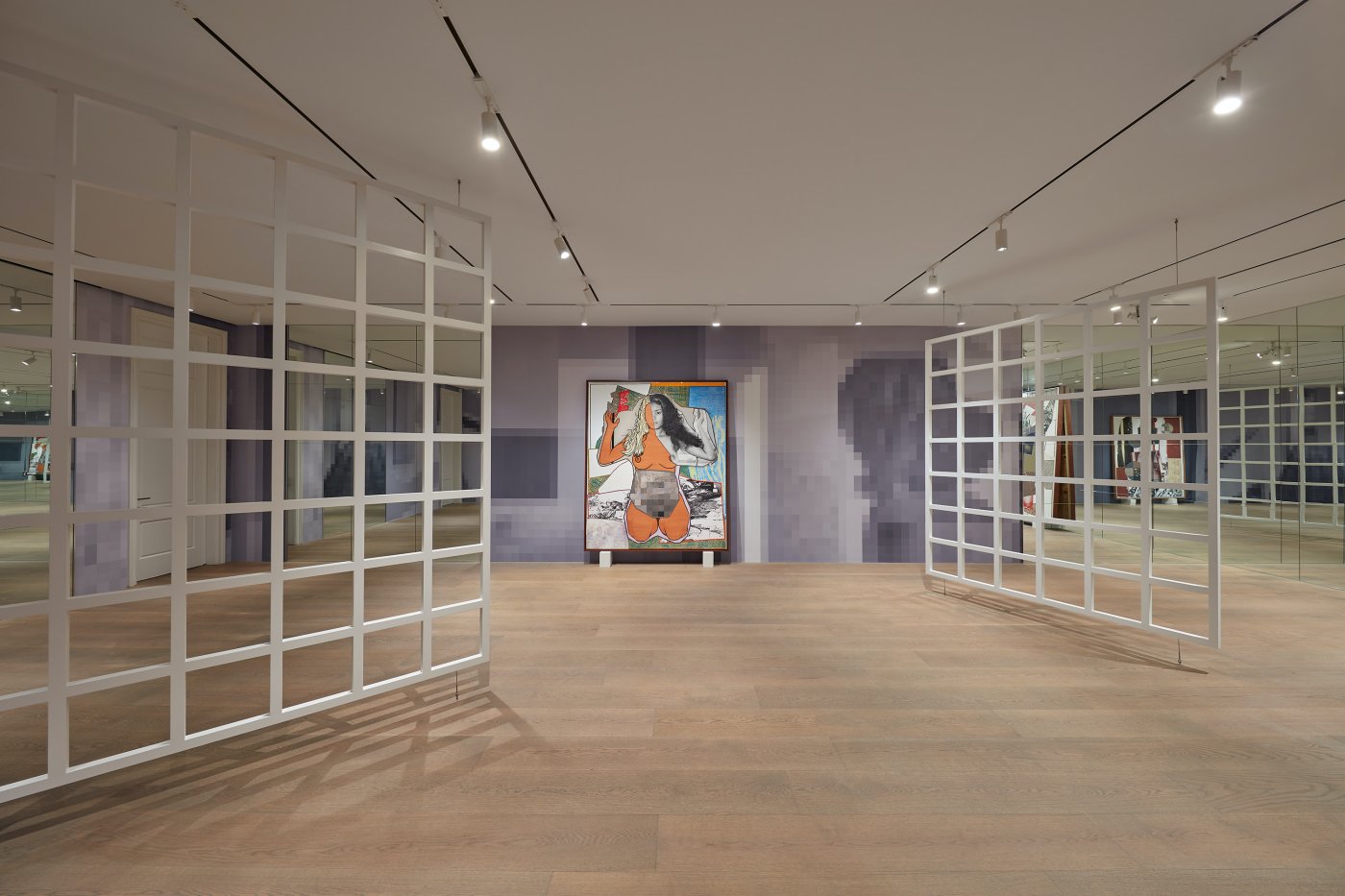 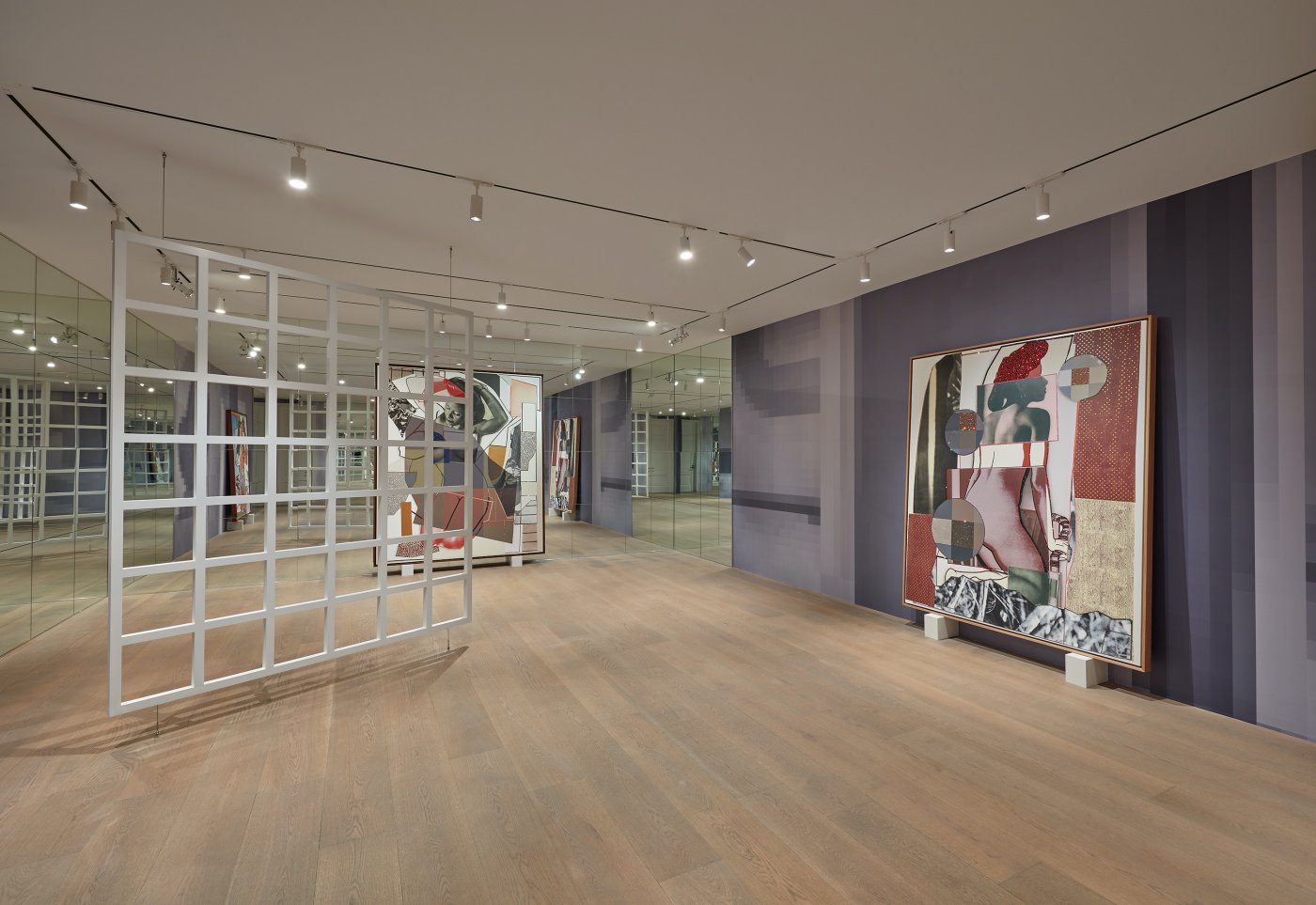 Over the past 20 years, Thomas has cultivated a distinctive vocabulary of Black queer aesthetics and thought, both within her multidisciplinary practice and through her often collaborative approach to producing and exhibiting her work. With the sequential premieres of Beyond the Pleasure Principle in the gallery’s locations in New York, London, Paris, and Hong Kong, Thomas sets out to formally, spatially, and philosophically draw attention to the central study of her art: the power and desirability of Black women, and their presence, imprint, and legacy in global avant-garde visual culture.

Alluding to a 1987 hit song by Janet Jackson and a 1920 landmark essay by Sigmund Freud, the title Beyond the Pleasure Principle signals Thomas’ personal, artistic, and political intentions while also acknowledging the intersection of influences and techniques that underlie her work.

In New York, the inaugural chapter of the exhibition will debut ten large-scale paintings composed of silkscreen, oil and acrylic paint, and rhinestone application, and featuring images of archival photos of Black women sourced from vintage Jet pinup calendars. Here, departing from the artist’s well-known practice of choosing friends, family, and lovers as models, Thomas widens her consideration of the representation of Black women’s bodies in art, media, and politics to include existing images from the 1970s. By overlaying these vintage images with abstract and geometric gestures and interventions— the exaggeration of archetypal emblems of beauty such as lips, eyes, and hair—Thomas invites us to reflect on the complex forces that shape our understanding of beauty, desire, identity, and power. Through her use of Jet pinup models, Thomas reclaims, in imagery and spirit, the power and agency of these anonymous women, transforming them from objects of desire to authors of their own narratives.

As a prominent chronicler and voice of African-American politics and daily life in the postwar era, Jet magazine (published by the Johnson Publishing Company form 1951–2016) challenged common perceptions within American society through its unflinching coverage of the violent realities of white supremacy as well as its reporting on the everyday interests of African Americans, which included aspirational features that uplifted Black celebrities, artists, and intellectuals. The magazine routinely featured “Beauties of the Week” in an effort to defy Eurocentric beauty standards and promote the enterprises of young Black women. For Thomas—whose own work has long depicted the beauty and power of Black women in order to subvert the material and cultural oppression and marginalization to which they have been subjected—engaging in a cultural touchstone like Jet underscores her determined commitment to visibility, and historical and contemporary celebrations of Blackness, femininity, and queerness.

In the works debuting in New York, Thomas engages the formal language of the avant-garde of the late 19th and 20th centuries—which emphasized freedom, fluidity, experimentation, and the dismantling of hierarchies—within the political paradigm of Black liberation, itself a vanguard of American thought and culture.

In American modernity, the truth of this influence is evidenced by Black life and art that essentially reshaped the national cultural landscape, from the Reconstruction period and the Great Migration, to the Harlem Renaissance and New Negro movements, and almost every American genre of music from Blues and Jazz to Rock n’ Roll and Hip Hop. Yet, despite their influence, the survival of Black people in a society where white is still seen as default is contingent on adapting, shifting, and molding the Black self – culturally, aesthetically, and otherwise – to fit within Eurocentric ontologies. This historical discard of Blackness from positions of visibility and societal advancement, and the transference of major cultural advancements rooted in Black diaspora arts, culture, and political movements to solely white protagonists, has long obscured the true extent to which their influence shaped modern American culture.

Through postmodernist and postcolonial discourses, academics and artists, like Thomas, have critically and formally represented the hybrid reality long obscured by a monolithic thinking of modernism as a white, male reinterpretation of the world, which merely appropriated so-called primitive art as a formal device. American historian Dorothy Ross offers a framework for understanding the origins of modernism outside of a white cultural expression, asking whether cognitive modernity, which challenged Enlightenment- ordering of the world, particularly the subjugation of Black people, brought about aesthetic modernity; or whether modernity in the arts—traced to African, Indigenous, and Black art traditions—catalyzed a new cultural mentality that bore modern thinking. Whichever came first, it is clear that modernity was not a top down reordering of the world, but rather an influence that flowed both ways.

It is in this critical intellectual space that Thomas engages in the formal traditions of modernism, not as an outsider but as the rightful heir to modernity’s cognitive and aesthetic characteristics. Her longstanding engagement with collage, and the fracturing of the picture plane, she attributes to Romare Bearden, Jacob Lawrence, and Faith Ringgold, as well as Picasso and Henri Matisse, a reflection of the inherent fluidity of the form as an expression of modern ideology, and the diverse influences which inform it. In choosing to anchor her own work within this spectrum, Thomas uses collage to build upon the tradition of the form, preserving and elaborating on the medium as a mechanism for iconoclastic sensibility and social protest.

About Beyond the Pleasure Principle
Beyond the Pleasure Principle is an international exhibition unfolding across Lévy Gorvy’s spaces in four global capitals—New York, London, Paris, and Hong Kong—over the course of fall 2021, unveiling interconnected bodies of new work by acclaimed American artist Mickalene Thomas. This multisite presentation will feature paintings, installations, and video works that expand Thomas’ decades-long exploration of the Black female body as a realm of power, eroticism, agency, and inspiration, as well as a vehicle for reformulating visual idioms of modernism inherited from some of the 20th century’s most influential masters. Presented in uniquely designed environments for each of the four locations, Thomas’ exhibition will also include a video made in collaboration with her life partner and muse Racquel Chevremont, an art advisor, curator, and collector.

About the artist
Mickalene Thomas (b. 1971 Camden, NJ; lives and works in Brooklyn, NY) is a visual artist, filmmaker, and curator known for her paintings, collages, photographs, videos, performances, and large-scale installations that draw from and critique art history and popular culture in order to present nuanced representations of femininity, sexuality, desire, and power. Blurring the distinctions between abstraction and figuration, object and subject, real and imaginary, Thomas constructs portraits, landscapes, and interiors that subvert notions of beauty and examine how identity, gender, and subjectivity have been informed by the fetishization of the female body throughout history. The artist’s enduring use of collage as a medium, method of abstraction, and conceptual form, has permeated every facet of her practice. By repurposing and recontextualizing found images from the artist’s personal archive, in addition to mass produced imagery from visual culture, Thomas creates formally complex compositions, imbued with narrative depth, that engage alternative, active modes of looking, and propose a new visual language.