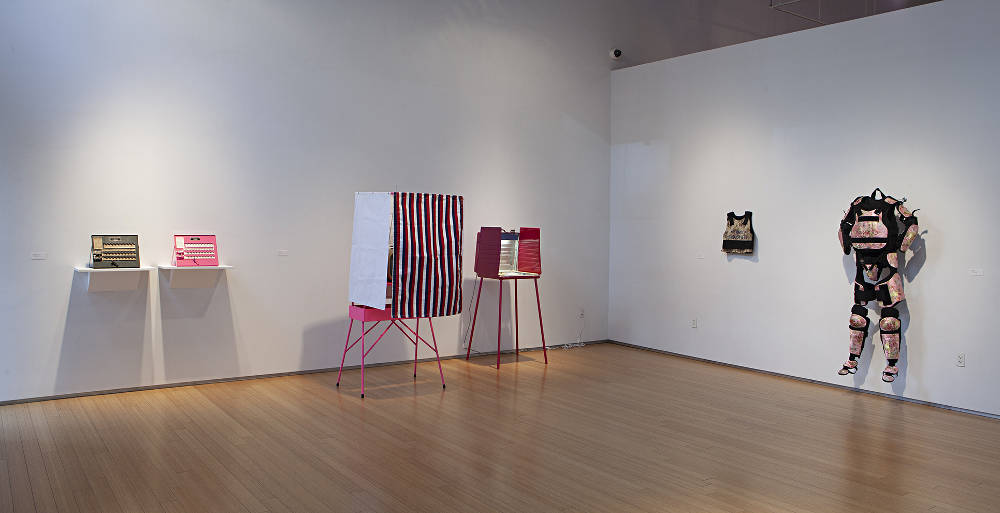 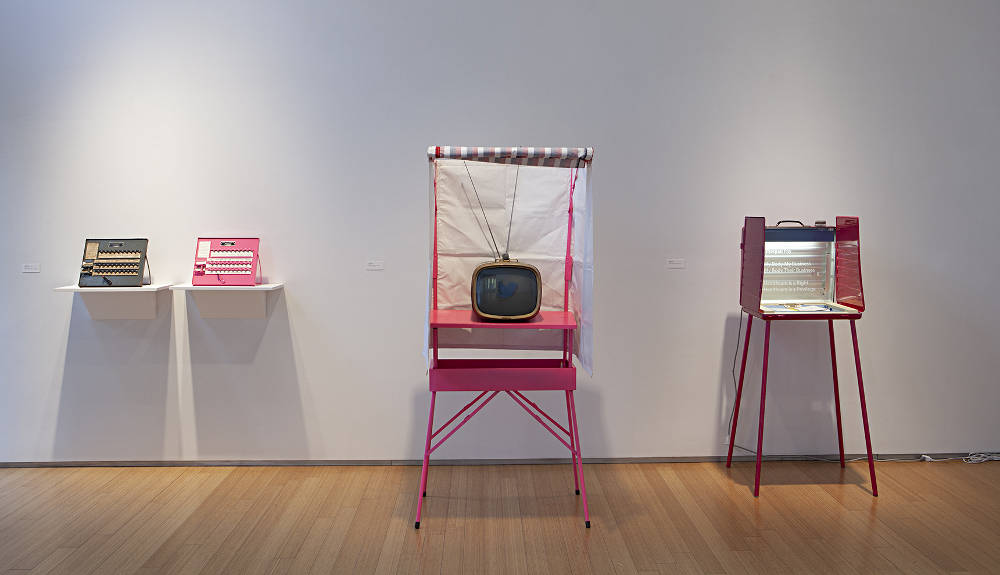 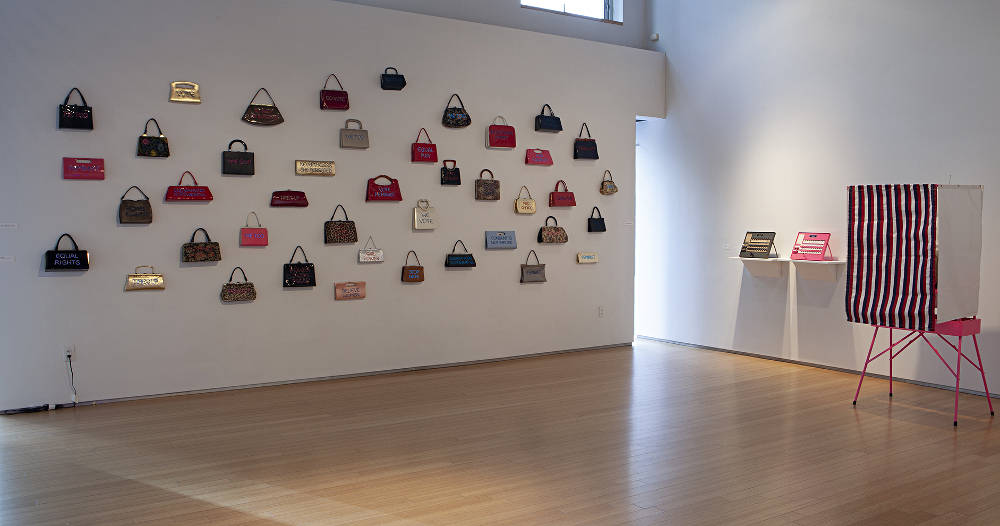 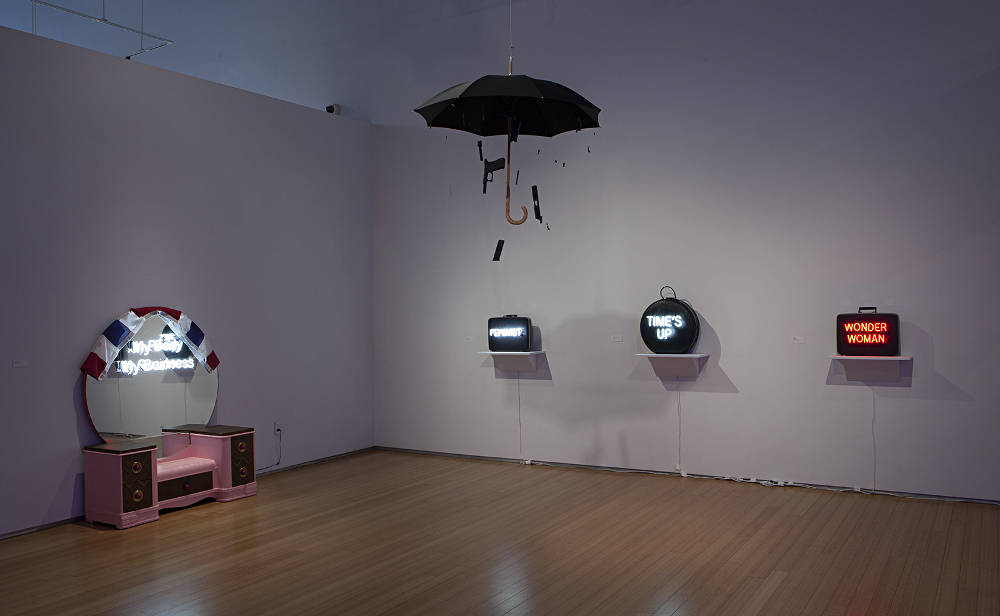 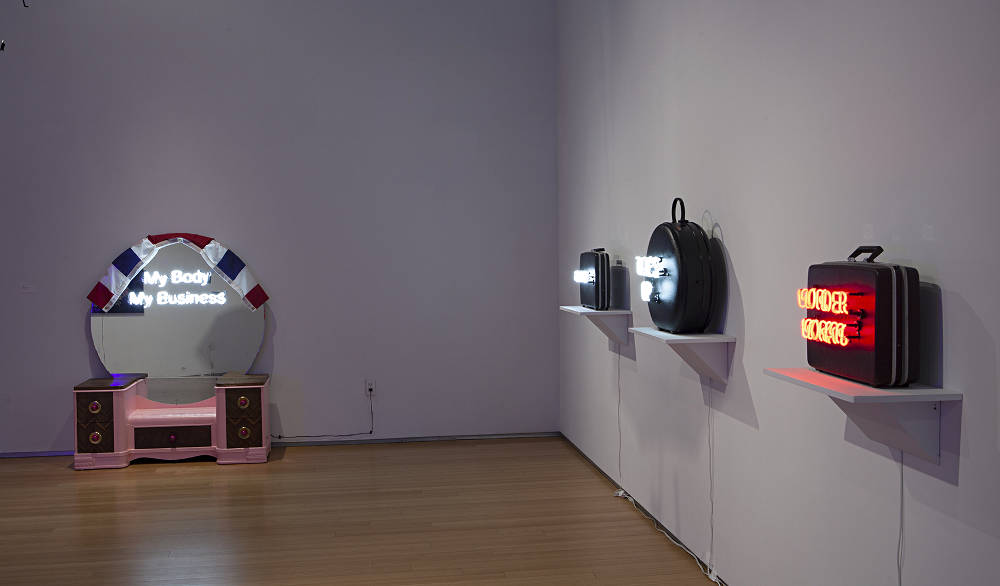 The title of Pred’s show is simple and clear. Vote Feminist is a call to resist the hateful, fear-based, misogynistic policies of the current American government. It is a call to vote in November to elect officials who will represent the true majority in this country while protecting and empowering the disenfranchised.

The call to electoral action is best represented by a series of authentic, manipulated, full-size voting booths. This is where our voices can truly be heard, if we speak up and take seriously the obligations of being part of a civil society. Other work draws attention to the violence and inequities of our culture, and seeks to inspire civil action to change our world for the better. Pieces like Blue Rain, a suspended umbrella dropping handgun parts, are part of Pred’s most recent work focusing on the violence perpetrated by Police forces that are tasked with protecting us. Violence and power are also represented in riot shields and bullet-proof vests, emblazoned with feminist slogans and/or covered with soft tapestry.

Michele Pred continues to explore inequities in valuing women, and the imbalance of power it reflects and supports. Wage Gaps, a series of precisely cut dollar bills, depict the spectrum of wage inequality across racial groups. Wage Gaps exemplifies rampant gender-based racism that still exists today. Vintage purses glowing with feminist messages in electroluminescent wire are designed to take the fight out of the gallery and into the streets.

While these issues have always been important, and even urgent for many Americans, they are nothing less than dire emergencies now that we face a decades-long period of reversals engineered by the Trump administration and supported by its Supreme Court picks. Resist now!

On November 3, 2018 Michele Pred will bring her feminist art parade, Nevertheless We Vote, to Washington Square Park in New York City with a focus on the mid-term elections. Designed to bring politically motivated art out of galleries and studios and on to the streets, Pred’s parade is made up of artists that combine performance and activism with their portable projects.
Nevertheless We Vote is the latest in a string of overtly political art actions that Ms. Pred has produced over the last several year, both individually and in collaboration with other artists. In December 2017 Ms. Pred curated the Parade Against Patriarchy in Miami during Miami Art Week. For that version she invited women artists to participate. For the New York parade, the scope will be expanded to include male artists and their art. Confirmed artists include Michele Pred, Ann Lewis, Yvette Molina, Bayete Ross Smith, Ayana Evans, Christen Clifford, Daniela Puliti, Angie Wilson, Holly Ballard Martz and Bud Snow. Invited but not yet confirmed artists include Hank Willis Thomas, Guerrilla Girls, Derrick Adams, Jeremy Dean, and more.
The National Institute for Reproductive Health and Gun by Gun will be participating in the parade. Pred is also inviting a variety of additional social justice organizations to participate including Black Lives Matter, Institute for Women’s Policy Research, NYSYLC and NARAL.

Michele Pred is a Swedish American conceptual artist whose practice includes sculpture, assemblage, and performance. Her work uncovers the cultural and political meaning behind everyday objects, with a concentration on feminist themes such as equal pay, reproductive rights, and personal security. Pred’s projects also contain social components that drive the conversation into public spaces. Pred has been represented by the Nancy Hoffman Gallery in New York since 2004. Her work is part of the permanent collection at the Berkeley Art Museum, the 21st C Museum, the Fashion Institute of Technology (FIT) in New York, and the 9/11 Memorial Museum in New York. Pred received a Pro-Choice Leadership Award from Personal PAC, Chicago, and has shown at Jack Shainman Gallery as an original member of the first artist-run super PAC, For Freedoms. Pred received her BFA from California College of the Arts, Oakland, California. Her work has been reviewed and featured by The New York Times, The New York Observer, The LA Times, The International Herald Tribune, ARTnews, Art in America, WIRED, Huffington Post, Rachel Maddow, TimeOut New York, and The San Francisco Chronicle.

Courtesy of the artist and Nancy Hoffman Gallery, New York