Galleria Continua presents “Una cosa non esclude l’altra – One thing doesn’t exclude the other”, an exhibition which brings together two personal shows: those of Michelangelo Pistoletto and Pascale Marthine Tayou. 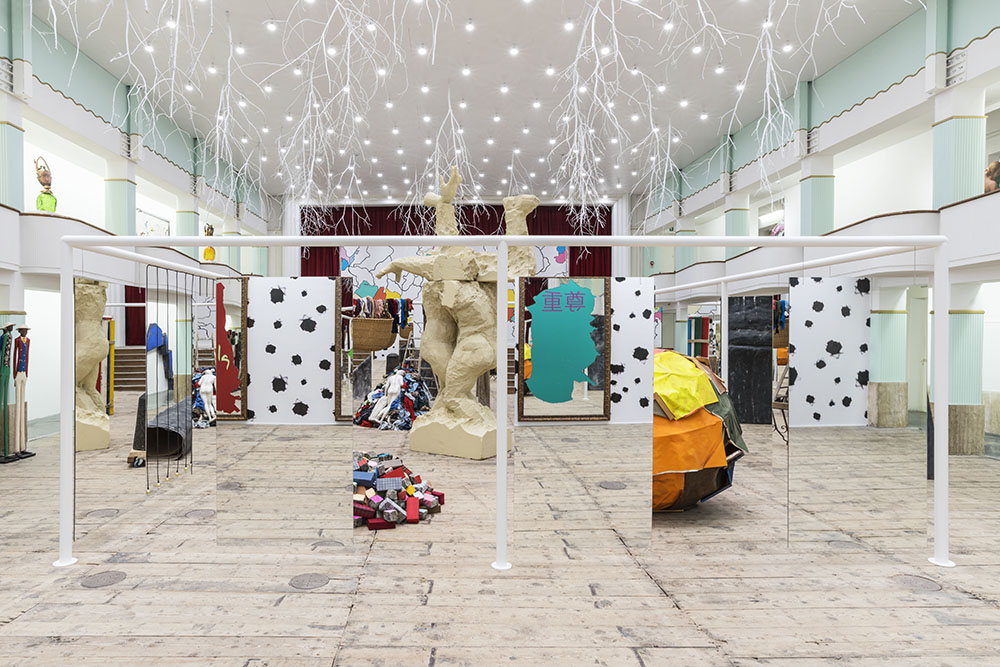 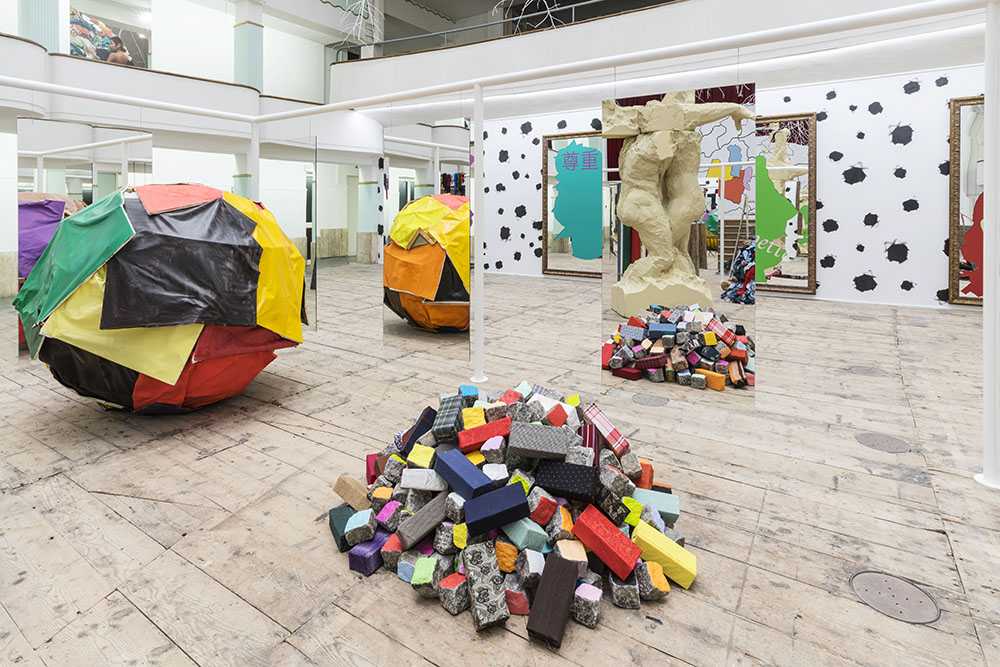 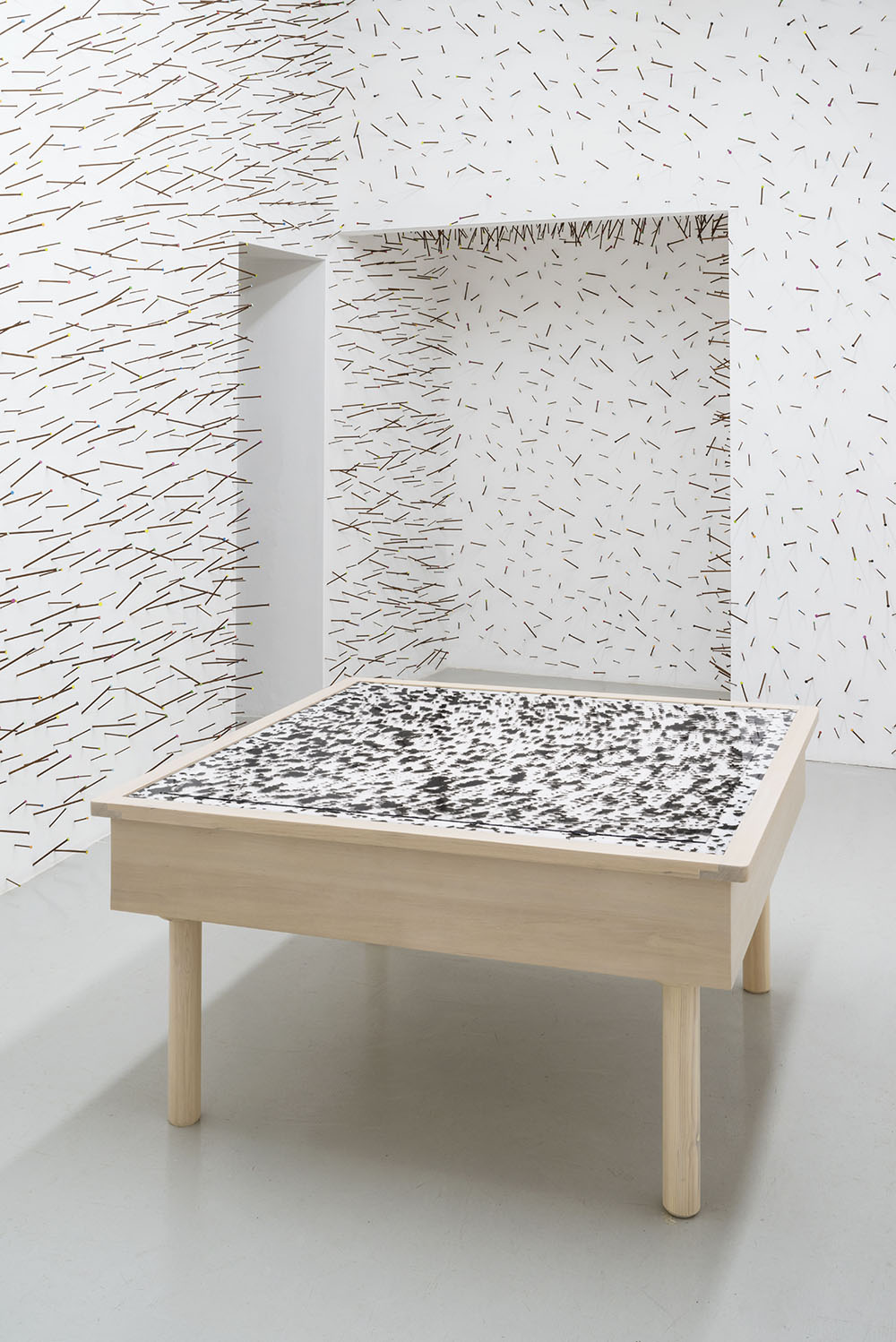 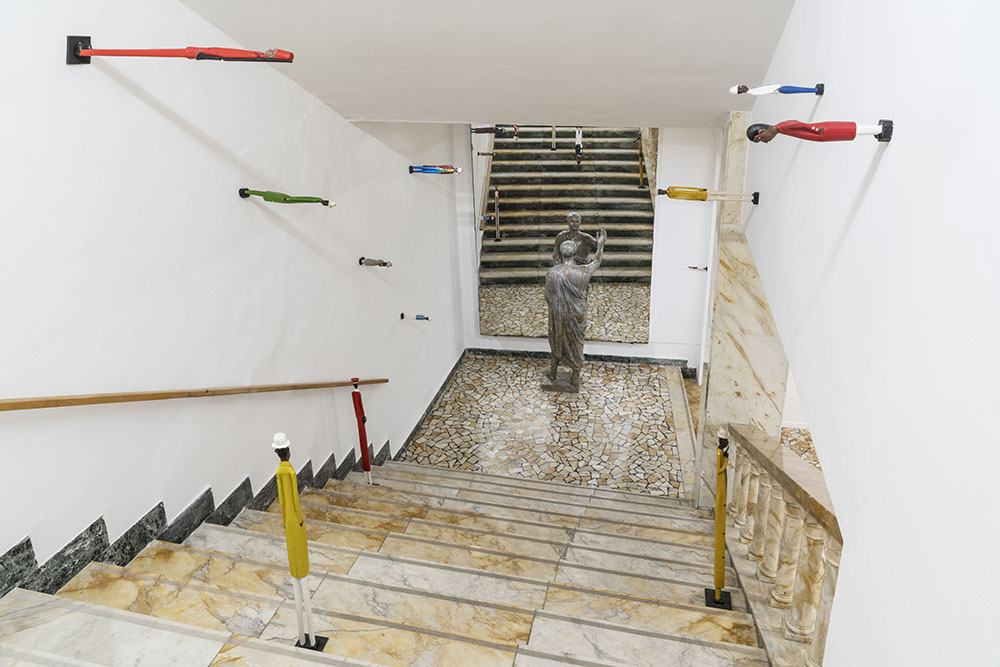 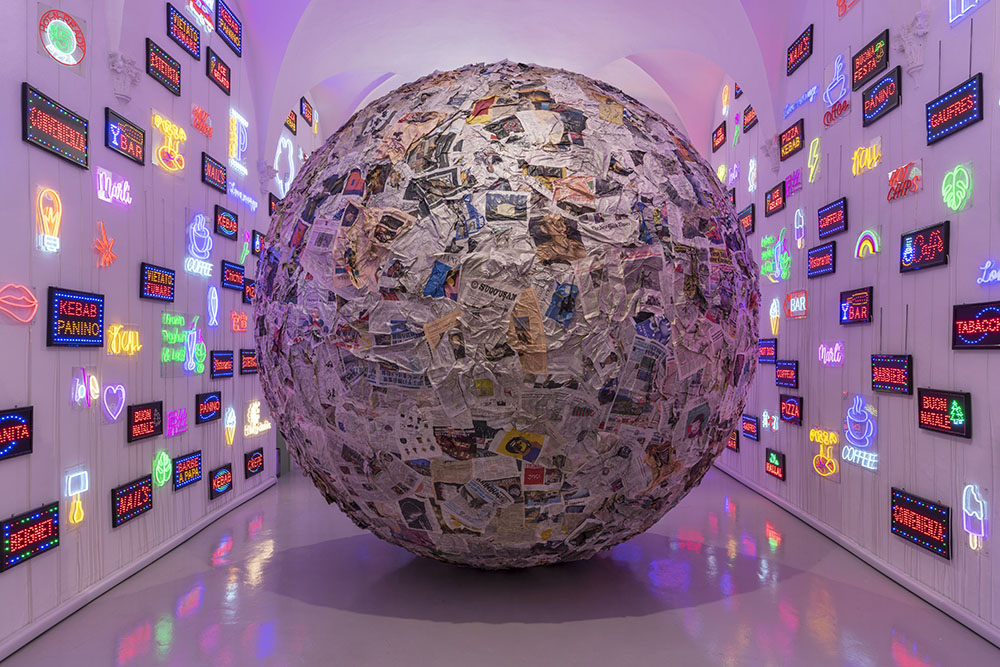 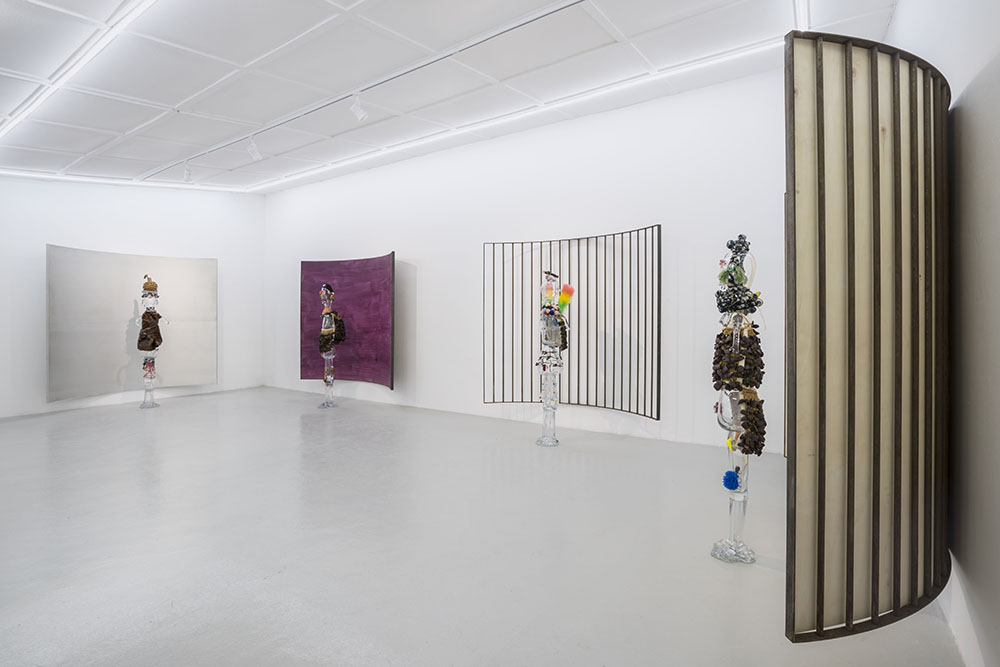 It represents a creative dialogue, treading a path which weaves together differences and oppositions, and explores the coexistence of humanity and otherness. Addressing Tayou, Pistoletto declares: “As one and one make three, I am happy to be doing this exhibition with you.” If we take as our point of departure Pistoletto’s main focus as an artist, the exploration of ‘creative duality’, this phrase captures the symbolic significance of the show: that of bringing into contact two seemingly distant elements in order to give rise to a uniting third force. Tayou, whose art has a very global approach, mixing cultures and a variety of geographical stimuli, replies: “Thank you, I am happy with this exhibition, and since I am hugely impatient I will arrive early for the appointment so as not to miss this unique occasion!”

Michelangelo Pistoletto and Pascale Marthine Tayou both create art which is open to dialogue and exchange. Their works are testament to a process of continual evolution and expansion, aimed at refreshing the point of contact between the artistic experience and the external world. A dialogue – in the case of Pistoletto’s multi-disciplinary practice – in which multiple voices take part, as his aesthetic is based on a form of relationship and participation which goes beyond the confines of the work. Tayou’s work on the other hand seeks to redefine postcolonial issues via the European experience, and to reflect on questions such as immigration, the role of the individual, and national and cultural identity.

The show opens with one of Pistoletto’s most emblematic works: “Grande sfera di giornali – Progetto per un museo” (Large sphere of newspapers – Project for a museum). The first sphere was created by the artist in 1966 and was rolled through the streets of Turin in December 1967, a performance known as “Scultura da passeggio” (Walking sculpture). The newspapers that Pistoletto used to make that first sphere carried reports of the troubles rocking Italy at the end of the Sixties. At the time Pistoletto made a model, which was then built for the first time at the 1976 Venice Biennale. On the occasion of the show in San Gimignano, Pistoletto creates a new sphere, more than three metres in diameter, covered with papers from all over the world and bearing witness to the current events of our time. Hanging on the walls in the same room are a series of LED writings by Pascale Marthine Tayou, sketching out the concept of the global village as the stage upon which the daily confluence of our lives takes place.

In Tayou’s work, his interest in materials and their significance predominates. For this exhibition he uses rusted nails with different coloured heads as his contribution to a dialogue with Pistoletto’s “Rotazione dei corpi” (Rotation of bodies). The work comprises two transparent sheets upon which a portion of the universe is reproduced. By moving these two elements, the point around which all the stars of the universe rotate can be continually changed. For the two artists, no unique centre of the universe exists; rather, every point is the centre. In the same way, each individual is the centre of society.

Pascale Marthine Tayou’s work is intentionally mobile and always closely tied to the idea of the journey and the encounter of the self with the other. For him, the traveller represents not only a literal circumstance but also a psychological condition, capable of subverting our social relations and political, economic and social systems. In the exhibition this idea meets “Il cesto dello Zoo” (1969) a wicker basket used in some shows of Lo Zoo, a multidisciplinary group formed by Michelangelo Pistoletto and Maria Pioppi together with people from other artistic disciplines: music, literature, theater, visual arts. Between 1968 and 1970, Lo Zoo created a series of shows in squares, discos, breweries, theaters and galleries conceived as creative collaborations and a form of communication not mediated by objects.

The dialogue between the two artists continues with a series of hanging or suspended sculptures and of works arising from gestures, actions, videos and texts, before reaching its conclusion in the parterre. Here, a study of Pistoletto’s past works highlights the interrelation between art and life, mirrors extend space in a continual present, and simultaneously show us our reflection and everything that surrounds us. Tayou presents a gravity- defying forest whilst blown-glass Poupées (Dolls) drift around the space. “Una cosa non esclude l’altra.”

Michelangelo Pistoletto was born in Biella in 1933. In 1962, he made the Quadri specchianti (Mirror paintings), for which he soon received international recognition. Between 1965 and 1966 he produced Oggetti in meno (Minus objects), considered fundamental to the birth of Arte Povera. In the Nineties, he founded the Cittadellarte-Fondazione Pistoletto in Biella, to bring art into active relation with diverse spheres of society with the aim of inspiring and producing responsible social change. In 2003 he won the Venice Biennale’s Golden Lion for Lifelong Achievement. In 2004 the University of Turin awarded him a laurea honoris causa in Political Science, and the artist announced the most recent phase of his work, Terzo Paradiso (Third Paradise). In 2007, in Jerusalem, he received the Wolf Foundation Prize in the Arts, “for his constantly inventive career as an artist, educator and activist whose restless intelligence has created prescient forms of art that contribute to fresh understanding of the world.” In 2011 he was the artistic director of Evento 2011 in Bordeaux. In 2013 the Louvre in Paris hosted his personal exhibition Michelangelo Pistoletto, année un – le paradis sur terre. In this same year he received the Praemium Imperiale for painting, in Tokyo. In 2014 the symbol of the Terzo Paradiso was installed in the hall of the headquarters of the Council of the European Union in Bruxelles for the period of the Italian Presidency of the European Council. In May 2015 he received a degree honoris causa from the Universidad de las Artes of Havana in Cuba. In the same year he realized a large-scale work called Rebirth, situated in the park of the Palais des Nations in Geneva, headquarters of the UN. In November 2016 he held a large retrospective show at the Havana’s Museo Nacional de Bellas Artes, dedicated to past and present works. In 2017 he took part in the 57th Venice Biennial with “One and One Make Three”, a collateral event at the Basilica di San Giorgio. Of particular note in 2018 was his South America tour, among the most important shows of which were those that took place in Lima and Santiago de Chile. His works can be found in the most important modern and contemporary art museums around the world.