A new series of mirror paintings presents the protagonists of these new works, images of people, unclothed, diverse and unique. Without any preconceptions, the human figure is taken in its aesthetic entirety and is used by the artist to demonstrate a cross-section of society. Each individual is shown as equal, facing the beauty of diversity that distinguishes us, of loving our differences, whether they’re linked to ethnicity, culture or religion. 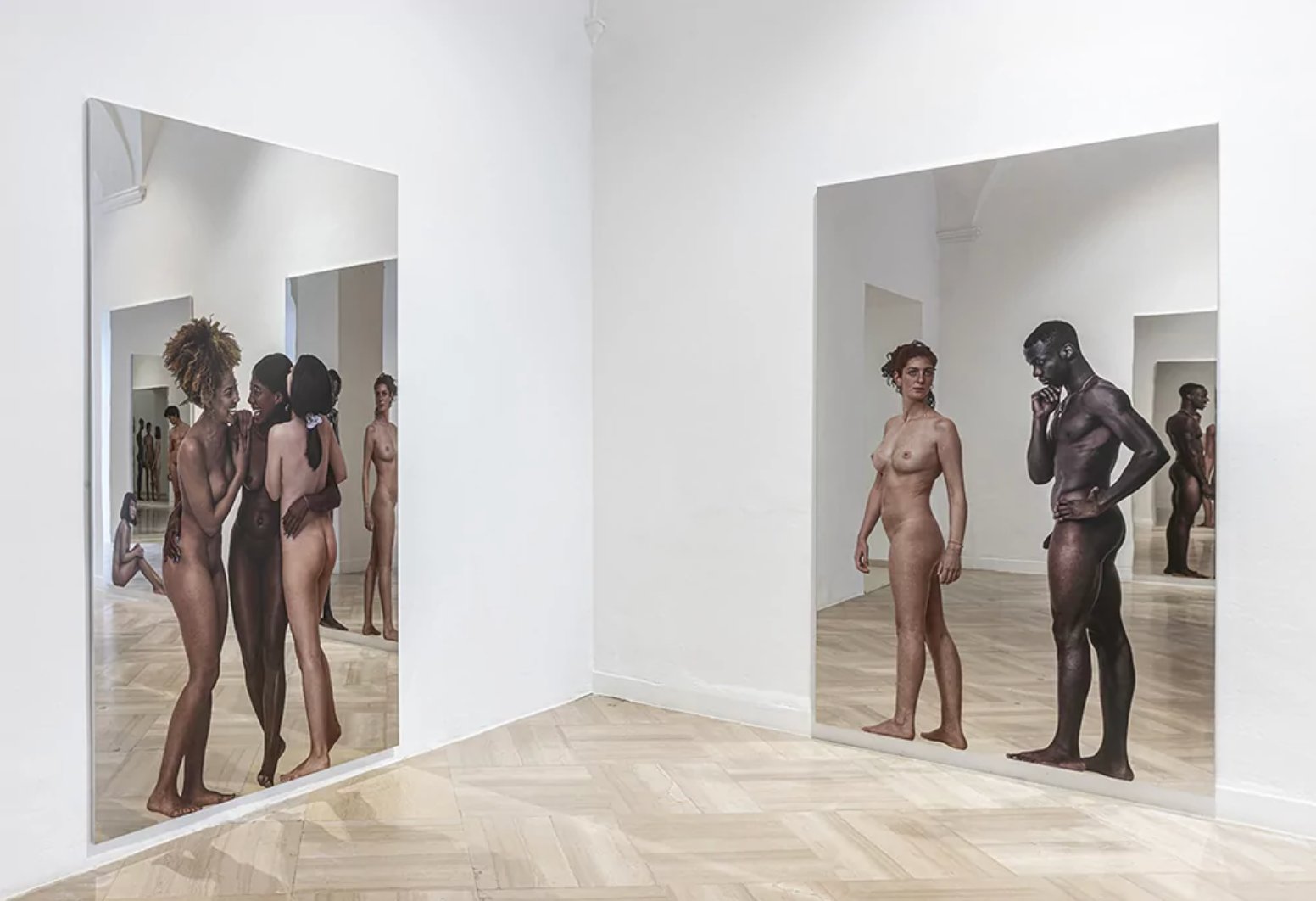 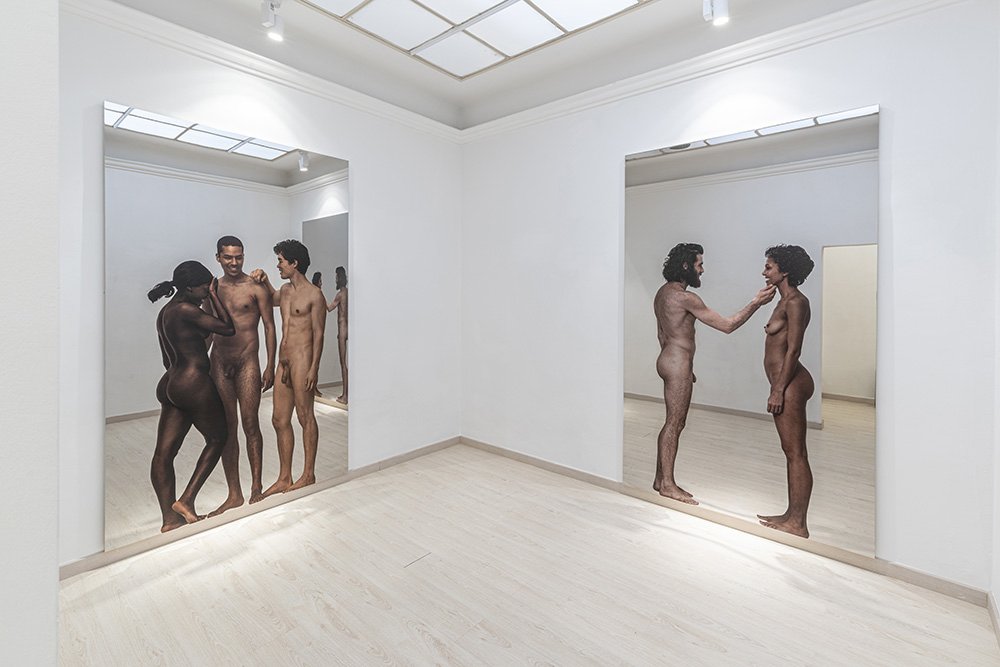 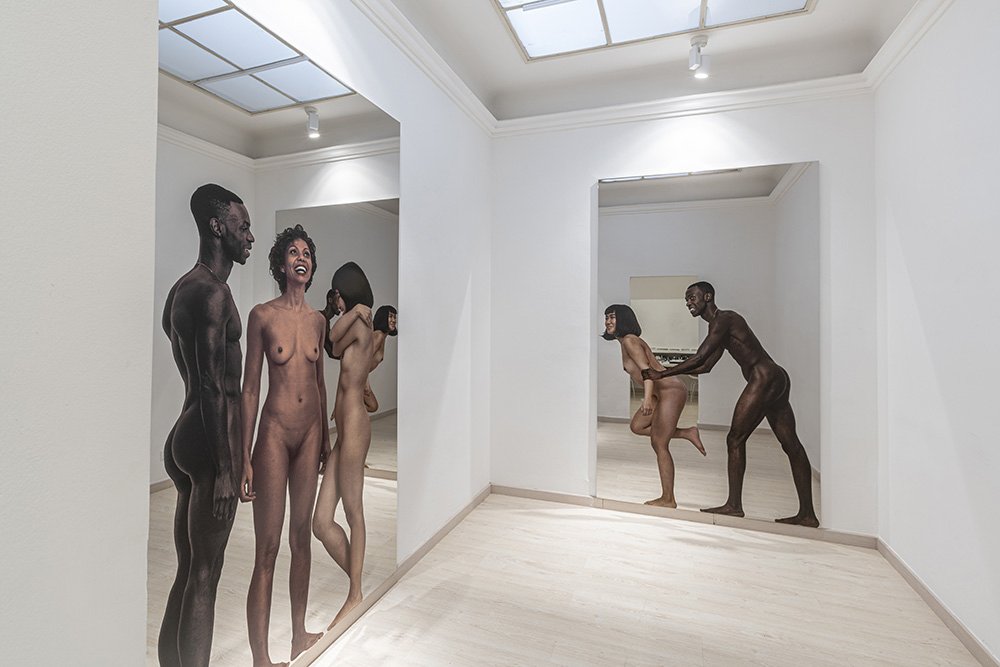 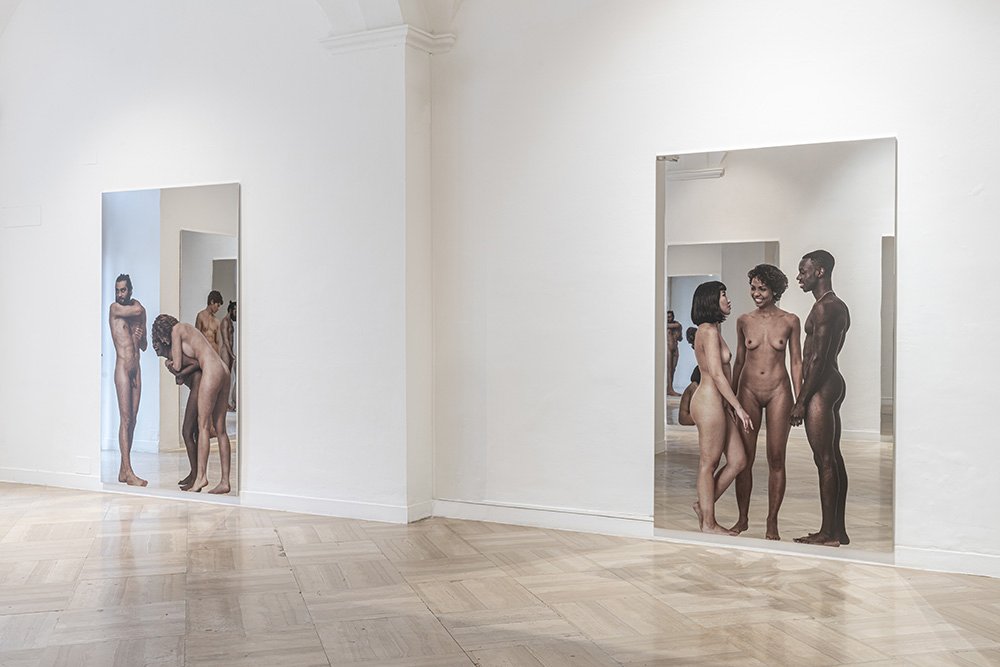 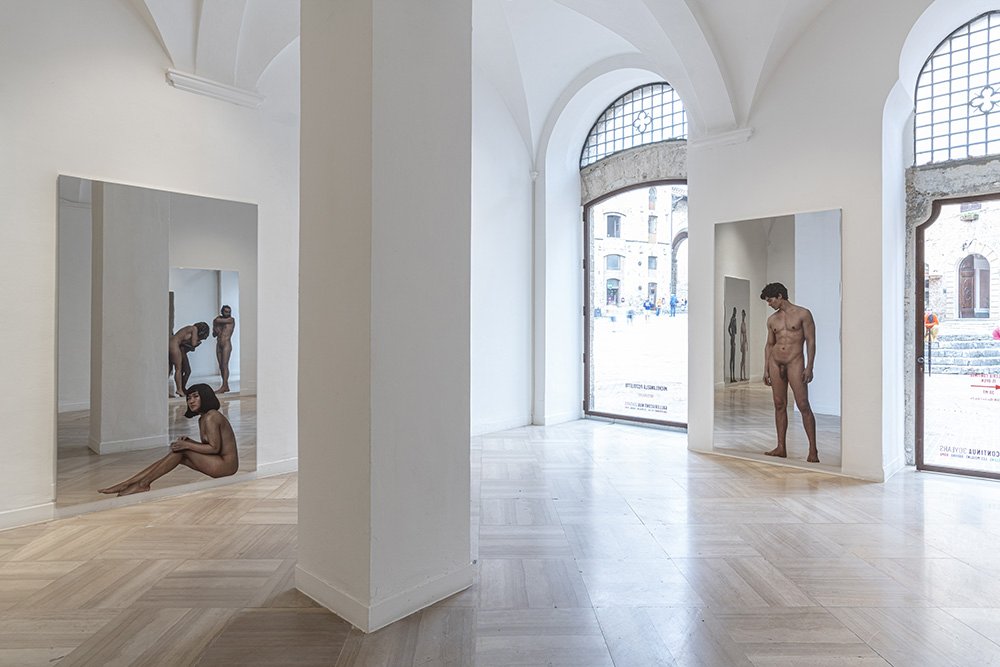 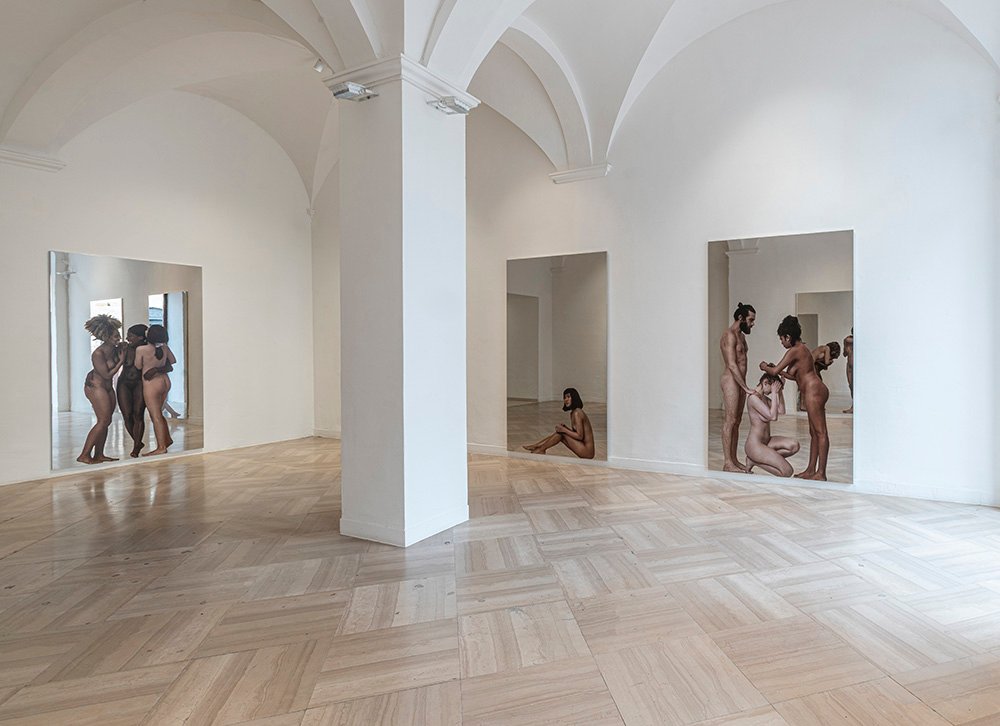 Michelangelo Pistoletto’s solo show occurs in the center of San Gimignano, in Piazza della Cisterna. It’s in this square that Galleria Continua recently opened a new space in which the works of Pistoletto, also in occasion of the 30th anniversary of the gallery this year, will be exhibited. “This year we are living through an unprecedented event, the COVID-19 pandemic that alongside the lockdown caused a total paralysis of human society in each part of the world, Pistoletto declares, these works, conceived last winter, anticipate and interpret this epochal moment like a true exposure of humanity”. The title of the exhibition “MESSANUDO” is an essential part of such an interpretation, as is the entire content of the solo exhibition.

In the exhibition spaces mirror paintings are arranged along the walls, virtually doubling the space and involving the viewer in the exhibition. In each work other people appear, unclothed, they are the life-sized images of naked women and men of different ages, different forms and different skin colors. They are people that, together, represent human kind in all its different biological, ethnic and aesthetic aspects. This humanity, laid bare, is the same humanity that, coming from all over the world, clothed, fills the square in front of the gallery. The artist sees in this exhibition the possibility of being able to embrace each other once again after the conditions, which throughout history up until today, have divided and distanced us in the world.

Pistoletto’s work has many different temporal and narrative planes. In a mirror painting we find the past and the present. A work that constantly changes face, a work in a continuous phase of becoming. The artist works with mirror in a new perspective. That which the viewer sees in front of them, they also see it simultaneously behind them, and therefore finds themselves in the center of a double perspective: towards the future, through the past; and the past infiltrating the future.

“(…) Progress is no longer linear, but circular. It is a turning point, precisely because by turning we can overcome the obstacle of the mirror. Moving away from it we see ourselves entering. While if we continue to go against it, we crash. So, in order to keep going into the mirror we have to do something that is almost like a reverse gear. But a reverse that can be conceived as a turning point. Because we are in a time of turning points (…)” says Michelangelo Pistoletto in a recent interview.

Michelangelo Pistoletto was born in Biella in 1933. In 1962 he created the Mirror Paintings, with which he soon achieved international recognition. Between 1965 and 1966 he produced Oggetti in meno, considered fundamental for the birth of Arte Povera. In the 1990s he founded Cittadellarte-Fondazione Pistoletto in Biella, placing art in an active relationship with the various areas of the social fabric in order to inspire and produce a responsible transformation of society. In 2003 he was awarded the Golden Lion for Lifetime Achievement at the Venice Biennale. In 2004 the University of Turin awarded him an honorary degree in Political Science: the artist announced the most recent phase of his work Terzo Paradiso. In 2007 he received the Wolf Foundation Prize in Arts in Jerusalem, “for his constantly creative career as an artist, educator and activator, whose tireless intelligence has given rise to prophetic art forms that contribute to a new understanding of the world”. In 2011 he was Artistic Director of Evento 2011 in Bordeaux. In 2013 the Louvre Museum in Paris hosts his personal exhibition Michelangelo Pistoletto, année un – le paradis sur terre. In the same year he received the Praemium Imperiale for painting in Tokyo. In 2014 the symbol of the Terzo Paradiso was installed in the atrium of the headquarters of the Council of the European Union in Brussels during the semester of the Italian presidency. In 2015 the Universidad de las Artes de Havana awarded him an honorary degree. In the same year he created a large-scale work, entitled Rebirth, located in the park of the Palace of Nations in Geneva, headquarters of the United Nations Organization. In November 2016 he exhibited at the Museo Nacional de Bellas Artes in Havana with a major retrospective dedicated to his past and present work. In 2017 he took part in the 57th Venice Biennale with “One and One Make Three”, a collateral event at the Basilica of San Giorgio. In 2018, his great tour in South America was particularly memorable, among the most important exhibitions were those held in Lima and Santiago de Chile. In 2019 the Bienalsur hosts “Circuito Pistoletto”, an urban journey through the artist’s most emblematic works, with installations and interventions in various spaces in Buenos Aires, including the Museum of Decorative Arts, the Museum of Fine Arts, the MUNTREF (Museo Tres de Febrero) in the ancient Hotel degli Immigranti and the Benito Quinquela Marti’n della Boca Museum. His works are present in the collections of major modern and contemporary art museums.