Simon Lee Gallery presents works from celebrated Italian artist Michelangelo Pistoletto’s most recent series of mirror paintings, in which he directs his attention towards the subject of scaffali, or shelves. This is the artist’s fourth solo exhibition with the gallery. 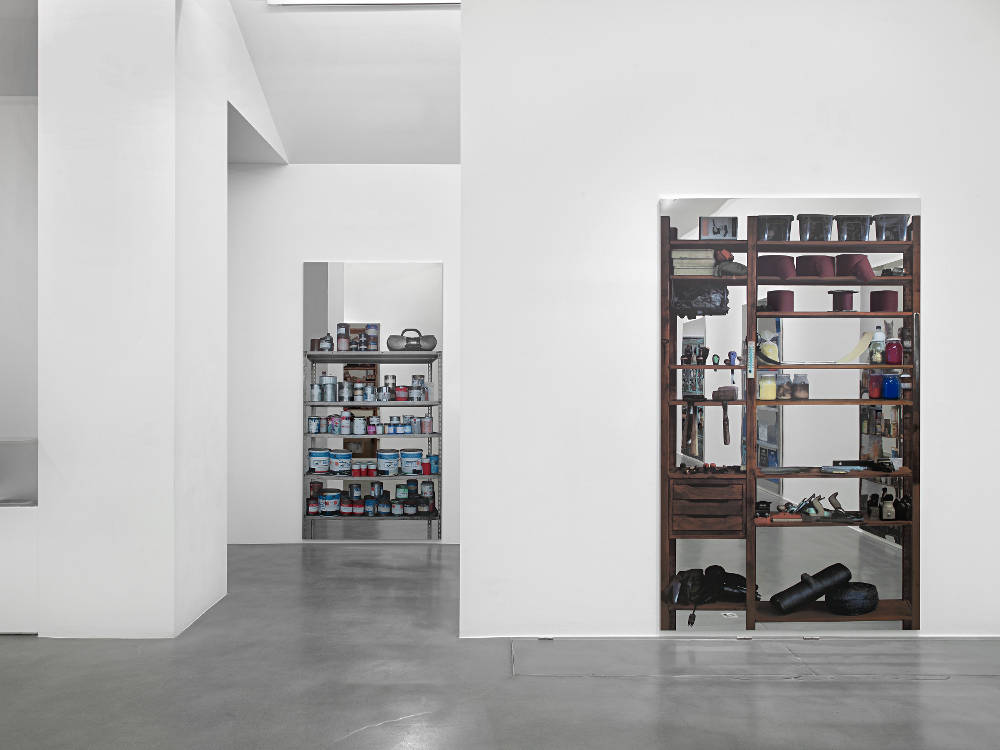 Pistoletto is widely recognised as one of the most influential contemporary artists of his generation and a foundational member of the Arte Povera movement. From early in his five-decade career the mirrored surface has been an instrumental element of his practice. Initiated in 1962, Pistoletto’s signature mirror paintings use the reflective picture plane to draw both viewer and environment into the work, playing with traditional notions of the painted image as a fixed moment in time. With an emphasis on the performative, Pistoletto’s work is profoundly concerned with the active relationship between artwork and spectator, and the creation of a virtual space in which art and life seamlessly interact. ‘The mirror paintings’, he wrote in 1969, ‘could not live without an audience. They were created and re-created according to the movement and to the interventions they reproduced’.

In the Scaffali Pistoletto takes his investigation into the relationship between stasis and activity in the mirror paintings a step further. Depicting display cabinets and industrial storage units laden with the tools of a broad range of trades, from crates of fresh produce and canisters of paint, to cleaning supplies, camera apparatus and spare automobile parts, the Scaffali evoke a sense of dormancy at odds with the ever fluctuating presence of the viewer. Yet just as the spectator introduces a sense of animation into the stillness of the image, each painting evokes an element of anticipation, as though the viewer may at any moment reach for an object on a shelf. In contrast to earlier mirror paintings – many of which either focus on the human figure or consist of a single, graphic object – the Scaffali obstruct the viewer’s presence with their dominant compositions. Made by applying photo-silkscreened images to highly-polished stainless steel, each of these meticulous and unique pictures hinder the interactivity favoured in previous works, instead placing a formal emphasis on the static object.

Michelangelo Pistoletto lives and works in Biella, Italy, where he founded Cittadellarte in 1998, a creative laboratory that works to promote the use of art to engender social change. The primary objective of the Cittadellarte focuses around the Third Paradise, a project conceived in 2003, which aims to unite nature and society in harmonious coexistence. Over the past 50 years Pistoletto has been the subject of numerous solo exhibitions at major institutions and cultural centres, including Museo Nacional de Bellas Artes, Havana, Cuba (2016); Blenheim Palace, Woodstock, UK (2016); Musée du Louvre, Paris, France (2013); Serpentine Gallery, London, UK (2011); MAXXI, Rome, Italy (2011) and Philadelphia Museum of Art, Philadelphia, PA (2010). He has been included in the Venice Biennale on eleven separate occasions, and four iterations of Documenta. His work can be found in significant international museum collections, including the Museum of Modern Art, New York, NY; National Gallery of Art, Washington, D.C.; Tate, London, UK; Centre Georges Pompidou, Paris and Museo Nacional Centro de Arte Reina Sofía, Madrid, Spain.

From the VRchives: Michelangelo Pistoletto @simonleegallery London, presented from 23 February to 7 April 2018 works from the celebrated Italian artist’s most recent series of mirror paintings, in which he directs his attention towards the subject of scaffali, or shelves click the link in our bio to view the exhibition in VR #360 #360art #360photo #VR #VirtualReality #MichelangeloPistoletto #SimonLee #SimonLeeGallery #London #gallery #exhibition #art #painting #figurative #geometry #contemporaryart #modernart #seemoreart #GalleriesNow #lifestyle #ID11875