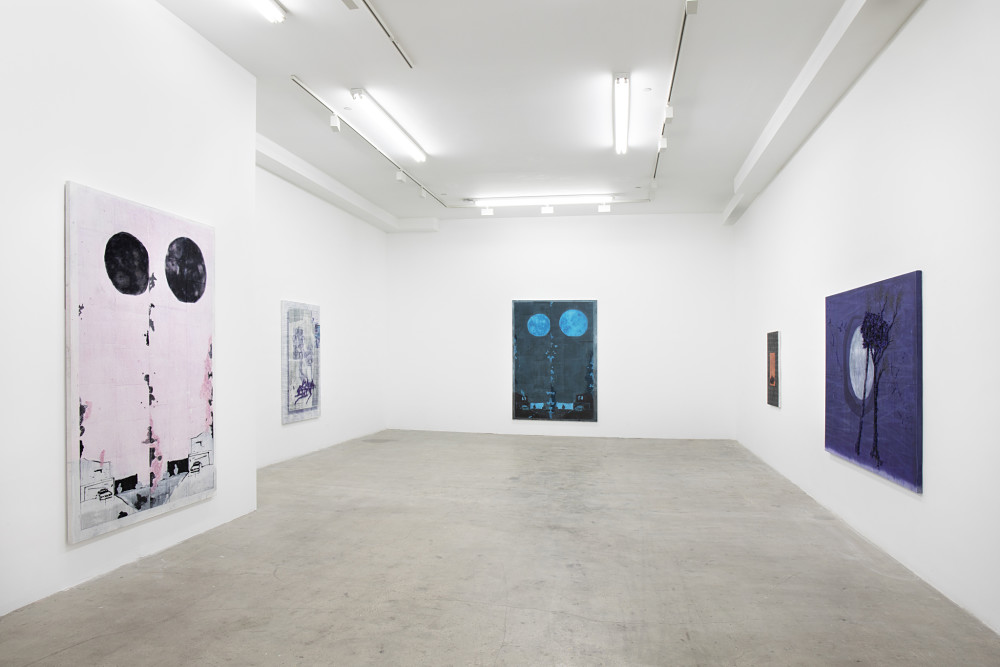 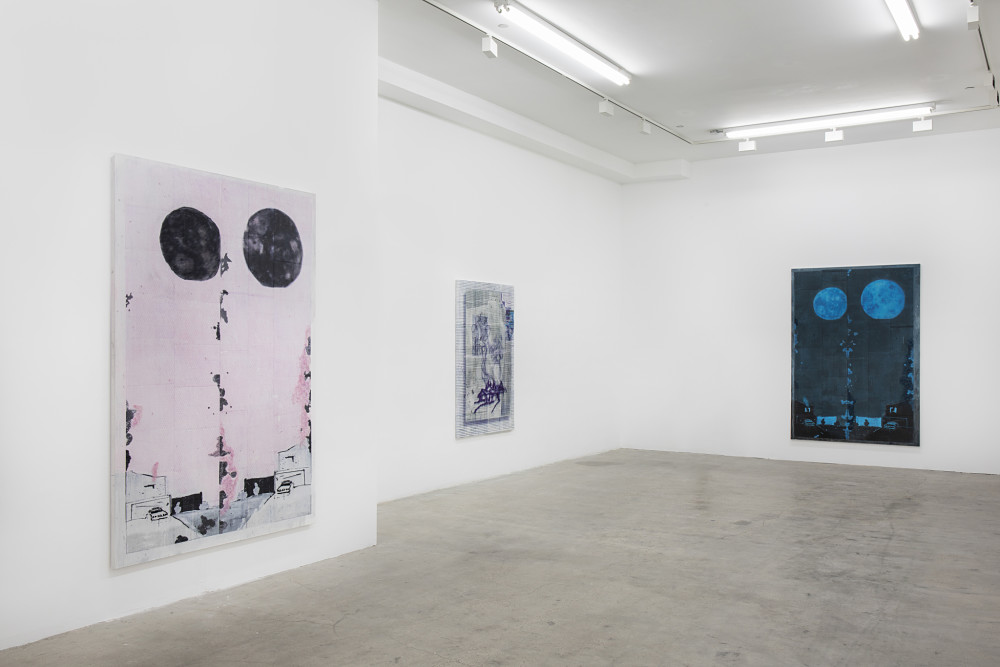 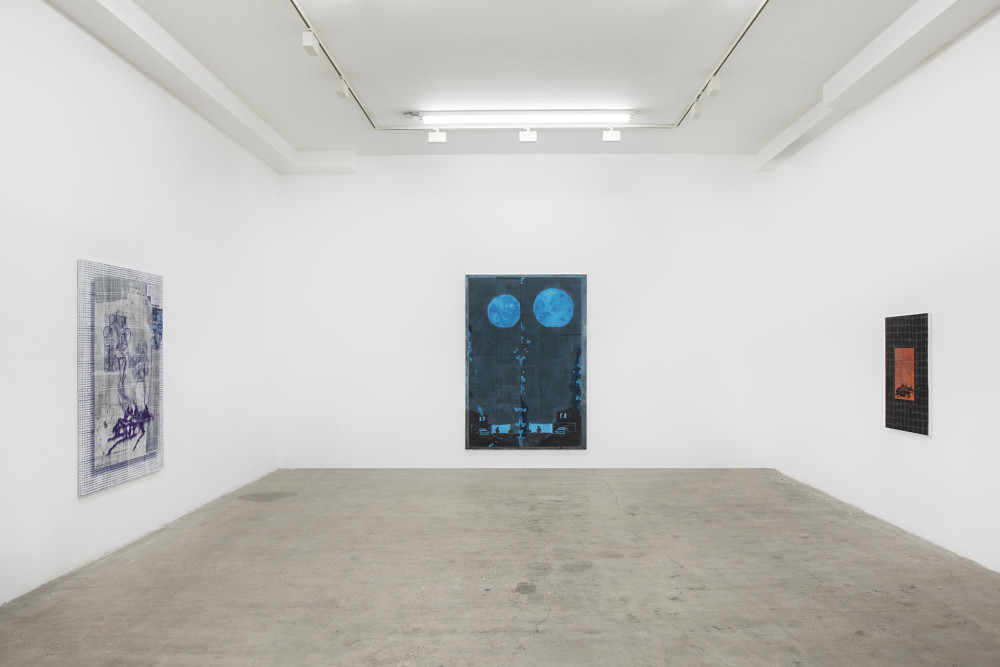 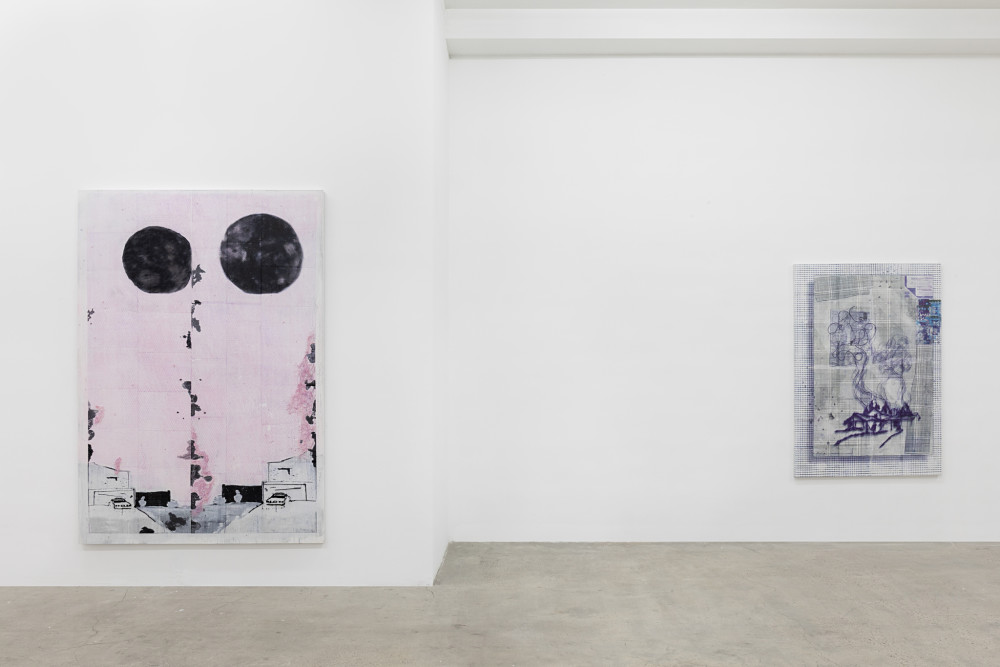 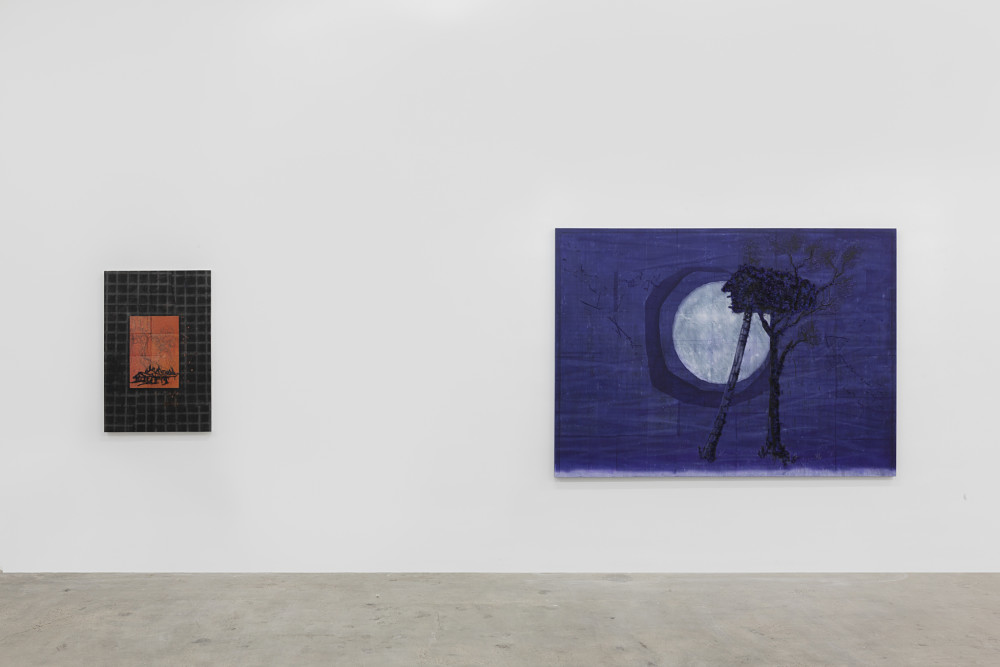 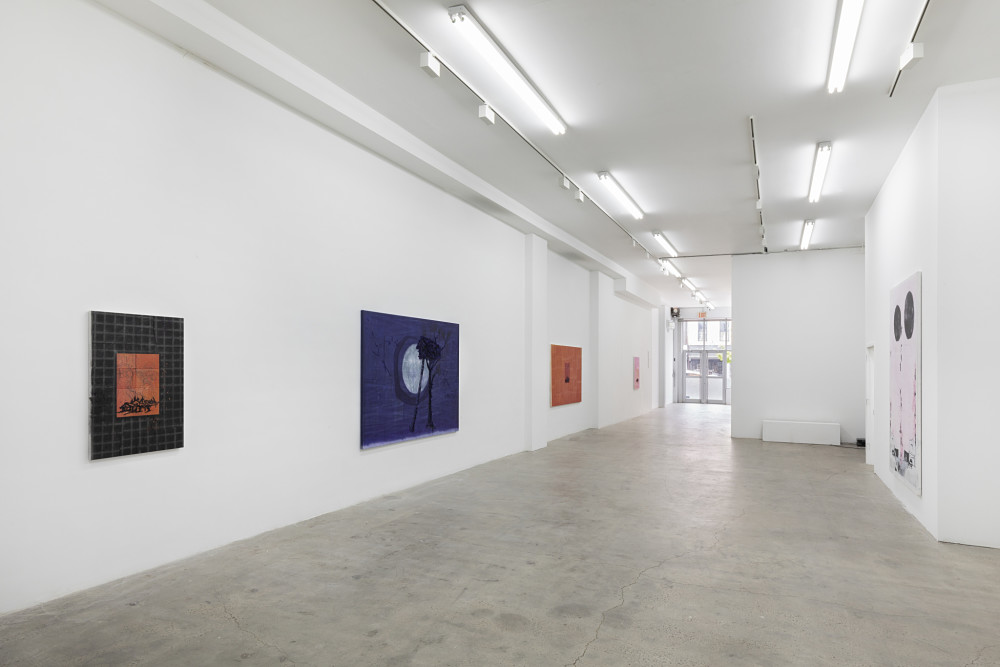 There are fields of blue and grey and orange. Glows of light that seem to linger and exhale. There are dense, pooled shadows. They create spliced, penumbral spaces. When an image enters the scene, the effect can be hesitantly theatrical, near to cinematic, sometimes phantasmatic, often perturbed, menacing or cute, but then menacingly cute. A provisional setting for a provisional story. A story catching its breath as it waits to be told. A page waiting to be turned.

Michael Raedecker’s new paintings remain – as the previous ones have been over more than two decades – complexly wrought performances that each simultaneously conjure up and interrupt an image. The work done by the paintings is a kind of dream work. Hence an image here is only partially the subject of its respective painting, which is as much about the desire for the image, or the flight from it, as it is about the ostensible content of the image.

A long-rehearsed shift in Raedecker’s paintings over recent years has tended to insinuate a duality of field and image, un- like his earlier works, which were more concerned to con- ceive images within spatially defined genres, like interiors of rooms, or forested landscapes. In Raedecker’s new work the elements that appear as nameable images – a tree house ripe for a child’s fantasy, a cheerfully blazing fire – feel less native to the fields of the paintings, and less securely or comfort- ably sited in them. It is this tension between image and field that drives the strangely anxious energy and nervy playful- ness of the new work. In these paintings, ‘image’ can be many things: a diagram coaxed into a semblance, a logo massaged into a spectre, a fantasy, a memory, a hope, an anticipation, a blueprint, a decoy, a divination, a lure and a trap, a basketful of wounds and desires. But also, importantly, a thing seen that precedes our catching sight of it. Something we already knew before we saw it. An item latent in a prior psychic repertoire.

From the VRchives: Michael Raedecker: parade @grimmgallery New York, presented from 3 May to 23 June 2019 Raedecker’s new paintings remain complexly wrought performances that each simultaneously conjure up and interrupt an image. In these paintings, ‘image’ can be many things but also, importantly, a thing seen that precedes our catching sight of it click the link in our bio to view the exhibition in VR #360 #360art #360photo #VR #VirtualReality #ArtPassport #MichaelRaedecker #GRIMM #GrimmGallery #NewYork #NYC #gallery #exhibition #art #painting #abstract #geometry #contemporaryart #modernart #seemoreart #GalleriesNow #lifestyle #ID15440