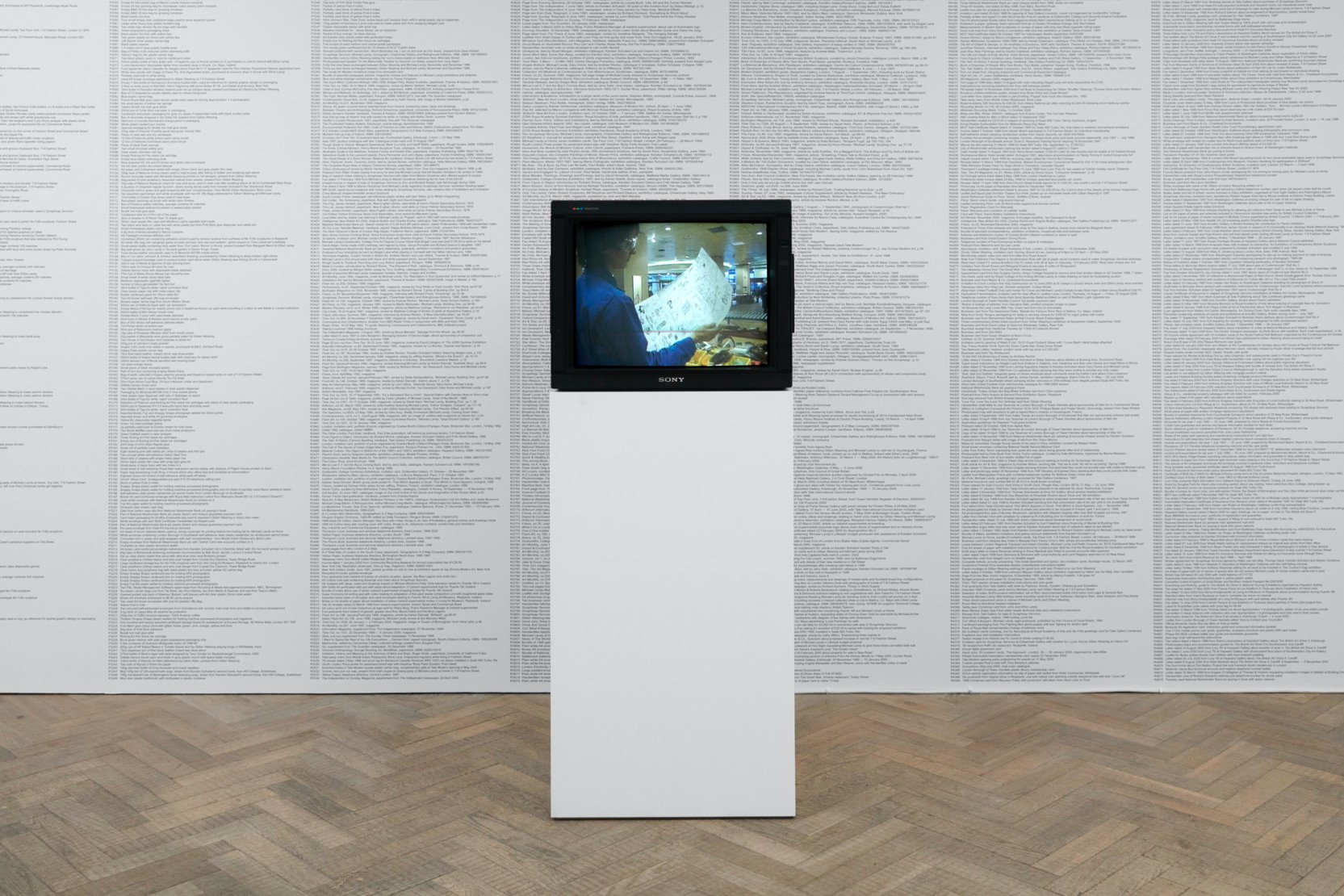 Break Down is sometimes referred to as a ‘lost’ artwork, as an event that took place in the past and can’t be remade, only remembered, as if the artwork is something separate from the things generated by its destruction.[1] And while it is true that Break Down existed for only two weeks, it is an artwork with a life both in its performance and in its aftermath. Break Down’s significance remains as an artwork that captured a national imagination, as complete media coverage in television, broadsheets and tabloids and personal responses from the public made clear at the time. The longevity of its impact is also demonstrated in its archive: its documentation, and the artworks and materials produced afterwards, along with the personal and collective memories of its audiences. Twenty years on, through a display of some of the materials in this archive, we look back at the performance in February 2001 and the work’s significant and timely legacy.

‘Break Down played on the idea of a psychological breakdown as well as physical break down. As a child I liked to take toys apart, that’s how I got to know how they worked in a way. Break Down is a grown up version of this.’ [2]

Taking objects apart to find out how they work is a logical and familiar physical response to understanding them. For scholars, the deliberate destruction of a beloved object as a response to its power can bring to mind Charles Baudelaire’s celebrated reference to the frustrated child who takes a toy apart and destroys it in the process of looking for, and failing to find their favourite toy’s ‘soul’, the thing that animates it and makes it powerful.[3] Baudelaire goes on to note that there is no ‘soul’, only a projection of self.

Dismantling objects in order to understand them is slightly different to the child’s quest for its toy’s soul. Curiosity about mechanical operations can actually lead to material knowledge, as opposed to a search for something immaterial which ends with nothing. From this perspective, taking a thing apart can be understood to increase the object’s value rather than diminishing or negating it. In Break Down, Michael Landy took apart his material life to forensically examine it.

Break Down was the result of four years of research and preparation, although its formal and conceptual roots can be seen in much earlier works. In the installations Market (1990) and Closing Down Sale (1992) Landy incorporated the furniture and atmosphere of consumer environments – the market stall and shopping trolleys – but he removed ‘desirable’ objects, undermining the cycle of consuming. The installation Scrapheap Services (1995), a fictitious cleaning company designed to dispose of ‘useless’ people in society, used the language of waste management systems to critique the application of economic values to human beings. In 1997, the sale of this work to Tate led Landy to question the value of his material possessions and newly felt financial security.

Drawings made focusing on the value of Landy’s material life first appeared in Michael Landy at Home (1999), an exhibition that introduced into the artist’s work his personal possessions and time-based performance. The exhibition took place at his home, where 17 drawings were displayed on walls made of custom-made Michael Landy-branded primary coloured milk crates while he was making the collage The Consuming Paradox (1999) over the course of the exhibition’s run. It was here that James Lingwood first proposed the idea of Break Down as a project with Artangel. Landy has described this exhibition as a conceptual and practical ‘launchpad’ for Break Down.

All of the components of Break Down were present in the exhibition Michael Landy at Home, 1998, with several drawings from it included in the current display. The exhibition presented the results of Landy’s research into material reclamation facilities (MRFs) and recycling more broadly, along with popular and academic writings on consumerism and ethical living. The artist was making the large-scale collage The Consuming Paradox on site. He brought together clippings of printed texts and images, handwritten notes and drawings as well as personal possessions and entire objects, such as pens made from recycled materials and magazines, books and videotapes including Material Recycling Handbook (‘acquired for free’), Consumerism – as a Way of Life, How Are We to Live? Ethics in an Age of Self-interest and Gustav Metzger: ‘damaged nature, auto-destructive art’. At the centre of the collage is a cut out drawing of key elements from a material reclamation facility: a conveyor belt, a raised platform, picking stations and sorters, along with bins for broken down materials. Conveyor belts and sorting stations also appear in the drawing The Subject of Consumption (1999). The two drawings Identification/Sorting/Separation (1998) and P.D.F. (Product, Disposal, Facility) (1998), explored this further, making the processes of the reclamation facility their main subject. Other drawings focused on Landy’s material possessions and their uses, with the words ‘LIFE’ and ‘style’ appearing in The Consuming Paradox, and in drawings such as Michael Landy’s Lifestyle (1997).

With these drawings in mind, it’s not surprising that Break Down was originally entitled Michael Landy’s Lifestyle, and that its installation eventually featured a unique system based on the elements of a materials reclamation facility. The blue neon Michael Landy’s Lifestyle (1998) reminds us of the project’s origins. Landy planned to take everything – everything in his life, his ‘lifestyle’ – apart and back to their original materials to demonstrate the resources accumulated by one person (over 37 years) and the fate of those materials in the larger ‘waste stream’ when recycling options are limited. In the early stages of the project, the presentation was going to be a stationary tableaux, like Scrapheap Services (1995), perhaps in a disused warehouse, with material objects and remains displayed on shelves.[4] In time, Landy sourced the elements needed to make the installation take the form of a material reclamation system, and the closing down of the flagship C&A on Oxford Street provided the perfect site and context for the work. In opposition to its context, Break Down was an ‘anti-consumerist island’ in Oxford Street, performing consumption in reverse, not making things to sell and buy, but taking things apart and back to their original material states. Alignment with Oxford Street shopping was also part of this reversal: Break Down took place within standard shop opening times, even incorporating the extended hours of Late Night Thursdays.

Critical to the project was a systematic approach to disposal: an audit, an inventory cataloguing every single possession and an order to the process of taking each object apart. Landy and his friend Clive Lissaman separated all 7227 items into groups, and identified them by a letter and number: A for Artworks, C for Clothing, E for Electrical, F for Furniture, K for Kitchen, L for Leisure, P for Perishables, R for Reading, S for Studio (the contents of Landy’s studio) and MV for Motor Vehicle (a cherry-red Saab 900 16S Turbo). The inventory served to level the value of items, with all things broken down regardless of sentimental or monetary worth. This included artworks by Tracey Emin, Angus Fairhurst, Anya Gallacio, Gary Hume, Abigail Lane, Paul Noble, Chris Ofili, Simon Patterson, Jean Tinguely and Gillian Wearing, Landy’s own artworks, a Muji jumper, his father’s sheepskin coat, a bedside lamp, two Chubb keys, Grace Jones’s Warm Leatherette vinyl LP, holiday photographs, cat toys, cat food, a jar of Horlicks, Herbert Read’s A Concise History of Modern Sculpture, business cards, library cards, legal letters, love letters, Landy’s birth certificate and passport, a receipt for hat and gloves from the C&A closing down sale, screwdrivers, wall plugs, a hacksaw, drawings, Break Down sketch, 2001 (ink on paper), the Saab. The inventory’s concise, careful language makes it a valuable document of social history capturing an individual artist’s material life in 2001.