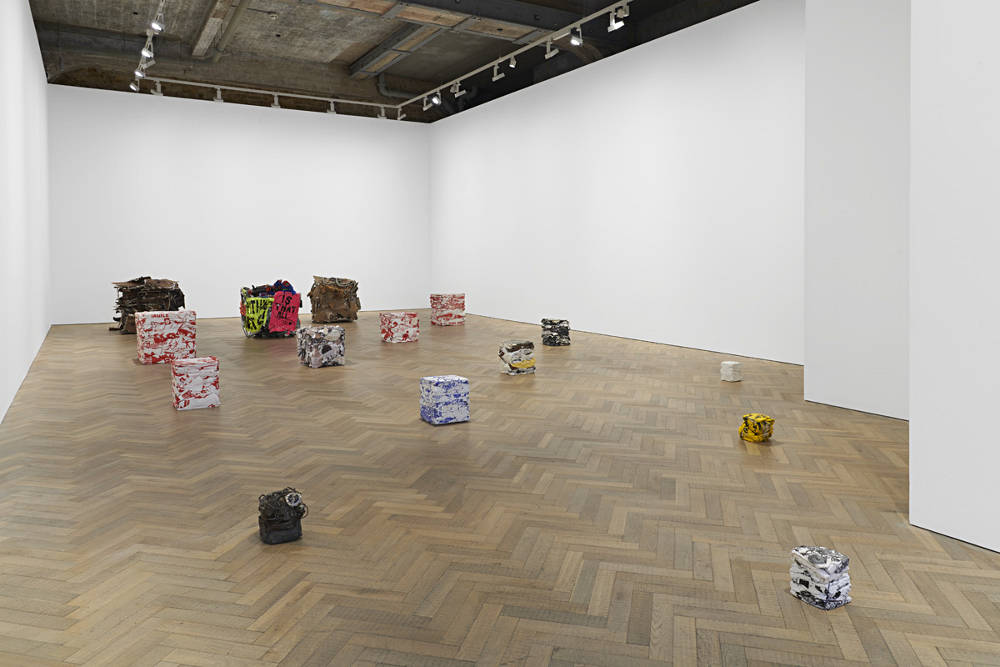 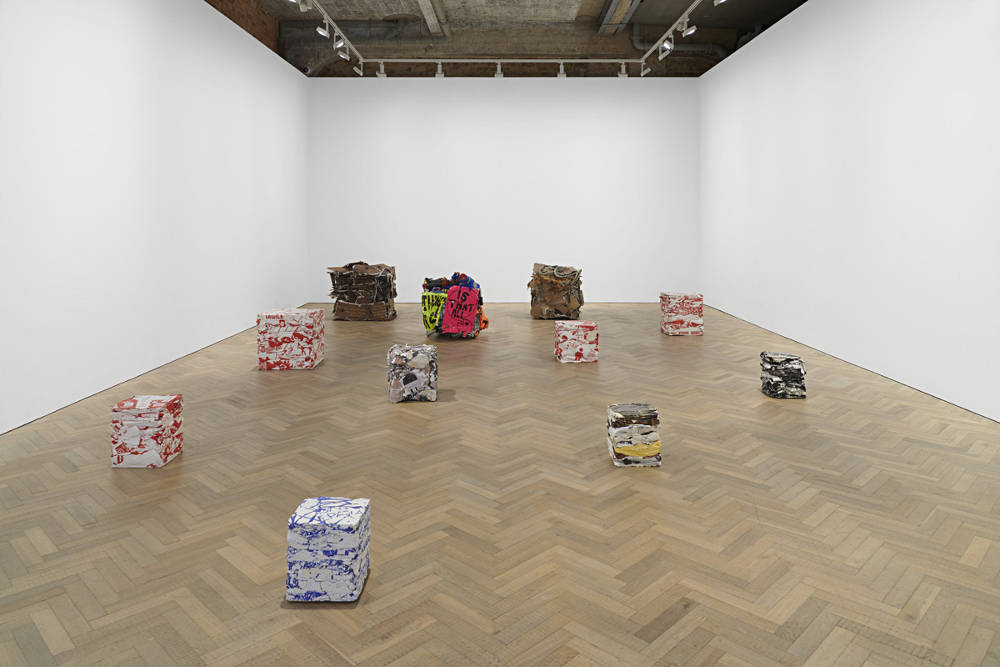 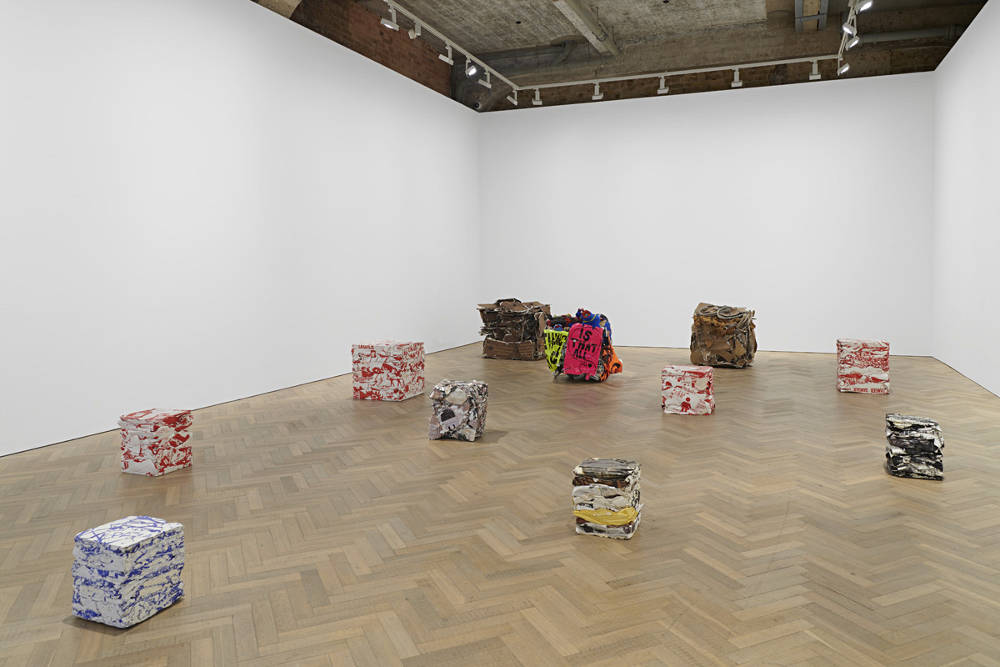 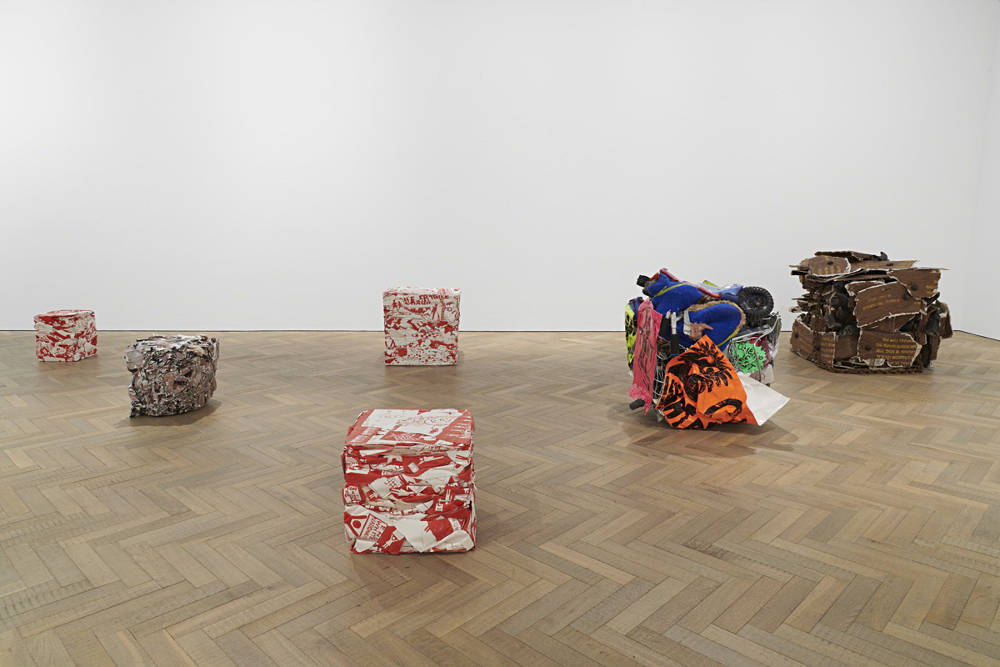 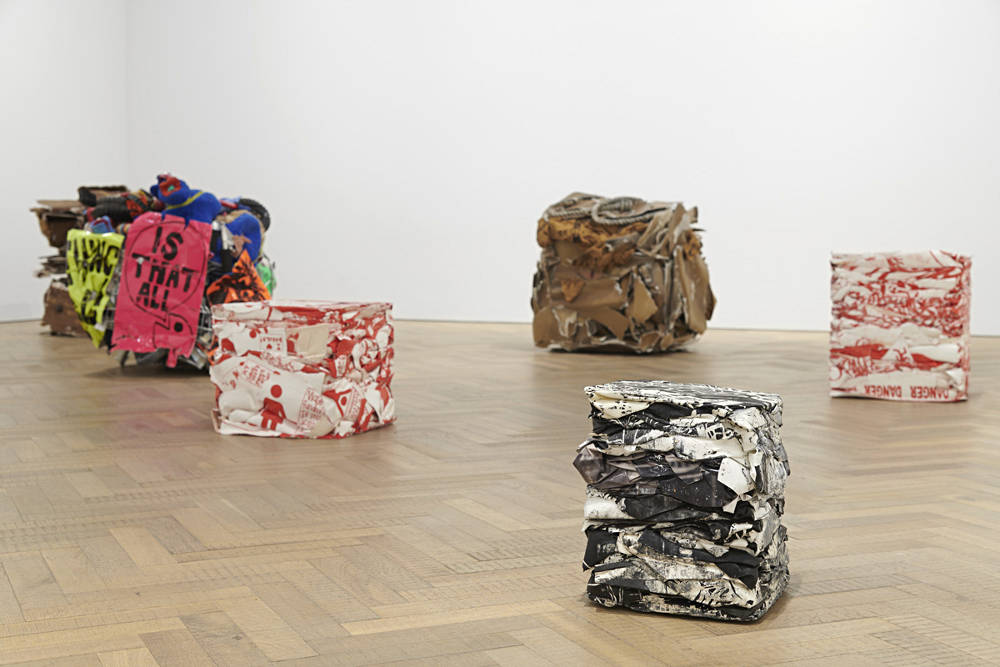 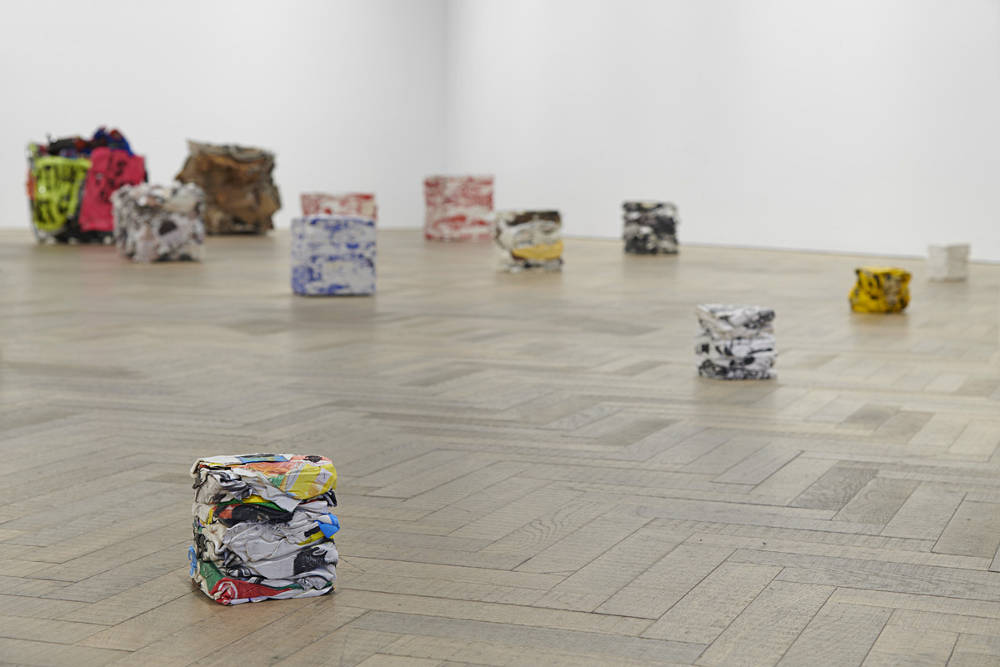 The mechanisms and aesthetics of waste disposal have been of fascination to Michael Landy since research on early projects Scrapheap Services (1995) and Break Down (2001). Throughout his career Landy’s interest in mechanical destruction has manifested in many forms – from the shredder, to the (dis)assembly line, to self-destructing kinetic works. In Scaled-Down, the artist’s new body of work, he turns to the methods of industrial waste compaction. The process of destruction becomes not one of obliteration, but of transmogrification and renewal, as sculptures and drawings are re-imagined and re-shaped in unsparing, compressed sculptural form.

Alongside large-scale installation works, Landy is perhaps best known as an accomplished draughtsman and print-maker, working rigorously and exhaustively in series. Sometimes these drawings and etchings are articulated to obsessive detail as in the meticulously rendered botanical series Nourishment. Often they are extensive in their number, as with his vast series of 90 intimate portraits of his family and friends; or immense in their volume, as in Breaking News, which saw the artist create immersive installations of labour intensive oil bar drawings using the codified language of signs and headlines. In Scaled-Down, Landy finds a way to set to ‘zero’ recent years of his own compulsive production.

Using methods of industrial waste compaction, devised in the commercial sphere for their efficiency of form, Landy has worked systematically to make new works in the form of densely packed cubes, made from his own past artworks. Obsessively ordered in his process-based approach, Landy devised a rigorous set of rules to follow, compacting groups of works by series to a set of defined parameters. Series ranging from 2004 to the present – including H.2.N.Y, Saints Alive, Breaking News, In Your Face – are compressed into regular forms in a systematic process. Cubes take on their own texture, defined by the materials of their constituent works. Compression in some result in layered stratum of material like rock sedimentation through which the histories of past exhibitions and labour can be read. Taken together as a group, the cubes embody a condensed archaeology of Landy’s recent artistic history; a compact survey in miniature.

The sparse formalism of the cubes echoes Landy’s early immersive installation Market (1990) where stalls, stripped of goods, made sculpturally minimalist forms of the urban commercial landscape. Followed by Closing Down Sale (1992) and Scrapheap Services (1995) these early installations addressed the blunt force effects of the market as they had manifested in Thatcher’s Britain.

Destruction as a creative process perhaps reached its zenith as a leitmotif in Landy’s practice in Break Down (2001), conceived to mimic the impersonal processes of factory production to pose questions of how we define ourselves by what we consume and what we own. Over two years Landy meticulously inventoried and measured every one of his 7,227 possessions with a detailed cataloguing system. Then, in a former C&A department store on Oxford Street, with a production line of 12 assistants, a 100-meter conveyor belt and a rigorous set of procedural guidelines, he began to systematically destroy

every single item. Complex objects were dismantled, and every piece was sorted then shredded or granulated. To the dismay of some onlookers, Landy’s own artworks and those of his contemporaries did not escape destruction.

Nearly a decade later, Art Bin (South London Gallery, 2010, subsequently presented at the 2014 Yokohama Triennale) saw Landy build a huge receptacle for fellow artists and members of the public to dispose of artworks – mainly their own – which they considered failures. The enormous perspex cube became a giant bin, sculptural and monumental, and, as in Break Down, the contents were subsequently sent to landfill.

Break Down and Art Bin called in to question our ideas of value – artistic, commercial, and personal. Scaled-Down too poses questions about how we apportion value to art, who has the right to do so, and how does value change and how does it accumulate. With their language of globalised industrialisation, these works remind us that the art world is a commercial enterprise and teases our ideas of how we define value within that system.

As with Closing Down Sale and Market, one cannot help but read the cubes of Scaled-Down within the economic context of their making: a globalised art-world of commodification, perhaps over-production, where hungry art buyers consume at fairs, efficiently and at speed. However, Landy is much less interested in this possible implicit critique of the new market we find ourselves in, or in any possible environmental reading, than in the works’ own materiality and sculptural qualities: their form, texture and character, indeed even their personalities.

Michael Landy (born 1963, London, UK) lives and works in London. He studied at Goldsmiths College where he exhibited in the now historic Freeze exhibition in London’s Docklands in 1988. Landy’s work was the subject of the major survey exhibition Out of Order at Museum Tinguely, Basel in 2016 and his work has been exhibited internationally in venues including Art Gallery of New South Wales, Sydney (2015), Antiguo Colegio de San Ildefonso, Mexico City (2014); National Gallery, London (2013); Whitworth Art Gallery, Manchester (2013), National Portrait Gallery, London (2011), Tate Liverpool (2009); Tate Britain, London (2004) and has made major public projects with Artangel, London (2001) and Kaldor Public Art Projects, Sydney (2011). In 2017, in collaboration with NEON, Greece and the public of Athens, Landy staged the large-scale exhibition Breaking News- Athens at the disued Diplarios School and building over a four month period. It was followed later that year by DEMONSTRATION, the Fleck Celestory commission at Powerplant, Tornoto, with an installation of drawings built with content submissions from the Canadian public.

The interactive installation Open for Business, Landy’s ‘Brexit kiosk’, is currently on view at the Riga Biennial, Latvia through 29 October,2018.

Landy was elected as a Royal Academician in May 2008. His works are held in public institutions internationally, including the Tate Collection, London; the Arts Council, England; the Walker Art Center, Minneapolis; the Museum of Modern Art, New York; and the Centre Pompidou, Paris.