Barakat Contemporary presents Garden of Delete, the first exhibition of the British sculptor Michael Dean (b. 1977, UK) in Korea. 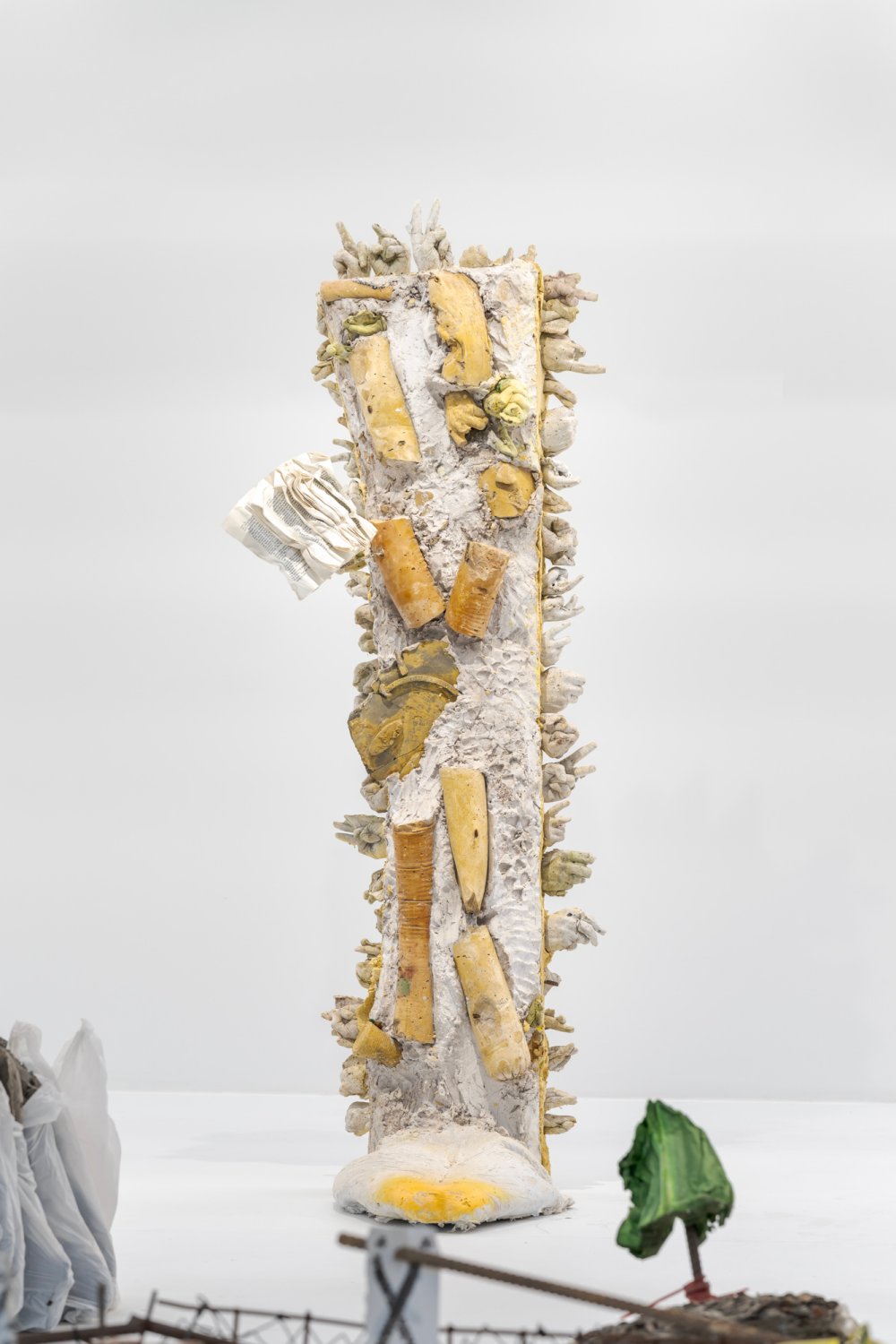 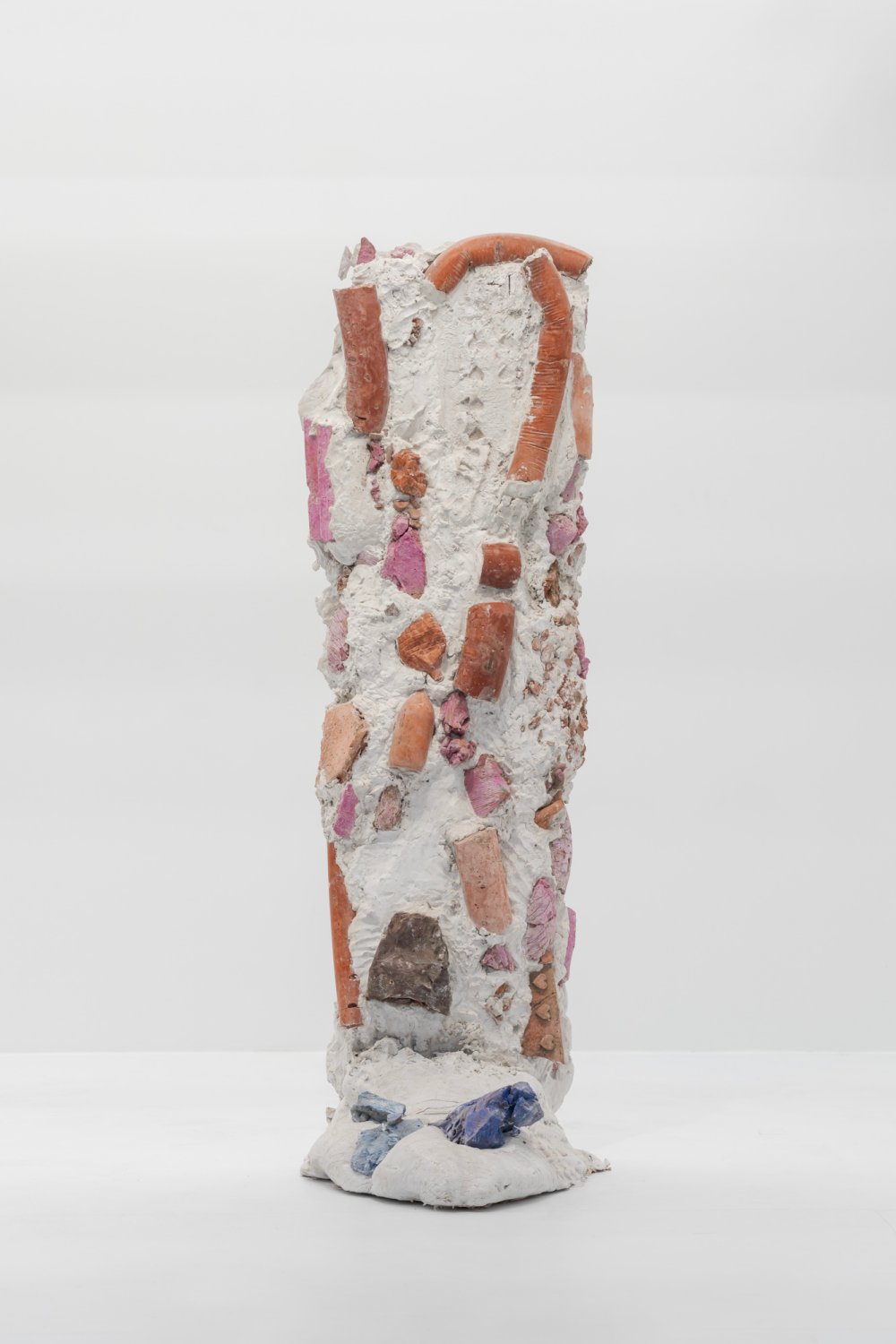 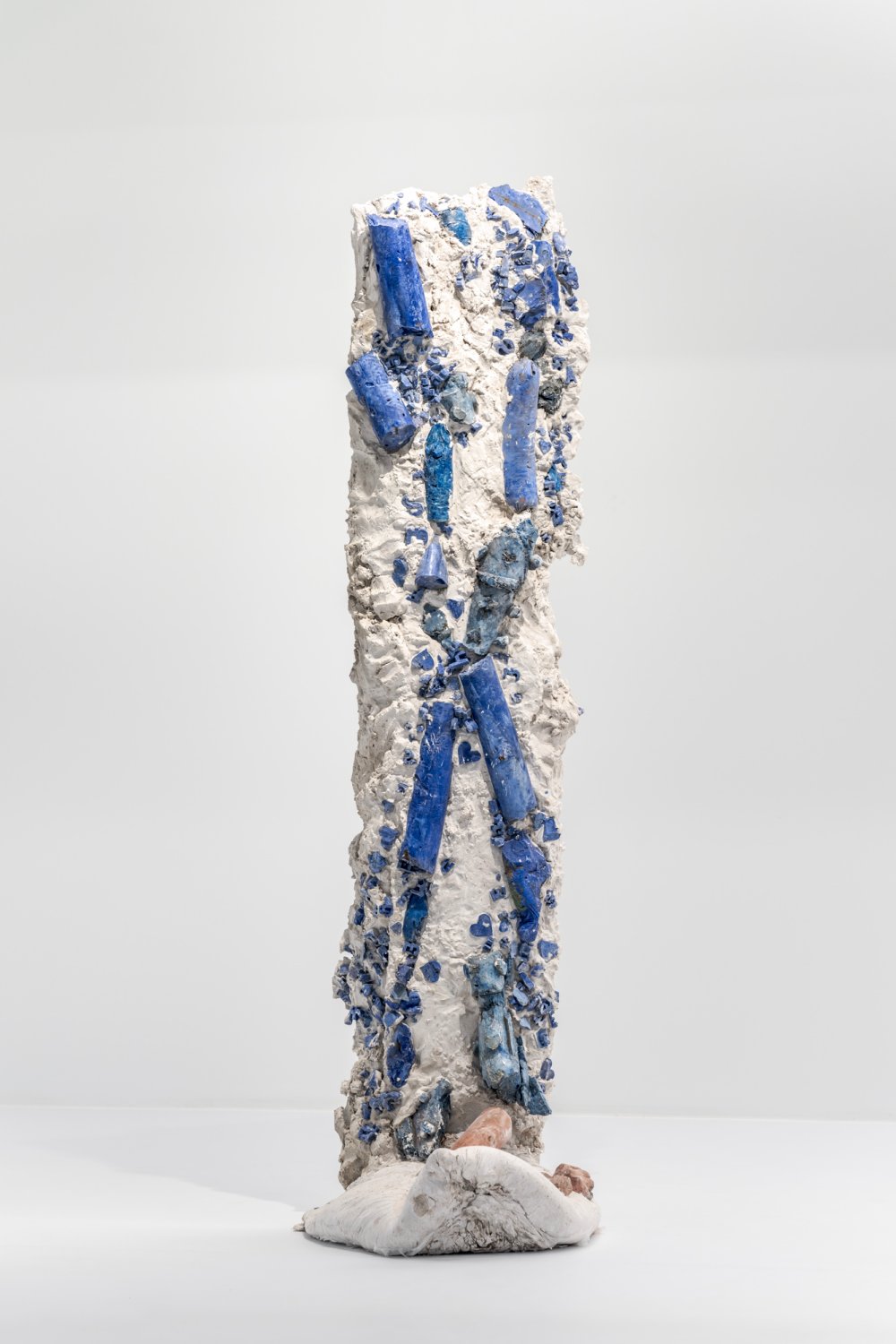 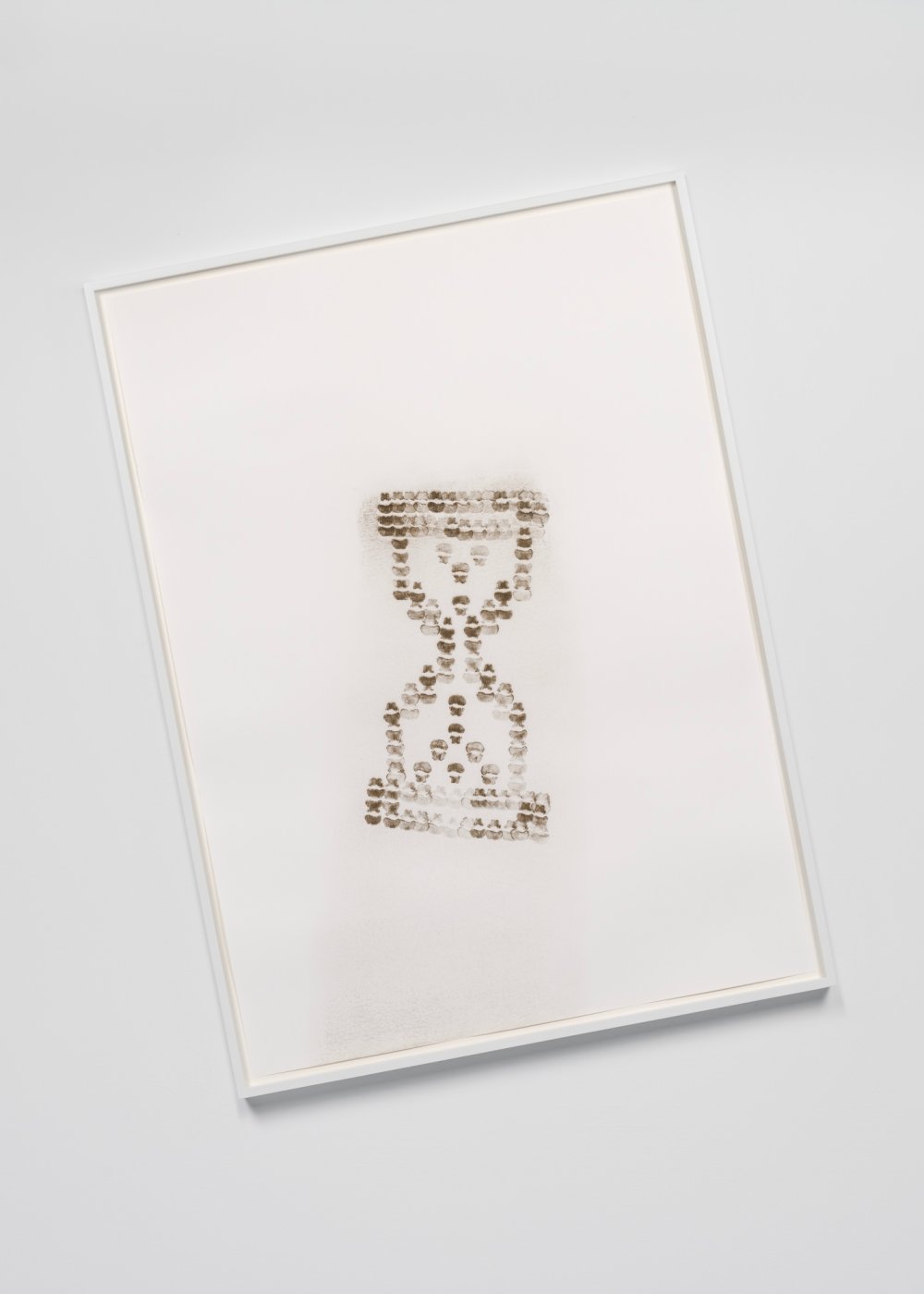 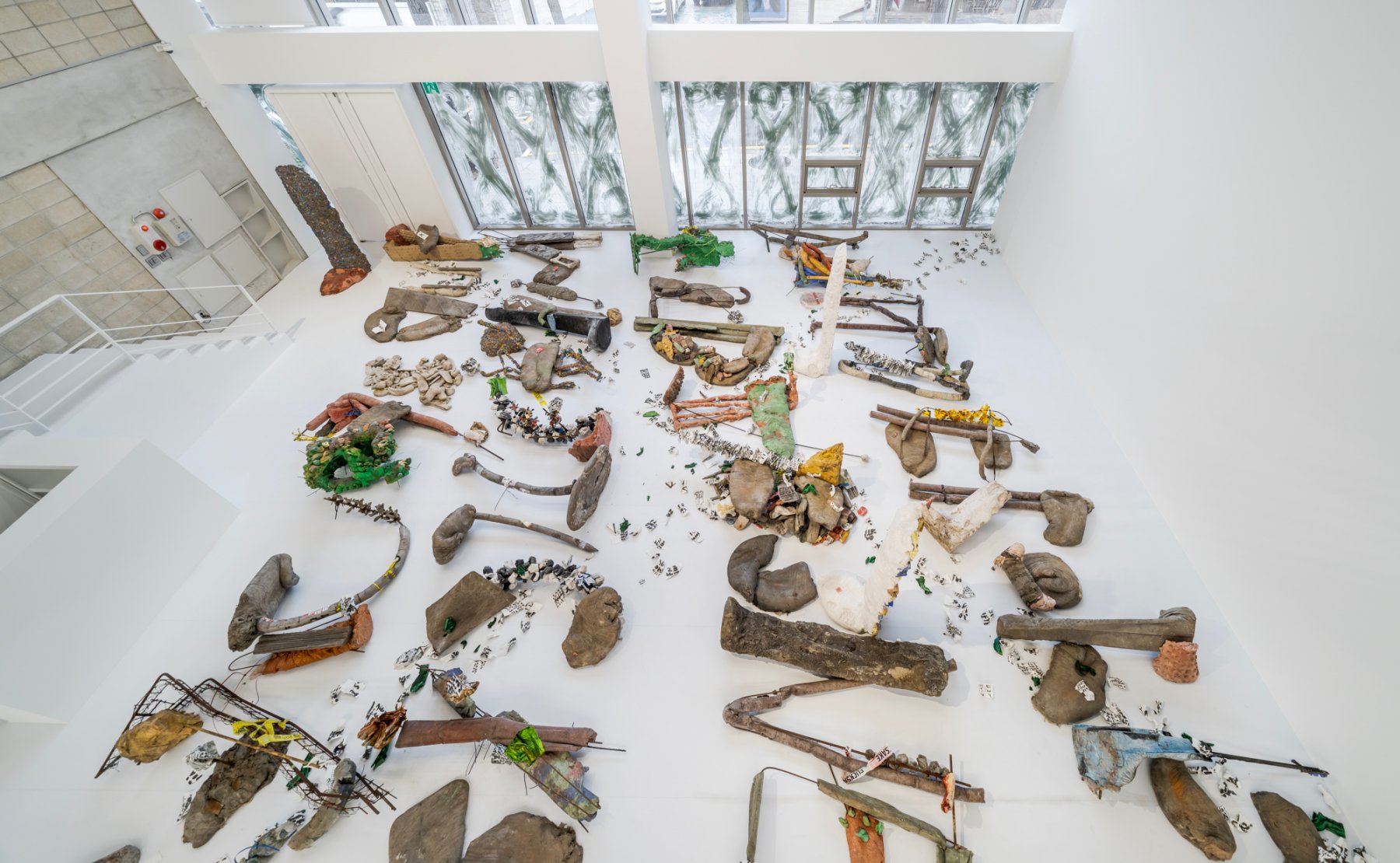 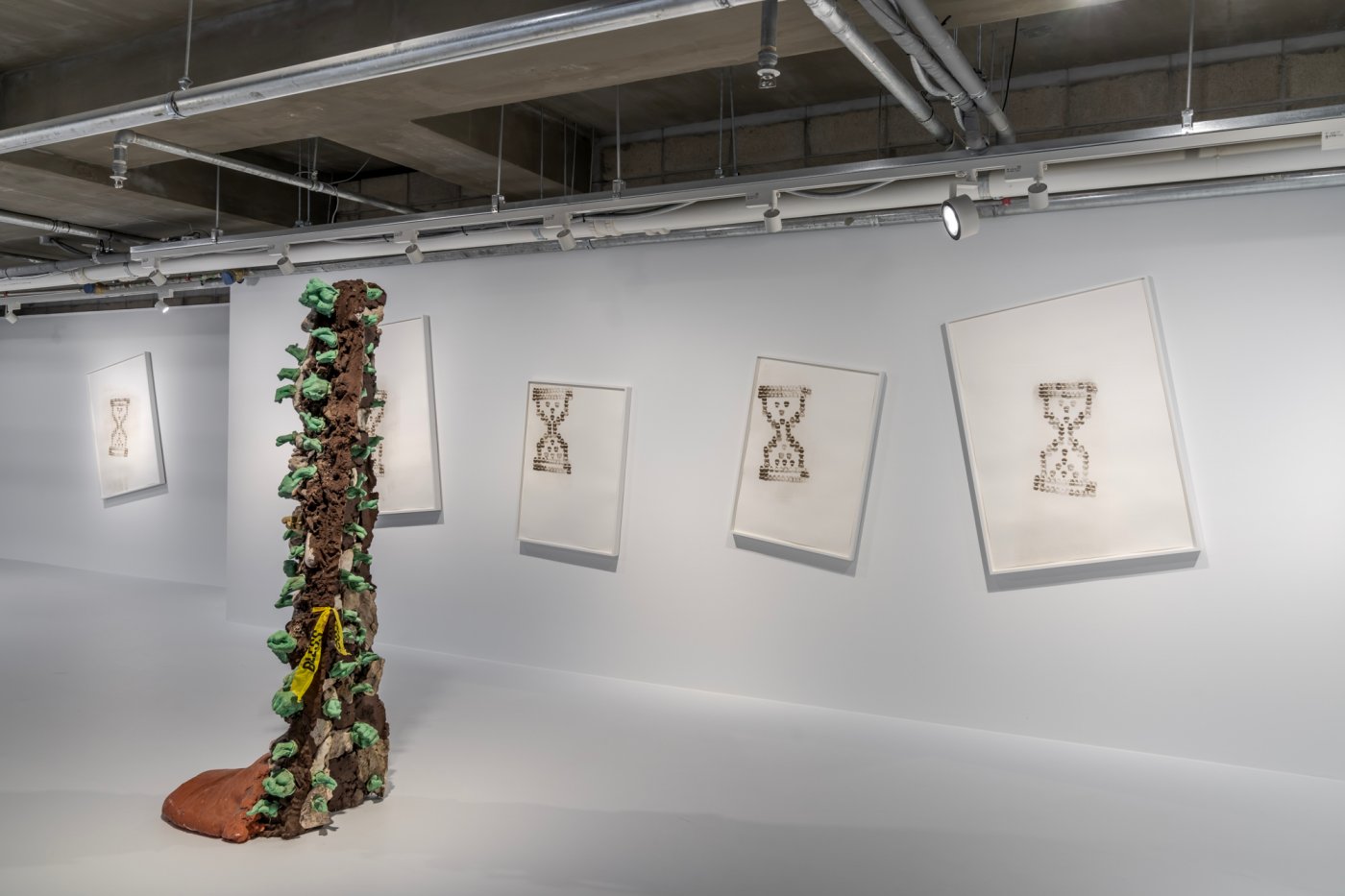 All around, we see cut and broken concrete blocks, the rubble of a building with its ragged, rusty steel skeleton exposed, corroded human forms resembling mummies, fragments of animal bodies, and pieces of what look like ancient script. Propped up against each other or standing askew, the sculptures with their seemingly lazy movements are somehow tragic, like the fate of human beings faced with the storms of nature. With its sculptures rising high over flat, even ground, this is a place where the entropy of destruction and annihilation reigns: Michael Dean’s Garden of Delete.

Garden of Delete started with the garden at Dean’s studio in the English town of Ilford. Seeing how the garden’s concrete sculptures changed with the seasons, the artist began composing texts about the organic relationship between artwork and nature. He described the changing face of the sculptures in terms of the “delete” key on a computer keyboard, using it to refer not to the complete annihilation of the work, but to a state in which the sculpture pauses momentarily within the flow of time. It is a worldview presented through Dean’s body of work, one that sees “entropy as a long destroy” in which all of the world’s matter and energy proceeds from order to disorder. Just as a dying plant produces seeds that sprout in its place when spring approaches, his sculptures drift within a different state of energy in nature, returning as seeds for some new flowering.

Sculpture, the main medium for Dean’s work, is produced as a mixture of pigments and materials often encountered around us, such as cement, sand, and water.

Humbly accepting the marks of time as they react to nature and their surroundings, concrete materials have inherited a legacy of weather and erosion from natural materials such as rocks, rubble, and earth. Assembled here is the debris cast off by human beings: the modernised concrete structures of the contemporary era, sidewalk blocks from along the road, advertising leaflets posted on telephone poles, wads of chewed gum. Dean describes concrete as a modern “palimpsest,” with its innumerable layers of time and language. Garden of Delete is a source of inspiration that evokes all the different emotions and thoughts the artist experiences, within which the artwork constantly iterates a process of editing and (through corrosion and weathering) deletion.

Language has always been a central element in Dean’s work, as he has experimented with the multisensory possibilities inherent to language as a medium of communication to express his thoughts and feelings about the world. Starting with different forms of writing – theatrical script, poetry, typography – his extensive body of work translates them into formats such as recitation, performance, theatre, sound, body prints, and sculpture. With his ongoing explorations of ways to introduce a physical aspect to the written character, Dean proposed an approach to this latest exhibition in which the gallery space is transformed into a blank page. Standing in the white space, his sculptures exude a powerful concrete materiality, revealing their vivid presence before us like letters on the page that have been imbued with physical substance. The empty spaces among the sculptures play a similar role to the spaces between lines or the intermission of a play, ensuring that the meaning of the artwork is maintained in an endlessly differentiated and open state. On the whole, the individual sculptures stand as isolated geometric forms; trapped in the concrete, they seem to reach a hand out to the outside – casts of the artist’s fingers or first – in a plea for help. A concrete mass with its tongue cut out at the root holds up the base of a growth or sprouting sculpture, seemingly alluding to the language that sustains the structure of this world. Scrawled as if reflecting abstract traces of the artist’s body, the message “delete XxX”, words that give the title to the exhibition, appears over the surface of the sculpture’s column. The faint traces of a carved “X” can be seen, as though revealing the hidden secrets of the sculpture, which is studded with finely broken concrete fragments like pebbles buried in the earth. Indecipherable words appear repeatedly in Dean’s book, which attaches to a sculpture where cast hands densely protrude from the side, performing gestures that signify good fortune, struggle, peace, and solidarity. The sculptures in general exhibit a pronounced porosity, grain, and marks of corrosion and weathering, with a heightened contrast between the thick, weighty texture and the powerful colours. Produced at a different place and time, Dean’s installations and sculptures once existed elsewhere, yet they are all so aged and worn as to render that temporal difference meaningless. In most cases, the front and rear surfaces of the sculptures present a different canvas composition and formative elements, asking to be viewed in round in order to perceive them. The second floor of the gallery, which represents the final course of the exhibition, features works from the “kiss prints” series, for which the artist has produced hourglass shapes with fumbling grey pixel kisses over a paper surface. To create these works, the artist applied olive oil and lipstick to his own lips and applied the marks himself, after which he dusted raw cement over top to fix the smooches in place. The deleted presences and the moments of the artistic process are held fast as Dean’s kiss drawings capture the fleeting moments of a sensual kiss, together with the annihilation of time represented by the hourglass.

Michael Dean (b. 1977)
Michael Dean, born in Newcastle-upon-Tyne, England, has studied at the Goldsmiths University of London and has since gained international stature as one of the four finalists of the 2016 Turner Prize. He participated in the 2017 Skulpter Projekte Münster, a world-renowned art event, and was nominated for the 2018 Hepworth Prize. Dean’s major solo and group exhibitions were held at White Chapel Gallery, Henry Moore Institute, South London Gallery, Serpentine Gallery, BALTIC Centre for Contemporary Art, Hayward Gallery in England, Porticus in Germany, Nasher Sculpture Center in the United States, and Palais de Tokyo in France. Dean’s works are in several prominent institutional collections, including David Roberts Art Foundation, Tate, Henry Moore Foundation, and Walker Art Center.