To book an appointment to view the exhibition, please click here.

James Cohan presents an exhibition of new paintings by Mernet Larsen. This is Larsen’s third solo exhibition with the gallery. 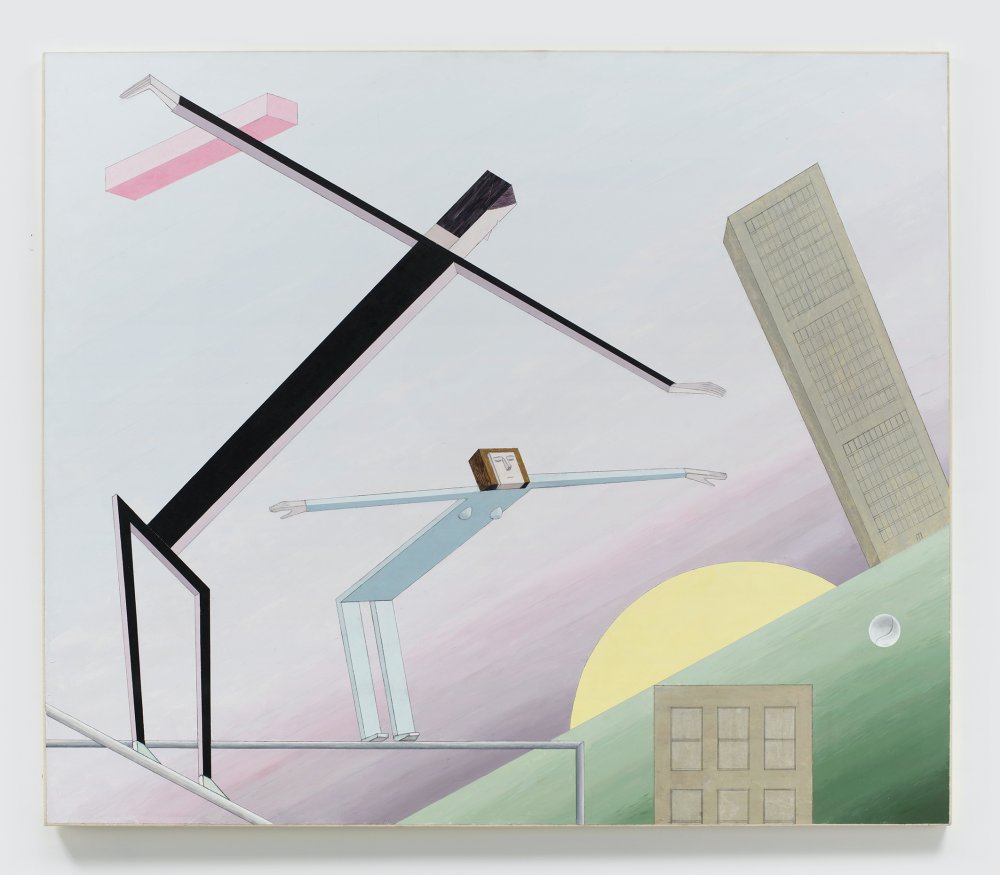 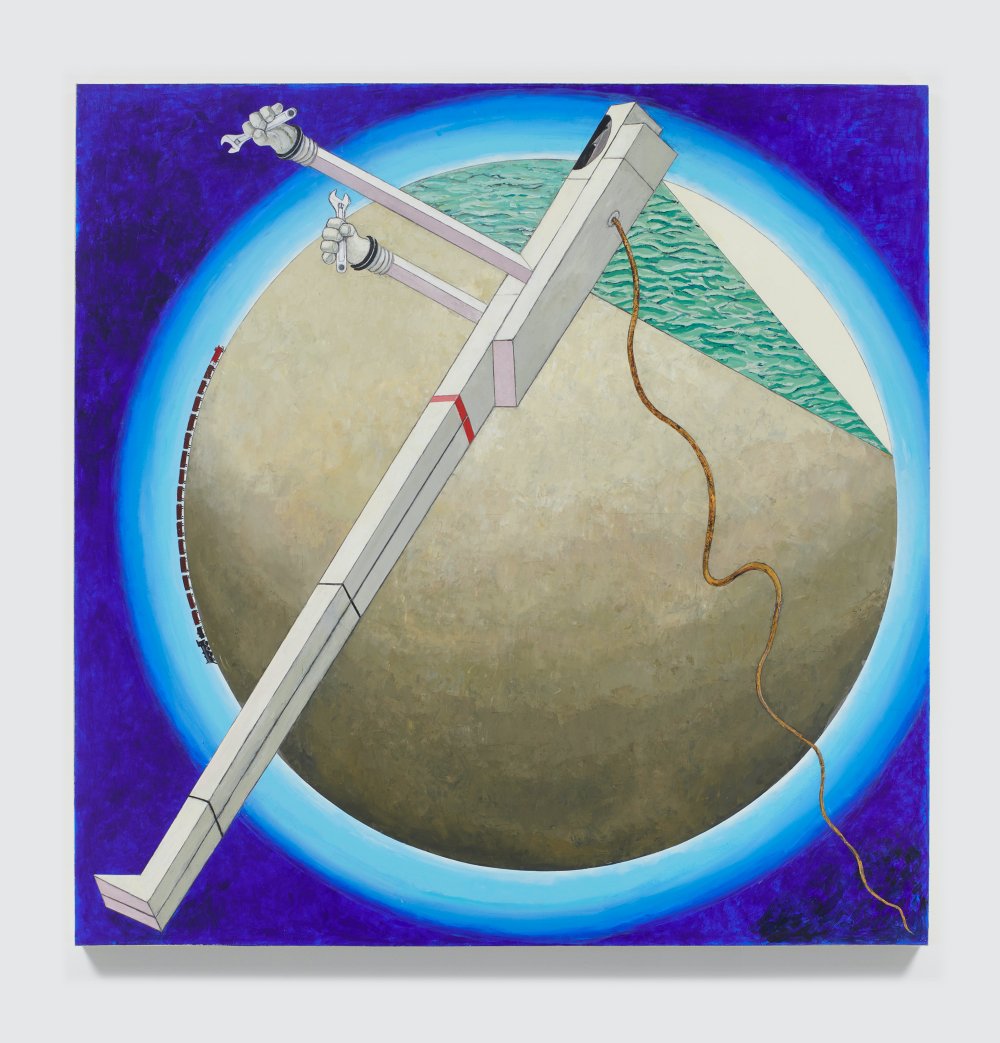 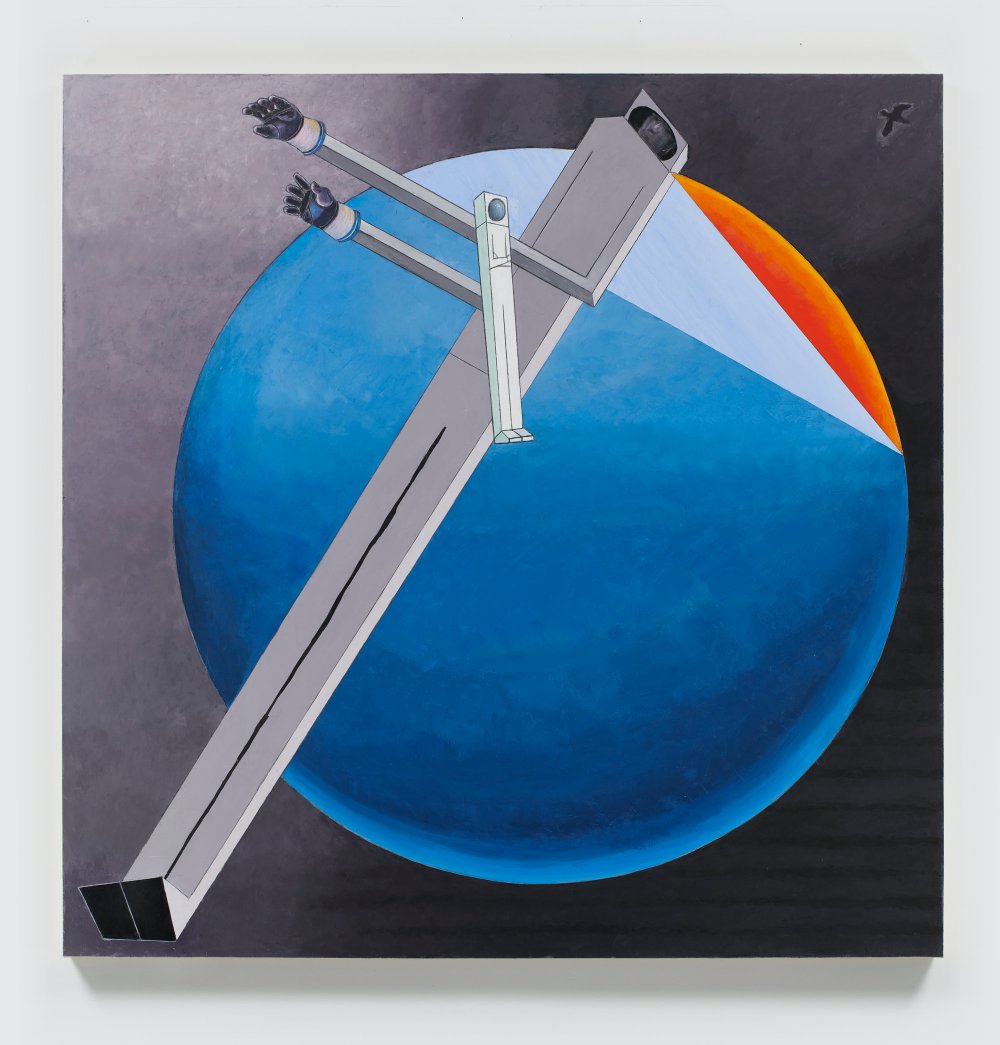 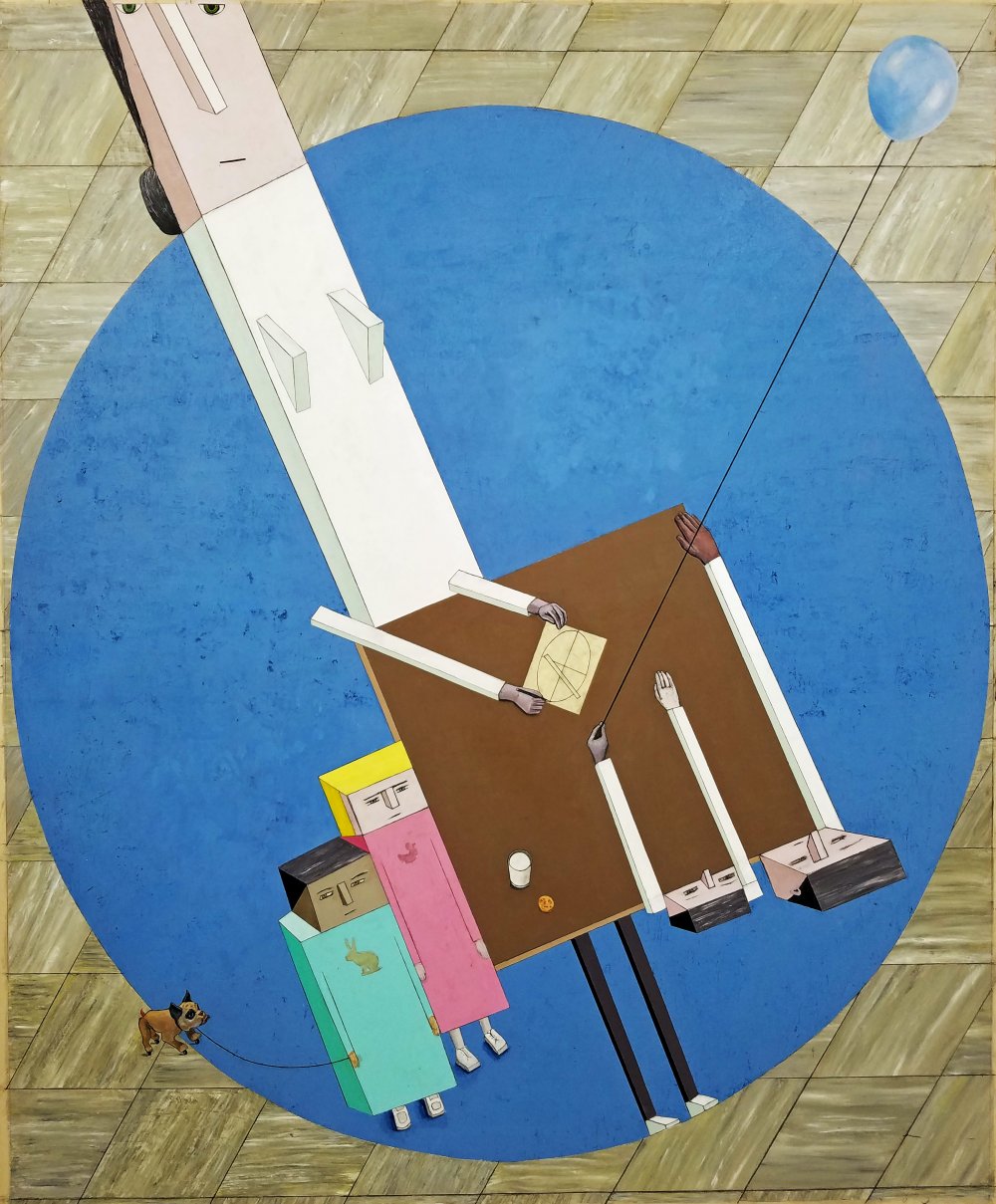 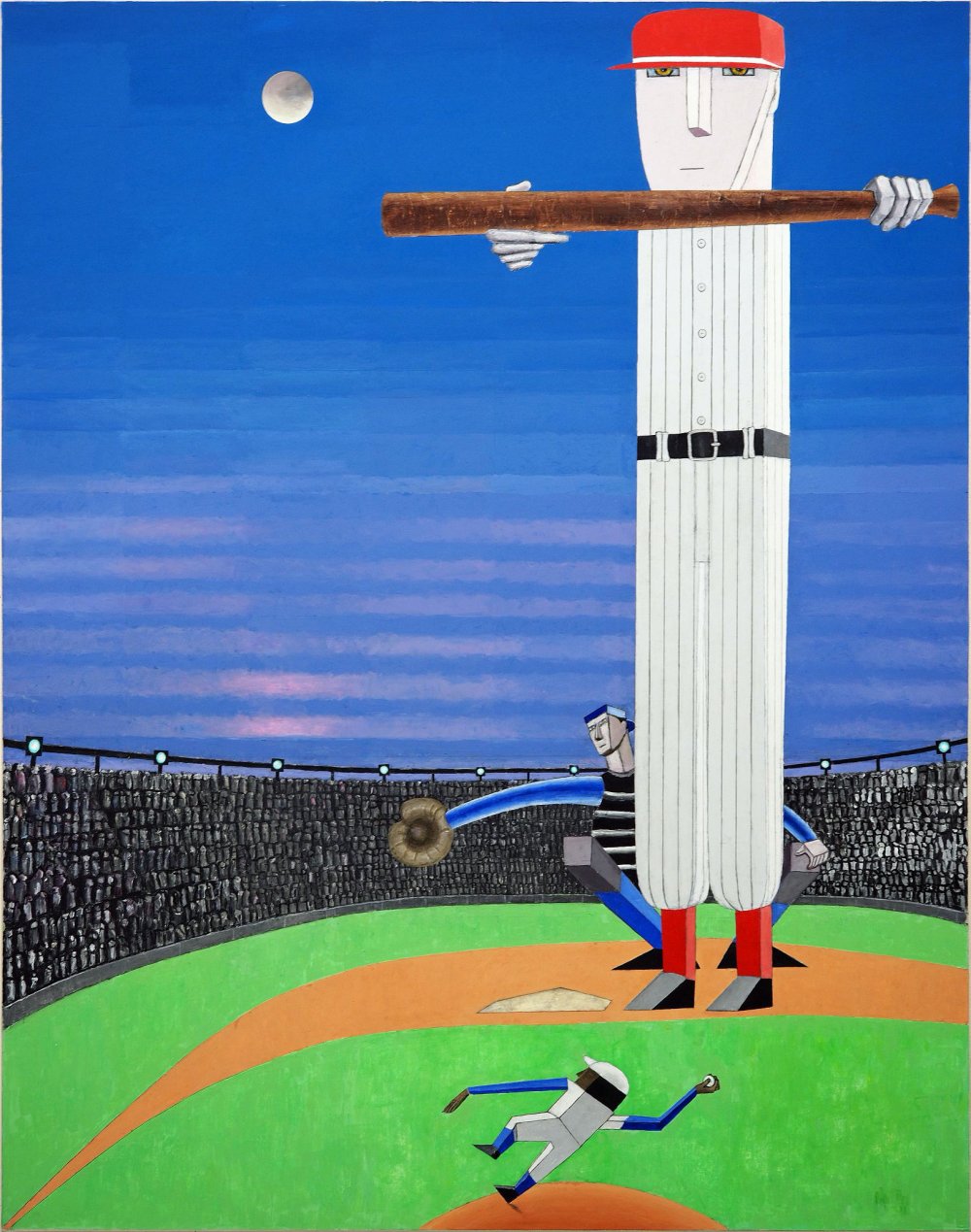 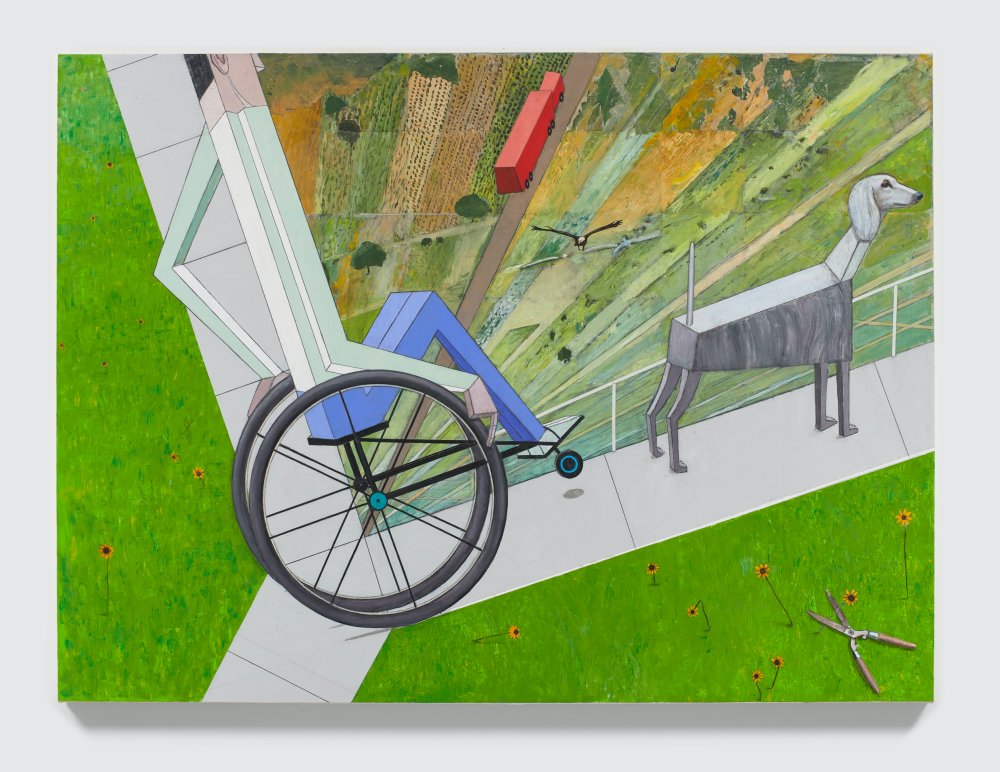 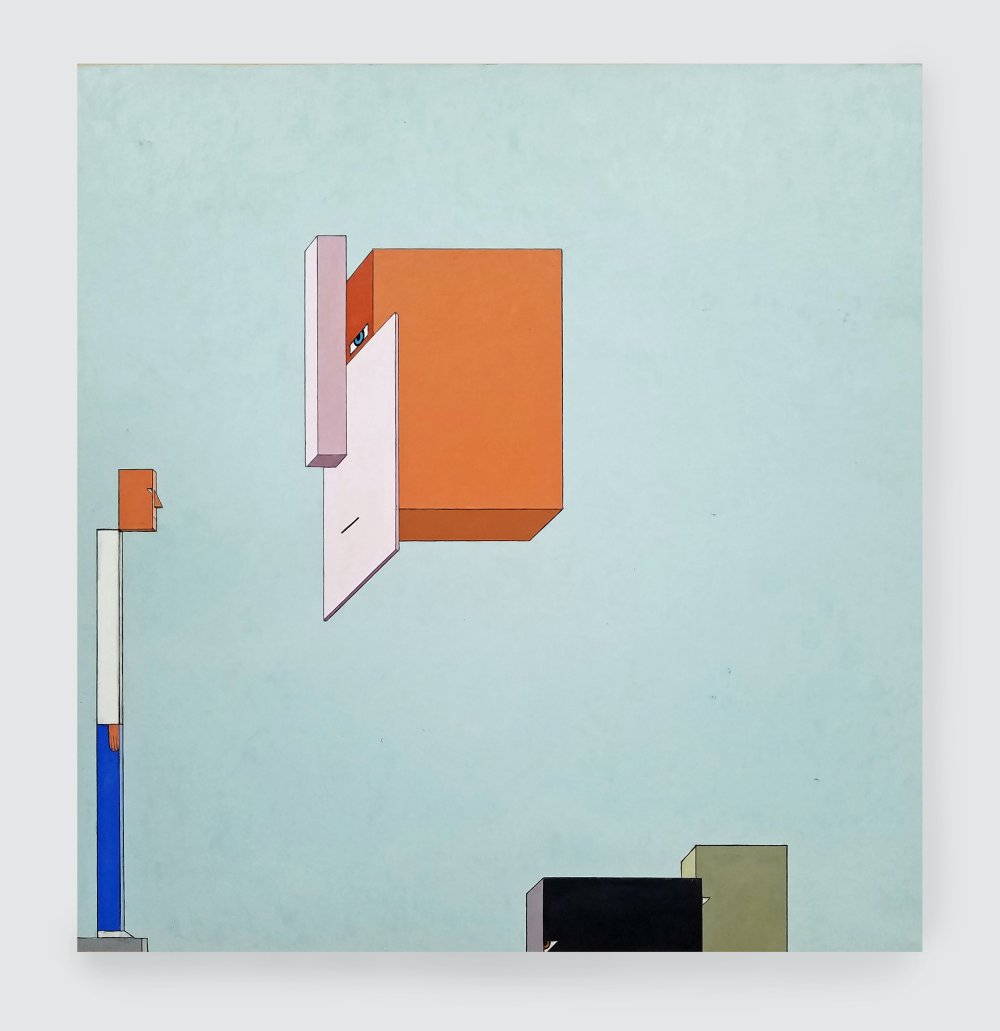 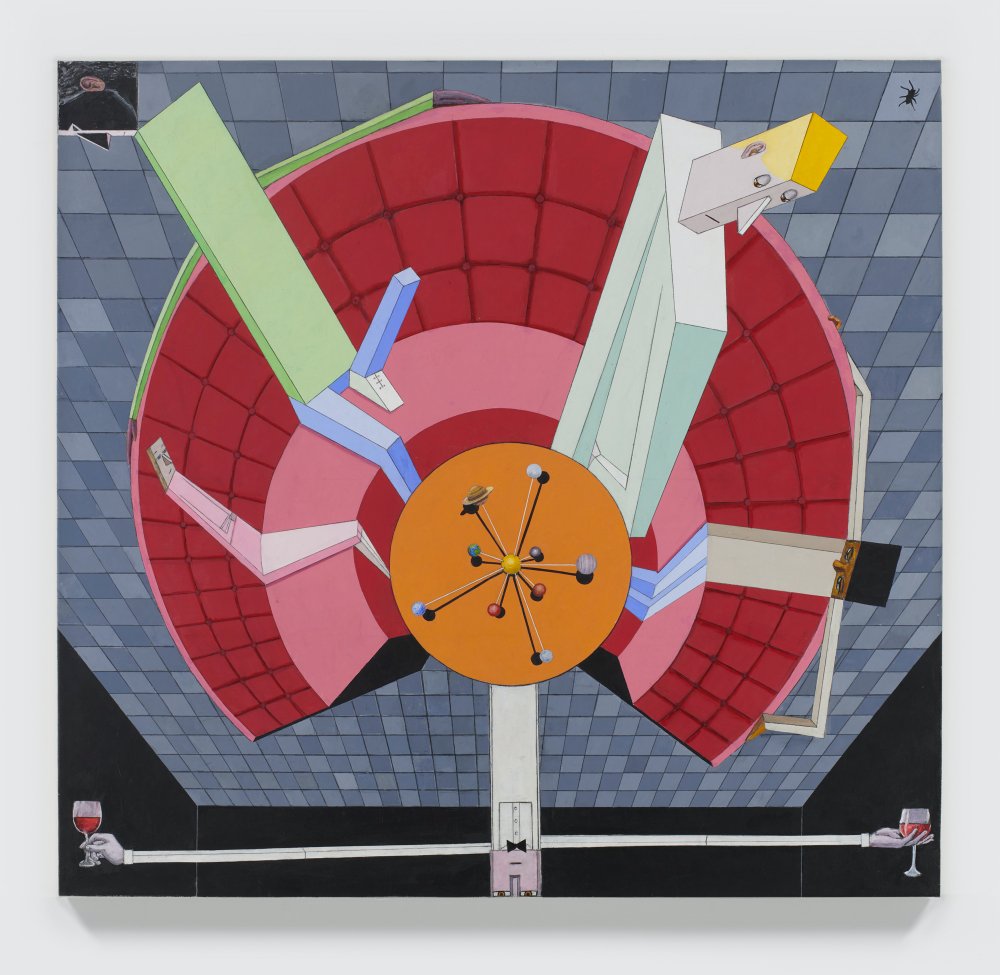 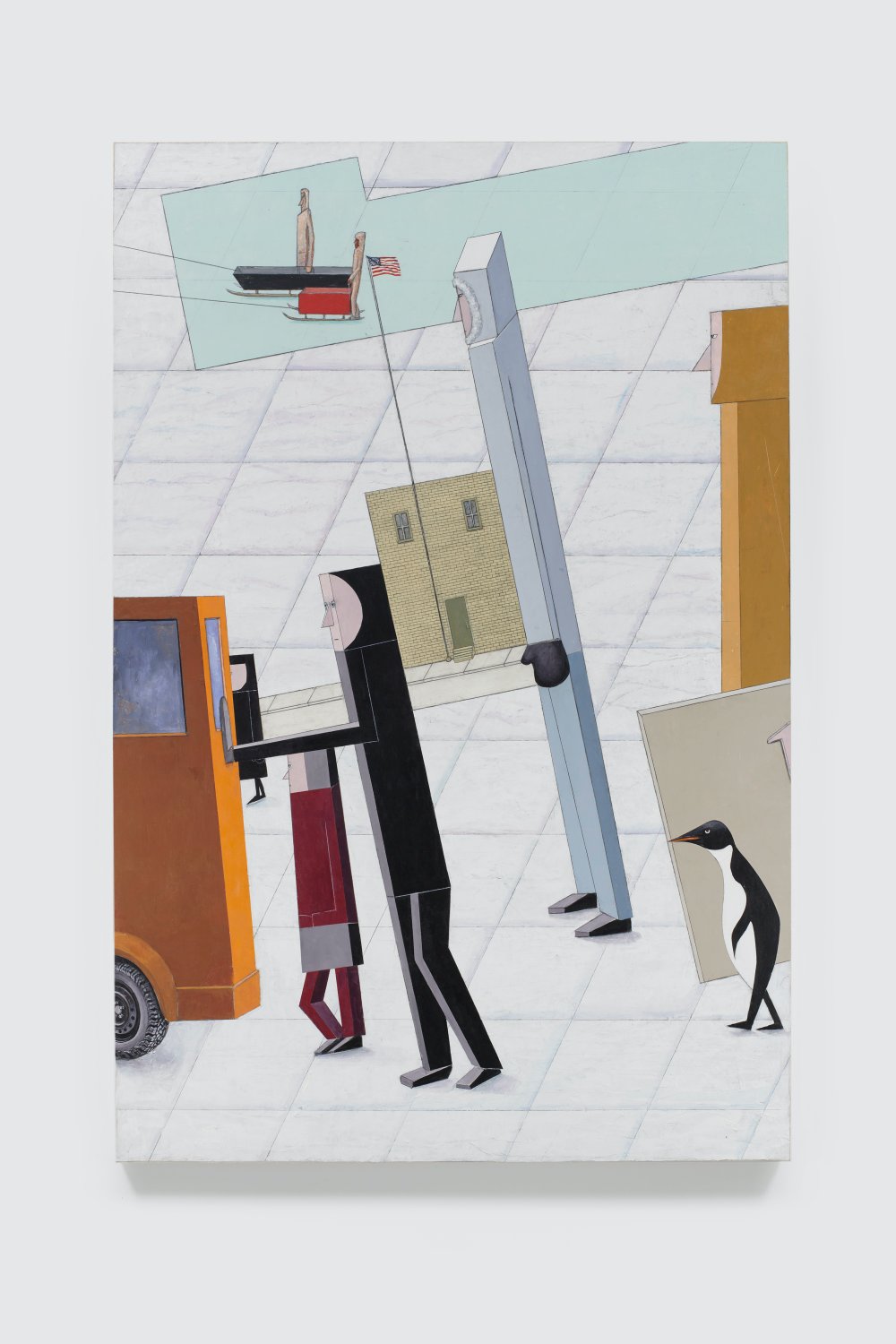 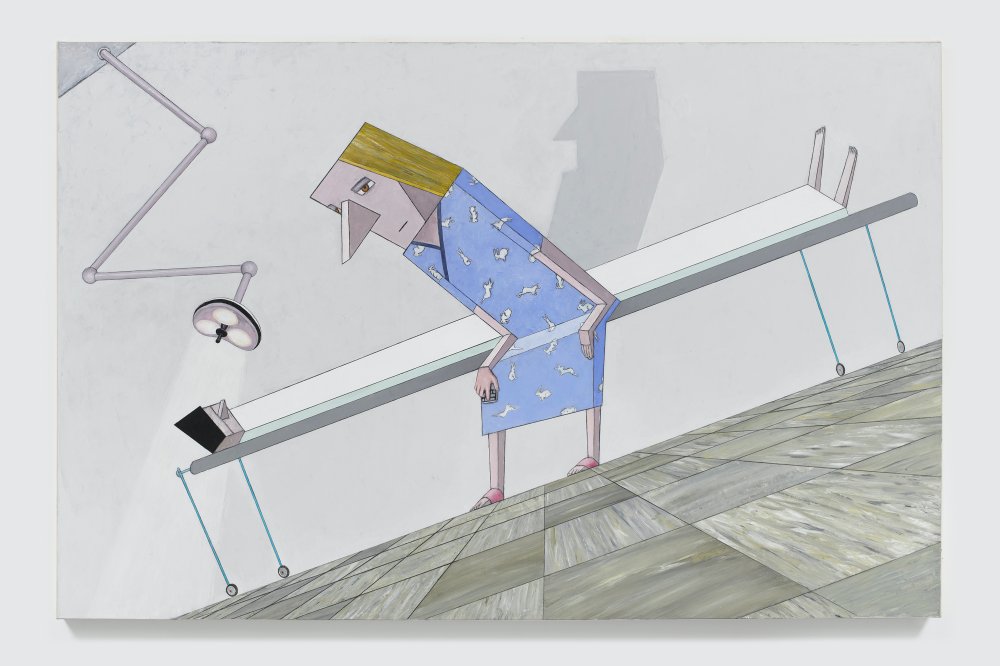 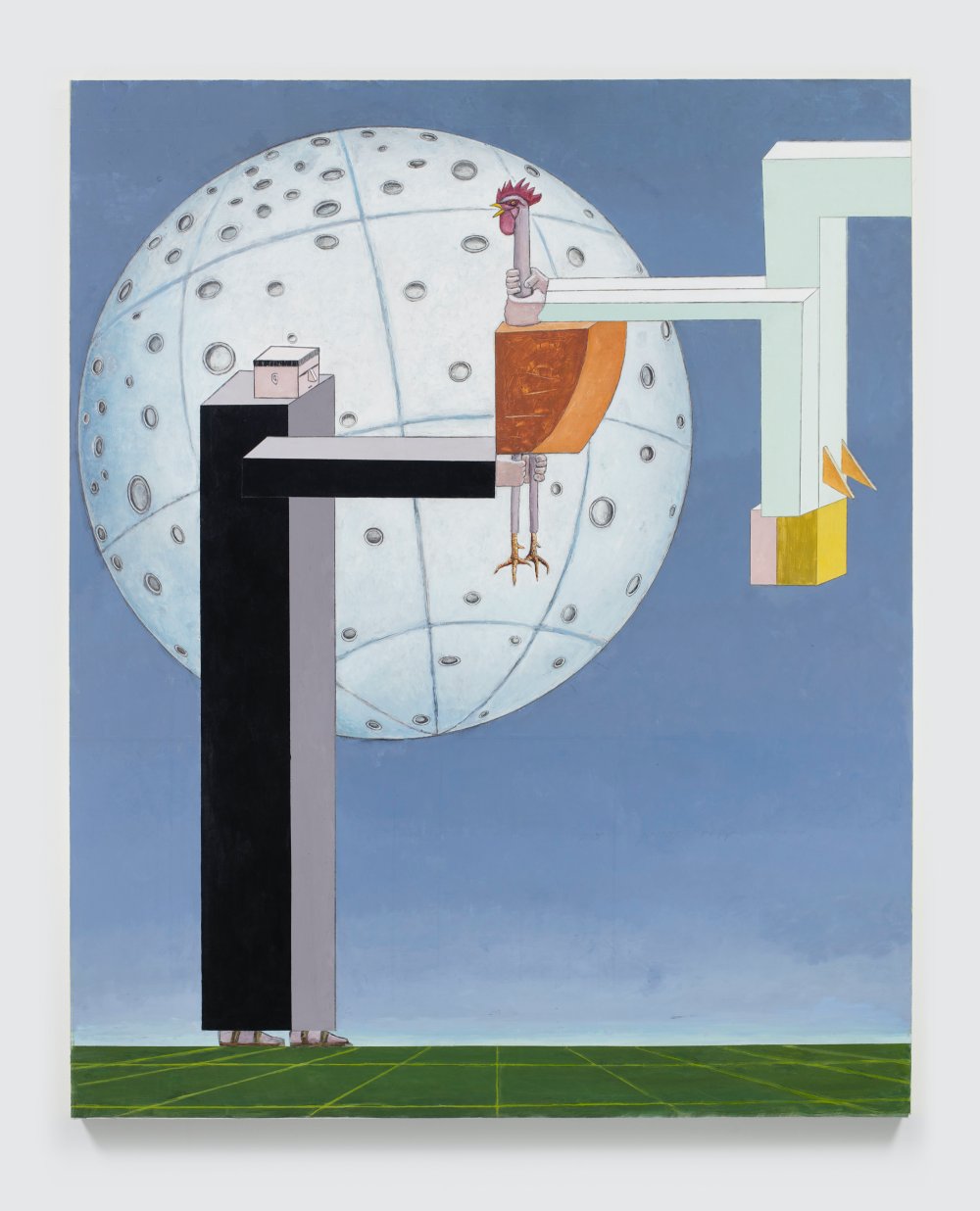 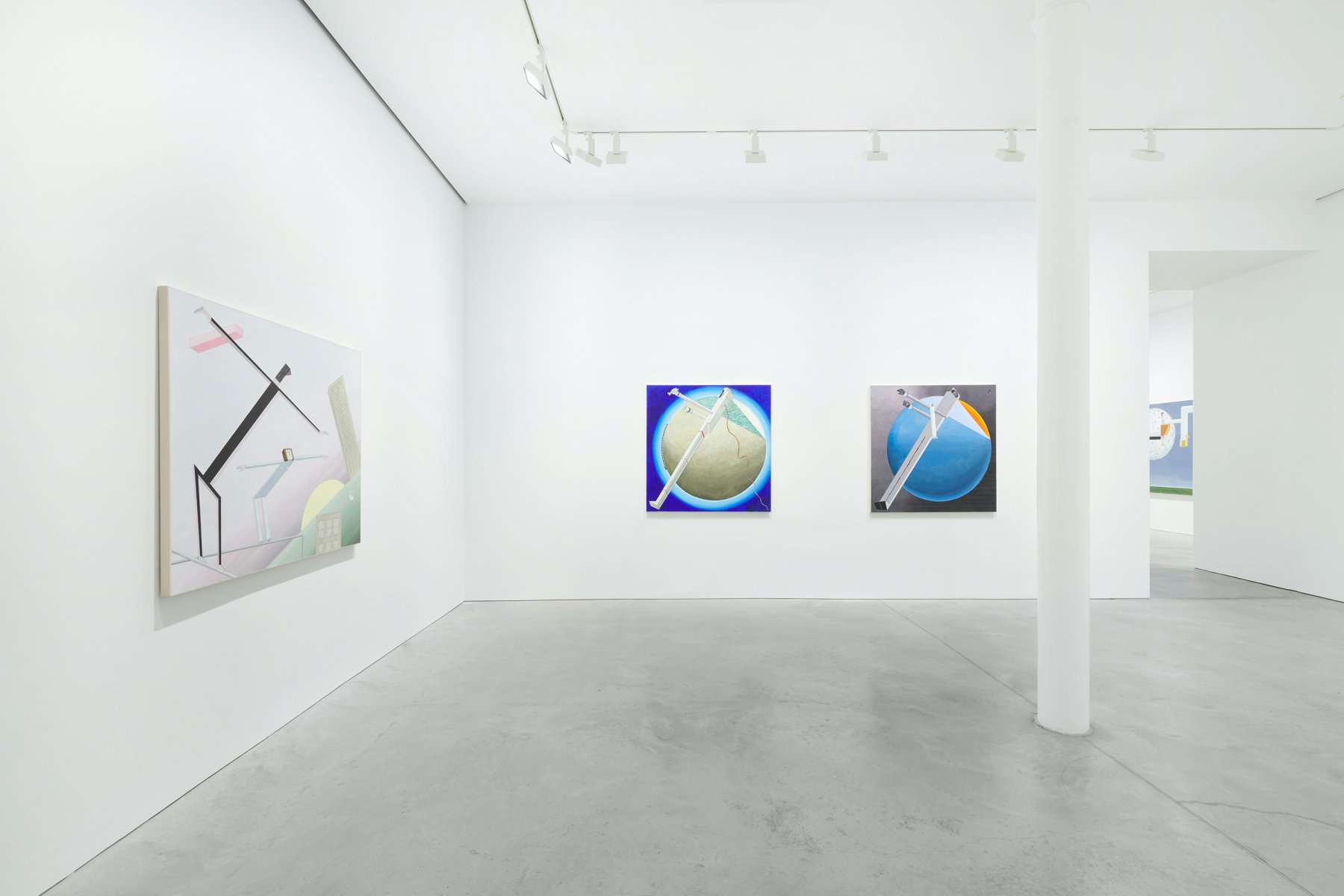 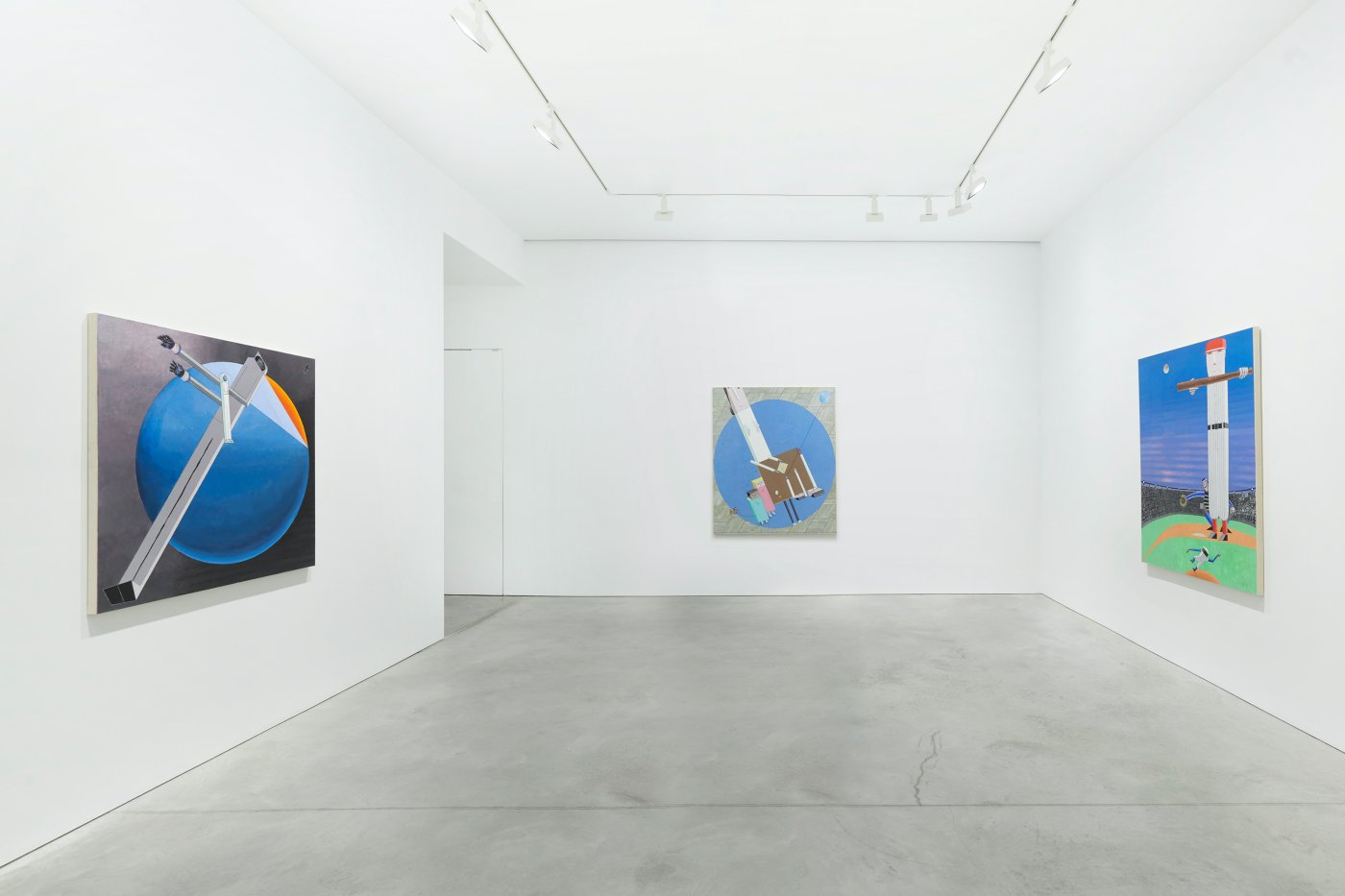 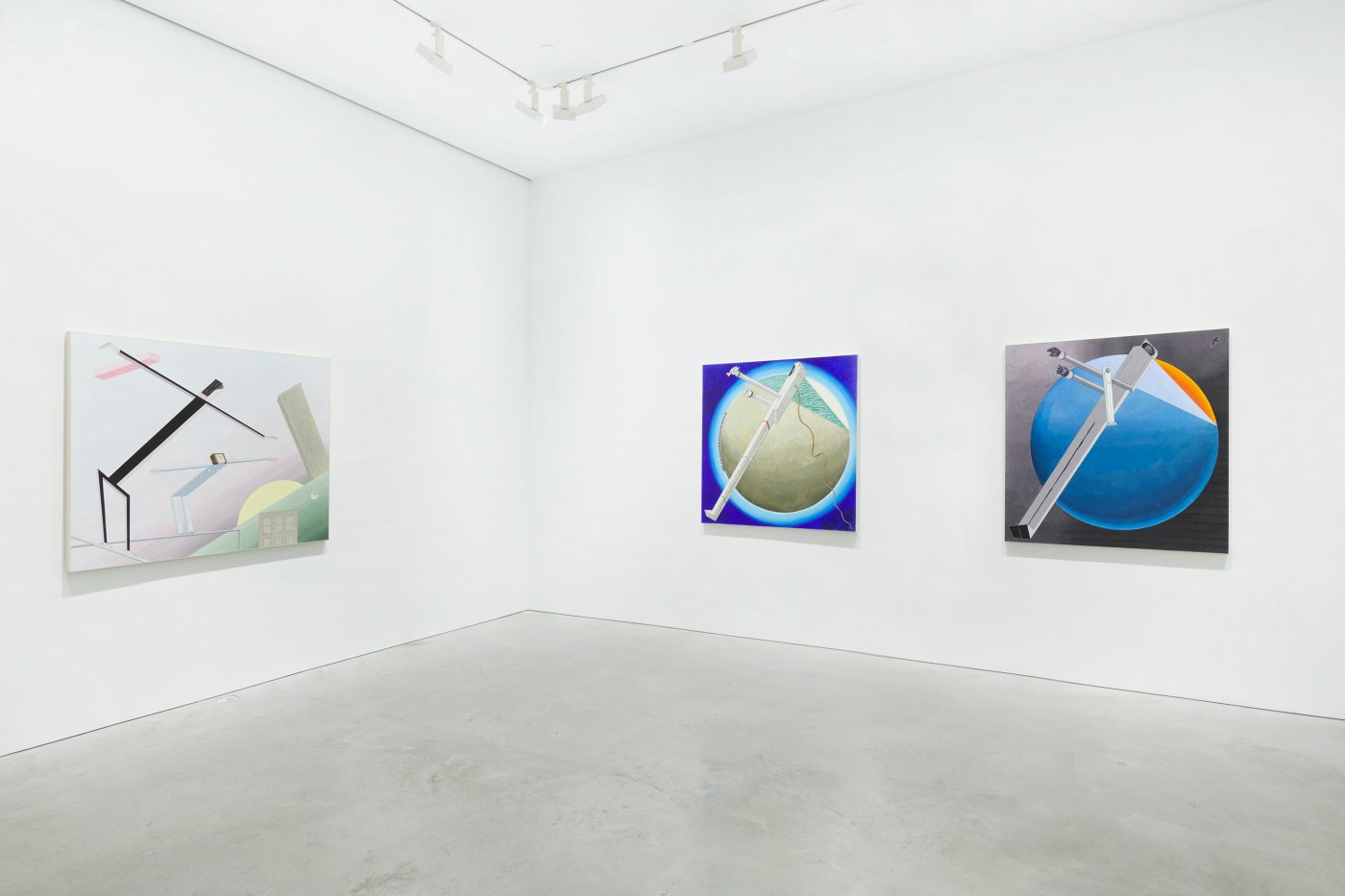 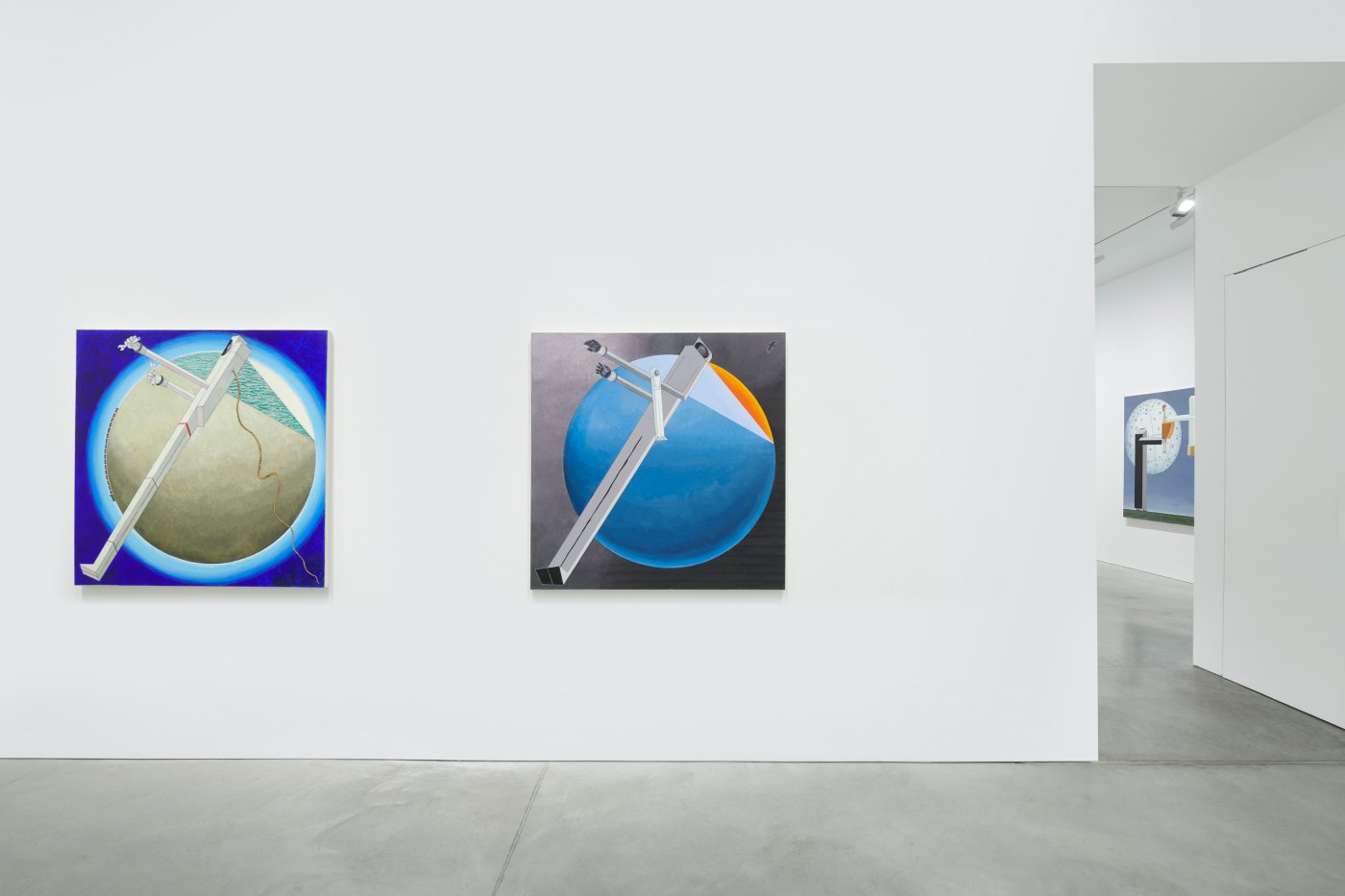 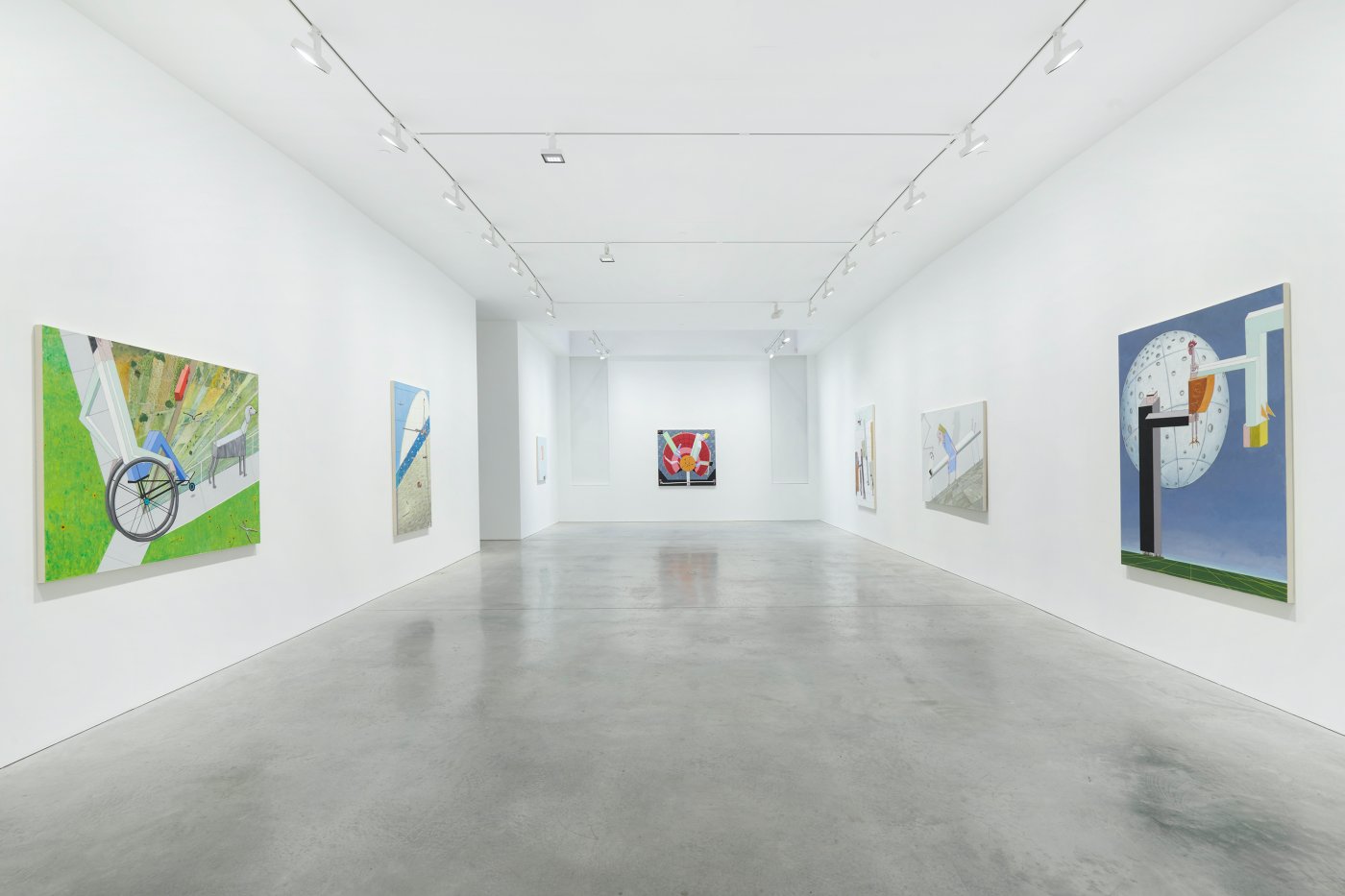 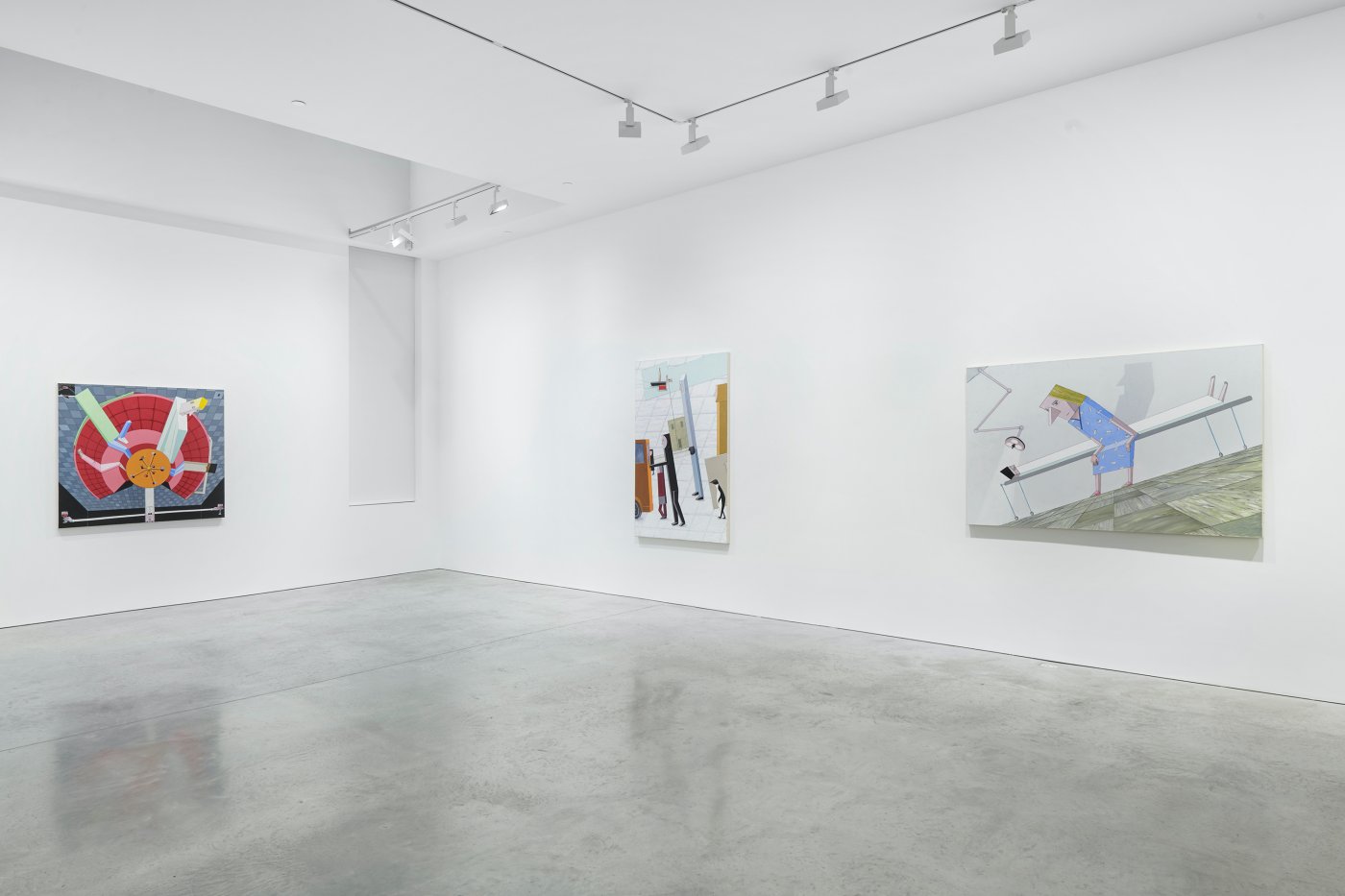 In conjunction with the exhibition’s opening week, the gallery will host a virtual studio visit with the artist and Veronica Roberts, Curator of Modern and Contemporary Art at the Blanton Museum of Art, on Friday, December 4 at 2 PM EST. The exhibition is accompanied by a major retrospective monograph, featuring essays by Veronica Roberts and Susan Thompson, as well as an in-depth interview between Mernet Larsen and Hans Ulrich Obrist.

For over six decades, Mernet Larsen has created narrative paintings depicting hard-edged, enigmatic characters that inhabit an uncanny parallel world filled with tension and wry humor. Larsen employs various spatial systems that often contradict: combining reverse, isometric, and conventional perspectives, she casts everyday scenarios into a vertigo-inducing version of reality akin to our own. Drawing from influences that range from the non-objective geometries of Russian Constructivism to Bunraku puppet theater and Indian miniatures, her works take compositional cues from art of the past as springboards for uniquely spatial figure-paintings that speak to the anxieties of the present.

The twelve works in this exhibition belong to the ever-evolving body of narrative painting Larsen has been developing for over twenty years. Larsen’s interest in representation stems from a turning-point in 1999, about which she recalls: “I decided that I wanted to paint old-fashioned narrative paintings with volume and depth and the essences of significant actions. I developed a longing for pictures evoking a classical sense of permanence, solidity, in the spirit of 15th century Italian painting. But I knew that essences must be constructed, not uncovered.” With an emphasis on paring down, understanding, and manipulating the spatial elements of narrative painting, in the decades that followed Larsen sought to utilize the language of abstraction—rather than illusionism—as a means to access a more authentic form of representation. The paintings in this exhibition excavate the non-objective compositions of El Lissitzky, a central touchstone for Larsen. Using his abstract forms as parameters for free-association, Larsen slowly builds geometric structure into a psychological ordering of representational space to construct what Veronica Roberts calls “some of the most beguiling and psychologically complex narrative paintings of the 21st century.”

In Astronaut: Sunrise (after El Lissitzky) and Astronaut: Sunset (after El Lissitzky) both 2020, Larsen uses the lines and abstract forms of a 1924 composition by Lissitzky as visual templates in the process of assembling planes to construct figures in space. The resulting paintings each depict a planet undergoing a phase transition with an astronaut floating in the foreground, all rendered in reverse perspective. These vertigo-inducing spaces lack any implicit horizon line or a reliable vantage point. Larsen seeks to disorient the viewer and destabilize “fixed” perspective, in this case making visible the unseen dimensions of this cosmic narrative. Departure, 2020, translates the geometries and palette of its source composition into a slanting, unsettling depiction of a group of laborers moving vehicles and—absurdly—a small Post Office building, within a wintry landscape. Rendered in parallel perspective, the composition is built on diagonal axes that suggest a destabilizing state of perpetual motion. Larsen’s compositions suggest perception has the ability to transform the way that we see the world around us. By shifting the way we prioritize visual information, this new body of work reinforces Larsen’s long standing conviction that paintings may “restore faith in the possibility that the world is still ungrasped by consciousness.”

Mernet Larsen (b. 1940, Houghton, Michigan) has exhibited extensively since the late 1970s and has been the subject of over thirty solo exhibitions, including Mernet Larsen: The Ordinary, Reoriented, Akron Art Museum, 2019, and Getting Measured: Mernet Larsen, 1957-2017, Tampa Museum of Art, 2017. She has been featured in more than seventy group exhibitions, including presentations at the National Museum of Women in the Arts, Washington D.C., the American Academy of Arts and Letters, New York, NY and multiple other exhibitions in London and New York. Her work is in numerous collections, including the Whitney Museum of American Art, New York, NY; the Los Angeles County Museum of Art, CA; the Carnegie Museum of Art, Pittsburgh, PA; the Museum of Fine Arts, Boston, MA; the Walker Art Center, Minneapolis, MN; the Alfond Collection of Contemporary Art, Cornell Fine Arts Museum, Rollins College, Winter Park, Florida; the Israel Museum, Jerusalem, Israel; and the Art Gallery of New South Wales, Sydney, Australia, among others. Larsen received her BFA from the University of Florida, and her MFA from Indiana University. She lives and works between Tampa, Florida and Jackson Heights, New York.