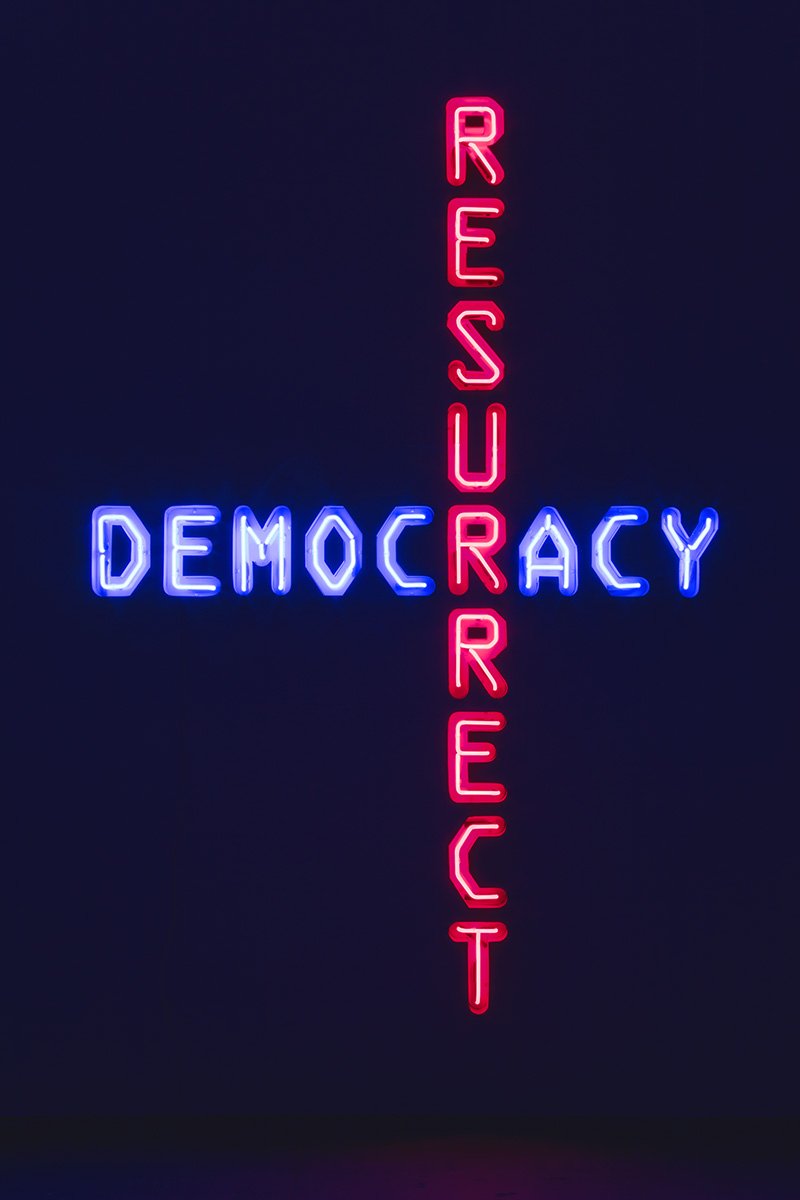 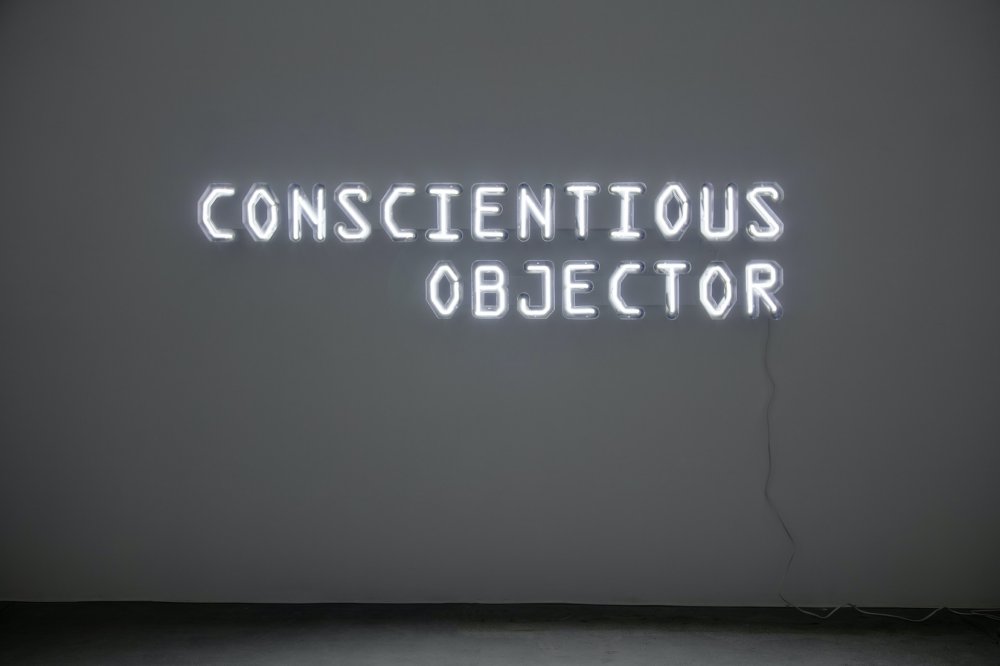 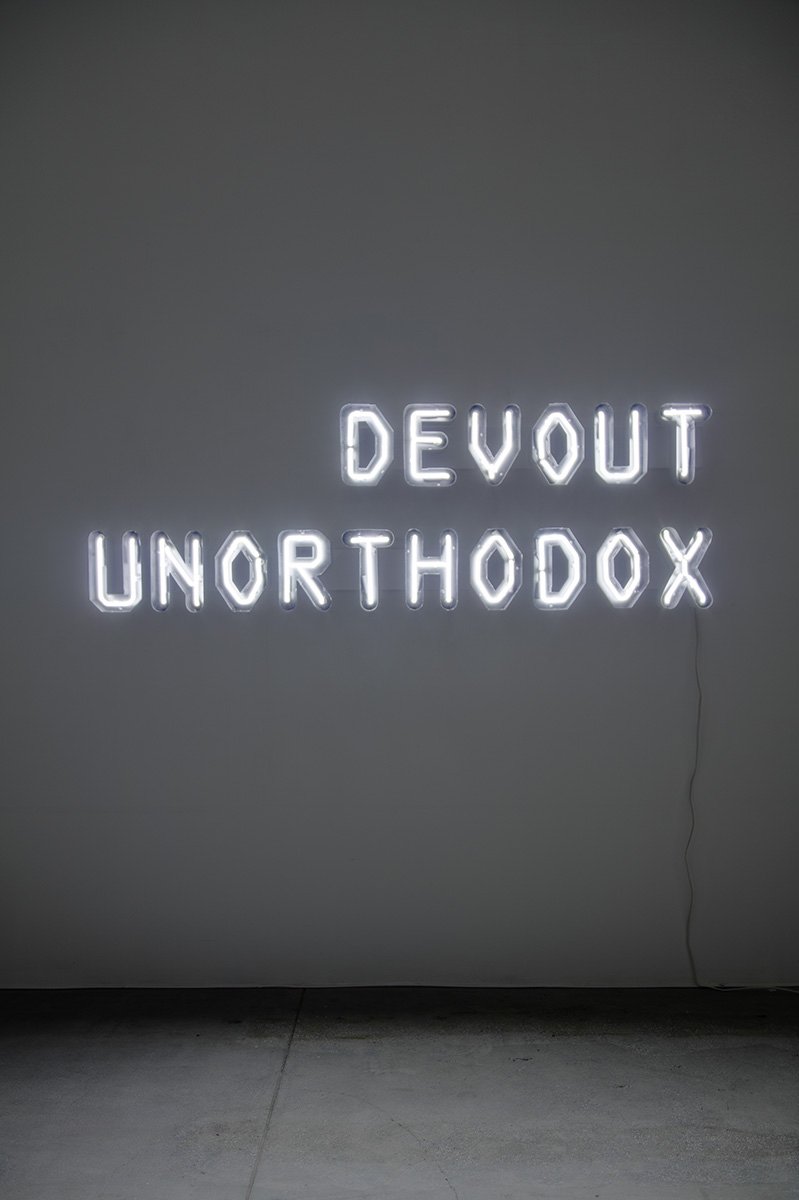 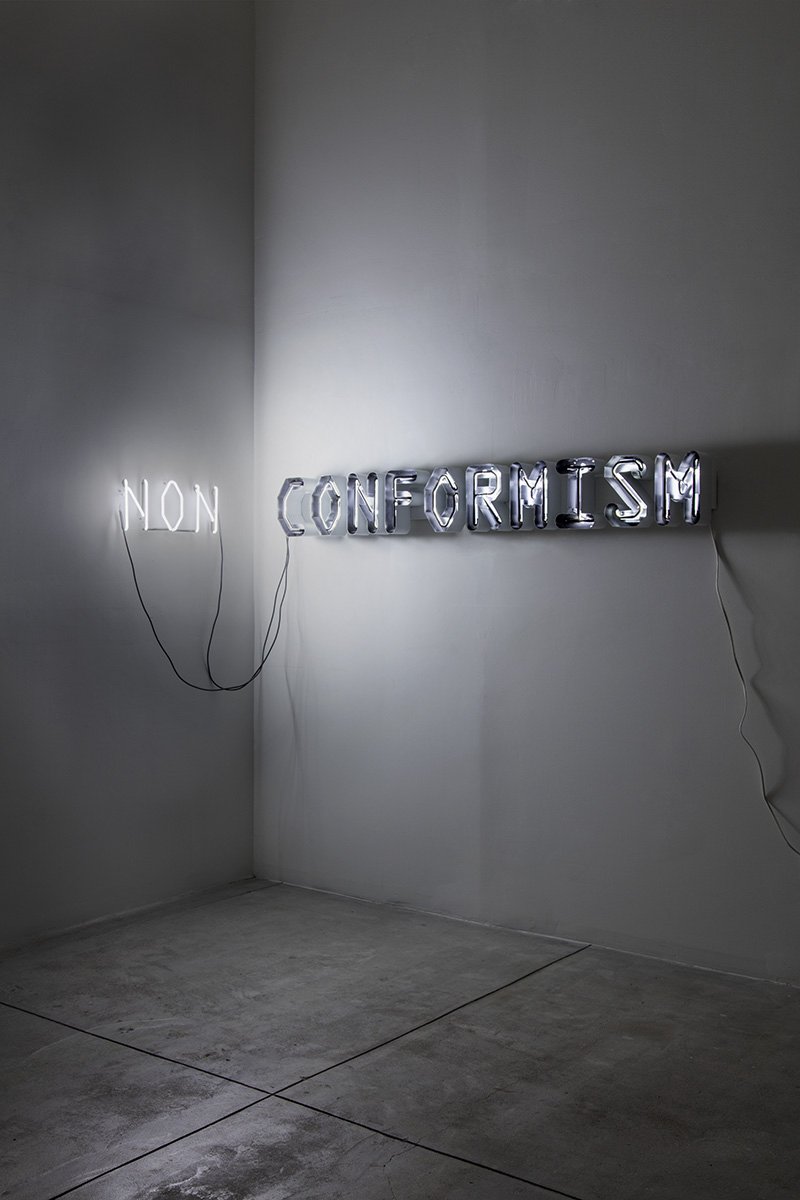 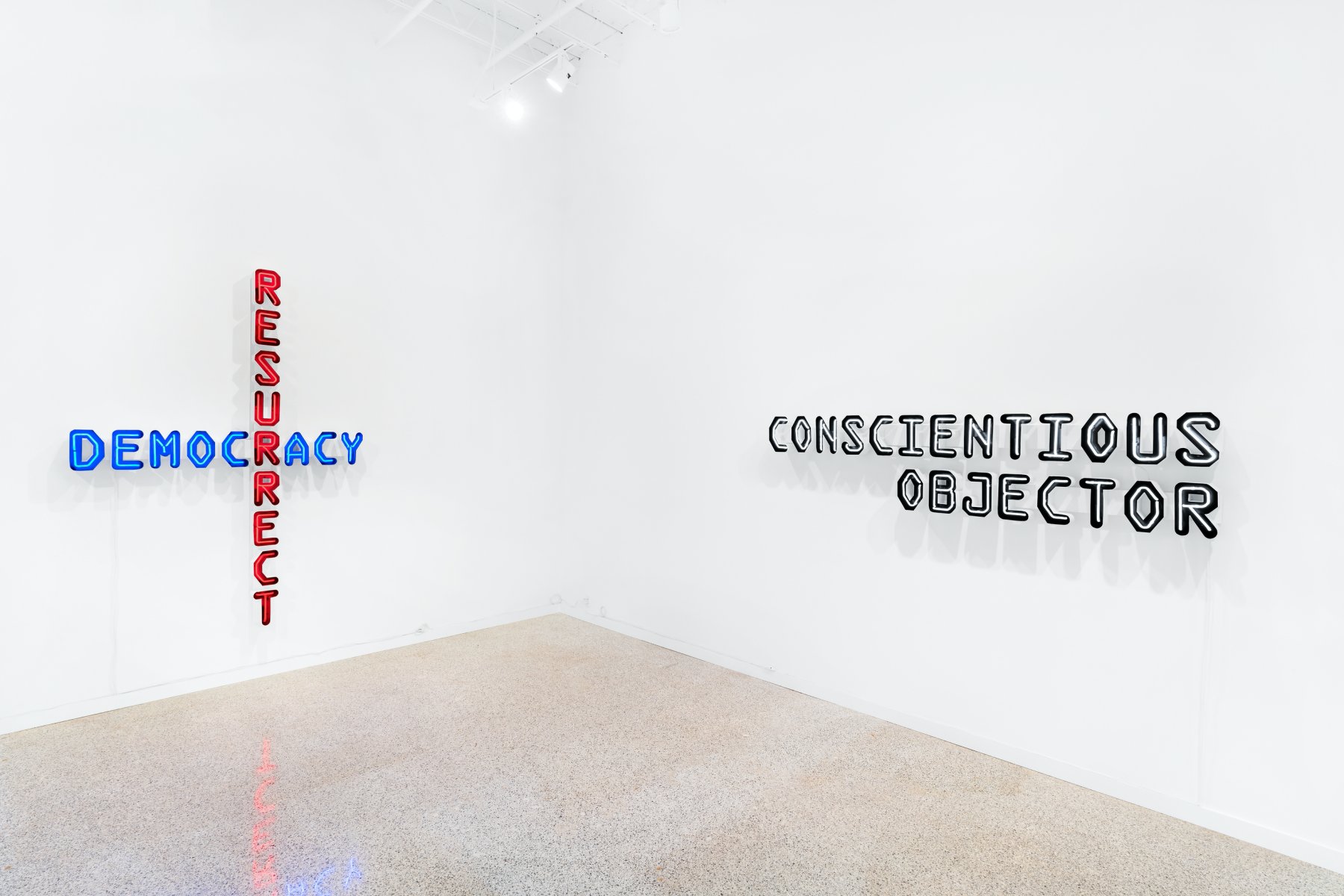 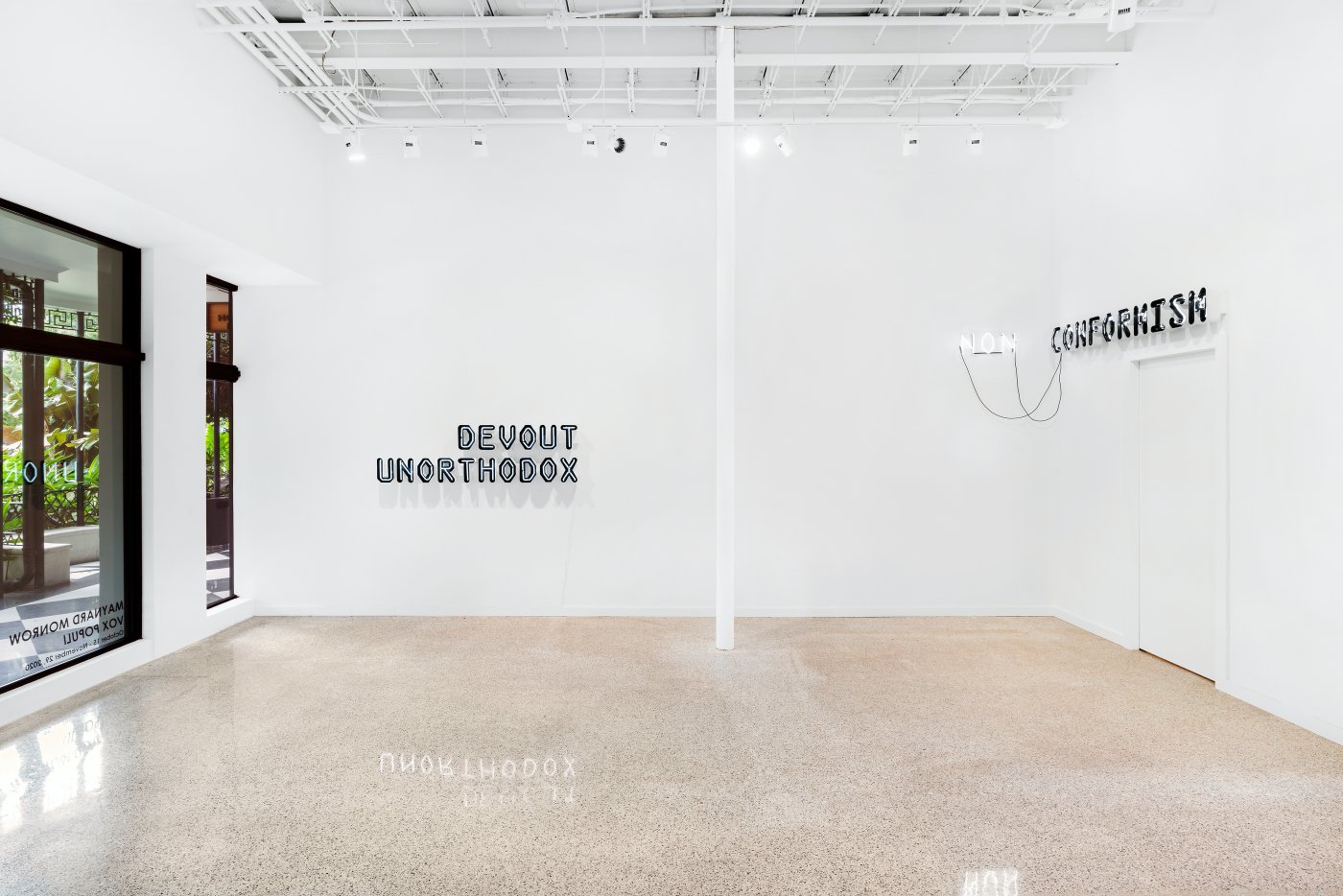 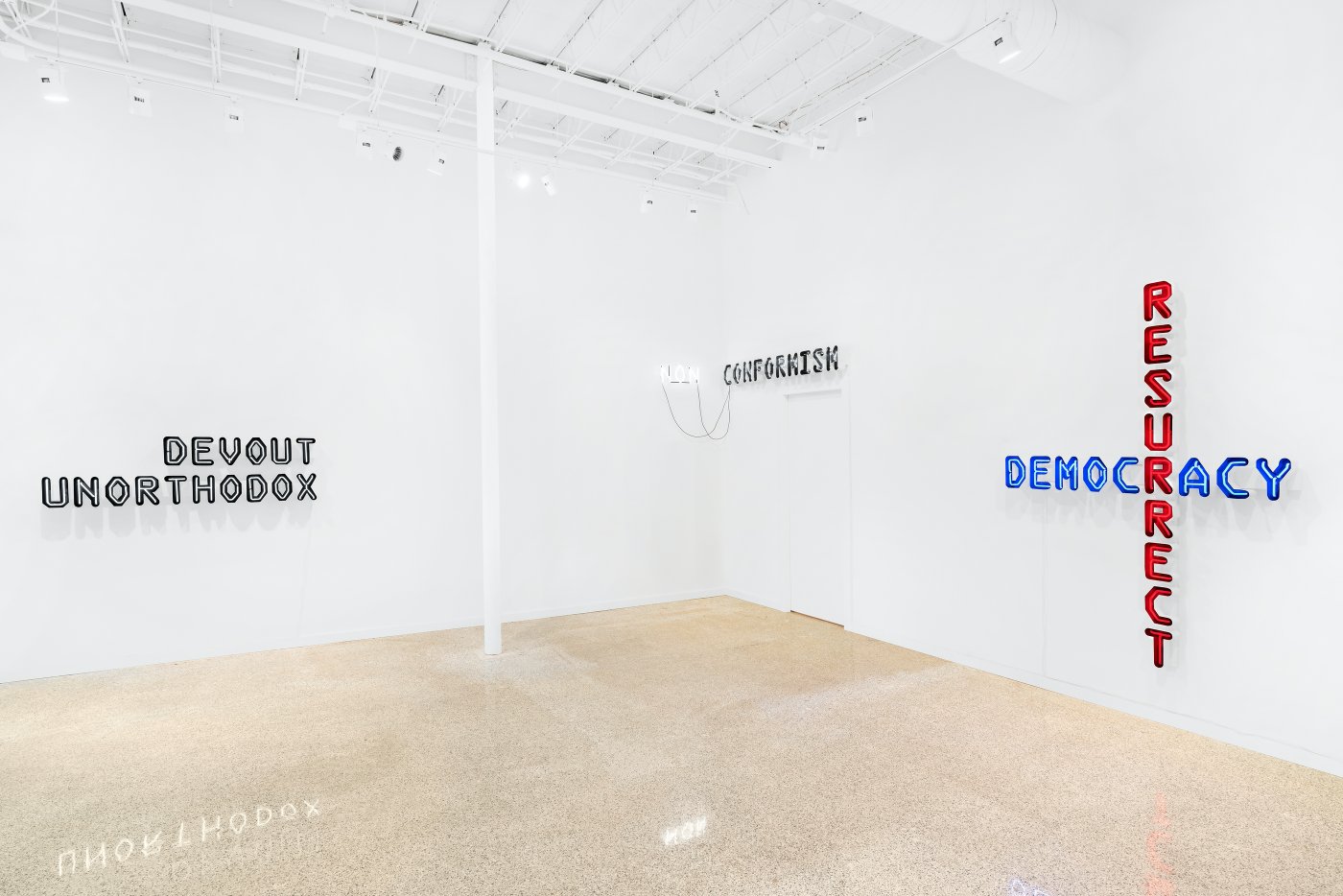 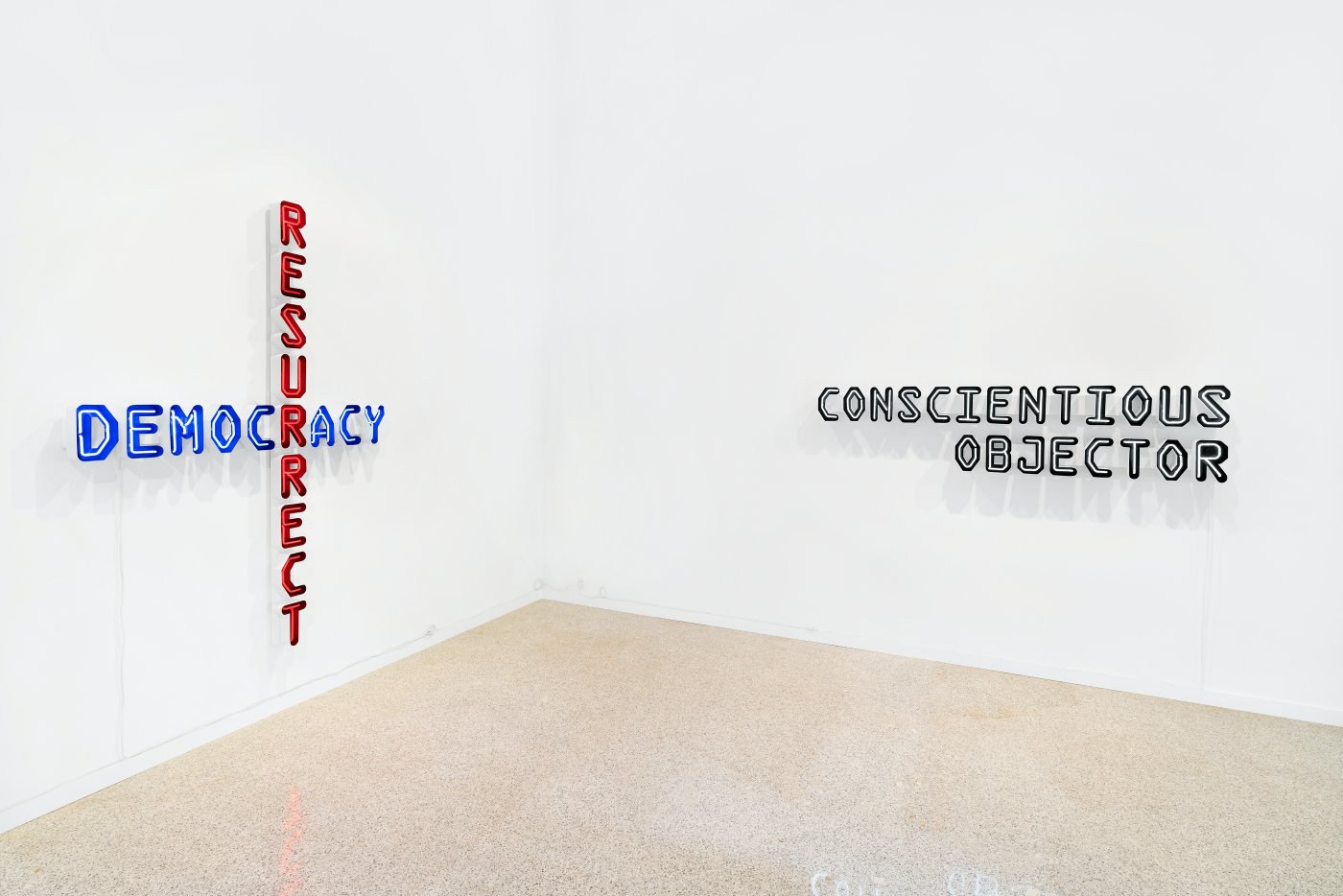 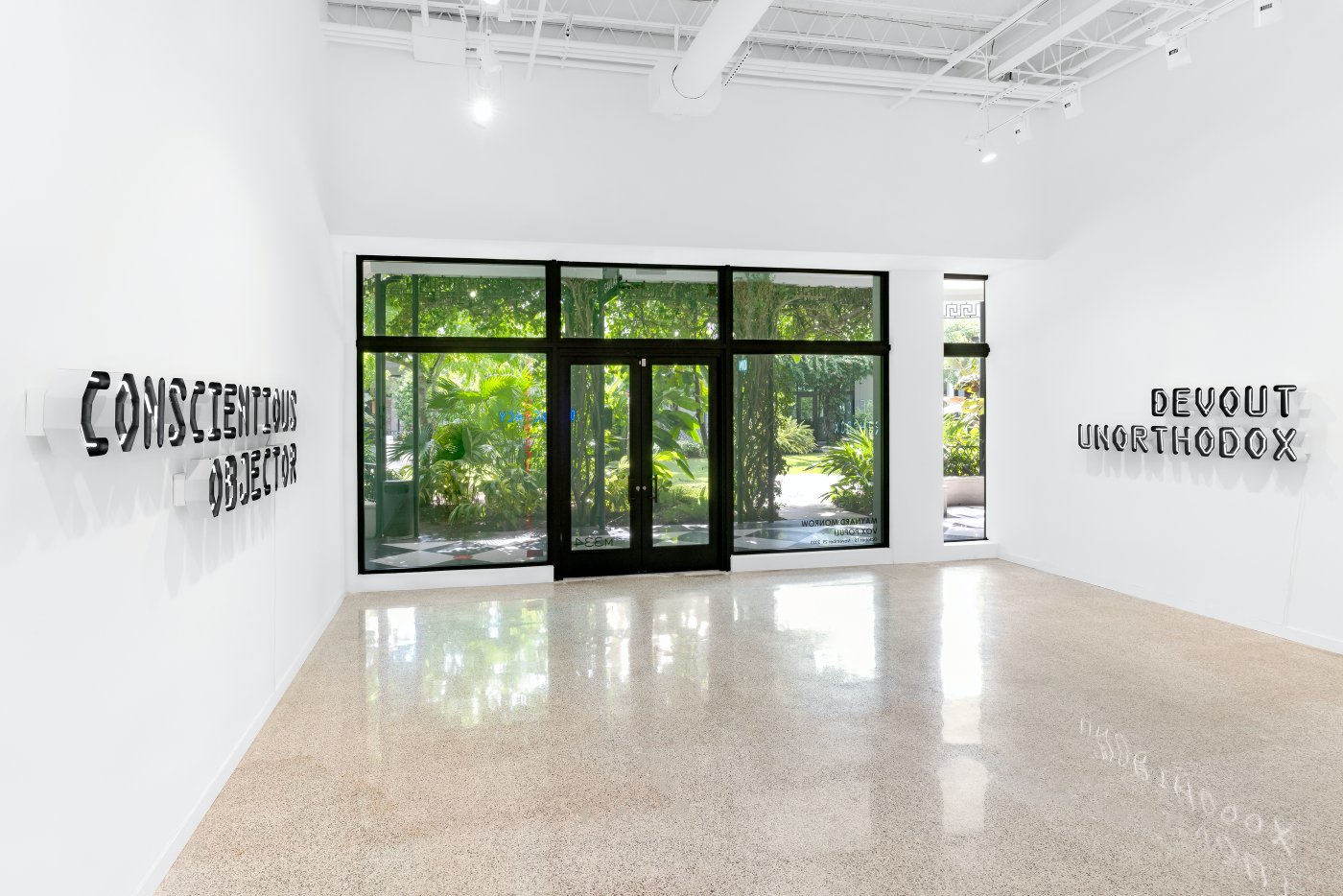 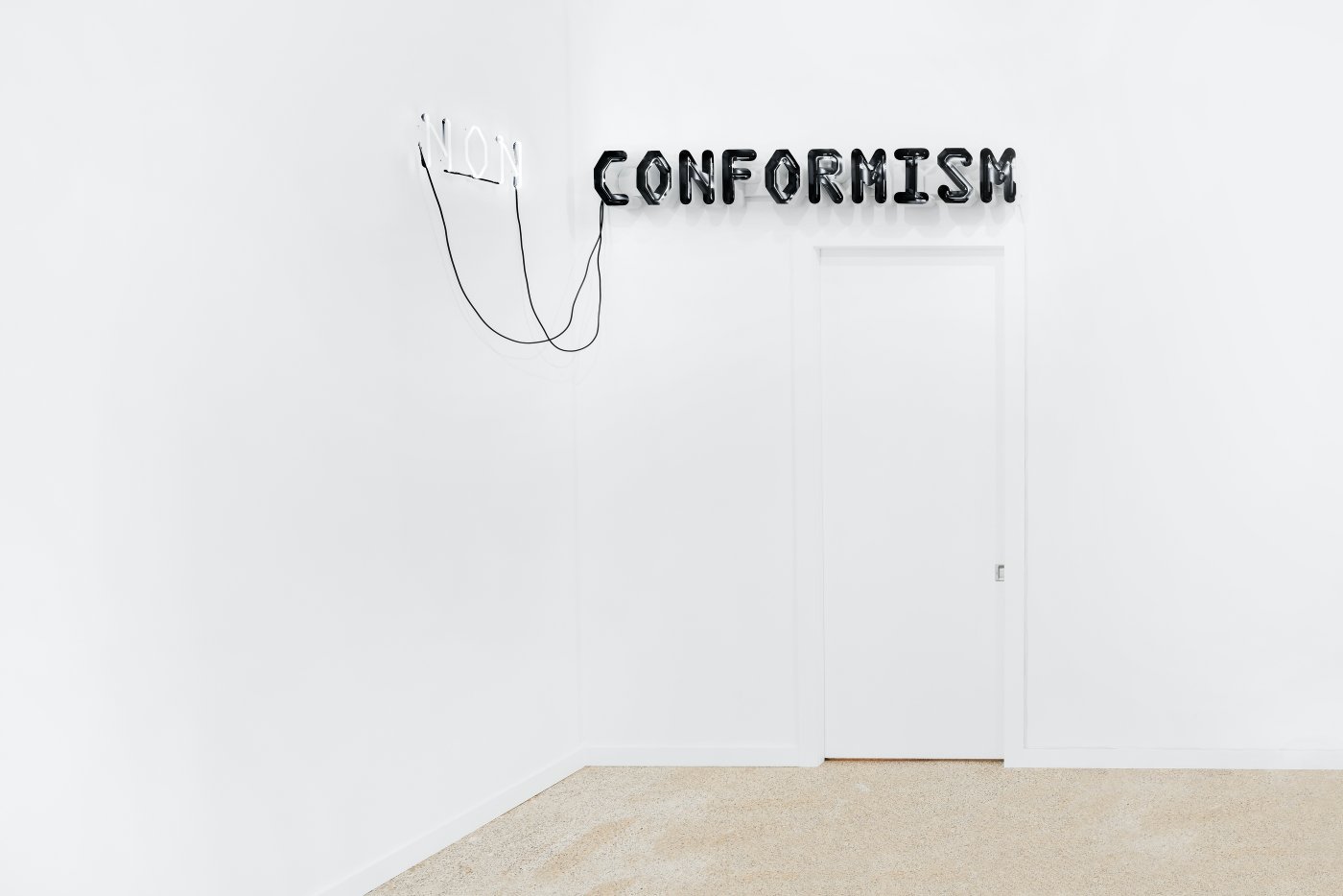 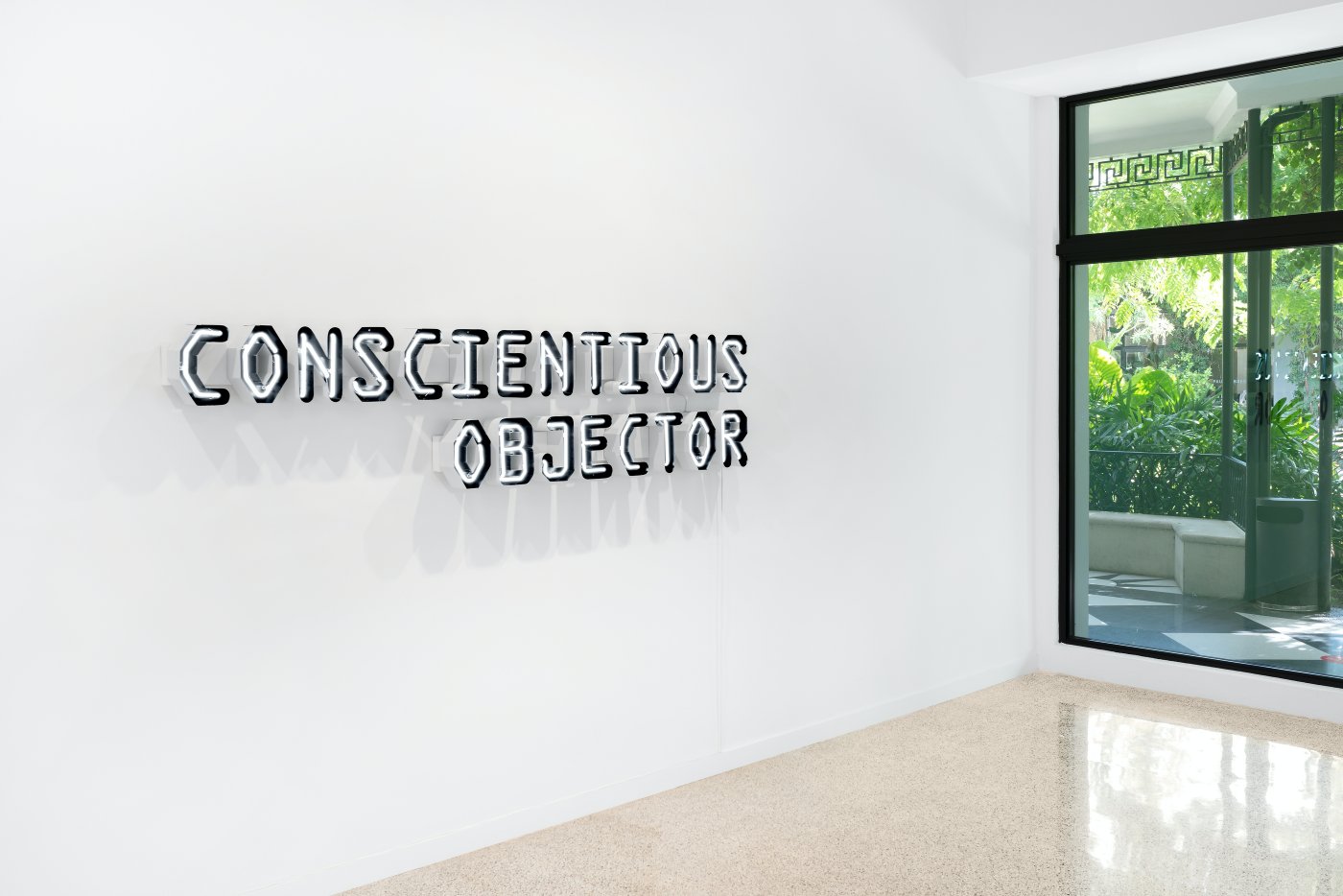 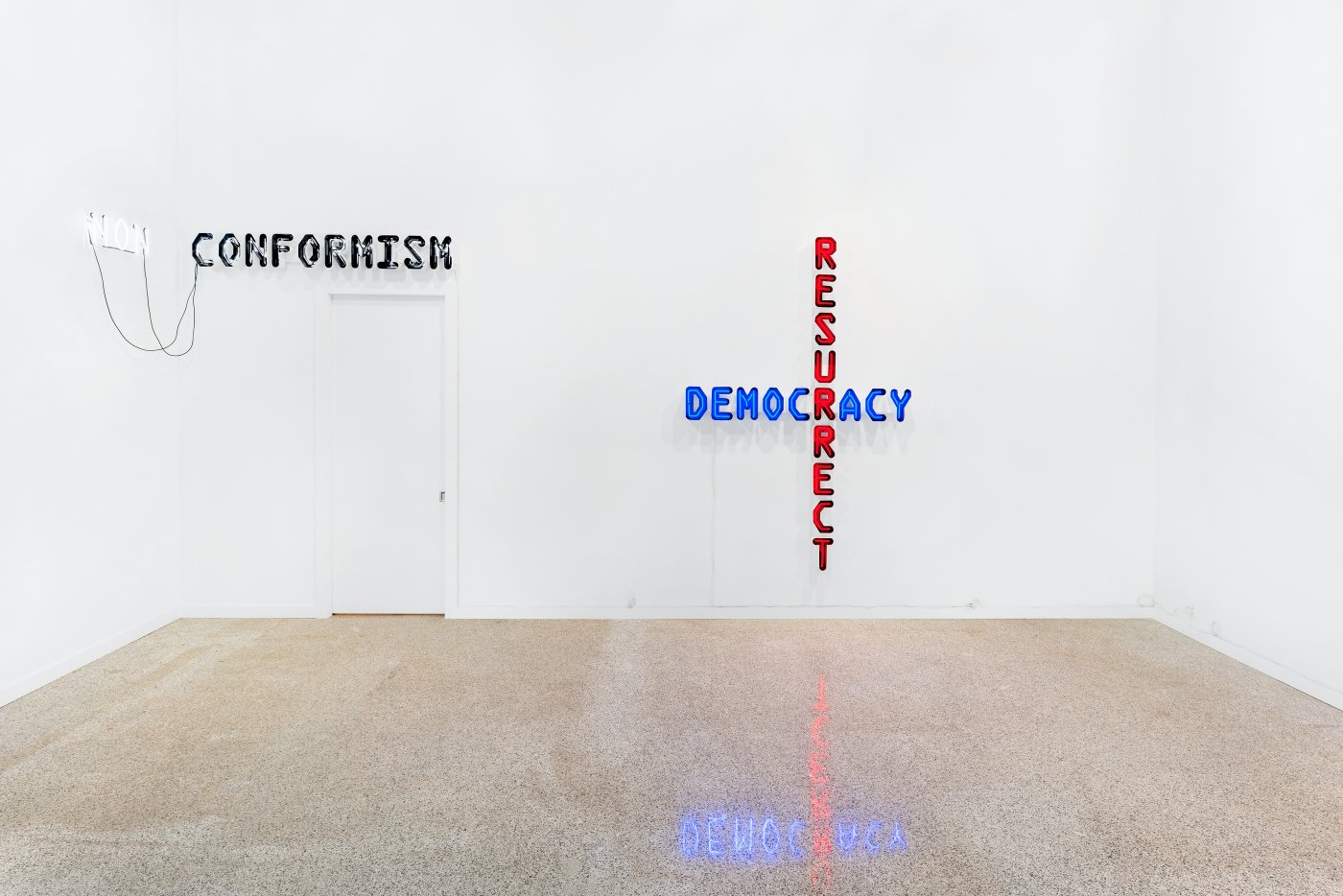 American society is currently undergoing a national reckoning on race, the effects of which we have only begun to face. In the wake of flagrant attacks on civil rights, enduring protests against police brutality and racial injustice, countered by right-wing “law and order” rhetoric and appeals to American greatness, Vox Populi serves as a public plea for action. “Democracy is in danger of being arrested, convicted and sentenced,” warns Monrow. Vox Populi reminds us that the time for action is now.

By the 8th century, the Latin phrase Vox populi, vox Dei (“the voice of the people [is] the voice of God”) had become a proverb of political common wisdom. Shortened to ‘Vox Populi,’ the saying has come to signify the will of the public majority. In our fragmented and deeply divided political landscape, finding a common voice seems like an unachievable feat. But art has always been useful for bridging divides and encouraging understanding of new and different views.

For Monrow, inspiration lies in current events, what he calls “The Immediate Here & Now.” Informed by his interest in art history, critical theory, and culture, his text-based work features witticisms, bon mots, and maxims ranging in tone from the quotidian to the extraordinary and the polemical to the uncontroversial. Combining humorous sophistication with a pragmatic approach, Monrow’s text-based sculptures are rendered in readymade industrial formats such as café menu boards and stanchions signs.

For this exhibition, Monrow has chosen to work exclusively in neon, creating four provocative and humorous phrases that pulsate and flicker in hues that recall the United States flag. Each neon letter is housed in an aluminum frame, underscoring its shape and creating reflections and shadows throughout the sculpture. Fabricated to hang as one unit, the pieces mimic classic neon signs while subverting their commercial dimension as a cultural object.

The centerpiece of the exhibition, RESURRECT DEMOCRACY, is symbolic in its color choices: red for the resurrection and the GOP (Grand-less Old Party), and blue for the vastness of the sky and the idea of heaven and the Democratic party or the notion of democracy. The other three works are black with white neon, a dichotomy Monrow continues to explore: black, a color that is the absence or the complete absorbance of light, and white being the color that fully reflects and scatters all visible light, while both have no hue.

With his piece NON-CONFORMISM, Monrow challenges the viewers to reconsider preconceived notions and internalized beliefs. Mounted at the place where two walls intersect, the words inevitably face away from each other, cornering the viewer with their own thoughts as they confront the piece. The opposite wall features CONSCIENTIOUS OBJECTOR, which prompts a questioning of one’s inner sense of morality and reflection on the current political climate. By shining a white neon light on the room, DEVOUT UNORTHODOX– the fourth and last maxim featured in Vox Populi– sums up the artist’s own faith.

Through constantly typing ideas and words into his iPhone notes app, Monrow hopes to save and savor each witticism. Working exclusively with text, he is, by definition, a wordsmith, but leaves room for viewers to provide their own interpretation for the thoughts and feelings his words engender. Vox Populi transports the audience beyond mere reflection and into a state of deep thought and contemplative transcendence.