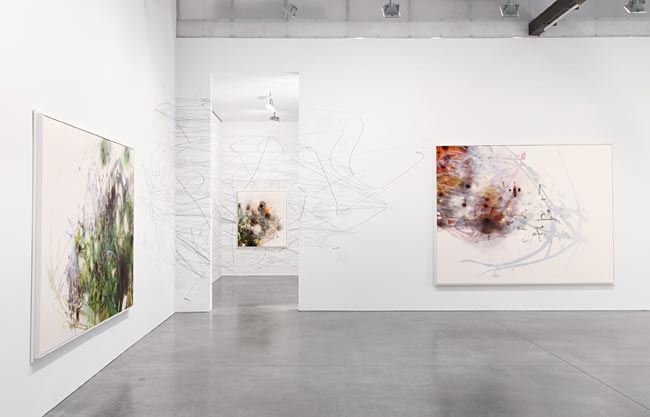 The ‘Ten Possible Links’ are a series of subtly vibrant and densely layered paintings that investigate the abstract imagery of Ritchie’s sculpture and cinematic landscapes through multiple diagrammatic and painterly gestures. Within an organic amassing of form, Ritchie creates densely layered eco-systems of information, retaining multiple styles of presentation. These canvases contain activity of complex natures, experiences, states, but their rich and saturated beauty also captures moments of stillness where something impossible to grasp is left un-grasped. The images are saturated with light and meaning, but bruised, as if the very process of examination is changing the physics of the forms described. Posed against a white ground, they could be emerging from what Paul Klee called ‘the interworld’, the dimensionless space of possibility.

The fragmentary diagrams within the paintings are all contained within the immersive wall installation The Temptation of the Diagram, an immense network of diagrams, collected, mapped, digitized, stripped of legible signs and reprocessed into essential gestures. Two accompanying source-books offer a guide for viewers through this vast investigation of the complex systems underlying the human creative and representational process and represent the origin and foundation of the works shown within its circuit. Confronted with the impossibility of comprehending the whole – what the artist describes as an oceanic feeling – Ritchie locates our sense of a vast universe without the abandonment of meaning. Together, the installation and the books describe generations of systems, ideas, interpretations, and reinforce the idea that it is the diagrammatic impulse that insistently connects, links and draws ideas together regardless of the possibility of ultimate comprehension. In doing so, Ritchie emphasizes the double constitution of painting and drawing as forms of ’hypostatic abstraction’ – a kind of abstraction that carries various levels of meaning.

Nested within this sprawling cerebral web of information is Night Drawing, a sculpture comprised of a matrix of interlocking segments designed to passively nest within one-another, creating a puzzle-like structure. Each segment employs the artist’s specific vernacular of form, and is drawn from the universe of diagrams that surround it. Mathematically based on modeling strange attractors explored in collaboration with architects Aranda\Lasch, the laser-cut aluminum construction takes two-dimensional form into a realm of three-dimensional drawing, forming a double moebius strip.

Expanding the space of drawing and painting into the realm of the moving image, Ritchie’s hyper-saturated film, Monstrance, traces an abstract and romantic narrative of past, present and future, as he mixes live performance footage and animation for the first time in his practice. Cut to a polyphonic choral score composed and performed by Ritchie’s long-standing collaborator Bryce Dessner, the film features singer Shara Worden as a masked oracle, presiding over a mythic, or post-post apocalyptic seascape. Created to be exhibited within a longshoreman’s chapel in Boston as part of his current residency at the ICA Boston, the film contains within its landscapes and choreographed gestures subtle diagrams and information that make visible the greater network of links underlying his practice.

Over the last seven years, through substantial cross disciplinary collaborations, Ritchie has consciously extended his own projects to explore the possibility of shared systems, aggregations and collaborations in contexts as diverse as opera, contemporary music, architecture, horticulture, urban design, theology and science through endeavors, both collaborative and intimate, to concretize and realize ephemeral and intangible theories of information and time. This exhibition proposes a further step, the re-integration of these diverse practices into a network of connections, a shared sea of information that retains its distinct properties in a state of superposition. In ‘Superposition and Field’, recently published by MIT press, Ritchie writes, “not only are ‘form’ and ‘contentʼ the same thing, namely information, but they are super-positionable and therefore do not enjoy any inherent oppositions at any scale.” ‘Ten Possible Links’ specifically refers to a navigational diagram by the philosopher Graham Harman that describes this aspect of what he calls ‘the quadruple object’ and is the subject of an essay by Ritchie in the forthcoming ‘Realism, Materialism, Art’ published by Sternberg Press and Bard CCS. In the essay Ritchie writes: “Over the last two centuries, the diagram has become the essential mechanism for our collective efforts to articulate and negotiate an almost impossible circumstance: reality itself. It embodies our interest in humanity as a directed and limited quantity, one we all have a vested interest in understanding and extending to the very limits of our abilities.” For Ritchie, acknowledging our incapability of grasping the totality of the universe is not simply a reason to let go, but also the vital force that compels investigation.

Matthew Ritchie was born in 1964. Ritchie is currently subject of an 18-month interdisciplinary residency at the Institute of Contemporary Art, Boston which encompasses several major works and will activate the entire museum through installation, sound performance and video. A new molecular sculpture garden for the Food and Drug Administration, Silver Spring, Maryland will open on October 1, 2014 and a 15,000 square foot site-specific rooftop drawing for a building in Miami designed by Aranda\Lasch, will open for Design Miami on December 3, 2014. His work has been shown in numerous exhibitions worldwide, including the Whitney Biennial, the Sydney Biennial, the São Paulo Biennial, the Venice Architecture Biennale, the Seville Biennale, and the Havana Bienal, and is in the permanent collections of the Museum of Modern Art, Institute of Contemporary Art, Boston, Guggenheim Museum, Whitney Museum of American Art, San Francisco Museum of Modern Art, and other institutions worldwide, including a permanent large-scale installation at the Massachusetts Institute of Technology.

Courtesy of the artist and Andrea Rosen Gallery, New York