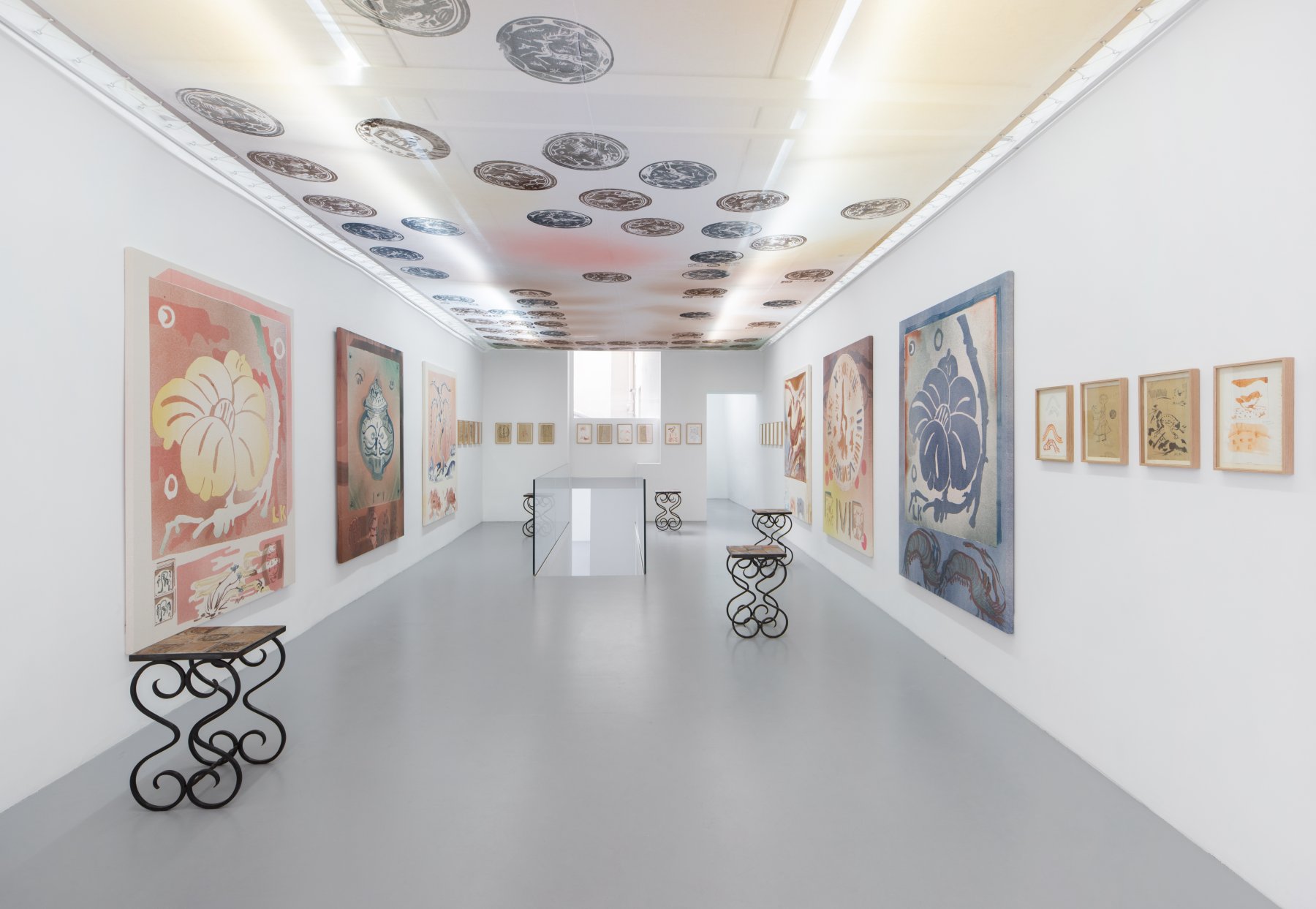 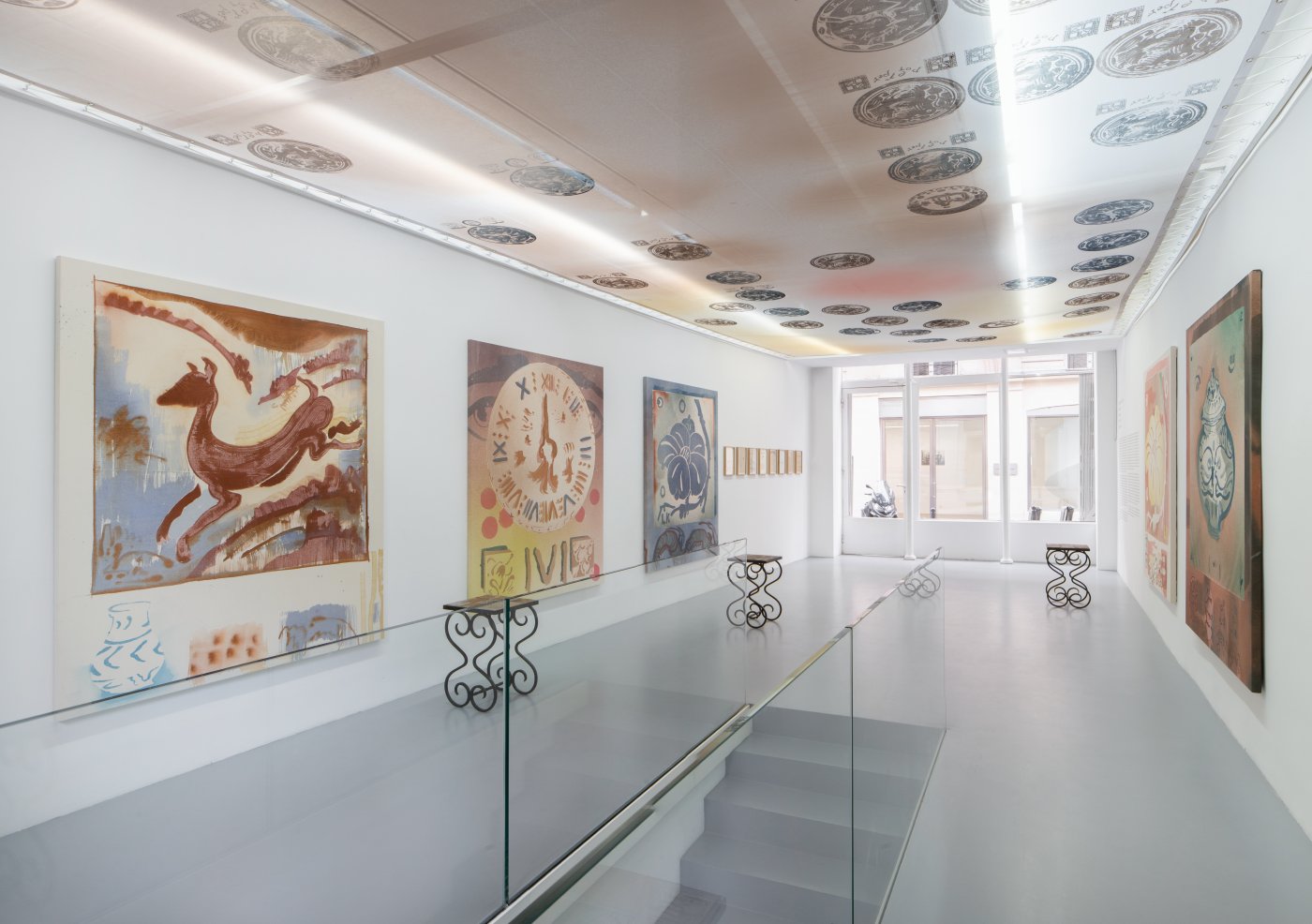 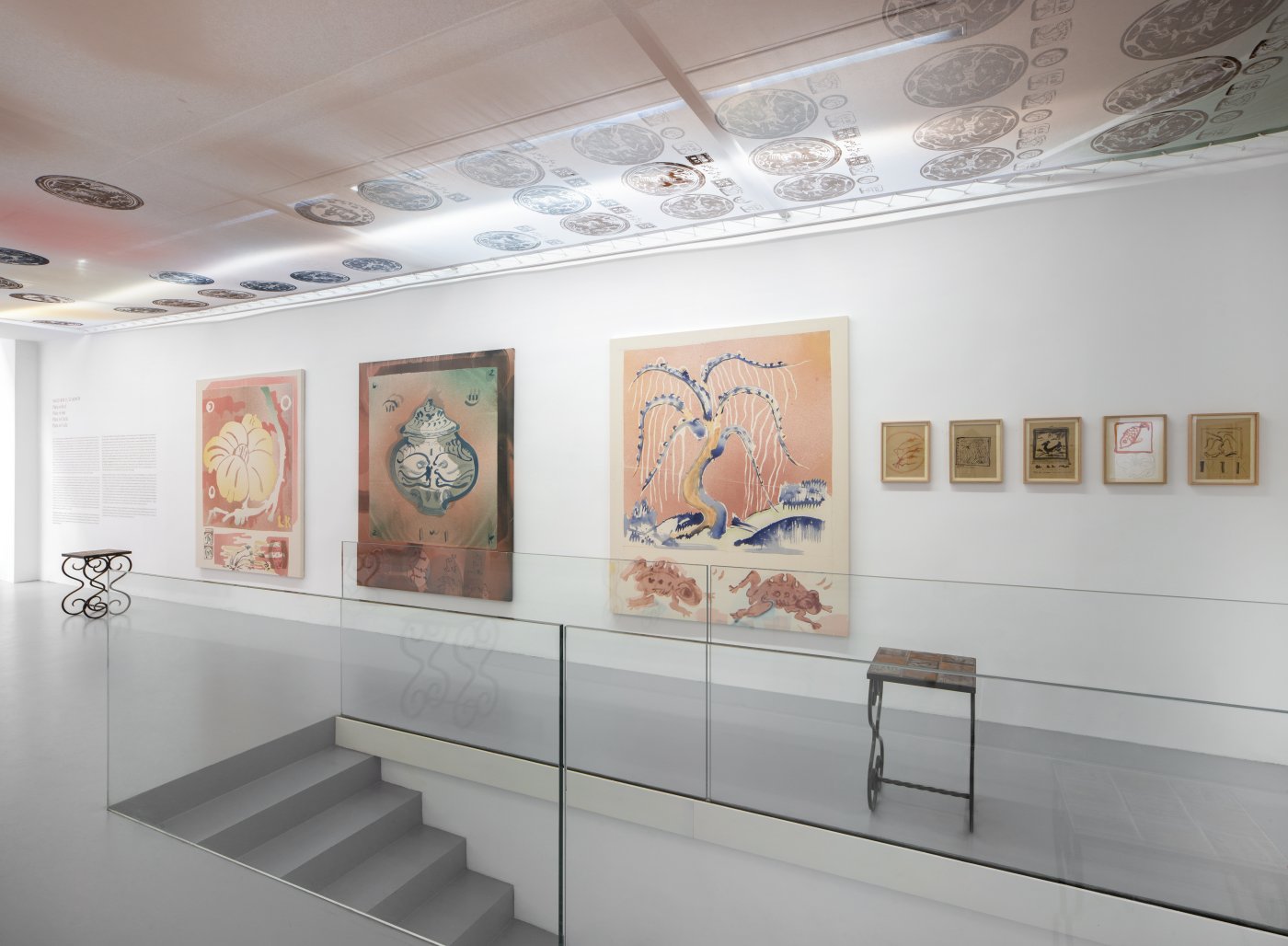 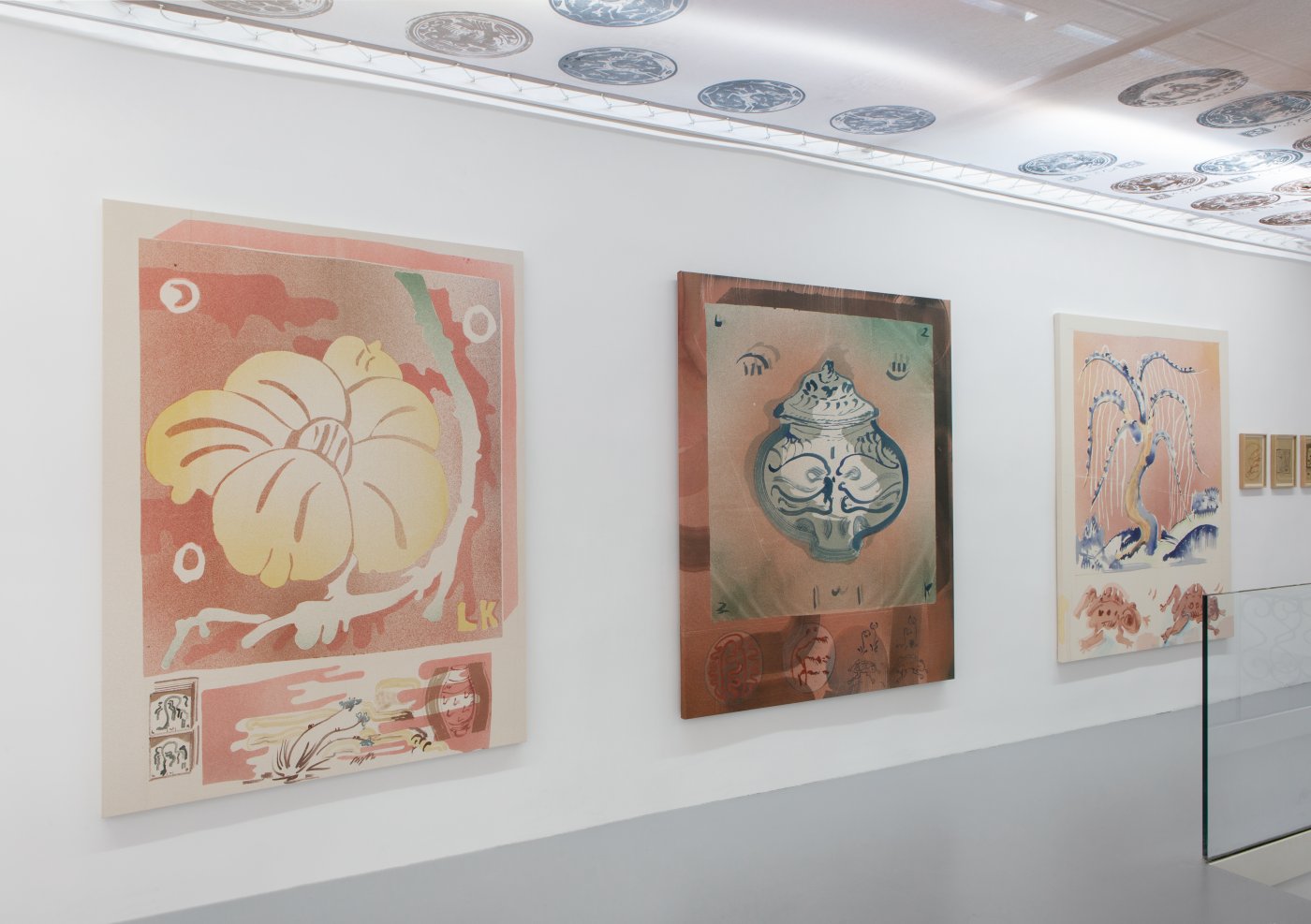 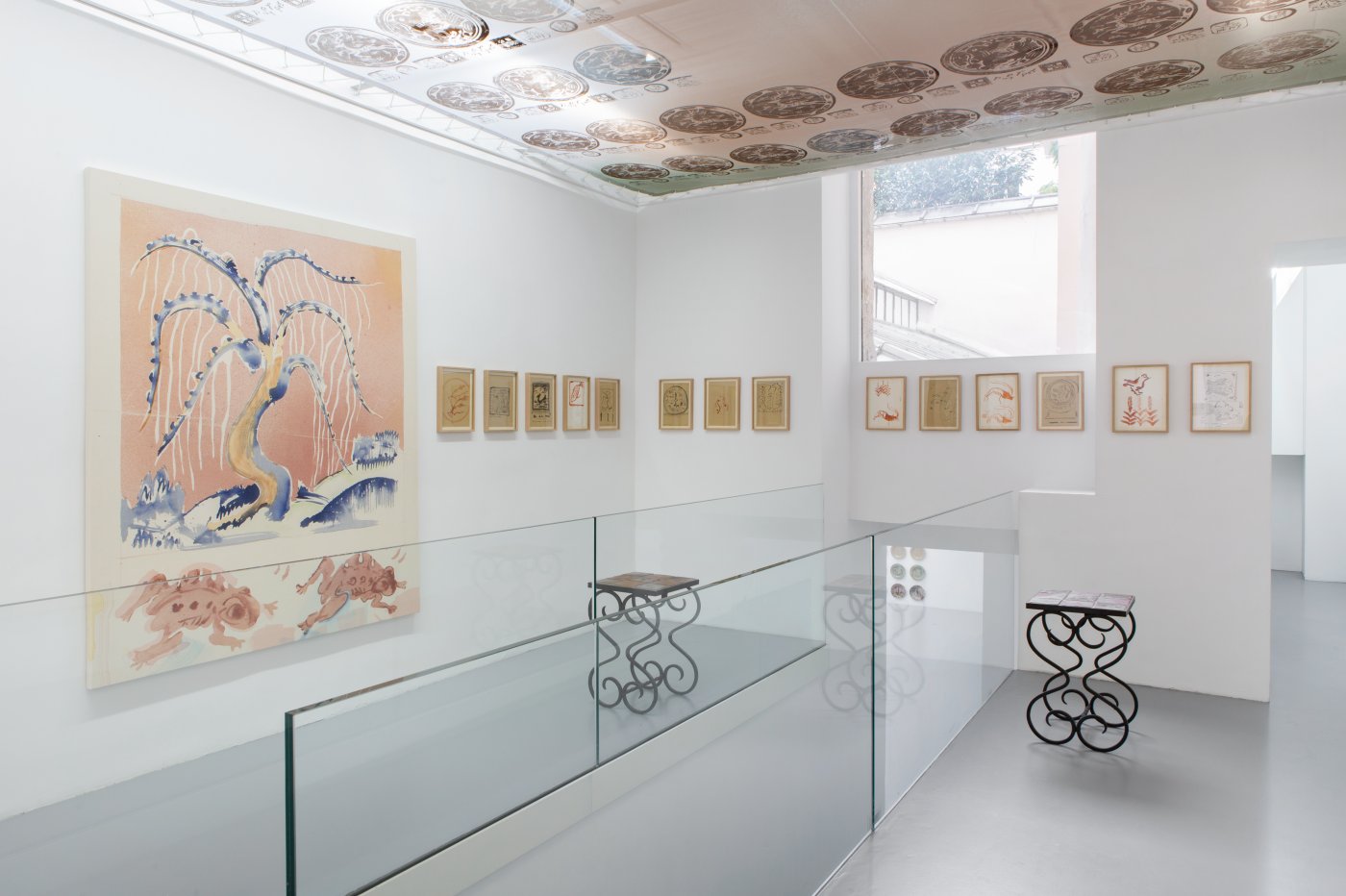 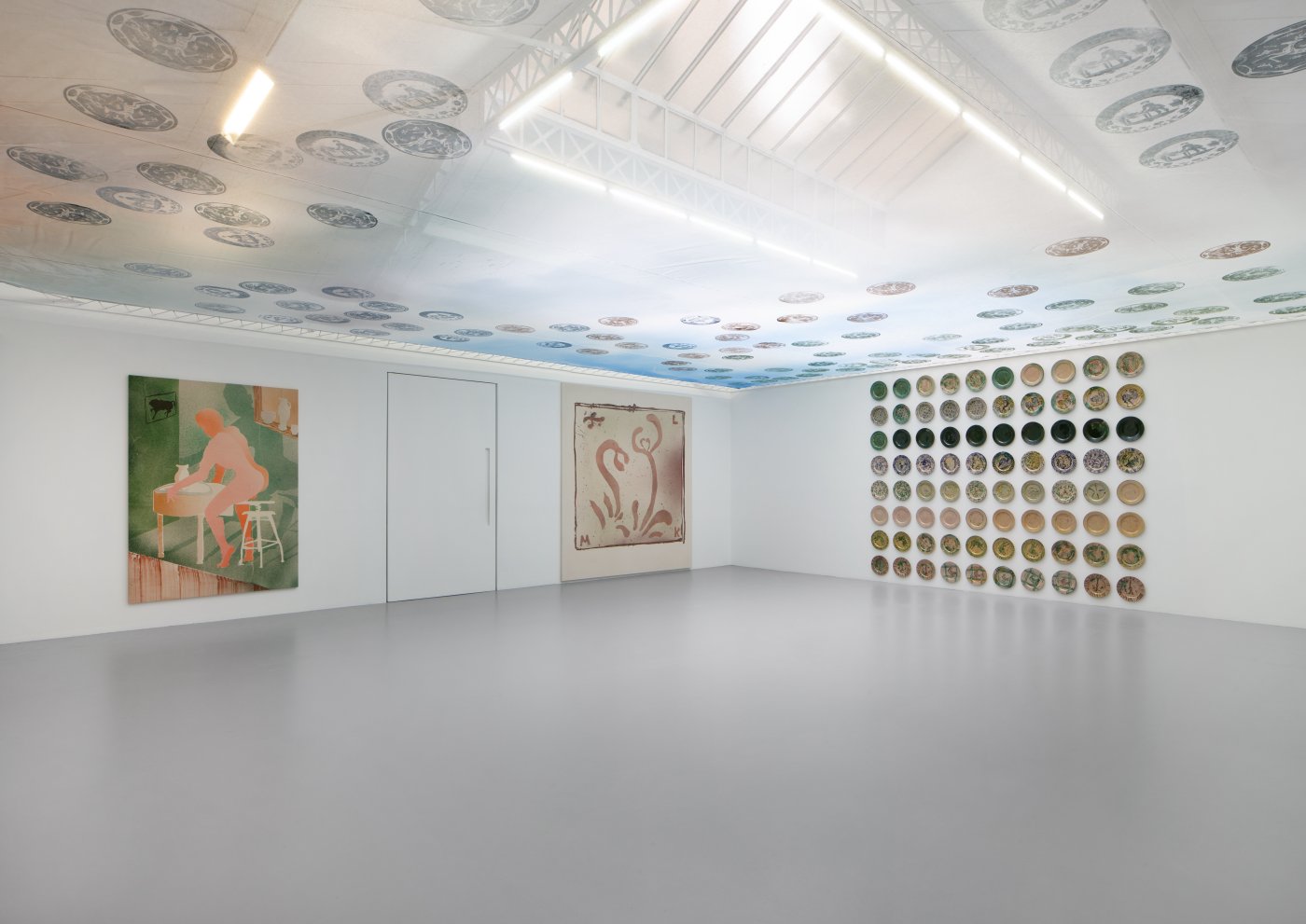 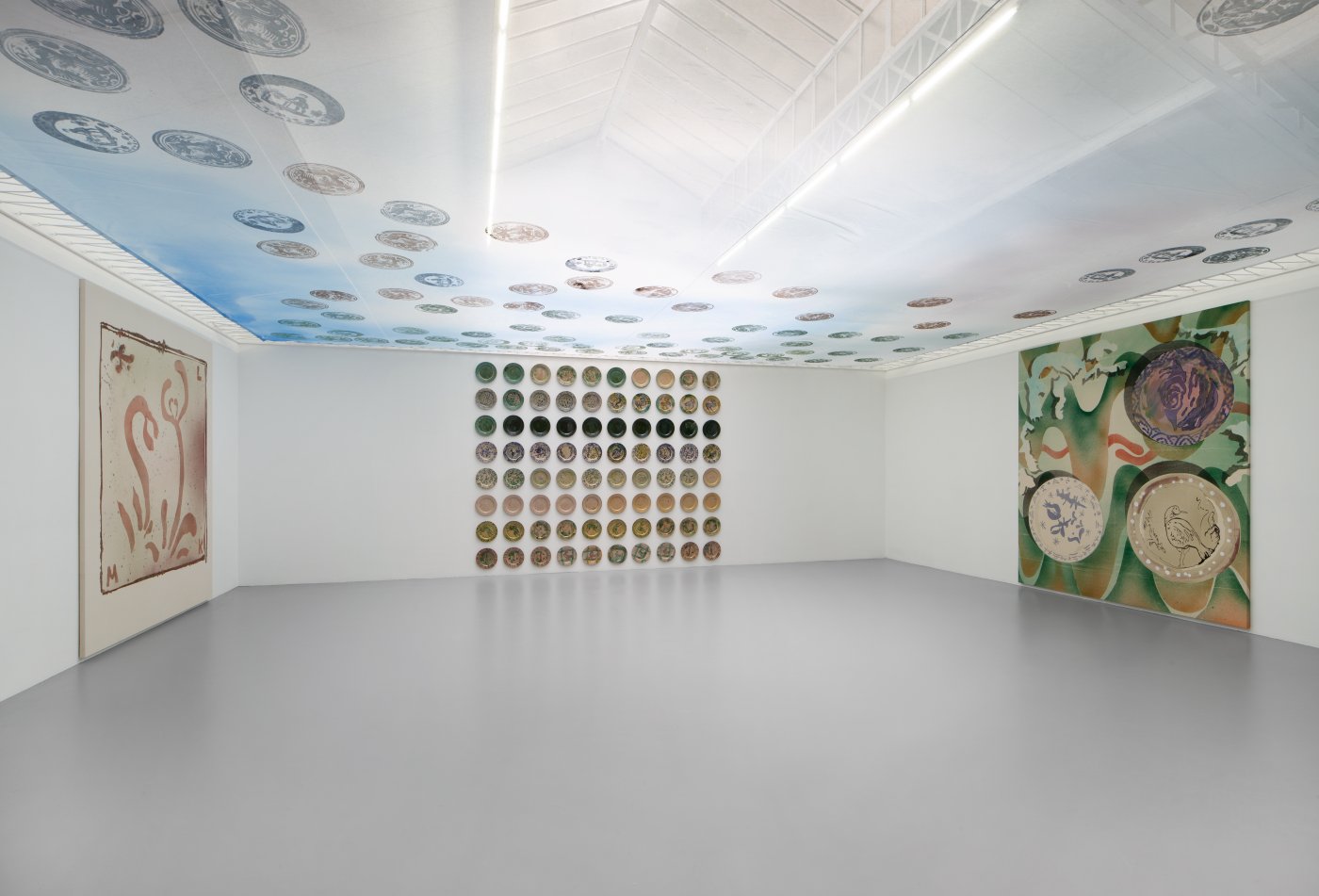 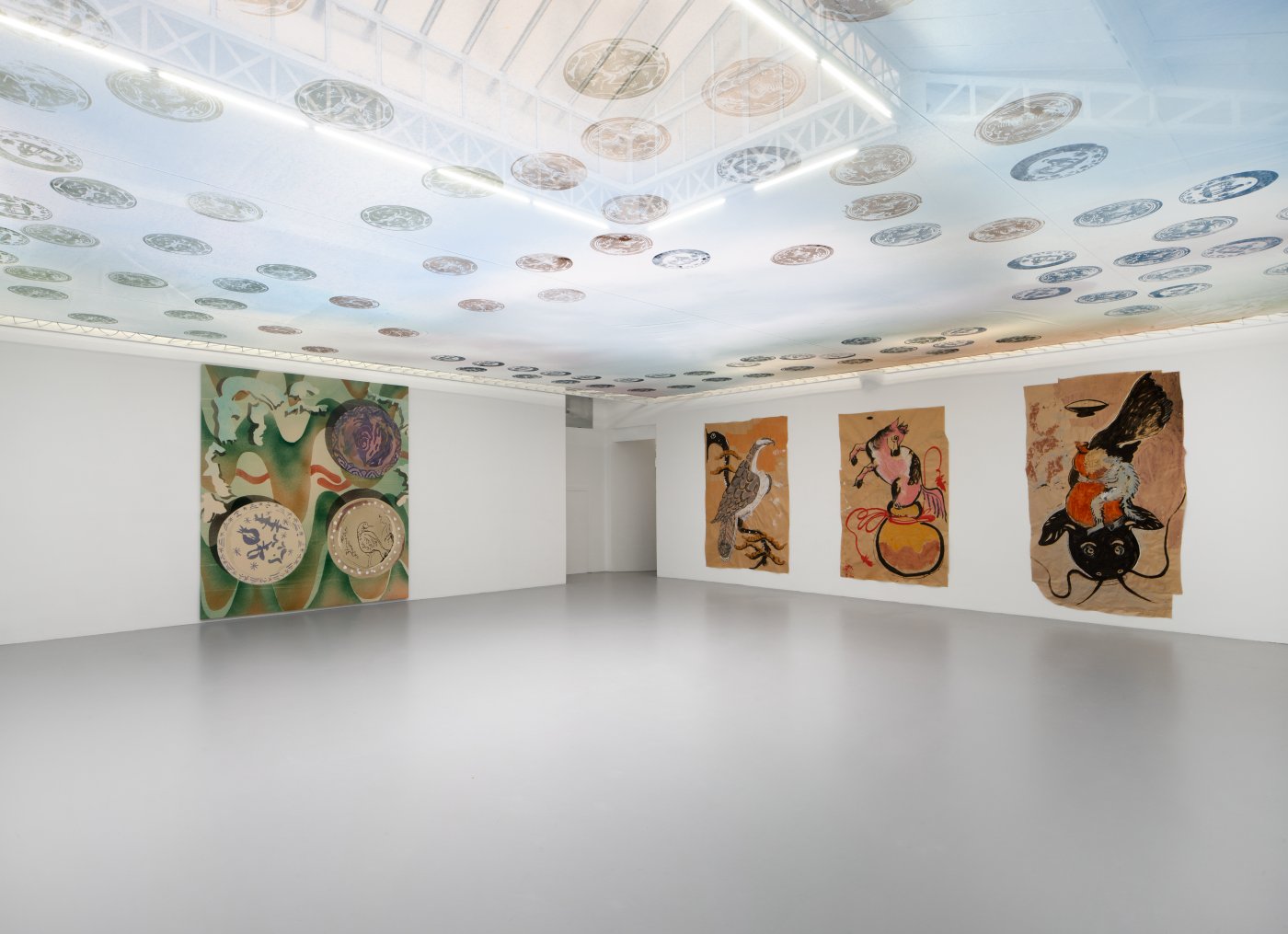 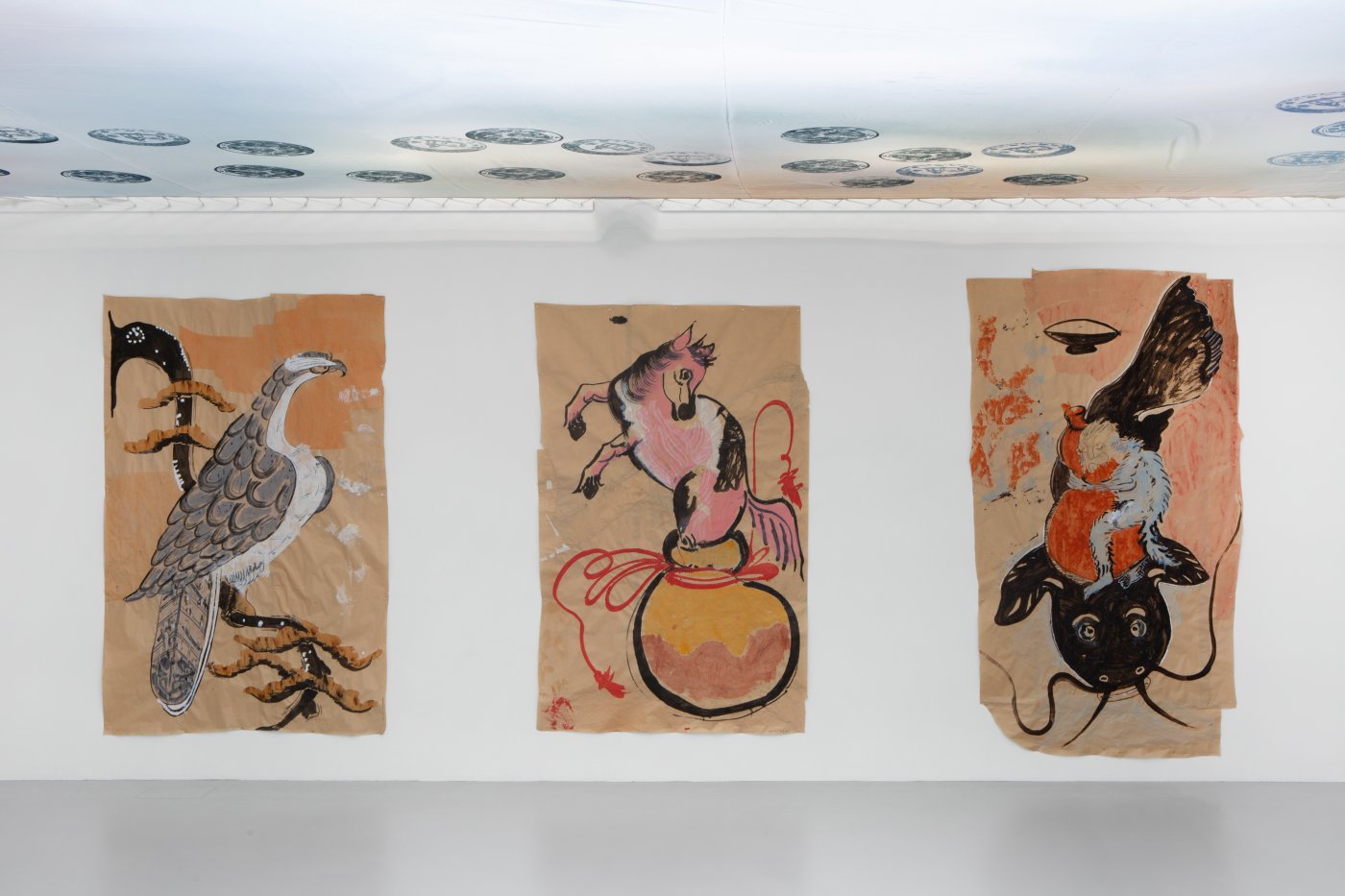 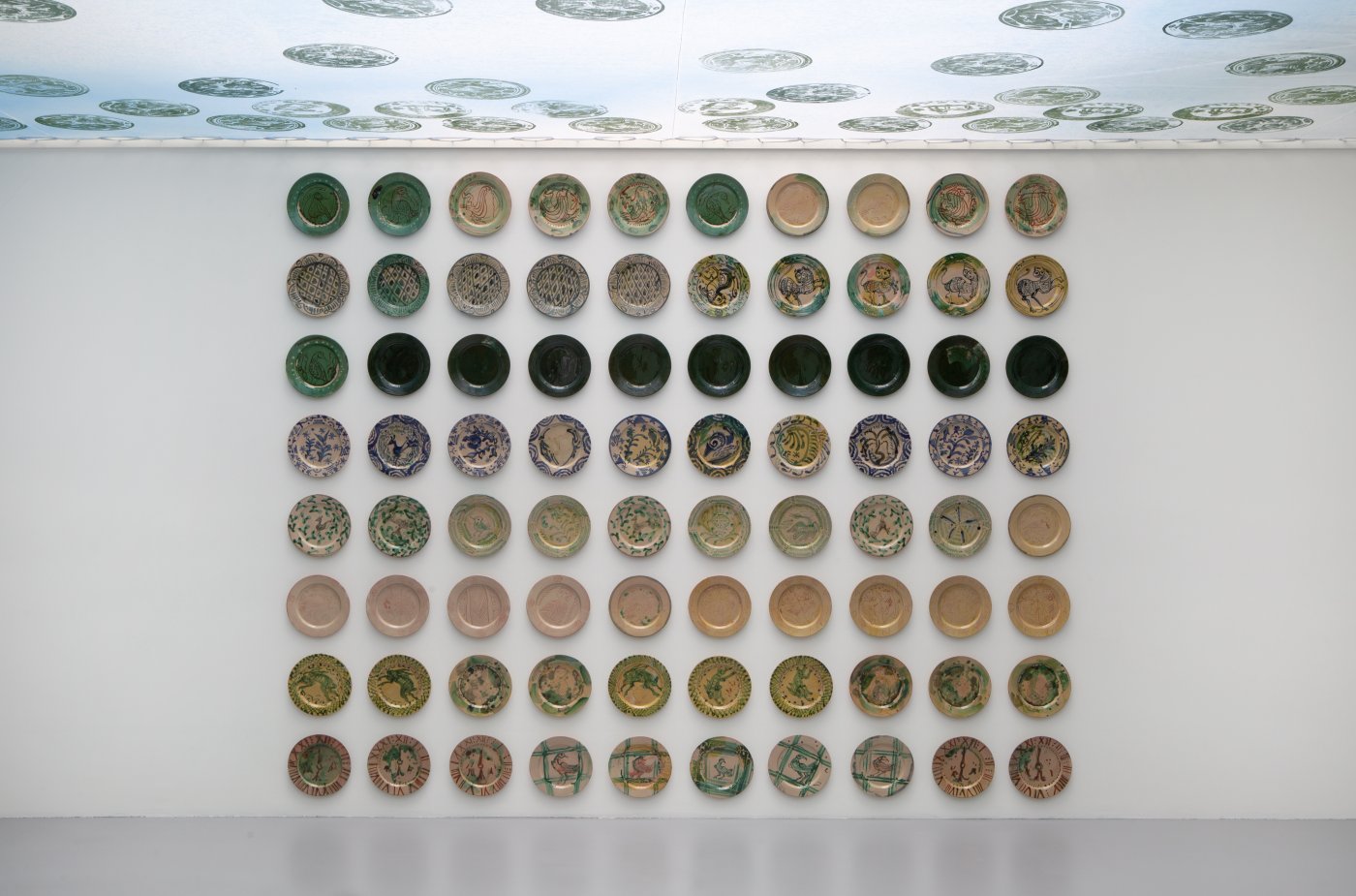 For his second exhibition at the gallery, Matthew Lutz-Kinoy has drawn his inspiration from the universe of Bernard Leach, a renowned English ceramist known for his friendship with the Japanese potter Shōji Hamada. Lutz-Kinoy has taken the circular form of the plate—the most common, universal, and quotidian of objects,—and combined it with Leach’s abstract and figurative patterns in order to explore the notions of cycle and repetition that give their tempo to all forms of life. As is often the case with Matthew Lutz-Kinoy, there are animals and plants but also Roman numerals arranged on the face of a clock, a recurrent motif in the English tradition of slipware, which Leach was a part of. The motifs form circles that run over large, liquid canvases and onto the surfaces of metal tables covered in ceramic tiles whose square shape is explored further on in a group of paintings. The motifs appear in a series of drawings inspired by the tradition of Japanese Otsu-E prints, and continue in a series of eighty plates hanging on the wall. The light in the space filters through two huge velum textiles suspended from the ceiling, enveloping the exhibition in an atmosphere of domesticity, a crucial dimension to the project. Here the home, a place of birth, death, and daily repetition represents the cycle of life. There is no beginning and no end, only life’s eternal return, symbolized by the circular form of the plate.

Matthew Lutz-Kinoy’s work is rooted in performance, which can be seen in his affiliation to its values, like the fluidity of movement, collective cooperation, and physical engagment. He makes use of painting and ceramics with equal ease in order to create arrangements in space that ask to be inhabited more than looked at. His work requires us to shift our expectations in a way that we are not used to with contemporary art. If we want to see it, we need to abandon our assumptions about heroic gestures, power, and autonomy and learn to consider notions of softness, joy, and pleasure. The artist turns our perspective inside out, purposively using forms and tools that are thought of as minor and inoffensive to create the possibility of transforming the role of art. We are so used to the brutality of modern ruptures that we have forgotten how to read the forms that attempt to retie connections between universes whose bond has been loosened, and to repair the wounds left by separation. The softness of his palette, the fluidity of his brush strokes, and the lightness of his compositions are means whose very seductiveness disturbs us.

Taking us off-balance, he guides us towards other more embodied, hybrid, and calm modes of existence. Ceramics, which unite aesthetics and use, has allowed forms and ideas to circulate peacefully between cultures. By paying homage to an exemplary friendship between two ceramicists and the way in which ceramics have been an essential tool of dialogue between distant cultures, Matthew Lutz- Kinoy inscribes his project within a process of appeasement that today rings more truly than any confrontation can.