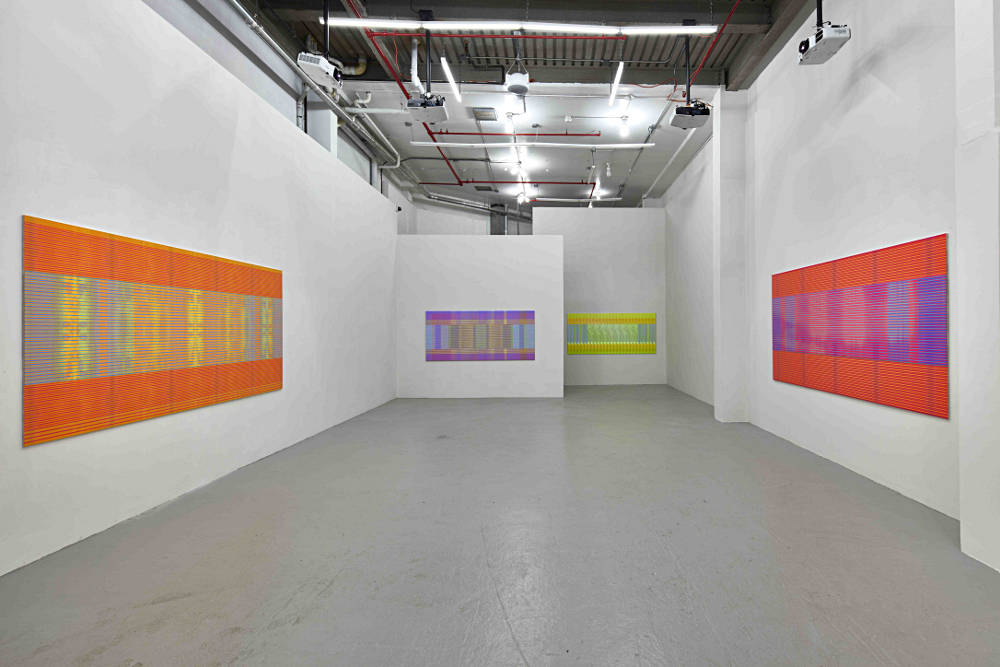 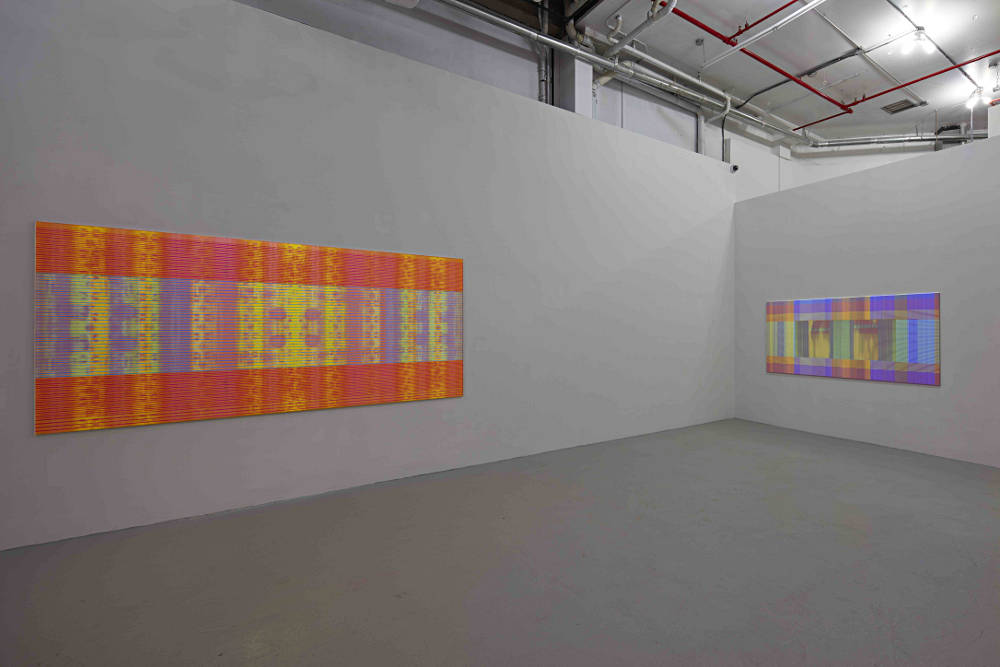 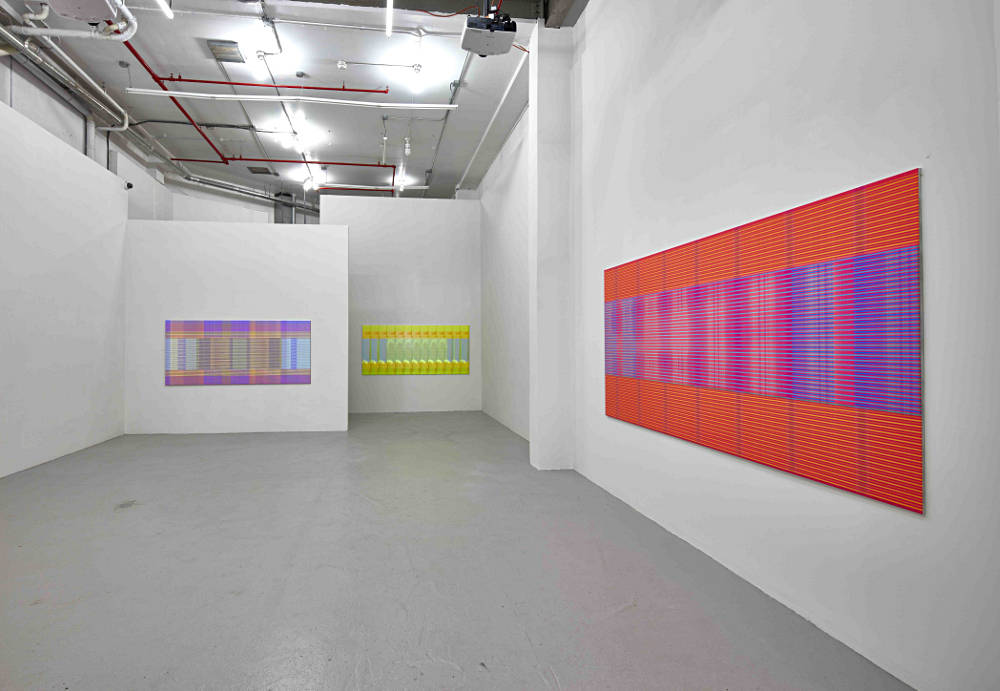 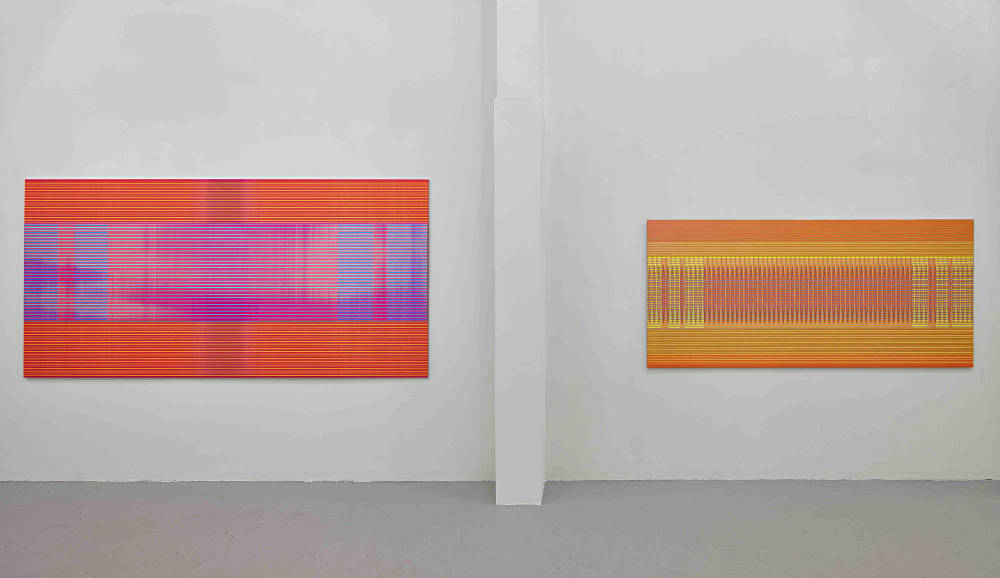 The slow-moving paintings of Matthew Kluber are hybrids, realized at the interface of two very differ media comprised of a bold geometric painting on an aluminum support and a unique digital projection onto that support. The digital imagery is generated from Kluber’s own computer programs that allow him to generate many layers of imagery and encode variables that make subtle shifts and changes in the speed, direction, duration and length of various segments while maintaining the controlled program, compositional elements and color palettes. The result is a hypnotic, kinetic and perceptual experience that never ends, slowly evolving and morphing from one image to the next. The projection is not a video nor a repeating loop, it is continuously generated directly from Kluber’s custom software. Another great feature of this work is that when the projection is switched off via remote control, then a stunning geometric painting remains prominently on the wall. In addition to two new projections and custom imagery, Kluber is debuting a new larger format measuring five feet tall by 10 feet wide.

Kluber’s work reads like a compression of post-1960s abstraction. References include color theory and Color Field painting with early influences of Kenneth Noland, Morris Louis and Gene Davis and their use of subtractive color. There are clearly references to the Light and Space movement with inspiration from the transformational work of Robert Irwin, James Turrell and Dan Flavin and their exploration of additive color from diverse light sources. Together, the two historical movements noted above also echo an important feature of art that emerged during the 1960s and 70s – a combination of traditional artmaking (canvas and pigment) with technology (electricity, light and new materials as supports) as well as new concepts of what constitutes art (transforming a space with light). Kluber also references the intense exploration of visual perception and optical art with the trippy patterns and migrations of forms and color across his paintings like a light show.

About Matthew Kluber:
Kluber received his BFA from the Rhode Island School of Design and his MFA from the University of Iowa. His thirty-year career has seen his work exhibited in galleries and museums from New York to Shanghai. His work can be found in public and private collections including The Austin Museum of Art, the Des Moines Art Center, the Portland Art Museum, the Figge Art Museum and the Thoma Art Foundation in Chicago, among others.