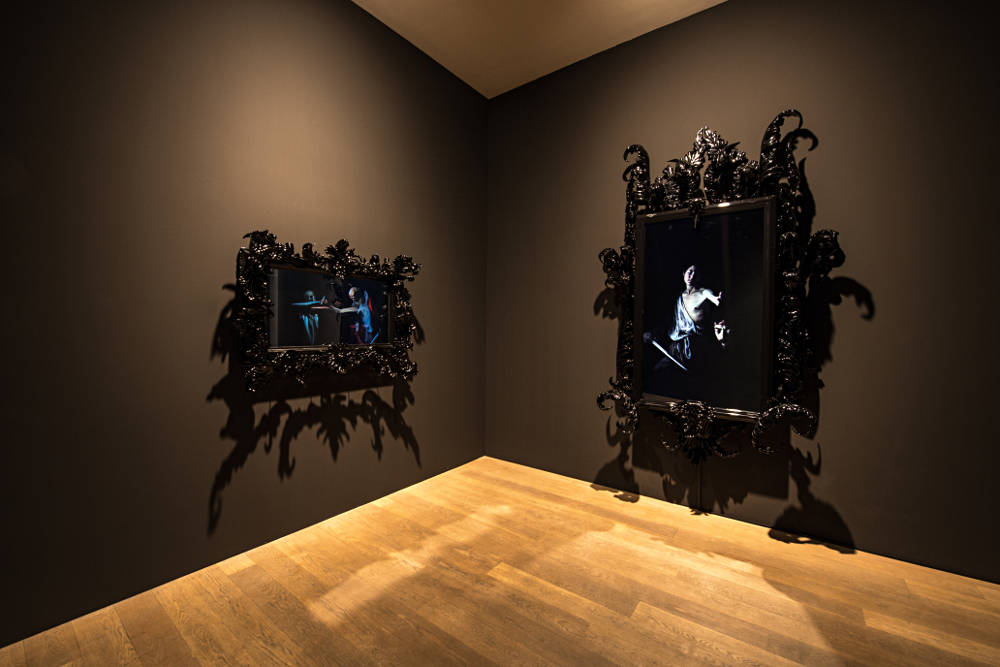 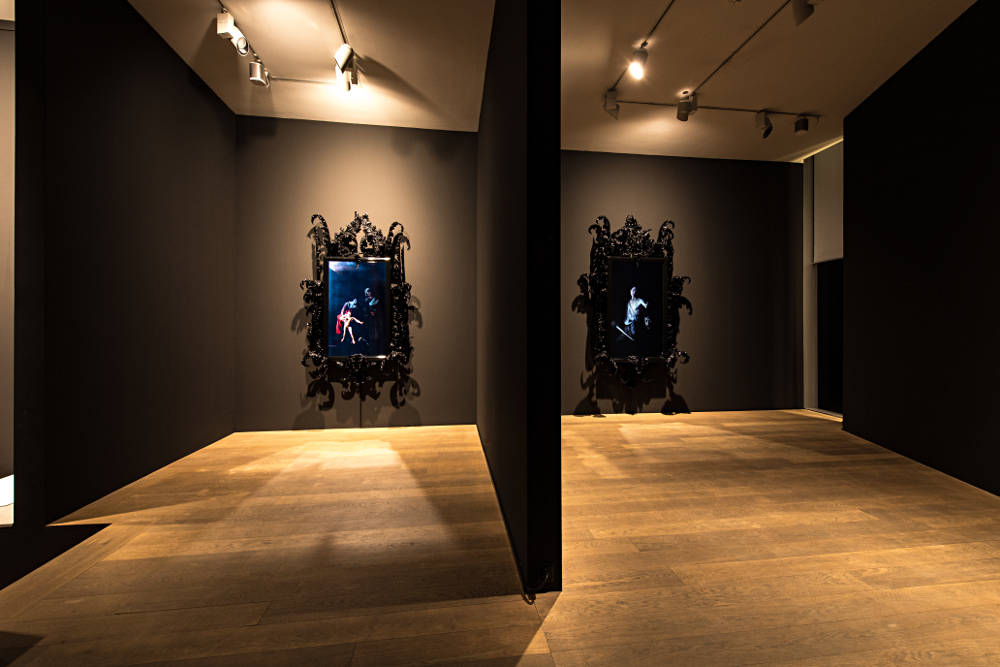 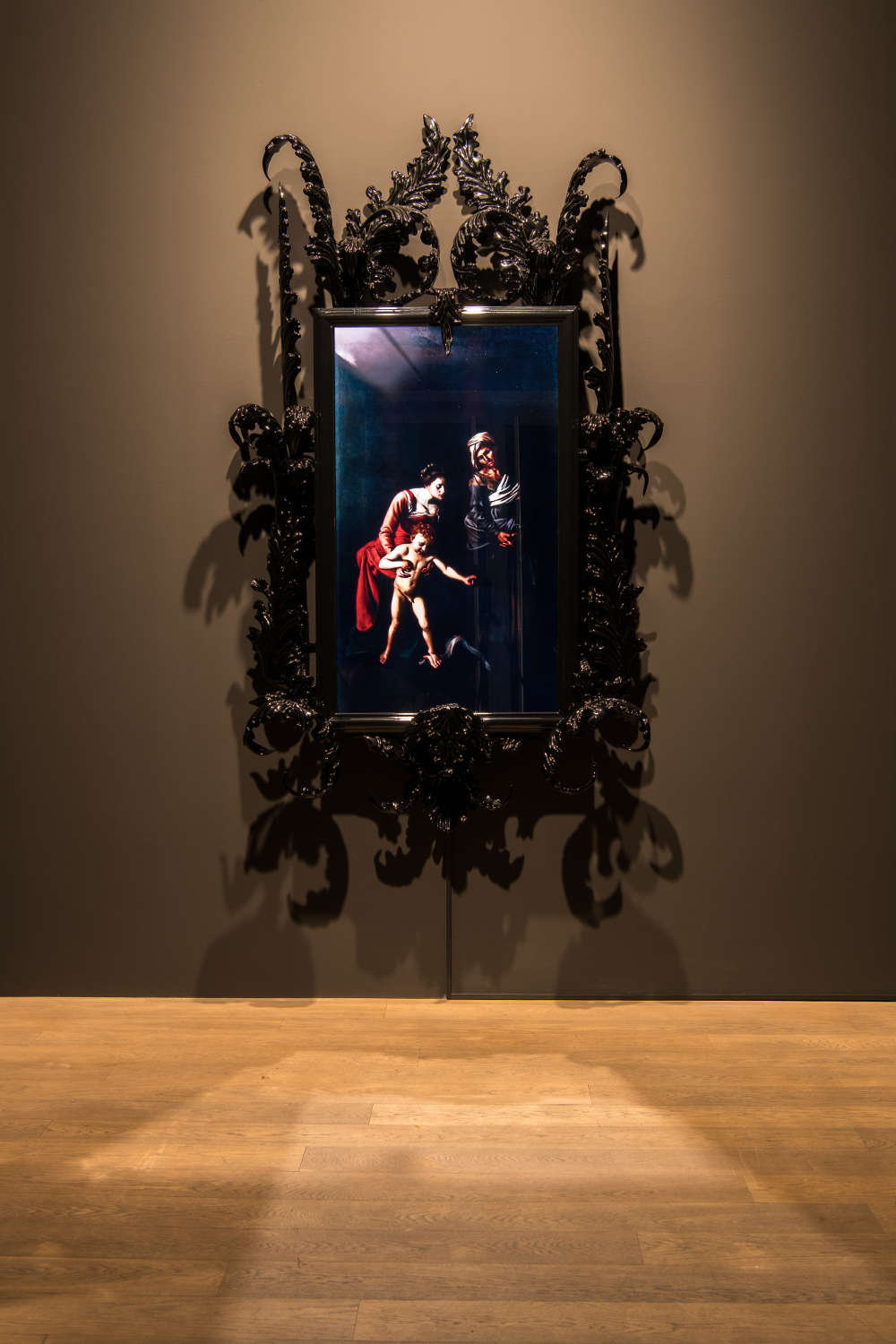 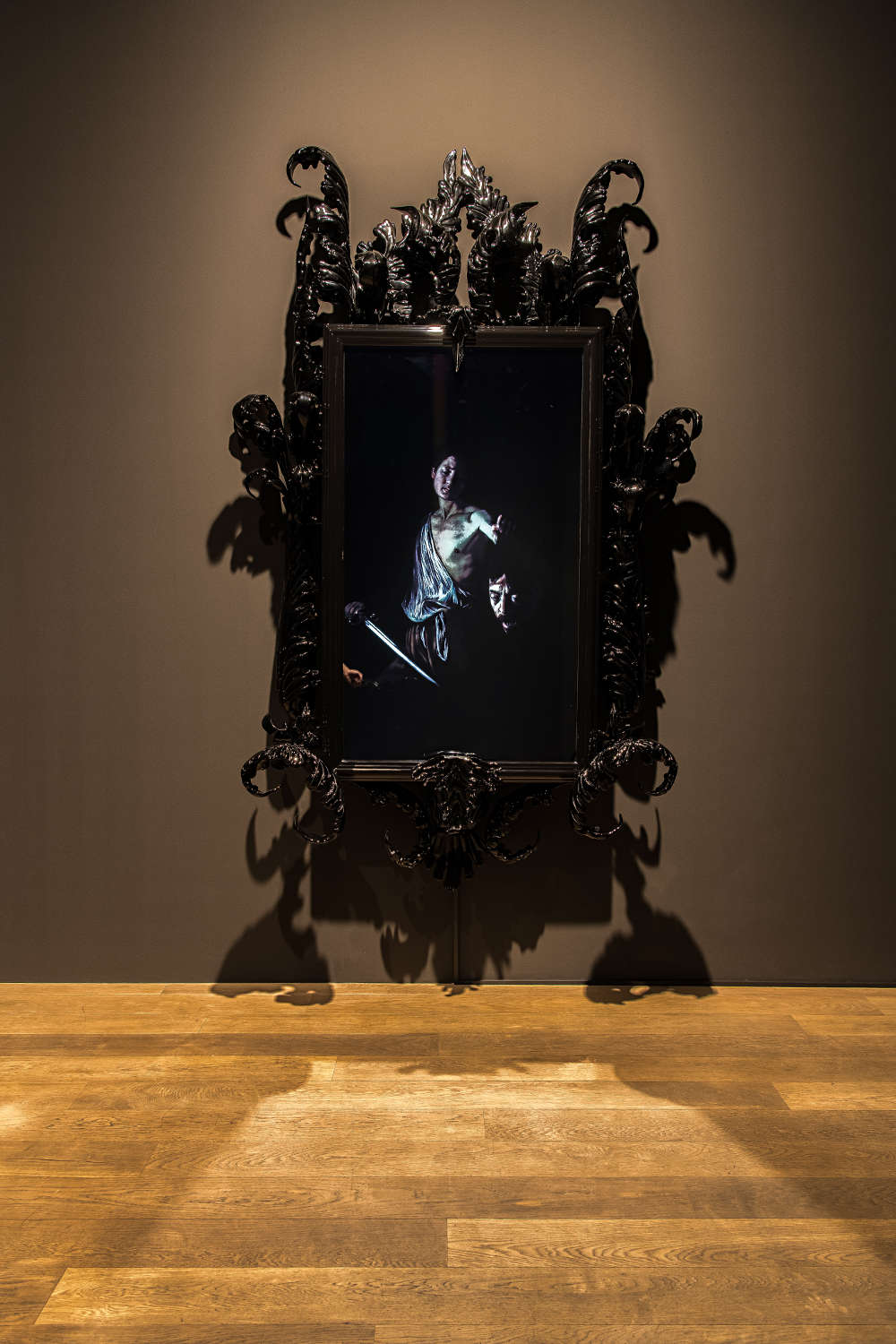 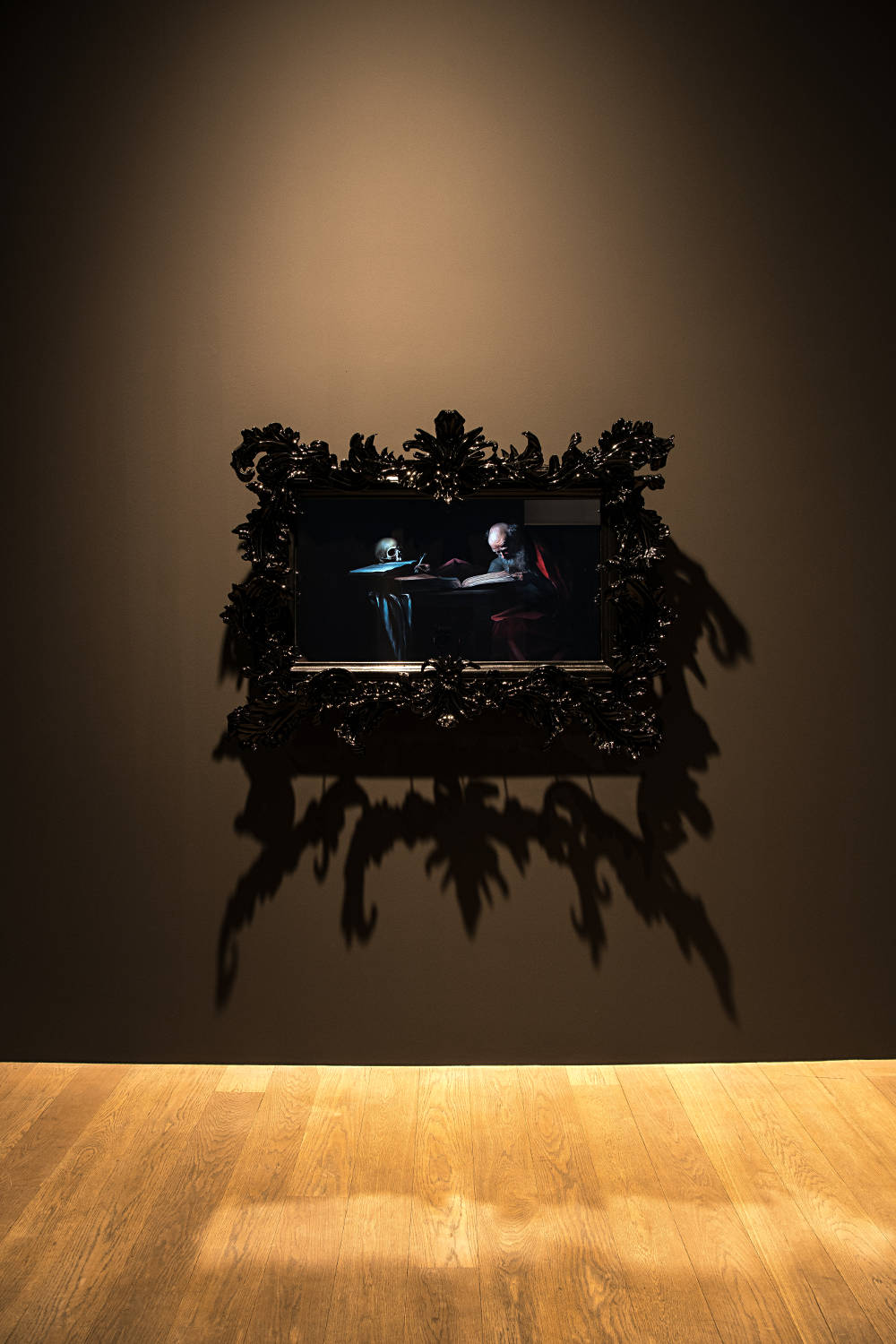 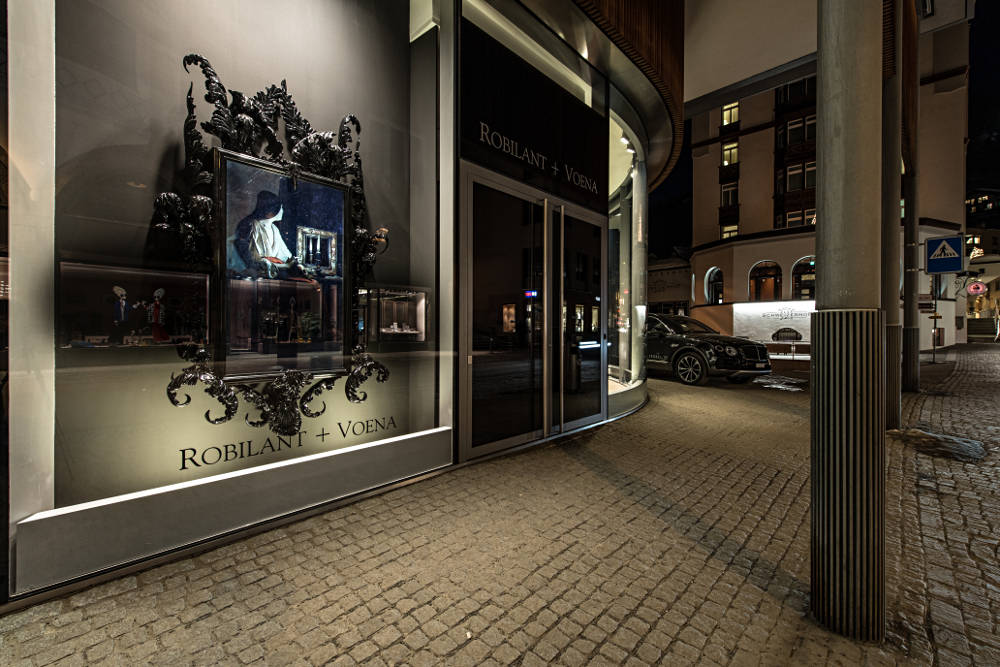 Three of the works were conceived by Collishaw for the 2014/2015 exhibition Black Mirror at the Galleria Borghese, Rome. The exhibition was curated by the director of the Galleria Borghese, Anna Coliva, together with curator Valentina Ciarallo and engaged Collishaw’s works with paintings by Caravaggio in the Galleria’s permanent collection. Robilant+Voena, a gallery that specializes in old and modern masters, has long-established themselves as experts in Caravaggesque art.

It is not surprising that Collishaw, an artist recognized for his candid approach to the grim realities of life and death, chose to dialogue with the paintings of Caravaggio (1571-1610), who was a revolutionary master of Baroque painting known for using live models, creating dramatic effects through the contrast of dark with light, and manifesting powerful, often gut-wrenching, narratives.

Collishaw has been inspired by Caravaggio throughout his artistic career and is convinced of Caravaggio’s continued relevancy. He explains that in these works, “I wanted to go back to the moment when Caravaggio was immortalizing the humble models in front of him – turning them from living, breathing human beings into icons of Western painting.” Moreover, Collishaw found that Caravaggio’s dark backgrounds and single light sources, were especially conducive to achieving his desired effect.

Night Hunter at Robilant + Voena consists of four ornate Murano-glass picture frames encasing dark silver, two-way mirrors, which reflect the viewer and their surroundings. Between the mirrors Collishaw has created a purgatory-like space where the figures in the paintings appear to move like apparitions. Three are inspired by Caravaggio’s paintings from the Galleria Borghese exhibition: the Madonna dei Palafrenieri (1605/6), St. Jerome (1606), and David with the Head of Goliath (1606). The fourth work is based on a painting by Caravaggio’s greatest French follower, Georges de La Tour (1593-1653), in the collection of the Metropolitan Museum of Art: The Penitent Magdalene (ca. 1604). According to Collishaw what emerges “from behind the mirror is this shimmering image of a man or a woman holding a slightly jittery pose, a chimerical spirit-presence coming back to haunt you through the mirror.”

Collishaw believes that Caravaggio is “one of those artists you don’t need to read about and study because, as a painter, he’s so visceral: he just hits you right there,” he explains. “When Caravaggio was painting, the common people weren’t going to church looking for lessons in aesthetics and art history. They just wanted a relationship with God. And Caravaggio gave it to them in a language they could understand. He’s so brutally real. He doesn’t embellish or decorate things, but gives you life as it is – with dirty feet right in your face.”

Collishaw’s works are both reflections of the instinctual human attraction to images of mortality or death and are studies in manipulating the viewer’s experience. Like Caravaggio, Collishaw achieves dramatic engagement with the viewer in his art, but Collishaw has siezed the emotive opportunities presented by modern technology.

Courtesy of the artist and Robilant + Voena