There’s always sound that enters when I’m thinking about a painting. To me they have sound.
—Mary Weatherford

Gagosian presents Train Yards, an exhibition of paintings by Mary Weatherford. This is her first solo exhibition with the gallery in London. 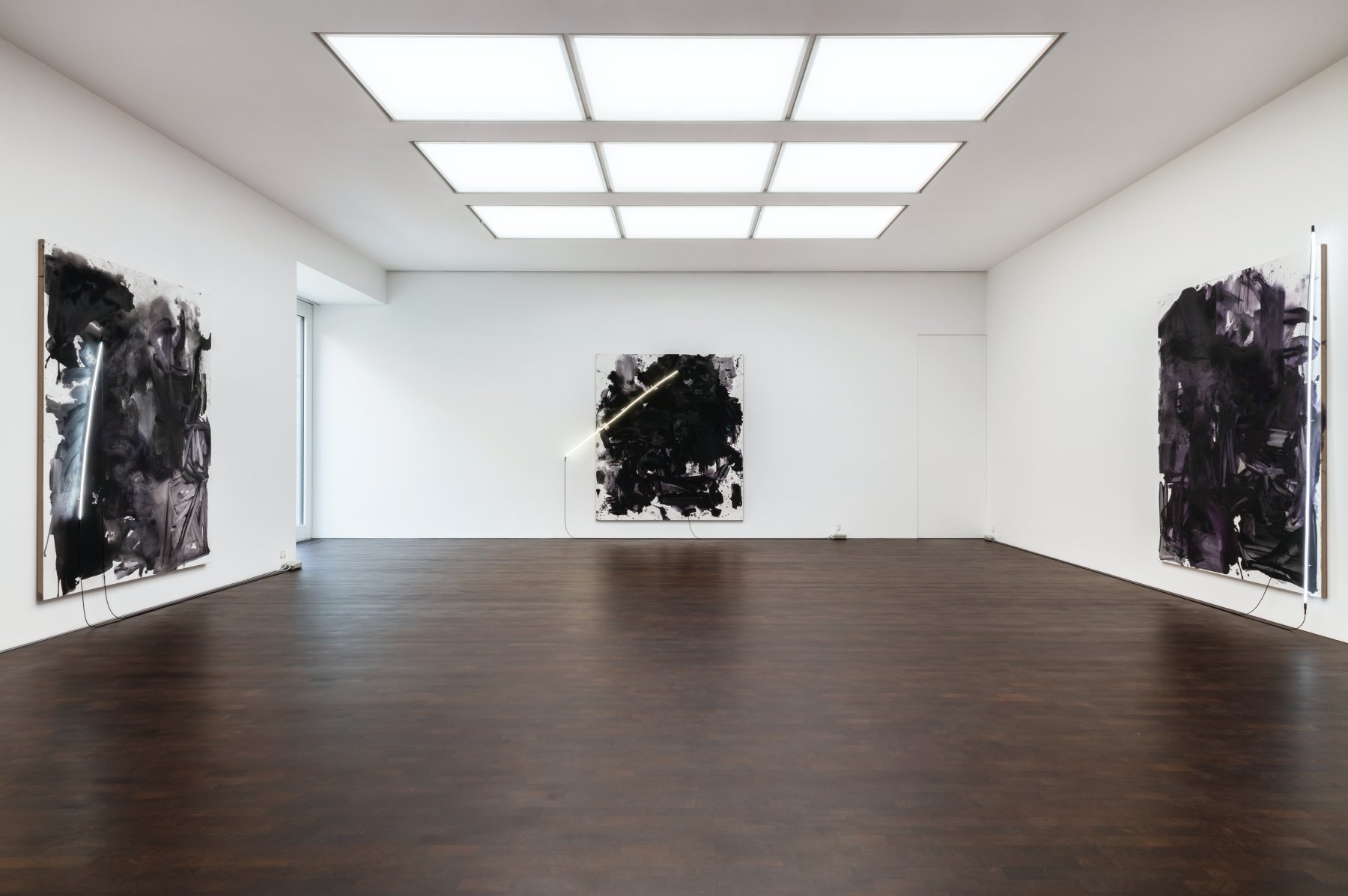 Weatherford roots abstract painting in subjective experience, evoking urban and rural environments while experimenting with internal painterly dynamics around light, color, and gesture, as well as the relationship between a painted surface and various three-dimensional addenda. Preparing each canvas with a mixture of gesso and marble dust, she conjures a wide range of chromatic and textural effects. In her best-known works, sponged grounds of vinyl-based emulsion on heavy linen panels are surmounted by one or more carefully shaped and placed colored neon tubes.

Weatherford began using neon in 2012, inspired by the illuminated signs that lined the streets of Bakersfield, California, where she was then working as a visiting artist and educator. Casting an intense industrial light onto the modulated fields of color beneath them, the tubes (which sometimes extend beyond the edges of the painting) read as hand-drawn lines, their trailing power cords adding a further graphic and dimensional aspect.

Making frequent reference to specific locations and climates, Weatherford’s paintings of the 1990s and early 2000s incorporate assemblage elements such as seashells, sponges, and starfish. The vines series (2004–08) is inspired by intertwined networks of ivy, and the caves series (2006–14) is based on her observations of natural light at a Pismo Beach sea cave. Since the start of her career, she has sourced inspiration from the use of commonplace and organic materials identified with Arte Povera, and from American abstract painters of the 1950s and 1960s such as Helen Frankenthaler, Morris Louis, and Kenneth Noland, building upon and challenging the high modernist flatness that they extolled by imbuing her own paintings with the illusion of spatial depth and a romantic spirit of existential inquiry.

Following series inspired by Manhattan, Los Angeles, New York Harbor, and the industrial port of Red Hook in Brooklyn, the Train Yard series (2016–20) featured in this exhibition also pursues Weatherford’s foundational interest in the poetics of place—especially sites of mass transportation, and locations where the conditions of urban life reveal themselves with especial intensity. She has described these large-scale canvases—abstracted interpretations of the titular site after dark, in which irregular gaps in the works’ deep purple and black grounds evoke flashes and flickers of white light—as visual embodiments of environmental noise: “the clanging of bells and whistles and the sound of trains.” Also painted in vinyl emulsion on linen, the Train Yard paintings incorporate white neon light tubes that evoke the singular—and distinctly American—history and aura of their subject.