Mary Ramsden: The bag of stars

Mary Ramsden: The bag of stars 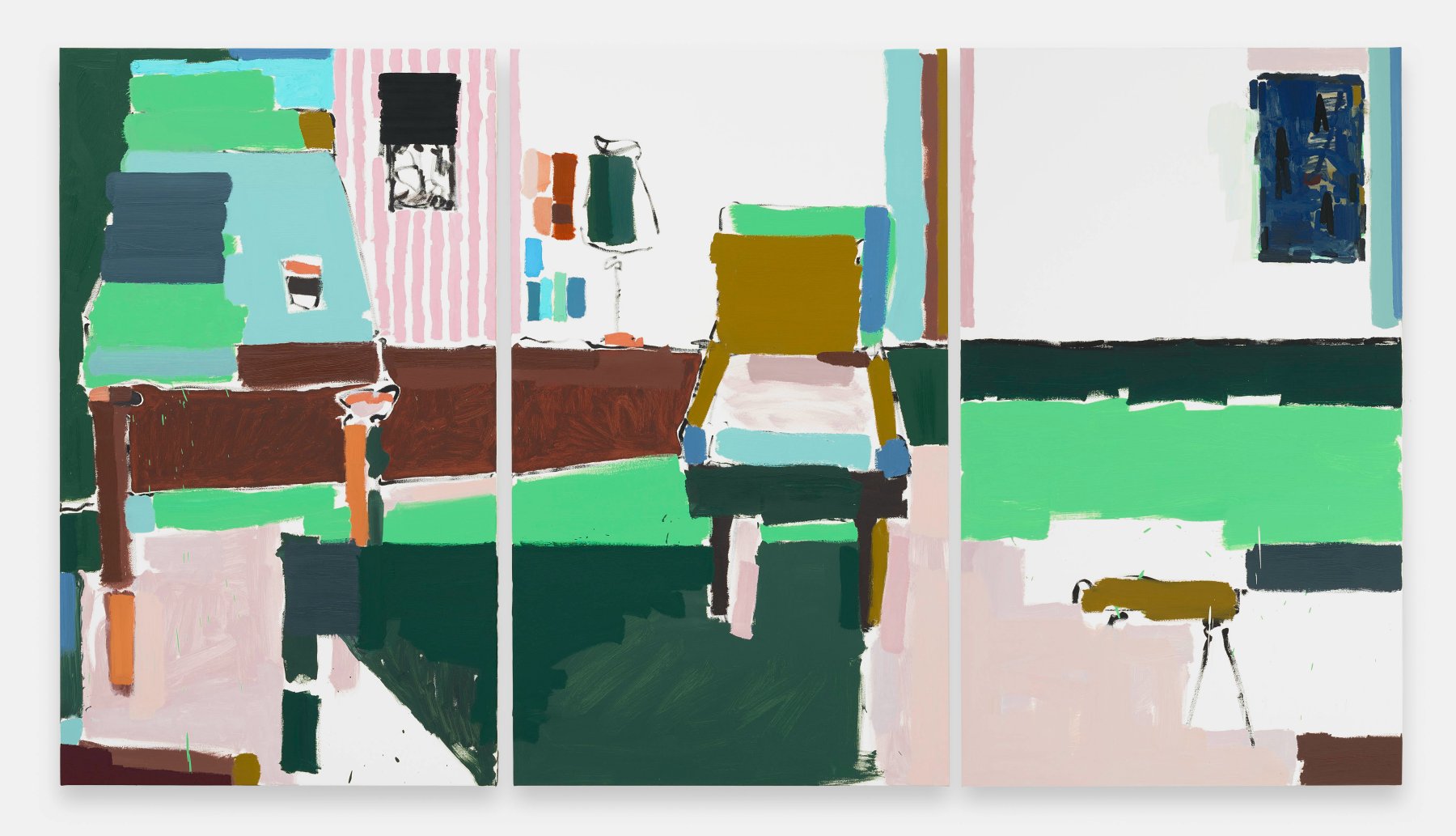 In 1921 Virginia Woolf published the story A Haunted House. The two-page narrative was a far more poetic, modernist take on the supernatural yarns that were a craze in the late 19th century. Woolf’s tale of a ghostly couple coexisting in a house can equally be read as a story about presence and absence, relationship and connection. It is also a story about architectural space. “Whatever hour you woke there was a door shutting,” she wrote. “Safe, safe, safe” the pulse of the house beat softly. “The treasure buried; the room…” the pulse stopped short.” Mary Ramsden’s new paintings have a similar take on the interior. A dramatic departure from the abstract works she emerged with, these are canvases that explore the relationship between the human and object, the viewer and painting, external space and internal experience.

The works vary in scale and some of the larger paintings take shape as diptychs and triptychs that echo the scale of a room, the size of the human. We as viewers appear to sit at the end of the tables and rooms she depicts. They follow on from her intimate portrait series, her first investigation of the figurative which depicted individuals on the same scale as Byzantine icons. Here, however, the subject matter is less fixed. Ramsden addresses the idea of memory of place. The proxy objects and pseudo-spaces we look at are in no way based on reality and emerge from the artist’s mind. The works echo lines from Lynne Tillman’s 2009 essay Save Me From The Pious And The Vengeful, which the artist namechecks as a reference. “The world is made up of imagining. I imagine this, too. Things circle, all is flutter. Things fall down and rise up,” Tillman writes.

Ramsden’s works emerge from the history of still life painting. Yet these are very much rendered in an abstract language. There is a tension between figurative grounding and abstract nuance. To quote Tillman again, “Out of nothing comes language and out of language comes nothing and everything. Everything challenges the tenuous world order.” This is the first time the artist has addressed the object, and as a result her relationship to things is complex. There are moments where she touches on the representational, but all is unclear. There are forms that resemble tables, almost vases, maybe laptops. Nothing is spatially accurate.

The intentional illegibility in the pieces reflects her interest in a viral meme – an AI amalgam of interior stock images. The public response to this indecipherable image was often anger. An indignation at the lack of comfort that perception creates. That rage at not being able to read a picture is an interesting reflection of feelings about abstraction in a wider sense. The anger of not understanding.

The artist’s works subject matter and stylistic approach reflect the influence of late 19th century French art in particular. Items seem to spill out of the canvas – a subconscious reference to Cezanne’s approach to still life where tables morph and grow as they near the viewer’s gaze. She discusses her approach to mark making and colour as strongly influenced by Édouard Vuillard and the Nabis school. Like Vuillard, Denis and Valloton, Ramsden is attracted to flat swathes of vibrant colour. In her case this is a focus on rich acid yellows, pale pink and blocks of aquamarine and sea green.

Another visual reference is Matisse, in particular his ongoing inclusion of paintings within his paintings. In many of his interiors, he would create vibrant depictions of modernist paintings themselves. Ramsden was drawn to their casual and loose approach and knowing humour. But they also ground her works. They become rectangular objects that the legibility or the meaning of a piece works around. They raise ideas around pattern, surface, flatness and depth. Her ‘paintings within paintings’ are always straight on and face the viewer, disorientating and leading the eye around the composition.

Creating interiors as a female artist raises a knowing nod to the ideas around feminism and domesticity. Yet Ramsden’s interiors feel more functional. These are working spaces. For the artist this is reflective of Ursula K. Le Guin’s The Carrier Bag Theory of Fiction. Le Guin aimed to redefine narrative away from the heroic but something about existence in a different way. “I would go so far as to say that the natural, proper, fitting shape of the novel might be that of a sack, a bag,” Le Guin wrote. “A book holds words. Words hold things. They bear meanings. A novel is a medicine bundle, holding things in a particular, powerful relation to one another and to us.” Ramsden’s paintings work with the same approach. This is narrative but not about power struggle or aggression. Her compositions are about nuance, interior dialogue, the quiet drama of everyday experience.

There is an ambiguity in Ramsden’s painting. The human is embedded in her paintings but not clearly depicted. Personlike forms are occasional ghostlike presences. They inhabit ambiguous spaces. It is an interesting extension of the trope of gothic architecture, yet instead of dark haunting narratives we instead as viewers are forced to look at how these spaces resonate in our own memories. We have to work out our relationship to the room, and with abstraction itself.