In accordance with recent government guidance, the gallery is temporarily closed until 28 February. Launching online from 6 February 2021. 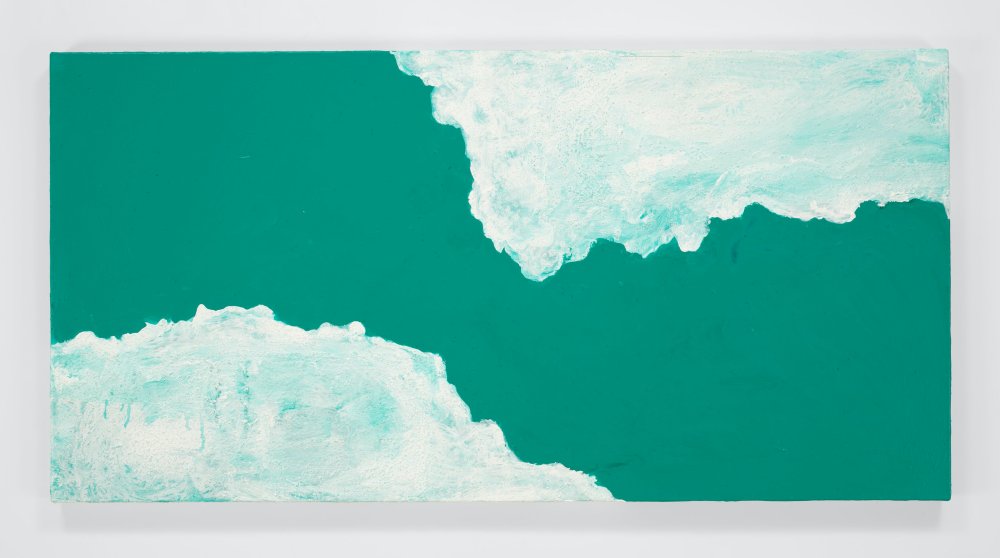 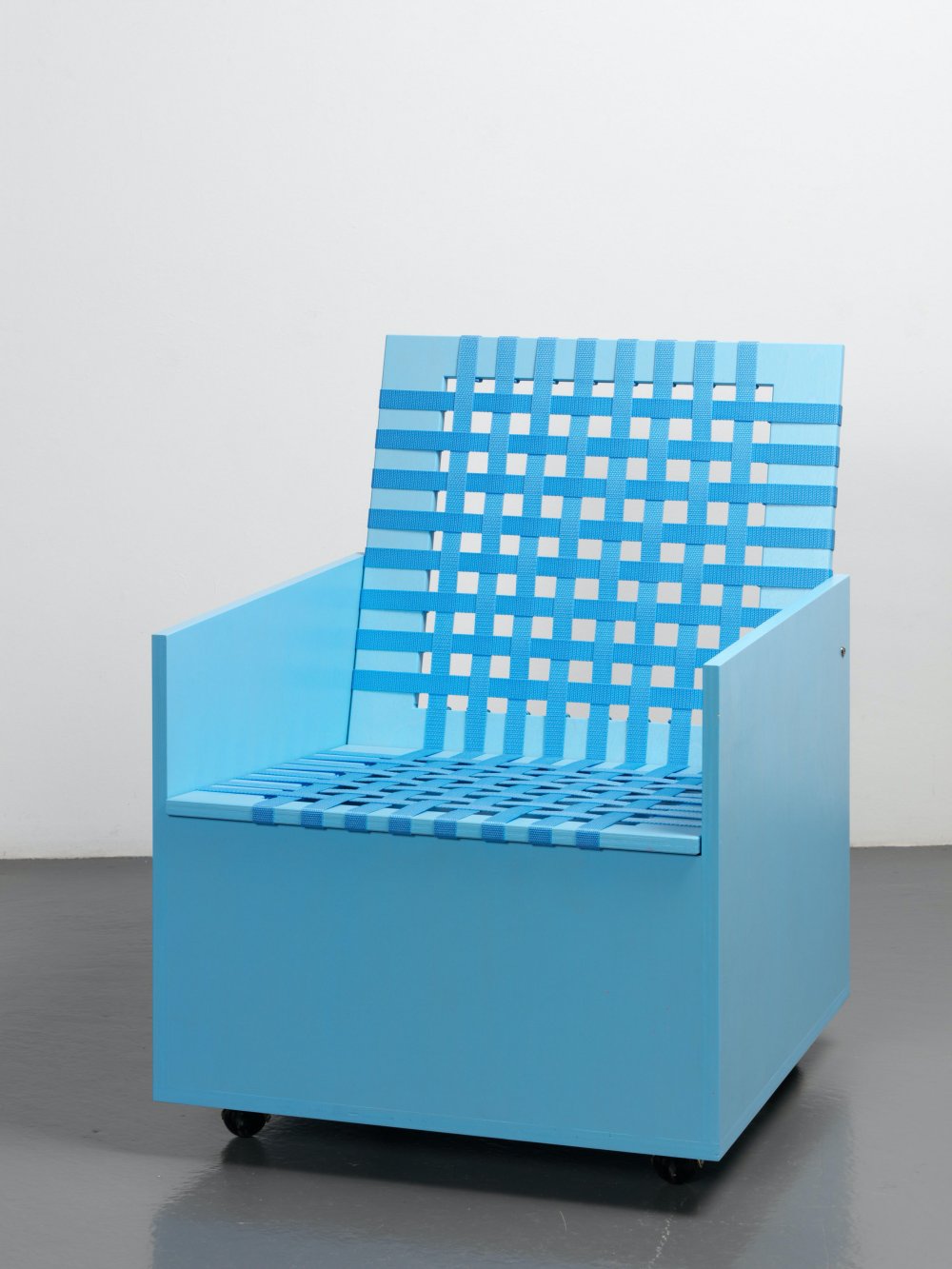 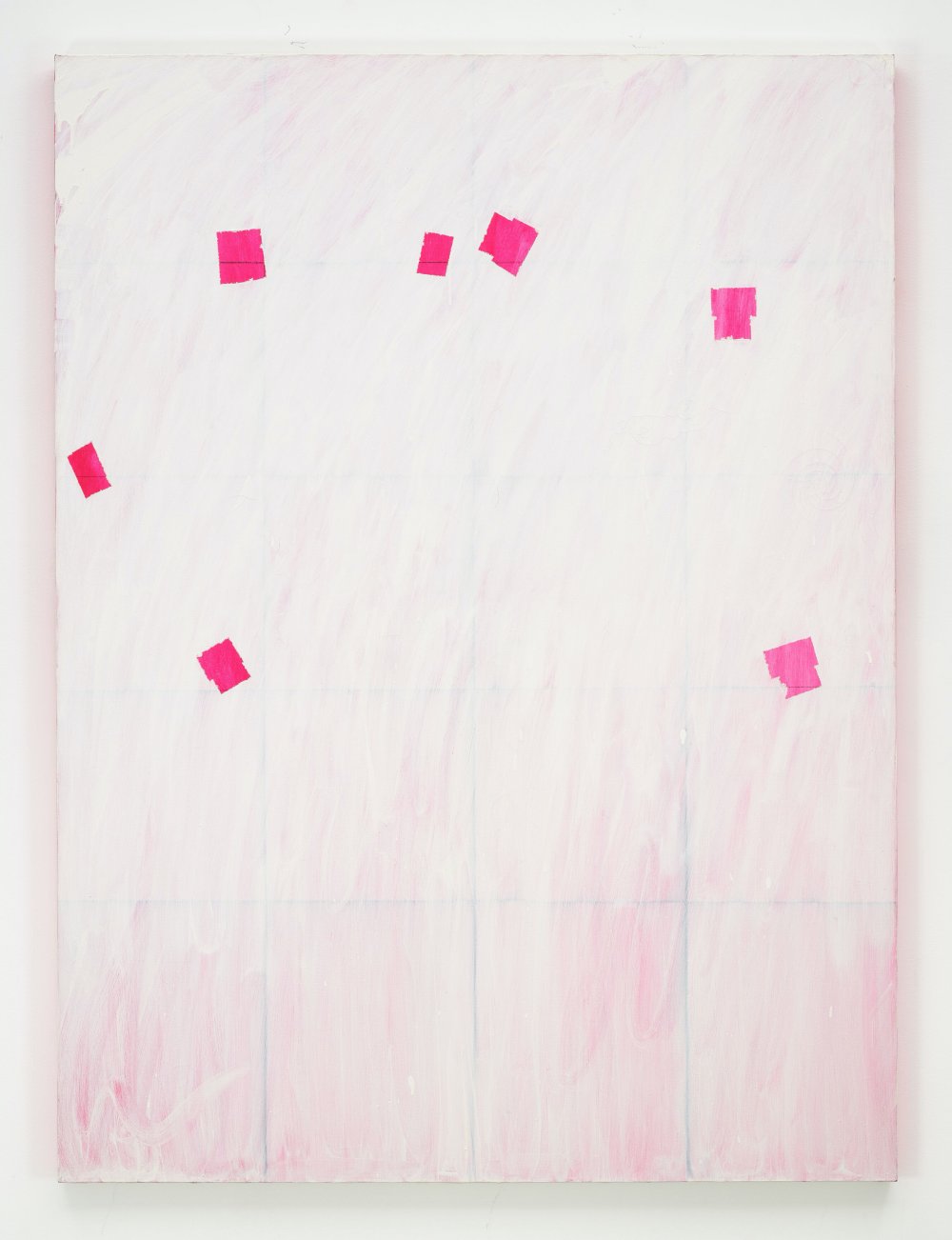 Mary Heilmann
Our Lady of the Flowers, 1989 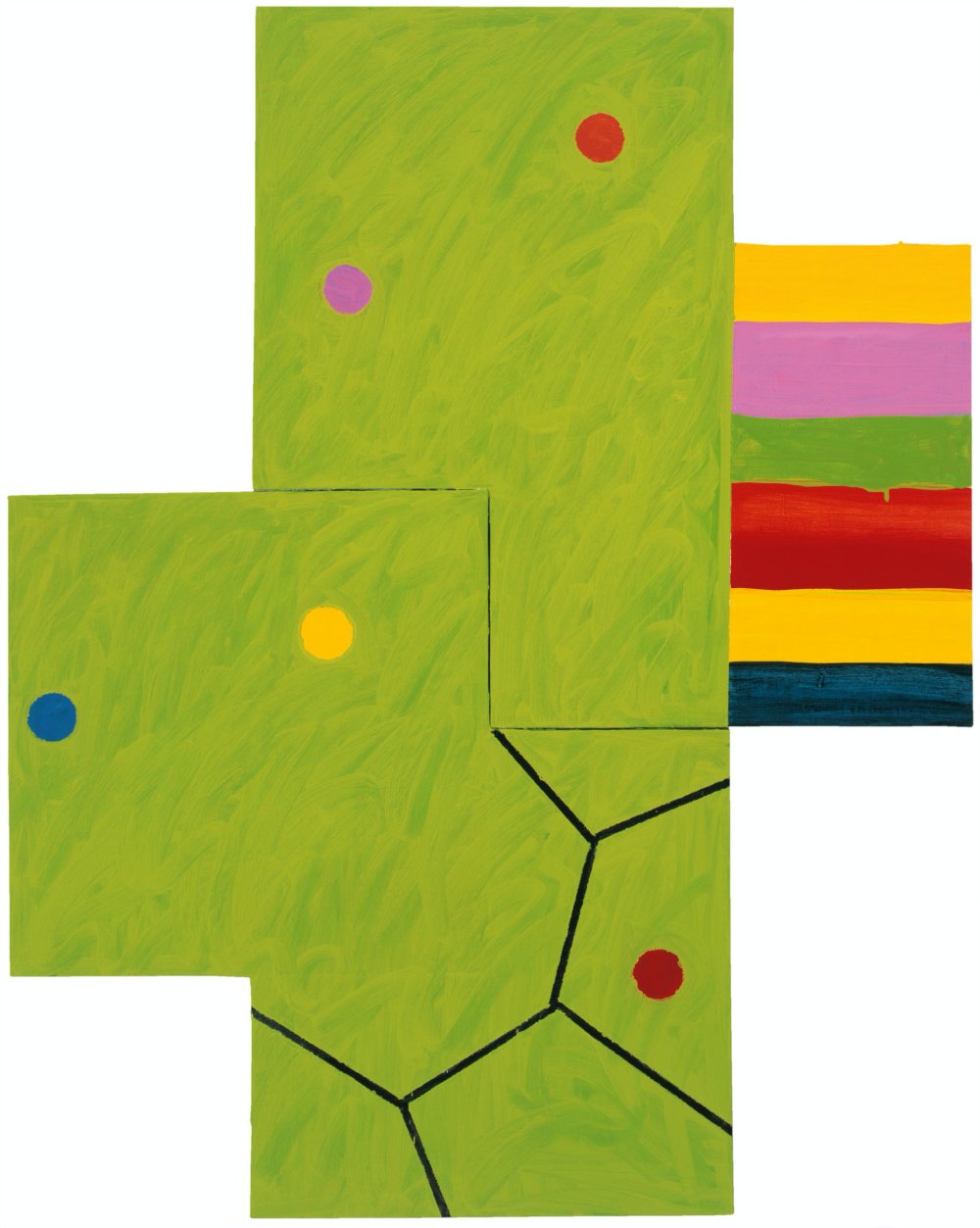 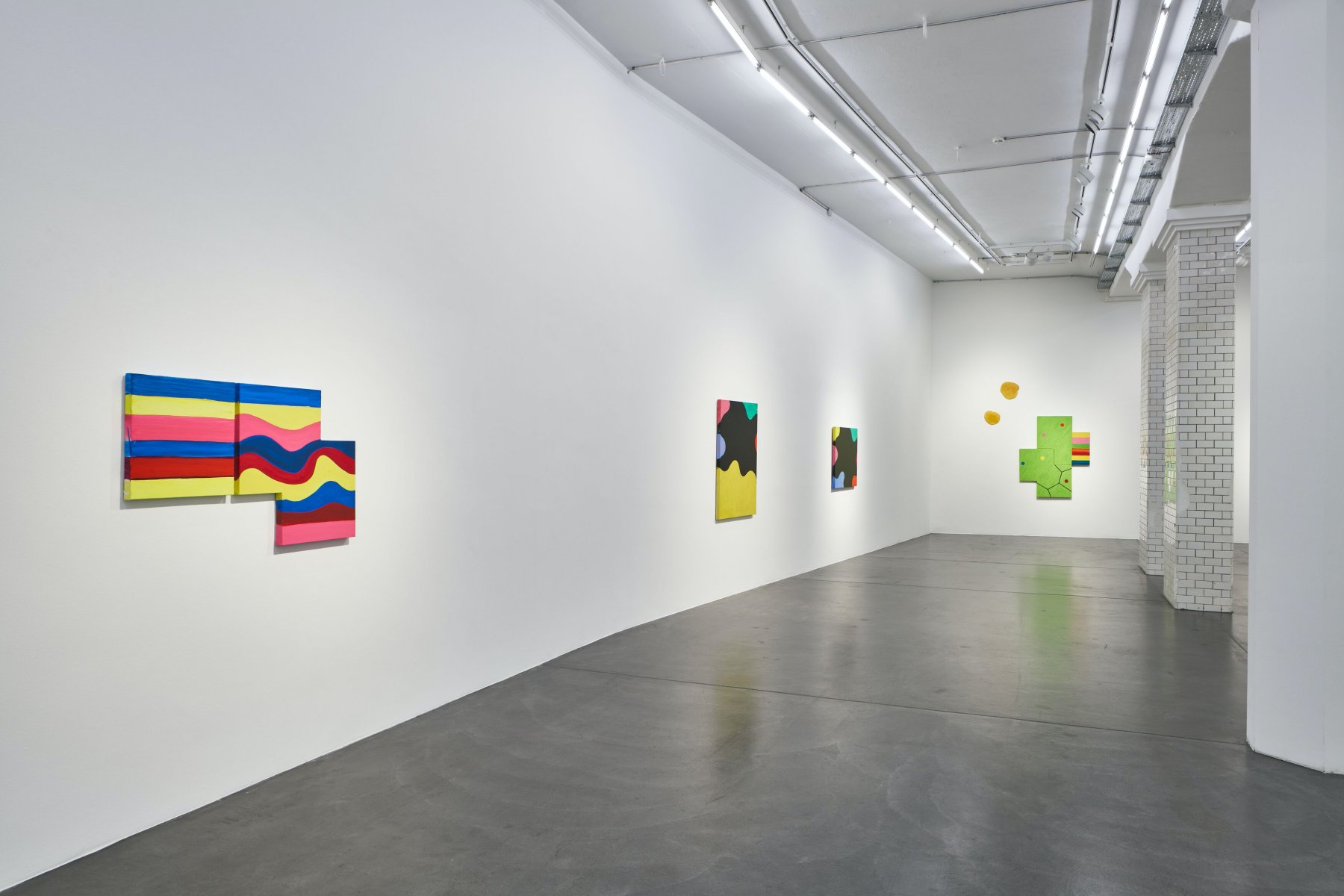 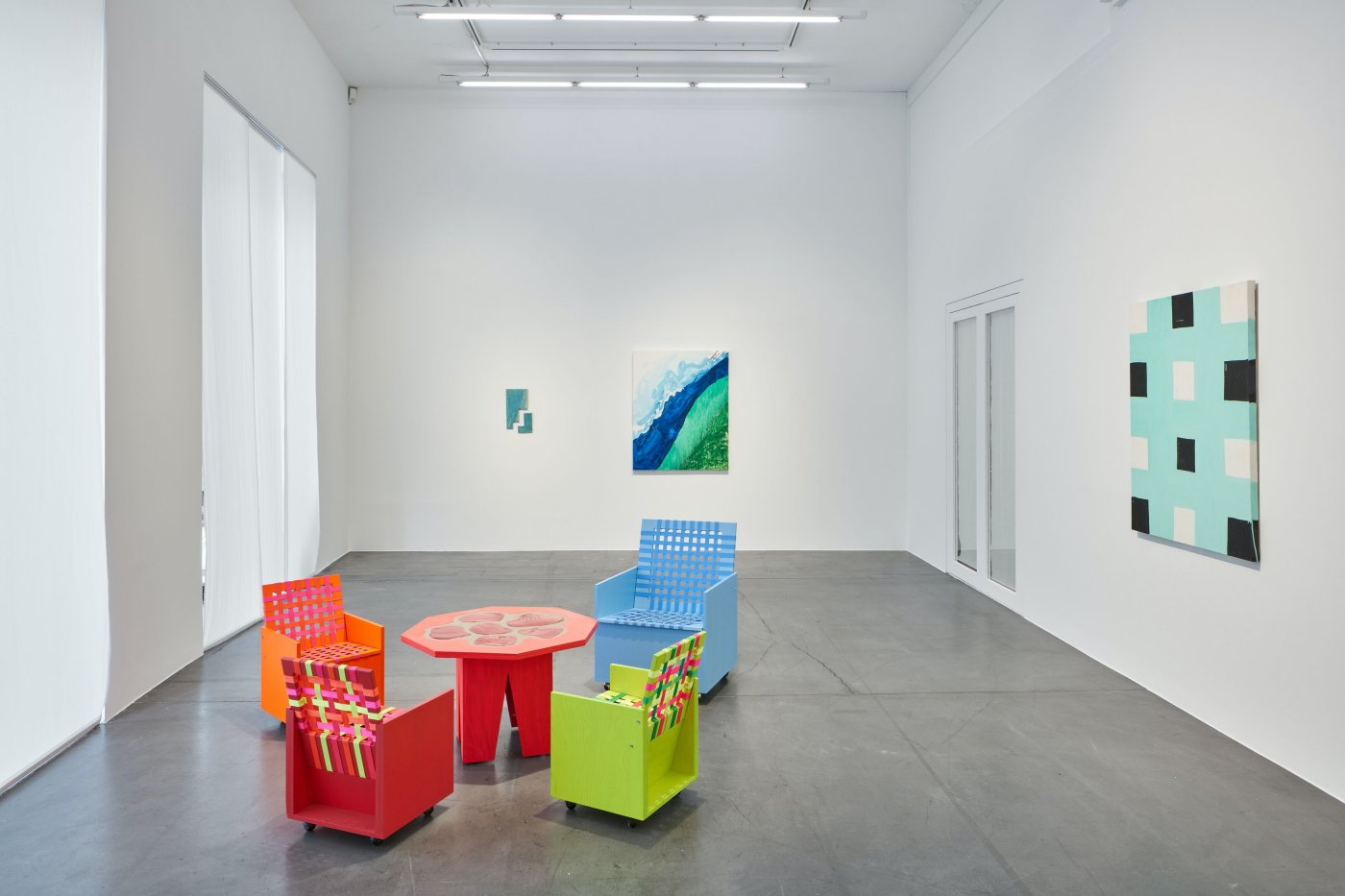 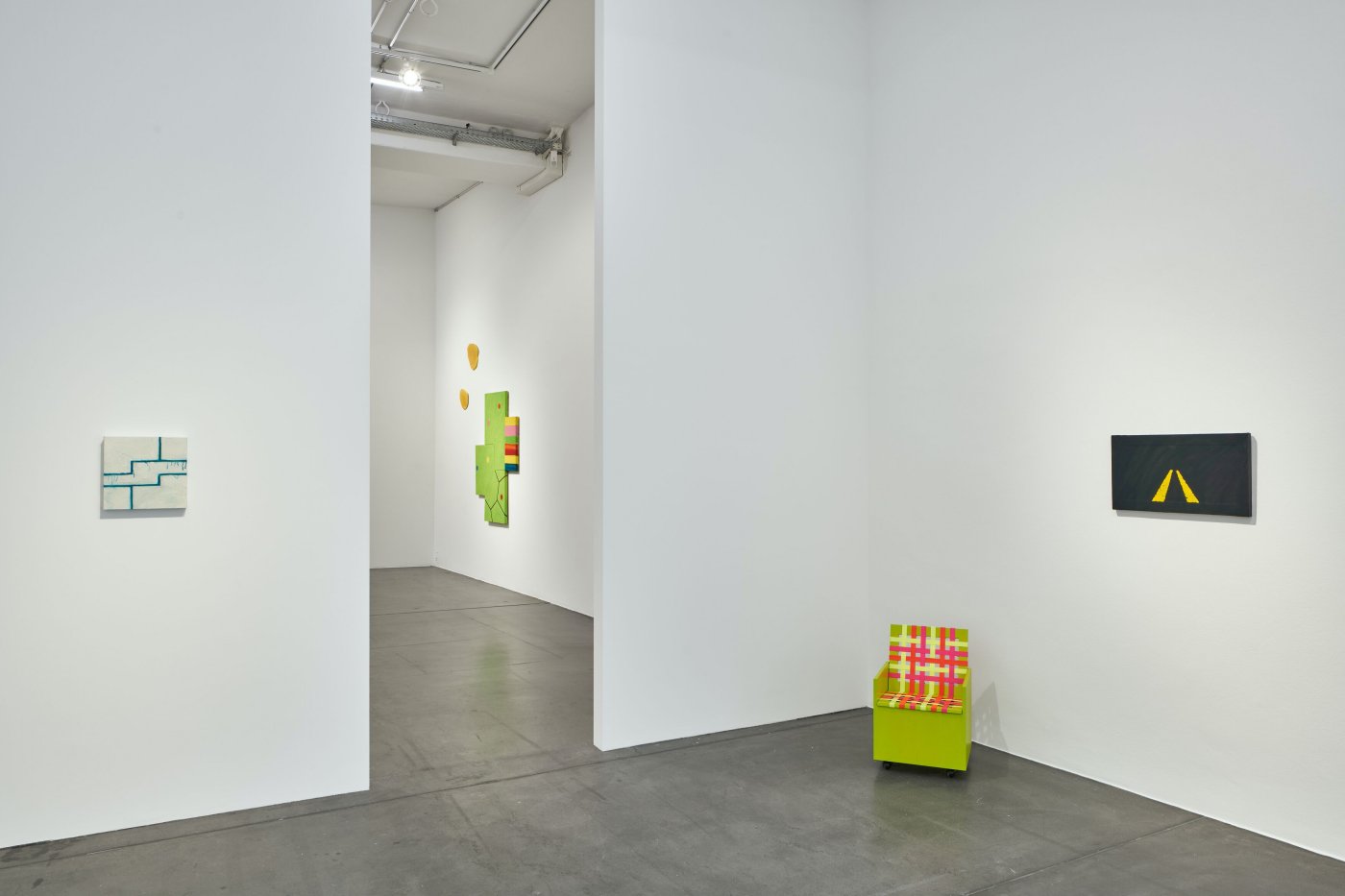 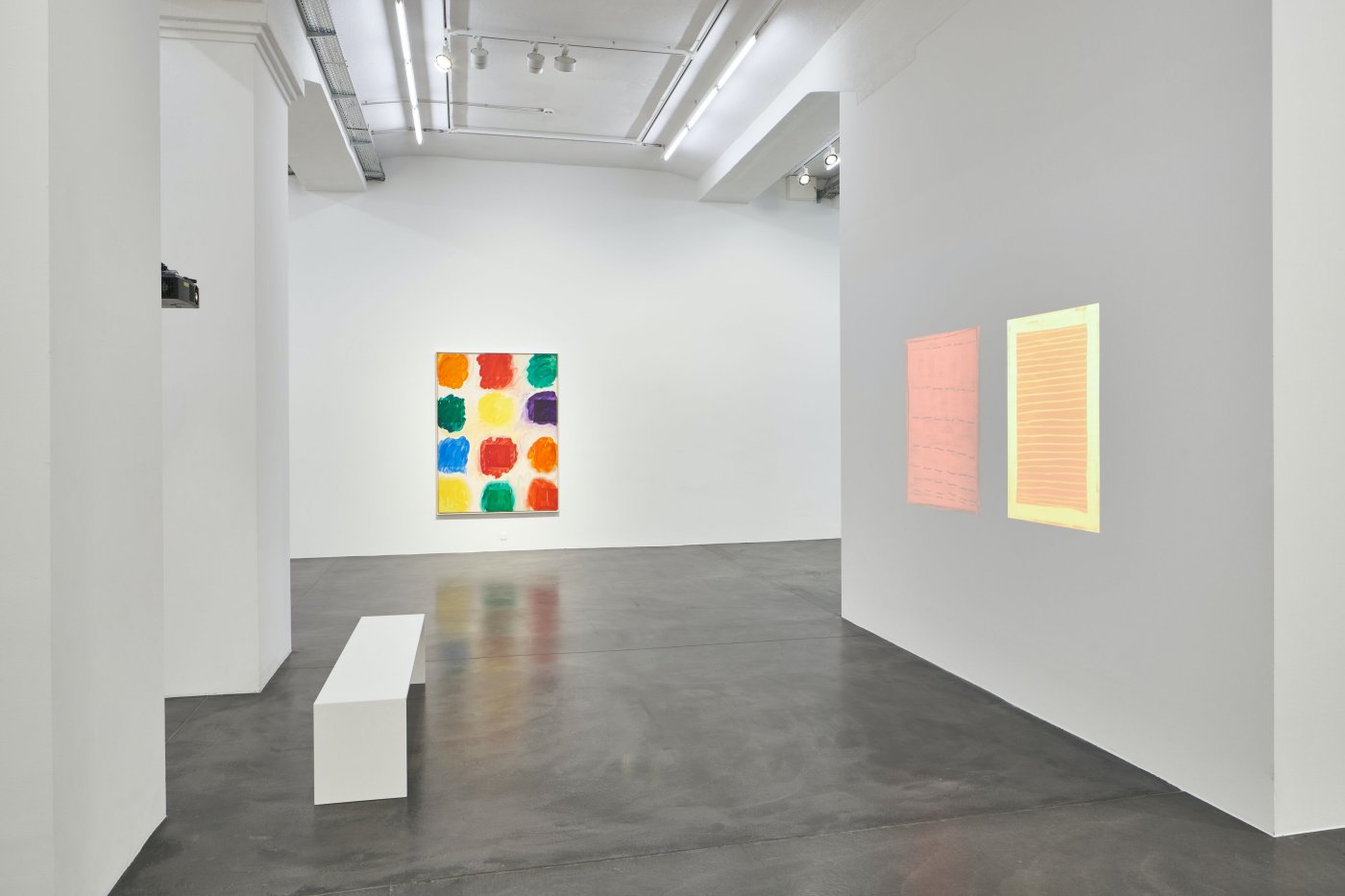 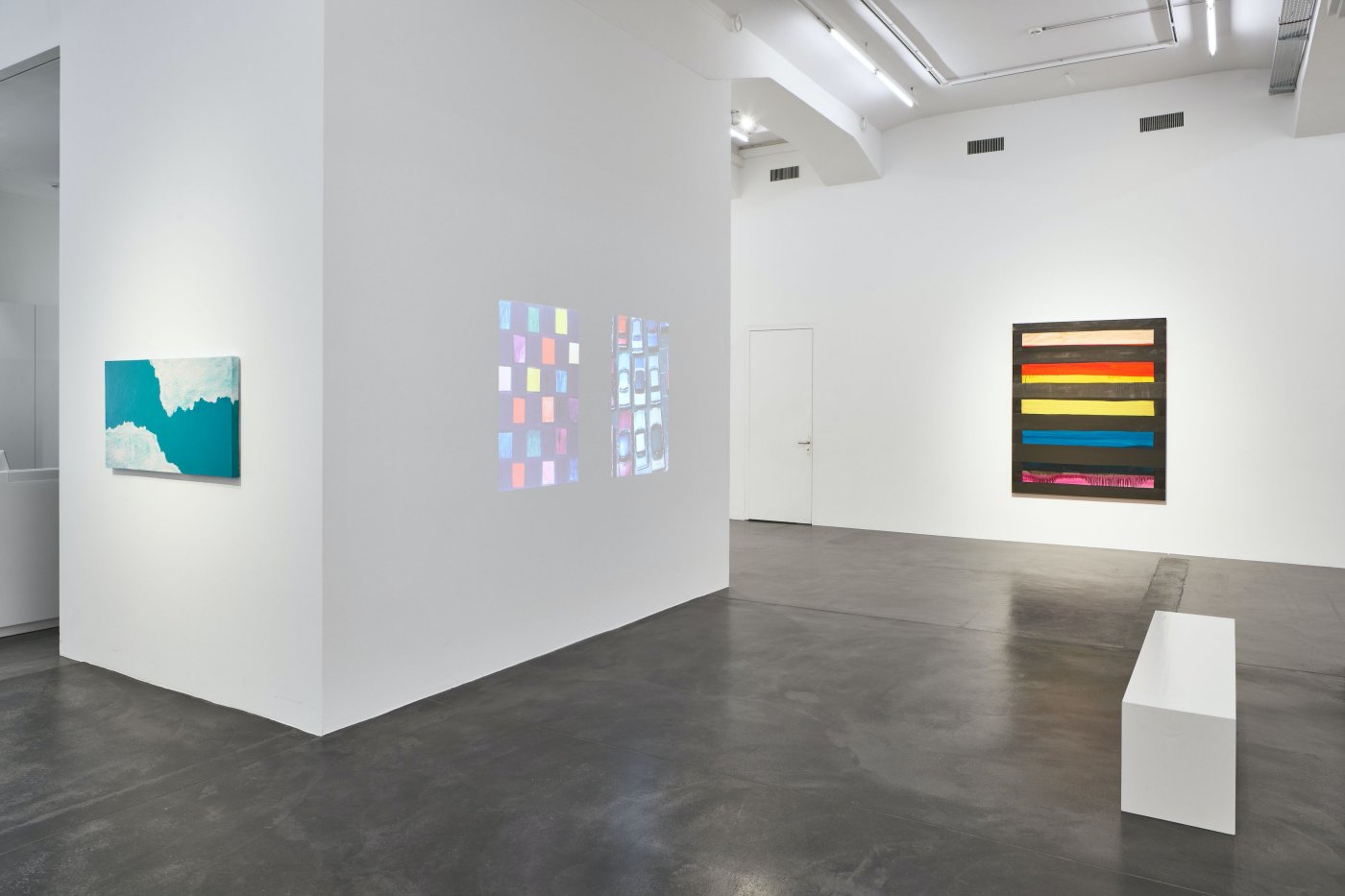 Along with earlier work dating back to the 1970’s, the exhibition features a new body of paintings made during the global pandemic at her Long Island studio in Bridgehampton, New York. It also includes a digital slide projection, titled ‘Her Life’ (2006), which is accompanied by a musical soundtrack, resonating the same energy and vibrancy of the works. Heilmann’s career has been spent melding abstraction with elements from popular culture and craft traditions. Her works often draw from her own personal experiences, and subtly reference Heilmann’s favourite landscapes, songs and movies, resulting in a wholly original and pioneering oeuvre. She has said, ‘Each of my paintings can be seen as an autobiographical marker, a cue, by which I evoke a moment from my past, or my projected future, each a charm to conjure a mental reality and to give it physical form.’

Grounded in the soul of California, Mary Heilmann’s practice draws from her memories of the distinctive colours and lines of the West Coast’s landscape and surf culture. Under these influences and through the deceptively simple means of painting – colour, surface, and form – Heilmann physically manifests nostalgic impulses, memories, and cultural references from the viewer’s collective memory, allowing the work to remain accessible on both personal and universal levels. Heilmann’s painting ‘Driving at Night’ (2016), is evocative of night driving along scenic highways and evokes the very familiar narrative of road trips, road movies and video games. Heilmann also likes to make paintings in which a personal narrative is alluded to via the title, for example ‘Our Lady of the Flowers’ (1989) is the title of a book by author Jean Genet whom the artist admires. In this way, it transcends the seemingly opaque structures of geometrical abstraction by infusing it with the content of daily life.

The paradigmatic shift in Heilmann’s career to painting occurred after her relocation to New York City in 1968, having previously been focused on sculpture and ceramics in California. While the medium of painting was proclaimed ‘dead’ by contemporary artists and critics, Heilmann undertook a conscious effort to ambush expectations, contradict art historical traditions, and provoke conversation by prioritizing a loose handling of paint and evidence of her hand and process within each work. These goals ultimately served not only to advocate for painting as a medium, but also to disrupt prevailing theories of the hard-edge and colour field movements of the 1960s and 70s. Heilmann’s masterful treatment of bold colour and the use of a shaped canvas is evident in works such as ‘Chemical Billy’ (2000), where the composition is not determined by the shape of the canvas. The boundaries of her works are thus not closed but open, and in dialogue with surrounding space. Many of Heilmann’s shaped paintings comprise two canvases, either joined or separated, creating a highly dynamic composition different from standard rectangular works. While others also explored this approach to painting, Heilmann distinguished her use of the shaped canvas by abandoning the rigid structure of geometrical abstraction often paired with it, in exchange for a more content driven and spontaneous gesture.

During the months of the pandemic, the artist has remained at her studio in the oceanside hamlet of Bridgehampton, immersing herself in the mutable conditions of light, air, and colours specific to the oceanfront environment, channelling her observations into new paintings that expand upon her ongoing fascination with waves and water. Drawing from a life lived on two coasts, the new works on view in this exhibition, such as ‘Geometric Break’ (2020) and ‘Montauk’ (2020), synthesize her memories of coastal vistas of her youth with the ever changing, elusive geometries of Atlantic Ocean waves.

The emphasis on interaction in her work, whether personal, art historical, or aesthetic, also takes on phenomenological form by way of Heilmann’s furniture works. Over the years, the artist has used abstracted chair motifs in her paintings and in 2002 Heilmann began designing and making real chairs. Performing a function within the gallery space, each piece of furniture is a three-dimensional painting that weaves the artist’s ideology into the everyday, this exhibition will feature chairs fabricated by the artist including the colourfully woven ‘Clubchair 59’ (2008). Sharing the bright chromatics of her paintings and chairs, a selection of Heilmann’s ceramic cup and saucer sets are also on display, revealing truly sculptural qualities in and amongst the paintings and chairs.

This exhibition is a voyage through over 40 years of Heilmann’s career. The works on view reinforce the artist’s consistent inventiveness and deep connection with the boundless unknowability of the ocean, the landscape of her America and nostalgic impulses.

Influenced by 1960s counterculture, the free speech movement, and the surf ethos of her native California, Mary Heilmann ranks amongst the most influential abstract painters of her generation. Considered one of the preeminent contemporary Abstract painters, Heilmann’s practice overlays the analytical geometries of Minimalism with the spontaneous ethos of the Beat Generation, and are always distinguishable by their often unorthodox – always joyful – approach to color and form.

Raised in San Francisco and Los Angeles, Heilmann completed a degree in literature, before she studied ceramics at Berkeley. Only after moving to New York in 1968 did she begin to paint. While most artists at that time were experimenting with the concept of dematerialization and demanding that painting should avoid any references to experience outside the material presence of the work itself, Heilmann opted for painting, rebelling against the accepted rules. ‘Rather than following the decrees of modern, non-representational formalism, I started to understand that the essential decisions taken during the creative process were more and more related to content. The Modern movement was over…’

Since then, Heilmann has created compositions that evoke a variety of associations. Her work may be non-representational and based on an elementary, geometrical vocabulary – circles, squares, grids and stripes – but there is always something slightly eccentric, casual about them. The simplicity of the forms is played down by a deceptive form of nonchalance: the contours are not clearly defined. In some paintings, amorphous forms appear to melt into each other like liquid wax. Splashes of colour can be discerned, sharp edges bleed for no apparent reason, and the ductus of the brushstrokes is always perceptible. Heilmann’s casual painting technique conceals a frequently complex structure that only gradually reveals itself to the viewer.