David Lewis presents Mary Beth Edelson: A Celebration. Marking the artist’s third solo exhibition with the gallery and the one year anniversary since Edelson’s passing in April 2021. 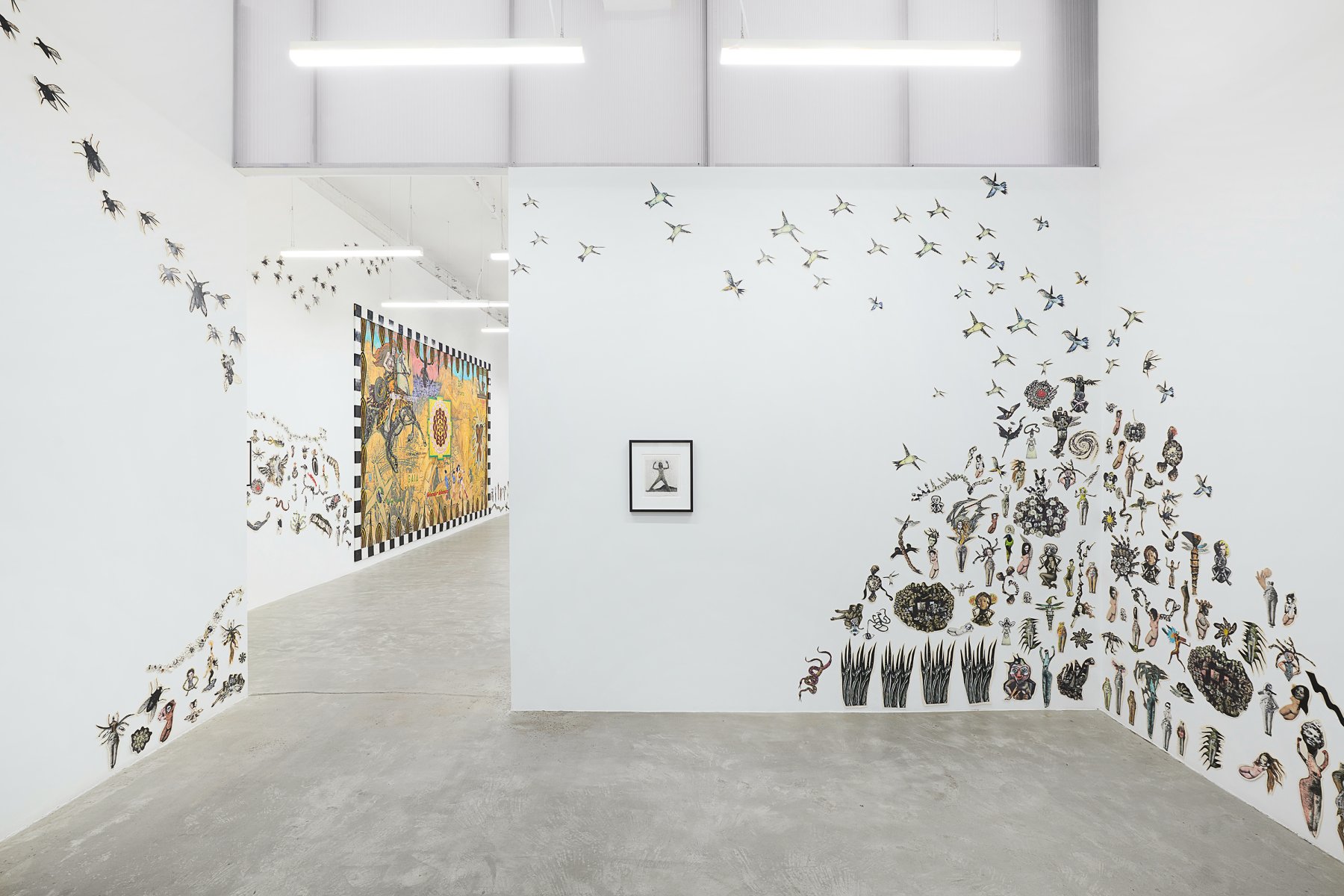 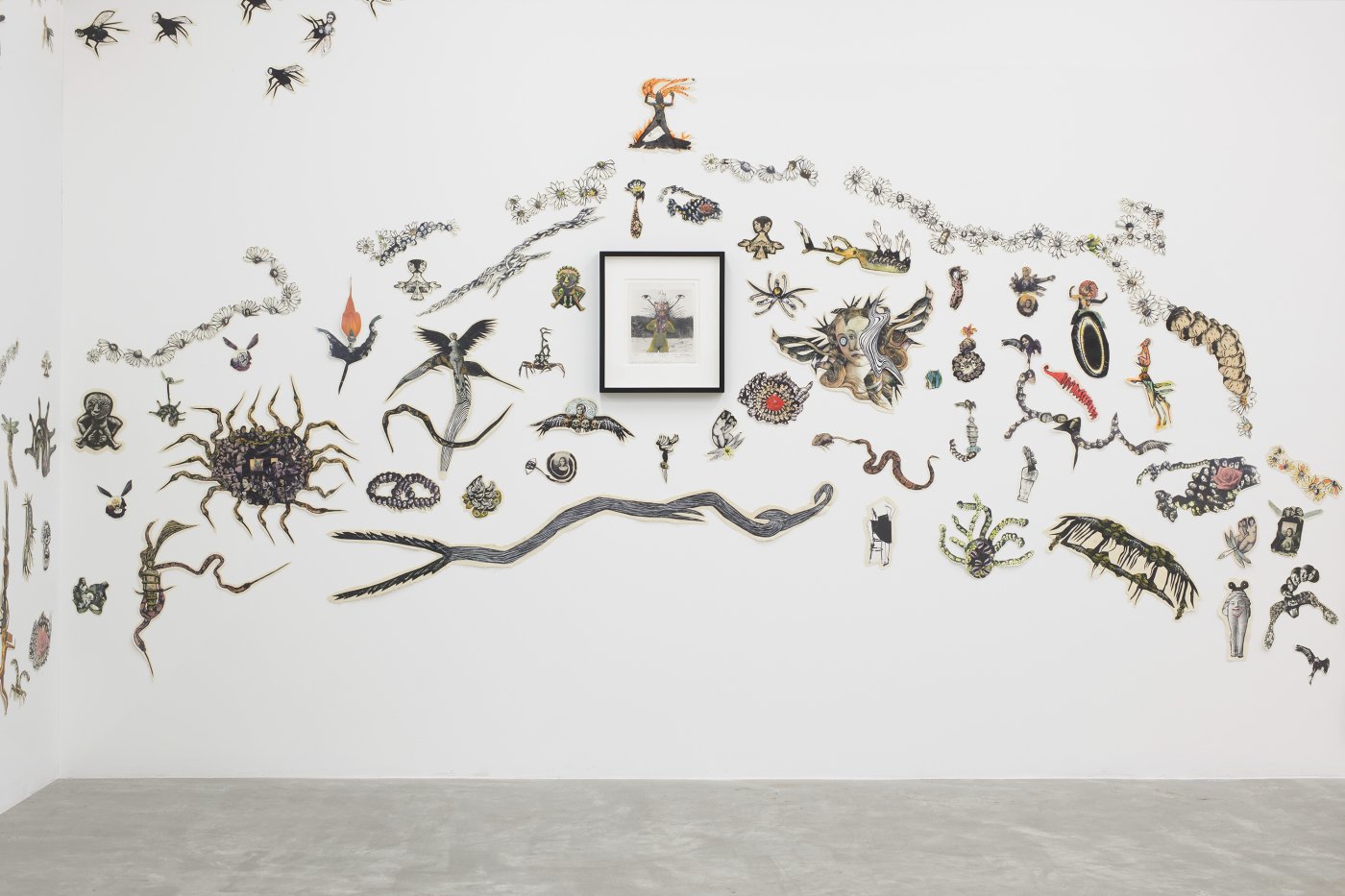 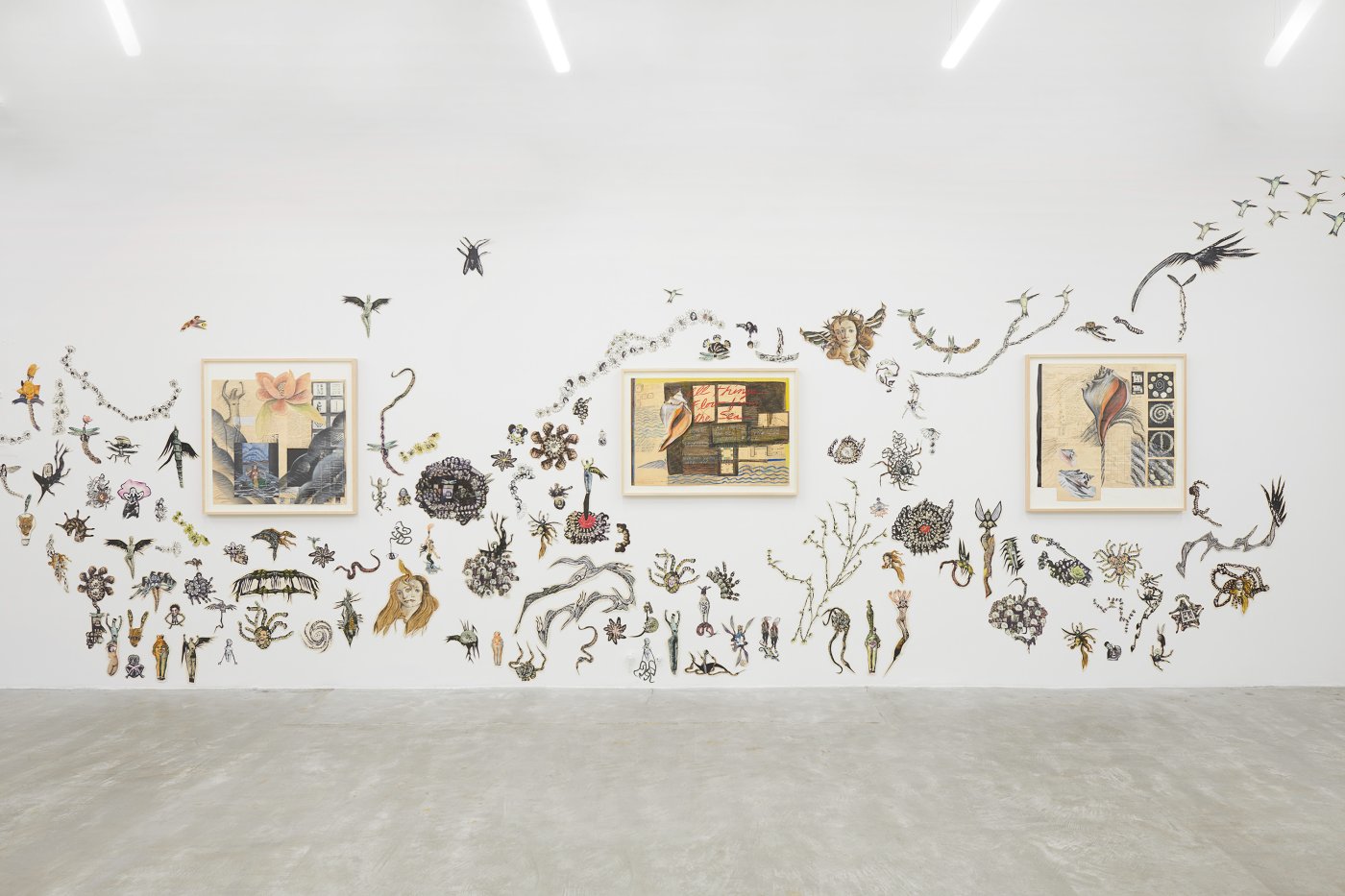 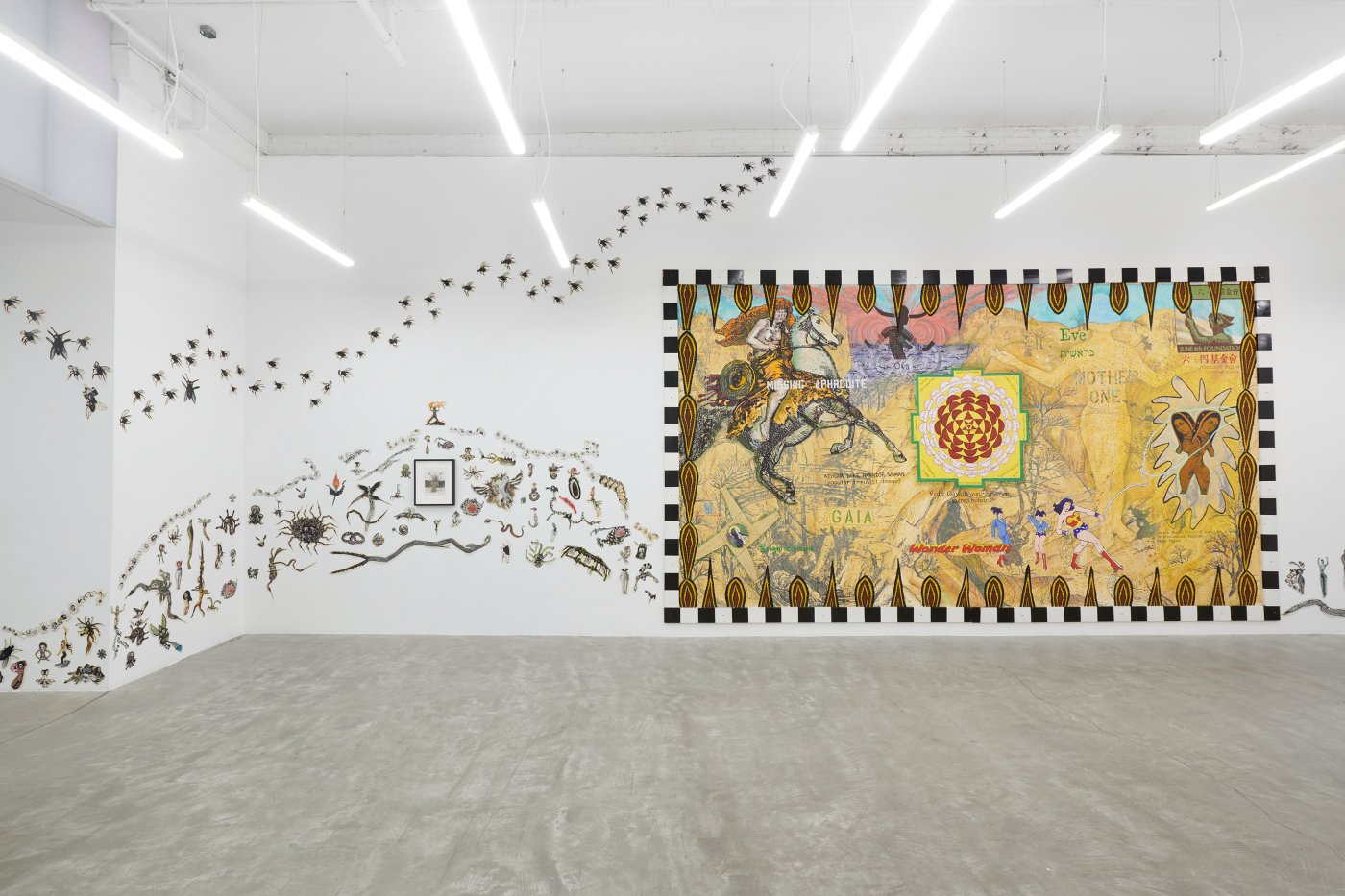 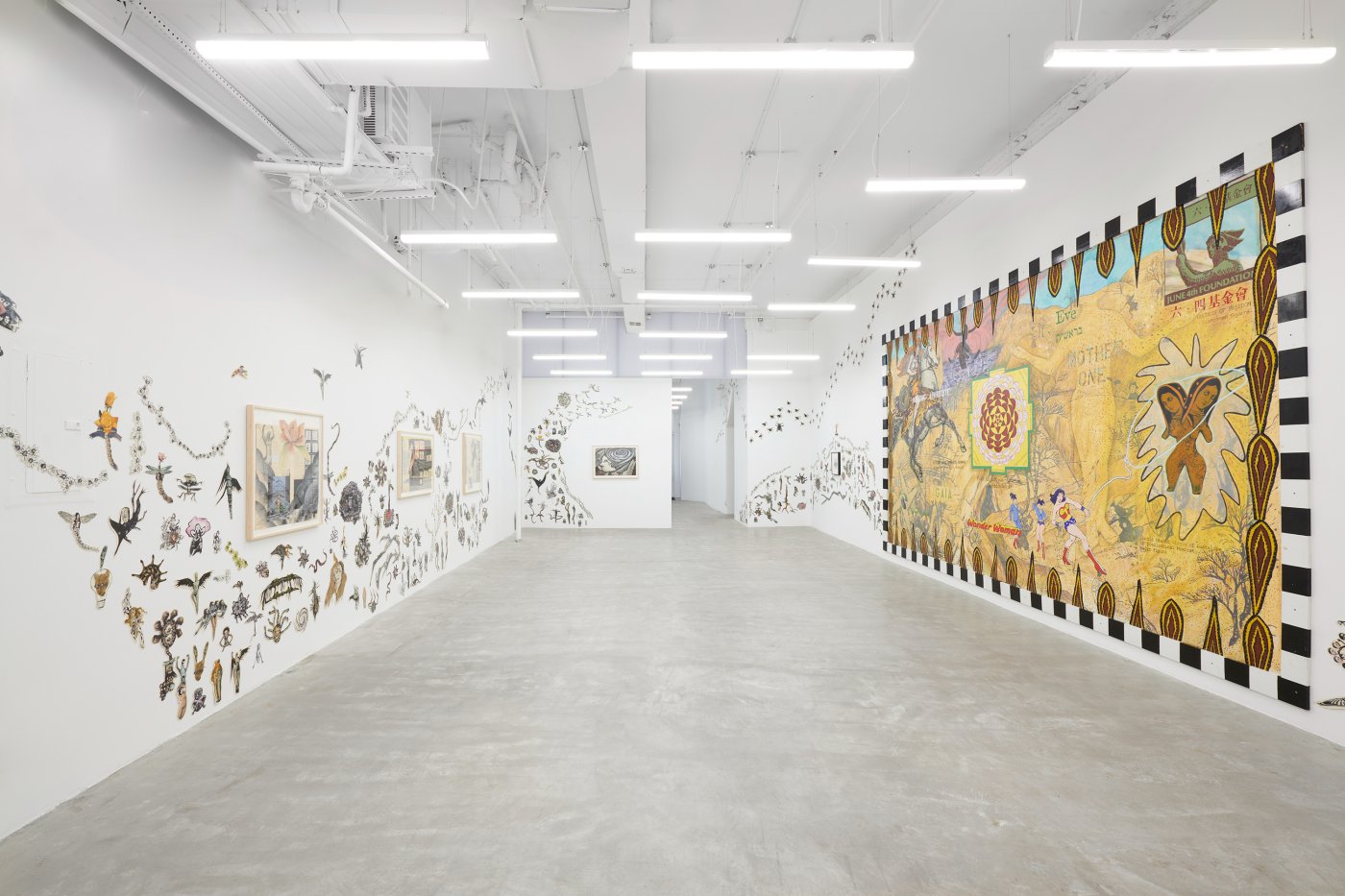 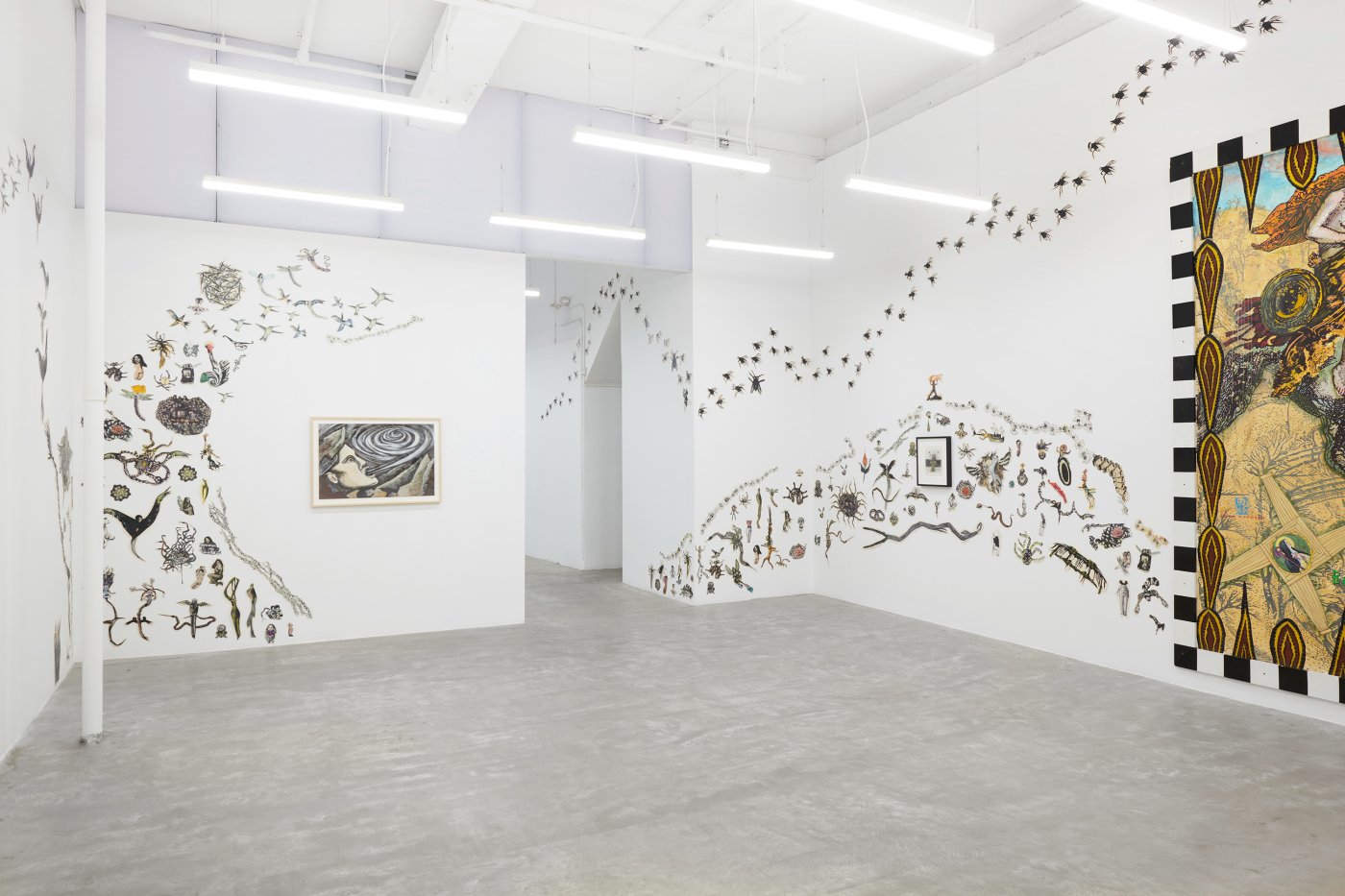 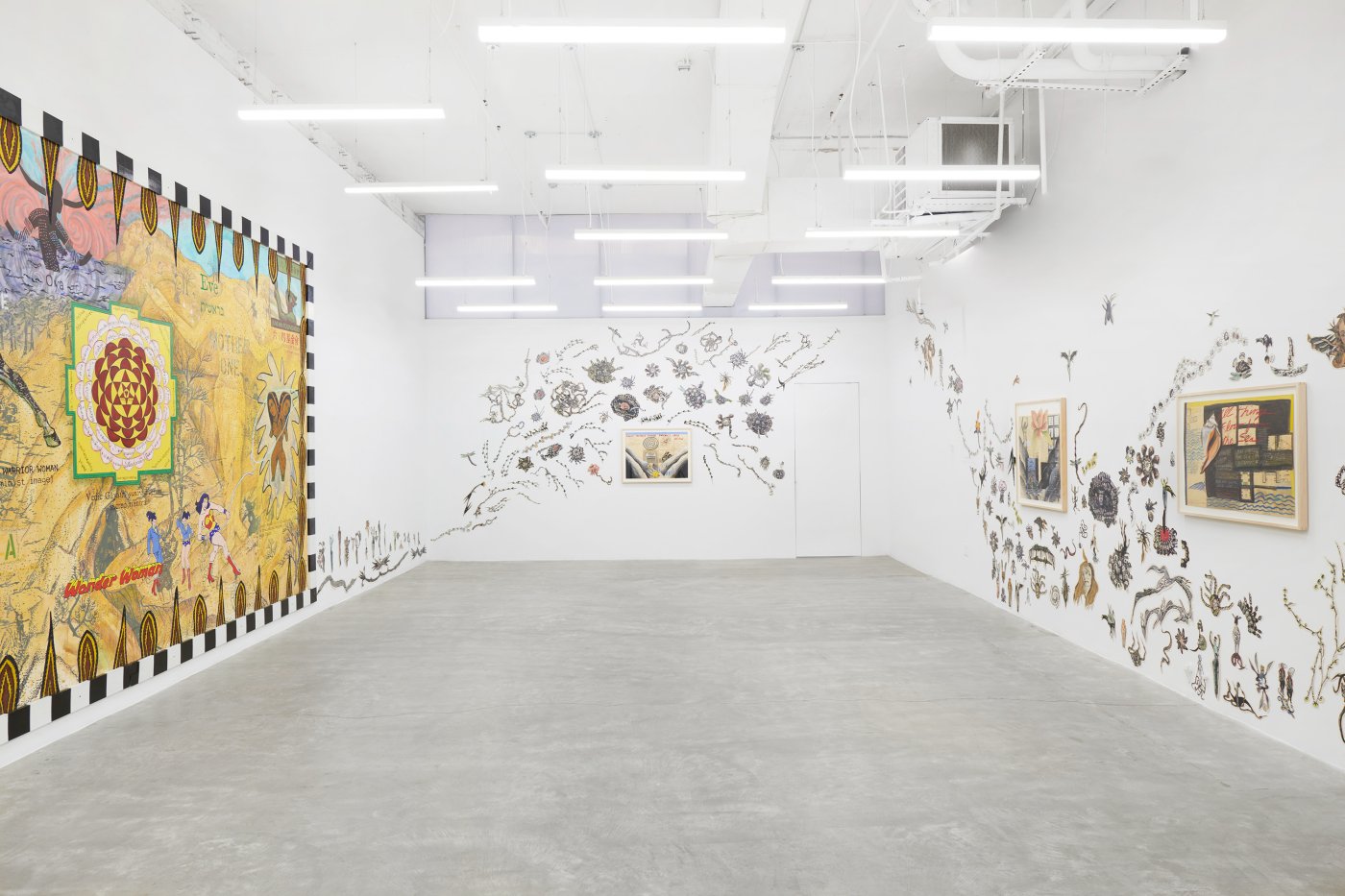 Mary Beth Edelson: A Celebration is a dedication to the artist’s groundbreaking contributions to art history, and encompasses a range of media from throughout Edelson’s important career, emphasizing the breadth and scale of her formidable achievement.

The exhibition presents four distinct bodies of work across the whole of Edelson’s career, from earliest collages and iconic Woman Rising photographs (1970s) through the rarely-seen monumental painting In Exile (1989). Edelson’s largest and most ambitious work links Goddess imagery to Hollywood and superheroine archetypes (such as Wonder Woman) as well as historical events, above a postmodern tour of painting styles and histories, ranging from classical Chinese landscape painting to the Pattern & Decoration movement. At the center of In Exile is a meticulously crafted Gayatri Yantra, (Gayatri being the Mother Goddess to all Vedas), a sacred symbol encompassing the divine lotus and the sacred numbers associated with the primordial syllable Om. The large-scale painting serves as the greatest extension of Edelson’s meditation not only upon the Goddess archetype, upon which her fame and reputation were built, but also—an aspect of her achievement that is less well known—her consideration of these archetypes and energies in history and as active (and sometimes activist) elements in contemporary history and life.

Included as well are examples of the iconic Woman Rising series (Dematerializing / Trans-DNA and Burning Bright) (1975/1973), as well as early collages in which the poetic ingenuity of Edelson’s ways of making can be clearly seen, formal strategies and combinations that are suggestive of the image, ideas, and ambitions that she would develop throughout her long career. Throughout the space, linking the framed individual works, are arrangements of Edelson’s fantastical wall collage: at once a portrait practice, a bestiary, a zoology, cosmology, an art-historical dream and revision (Sandro Boticelli’s Birth of Venus), both accessible and arcane, arranged here to suggest the simultaneously flowing and soaring nature, the iconographic exactness, sudden wit, and energetic vastness of Edelson’s vision.

Mary Beth’s work has been exhibited at museums throughout the United States and internationally, and is in the permanent collections of major institutions including the Guggenheim, the Museum of Modern Art, the Brooklyn Museum, the Whitney Museum of American Art, Malmö Kunstmuseum and the Tate Modern.