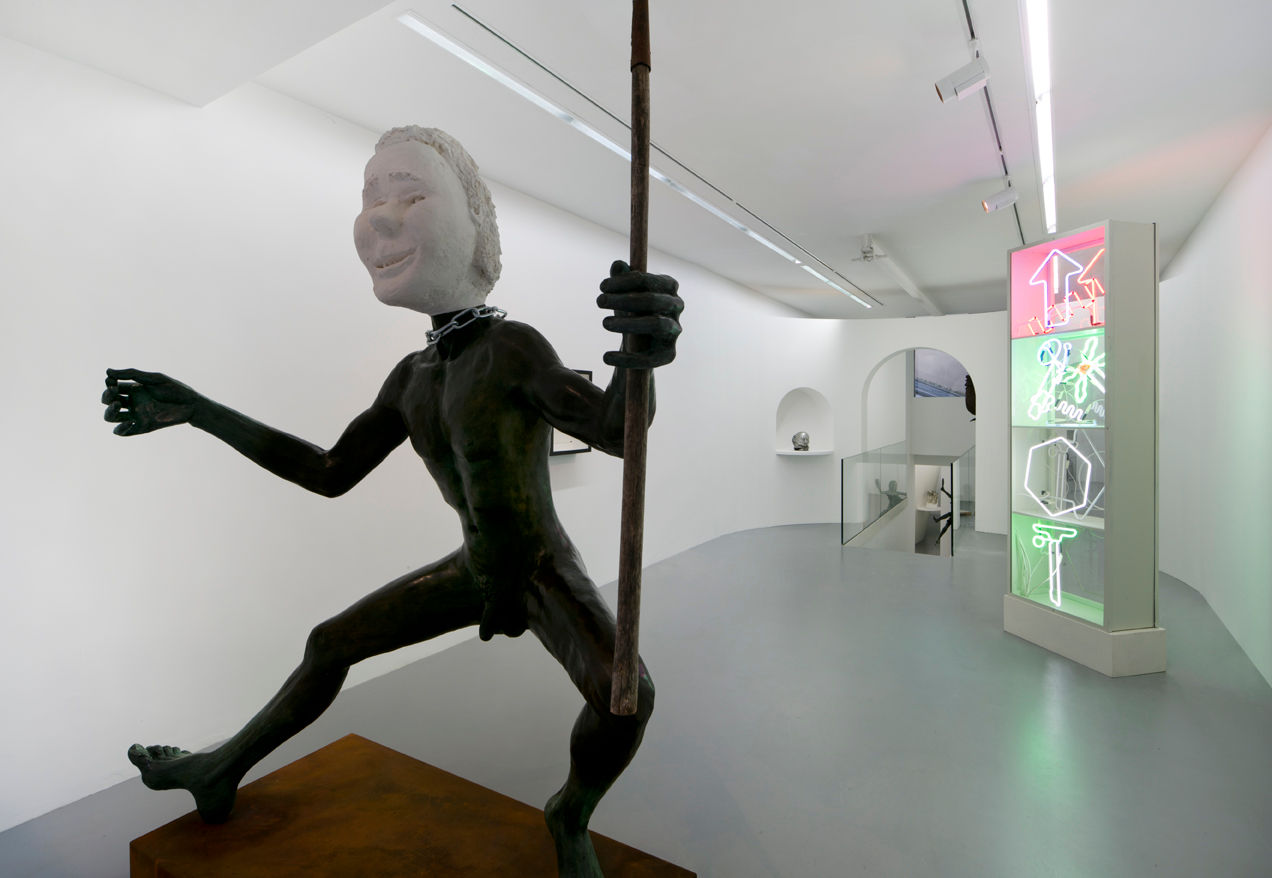 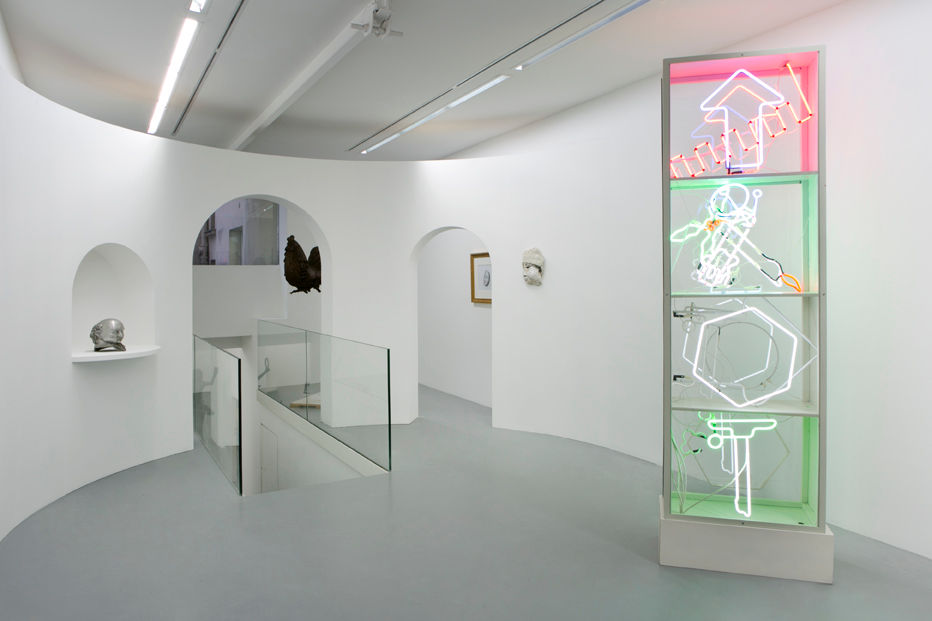 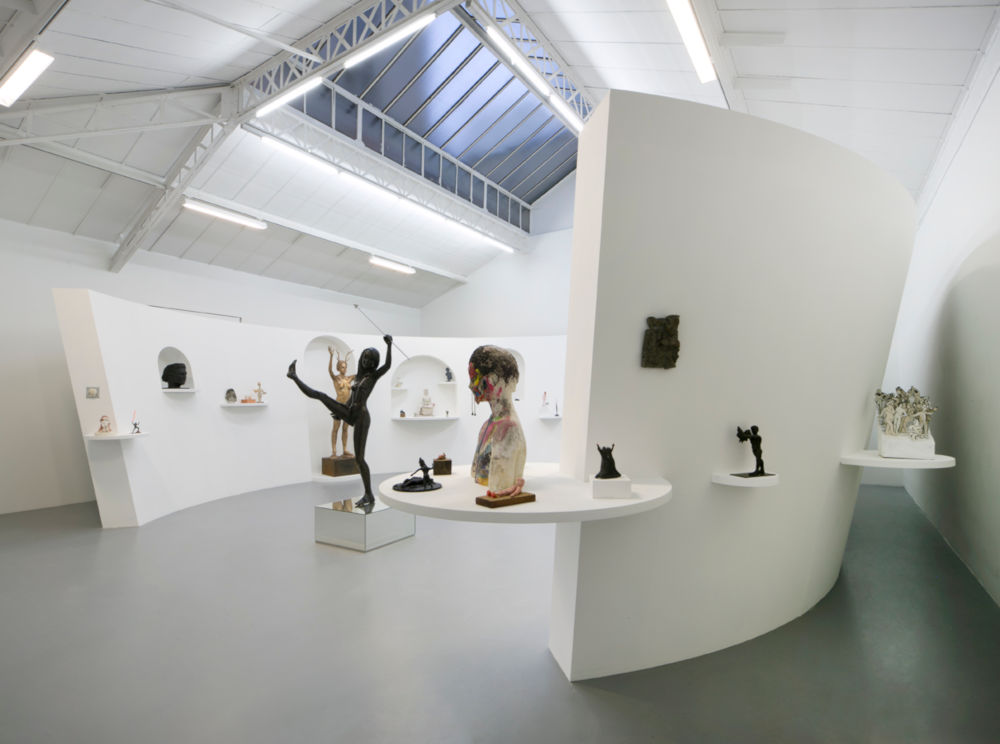 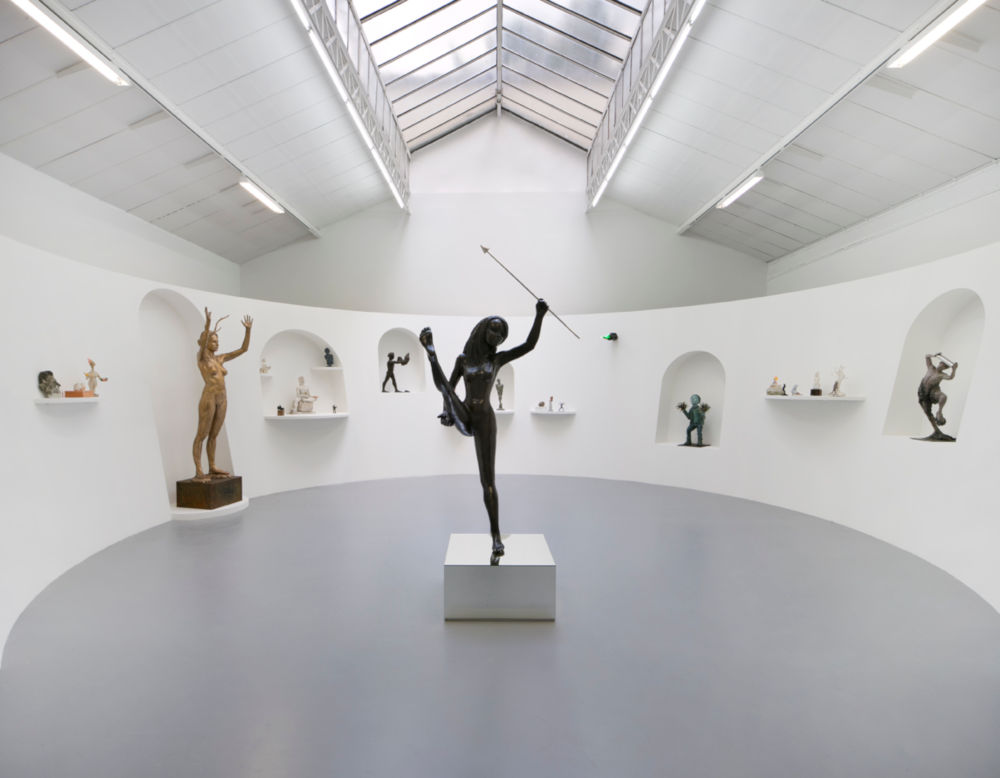 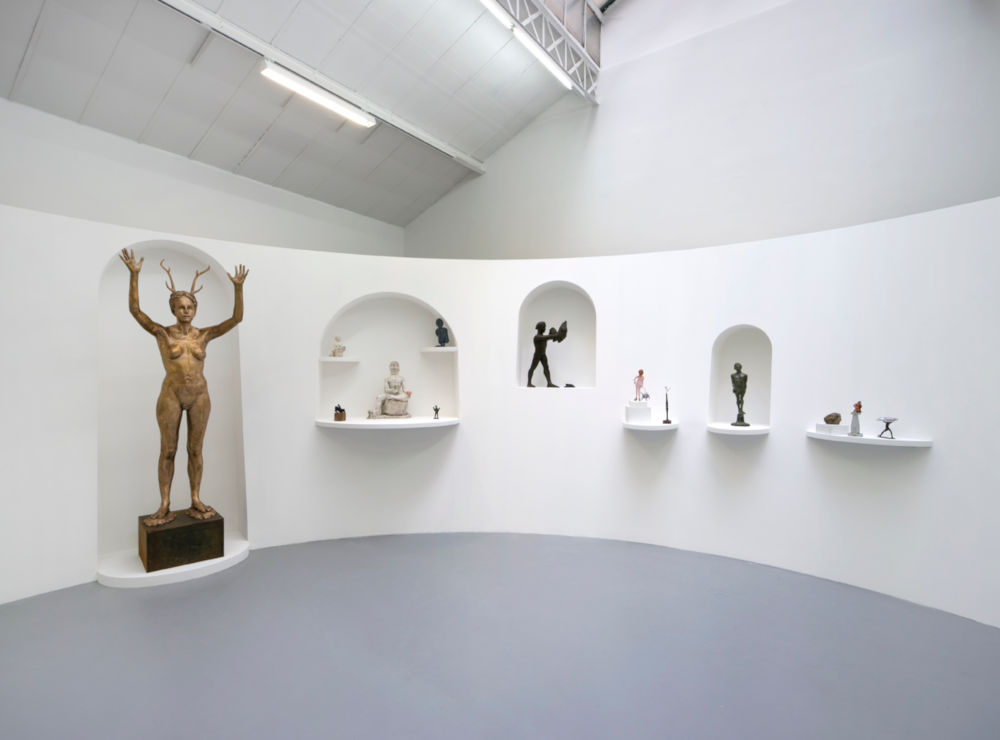 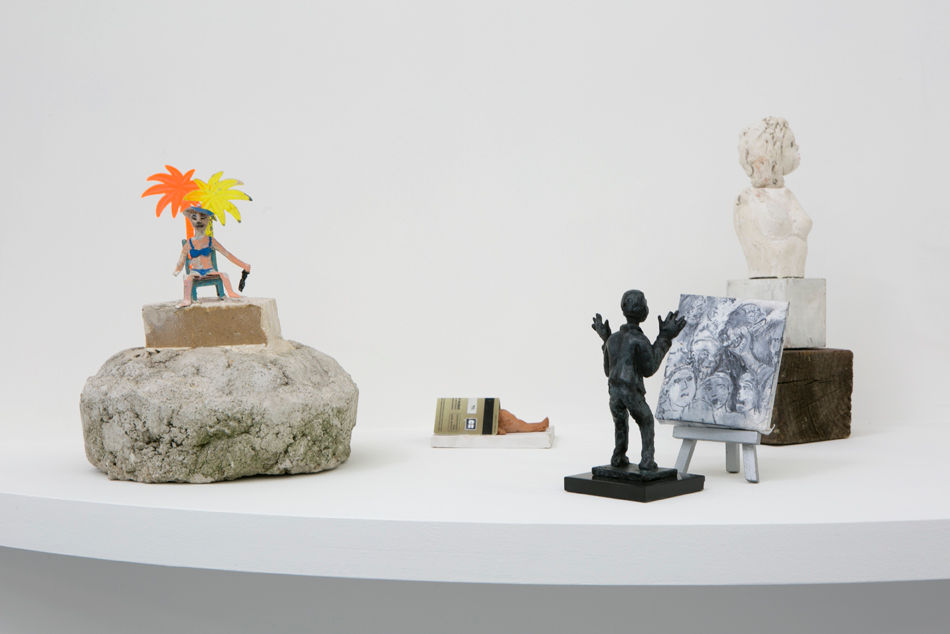 A house in the country, with thick walls separating it from the fields and woods roundabout. In the crevices between the stones, here and there on a shelf, or on a table behind a pile of books, there lives discreetly a whole people of little beings, made out of trifles and forming worlds of their own. Martial Raysse seems to have put them there just after shaping them. In his hands everyday objects come to life and find new purpose: the boy of Salut les potes ! (2014) holds out pins with multicoloured heads, which turn into burning bushes or hairs in the palm of the hand; a woman dancer teetering on the rung of a chair is Danse pour nous petite perle (2011); the cry of Ohé ohé matelot (2017) is addressed to a sailor coiffed with a white cork and steering a boat made from the lid of a tin can; and a mango net serves as a ball gown for the girl holding La Perle du cœur.

Martial Raysse is a genius of the small form, of the improvised assemblage, of salvage and artistic hijacking. This is another facet of the person we know as a masterly painter. For him this kind of sculpture is an enormous playground where he can give free rein to meticulous dissonances, using anything that comes to hand: an out-of-date credit card in Le Dessous des cartes (2018), a scrap of chenille thread in À l’aise (2017). It’s like carnival time, when everything is permitted. In Après tout (2017) a small nude female figure modelled in raw clay has slipped on high-heel, red and yellow plastic Barbie shoes fit to fire lots of feminine imaginations; a small masterpiece made of next to nothing. These are intimate, almost cottage-industry creations put together in a spare space on the kitchen table. And maybe it’s here that Raysse’s whimsicality finds its most extreme outlet, even more so than in drawing, charged as the latter is with the gravity of its dialogue with the old masters.

Retour ou sans retour (2018) is a little terracotta man sitting on a boulder—actually a pebble—looking preoccupied: Return or no return? he seems to be asking himself. A puddle of plaster suffices for a dog’s muzzle in Pedigree et tout (2018). This unclassifiable sculptural style makes fun of its own mix of fine and (mostly) cheap materials. Sometimes, as in Seuls au monde (2018), a few pencil strokes fill out a declaration in black and white or colour, like a drawing in space or a maquette for a painting.

Full of an impish vitality, these little theatres sometimes take the form of an arena or an enclosure where you come upon a goat, a donkey, and even, in Le Sanglier des mauvais rêves (2017), a wild boar getting in the way of a lovers’ tête-à-tête. Maybe these playlets are inspired by the Pig Game, whose rules remain a mystery for non-alumni of the Pig Commune that Raysse belonged to—was the guru of, you might say—in the early 1970s. A pie dish filled to the brim with semolina became a golden dune where the players manoeuvred farm animal figurines borrowed from kids passing through. There’s something of the visual pirouette here, a kind of weird projection. All these works have wonderful titles, which are also poems—Raysse has always considered himself a poet first and foremost.

Back in the old days he assembled vividly coloured plastic objects picked up in the Prisunic low-cost department store. This was the 1960s and his Hygiène de la vision series, with the object’s function dissolving into a tree-shape, a plexiglas column or a shimmeringly-plumaged bird of paradise. At the same time Raysse was putting together exuberant constructions that allowed expression of colour in movement, among them About Neon (Obelisk II) (1964), a quirky entanglement of the neon signs seen winking on and off on shopfronts. And only recently he used neon for his monumental relief, ReLeBainTurc, outside the mk2 Bibliothèque multiplex in Paris.

The Forme en liberté that had been part of his work since the 1960s became over time a hybrid creation, in turn a luminescent cutting from a simple slide, big corrugated cardboard sculptures or a tiny aluminium foil object on a wooden base. These are “variable geometry” shapes, to hark back to the title of a text he wrote in 1966. The third dimension has always been in his thoughts, right down to his approach to cinema—visionary at the time—with filmed images whirling around the room in a magic lantern effect.

One could easily imagine that fragments of his pictures, sets and characters had taken flight from the canvas and crystallised into three dimensions as sculptures large and small, in plaster and bronze. Yet sometimes the opposite is the case, giving the impression that three-dimensional personages have sparked paintings; as in the small bronze relief of a female nude, compositionally very similar to Raysse’s picture Dieu merci (2004) and not far removed from the very recent La Reine du monde (2018).

At the same time as his panoramas with their countless figures—for instance Ici Plage, comme ici-bas (2012)—he continued to work on his monumental sculptures. There was nothing new about this; in 1989 he was already preparing his project for the Place d’Assas in Nîmes, as well as Sol et Colombe, which still embellishes the forecourt of France’s Economic, Social and Environmental Council on the heights of Chaillot, in Paris. His oeuvre is marked by two manners: a kind of fa presto for the light-heartedness of the little playlets and a more exact form of anatomical realism for the statues and their symbolic or mythological dimension. And rather than sculptures, he speaks of his “statues”, seen as a familiar throng.

Like the tapestry weavers of the Middle Ages, Raysse built up a repertory of faces, which he added to over time; faces that recur from one work and one medium to another. The same models and moulds are used with slight nuances, as in the figure of Liberté chérie: a shirt or an accessory added or removed, socks, a hat, a fig leaf or a cockerel—they vary the spirit of each work and give rise to fresh creations.

Raysse’s sculptures bring a free hand to matters of size and scale. That teetering dancer, a few centimetres high— we spot her again in another small piece, one leg raised and holding a green plastic arrow, and in the young giant of D’une flèche mon cœur percé (2008). It is often the small sculptures that serve as a starting point for the large-scale statues. There are sketches, too, that enable him to fine-tune his compositions; some of them were included in his exhibition of drawings at kamel mennour in 2017. As a rule he works from models, getting clay enlargements made that he then reworks himself.

There follows consultation with the caster of his bronzes regarding the choice of patina: sometimes very dark, as for the face of Nemausus (1987); a glossy silver for Rik de hop la houppe at the mk2 Bibliothèque multiplex; and more recently the golden sheen of Actéonne (2019). One of his latest sculptures, Monus (2019), combines bronze, steel and plaster on a scale he had never attempted before: another successful conclusion to years of unflagging experimentation. At this point, though, the work is often still unfinished: the statues of antiquity were painted. So it’s not uncommon, the day before an exhibition opens, to find Martial Raysse adding a necklace, a stroke of red on the lips, colour for the feathers of a cockerel, a dab of nail polish on fingers or toes. And at last the works are ready to go dancing.

Born in 1936 in Golfe-Juan (France), Martial Raysse lives and works in Issigeac (France). Former member of the Nouveaux Réalistes, he is a major and historical figure of contemporary art in France and abroad. Great exhibitions have been dedicated to him in the last years, notably a retrospective at the Centre Pompidou in 2014 curated by Catherine Grenier and also in Venice at the Palazzo Grassi – François Pinault Collection curated by Caroline Bourgeois in 2015. His works have been part of the collections of various institutions: the Centre Pompidou and the Musée d’Art Moderne de Paris, the Museum Ludwig and the Wallraf-Richartz-Museum in Cologne, the S.M.A.K. in Ghent, the Moderna Museet in Stockholm, the Montreal Museum of Fine Arts, the Hirshhorn Museum and Sculpture Garden in Washington, the Louisiana Museum of Modern Art in Humlebæk and the Menil Collection in Houston.