Nothing from me
Stolen everything 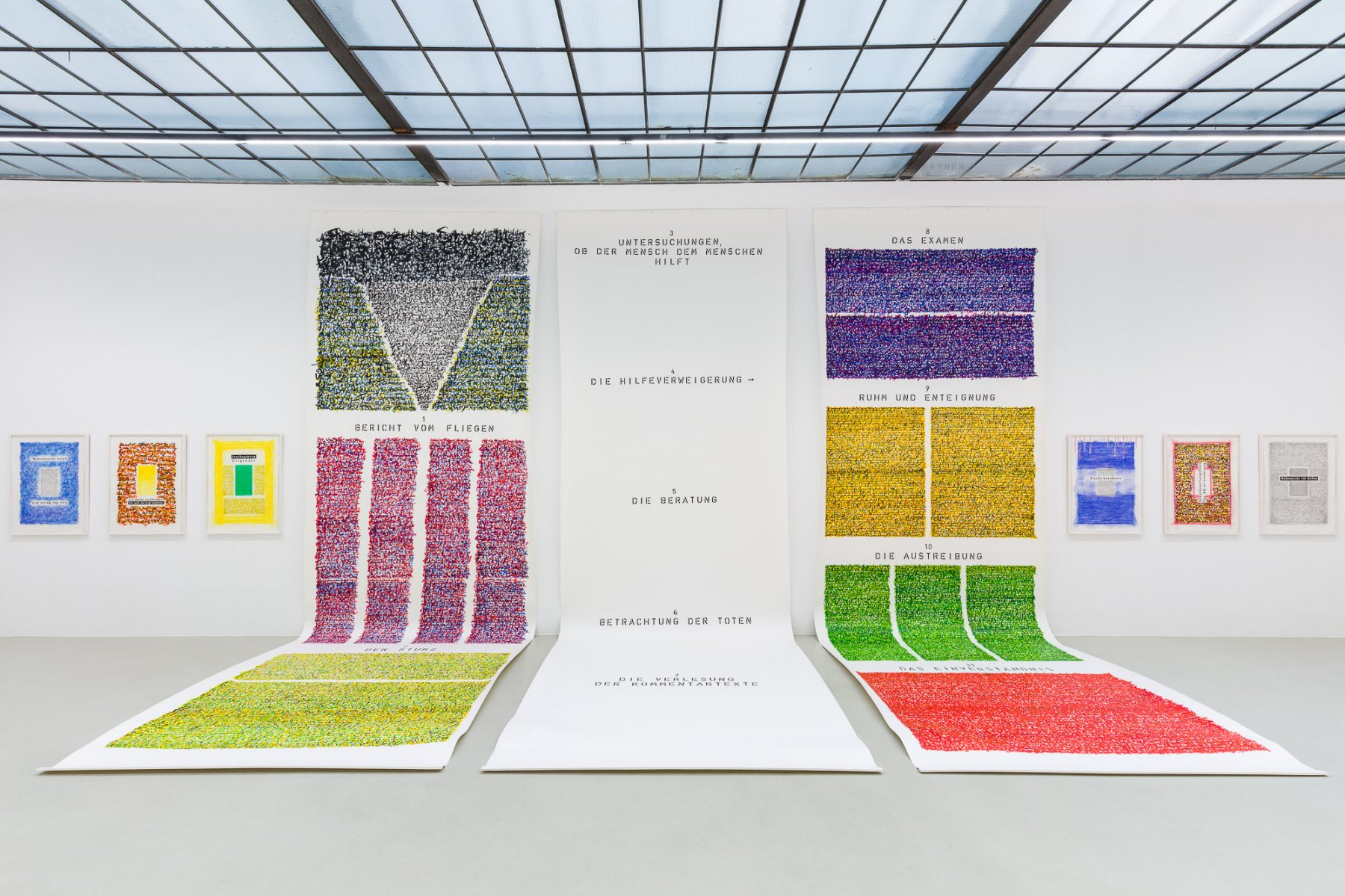 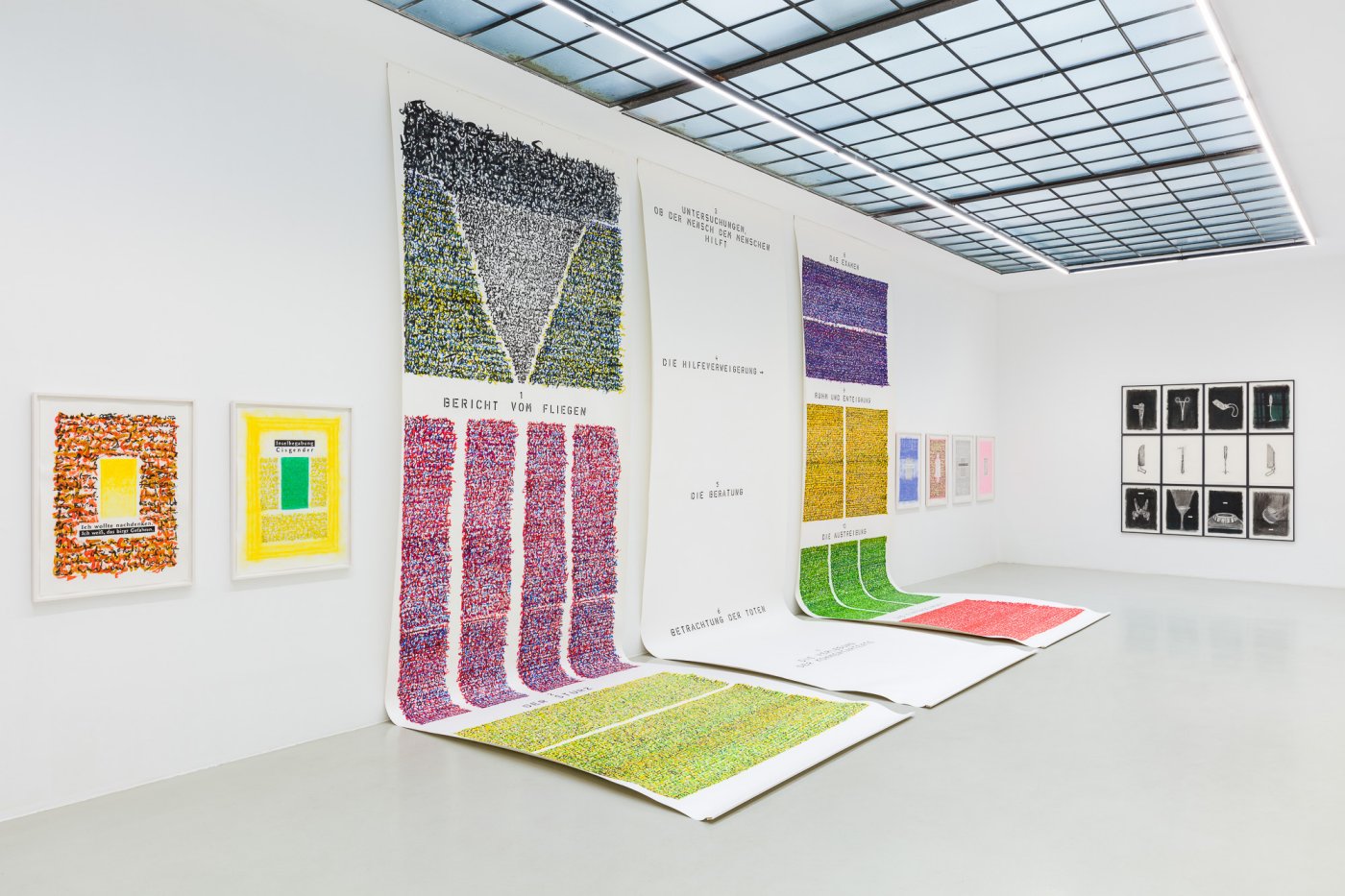 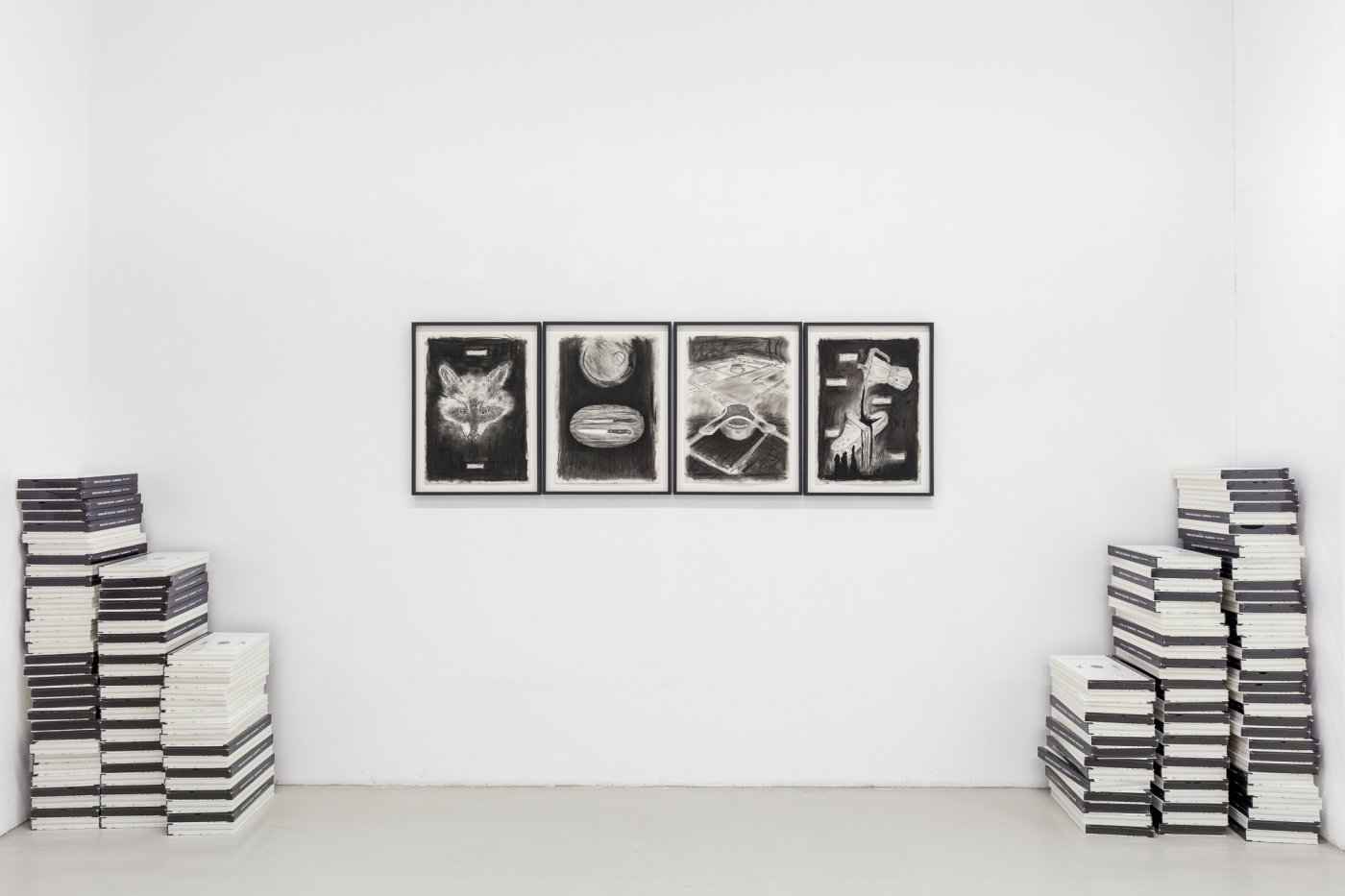 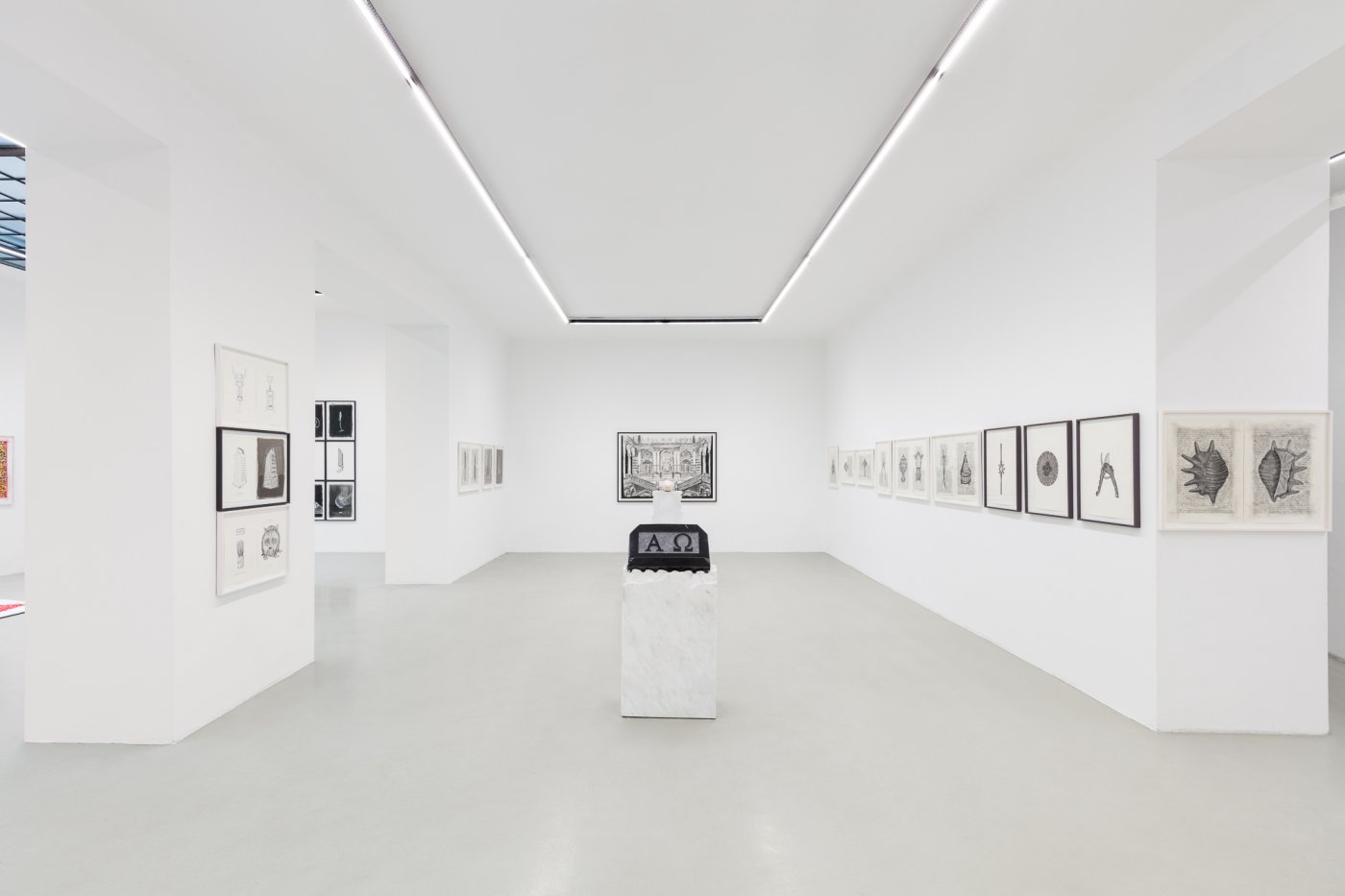 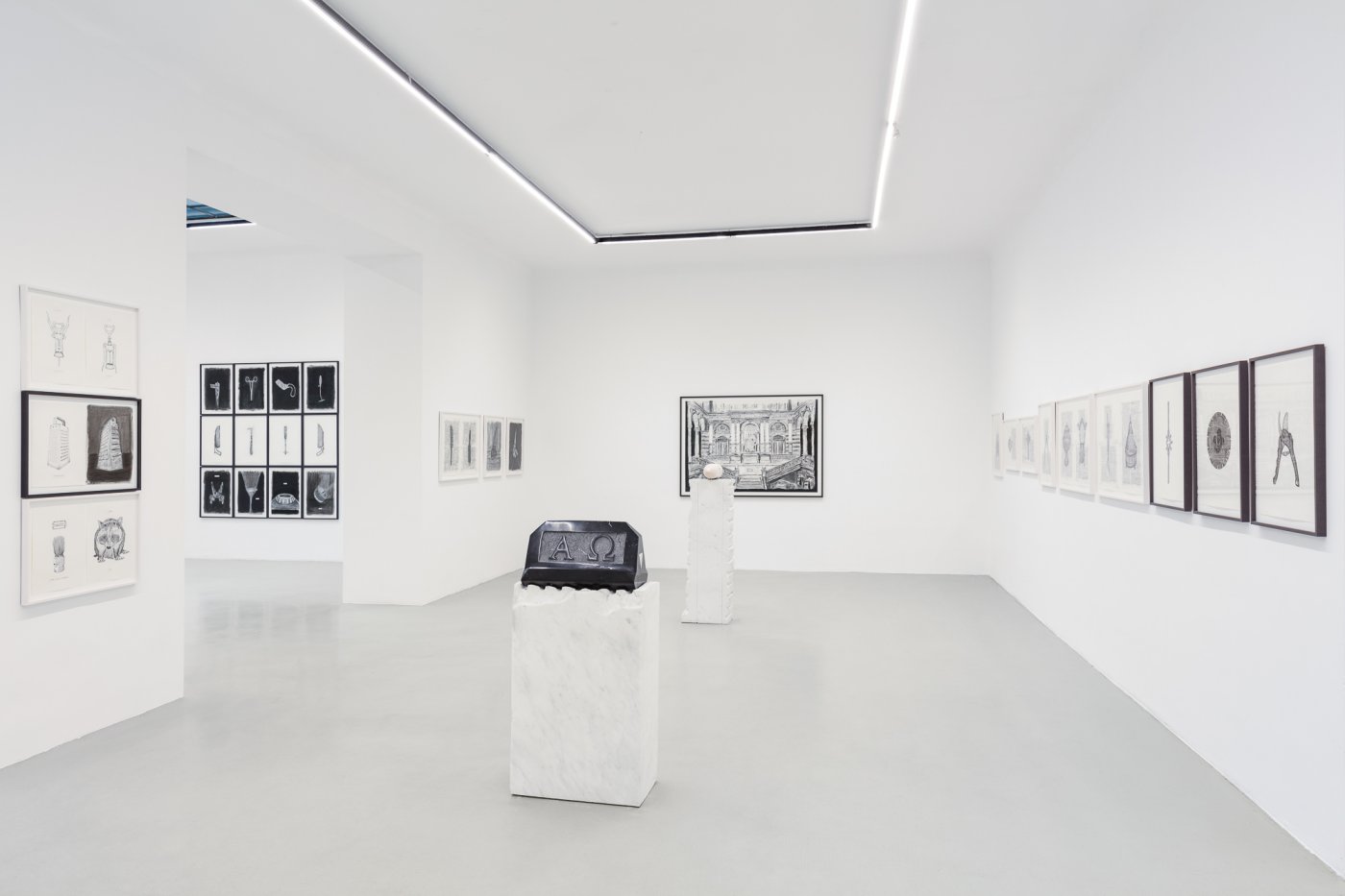 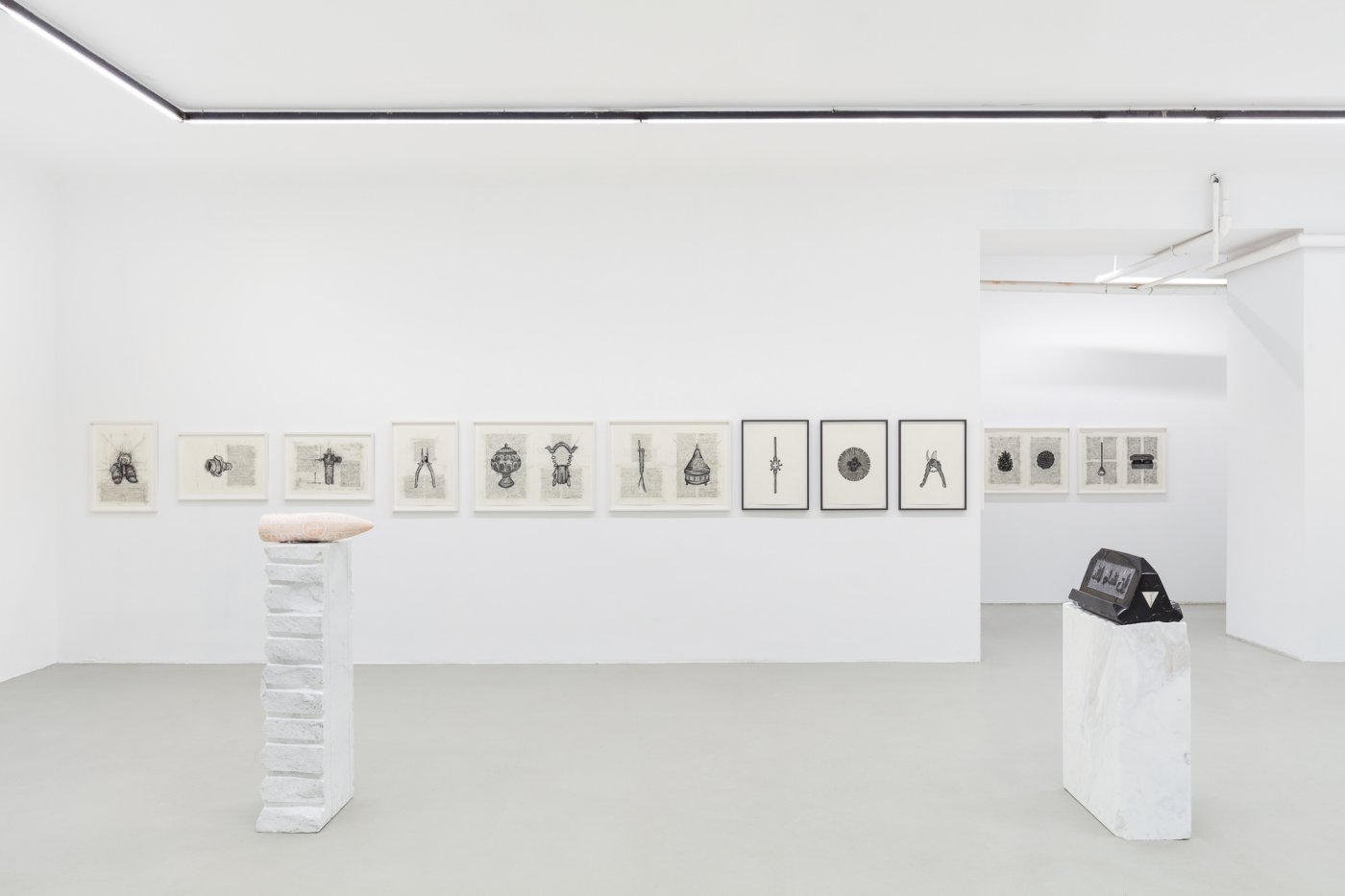 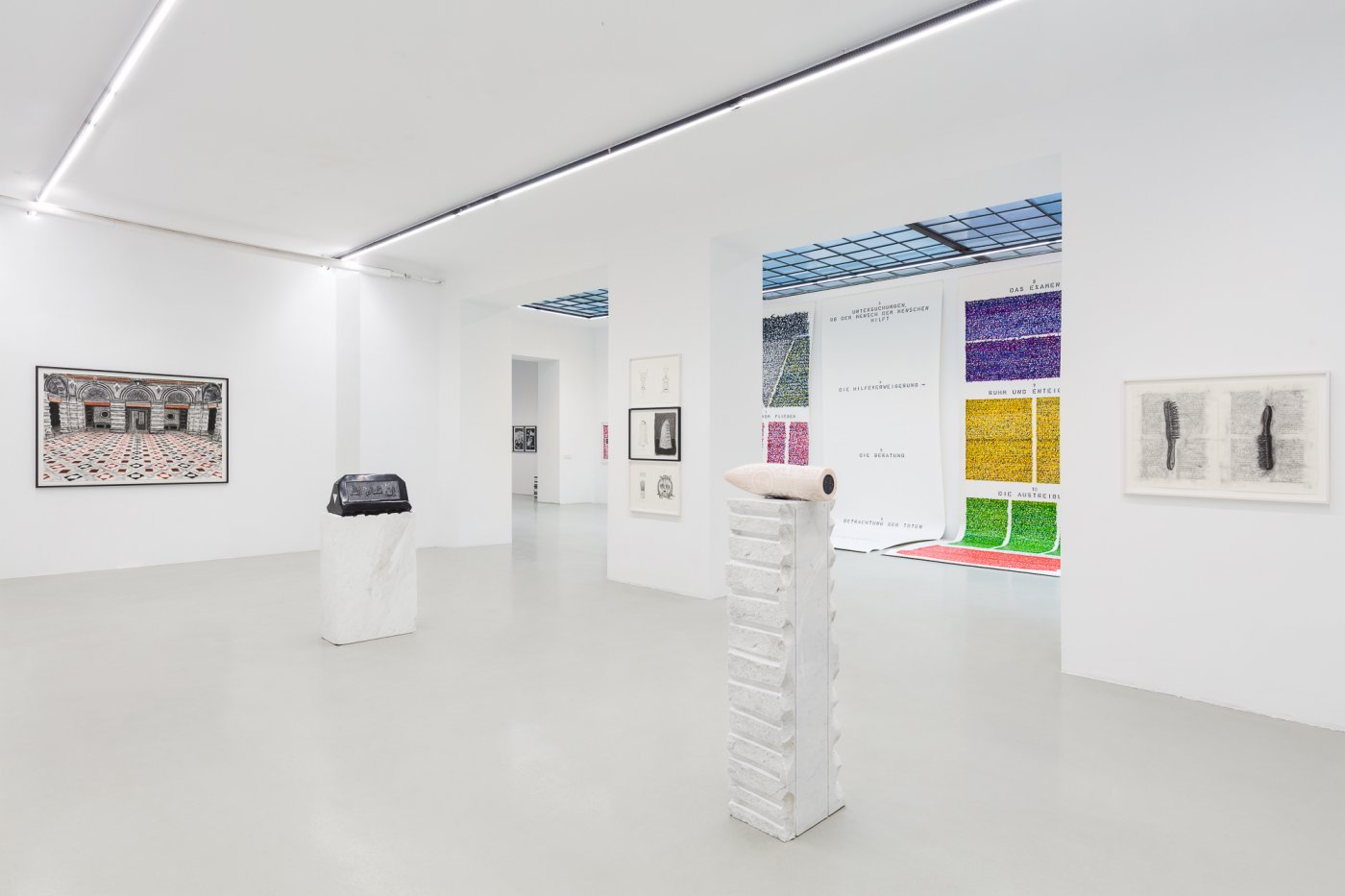 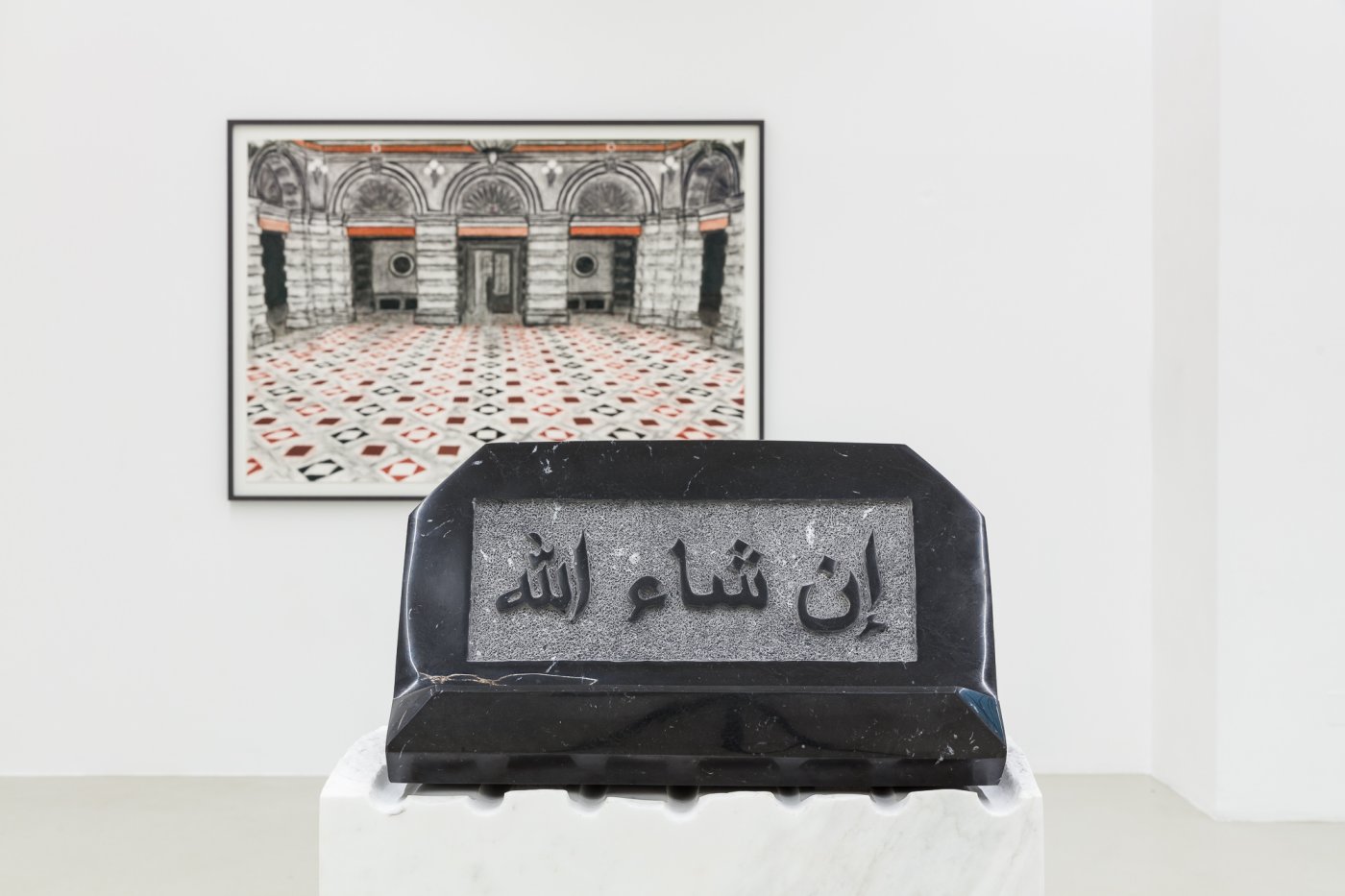 The title of the exhibition ‘FLUSSMITTE’ refers to the art book ‘Flussmitte Porträts der Dinge’ which was recently published by Markus Redl. It contains drawings made over five years (2015-2020). A large part of these drawings originates from the period of the first two lockdowns in 2020, during the pandemic of CoVID19 and its aftermath. They are documents of the time, and a journey in a confined space; one’s own living space and the way to the grocery store, combined with texts, through which another journey takes place, without much spatial movement. In these cycles of drawings language, text, space are compressed, layered on top of and within each other.

The exhibition presents a selection of the various cycles of images. After the publication of the book ‘Flussmitte’, Redl started working directly on the follow-up volume Flussrand I. It started with extensive research on Bertolt Brecht, which resulted in the Brecht-Zyklen I and II, as well as Der Ring-Zyklus I. These works are based on questions regarding political and social measures in a society, which affect the individual as well as the whole community. Questions that naturally arise from situations in a pandemic, as well as from the consequences of climate change, which also affects the whole human community. The drawings incorporate text fragments from authors who were studied in the course of the research. (Aleida Assmann, Italo Calvino, Heinrich v. Kleist, Thomas Bernhard, Franz Kafka, Antonia Birnbaum, Heiner Müller, Andreas Reckwitz, Peter Weiss, Ilija Trojanow, and others).

In addition to drawings from his publication Flussmitte, stone sculptures complement the exhibition. Here, Redl’s sculpture ‘Stein 156-157131 [Wendemittel I]’ combines three types of European stone (from Italy, Belgium, and Portugal) in the form of a projectile on a tall, square pedestal. The explosive cap inscription EGAL meets its counterpart in the postament inscription ABER. EGAL ABER. ABER EGAL. The order of reading is unclear, the meaning of the other characters around the projectile body invented – whereby they are reminiscent of existing signs from various cultures and epochs. The mixture with characters, which are still in use today, reinforce the impression that they are real sign systems, data sets and messages. Their combination adds conjecture to cultural, spatial and temporal links. Just as ghosts used to arise from the past, they now arise from the future as well, writes Bertolt Brecht in “The Downfall of the Egotist, Johann Fatzer“. In this sense, this projectile could be a relic or a harbinger, could have originated from a great distance, spatial and temporal.

Redl’s sculpture Stein 159-160133 [Wendemittel II] also works with strong signs systems. The starting point for the form were the purposes of the ambon (“table of the word”) and the rahle (derived from the Arabic word for “saddle”). In both cases, in the Christian and Muslim world, it is about the reception and reproduction of the written word as a central event. On one side, the ancient Greek letters alpha and omega, representative of the Christian narrative of beginning and end, rise from a ground, carved with the finest iron, while on the other side the Arabic lettering for In sha’Allah rises. A statement that has become an idiom. An idiom in everyday life, used across denominational lines, by Jews, Christians and Muslims alike. The starting point or end point of reflections on possible statements of the signs is not pre-drawn by the sculpture in favor of a single interpretation, but manifests in its materiality the simultaneity of antagonisms. Even more, it reflects the condition that confronts groups and individuals within a pluralistic society with the mammoth task of having to learn to live with diversity and contradictoriness.

Markus Redl (b.1977 in Klosterneuburg, Austria) lives and works in Vienna. Before studying at the University of Applied Arts, Vienna in Erwin Wurm’s class, Markus Redl studied psychology with a focus on criminology at the Juridicum in Vienna.