I think of the painted picture as an embodiment of the very problem we face with the notion of “reality.” The problem or question is, which reality?
—Mark Tansey

Gagosian presents an exhibition of paintings and drawings by Mark Tansey, representing more than six years of work. The exhibition at 980 Madison Avenue in New York features one new painting—Xing (2021)—three other recent paintings, and a selection of new drawings made in graphite mixed with oil or water. 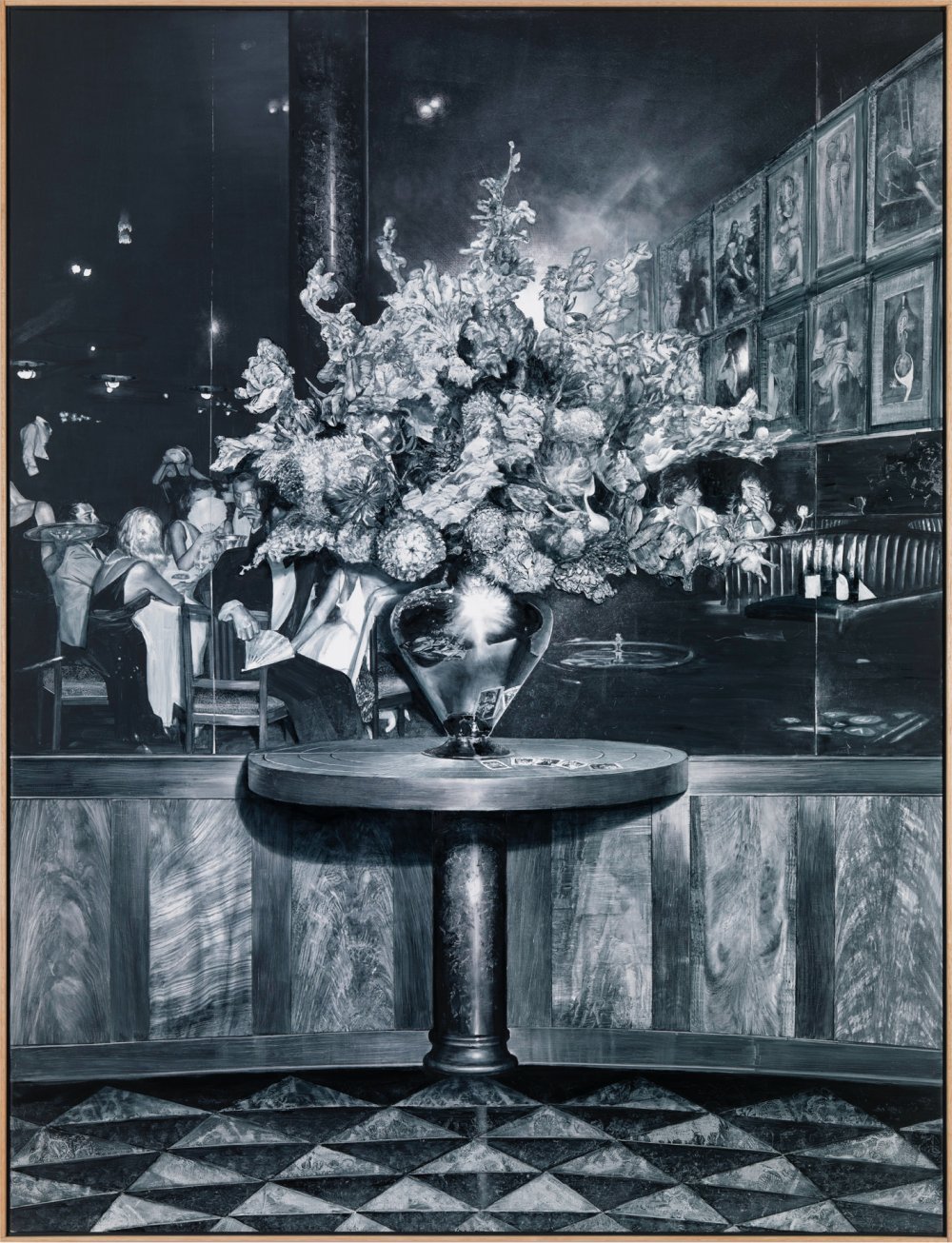 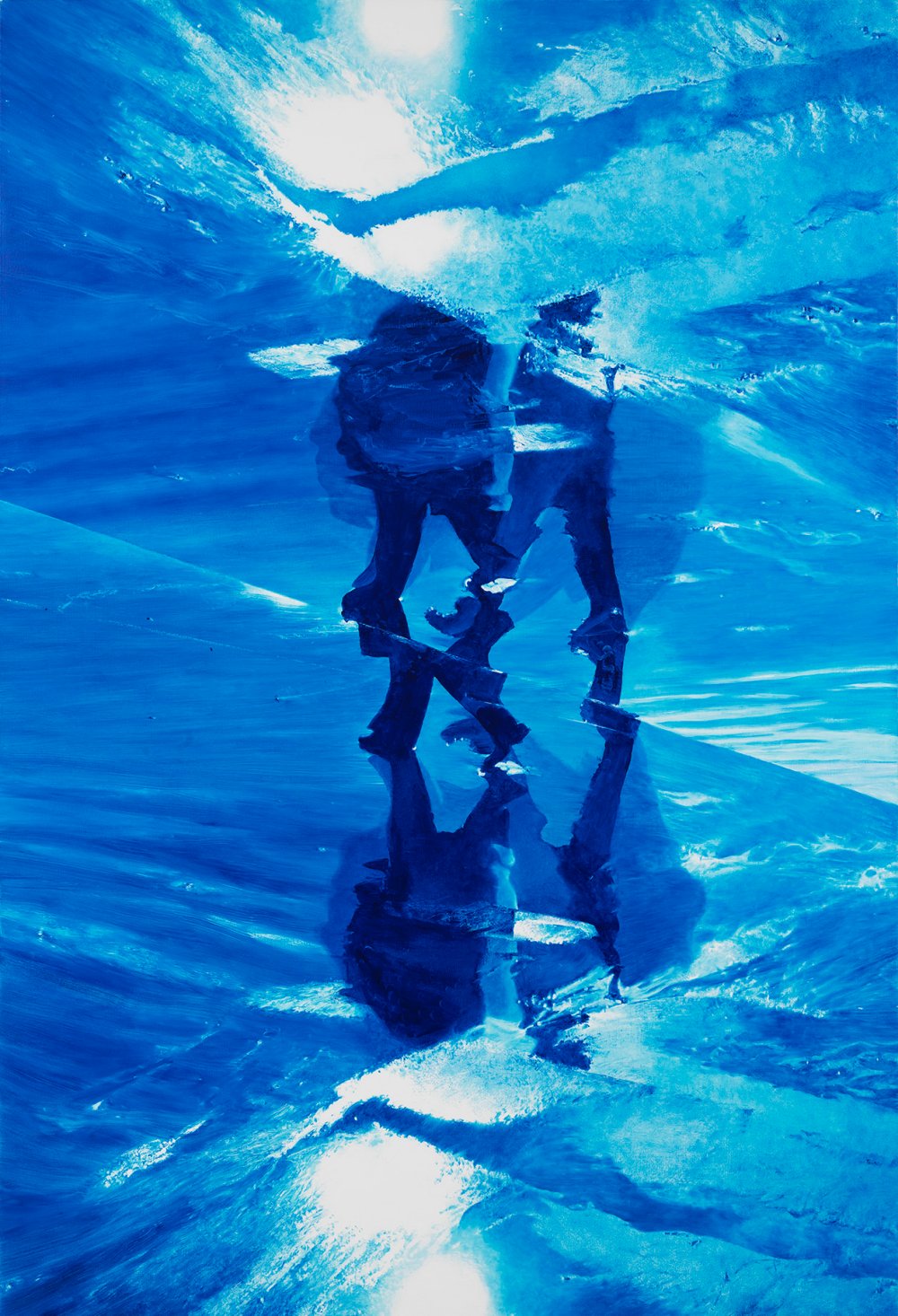 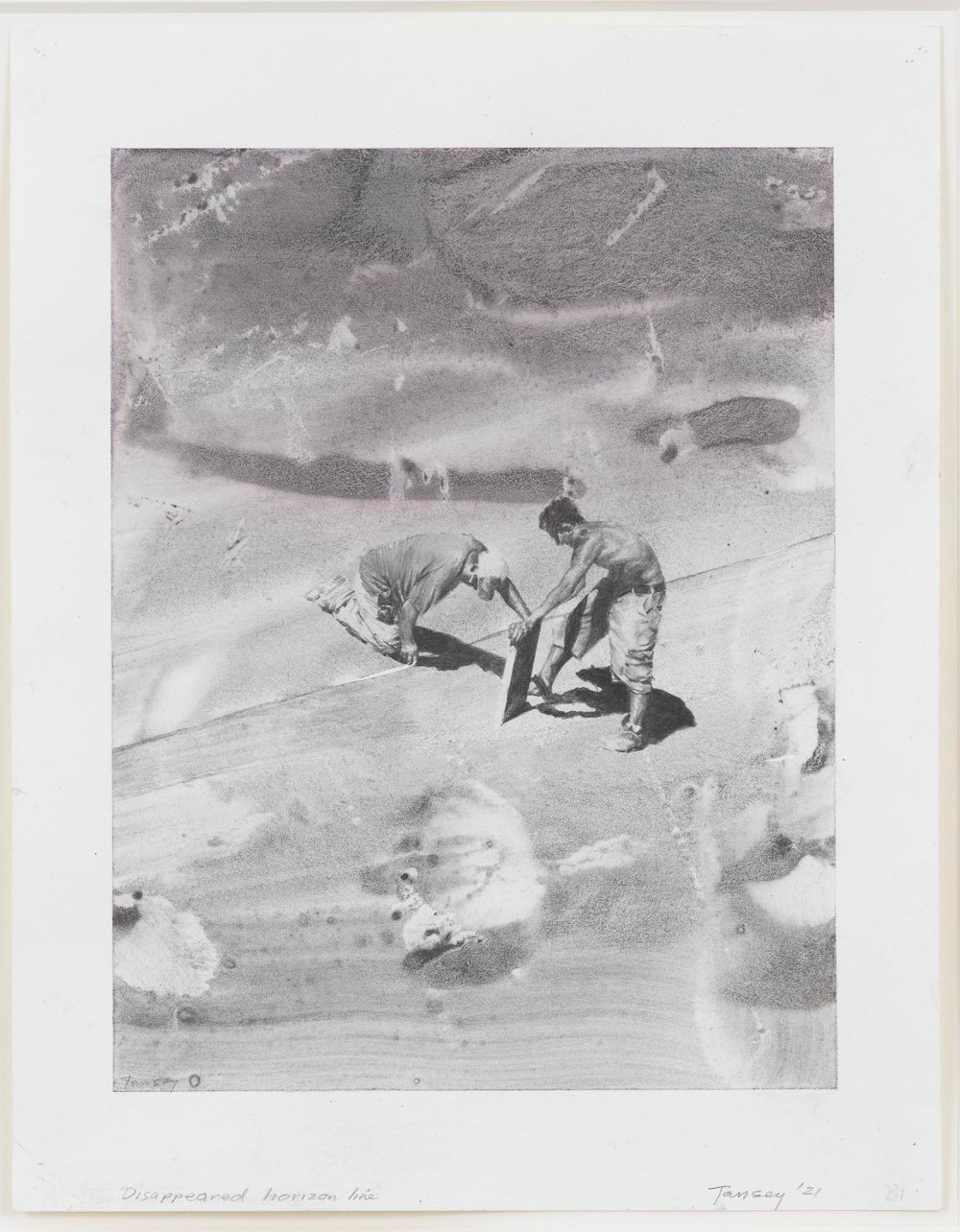 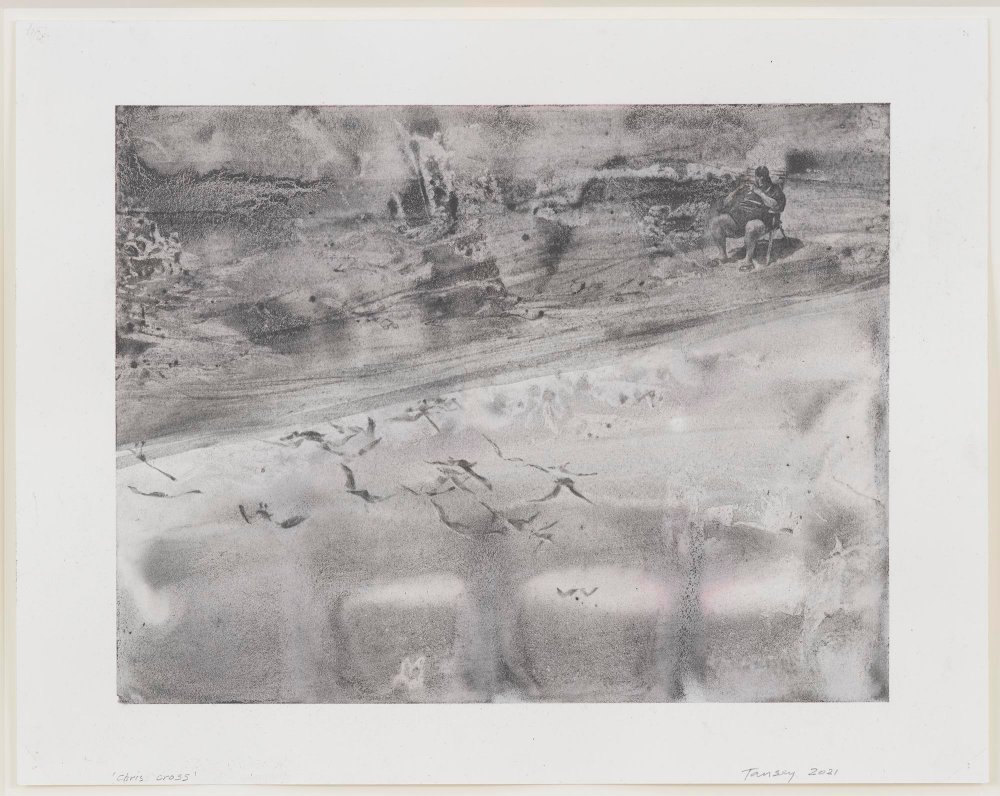 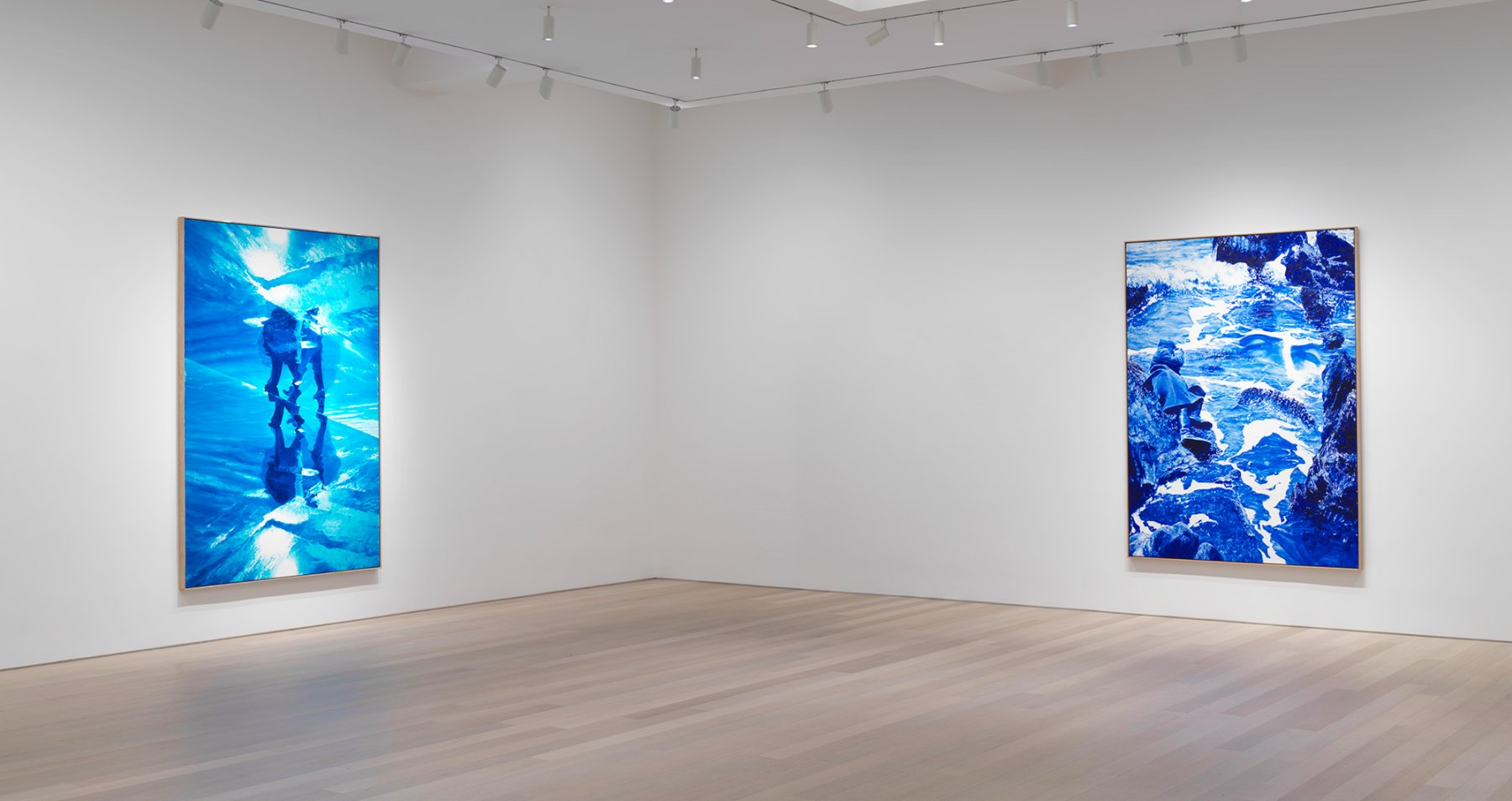 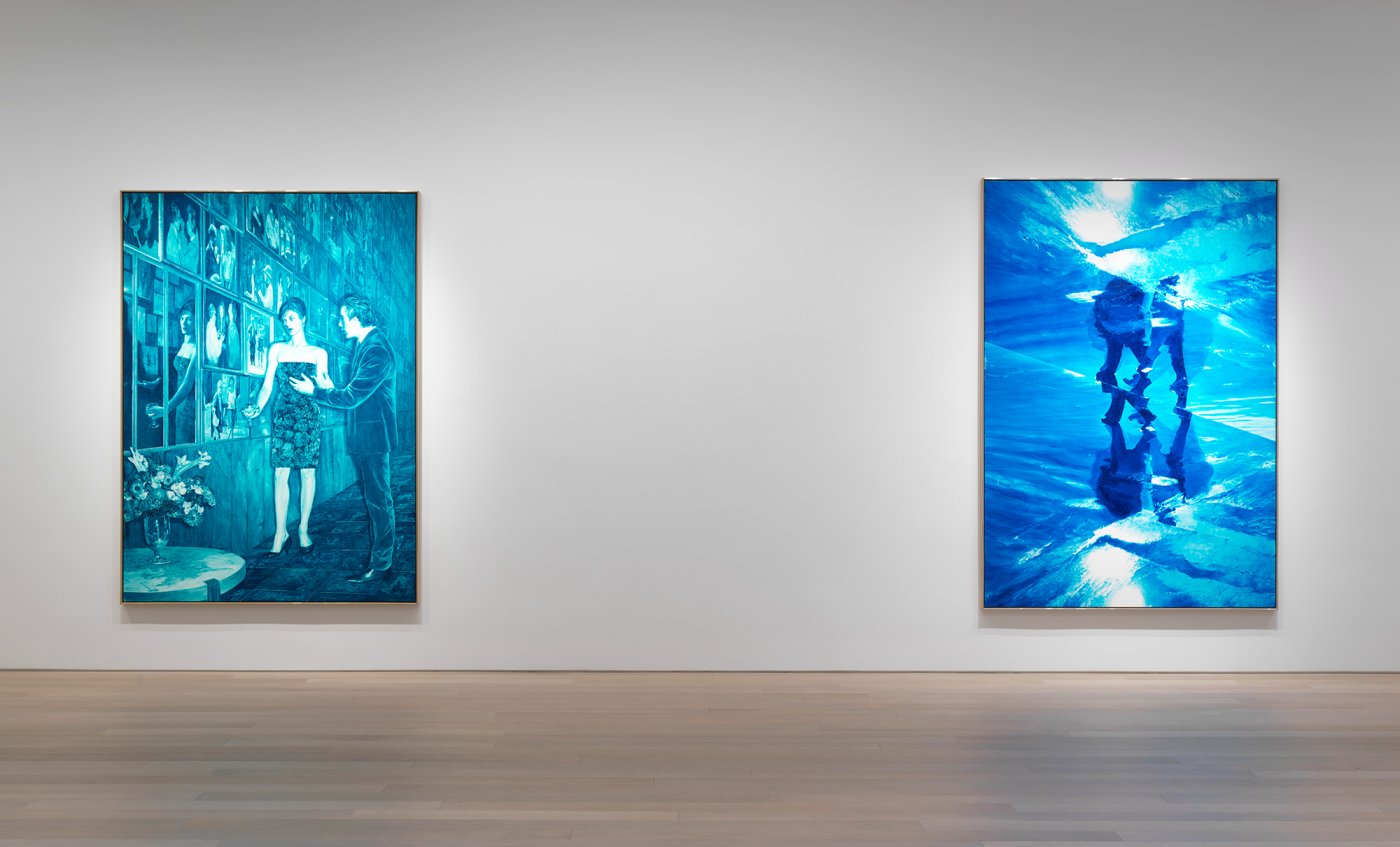 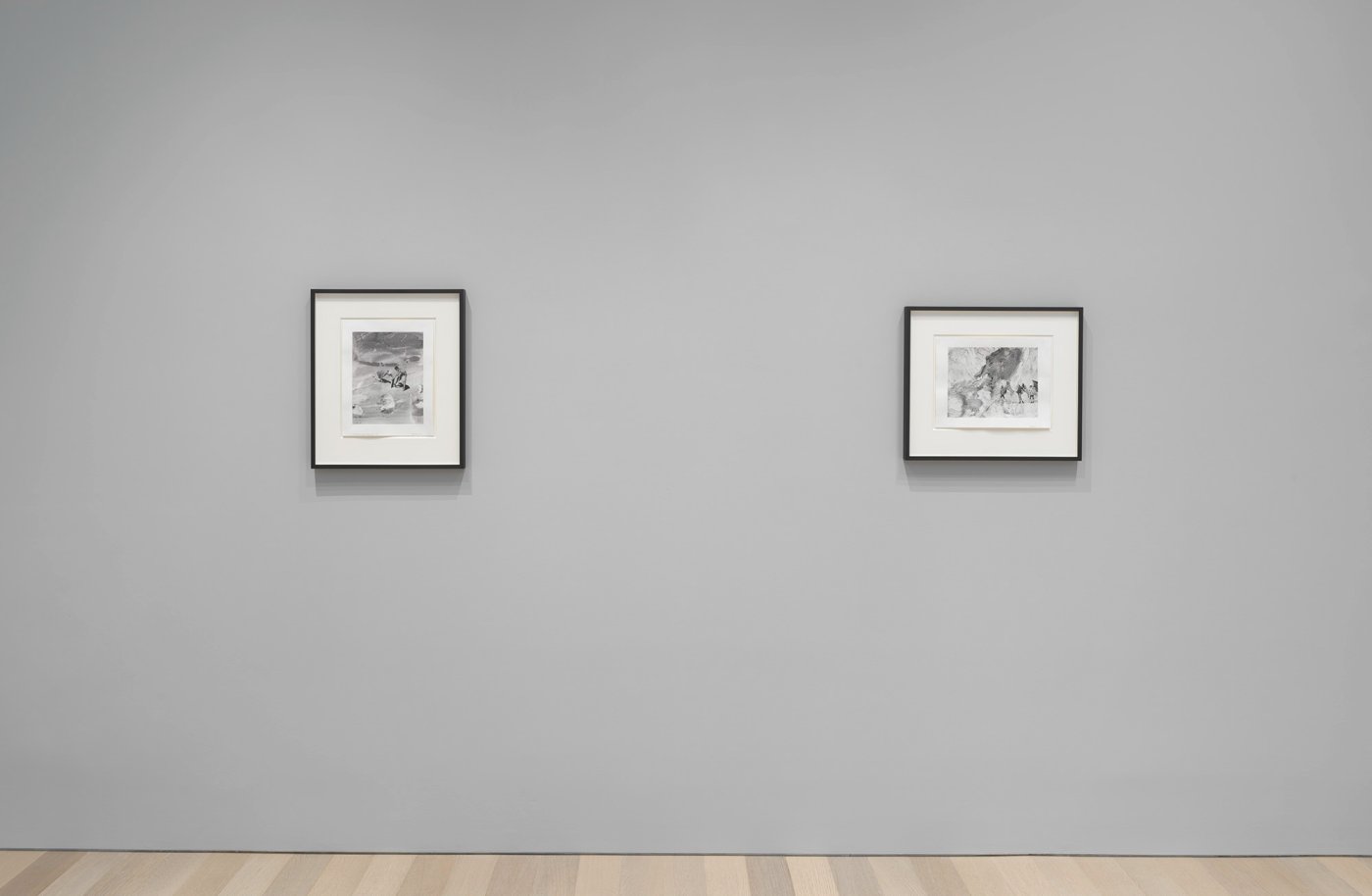 Working within the stylistic conventions of figurative painting, Tansey pursues a fascination with history by layering imagery derived from an extensive archive of printed ephemera, collages, and sketches, often depicting sublime landscapes punctuated by figures or vessels. In detailed monochromatic scenes—since 2004 he has made particular use of blue—he distorts perspective and scale, emphasizing their sensate presence while restructuring our readings of historical period and spatial orientation. Tansey paints using a subtractive process, first priming the canvas with gesso, then painting one section at a time and removing the light passages while the paint is still fluid.

In the works on view, Tansey makes use of complex mirroring and reflection to explore the idea and painterly tradition of the “picture-within-a-picture” and its concomitant splitting and doubling of meaning and association. In Spinner (2015), a lush vase of flowers sits on a table in front of a restaurant wall that reflects a room filled with diners, while in Reverb (2017), a formally dressed man and woman converse in front of an array of portraits of other couples, their own images framed by a mirror in a haunting visual echo that alludes to the title’s aural equivalent. Russian artist and designer Alexander Rodchenko, the individual subject of Resight (2019), lies on a rocky outcrop, training his camera on the morphing waves and eddies that swirl around him, and Xing shows two figures walking together on wet sand, their reflected and inverted images distorted by light and water.

Tansey characterizes the inverted composition of Xing (pronounced “crossing”) as further emphasizing the expressive potential of reflection and shadow. He notes that the mirroring it depicts—through which the work’s physical subjects (as opposed to their reflections) are absented—has parallels in Jacques Lacan’s concept of the “mirror stage,” and in the provocative notion of what Tansey calls “a reductively purified art.” Xing incorporates multiple visual modes and methods, and features an isometric perspective, making for “a two-way picture (up or down—right or left) depending on your spatial or political orientation.”

The exhibition also includes new drawings derived from imprints made with crumpled newspaper in liquid graphite, which suggest illusionistic representations of sand, snow, clouds, waves, and rocks. The unique molecular behavior of the graphite combined with the spontaneity of the technique generates base images comparable to Rorschach inkblots, from which multiple possible interpretations may emerge. Introducing deliberately drawn dry graphite figures and other variables such as shadows and reflections, Tansey then reframes and transfigures the works’ grounds to become what he refers to as “sites or situations.”