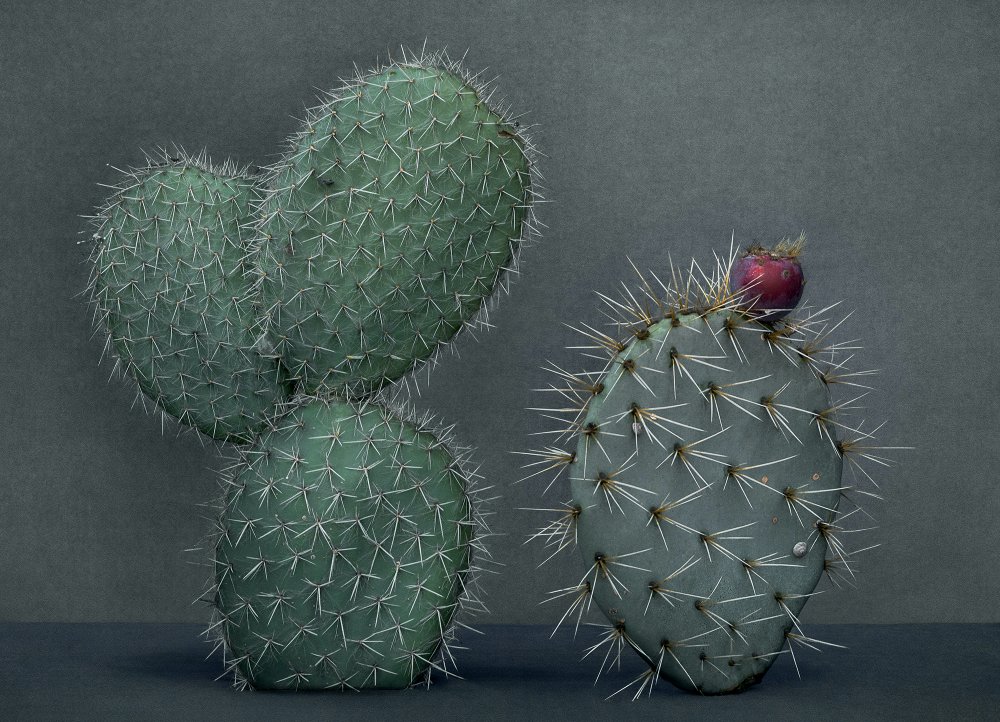 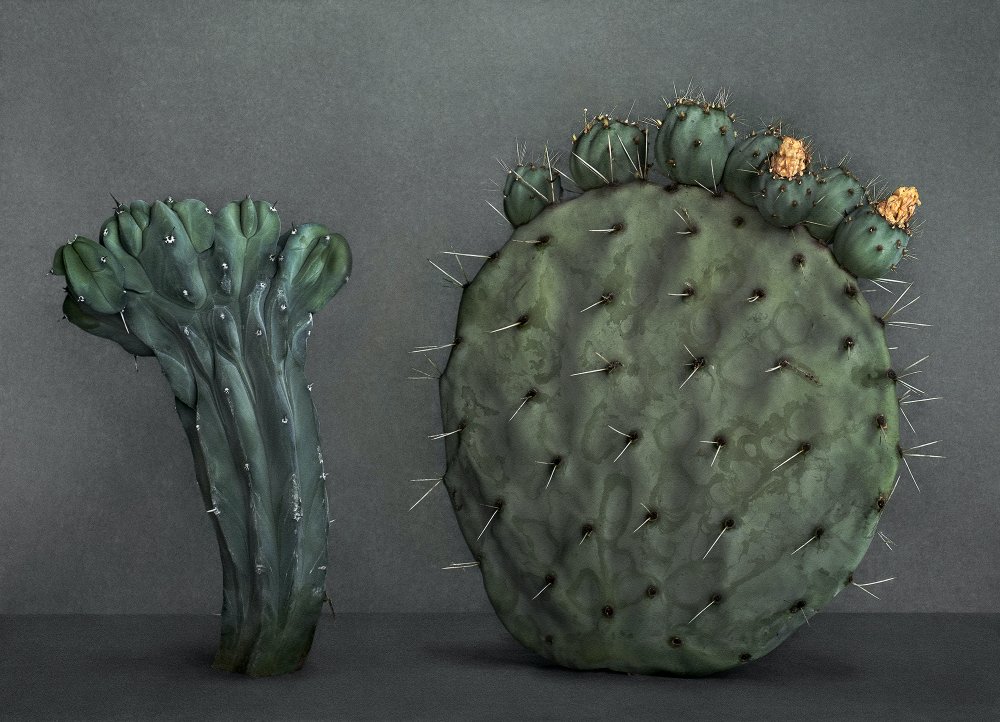 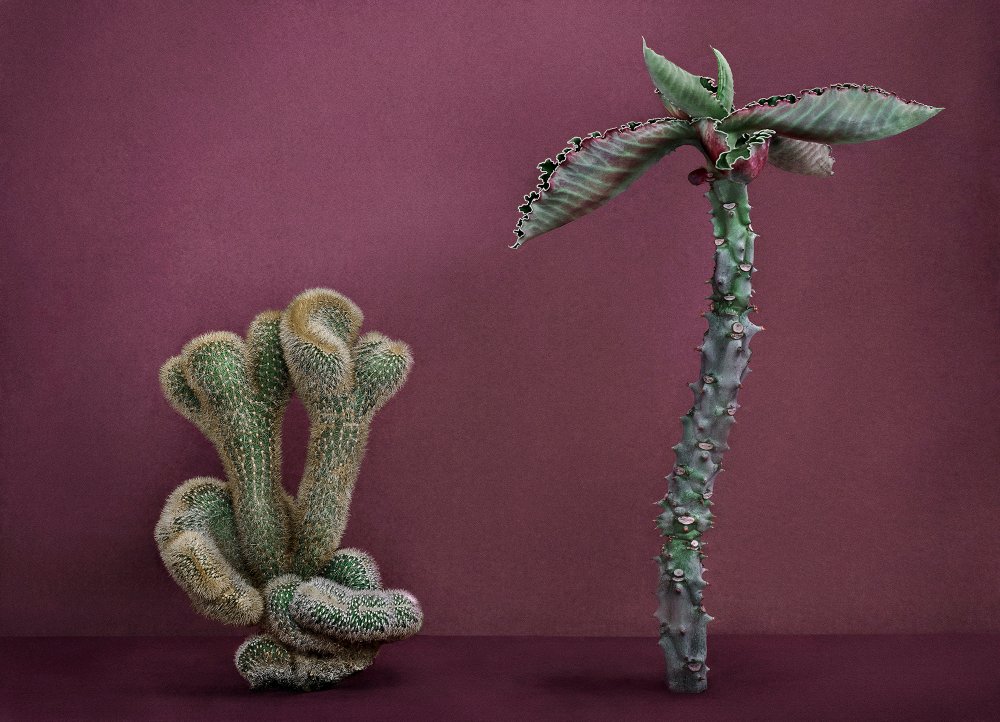 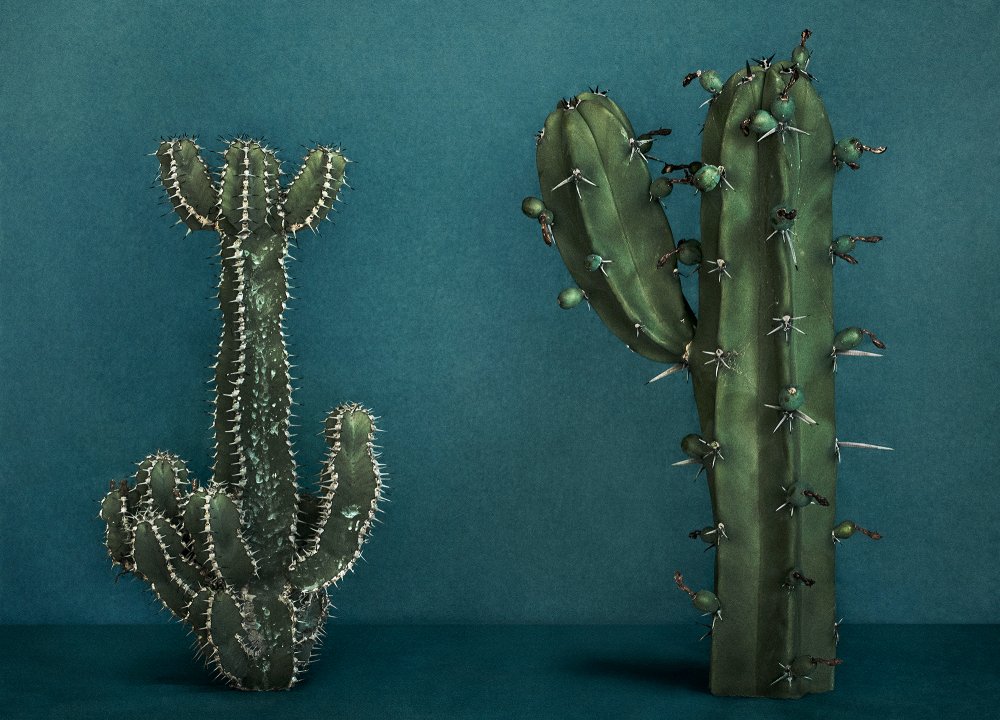 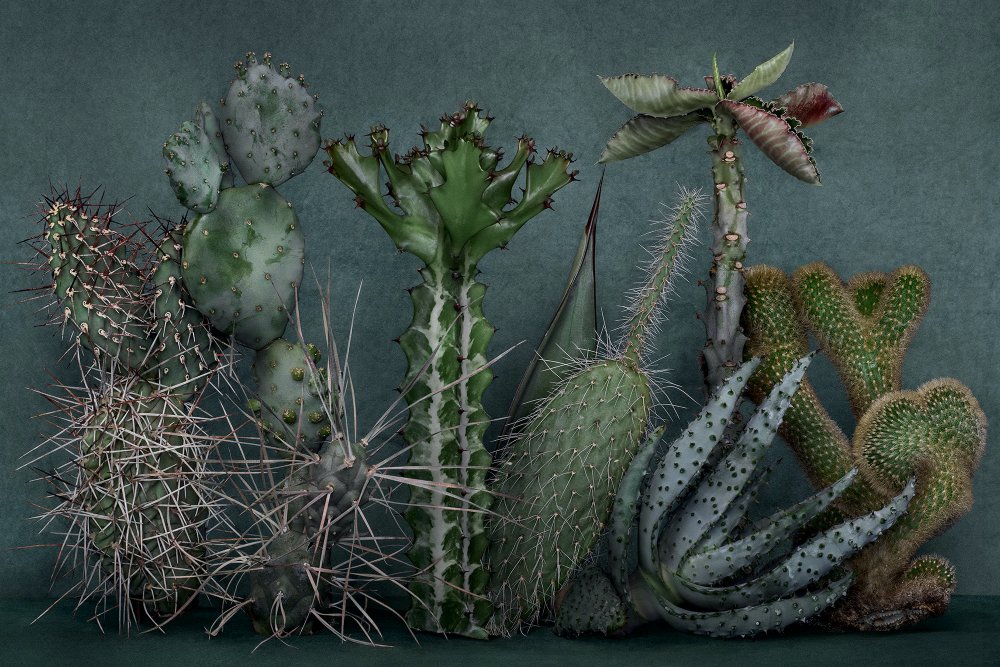 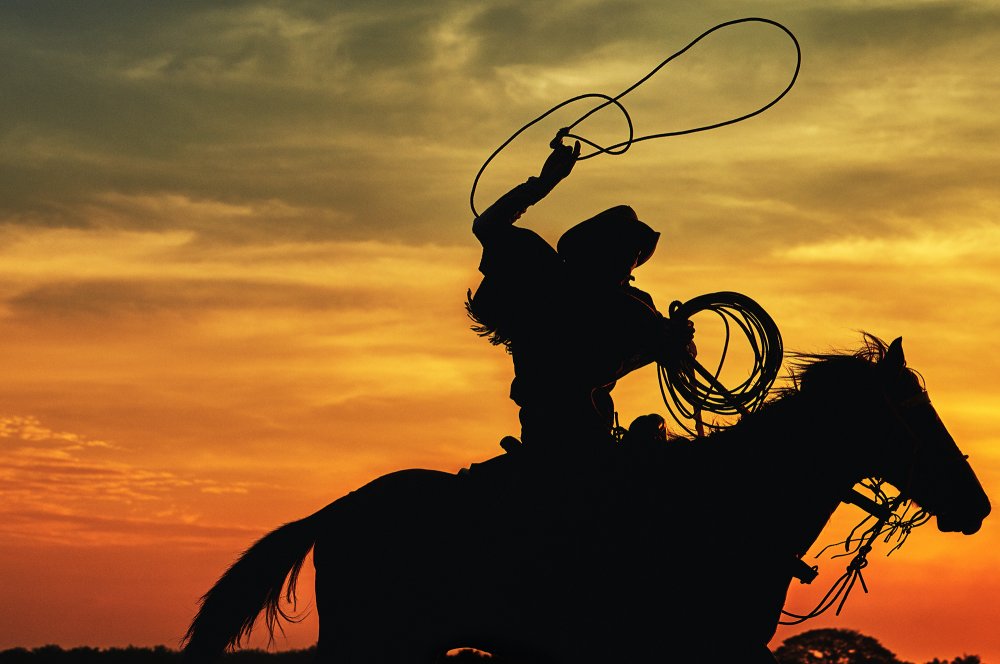 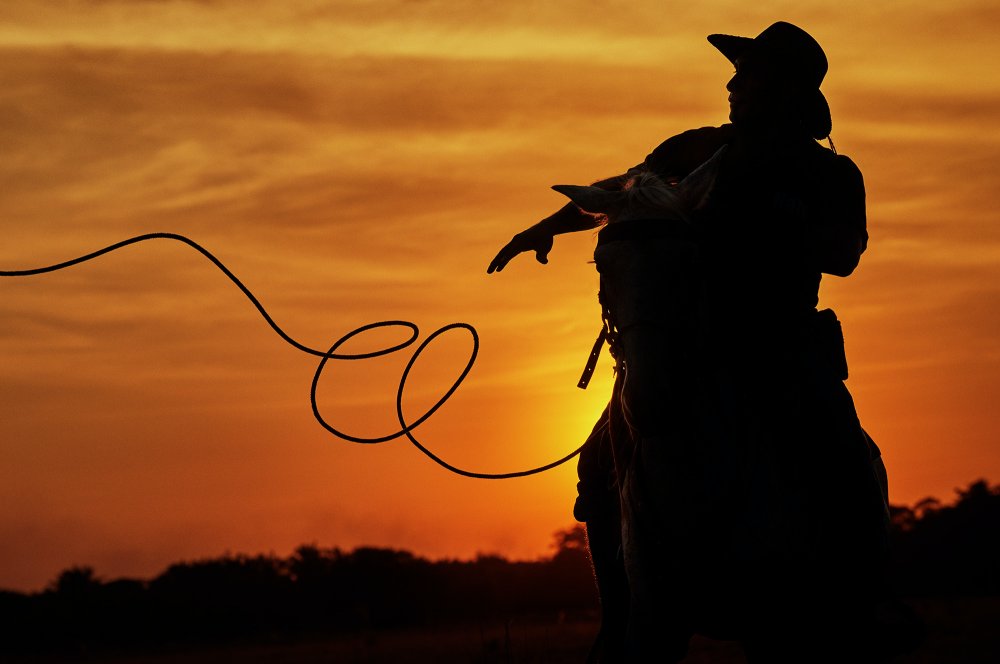 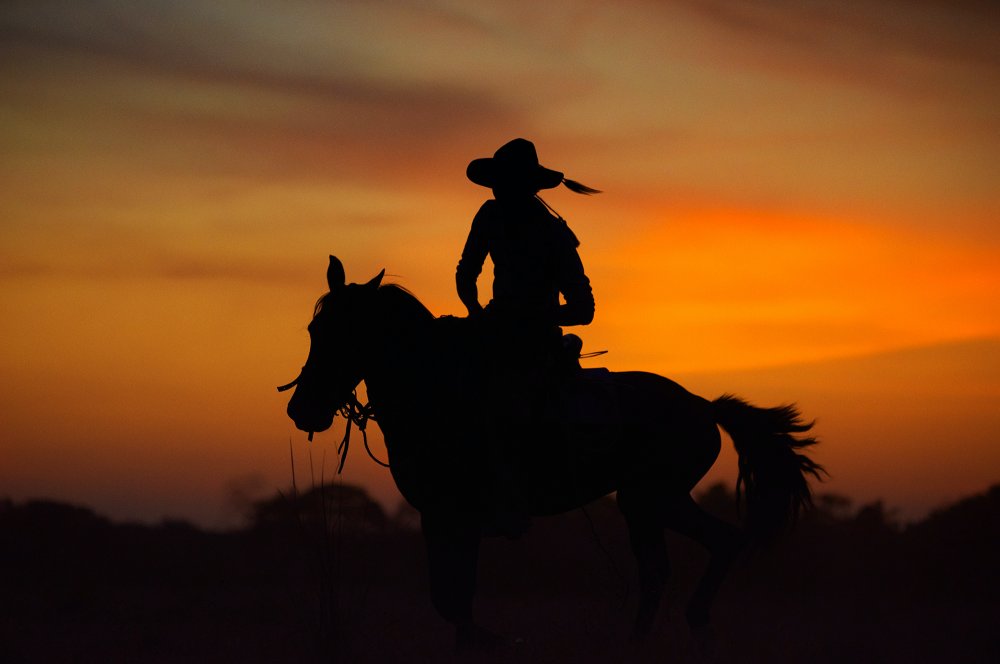 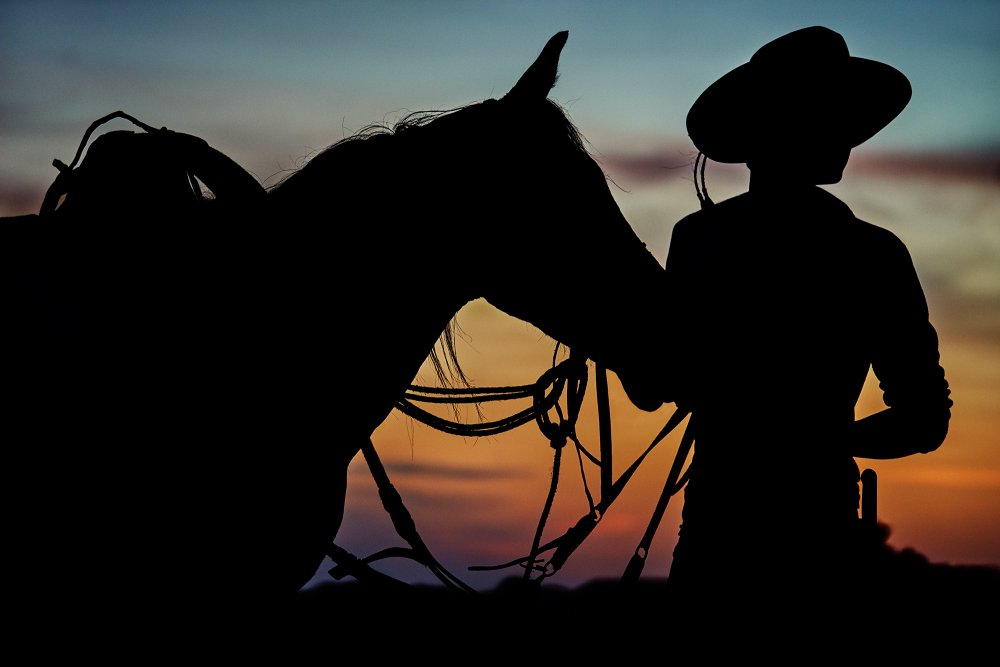 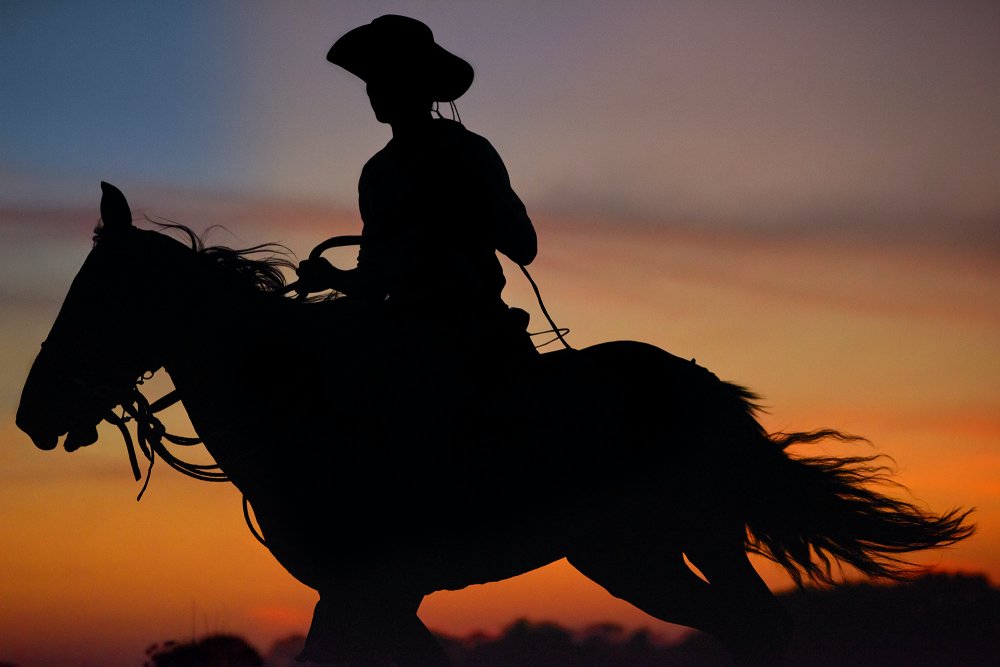 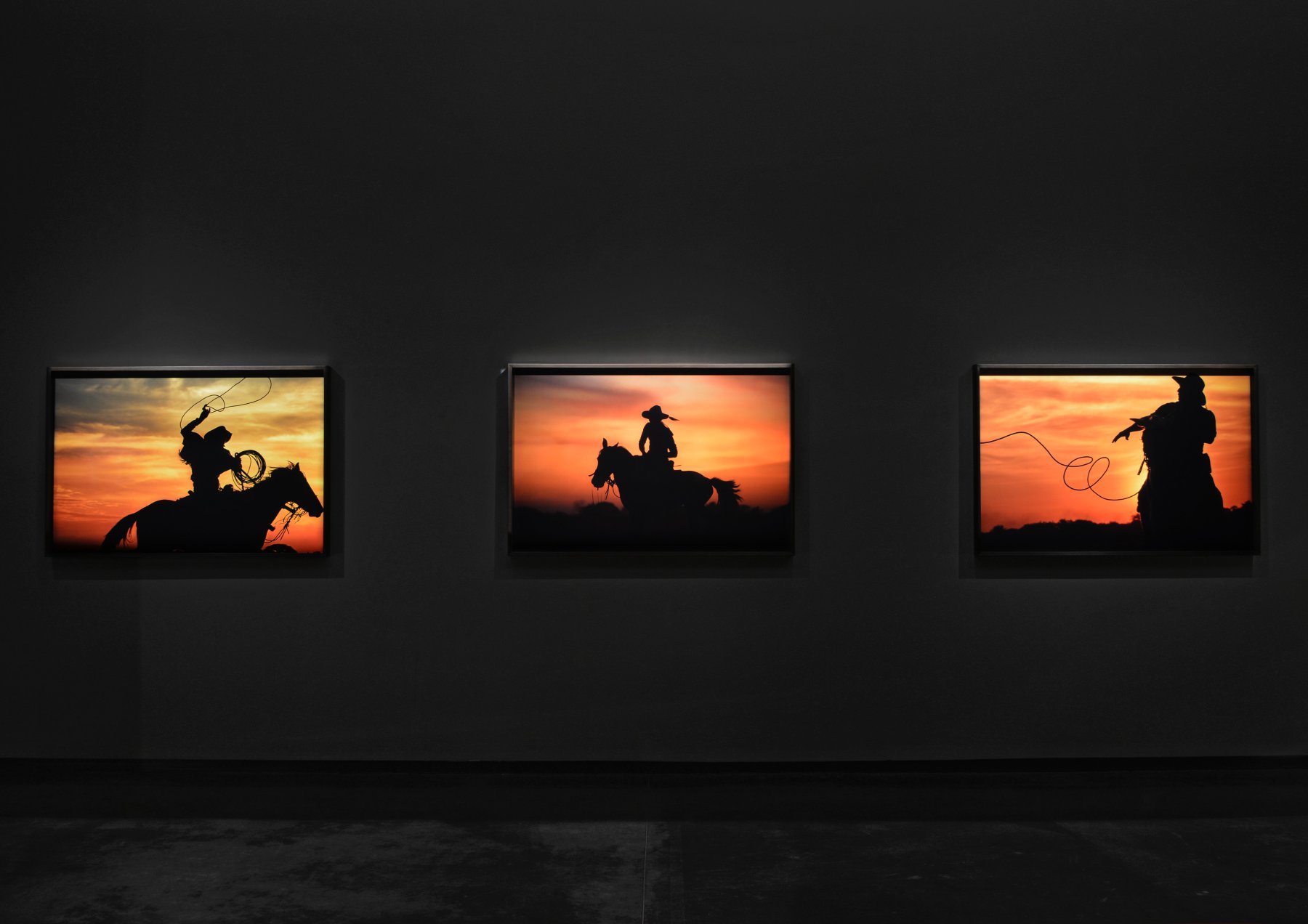 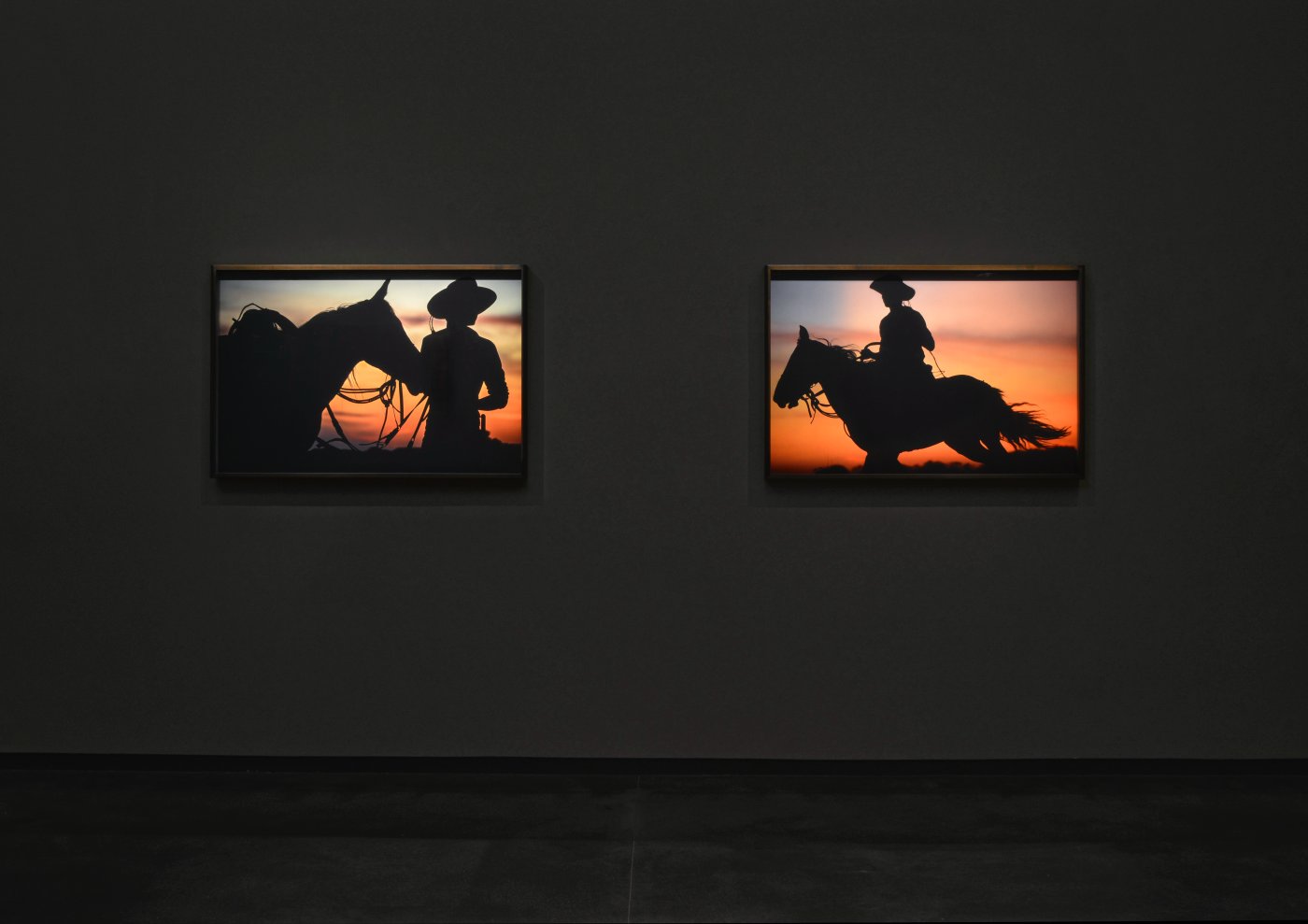 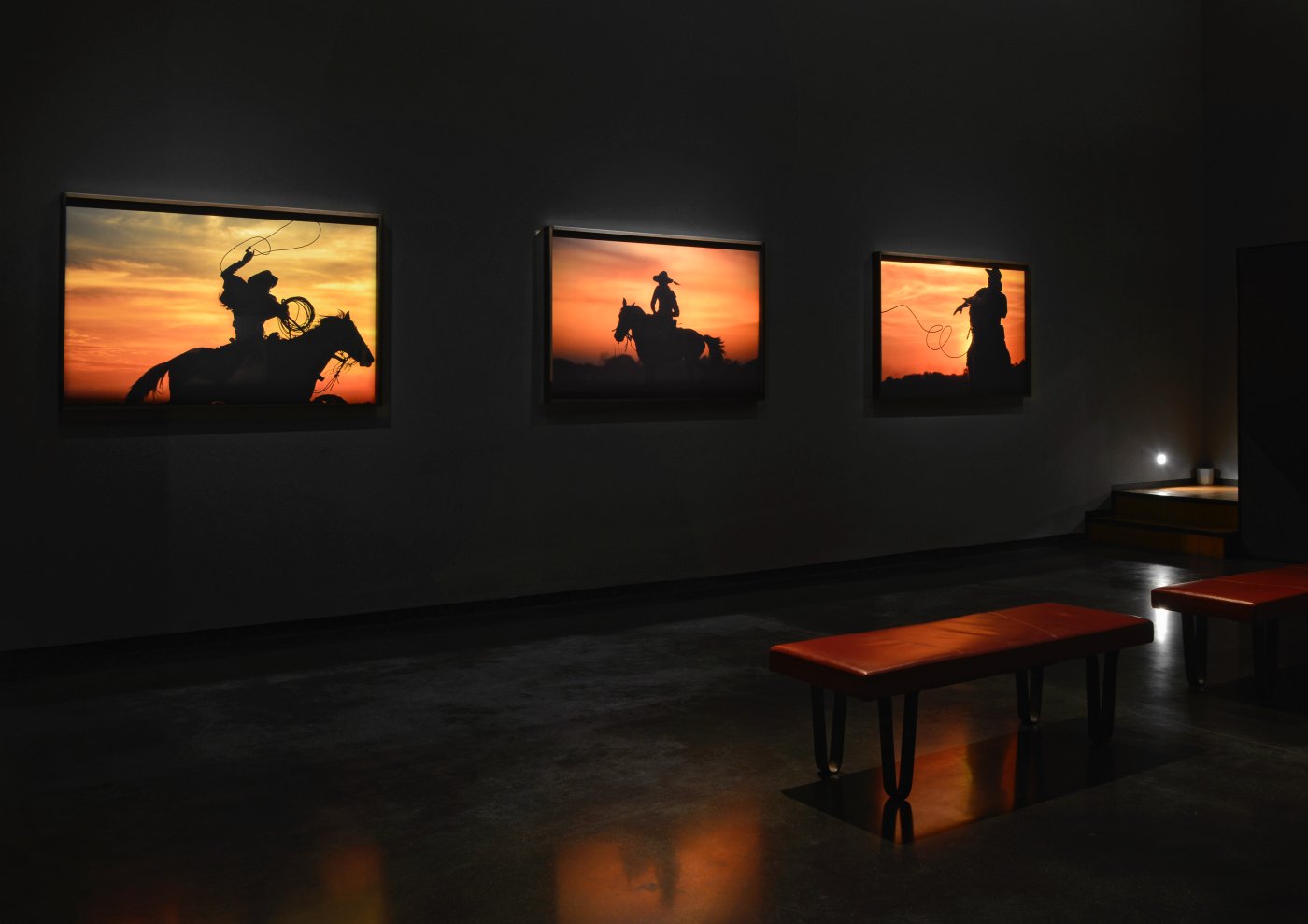 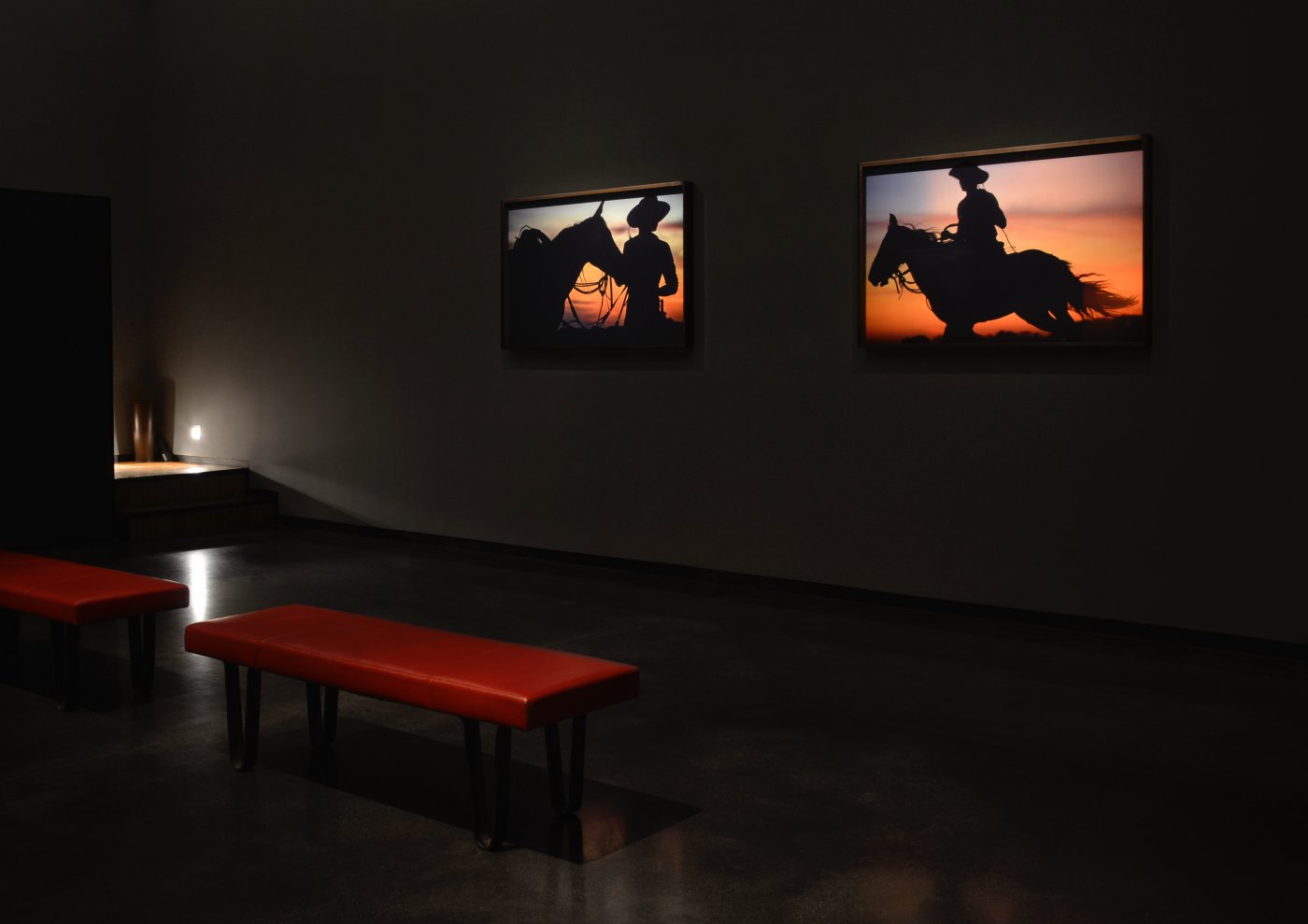 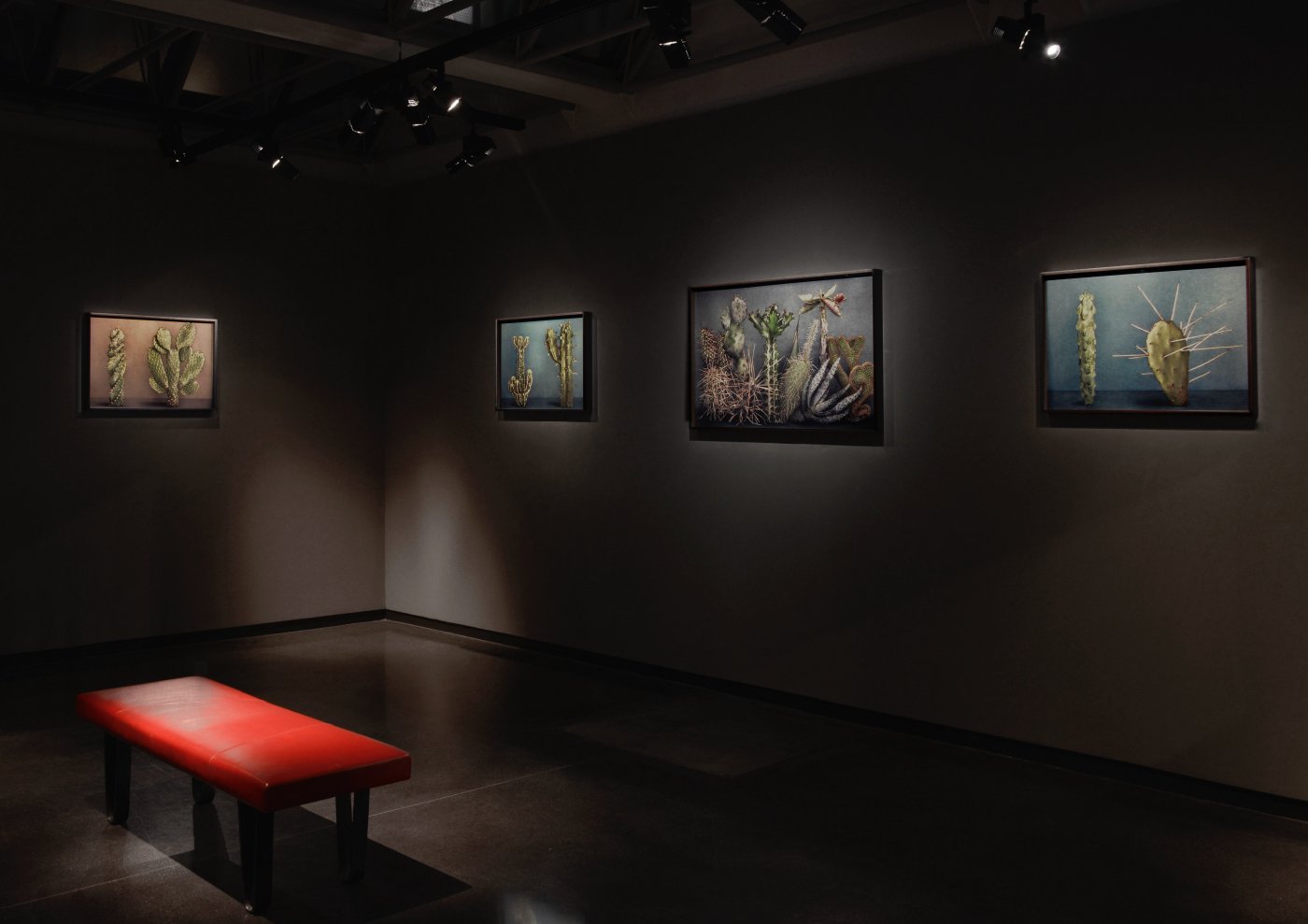 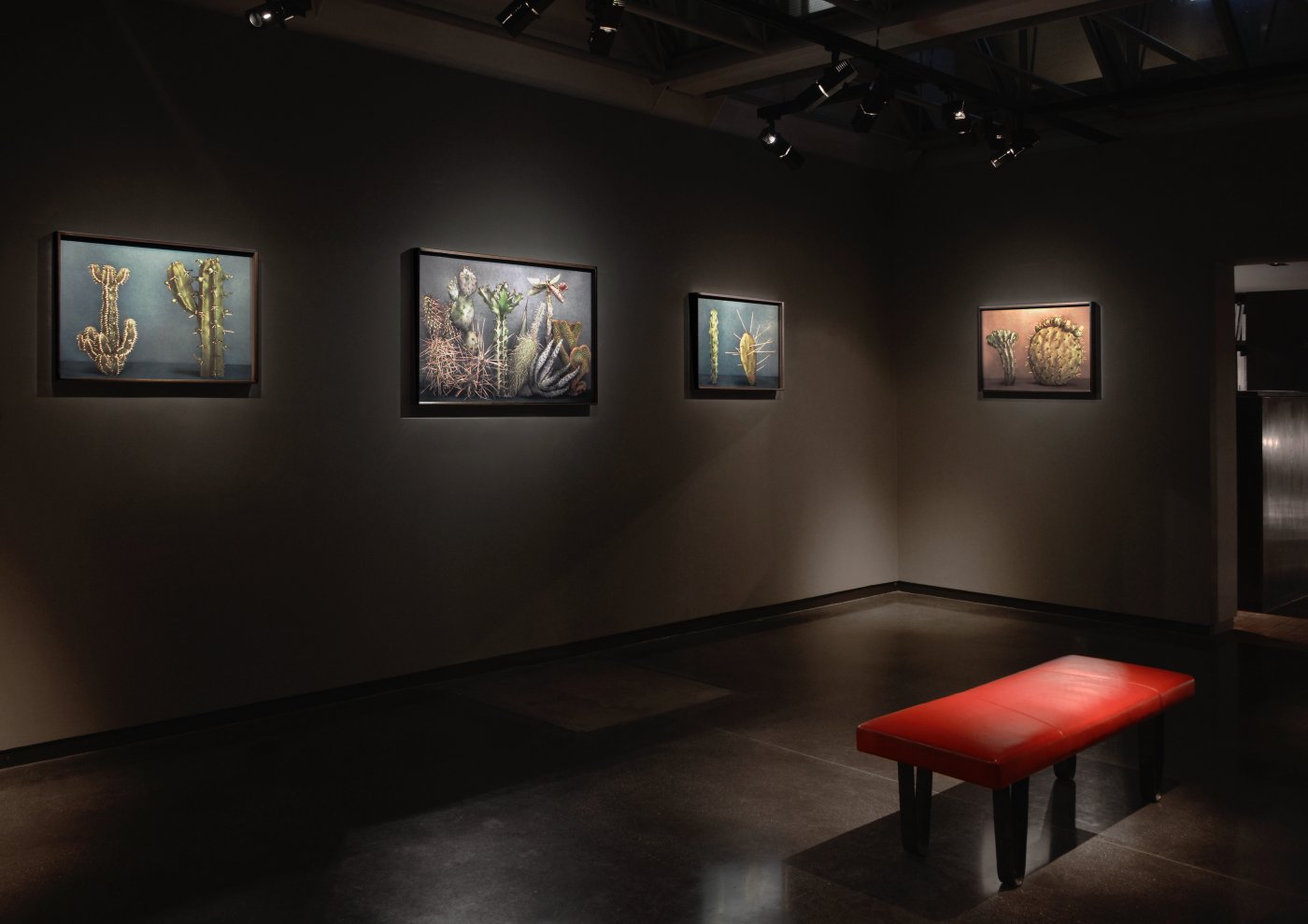 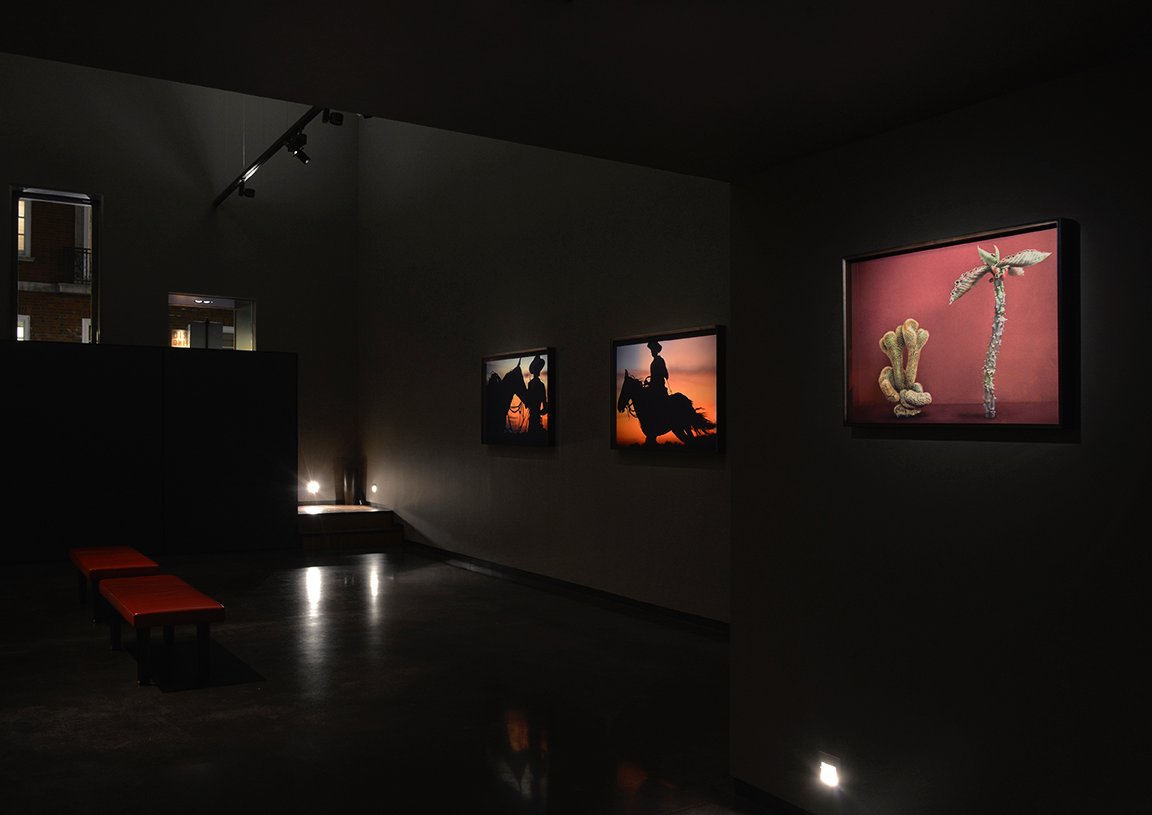 The exhibition highlights images from Testino’s ongoing project ‘A Beautiful World’ which explores cultural traditions and symbols of peoples around the globe. Whilst Mario Testino has historically been recognised as one of the world’s most in-demand commercial and fashion photographers, his life and career’s real magnum opus is at its genesis.

This exhibition takes at its heart themes which, like the overall project, reflect the origins of the artist himself. Peruvian in origin, Testino has returned repeatedly to the Andes to explore the regions hidden cultural histories such as in his 2007-2020 project Alta Moda. Unlike this project which focused on a very specific fashion from the mountains of Peru, ‘South Americana’ captures the spirit of the larger region and universal truths to be found within it.

The exhibition is divided into two separate but coherent parts.

The first gallery is filled with prints of vibrantly coloured vaqueros from Colombia. Long before the American cowboy, these mounted cattle herders, became experts in a style of horsemanship with roots as far back as 500 years. Their style of equitation is renowned for its strength and beauty, emphasised by the synergy between horse and rider. Taken in the Llanos sunrise, these vaqueros are made abstract, in silhouette which evades a sense of portraiture and forces to the surface the harmony of the men, the horses and their environment.

The second gallery features prints of cacti. Displayed before neutral toned backgrounds, the desert plants appear like subjects in a portrait studio. In groups of two or more, each individual cactus appears in dialogue with its opposite. Their setting anthropomorphises the plants: short, stout, and spritely or tall, animated, or delicate. In the manner of Irving Penn’s famous pictures of flowers, the dialogue between each cactus serves to enhance the essence of the individual whilst emphasising a sense of natural community.

The pairing of the cactus and the vaqueros in the gallery reinforces the motivations of Testino’s endeavour. In ‘A Beautiful World’, Testino does not simply represent beauty as he finds it. Testino unearths beauty that is not reliant on the circumstance of his subjects. Like Pygmalion creating his ideal lover – Testino fashions and moulds universal concepts derived from his travels and explorations. He presents us with a ‘beautiful world’ to discover that may be universal and still entirely unique to each and every viewer.

Internationally regarded as one of the world’s most influential fashion and portrait photographers, Mario Testino is responsible for the creation of emblematic images, transmitting emotion and energy in an open and intimate way, to document people all over the world.

Testino’s work has been exhibited in museums around the world, including the Helmut Newton Foundation in Berlin (Undressed, 2017) the Shanghai Art Museum (Private View, 2012) and the National Portrait Gallery in London (Portraits, 2002). Testino’s most recent body of work is an artistic exploration of cultural identity, part of a wider project to highlight diverse beauty. As he travels the world, Testino reveals what makes culture in each country special, challenging us to find a more sustainable balance between change and tradition.

More than 17 books of his photography have been published, including MaRIO DE JANEIRO Testino, Kate Moss by Mario Testino, Alta Moda and Fina Estampa. Alongside his 40-year practice as a photographer, Testino has realised a body of work as a creative director, guest editor, art collector, philanthropist, and museum founder in Lima. MATE – Museo Mario Testino – was established in 2012 to contribute to his homeland of Peru through the cultivation and promotion of South American culture and heritage. In recognition of his charity work, Testino was awarded the Legion of Honour of France in 2017, the Order of the British Empire in 2013, and the Grand Cross Order of Merit in Peru in 2014. In October 2016, Testino opened the first Parques Teresita playpark in association with Natalia Vodianova and the Naked Heart Foundation in Cusco, Perú, and the second in January 2019 in Ayacucho, Peru.

Hamiltons Gallery has exclusively presented the first glimpses of Mario’s ‘A Beautiful World’ at its Mayfair Gallery since 2019.

From what impetus do photographic images emerge and what do they reflect? Are they honest, or are they clever manipulations? Are they art or are they commerce? More generally, what purpose do they fulfil? What essential function do they serve?

In relation to the work of Mario Testino, these questions, until now, have largely resulted in unambiguous claims that his production is purely for the purpose of trade. But that was before; before Testino took a turn away from a profession made up of many suitors all seeking covers of major magazines and global advertising campaigns.

Equally, Testino had to ask himself a deeper question – one which would be life-saving and troublingly honest: what more could he photograph after being the mirror of the flamboyant 1990’s? Where could he go when, in the wake of Helmut Newton and with the help of Carine Roitfeld [the former editor of Vogue Paris], fashion and art had perfected the art of transgression from “porn chic” to its veritable limit? It seems that in his field, Testino had no more to prove. It’s like he’s been at the end of a road and after photographing the Rolling Stones, Madonna or Lady Di it had become difficult to continue with the roughly equivalent celebrities like reality TV stars or influencers of today. A page had to be turned, and time had to be taken to process the past and provide necessary hindsight to see what was ultimately to be retained.

This shift acted as a renewal, a return to his origins. He retained an appetite for ‘image making’ with a kind of ever-present vitality, but this energy is now dedicated to restoring what concerns him the most: his roots and his South American culture. He chose to return to his native country much like the poet Aimé Césaire did in Martinique in the 1930’s, to question his Peruvian identity (he was born in Lima to an Italian father and an Irish mother), an identity for which he yearns as much as he observes. Testino testifies to the richness and sophistication of this culture through images drawn from Andean cultural background with its vaqueros, its colourful clothes like the chullos that are worn so proudly, its mountain peoples and their extraordinary rituals, the tropical flora of the seaside or that which covers the high-altitude plateaus which are dominated by a wide variety of cacti, both pop and meditative encyclopaedic elements that make up for him an aesthetic ethnological catalogue.

It’s essential to have a rear-view mirror in place on Testino’s career through the ’90s to better appreciate the almost naïve freshness of his latest work which layers a great many images as if he recognises that his new ambitions require an endurance and a great burst of energy to be accomplished.

In the process, Testino is building his photographic vision not by adding to the past but by deconstructing and essentialising it. His new work depicts the primal and unadulterated nature of his subjects, making them immediately recognisable. His practice has a purity and a simplicity of which one can speculate that if it were pushed further, it would perhaps go as far as abstraction – a real temptation – as with these cowboys in Chinese shadows which evoke ideograms on Hollywood ‘backdrops’ or as with his still lifes of cacti that summon Karl Blossfeld, Georgia O’Keeffe or the conceptual images of the desert by Richard Misrach giving a palette of organic and anthropomorphic shapes on differently coloured backgrounds.

The work reveals itself, as with an Irving Penn, at the same time documentary, aesthetic, poetic and visually very effective, linking his current work with the precision of the fashion photographer that he once was.

Today, after many decades, Testino draws a strong and generous creative arc. He can answer in his own original way the questions posed by photography. Not that he answers these in an absolute way; rather, he invites us both to reflect on the fluidity of the practice which goes with him from a globalized photography to a stripped down and intimate work, and to consider images not only in their singular autonomy but also as part of a history which invites itself with each reading. Thus, his current work takes on a particular meaning when we articulate around it the idea of ​​contrast, counterpoint, coherence. Considering these concepts enriches the perception Testino challenges us to seek from within his images – to look between the past and present – to what can possibly be communicated. And in this way his personal creations – in some ways not far from a diary of experience – remove him from his role as an image maker to one of a contributor to the legacy of representation, extracting rather than merely presupposing beauty.