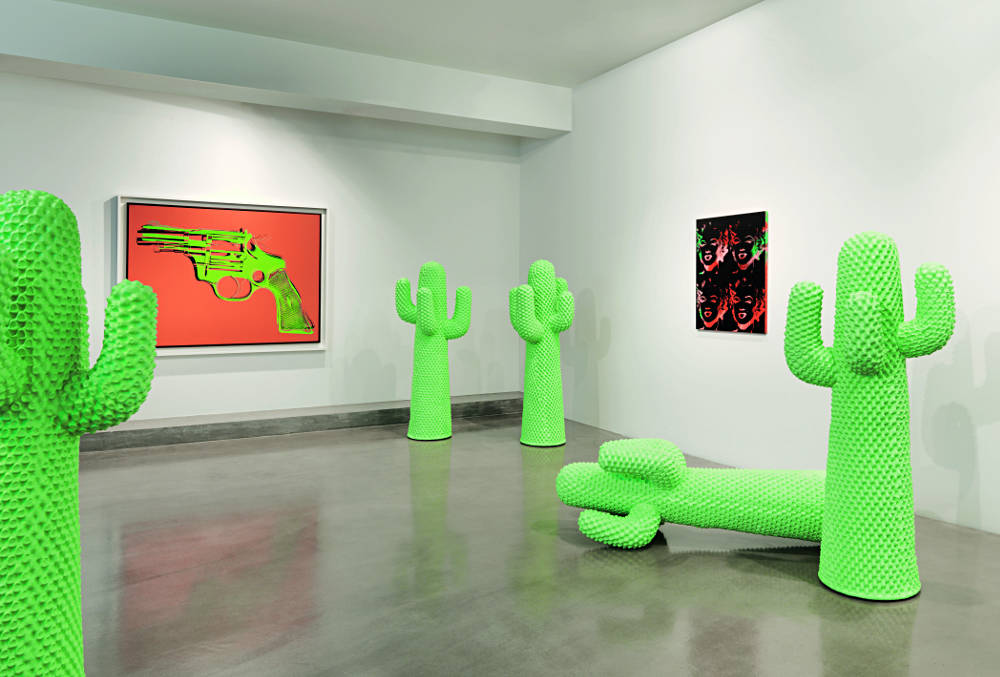 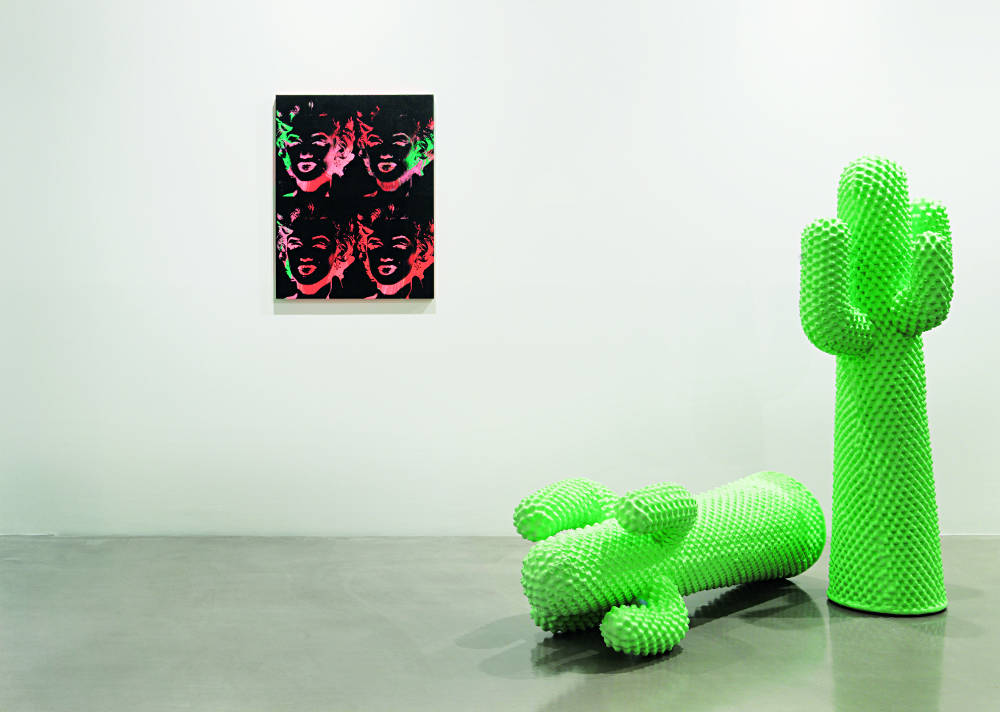 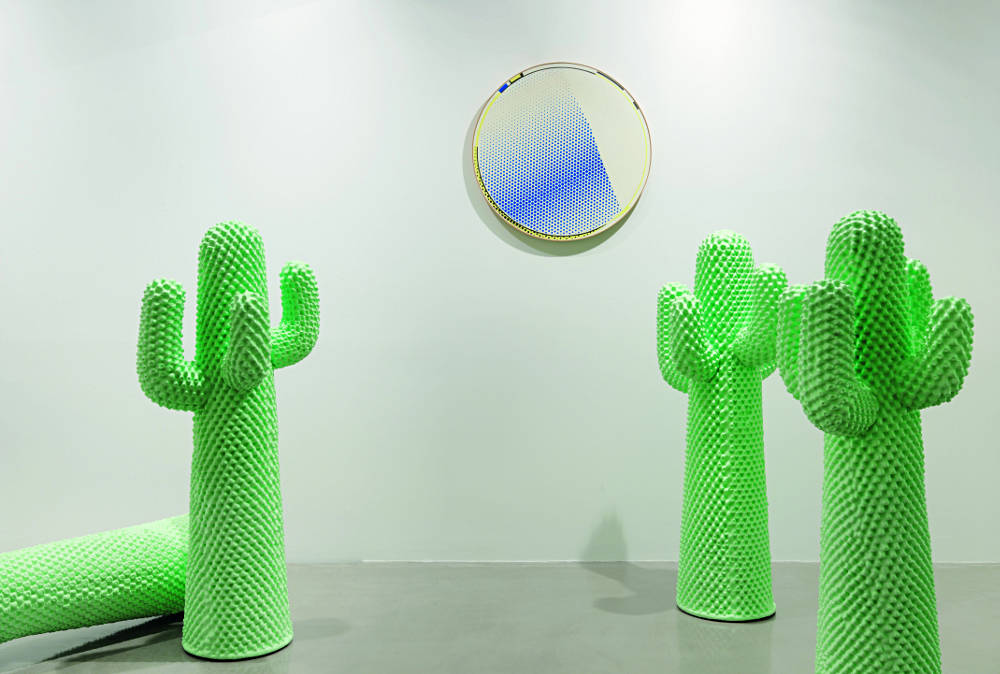 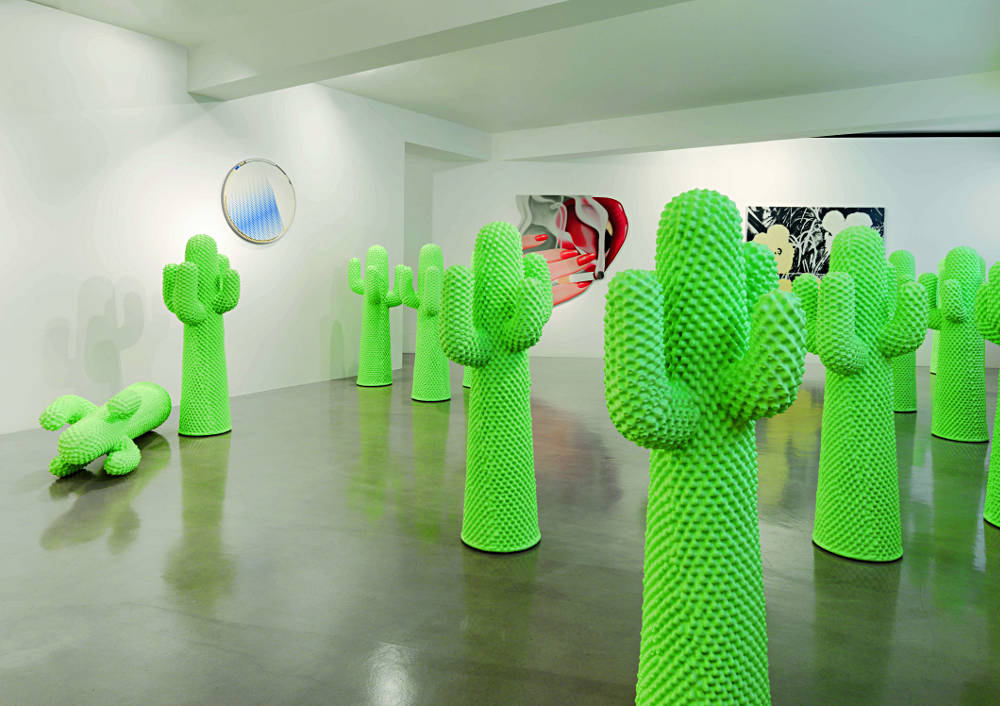 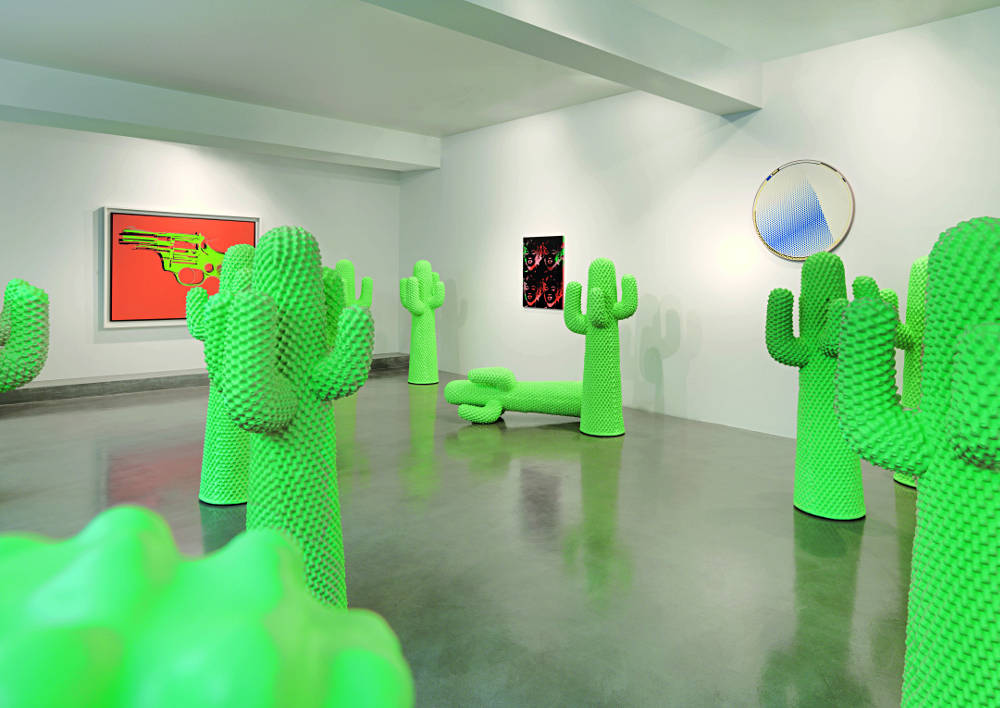 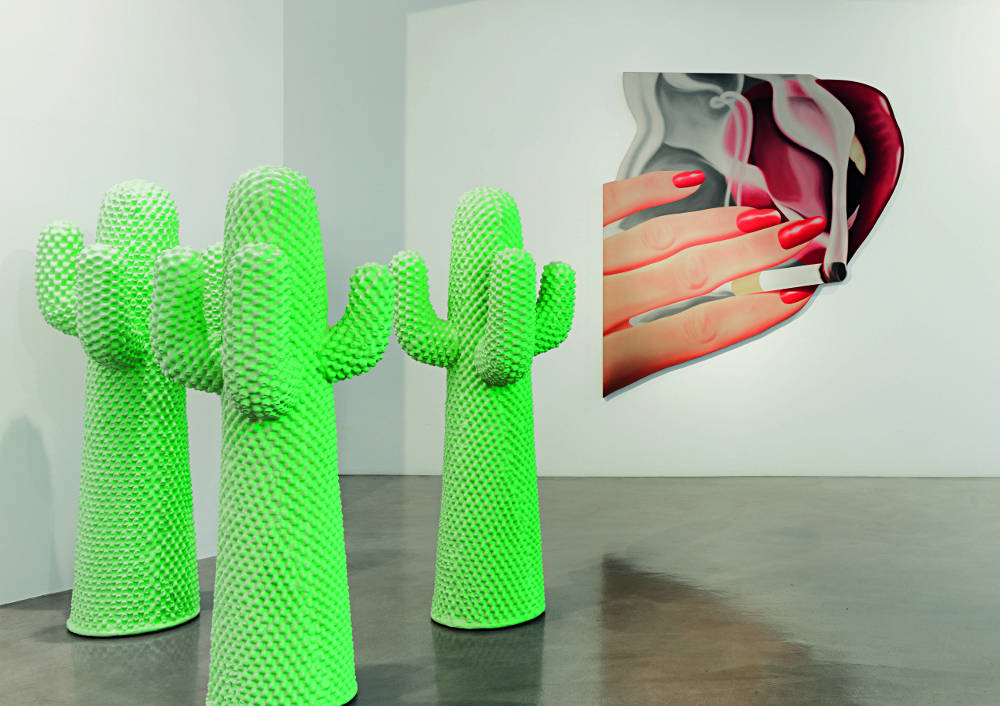 “Pop is a movement that has been explored and celebrated in many ways. For our autumn 2017 show I wanted to approach the concept from a new perspective – that of an immersive exhibition with an exciting design element, to transform the way visitors interact with the gallery space and works on display,” says Pilar Ordovas. “I was excited by the idea of commissioning a special edition of an iconic design and celebrating the two designers of Cactus® alongside the established canon of Pop artists.”

In his series of Marilyn portraits, which began shortly after Marilyn Monroe’s death in August 1962, Andy Warhol (1928-1987) found all the promise, beauty, pleasure, fame and tragedy that emblemised 1960s America. However, in the Marilyn (Reversal Series), executed in 1979-1986, the emphasis shifted from the celebrity of the sitter to that of the artist himself. Taking his cue from the tradition of artists who have adapted the art of their predecessors, Warhol expropriated material from his own, by now famous, repertoire of images, transforming and updating his classic Pop iconography of the 1960s. Through negative printing, Warhol achieves a ghostly dematerialisation of his subject in Four Multicoloured Marilyns (Reversal series), 1979-86, flipping the power of the original image so that it is no longer a depiction of a Hollywood starlet but is rather a wry comment on Warhol’s own artistic achievements.

Warhol’s Flowers are among the artist’s most recognizable motifs – large, Day-Glo blossoms that hover over a variegated pattern of grass. For these works, Warhol appropriated and doctored an image of hibiscus blooms, which he found in an article published in the June 1964 issue of Modern Photography. By the mid 1960s, colour began to play an increasingly important role in Warhol’s work, and he deliberately chose cosmetic hues of brilliant colour to draw the viewer in. The abstract, manufactured look of Flowers, 1964-65, emphasises both their function as a commodity and the mass-produced process by which these symbols of natural beauty have come into being.

Associated with the Pop movement, although resistant to being labelled as such, the American artist Tom Wesselmann (1931-2004) came to the fore in the 1960s with billboard-scaled paintings, executed in flat bold colours, that drew their inspiration from Americana and media culture.

Initiated in 1967, the Smoker series was a breakthrough in Wesselmann’s production, with the introduction of shaped canvases, which came to dominate his later work. In the mid-1970s, he added a hand to the composition, where previously there had only been lips and a cigarette.
In Smoker #22, an oil on shaped canvas executed in 1975, smoke wafts around sultry pink lips and manicured red fingernails, an image that evokes the glamour and style of Silver Screen Hollywood and creates a visual innuendo to rival those of his celebrated Great American Nude series.

Roy Lichtenstein’s (1923-1997) Mirror #2, a circular canvas painted in 1970, is from a group of Mirror paintings made by the artist in 1969-70. Rendered in Lichtenstein’s characteristic Ben-Day dots, this painting is a striking reminder that the simple surface of things does not necessarily reflect a more complex reality. In this series Lichtenstein initiates a playful dialogue with artists throughout the centuries – from Jan van Eyck and Diego Velázquez to Édouard Manet and Pablo Picasso – who all sought to recreate the mirror in paint.

Mass consumption, mechanical reproduction, and violence elegantly intermingle in Warhol’s slick silkscreened canvas, Orange Gun. This vivid painting is being displayed for the first time in the UK since it was executed in 1982. It belongs to a series of works depicting firearms made between 1981-83, the immediate years after the fatal shooting of John Lennon in 1980, and assassination attempt made on President Ronald Reagan in 1981. The seemingly detached and decontextualised motif of the gun was in fact a profoundly personal symbol for Warhol, who himself was shot in his Manhattan studio in 1968 by Valerie Solanas, a trauma that coloured the last two decades of the artist’s life. As with all of Warhol’s most compelling works, Orange Gun leverages the superficies of American cultural icons to puncture real human depths.

Bold, bright and playful, just like the paintings they surround, Cactus® invites the viewer to consider the flow of ideas between modern design and art, both then and today. Cactus® was originally conceived in 1972, by artists Guido Drocco (b. 1942) and Franco Mello (b. 1945) for Gufram. The Italian firm was established in 1966 at a time of radical experimentation and since then works with artists and architects in order to further the possibilities for modern furniture and design. In a special collaboration with Ordovas, this edition of Cactus®, a series of soft 170cm tall handcrafted cacti, has been coated with photoluminescent Guflac®, the one of a kind paint patented by Gufram, which glows in the dark, illuminating the gallery at night.