I dream of a point from which the beginning of every apocalypse can be observed, and that I am a captive at that point. Above my head, I see all the disasters in the world being born: hurricanes growing from light sea breezes, tsunami waves rising from vibrations in the earth’s crust, toxic gases slowly emanating from the Siberian tundra. Suddenly my prison warden says: Your turn is coming up. That’s impossible, I think to myself. After all, I’m still well-dressed, I’m still young, it’s still light and my shoe heels are still full of morphine. Then I notice the dull tremor from the earth. First, I want to scream with terror, but then I am filled with primeval joy as my body begins to decompose.

Galleri Magnus Karlsson presents Maria Nordin’s (b. 1980) third solo exhibition at the gallery. A catalogue is published for the exhibition where Swedish author Lina Wolff has written short prose texts for several of the works. 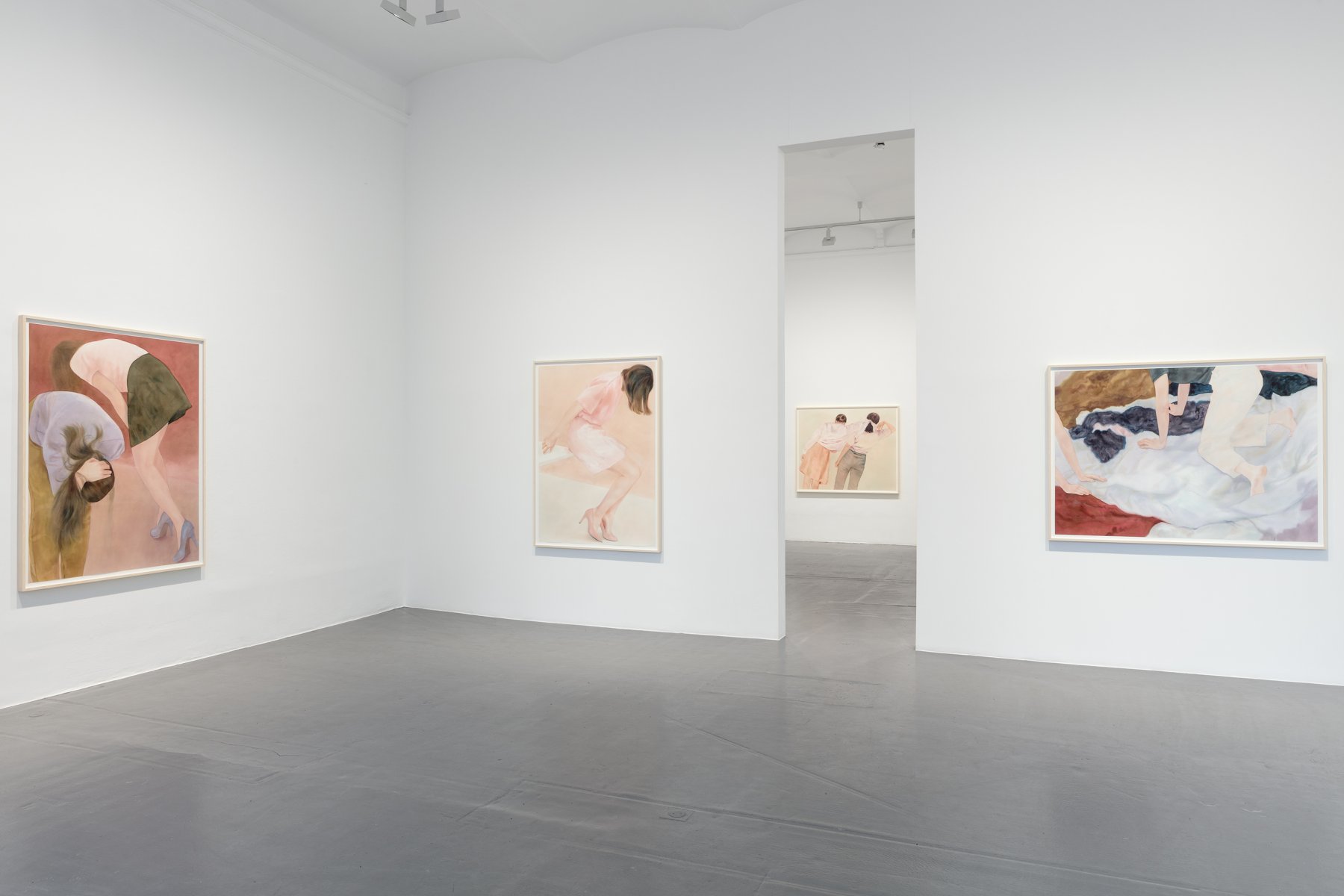 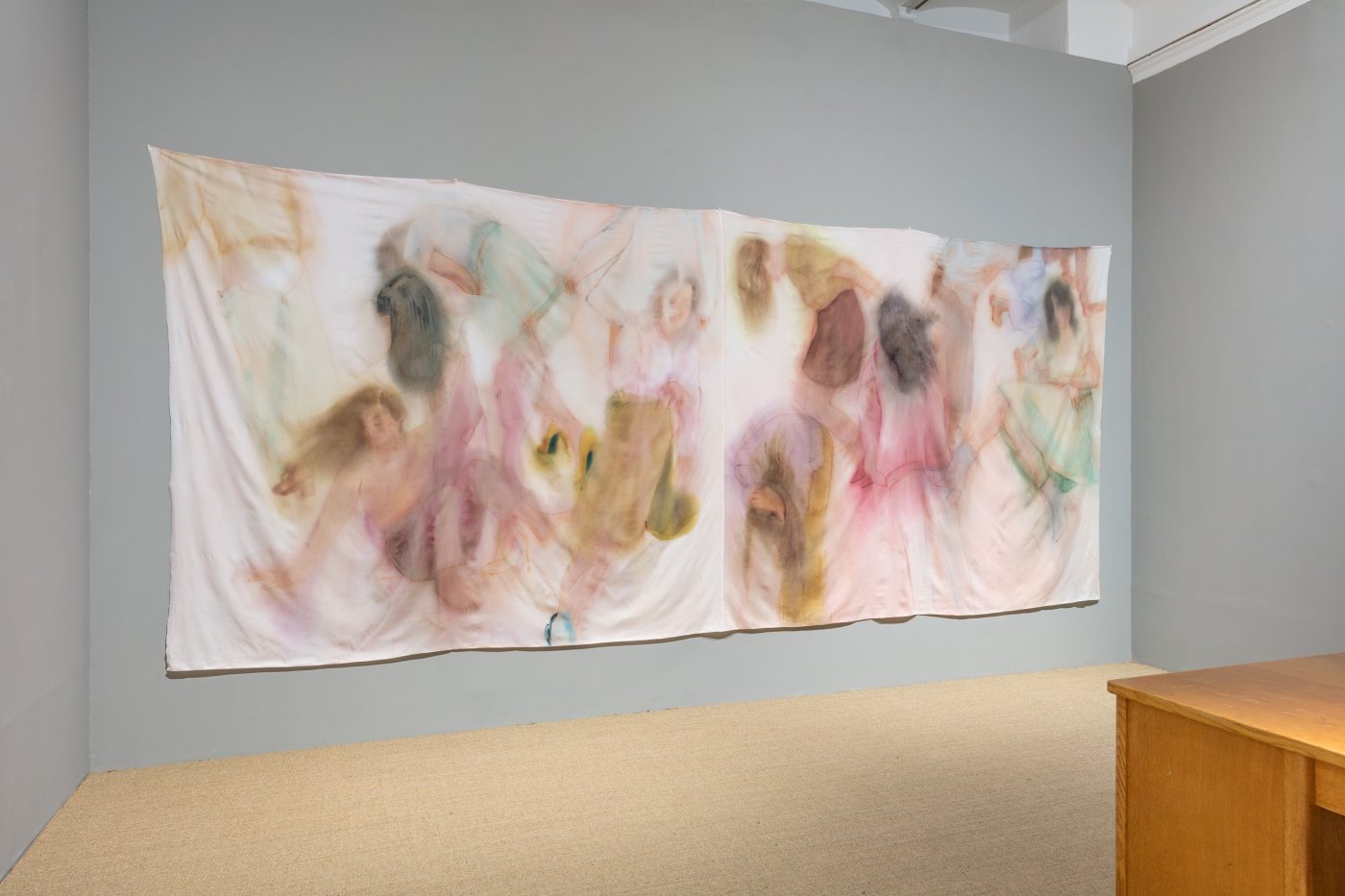 The exhibition title Law of Falling Bodies alludes to both the law of gravity and the figures in the paintings. They are in the middle of a movement, isolated in a balancing act, or already fallen. Painted with watercolor on large papers, mainly in light pink, yellow and blue, they do not necessarily interact with the implied darkness.

In her art, Maria Nordin focuses on how experiences are expressed through the human body or how bodily experiences can be shaped. The new works deal mainly with the movement of bodies. She has taken inspiration from theory of modern dance, where fall and gravity have been deliberately used, unlike the classical ballet which has strived to overcome gravity.

The fall, which both symbolically and literally, causes us to lose our footing is also associated with decay. Physical expressions such as being out of balance and losing stability serve as metaphors for our psychological or emotional state. The exposed vulnerability becomes an expression of decadence and failure, something that is consolidated in a culture where lightness, mobility and stability are desired. With titles such as Tipping Point and Decline, the figures can be regarded as unstable bodies but also as symbols of the social and political. The decay which in its worst form turns into dystopia.

But where the weight and the fall are negative forces that preferably should be counteracted, it is at the same time inevitable to fall. We are built for movement, and gravity and the gravitational pull of the earth are also the prerequisite for existence. To fall can be to give up part of our persistent need of control, to fall can be an act of resistance.

Maria Nordin (b. 1980) lives and works in Stockholm, Sweden. She was educated at the Royal Institute of Art in Stockholm, Sweden (2005– 2010). She has exhibited regularly at galleries and museums in Sweden and has received high recognition for her work with large scale watercolours and animations. In 2011 she was awarded the Beckers Artist Prize and solo exhibition at Färgfabriken in Stockholm, Sweden and in 2017 she received Carl-Axel Valén’s Sholarship. Her major solo exhibition at The Nordic Watercolour Museum in Skärhamn, Sweden (2018) toured to Halmstad konsthall and Eskilstuna konstmuseum, Sweden (2019). The exhibition Law of Falling Boides is her third at Galleri Magnus Karlsson, Stockholm, Sweden. She is represented in the collections of, among others, Moderna Museet, Stockholm, The Nordic Watercolour Museum, Västerås Konstmuseum and Gothenburg Museum of Art in Sweden.

Lina Wolff (b. 1973) lives in Lund after previously working in Italy and Spain as an interpreter and translator. Her first work, a short story collection titled Many People Die Like You, was published in 2009. Her novel Bret Easton Ellis and the Other Dogs (2012) was awarded the Vi Magazine literature award and won acclaim in English translation. Her third book, The Polyglot Lovers (2016), was praised unanimously by the critics and received the Svenska Dagbladet award for literature and the August Prize for best fiction. Carnality (2019) was also lauded in the media and nominated for the Swedish Radio novel prize and the Eyvind Johnson award in 2019.