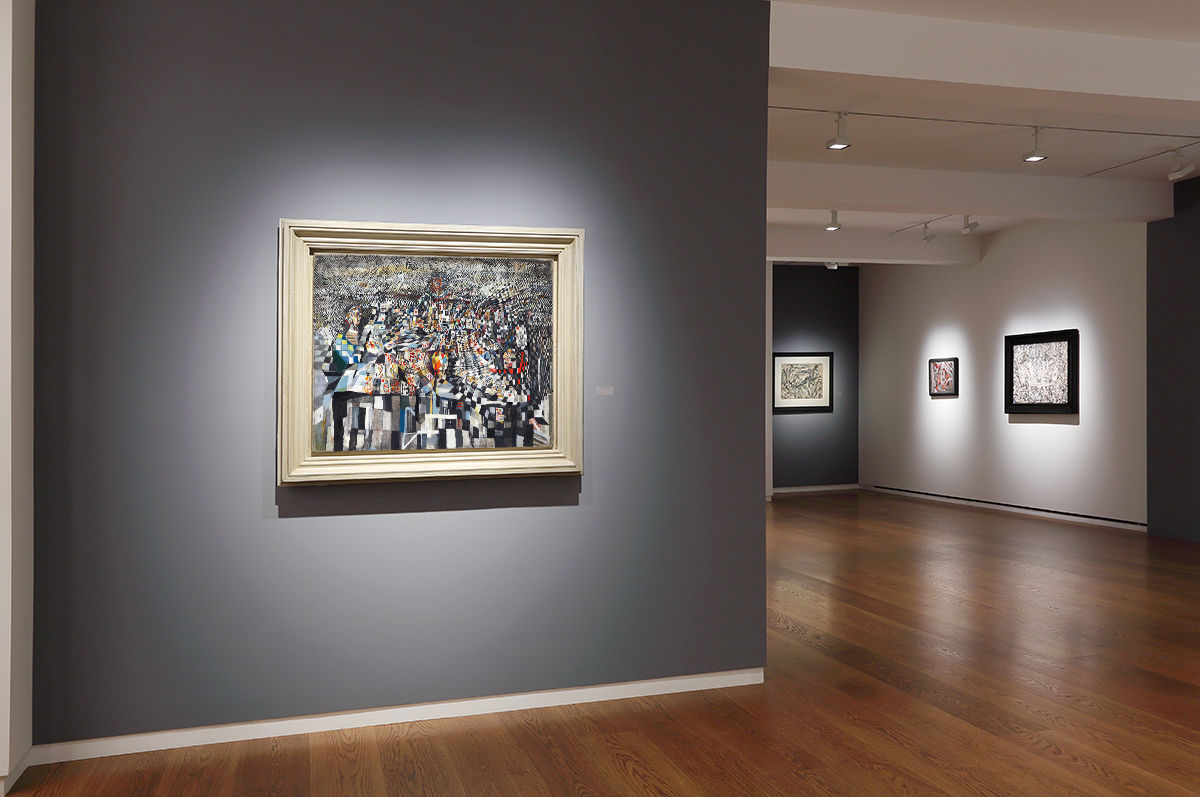 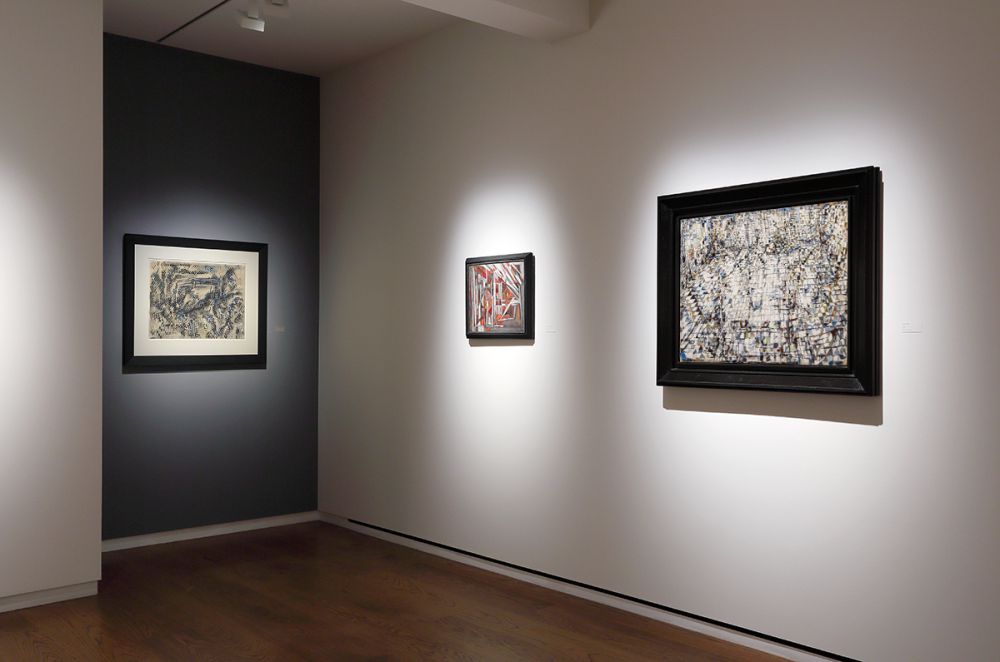 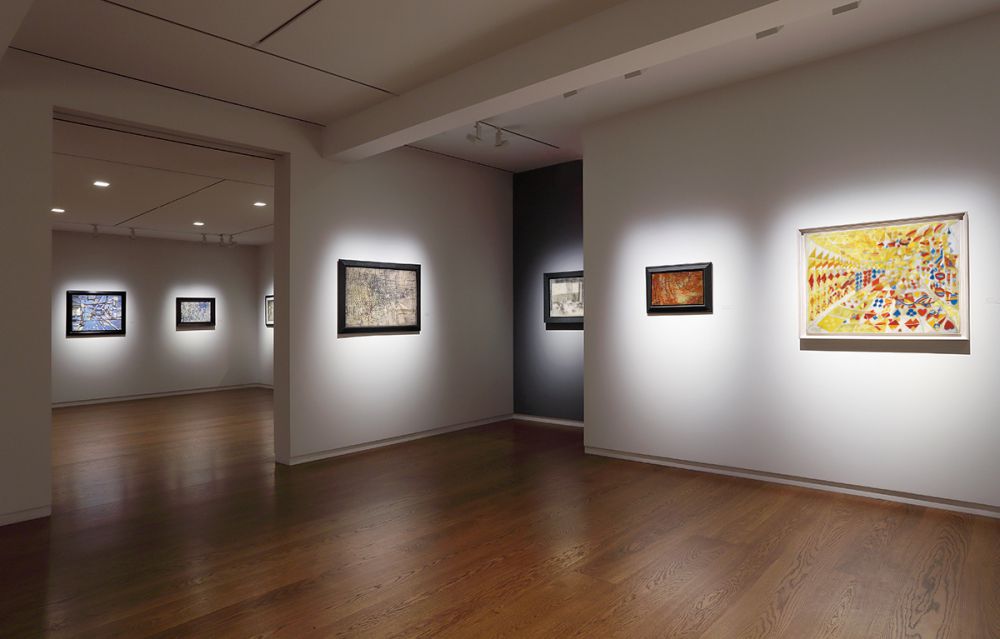 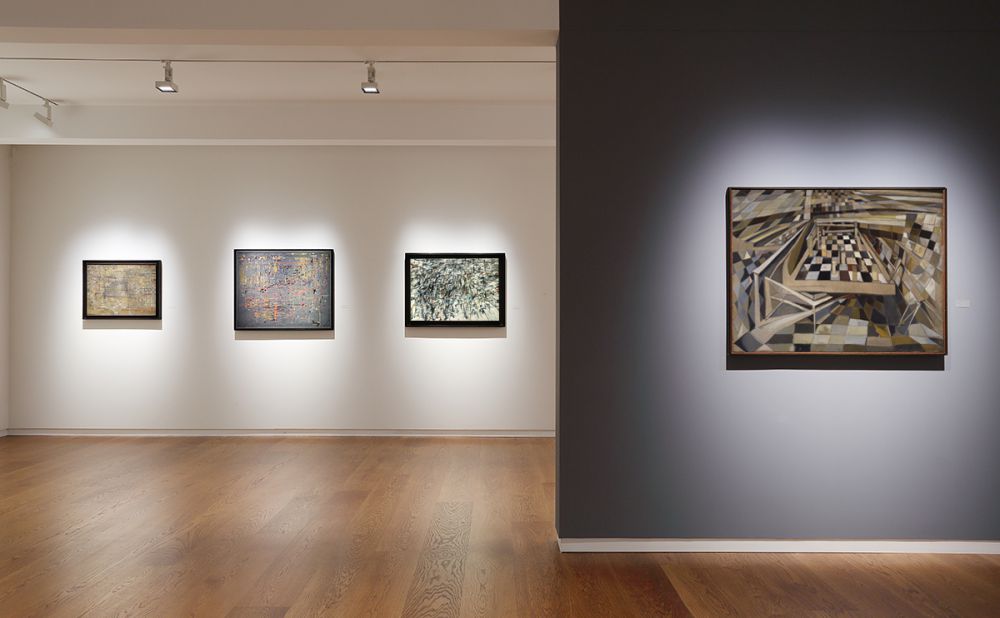 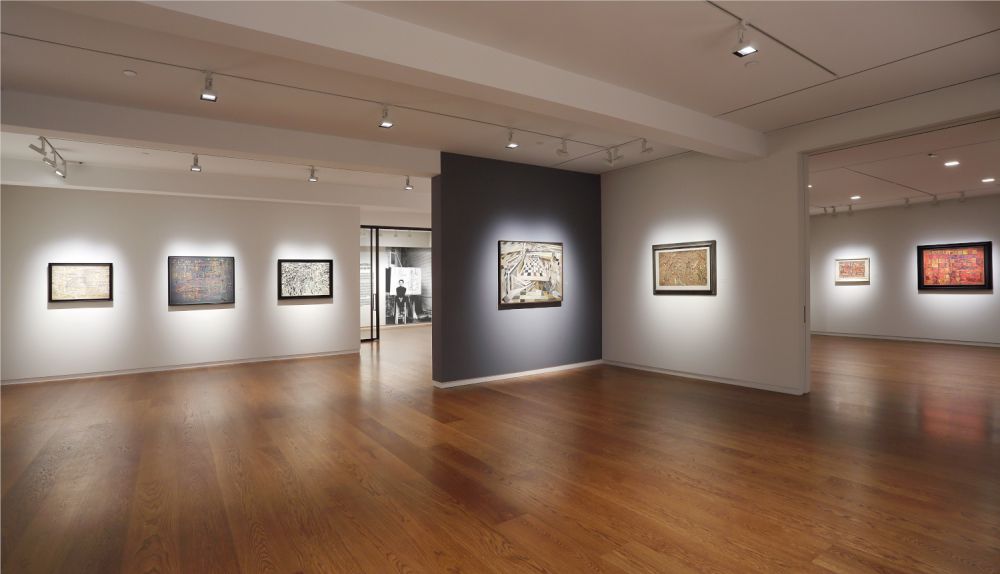 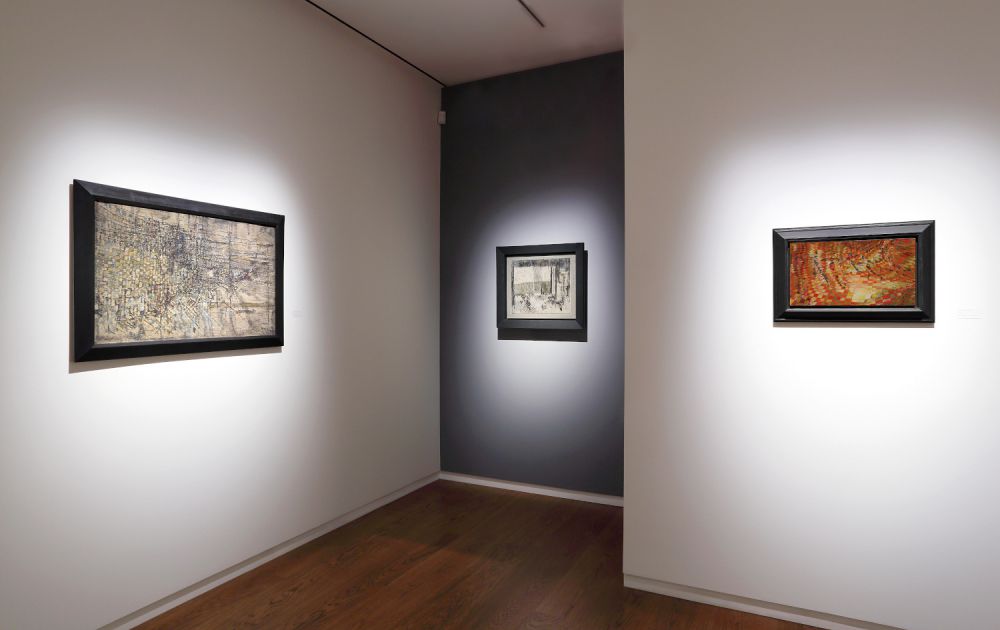 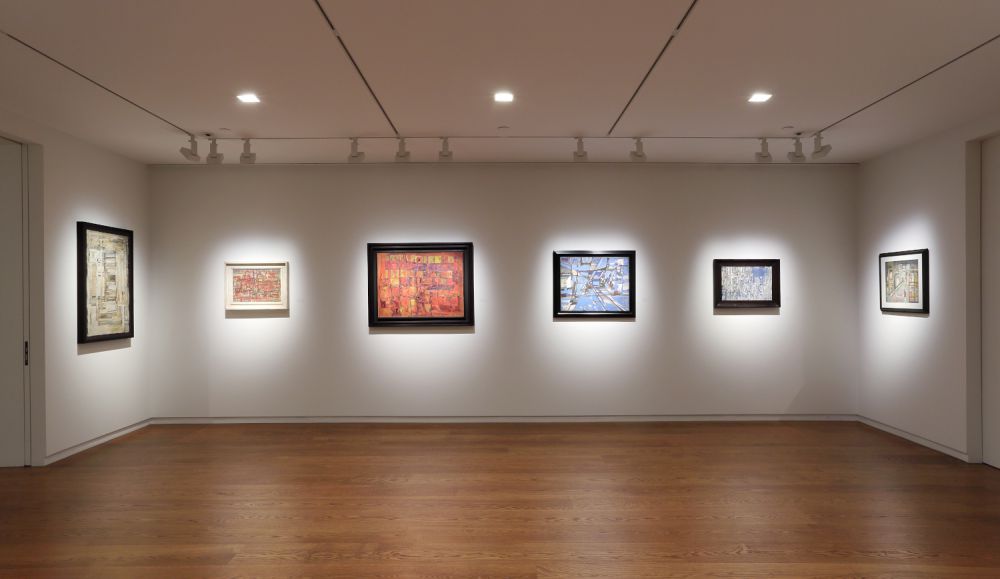 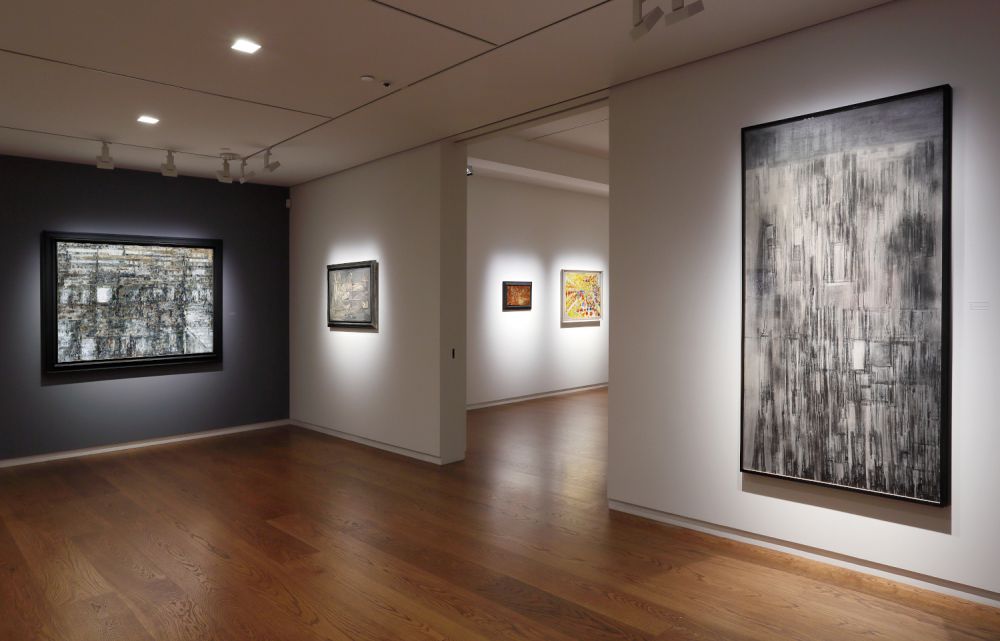 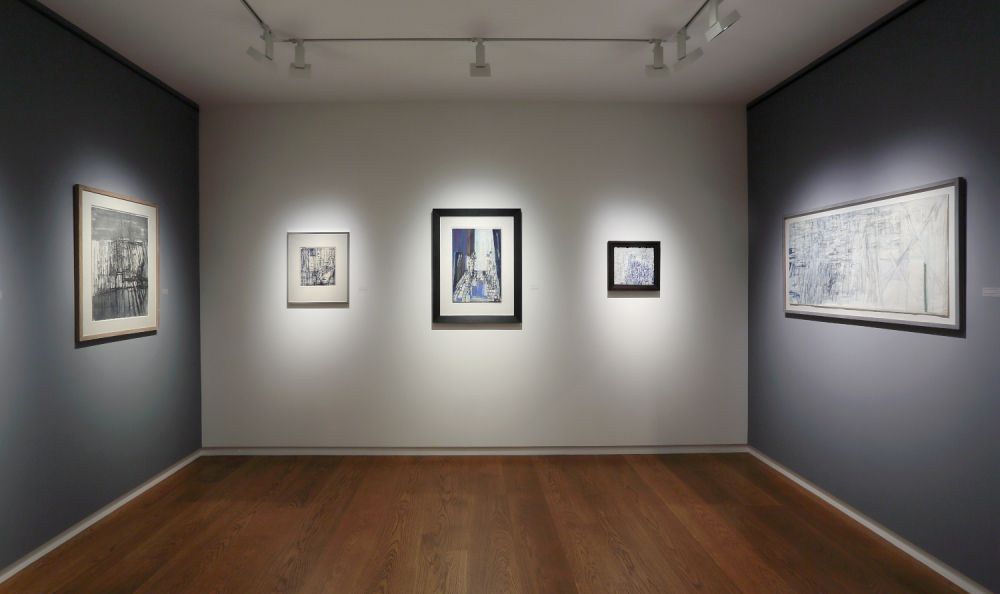 Maria Helena Vieira da Silva celebrates the dynamic range of the Portuguese-born modernist painter’s body of work. A key member of the post-war avant-garde in Paris, Vieira da Silva is known for intricate paintings that reflect her remarkable sense of rhythm and pattern. Historically, scholars have approached her work through the lens of artiste informelle, tachiste, or International Abstract Expressionism. This exhibition looks beyond these categorizations to address Vieira da Silva’s personal use of gestural and formal abstraction to construct pictorial spaces that are at once familiar and unknown. Organized in a first-ever international collaboration with Jeanne Bucher Jaeger, Paris, and Waddington Custot, London, Maria Helena Vieira da Silva unites a vibrant selection of works from private collections and foundations in Europe and the United States in the first exhibition dedicated to the artist in New York since 1971.

In a first-of-its-kind collaboration between the three international galleries, the exhibition spans the entire career of Maria Helena Vieira da Silva (b. 1908, Lisbon; d. 1992, Paris), a key member of Paris’s post-war art community, known for paintings that reflect her keen sense of rhythm and pattern. Vieira da Silva’s works are held in important collections throughout the world, including The Museum of Modern Art, New York; Tate, London; Stedelijk Museum, Amsterdam; and Centre Georges Pompidou, Paris.

The exhibition brings together key paintings and works on paper from throughout Vieira da Silva’s career to explore her unique approach to depicting space through poetic, semi-abstract compositions. The labyrinthine quality of her paintings’ structures plays with space and perspective, inviting the viewer to roam within the multidirectional spaces and penetrate a system that reveals a complex and revolutionary type of representation.

As one of many émigré artists living in Paris in the years leading up to and following World War II, Vieira da Silva studied and assimilated the early modern styles of Cubism, Geometric Abstraction, and Futurism, while becoming an integral part of the group of artists in the city at that time. Her iconic Le Jeu de cartes, 1937, was painted two years before the artist would return to her native Lisbon after her exile from Paris at the outbreak of World War II. Vibrantly colored hearts, spades, kings, and queens reach out toward the viewer in a shuffling motion, traversing the canvas and its inherent two-dimensionality. The recurrence of games in Vieira da Silva’s work functions as a metaphor for the playful exchange between viewer and canvas, spectator and artist.

Les Joueurs de cartes, 1947-48, continues the artist’s investigation of the grid through a systematic structure of small square and rhomboidal shapes. Upon her return to Paris in 1947 after her wartime exile to Rio de Janeiro, Vieira da Silva further explored the theme of card games in her paintings but focused explicitly on the interaction between players. Aligned in a diamond shape and composed of playing cards, the four figures in the center of Les Joueurs de cartes become one with the game itself. This work exemplifies Vieira da Silva’s commitment to her post-Cubist structures and proves her ability to make the Cubist grid malleable and capable of inspiring movement.

Having traveled extensively with her father as a child, Vieira da Silva became familiar with the avant-garde circles of the theater and dance world, and in particular, the Ballets Russes. Returning to the narrative of audience-artist interaction, Vieira da Silva painted several compositions of ballets in the 1940s. In Figure de ballet, 1948, for instance, she abandoned the architectural container of her earlier interiors, melding the performers and performance space into a singular symphony of color and shape.

In the late 1940s, Vieira da Silva further distanced herself from geometric rigidity and integrated a type of shadowing into her shapes. The squares and rectangles in Composition aux damiers bleus, produced in 1949, fade into the cream-colored background, negotiating their presence on the pictorial surface with their backwards recession. In this work, Vieira da Silva entirely reformed the cubist grid of her earlier paintings by abandoning empirical reality, describing neither a place nor time in any discernible manner.

In Sans Titre, 1955, Vieira da Silva focused on the gesture of the brushstroke while maintaining her signature matrix. The geometry of squares and floating lines is challenged by the freedom and abstraction of her peach, maroon, and navy brushstrokes. The floating lines in Sans Titre resemble a network of paths—a recurring motif in the artist’s oeuvre. In this instance, the paths in Sans Titre disorient and prohibit the viewer from fixating on any individual point in her labyrinth. Sans Titre is among several compositions Vieira da Silva painted during the 1950s that recall urban landscapes and the harrowing reality of post-war Europe.

The infinite perspective of her compositions could be understood as revealing Vieira da Silva’s fundamental exploration of space’s recesses and connections, be they intimate or distant. Setting down a loose convergence of lines, without any preconceived subject in mind, Vieira da Silva worked to coax the eye to identify emergent images, based on her memories and an intuitive sense of rhythm and pattern. This fractured representation of reality creates a psychological space that captures how the mind recalls and restructures memory, referring to not only her life in Paris, but to the sensory experiences of her youth in Lisbon, famous for its streets of captivating tiles. In Le Jardin d’ipomée, c. 1974, Vieira da Silva depicted a garden of cobalt morning glories, a flower native to Portugal. Using the texture of the handwoven paper to guide her brushstrokes, Vieira da Silva blended pops of lilac and emerald into the concentration of blue buds.

While there is an underlying structure and order beneath Vieira da Silva’s compositions, her oeuvre blurs the lines between representation and abstraction. Spaces reminiscent of familiar rooms or aerial city views never fully describe a single location or view, but a convolution of visited places. Historically, scholarship has emphasized the role of American artists in the development of post-World War II abstraction with the emergence of movements such as Abstract Expressionism and Color Field painting. Artists active in Europe following the war, however, played an equally central role in the progression of abstraction, practicing gestural forms of expression across movements including art informel and tachisme. Working in a pivotal moment within the modernist canon, Vieira da Silva forged a unique path forward for the legacy of abstraction in Europe and globally—one in which abstract forms and structures unite with lived experience in the creation of a new form of subjective vision.