Victoria Miro in association with The Great Women Artists presents a summer exhibition featuring three young artists who rethink traditional genres to touch upon themes of migration, the workplace, and the gendered language of painting. Founded by Katy Hessel in 2015 @thegreatwomenartists is an influential Instagram account that celebrates female artists, ranging from recent graduates to Old Masters, on a daily basis. 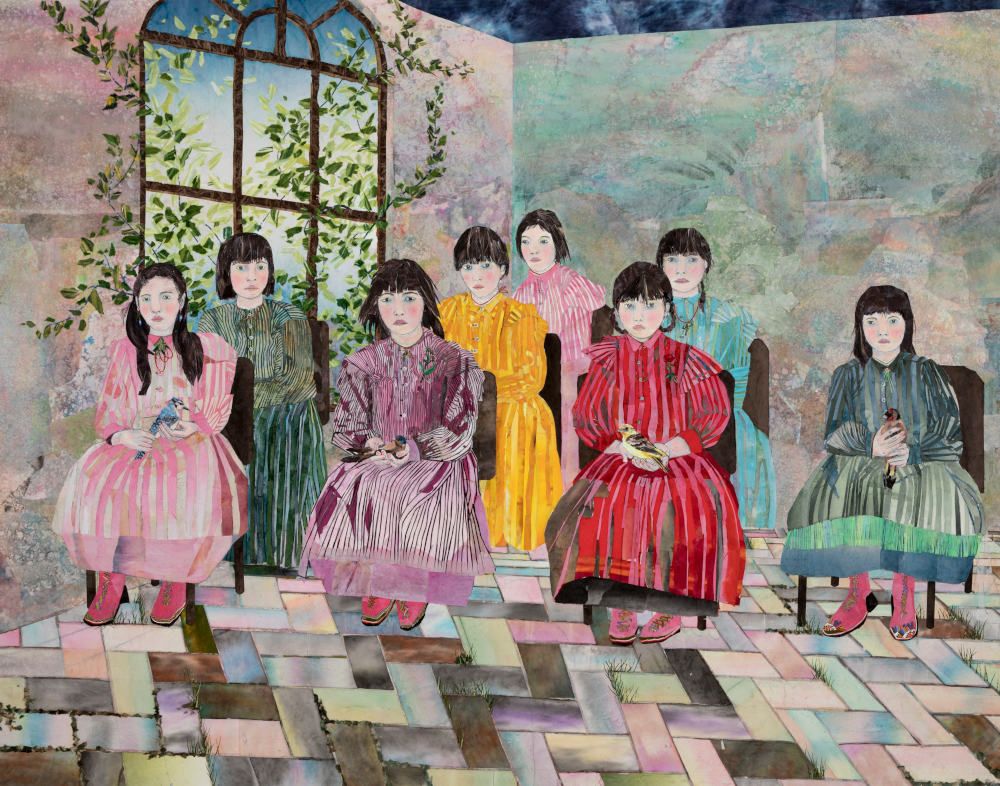 Based in Brooklyn, María Berrío grew up in Colombia. Her large-scale works, which are meticulously crafted from layers of Japanese paper, reflect on cross-cultural connections and global migration seen through the prism of her own history. Populated predominantly by women, Berrio’s art often appears to propose spaces of refuge or safety, kaleidoscopic utopias inspired in part by South American folklore, where humans and nature coexist in harmony. To these apparently idealised scenes, however, Berrio brings to light the hard realities of the current political climate in America. For example, Oda a la Esperanza (Ode to Hope), 2019, in which girls appear captive within an institution-like environment, refers to the Trump administration’s family separation policy.

In her quietly luminous paintings, Scottish-born, London-based painter Caroline Walker focuses on intimate portrayals of women at work in domestic and public spaces, including hotel maids, office workers and shop assistants. Often caught in unguarded moments, and surrounded by the luxurious goods and services that they are required to sell, mend or clean, Walker’s subjects possess an acute psychological intensity. As viewers, we come across them almost as intruders into their world – encountering private thoughts in public spaces, narratives hinted at but never fully told. Rendering visible the often faceless, and voiceless, women behind our image consciousness and conspicuous consumerism, Walker complicates the traditional idea of woman as subject, while illuminating the overlooked subject of the workplace in contemporary painting.

In her large-scale paintings London-based artist Flora Yukhnovich adopts the language of Rococo. Reimagining the dynamism of historic works by eighteenth-century artists such as François Boucher, Nicolas Lancret and Giovanni Battista Tiepolo, Yukhnovich brings classically-inspired painterly traditions into a more consciously feminine and contemporary realm by featuring wisps of millennial pinks and purples. Variation is a driving force in Yukhnovich’s work with her mark making ranging from delicate flourishes to dramatic and gestural brushstrokes, heightening the rhythmic sensuality that plays throughout her ambitious compositions. Existing in a constantly fluctuating state between abstraction and figuration, Yukhnovich’s paintings explore ideas surrounding dualities and multiplicities, transcending gendered painterly traditions while fusing high art with popular culture, and intellect with intuition.

Flora Yukhnovich (born 1990) completed her MA at the City & Guilds of London Art School in 2017. Yukhnovich had her first solo exhibition at Parafin, London, in March 2019, and has recently exhibited at GASK, the Gallery of the Central Bohemian Region, Czech Republic, and the Jerwood Gallery Hastings. Collections include Government Art Collection and David Roberts Art Collection. In 2018 she completed The Great Women Artists Residency at Palazzo Monti, Brescia.