David Zwirner presents Child of Midnight, an exhibition of new works by Marcel Dzama, on view at the gallery’s London location. This is Dzama’s third exhibition at the London space following his 2013 exhibition Puppets, Pawns, and Prophets and his joint presentation with Raymond Pettibon, Let us compare mythologies, in 2016. 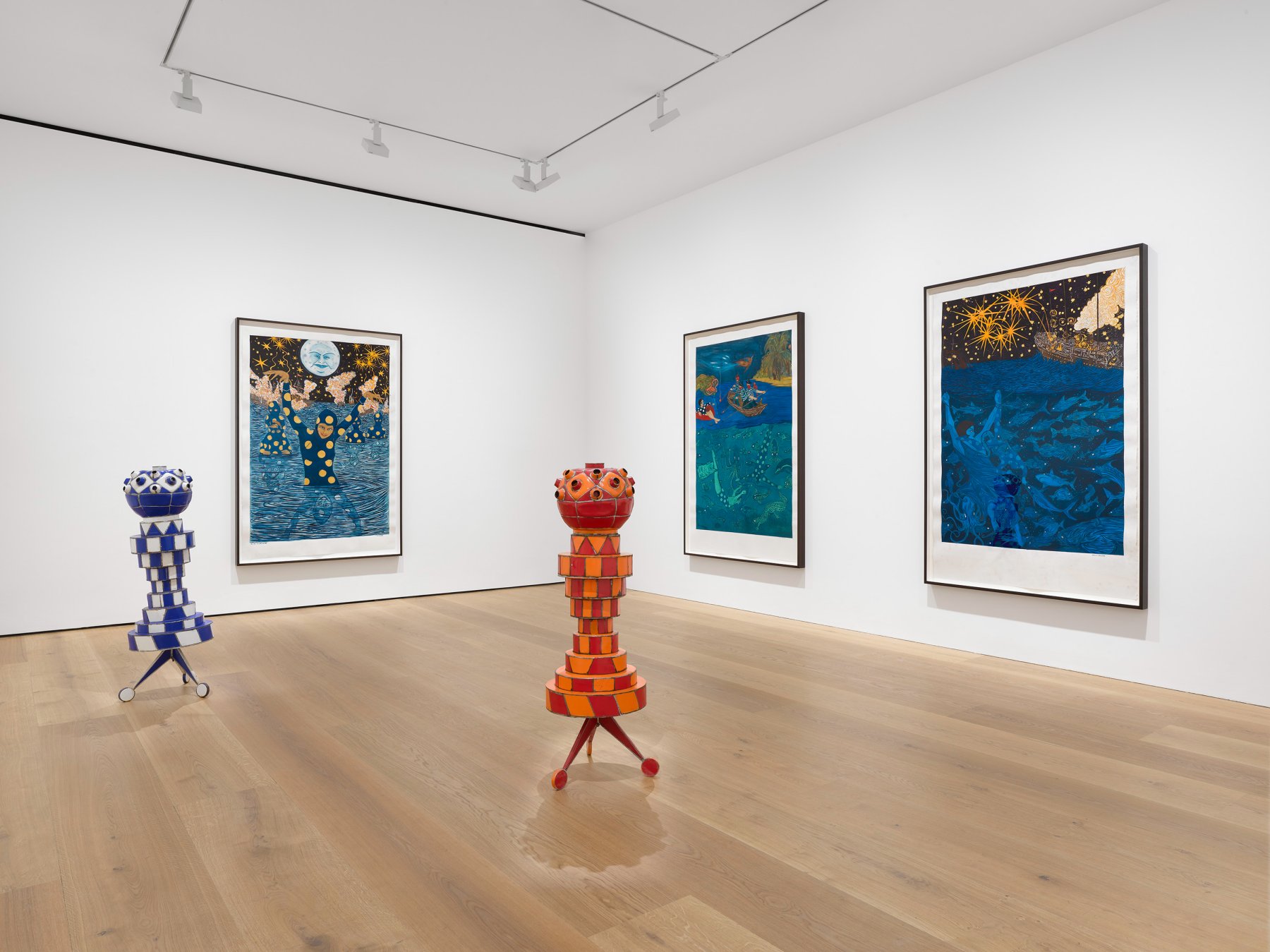 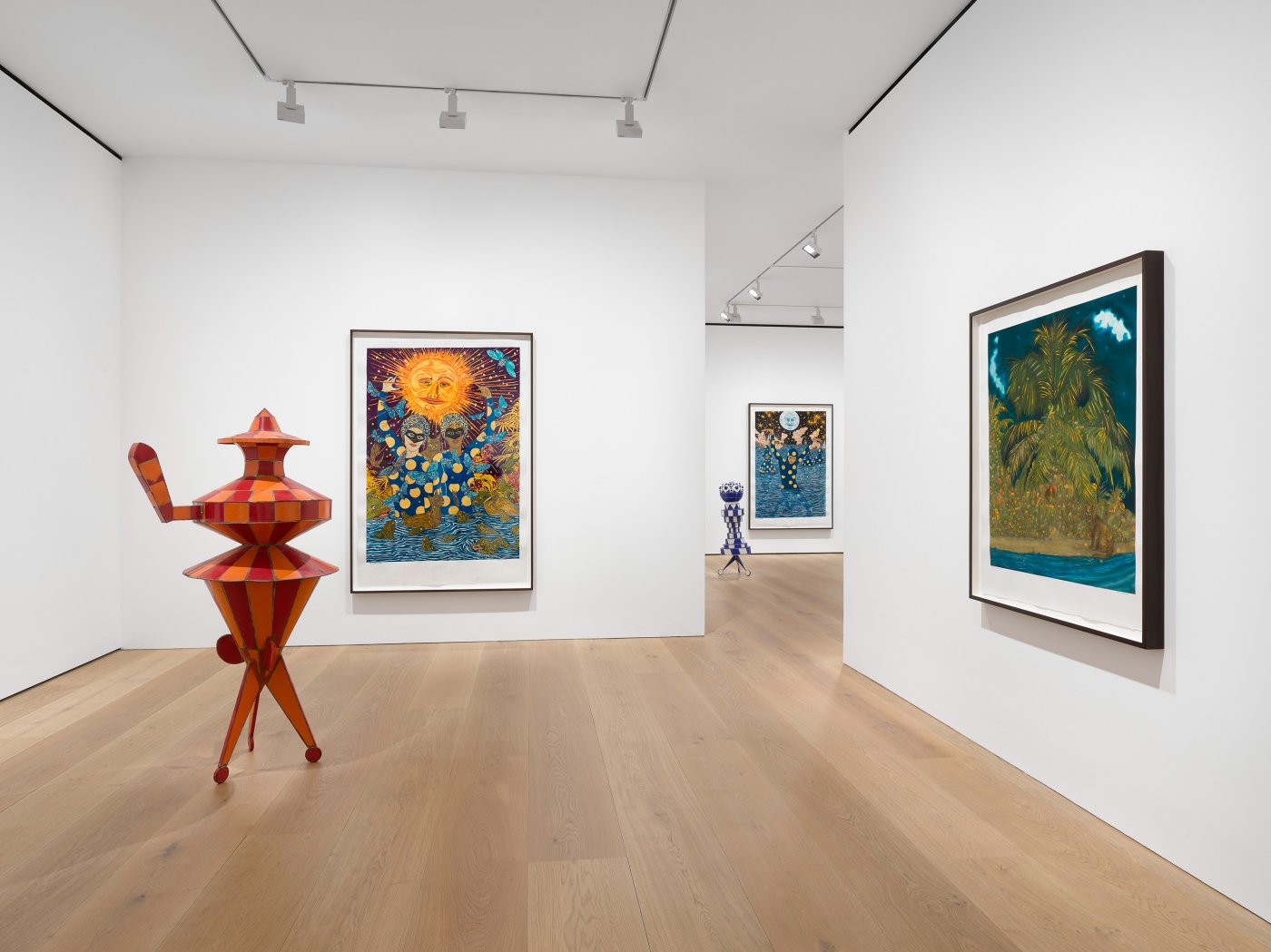 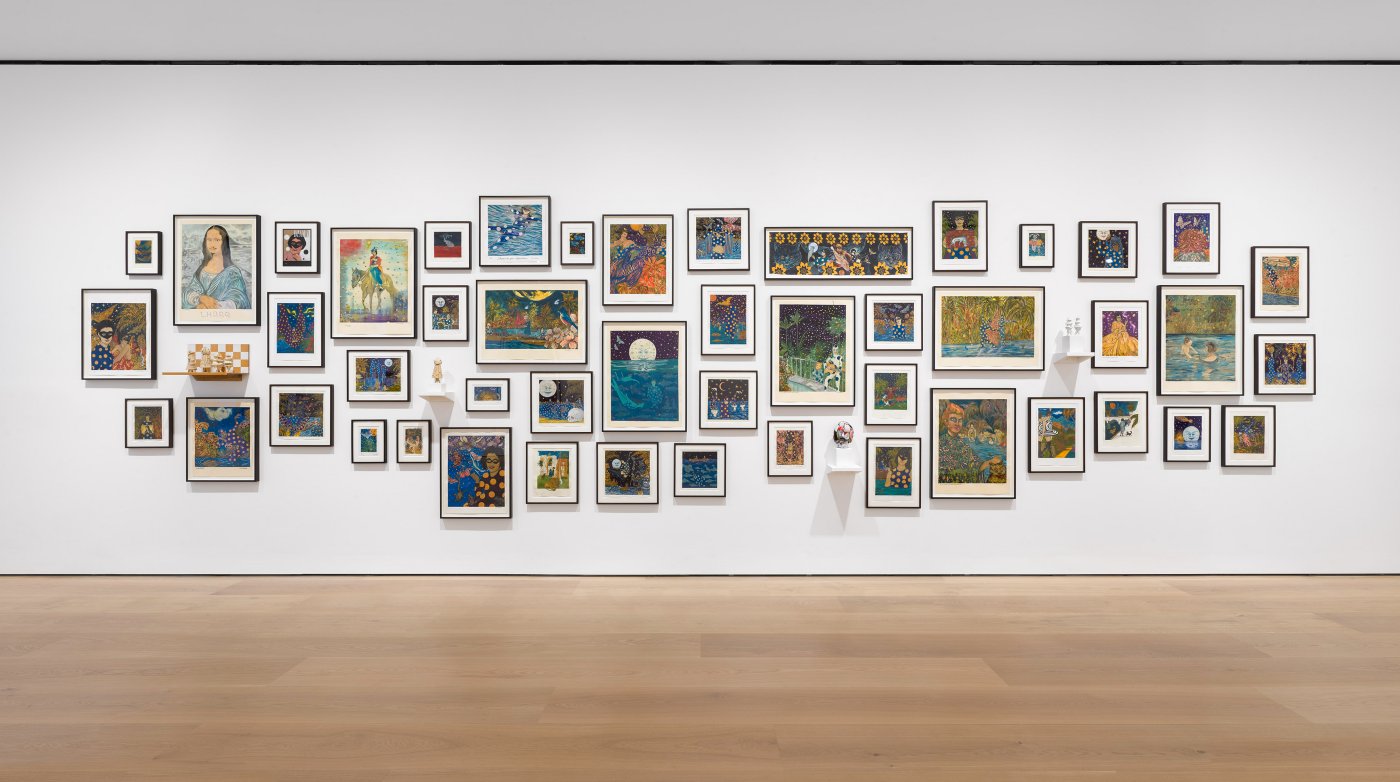 Dzama’s latest works expand on the tropical, oceanic, and celestial imagery and themes that he has been exploring over the last several years in his art. Inspired by a range of sources, including John Milton’s epic poem Paradise Lost, the 1940s kitsch-inspired portraits of Francis Picabia, and the sixteenth-century Augsburg Wunderzeichenbuch (book of miracles), these new works feature costumed figures and anthropomorphized animals dancing and lounging around in lush, vibrantly colored natural settings with large, grinning moons and shimmering stars and comets looming above.

Many of the works show figures partially submerged within endless expanses of waist-high water, or, in the case of a large-format triptych, fully submerged beneath the sea. Rendered entirely in rich blue tones, the figures in this work are depicted floating amongst a dense array of marine animal life including squids, octopuses, and seahorses. These waterscapes appear like scenes from a surreal aquatic ballet. At the same time, like an ominous but beautiful visual allegory, their never-ending waterlines seem to portend the continued degradation and collapse of the natural world. As Dzama notes, “The exhibition, Child of Midnight, plays with the theme of an apocalypse of climate change. That we are counting down the time on The Doomsday Clock, at this hour of midnight, with very little time for our children to prevent certain doom. There is also a little travel escapism in there, although the flood has started. There are also references to alchemy … and the writings of [William] Blake and Dante. And the game of chess we are playing with Mother Nature.”

More than just a metaphor for the artist, chess is a longtime interest for Dzama, which has figured into works throughout his career. The game also has art-historical significance, most notably in Marcel Duchamp—an avid and skilled chess player and a key influence for Dzama—reportedly quitting art making to devote himself solely to chess in the 1920s. Linking these artistic and thematic interests, Child of Midnight will include several rarely exhibited “life-size chess piece” sculptures that relate to The tension around which history is built, Dzama’s 2016 installation in the promenade of the David H. Koch Theater at the Lincoln Center for the Performing Arts, New York. The installation was presented in tandem with The Most Incredible Thing, a one-act ballet by Justin Peck based on a fairytale of the same title by Hans Christian Andersen, performed by the New York City Ballet, for which Dzama created the costumes and set design. These large sculptures recall the forms and motifs of several early twentieth-century artists including the mechanomorphic forms of Fernand Léger’s early abstractions, specifically those in his Exit the Ballets Russes (1914; The Museum of Modern Art, New York), and the conical “sieves” in the lower register of Duchamp’s famed The Bride Stripped Bare by Her Bachelors, Even (1915-1923; Philadelphia Museum of Art). Smaller versions of these sculptures appear as chess sets in several of Dzama’s films, including Dance Floor Dracula (2018) which will also be featured in the exhibition.

Marcel Dzama was born in 1974 in Winnipeg, Canada, where he received his BFA in 1997 from the University of Manitoba. This will be the artist’s twelfth solo exhibition at David Zwirner since joining the gallery in 1998.

Dzama has exhibited widely in solo and group presentations throughout the United States and abroad. Marcel Dzama: Tonight We Dance, a major survey of the artist’s work, was on view at the Sara Hildén Art Museum, Tampere, Finland, from September 25, 2021, through January 23, 2022. In 2021, Dzama had a solo exhibition at the Savannah College of Art and Design Museum of Art, Georgia. In 2018, the solo exhibition A Jester’s Dance was shown at the University of Michigan Museum of Art in Ann Arbor. In 2017, La Casa Encendida in Madrid exhibited Drawing on a Revolution, a solo show of the artist’s work. In 2010, a major survey of the artist’s work was held at the Musée d’art contemporain de Montréal in Montreal.