Marc Brandenburg’s exhibition Snowflake presents a series of new drawings that explore the conditions of life at the fringes of society. 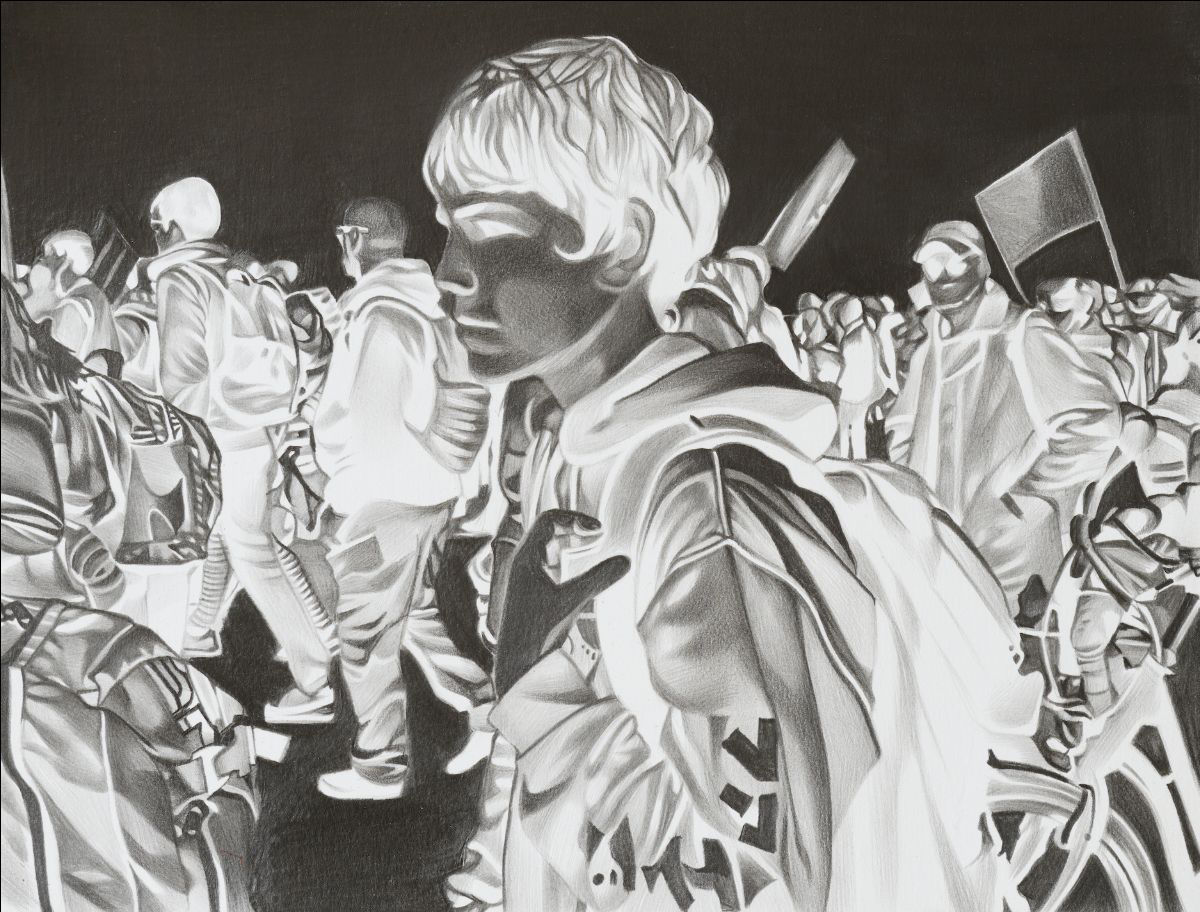 Referencing Chuck Palahniuk’s 1996 novel Fight Club in the exhibition’s title, Brandenburg addresses attributes that are increasingly the object of censure and ridicule in contemporary society: sensitivity, vulnerability, trauma, a lack of stamina, and the understanding of uniqueness as innate to all individuals. Larger-than-life scenes from a protest march are presented alongside smaller images of faceless figures – masked, heads bowed, or fully covered – severed from their surroundings and appearing cocooned or in free-fall amidst an expanse of undefined space.

With an oeuvre that encompasses drawing, photography, performance and installation, Brandenburg’s unique pencil drawings and his innovative modes of immersive display form a distinctive and acclaimed element of his practice. Experienced in an immersive black-lit room, the exhibition offers a totalising experience, alluding to the photographic methods that inform Brandenburg’s production as well as to the severing from social rhetoric that occurs as a result of these processes and in the real, lived experiences of many of his subjects. Lit by an unearthly UV glow amidst the darkness, the drawings appear as abstract stills drawn from a film. Inverting light and dark values, the resultant images radically expand the possibilities of drawing and function as springboards into bizarre parallel world(s), reduced to their fundamentals and freed from explicit social or political narrative.

Born in 1965 in Berlin, where he now lives and works, Brandenburg grew up in Texas and Germany. Self-taught, he draws from a range of sources, including film, literature, urban cultures of the mid-twentieth century, activism and social segregation to consider themes of nonconformity, performance, difference and isolation. Taking long walks through the cities of Berlin and Barcelona, the artist photographs the people, groups and scenes he encounters, which he then isolates from their surroundings and develops inversed, transposing black for white, before completing his pencil reproductions with meticulous attention to detail and form.

Through images of roles and bodies, of costumes and rituals, of elements outside the social norm, the artist explores a sense of transience and temporality. Depicting drug users, street performers and improvised shakedowns (or acts of bribery and extortion) as isolated and suspended moments, Brandenburg’s drawings freeze otherwise fleeting scenes in a state of permanence. The exhibition’s title, Snowflake, evokes the topics he addresses – the white of the paper, the idea of drawing as crystallisation and the act of arresting time – and is embodied in the practices of representation and display that inform the exhibition. It alludes to the word’s use in increasingly divided societies as a metaphorical insult, employed by and aimed at varying political, social and generational groups since it was first coined by Palahniuk over 50 years ago.

Coalescing the motif of the snowflake with his subject matter, the artist invites visitors to consider the experience of homelessness, understood both literally and as the absence of self or the loss of control – a ‘mythic’ homelessness – and the widespread sensibilities of precarious existence. As with the evolution of the term ‘snowflake’ – its descriptive function an ever-changing social construct – Brandenburg’s figures are presented not as individual identities, but as signifiers of socially constructed groupings. Lacking backgrounds, features or facial expressions, they become objects awaiting imposed identities and narratives. Their anonymous status as empty signifiers calls into question broader considerations of both embedded stereotyping and its inherent subjectivity.

Only the form, the surface remains, at once material and psychological, often stretched or distorted … Brandenburg’s pictures subtly examine the ways in which bodies move in urban public space, posing questions about power, class and territory … in their poetic radicality, these pictures are embedded in a long subversive tradition … They insistently embody that very sensibility which causes every snowflake-hater to cringe. – Oliver Koerner von Gustorf, 2020.

With special thanks to Oliver Koerner von Gustorf for his research and writing on this series.