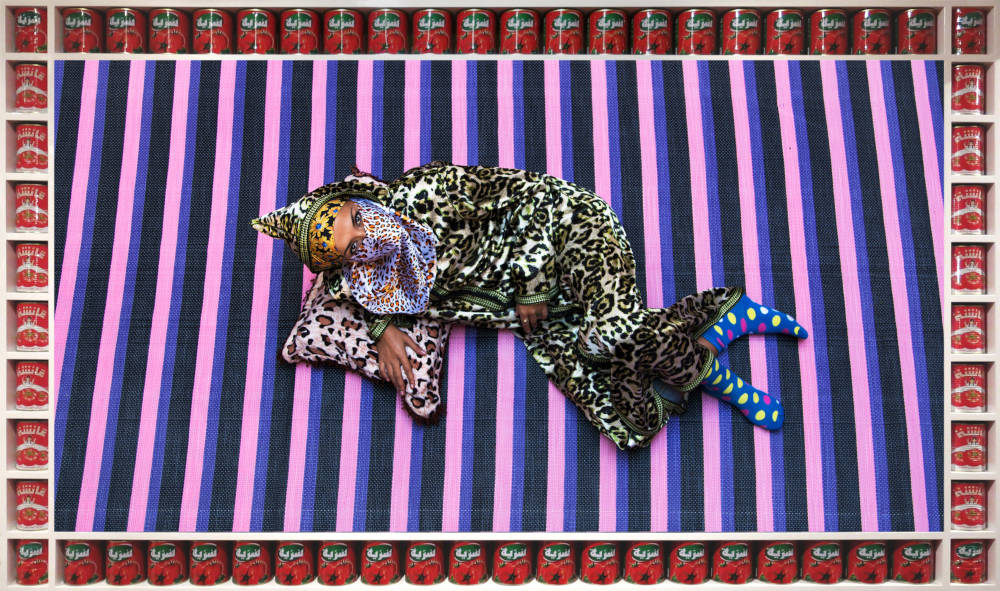 The MEP is delighted to present Hassan Hajjaj’s first retrospective in France by giving him carte blanche to re-think all of our spaces. This major exhibition, reflecting a 30-year career, features all of Hajjaj’s most important photographic series as well as video works, sculptural installations and furniture. Even the educational spaces and new bookshop will be included in a real first for the MEP.

Born in 1961 in Larache, Morocco, Hassan Hajjaj has since lived and worked in both London and Morocco. Equally influenced by the London cultural and music scene, and his North African heritage, his practice reflects his ability to build bridges between the two cultures. This is most evident in the photographic series he began producing in the 1980s using colourful compositions to mix and blend the codes of contemporary fashion photography and Pop Art, bringing together different styles, references and icons. But beyond the sometimes deliberately kitsch look and playful humour that these images exude, they also support the artist’s message. For if Hassan Hajjaj plays with the imagery of fashion brands, it is not only a response to the question of what constitutes “today’s new Pop Art”; but it is also a way of expressing his position on today’s consumer society, especially with respect to the act of wearing the veil. By picturing young veiled women engaging with pop art and fashion that often ignore them, the artist seeks to explore questions of identity politics.

Furthermore, this combination of statements and Pop Art aesthetic, is also reflected in the frames for his photographs, which he makes in three dimensions using products mainly from Moroccan consumer culture (tin cans, tubes of harissa, and so on) and which become an integral part of the artwork. It is no accident that Rachid Taha gave Hassan Hajjaj the nickname Andy Wahloo*, an aphorism Hajjaj prints on his clothes, within his installations, and which is the name of the bar in Paris whose interior he designed.
* “I have nothing” in Arabic.

Exhibition produced in collaboration with Fotografiska.

PART 1 – VOGUE : THE ARAB ISSUE
The first room highlights the artist’s interest in the world of fashion and clothes— as well as its contradictions. The works on display reference, with some irony, the regular fashion shoots that take place for magazines in the Medina of Marrakesh and Casablanca. However, instead of the European models who are usually photographed, Hassan Hajjaj presents a series of portraits of Moroccan women wearing his own designs, which are most often influenced by traditional Moroccan clothing.
These posed tableau are accompanied by portraits showing women wearing traditional Hijabs, and are echoed by a series of hand-painted portraits also depicting veiled women, against vividly coloured backgrounds.

PART 2 – U-LOT INSTALLATION; “LEGS”, “GNAWI RIDERS” AND “KESH ANGELS” SERIES
Vogue: The Arab Issue is followed by works from different series, as well as a new video installation titled U-LOT, where Hajjaj pursues his exploration of the ambiguous status of the veil in contemporary society. In conjunction he shows the “Legs” series, featuring photographs that are cropped in an unusual way, highligh- ting the legs of models wearing clothes with very different cultural origins. This work marks a transition between the first part of the exhibition, which is rooted in the world of fashion and clothing in general, and the rest of the show which is more focused on the daily lives and lifestyles of the models. In these images traditional items and major luxury brand logos are seen side by side. Lively and colourful, like all of Hassan Hajjaj’s work, they resonate with his fashion creations and once again reflect the influence of Pop Art and his connections with, and fondness for, his native country:
“I especially love Morocco’s light and colours. I love all colours, but especially a mish-mash of colours: I’ve learned not to be scared of mixing everything together. Music is also very important to me and I listen to it while I work. Maybe you can tell – the images and the frames have a kind of rhythm”

This section of the show continues with two series presented side by side: “Gnawi Riders” and “Kesh Angels”. In the first, Hassan Hajjaj has photographed gnawa musicians from the traditional culture of the same name. All his models are men striking the same pose on motorbikes: with one foot on the ground.
The title of “Kesh Angels” takes its inspiration from Hells Angels gangs and references the abbreviated nickname of Marrakesh (“Kesh”). These are portraits of women who wear djellabas, scarves, veils or other traditional items that contrast sharply with the surprising modernity of certain details, such as vividly coloured fabrics, leopard prints, sunglasses, or shoes imitating high-end luxury brands. Proud and defiant, they pose on their motorbikes on which they ride around Marrakesh.

PART 3 – MY ROCKSTARS
The series “My Rockstars” is a vibrant tribute to the personalities that form the backdrop for Hajjaj’s cultural life from London, North Africa and elsewhere: not only internationally famous artists, but also friends and acquaintances of Hassan Hajjaj who are unknown to the general public. Most of the models, selected subjectively by the artist, are musicians working in a variety of styles, for example hip-hop, jazz and gnawa. They include Rachid Taha, Keziah Jones and Hindi Zahra. A few days before the shoot, Hassan Hajjaj selects the décor and clothes to create an overall setting. This preparation gives a lot of freedom to the model, to whom Hajjaj gives a predominant role: the picture is not just Hassan’s photograph, but a photograph of an actual person. The work is a collaborative process where the model has to convey his or her character and tastes, sometimes by suggesting accessories and even the setting for the shoot.

PART 4 – BLACK AND WHITE PORTRAITS
The exhibition ends with an extensive selection of never previously exhibited photographs in black and white from throughout Hajjaj’s long career: these portraits, group photographs, and more documentary-like street scenes are in marked contrast to the colourful photographs that precede them in the show.

But whatever the series, the model or the colour of the photograph, Hassan Hajjaj reminds us: “I wanted to show the world what I saw of the country and its people – the energy, the attitude; the inventiveness and glamour of street fashion; the fantastic graphics on everyday objects and products; people’s happy outlook and strength of character”.

TRANSFORMATION OF THE MEP INTO THE MAISON MAROCAINE DE LA PHOTOGRAPHIE
Hassan Hajjaj is occupying all the spaces at the MEP for the exhibition from the Ateliers Pedagogiques to the Shop and Café. He is also inviting to two Moroccan guest artists who will be presenting their work successively in the Studio: Zahrin Kahlo (11.09-13.10) and Lamia Naji (18.10-17.11).

To make the MEP a real ‘Maison Marocaine’ Hajjaj will invest the building with
his unique world, presenting his wallpapers, rugs, furniture, objects and clothes. In addition to photography, design and recycling are at the heart of the work of Hassan Hajjaj, who combines ethnic influences, logos and everyday objects often from the basis of very simple everyday materials, taking all kinds of clichés and giving them a contemporary, sometimes deliberately kitsch form: soft drinks crates become benches, paint pots are made into stools, road signs and shop signs are turned into tables, and tin cans are transformed into chandeliers.