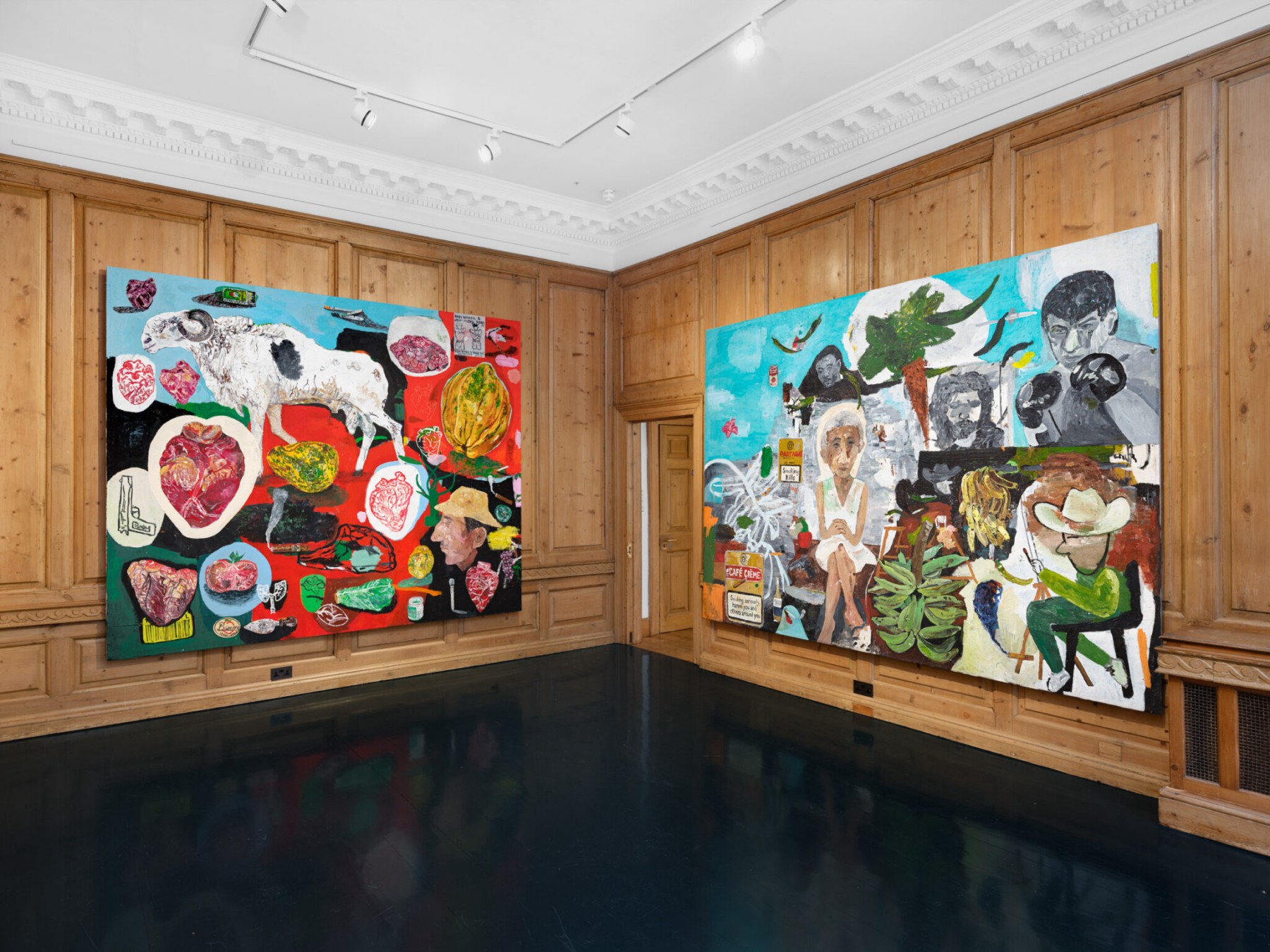 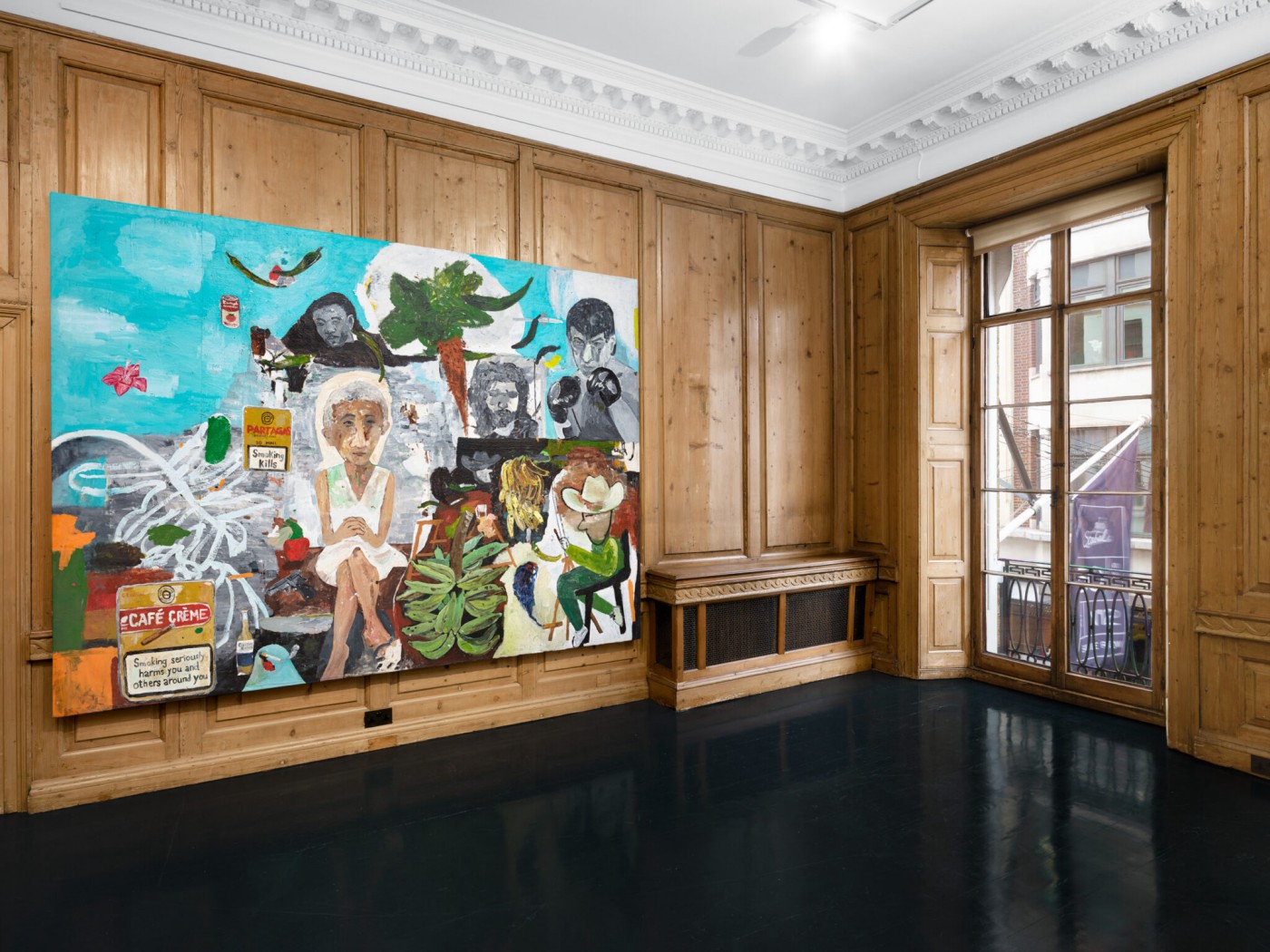 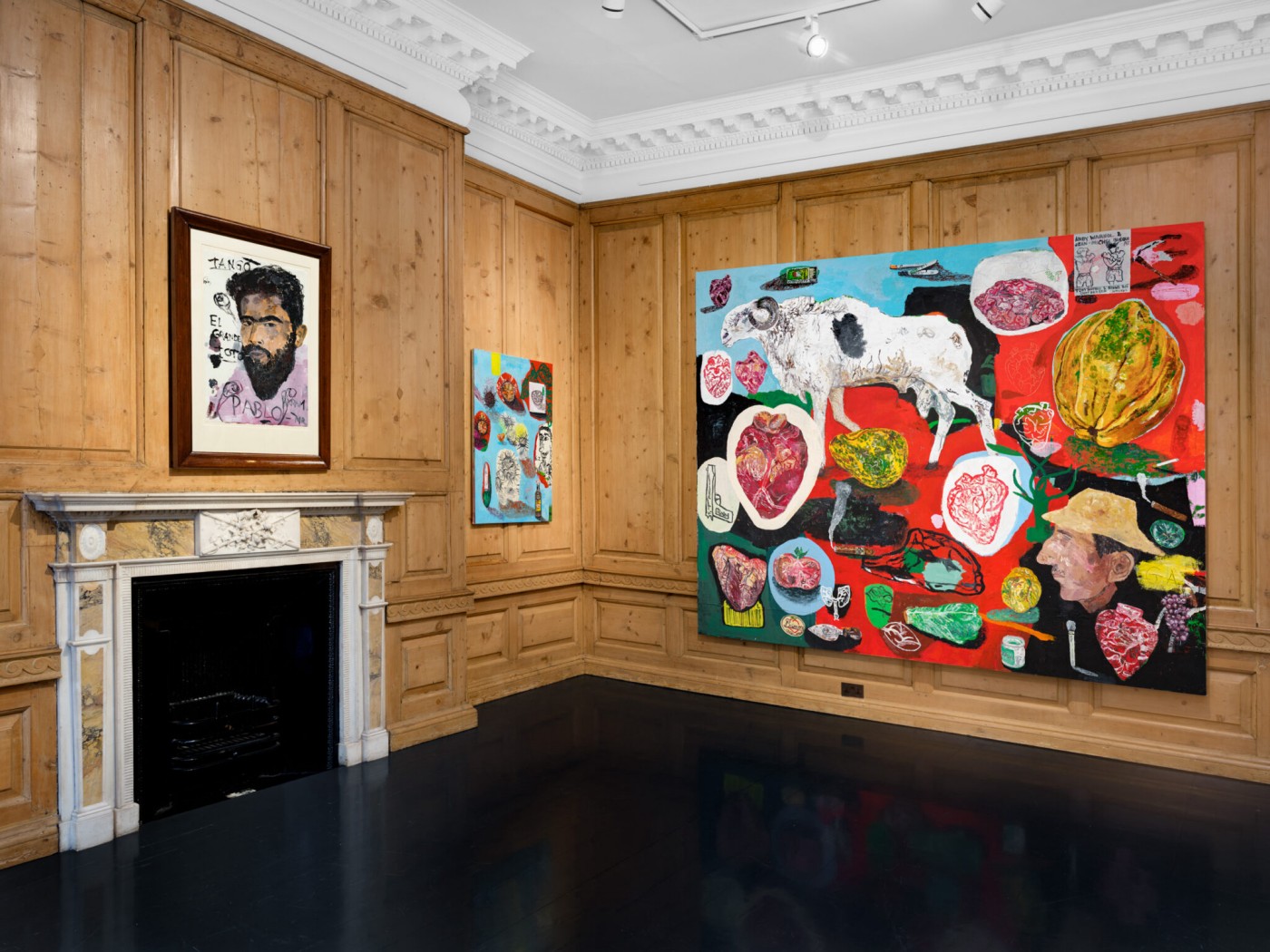 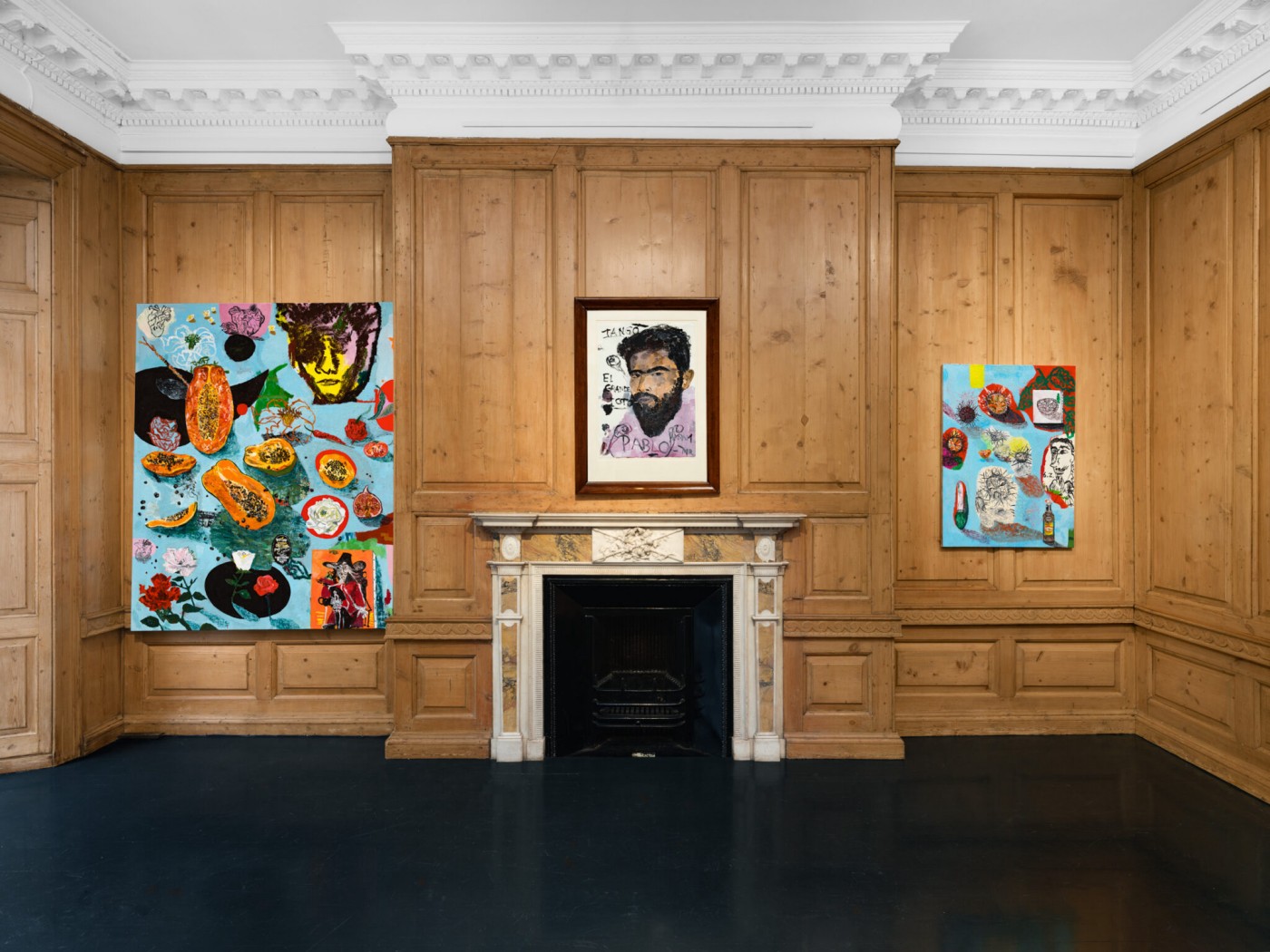 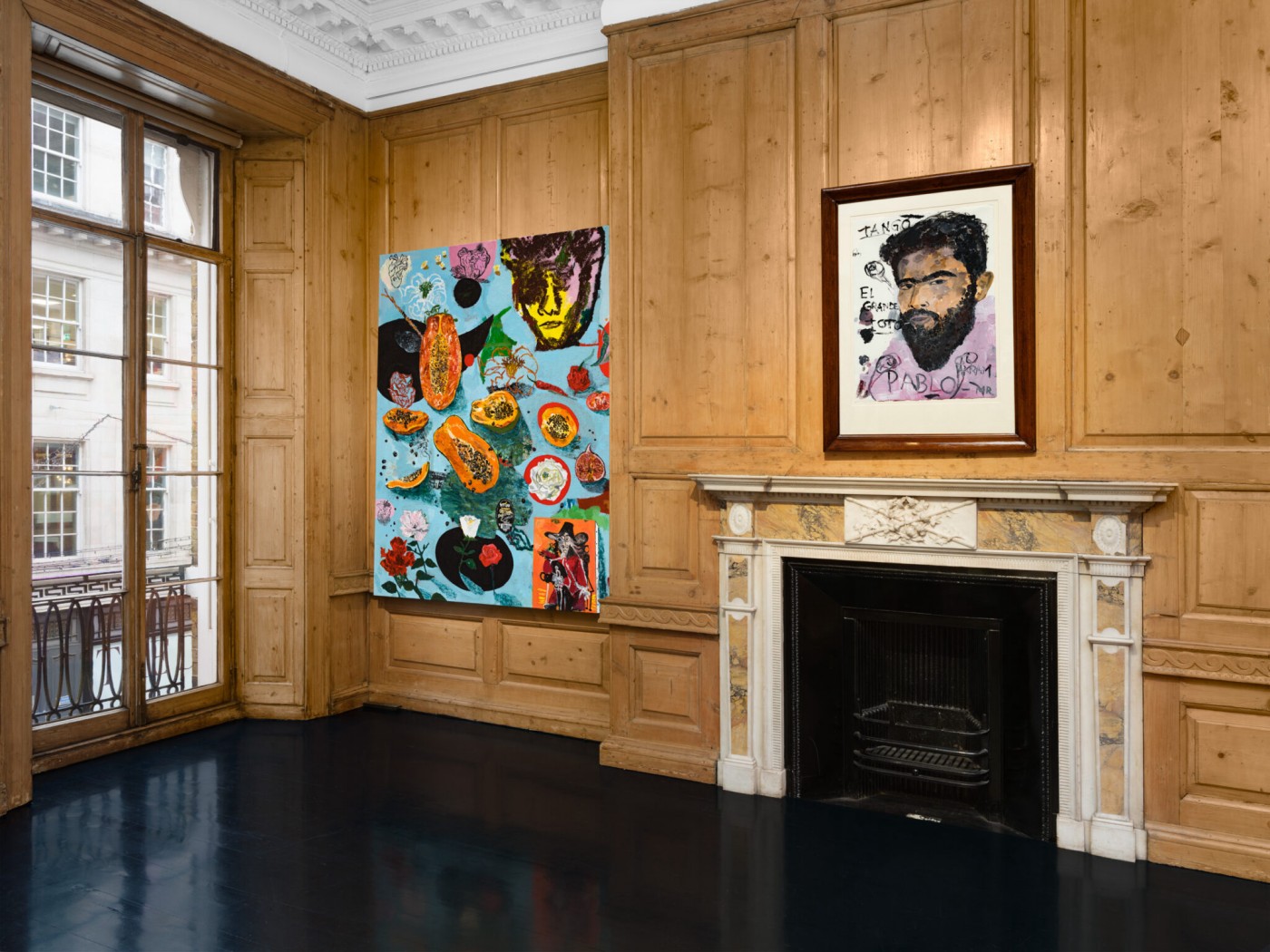 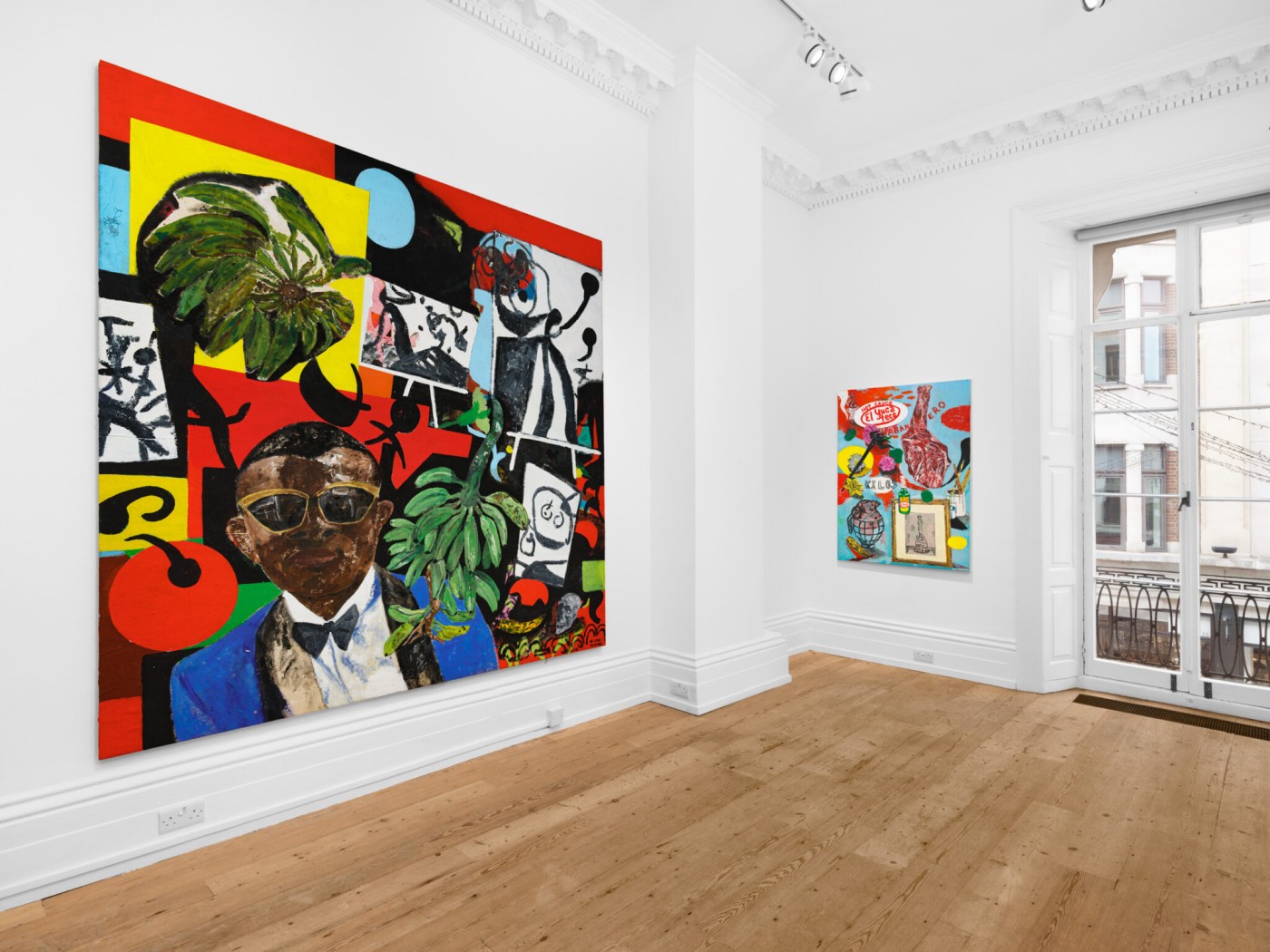 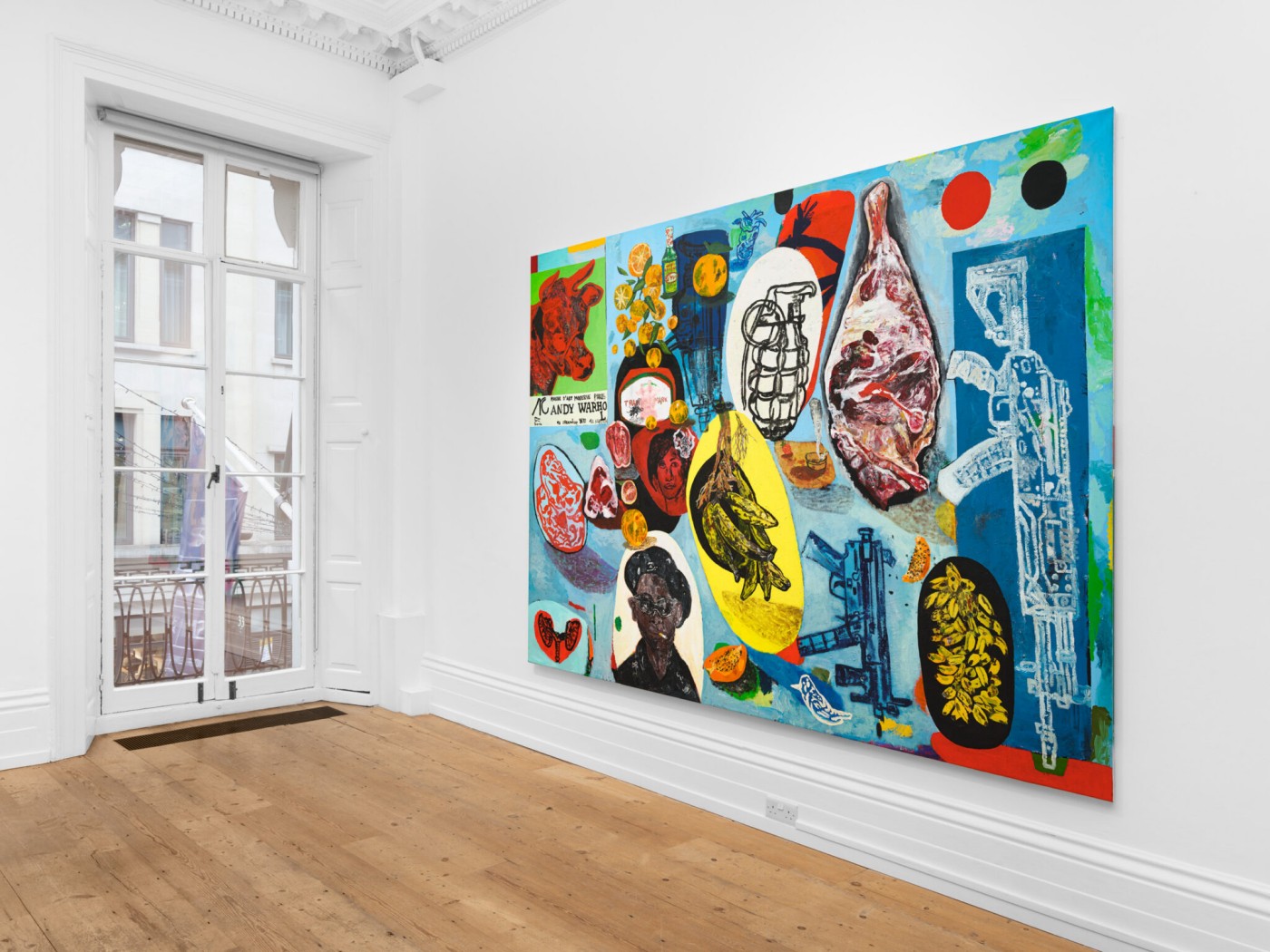 Maïa Régis (b. 1995, France) graduated from the Royal College of Art, London in the fall of 2019 with a Master’s degree in painting. Régis grew up in Paris and set up studio in London after graduating to begin working towards several exhibition opportunities.

The large-scale painting, Yamilka (230 x 310 cm) – exhibited here in the gallery’s Green Room – was begun in 2019. At the centre a woman wearing a white cotton summer dress is depicted seated with her hands in her lap and her legs crossed. The protagonist is surrounded by an array of objects, food, and plant life. Other figures also appear, all seemingly engaged in different activities. Selected from Régis image bank of thousands of images stored on her mobile device, the name Yamilka comes from a graffiti tag that Régis came across on a street wall in Havana, Cuba. As well as lending the title to the painting, it was coincidentally the name of one of the women featuring in a documentary that Règis mother, Caterina Pasqualino, directed at the time. The film captured the re-emergence of Santeria – a spiritual practice with West African roots that had up until recently been banned in Cuba. Its followers take guidance from orishas – sacred beings that reign over both human endeavours and the forces of nature. In Régis’ painting, Yamilka, smiling coyly, was originally photographed sitting on a street bench in Havana, perhaps as a result of recalling memories and wisdoms collected along the way. Or perhaps from a memory sequence in her favourite film, the tastes of foods, or from past time indulgences like smoking a cigarette.

In the winter of 2020, as Covid19 hit, Yamilka, along with several other of works had to be rolled up and transported to storage. Some of the works were brought over to Paris, which became the place from where Régis first quarantined together with her family, in a small apartment located in the 4th arrondissement.

Régis comes from a family of artists and creatives over several generations and she spent the first part of the quarantine making drawings from a rediscovered stack of faded paper in the basement of the same apartment building. The paper source originally belonged to her father, Luc Régis, an artist and researcher teaching art at the École Nationale d’Architecture de Versailles, and with whom Régis has had a constant dialogue about her work. The papers had been left in place since years before when Régis made art together with her father as a child.

Coincidentally, and shortly before Régis packed up her paintings in London, works by her great grandmother, artist and gallerist Lia Pasqualino Noto (1909-1998), had recently been unveiled, after decades in storage. Noto’s paintings were subsequently included in a curated group show, highlighting her work as part of a collateral event to Manifesta 12. The show was hosted in the artist’s original studio in Palermo, Sicily and also included works by other artists of note, such as Kiki Smith, Gelitin, John Armleder, Chantal Joffe, Morgane Tschiember, Athena Papadopulos and Maïa Régis. For that occasion, Régis exhibited an embroidered painting, La Cassata (260 x 220 cm), made in 2017.

In early spring of 2022, Régis was invited to make work for the group show, ‘Through a glass, Darkly’, curated by Katharine Kostyál, at Carl Kostyál in Milan, as well as to produce works for a subsequent solo show at their gallery space on Savile Row, London. Régis set up a studio in a semi-dilapidated palazzo in the heart of Palermo, close to the local market square, and a stone’s throw from Lia Pasqualino Noto’s old studio and gallery.

Anticipating the summer’s many heatwaves, Régis with help from her brother Jules – an architect and product designer – initiated a parallel studio on the more breezy Mediterranean island of Pantelleria. Yamilka, alongside several other works, equipment and foods, had to be re-packed up, shipped, unwrapped and re-stretched, as the work continued from one space to another. It was from these two premises that Régis produced these paintings, first in ‘Through a glass, darkly’, the group show at Carl Kostyál in Milan and now for her solo exhibition ‘Kilos’ at the London space.

The exhibition includes a dozen works; eleven paintings and one work on paper. The latter, El Grande Toto, 2022 (113 x 83 cm) hangs above the mantel piece in the gallery’s Green Room. It’s a portrait of a Moroccan rap artist, painted on vintage paper from the Paris batch, and displayed within an old frame salvaged from the Mercato delle Pulci flea market. Each of the eleven paintings in the show evoke their own yet interrelated story. Collectively, the disparate images and color fragments have been collaged together in unexpected ways. The paintings in ‘KILOS’ generate vibrant and at times humorous compositions and narratives. The works revel in a process not only of transformation, but also of translation, of spaces and objects. Bringing them into a state of visceral play: ripe fruits simply cut into halves; cheering voices coming from a local restaurant or bar; the smell of the sea from aboard a slowly moving ship; the grunts from a boxing match in a film, or the sounds on the News from anti-aircraft missiles fired into the sky.

The paintings in ‘KILOS’ weaves together a broad contemporary patchwork of images, of colour codes and a wide range of cultural references. Some are lived experiences, some are sourced, some are borrowed, but all are in praise of the in-between moments that makes up time as it passes each day, in staccato.

The twelve works in ‘KILOS’ recall and convey sensations and impressions channeled by Régis both during and long before our collective quarantine. Yet they were compressed during a self-imposed period of isolation and concentration over the summer of 2022. Her images are all sources of influence and memories captured and stored on her phone. Only to be tapped opened once more, perhaps in a contemporary Proustian flourish, and incorporated into her compositions of objects and motley cast of characters. The works in KILOS reel through the optics of time and place, creating an exuberant mapping across the three rooms of the exhibition at Carl Kostyál, London.

Courtesy of the artist and Carl Kostyál