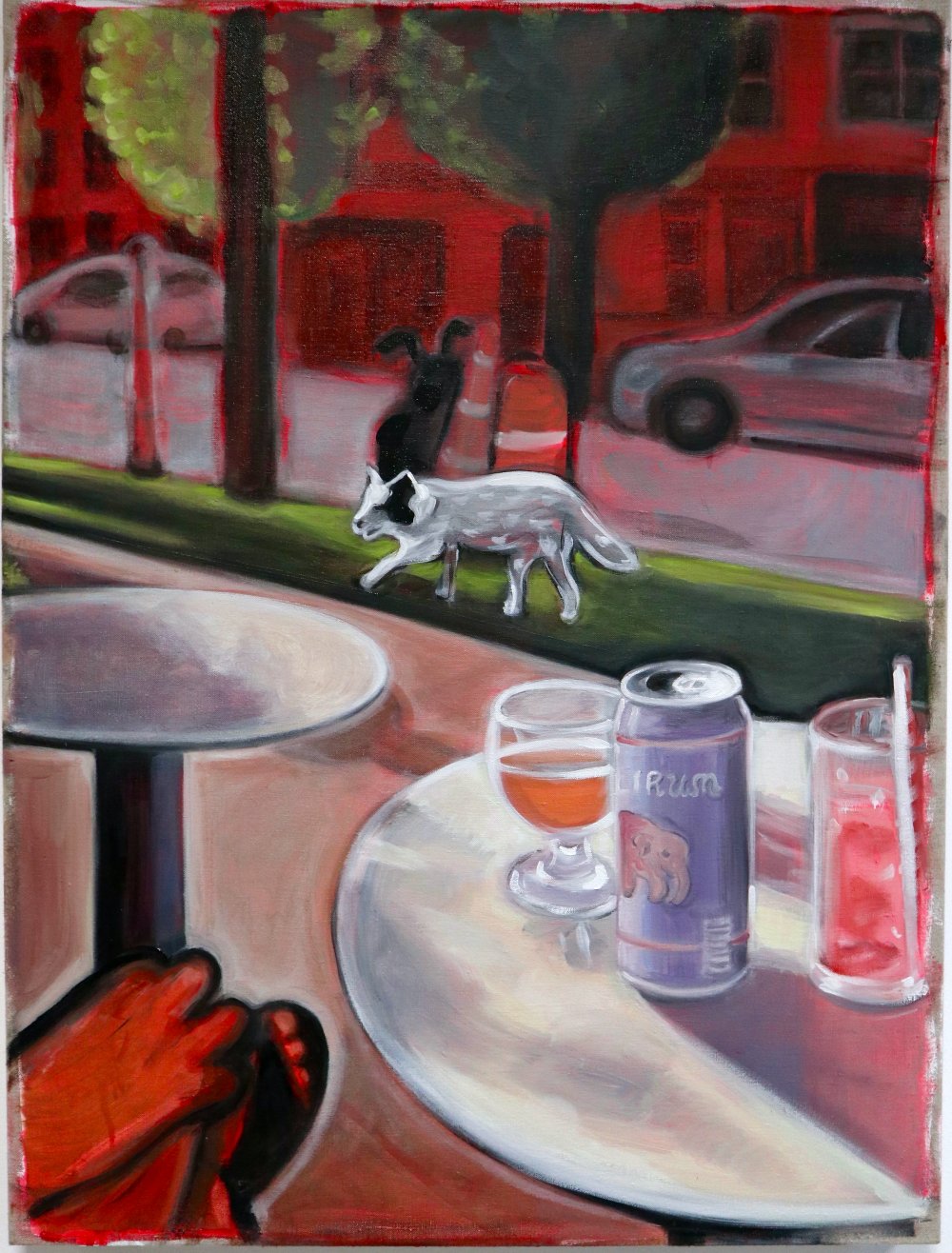 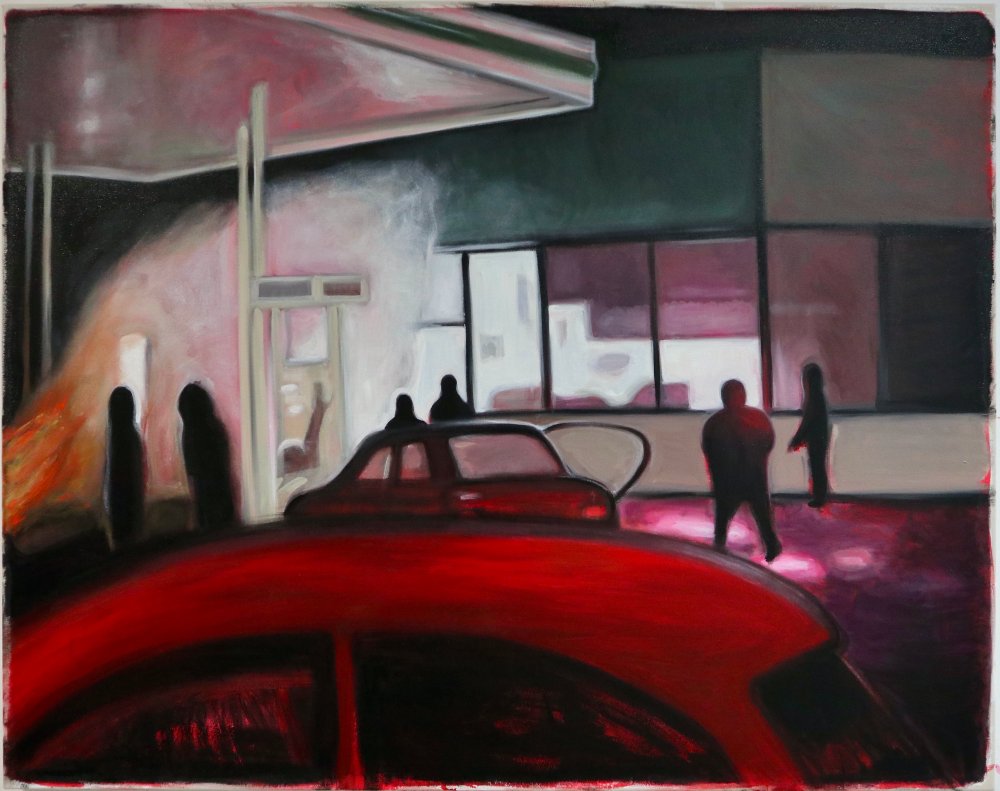 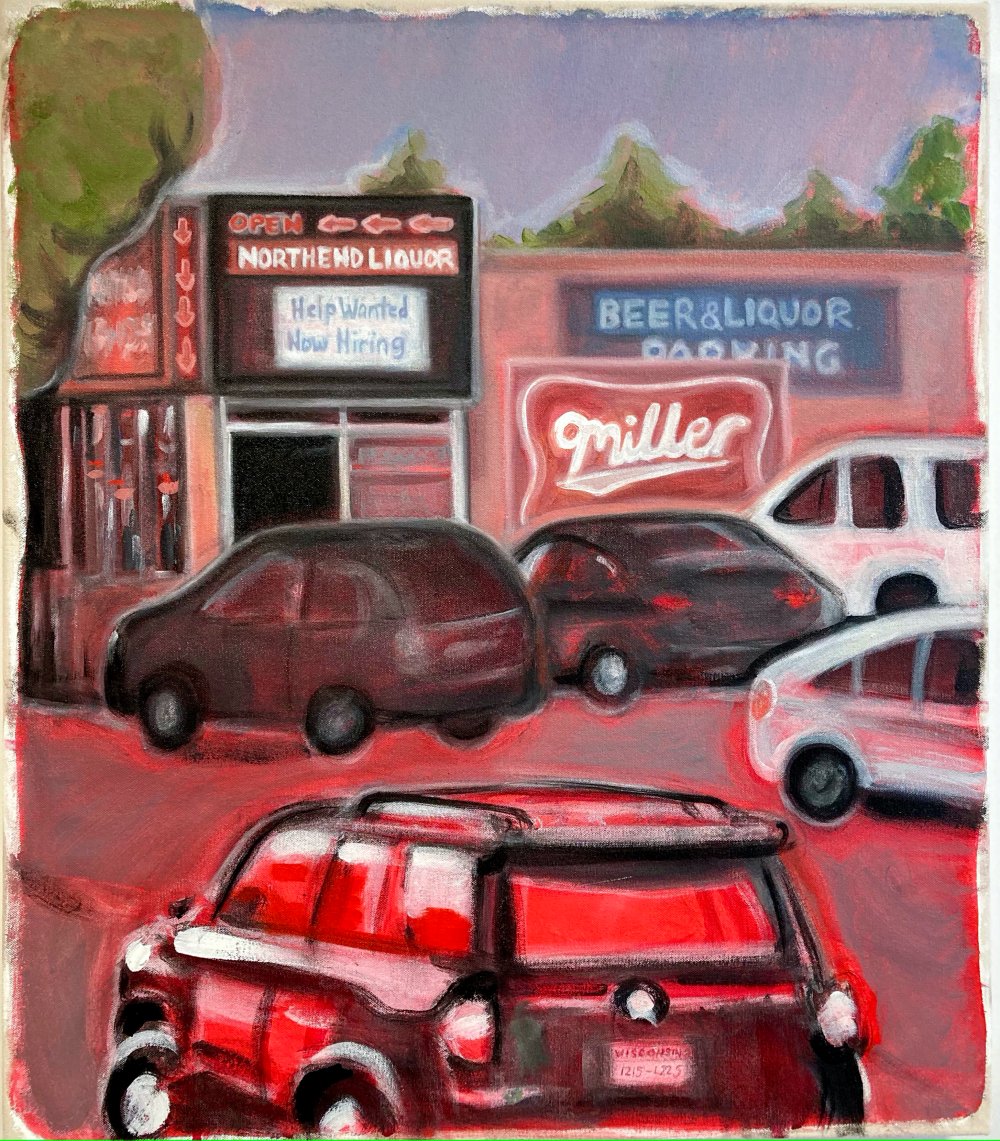 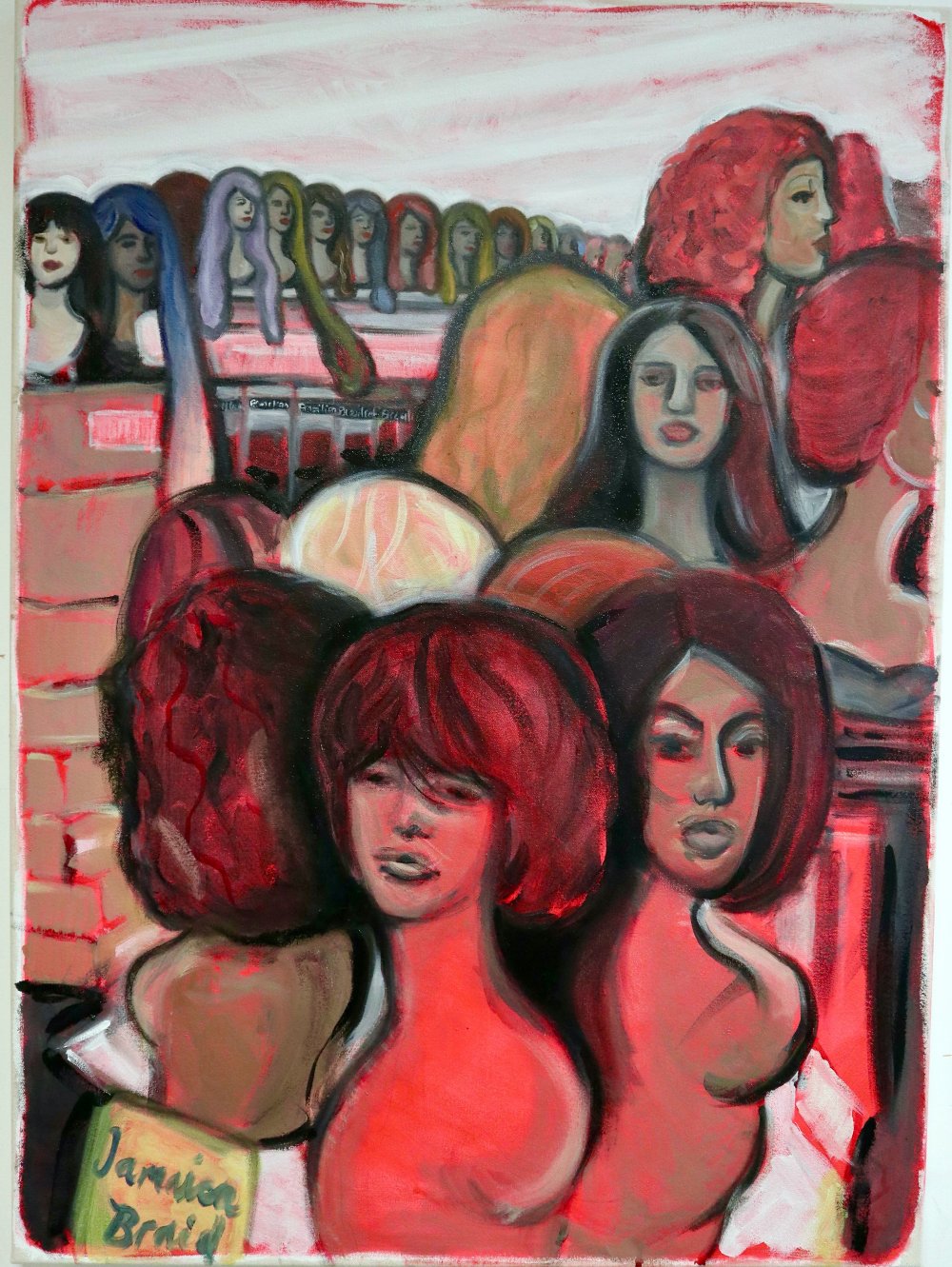 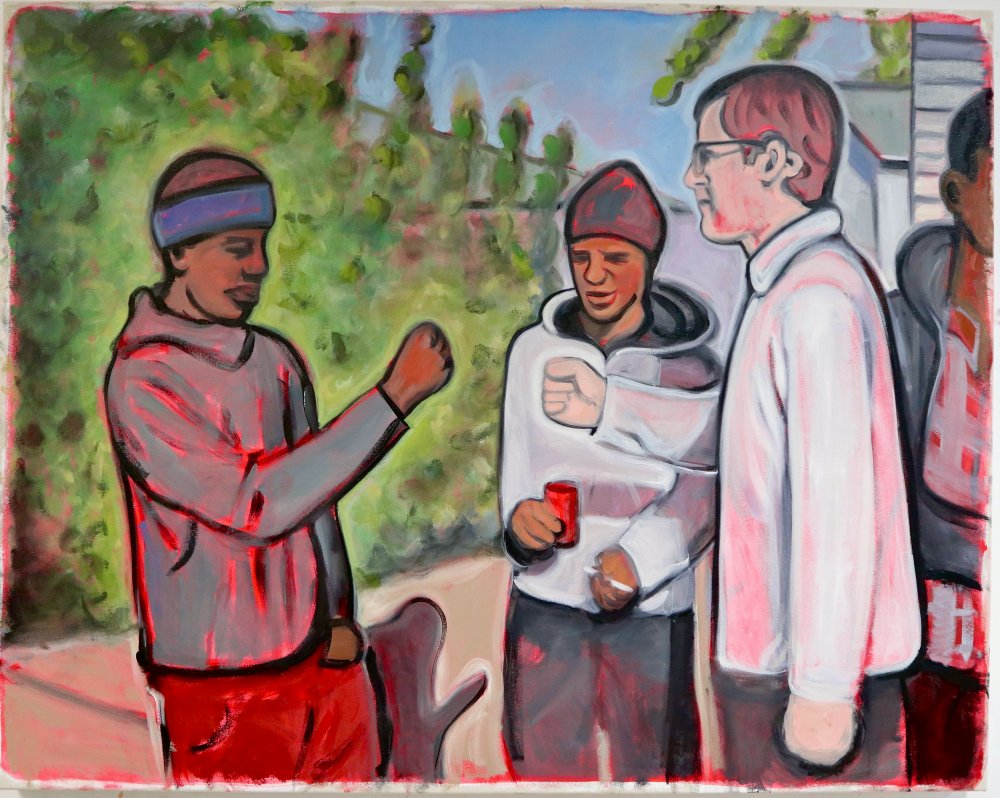 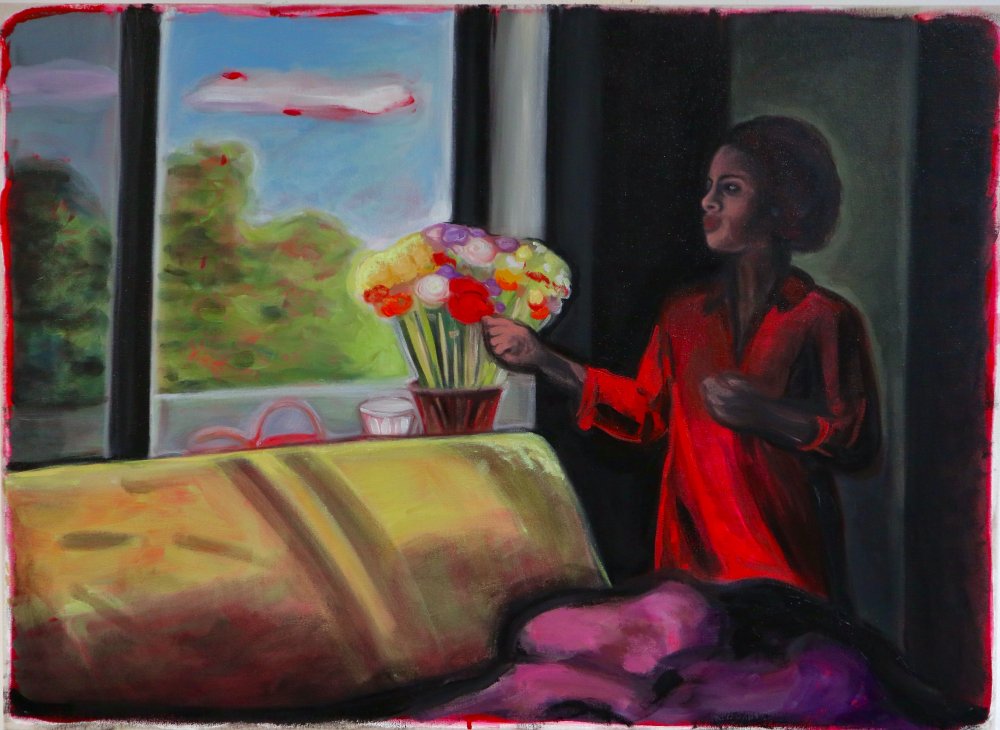 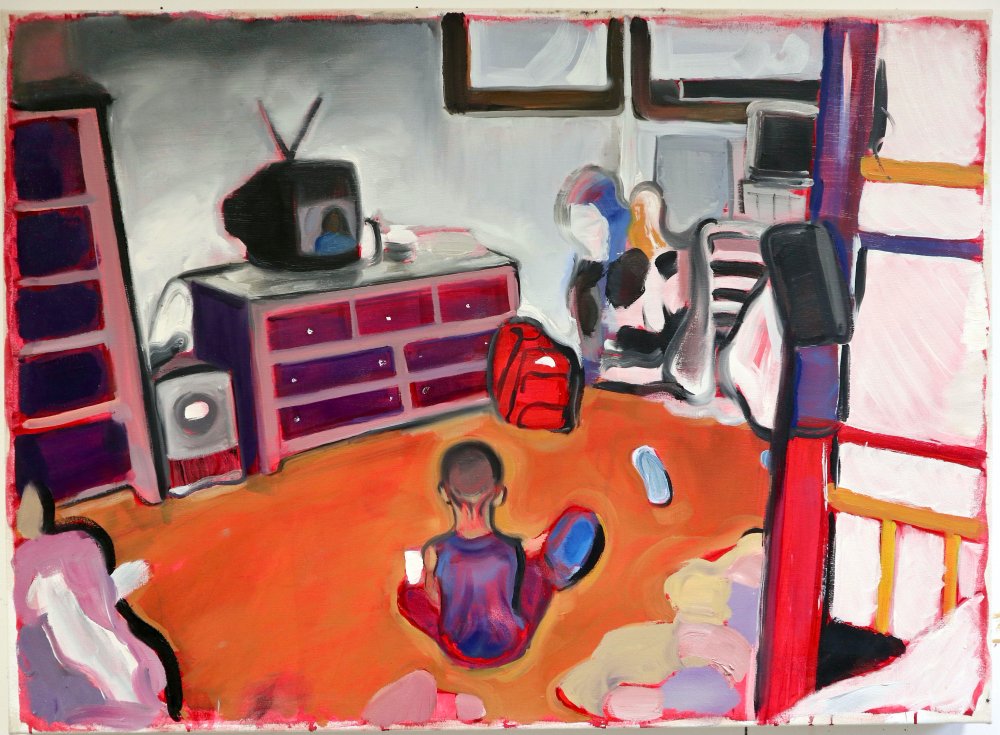 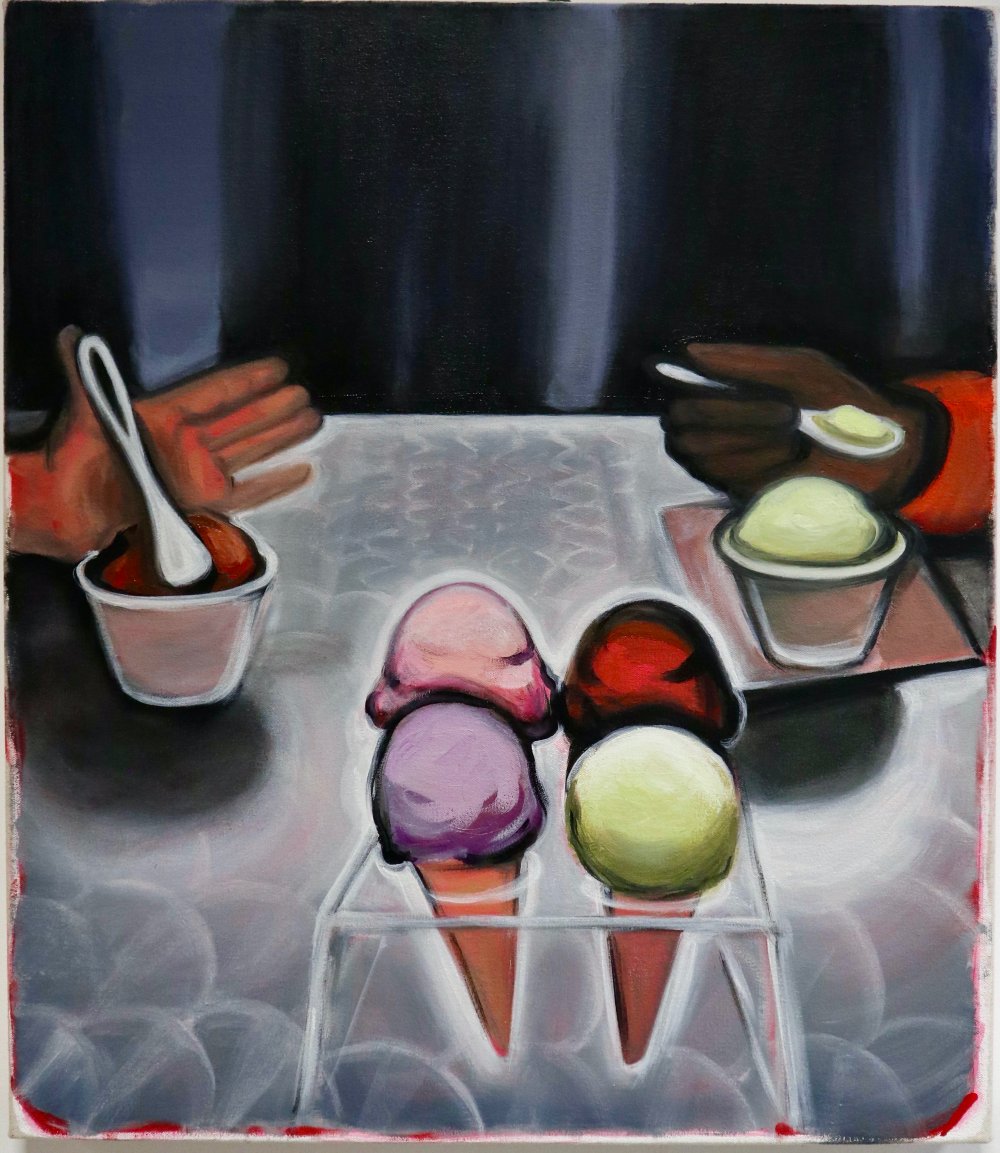 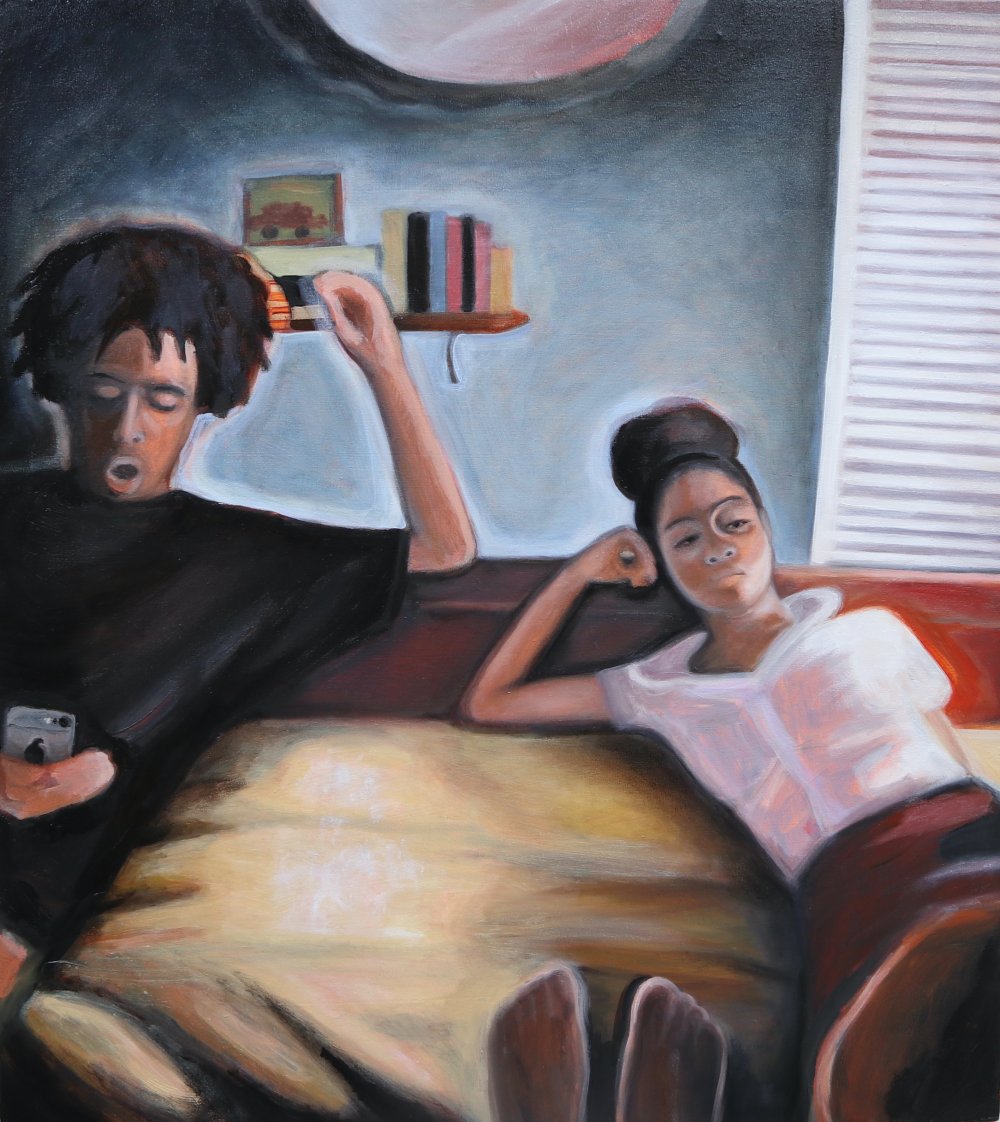 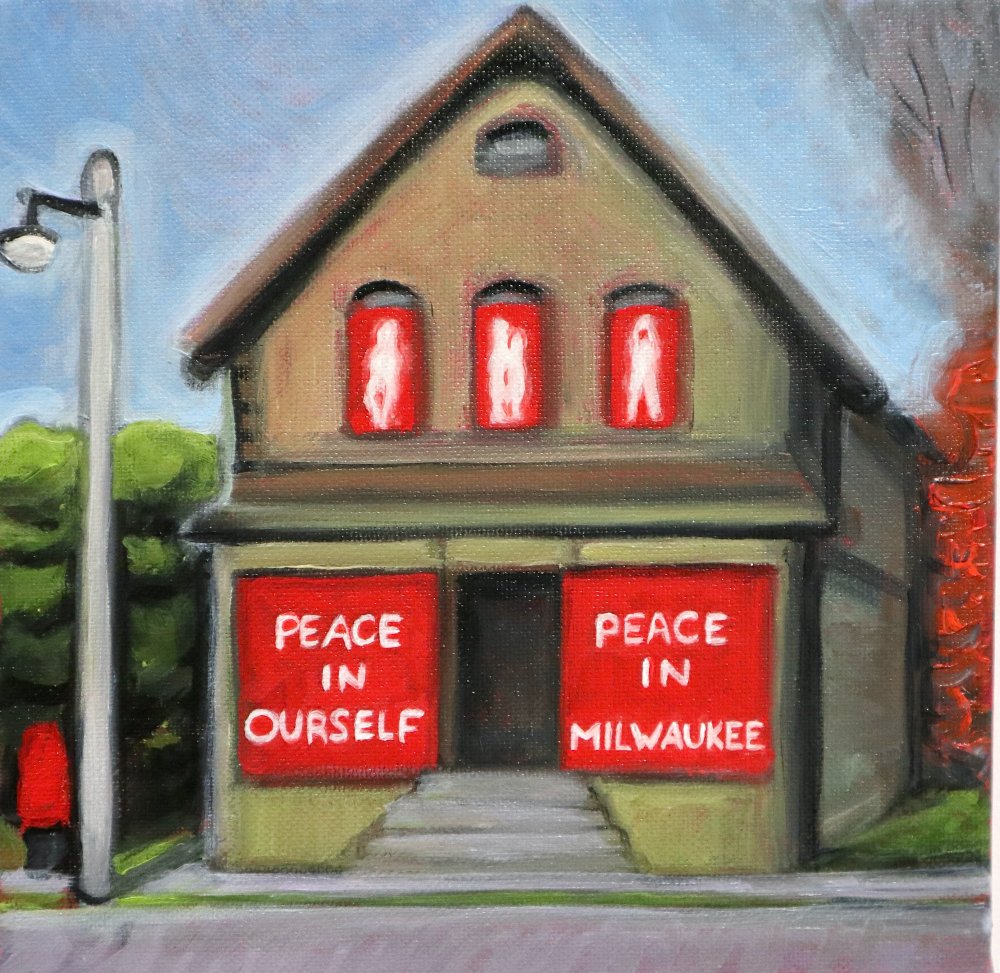 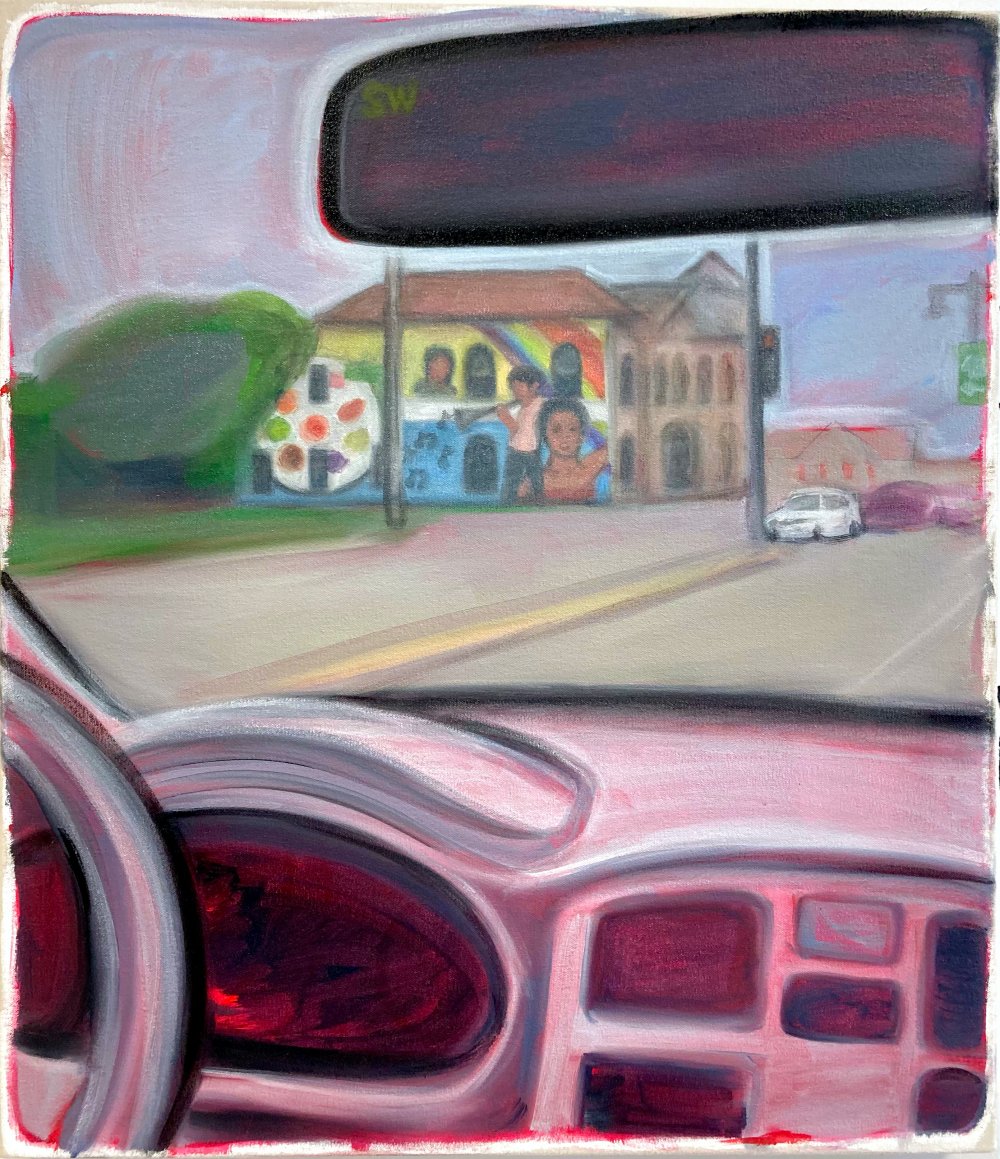 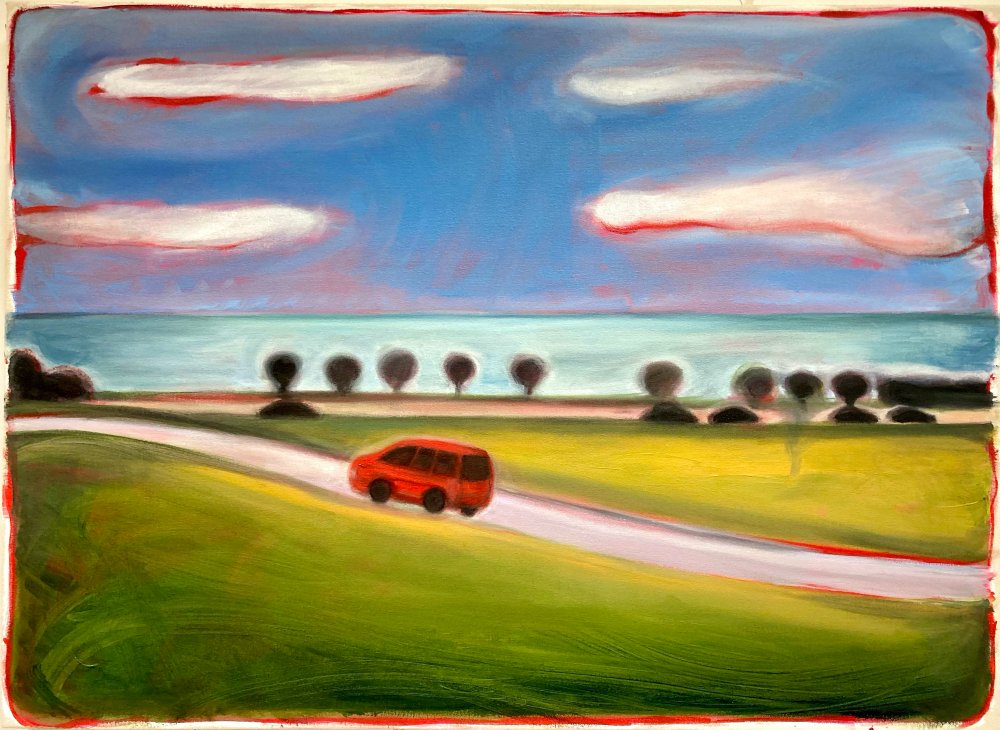 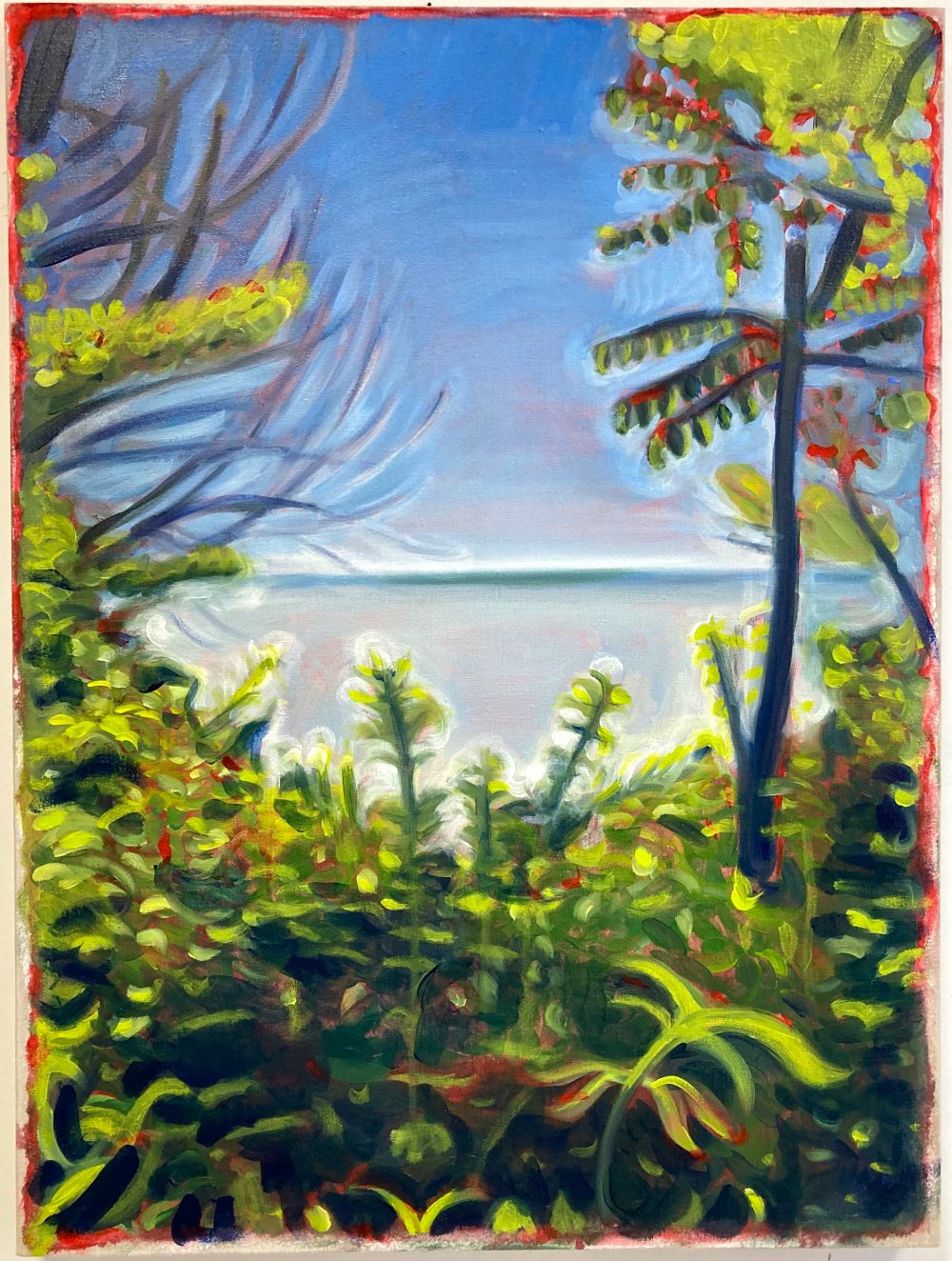 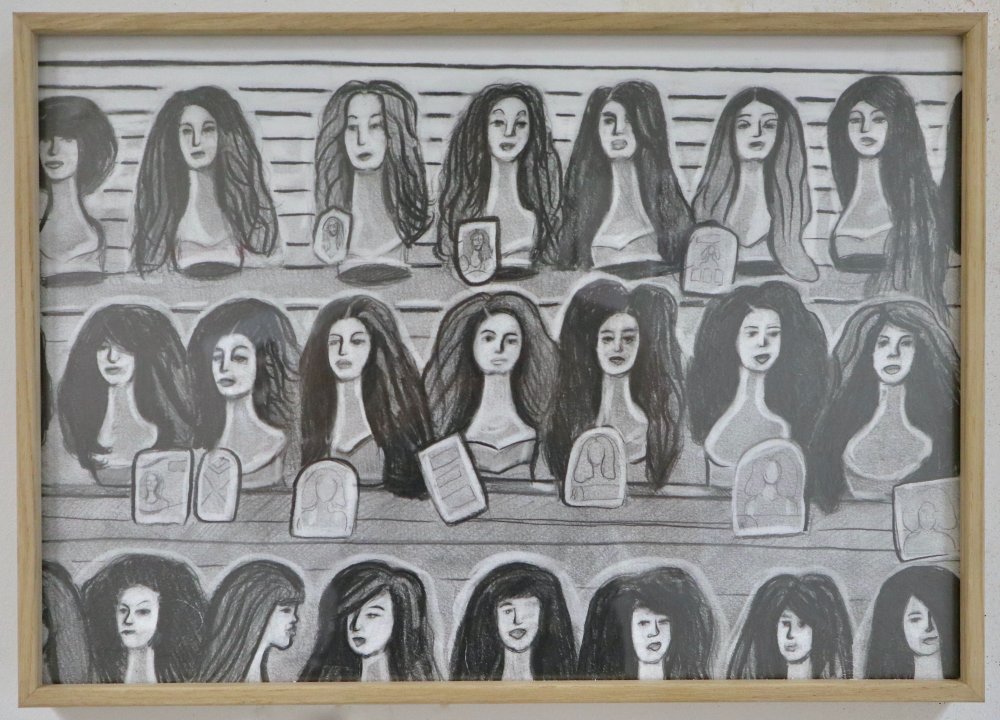 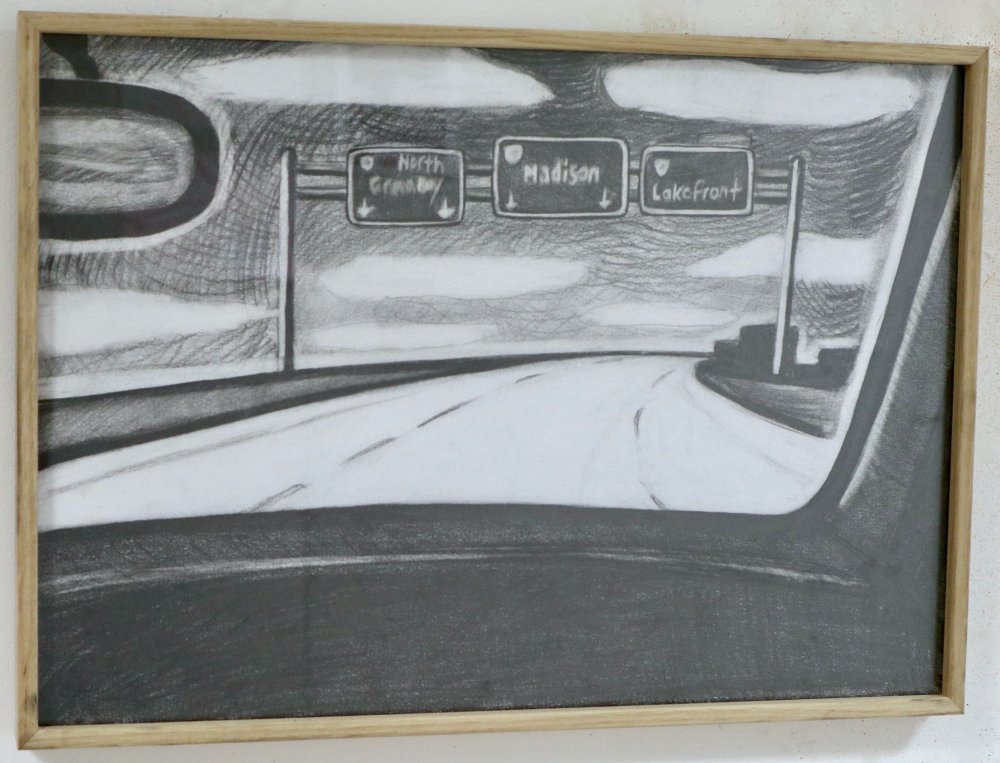 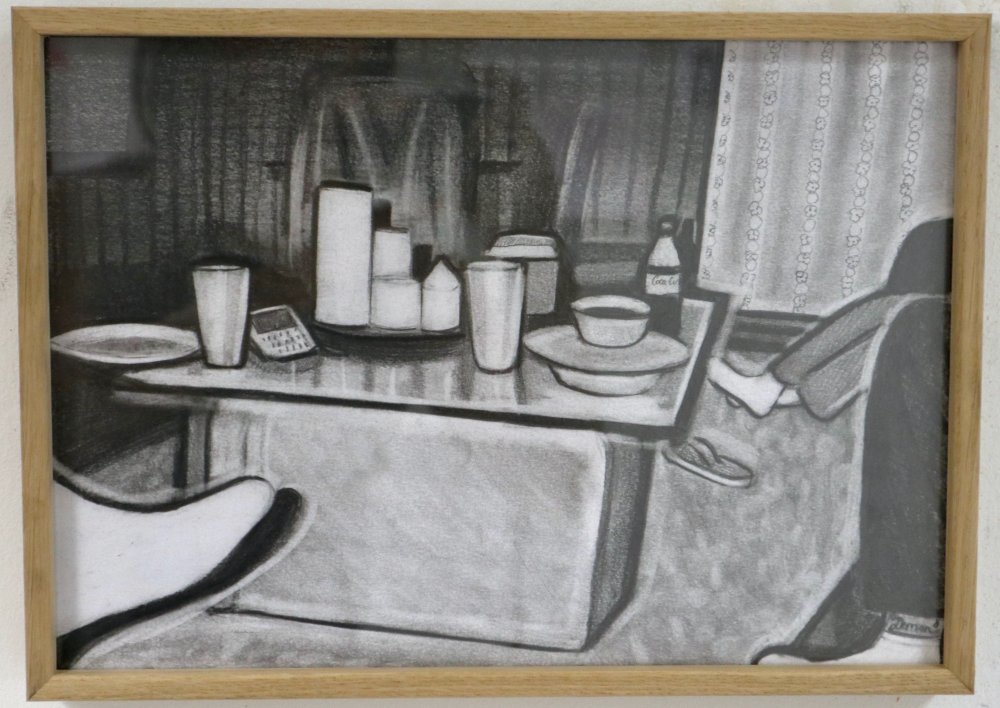 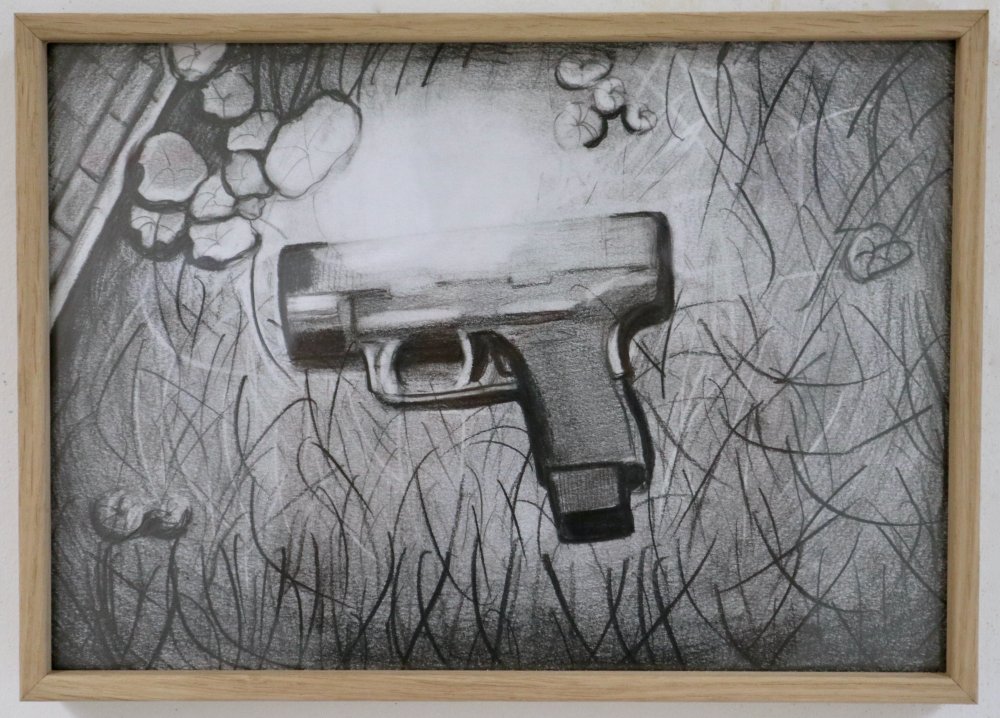 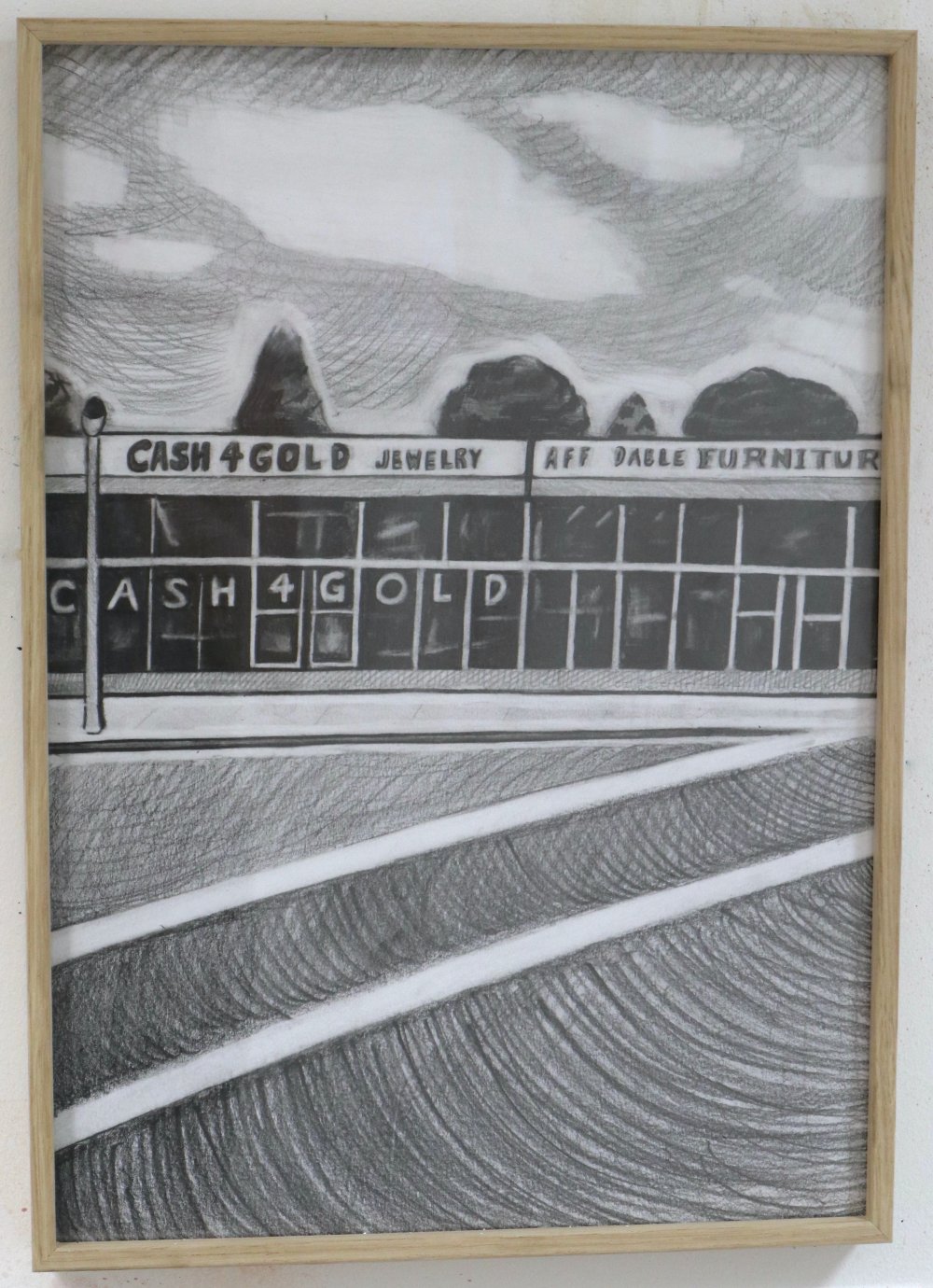 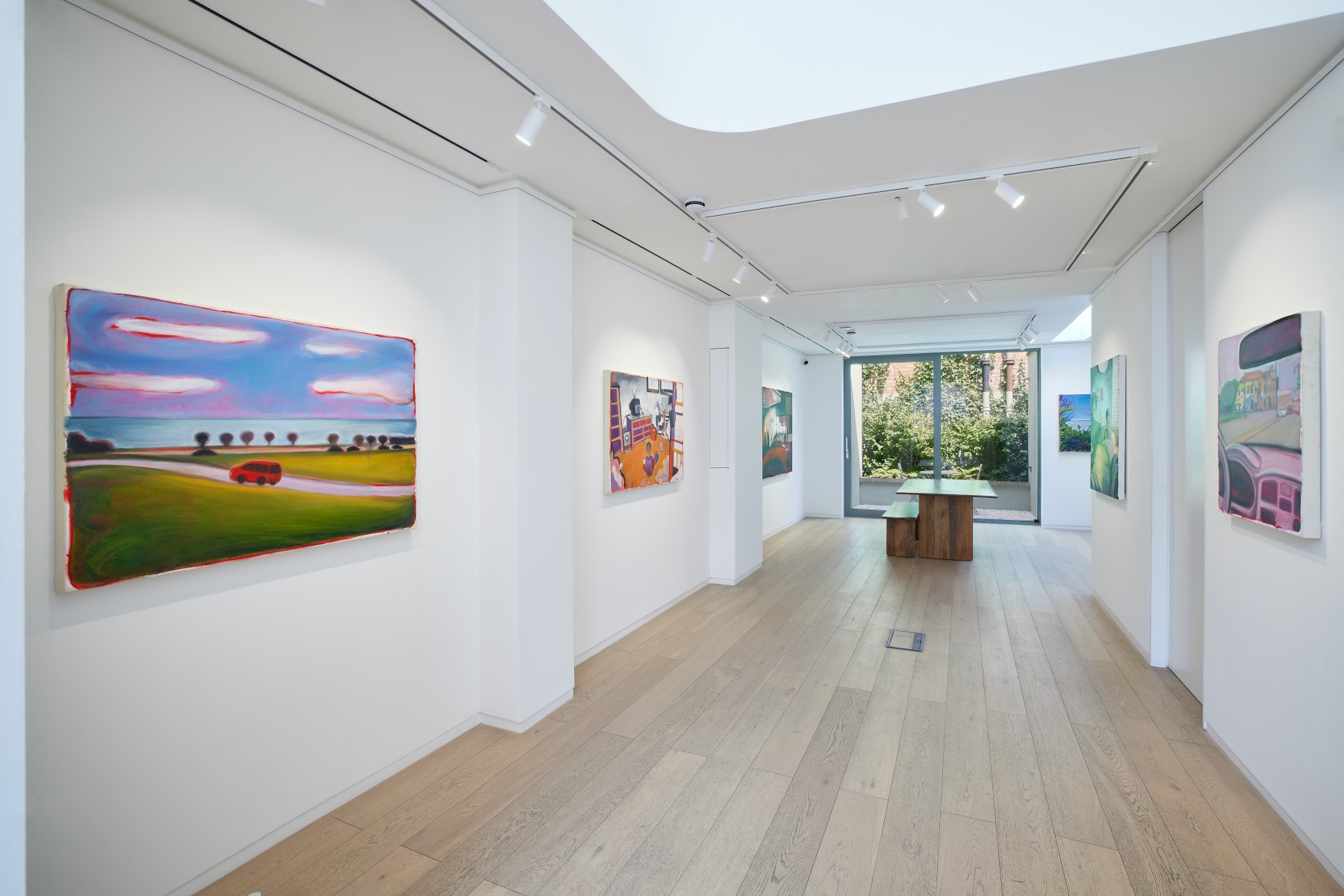 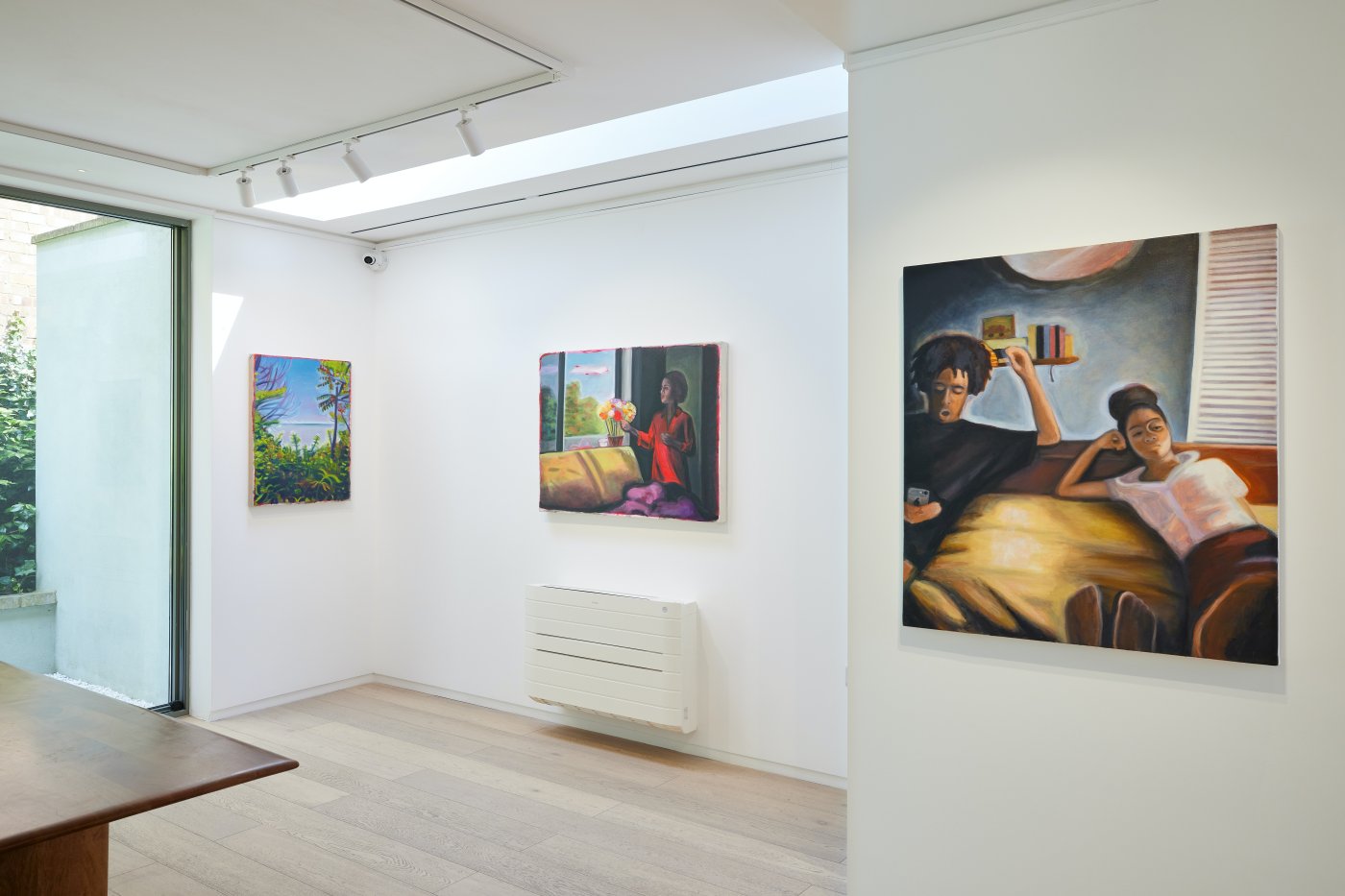 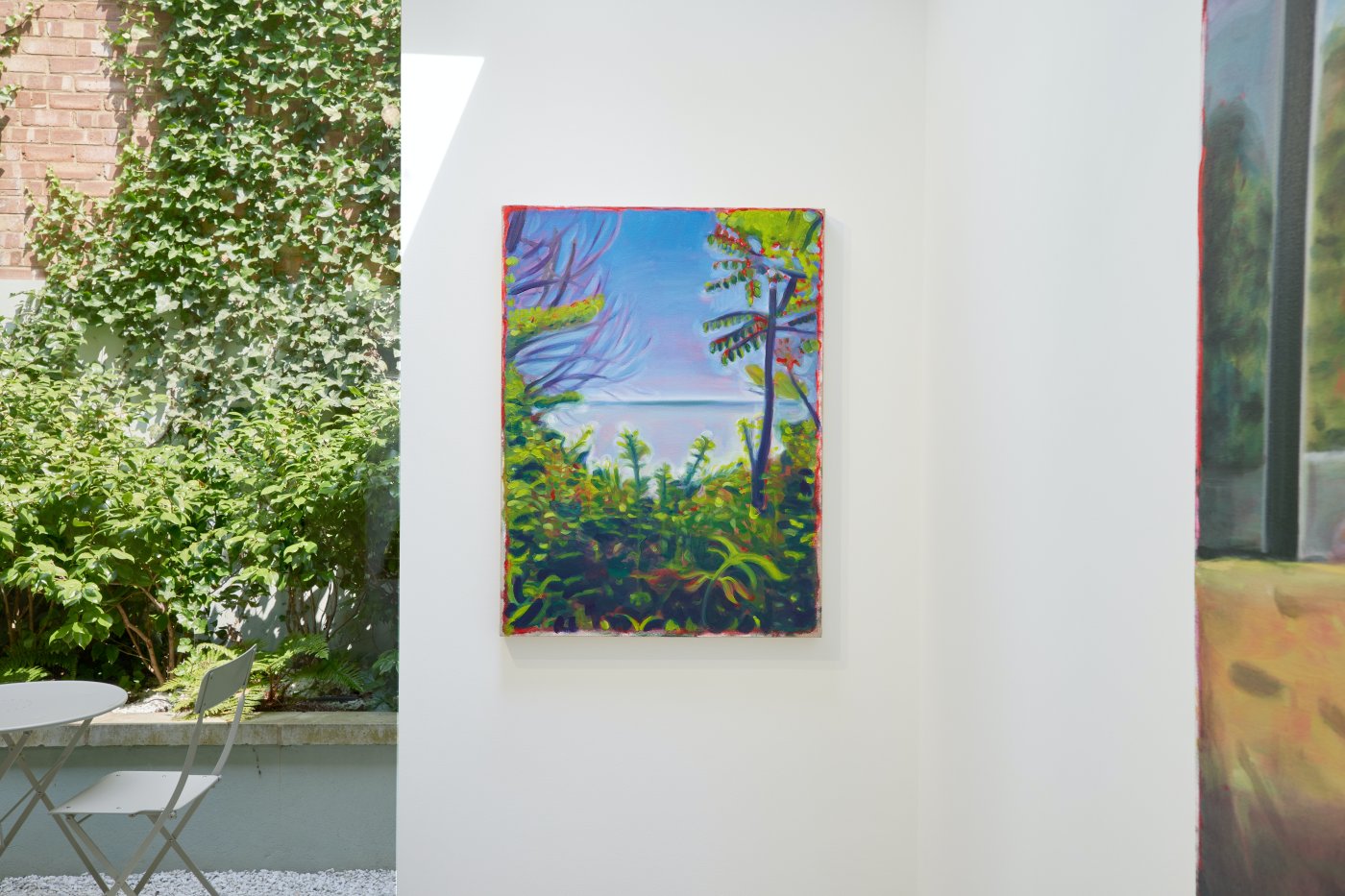 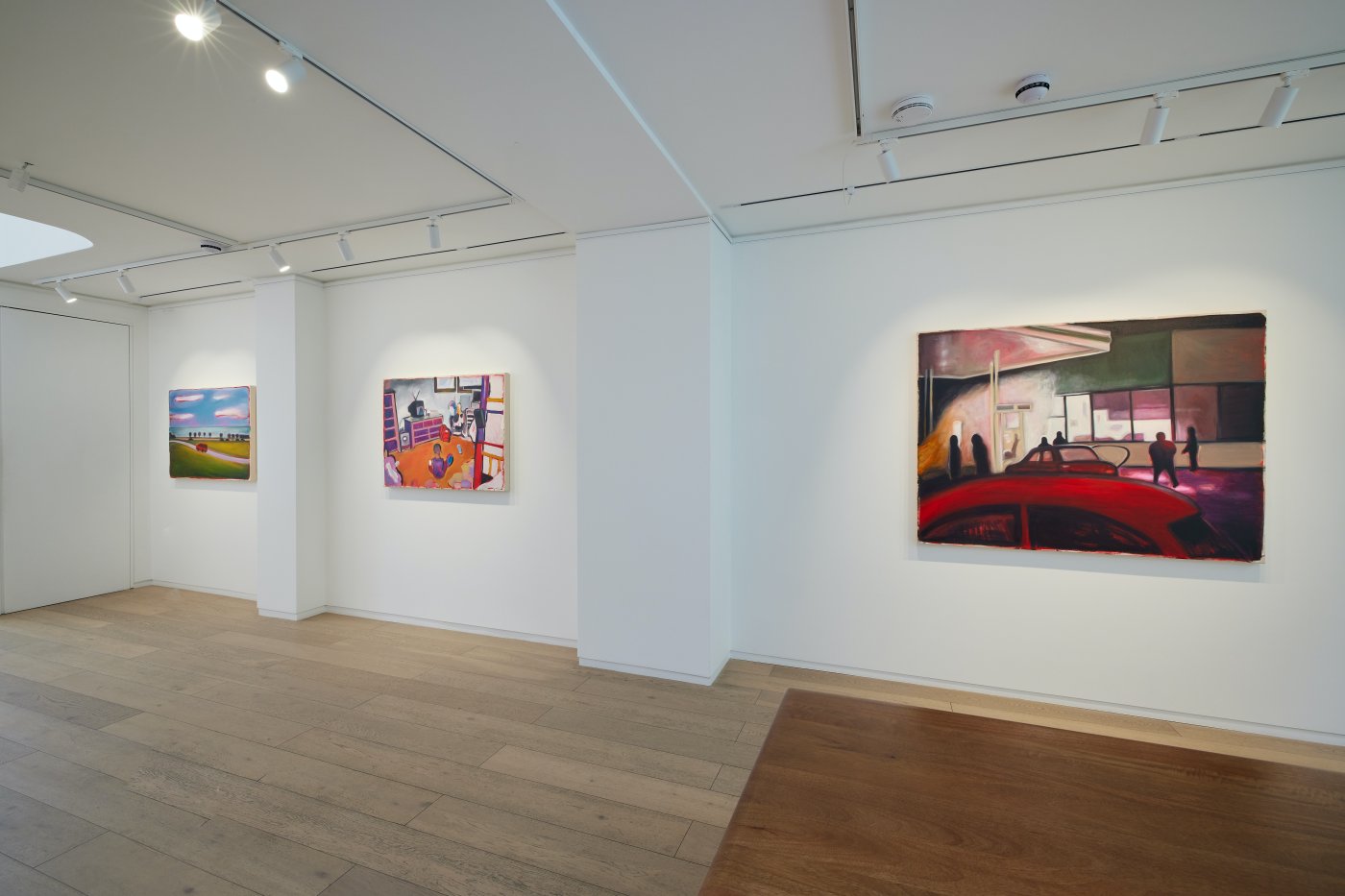 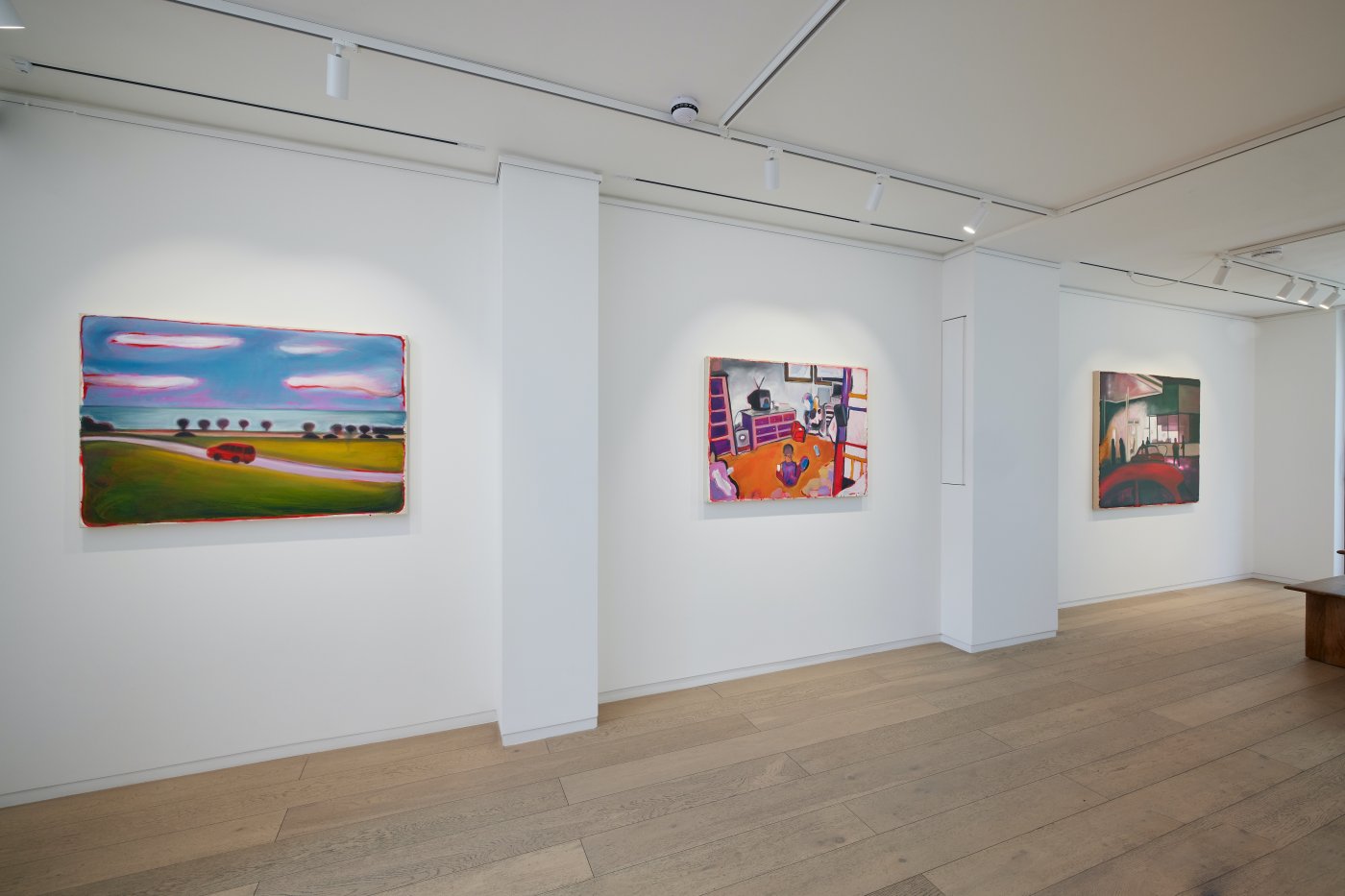 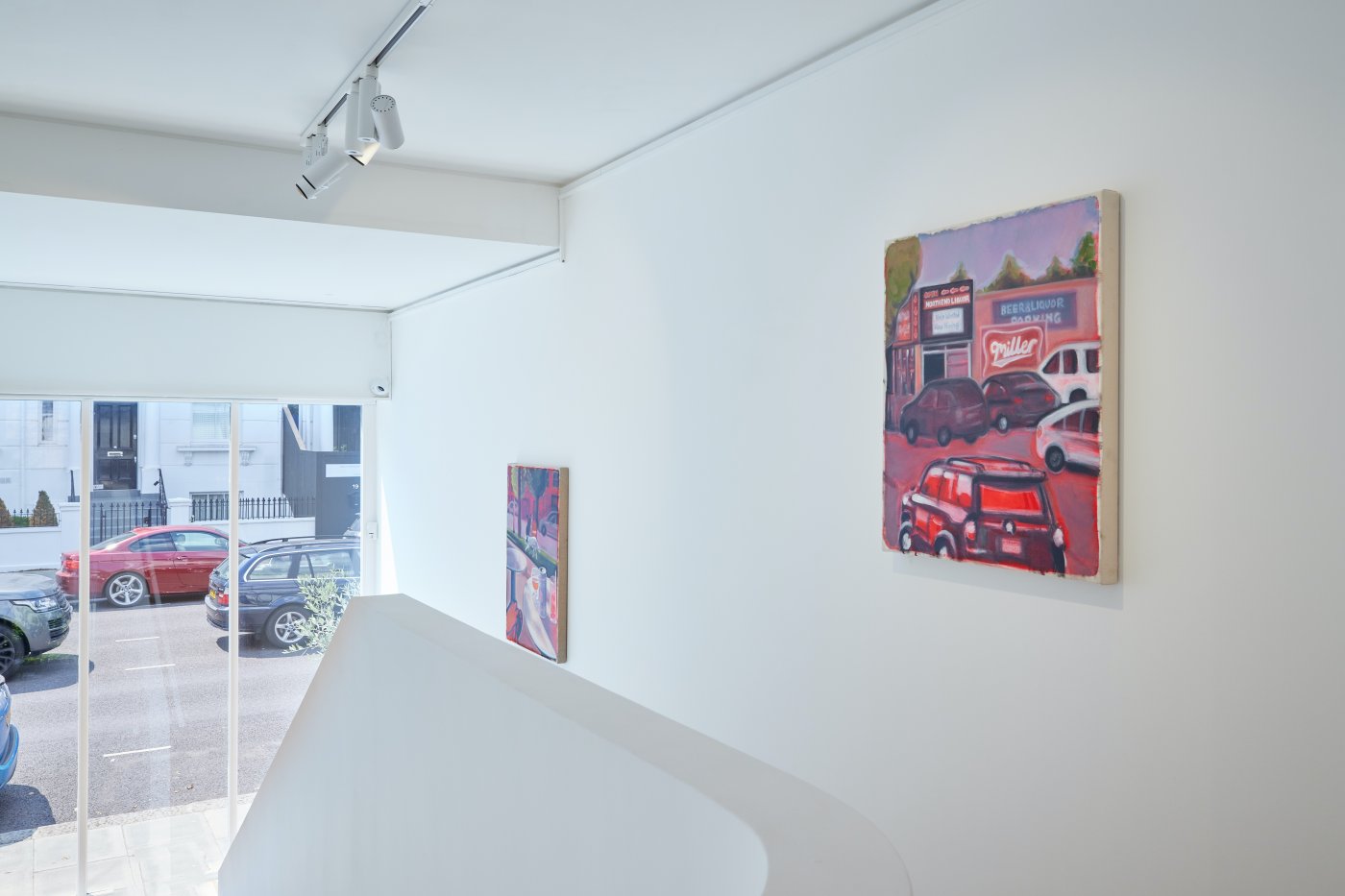 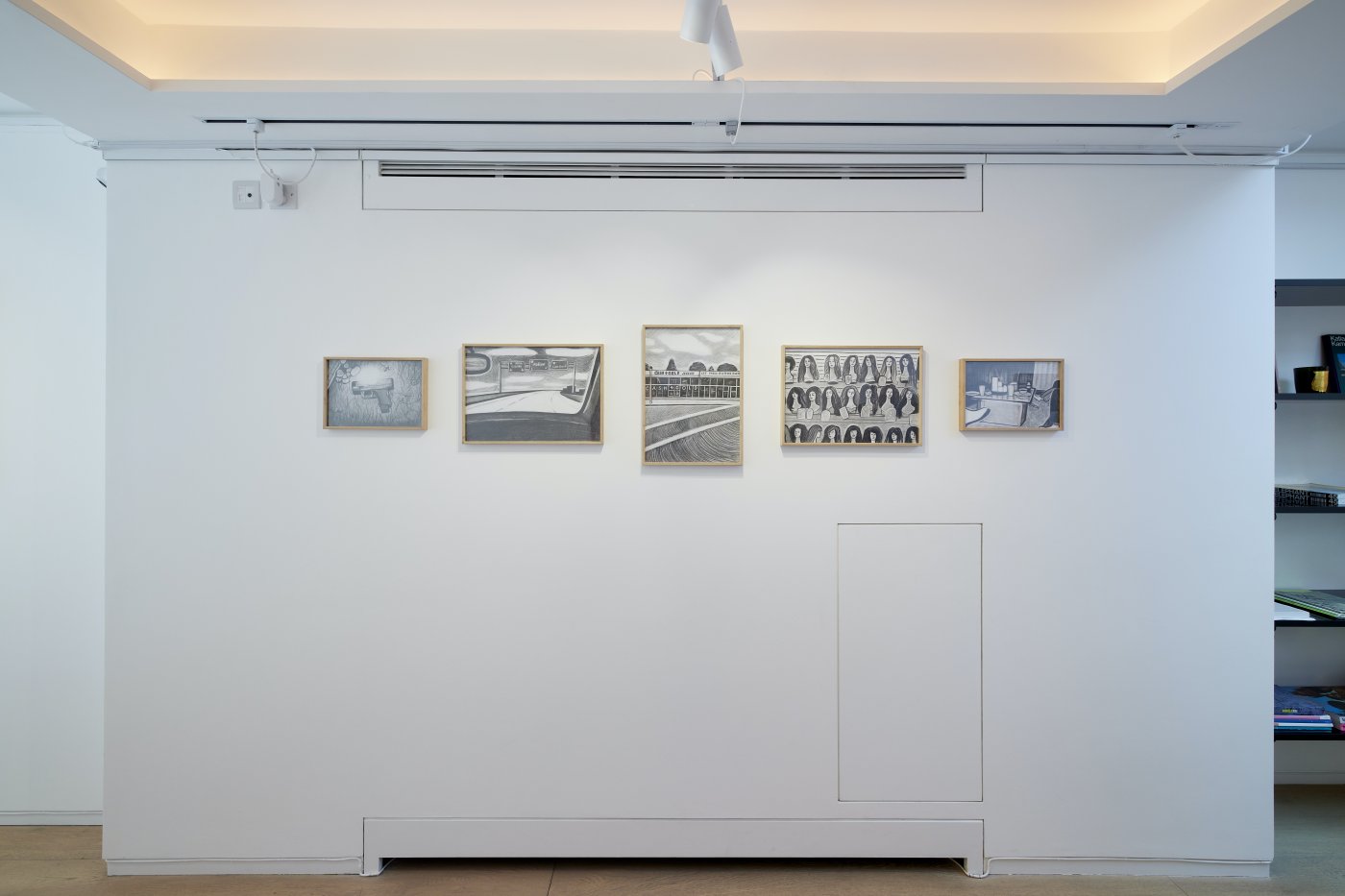 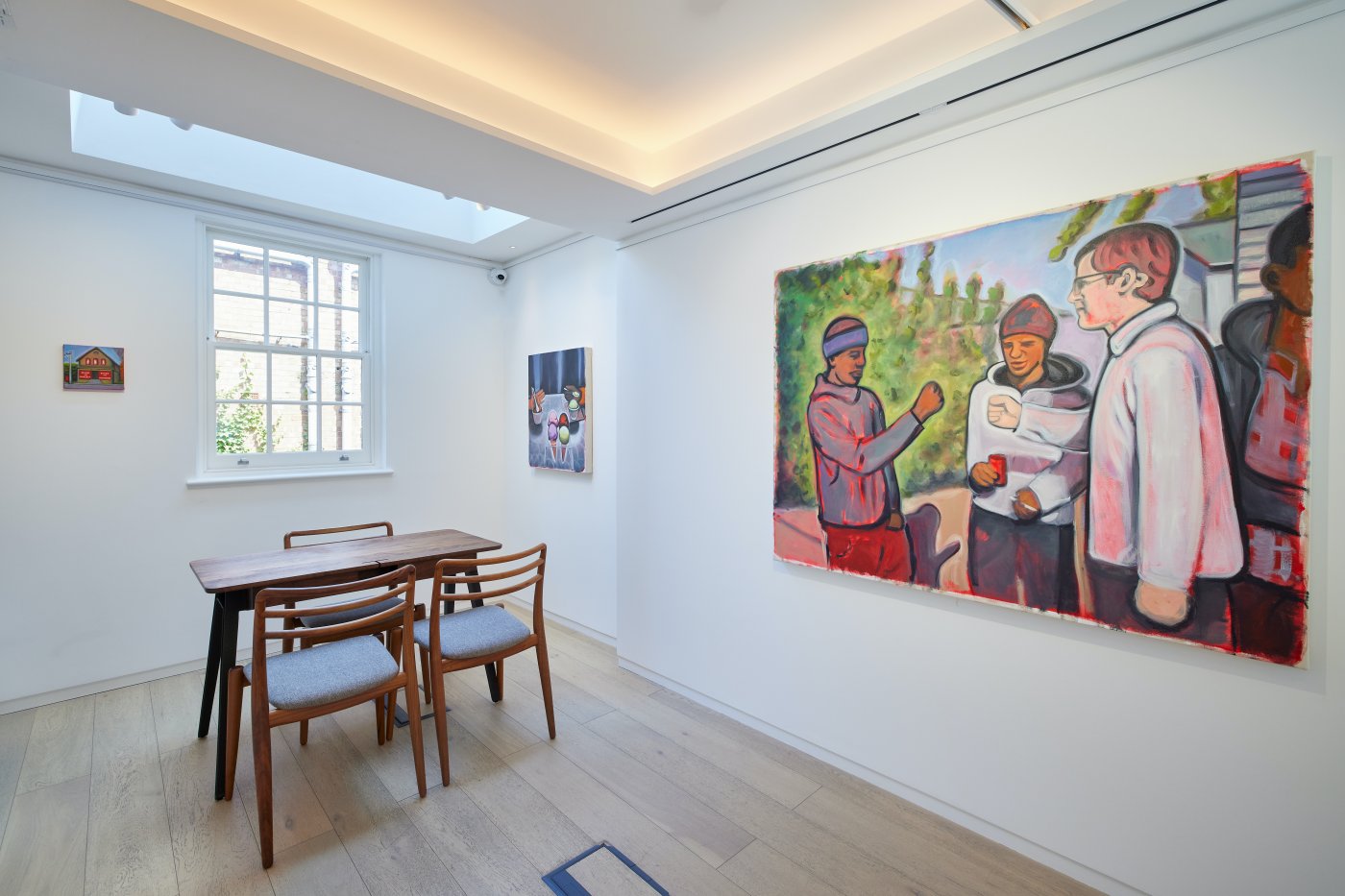 After ‘Birth of a Star’, her solo exhibition with Almine Rech in Paris that explored literal and figurative stardom within Black life and visuality, Madelynn Green’s new show pivots from the celestial realm to something closer to home. Through her trans-Atlantic lens, ‘Heartland’ spotlights the peculiarities of the artist’s hometown of Milwaukee, USA. Located two hours north of Chicago, Milwaukee is a mid-sized city known for its beer, festivals, sports, and cuisine. Yet beneath the city’s veneer simmers cruel legacies of poverty, segregation, and social inequality. In 2017 British documentarian Louis Theroux visited Milwaukee to examine the city’s murder crisis. The programme revealed systemic dysfunction’s propensity to forge personal tragedies. Upon moving to London in 2017 Madelynn was surprised to discover that many people she encountered had solely learned about her hometown through Theroux’s bloody lens.

The Milwaukee in Theroux’s documentary represented just a portion of the city; its most violent district. The artist’s experience with seeing her hometown filtered through a sensational documentary and from across an ocean allows her, in ‘Heartland’, to reexamine Milwaukee using a context both personal and political; an approach both tender and scrutinous.

As a body of work ‘Heartland’ consists of smaller scale paintings that consider the “heartland” as a geographical, thematic, and material concept. Madelynn experiments with landscape painting and revisits subjects explored in her prior works, like domesticity and portraiture. Milwaukee is located in the Midwest; America’s “Heartland.” Milwaukee, as a hometown, is in literal possession of the artist’s heart. It is a space imbued with fondness and nostalgia; with simplicity and complexity. Situated on Lake Michigan, Milwaukee boasts sublime natural landscapes that the artist has rendered alongside the city’s urban infrastructure. Along with vivid greenery and the expanse of Lake Michigan, the artist depicts the industrial haze of a liquor store, the social rituals of food, the intimacy of home, and one of the city’s ubiquitous beauty supply store -an emblem of Black-Americans’ historical tendency to self fashion.

Madelynn unites the diverse works in this exhibition with another allusion to the “heartland”; the paintings are underpainted with striking shades of red. Red underpainting is unusual, particularly for the artist. By using red as the foundation for these works she again gestures toward the “heartland”-red being the visual representation of love and of blood. The red is also a gesture toward Milwaukee’s literal history of redlining; the practice of racial housing discrimination that emerged in the 1930s and only formally ended with the Fair Housing Act of 1968. Redlining systematized the exclusion of Black people from certain neighborhoods in the city. The effects of Milwaukee’s redlining linger today. A 2015 NPR article named Milwaukee the most segregated city in America. The city remains highly segregated. A single street often divides entire neighborhoods between stark lines of White and Black; rich and poor. The lingering ghosts of Milwaukee’s red lines define the lives of many presentday Milwaukeeans and deeply colored the artist’s experience growing up in the city. The red lines of Milwaukee established the framework of the city’s present-day disparities and set the groundwork for the artist’s paintings, which illustrate the often blurred lines between the personal and political.

The works in ‘Heartland’ are sourced from Madelynn’s video and photographic images. A portion of the images hail from the artist’s personal archive, sustaining her devotion to cataloguing the visual, cultural, historical, and social narratives of Black-American life. Additional images are sourced from public archives, news reels, and film. The artist redefines these images through the language of painting, merging them with her memory to engender a distinct visuo-spatial vernacular.

Just as the political bleeds into the personal and just as her formative hometown experiences color her life in the U.K. today-the red foundations of Madelynn’s paintings profoundly interact with the colors placed on top. No matter what color is imposed on the underpainting its red still seeps through the final painting; much like how individuals must inevitably contend with their foundational histories. The red, both in literal and figurative senses, is not simply an afterthought but an integral component of the painting-of the personal and the political. Milwaukee is not merely a place of origin, but a complex liminal space of intersecting histories, landscapes, and realities. Despite the prominence of memory, archival reimagining, and recurring red tint, Madelynn is not looking at her heartland through rose colored glasses. The paintings’ raw edges break the illusion of perfection; literalizing the concept of being “rough around the edges.” The works’ intentional distortions break the illusion of fa ade and unveil the paintings’ mechanics-much like how her visual presentation of Milwaukee beyond stereotypes complicates the city’s preferred narrative.

Green’s imprecise treatment of the paintings allows visual abstraction, thus capturing the discordance between observing a space and experiencing it firsthand-between living in Milwaukee and examining it critically. The roughness also reflects her feelings of disillusionment toward Milwaukee-a city that boasts gorgeous lake views, yet where 33% of its Black residents live in poverty. Madelynn’s seemingly blase approach to rendering paint eschews total tenderness or nostalgia for home. It instead illustrates the inherent paradox of having to call a place tattooed with red lines her heartland. In East Side, phantoms of red haunt a seemingly mundane round of drinks. In Bronzeville, a replication of a famed mural in the city’s historic Bronzeville district, cheerful symbols of Black art juxtapose a background of decay. And in the lush reds of Heartache, Madelynn captures one of the city’s many liquor stores in a style both gritty and ethereal; both eccentric and sinister. Even at home, history lingers. Even into fond memories, sober realities trickle.

Reflecting on her hometown of Milwaukee from her new home, London, has allowed Madelynn Green to render Milwaukee-its memories, its geography, its sweetness, its sadness-with enhanced objectivity and empathy. Madelynn Green’s candid lens into the complicated city that birthed her-the land of her heart, the fertile seed of her art practice- traces the artist’s trajectory down a pathway of remembrance all at once brutal and tender. By fusing personal recollection with archival assistance she has refashioned the city and forged a striking material language at the ripe intersection of past and present; of personal and collective; of history and possibility.

Madelynn Green (b. 1993 in Milwaukee, USA) lives and works in London. Referencing the visual language of film photography, with its distinctive haze and ambiguity, Green’s paintings function as the physical embodiments of underrepresented histories and visually engender social and political concepts. Paint drips and figures are loosely rendered to foreground the strength of the medium as a tool for radical image-making, distinct from the objective camera lens. This imaginative balance between abstraction and representation generates new associations. In speaking about her practice, Green often notes how her experiences growing up in the American midwest and south shape her subjective and material interests, which, despite manifesting in paint, are rooted in photography.

Green’s background in politics guides her paintings and is subtly manifested in her proliferation of counter-hegemonic images. Making paintings in focused series, she addresses a range of subjects, synthesizing varied ideas and experiences. Working from photo and video reference material as well as imagination, recent subjects have included family and social dynamics.

Madelynn Green completed a bachelors in political science and Africana studies at University of Notre Dame (BSC, 2015) and received her masters from Central Saint Martins (MFA, 2019). Green’s work is held in private collections globally and has been acquired by the UK Government Art Collection and the X Museum.