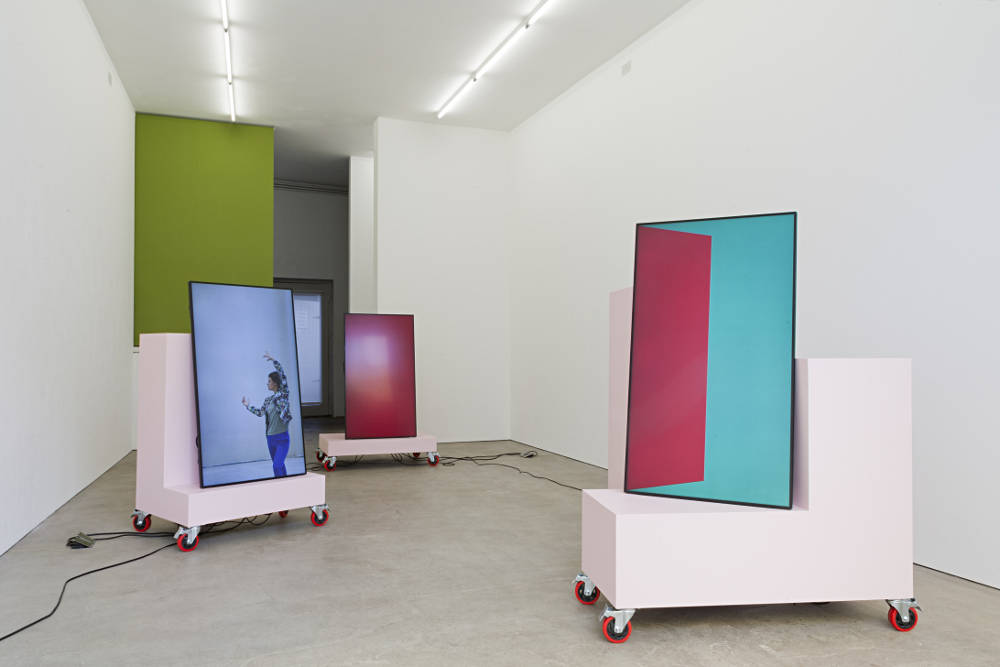 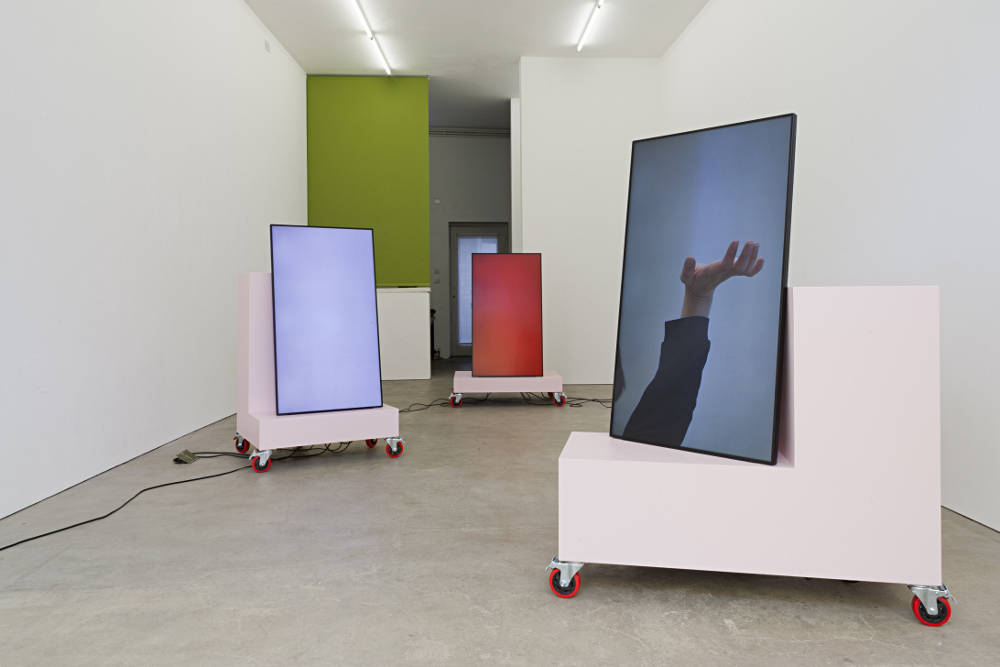 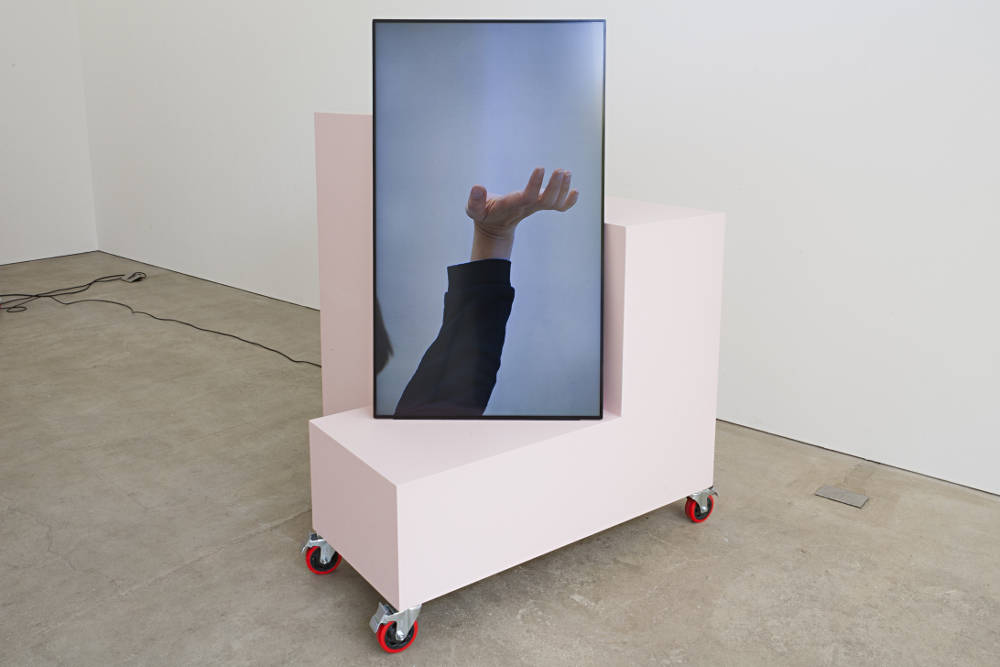 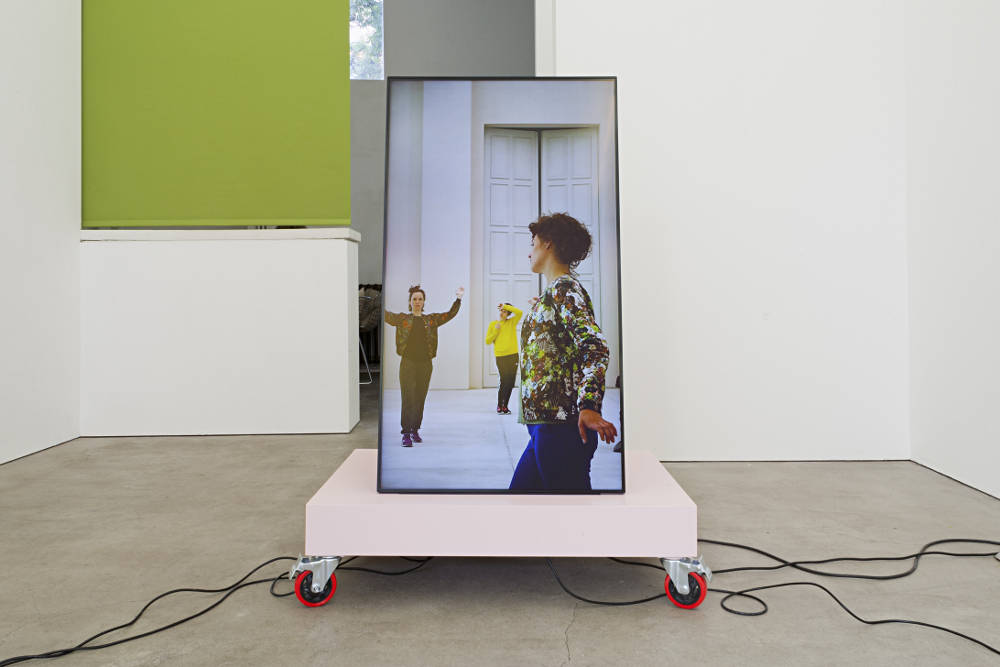 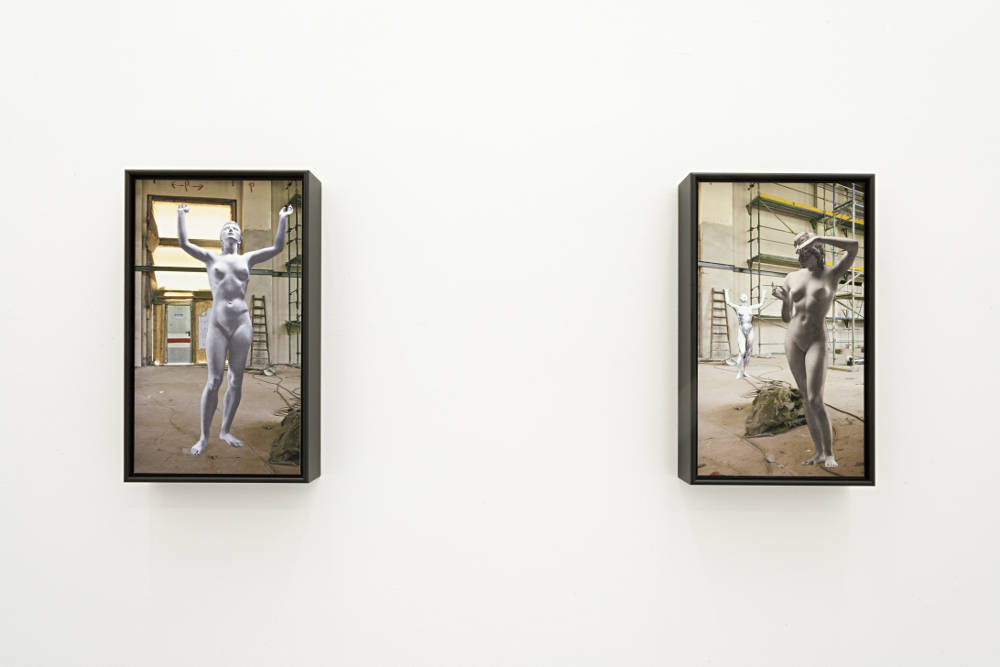 Taking Positions began with an invitation for Marsh to film in the space of Kunsthaus Dahlem, Berlin, formerly the atelier of Arno Breker—an official state sculptor of the Third Reich. As with Marsh’s previous works such as Stadium, she engages with specific sites and architectures that bear a conflation of historical, social, and political forces.

In the lead-up to Kunsthaus Dahlem’s inauguration as a new exhibition venue, Lynne Marsh worked with six female performers, filming them in the space as they embodied the postures of six of Breker’s sculptures. She chose works representing idealised femininity through such mythological figures as Eos, Psyche and Humility.

These short films form the basis of Taking Positions; Marsh presents them at Tintype on specially designed plinths, embedding moving image in a sculptural mise-en-scène. The work activates a tension between the live and the fixed, present and past, the female body as sculpture and human bodies in the here and now. Marsh questions whether a gesture or a posture can hold an ideology and to what extent it may be re-performed, possessed or repurposed.

Before filming, she studied photographs from an exhibition at the Henry Moore Institute in 2001, entitled Taking Positions, Figurative Sculpture and the Third Reich. The show offered a re-evaluation of work from the eponymous era, covering a range of sculptors whose careers flourished during the Third Reich as well as those who effectively made their work in isolation. Marsh is interested in how art becomes subject to the way in which it is received in different periods or regimes. In an attempt to gain some distance from history’s traumas, traditional figurative sculpture was progressively supplanted by abstraction, the latter hailed as an expression of Western democratic values; one aesthetic regime displaced by another.

“When making this work, I looked to Joseph Albers’ influential book Interaction of Color (1963) as a counter position to the issues figuration raised. Working with a system of forms and colours, he saw the art work as freed from external circumstances. Through practical exercises, he exposed the relativity and instability of colour. In order to decide on my cast of colours, I borrow from contemporary artist Stephen Prina by using Pantone colours—nowadays also a regime of sorts—of the years 2000 to 2018” Marsh states. Considering differing colour arrangements as performances in their own right, Marsh further develops this element of theatricality at Tintype with coloured filters installed on the gallery windows.

Staging an interplay between diverse characteristics from classicism, modernity and abstraction, Marsh’s new work formulates relationships between systems of visual thinking, regimes of representation, and performance as a form of activation.

LYNNE MARSH is a Canadian artist, currently living and working in Los Angeles. She received her BFA at Concordia University in Montreal and her MA at Goldsmiths, University of London. From 2001 – 2016 she lived and worked in both London and Berlin.
Solo exhibitions of her work have been presented by Berlinische Galerie, Berlin (2017); Opera North, Leeds (2016); fig-2 at ICA, London (2015); Scrap Metal, in association with theToronto International
Film Festival (2014); and Musée d’art contemporain de Montréal (2008). Her work has also been featured at La Biennale de Montréal (2014); The National Gallery of Canada, Ottawa (2012); 53 Art Museum, Guangzhou (2011); Manif d’art–The Québec City Biennial (2010); and the 10th International Istanbul Biennial (2007).

Courtesy of the artist and Tintype, London