Impossible Weather, Luke Burton’s third solo show at Bosse & Baum, brings together new paintings and vitreous enamels that examine the role scale plays in the psychic space of image-making and our own environments. 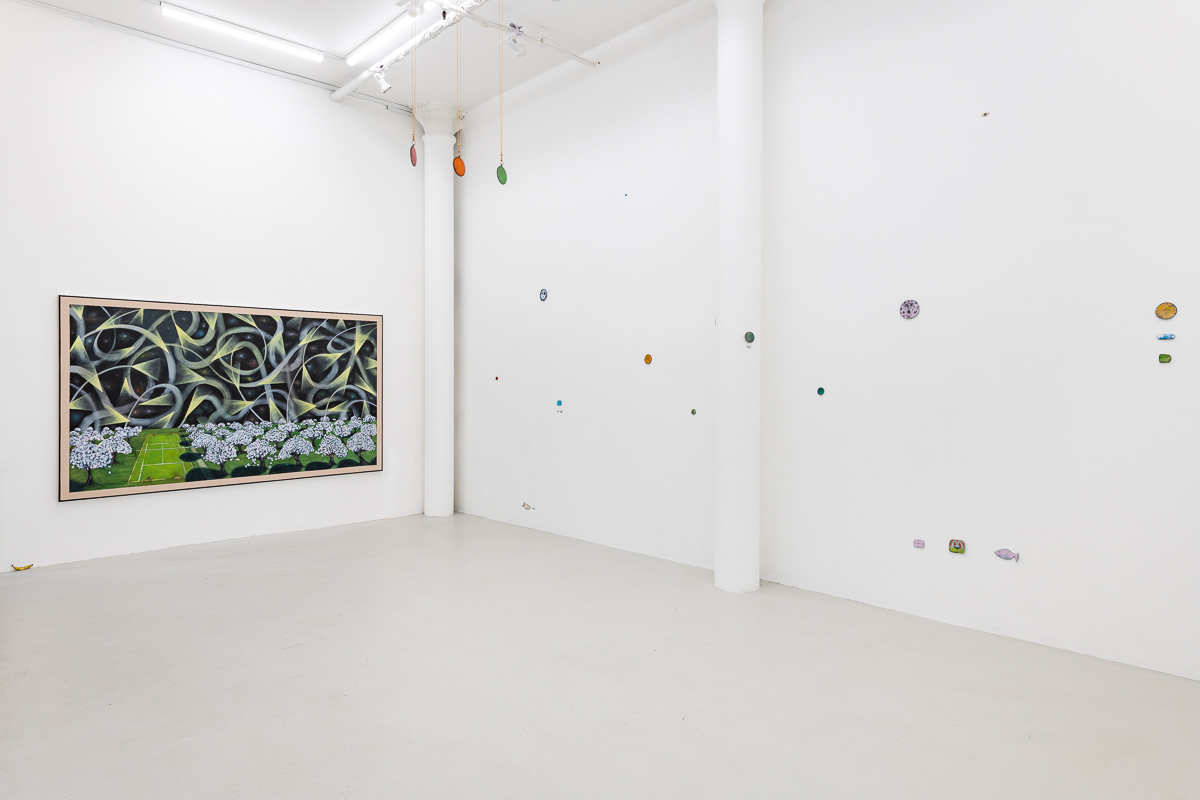 The exhibition consists of two complimentary but materially contrasting bodies of work: one large landscape painting depicting a particular view of Girton College, Cambridgeshire, where Burton has recently held a year-long residency. The other, a group of enamel miniatures shown reflecting and refracting, literally and figuratively, the formal and symbolic space of the painting. Girton is situated between two large motorways, which can be perpetually heard as a low atmospheric hum against the relative isolation and verdant gardens that surround the college’s buildings. Burton understands this ambient sound as inherently environmental and decorative, infusing his representation of the superhighway with a cosmic, musical atmosphere, collapsing vast spatial distances and sounds into a single frame of a painting on canvas. It is depicted as something magical and celebratory, formally ordered and yet also elemental, sprawling, toxic and chaotic. Below the horizon line is a grass tennis court that is seemingly abandoned from play and an apple orchard in full bloom, also suggestive of different ideas of excess and emptiness; connectivity and isolation. In a time when physical movement is so restricted, the roads express dynamism, swirls of interlacing expressionistic brush marks, an index of the hands’ movement and touch. In contrast, the tiny cars seem toy-like and static. We see headlights signalling to each other as a binary, on/off interaction, suggesting the digital platforms on which we are now so dependent – stationary, mundane, yet oddly magical light boxes for communication.

Surrounding the large painting is a series of small vitreous enamel works. These hand painted objects, informed by a recent residency in Athens during which Burton encountered the historical medium of Ex-Voto objects, are made using an ancient technique whereby powdered glass is fired at high temperatures in a kiln onto copper substrates. Their arrangement in the gallery space also reflects the cosmological arrangement of the superhighways and stars found in the painting. Displayed in groups: pairs, triads and singularly, they suggest both an open system of interpretation but also one that allows for specific connections between individual works. Personified moons, traffic light pendants, abstract cosmic discs, blood-shot eyes, ‘Anxiety Colour Wheels’ and discrete portraits punctuate the space. Too small to see from a distance, they become abstracted, bejewelling the walls, accumulatively giving the space an ornamental atmosphere. The position of the enamels suggest that the work’s function, context or ‘frame’ is ambiguous – both on and beyond the gallery wall. The exhibition reflects a moment when worlds are alternately expanding and contracting exponentially- the bigger the crowd on conference calls, the smaller the faces – a collapsing of time, distance and space. It is a vision of a dream-like reality nearly devoid of people in the landscape, only appearing in the enamel portraits occasionally, discretely and untethered from any known surroundings.