Featuring previously unseen works from Hurtado’s Sky Skin series, this exhibition centres on the artist’s pursuit of the other worldly and a broader reflection on life and death. 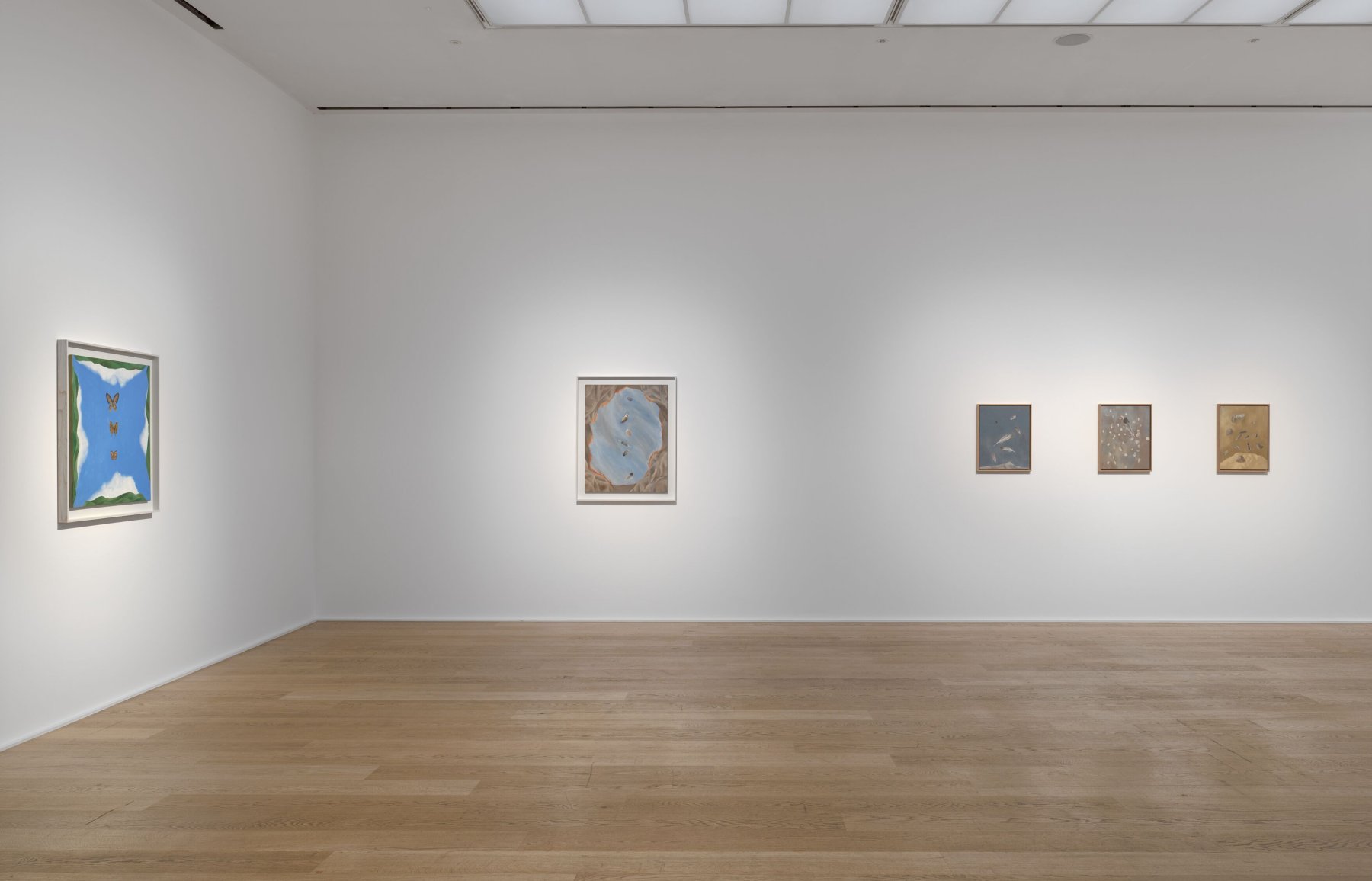 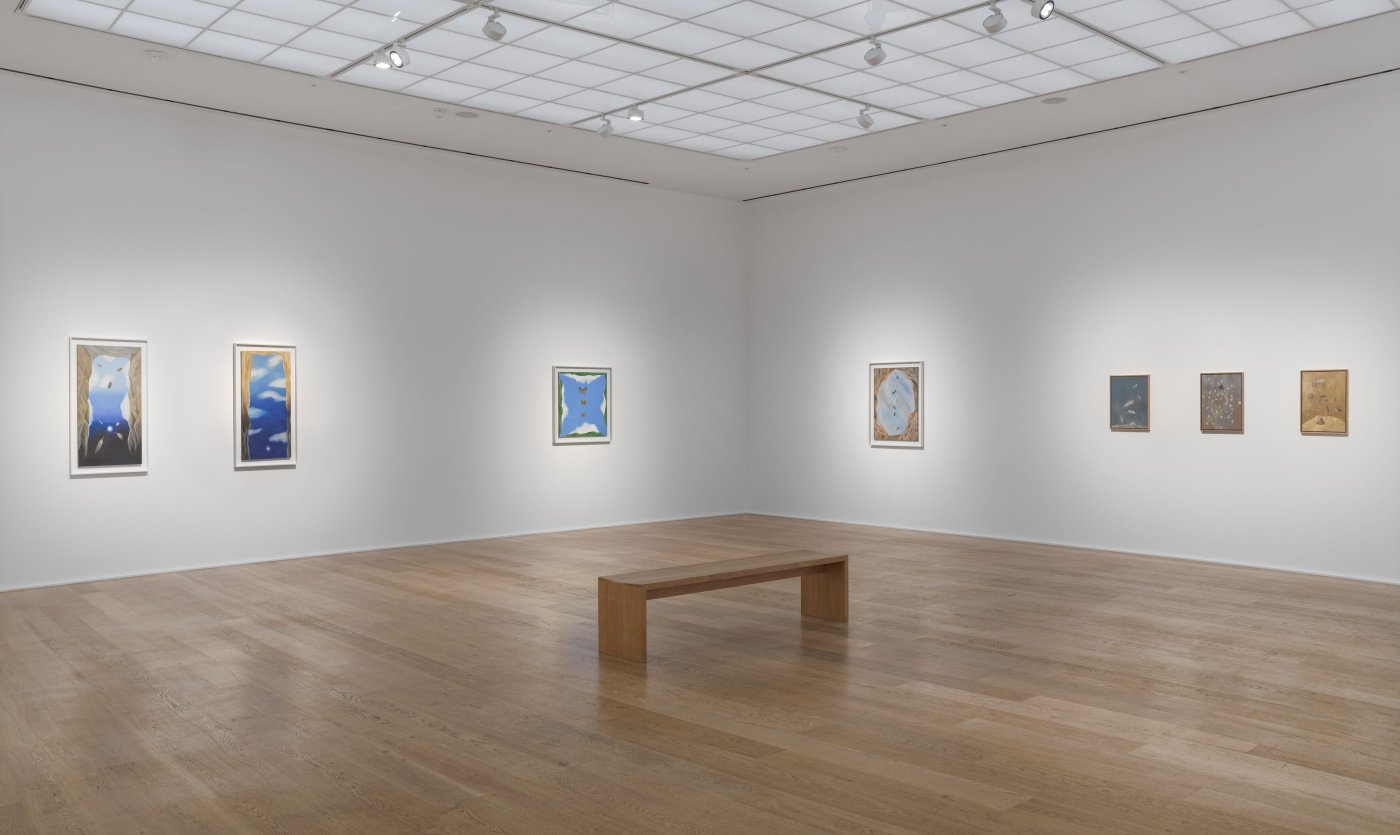 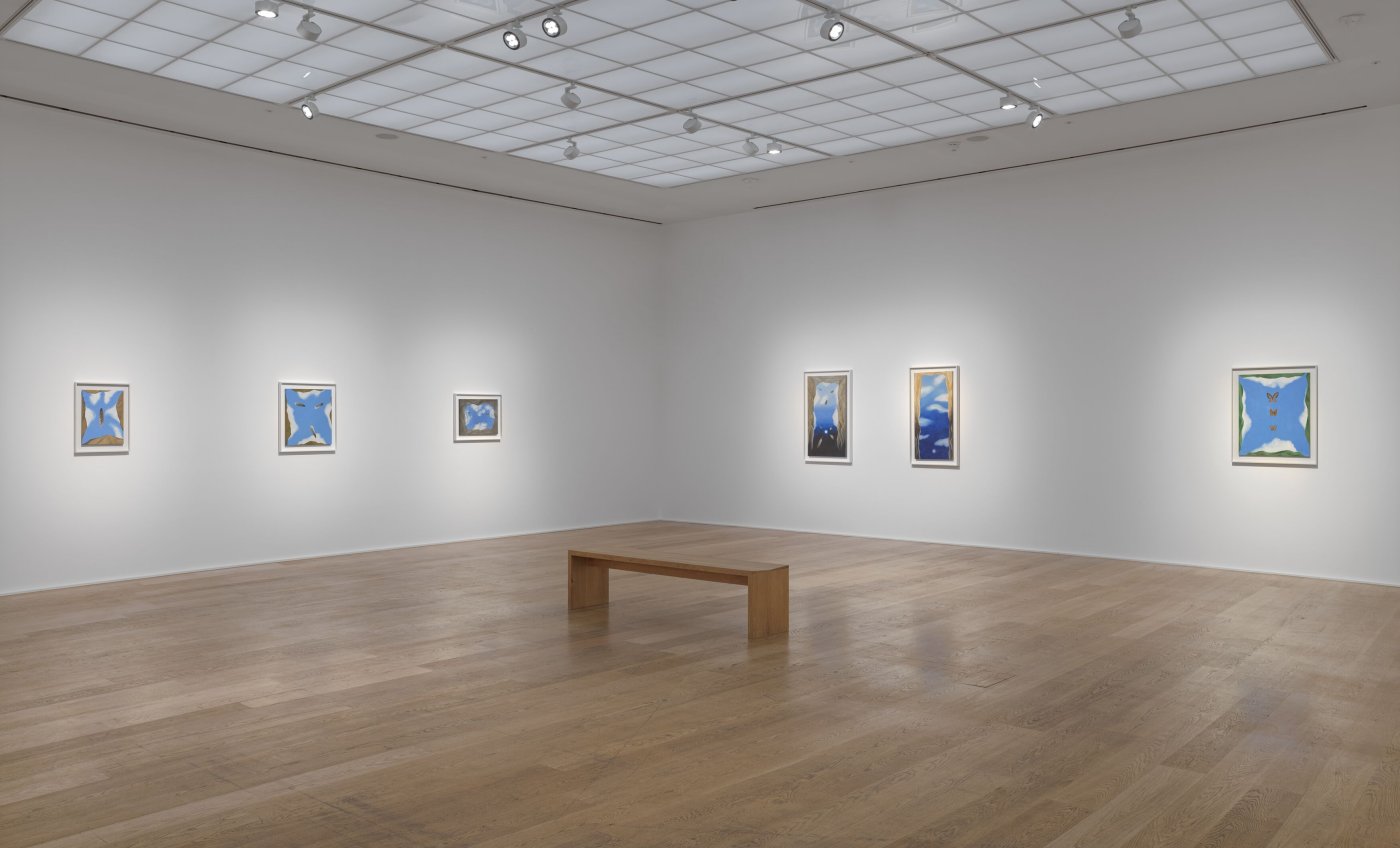 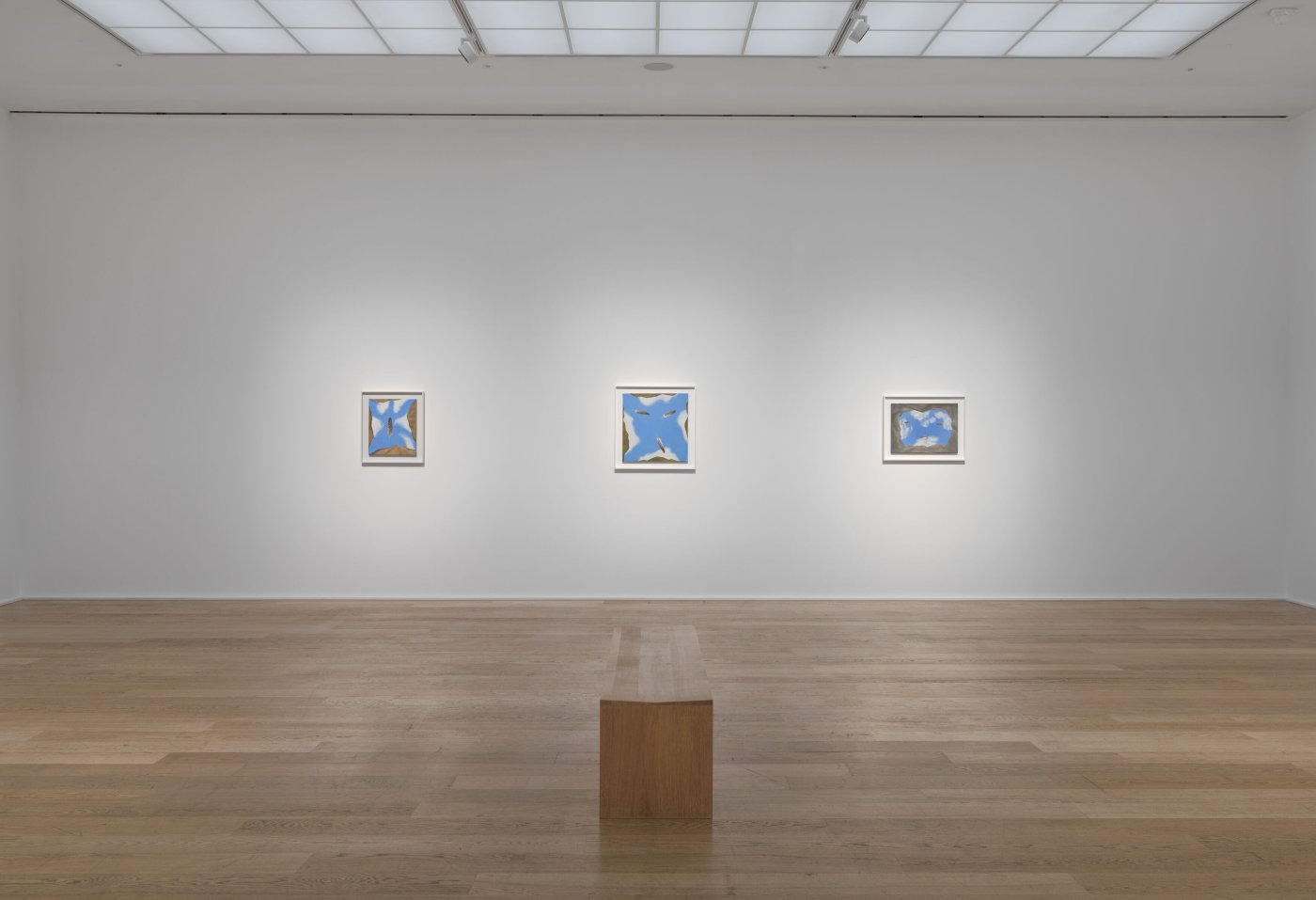 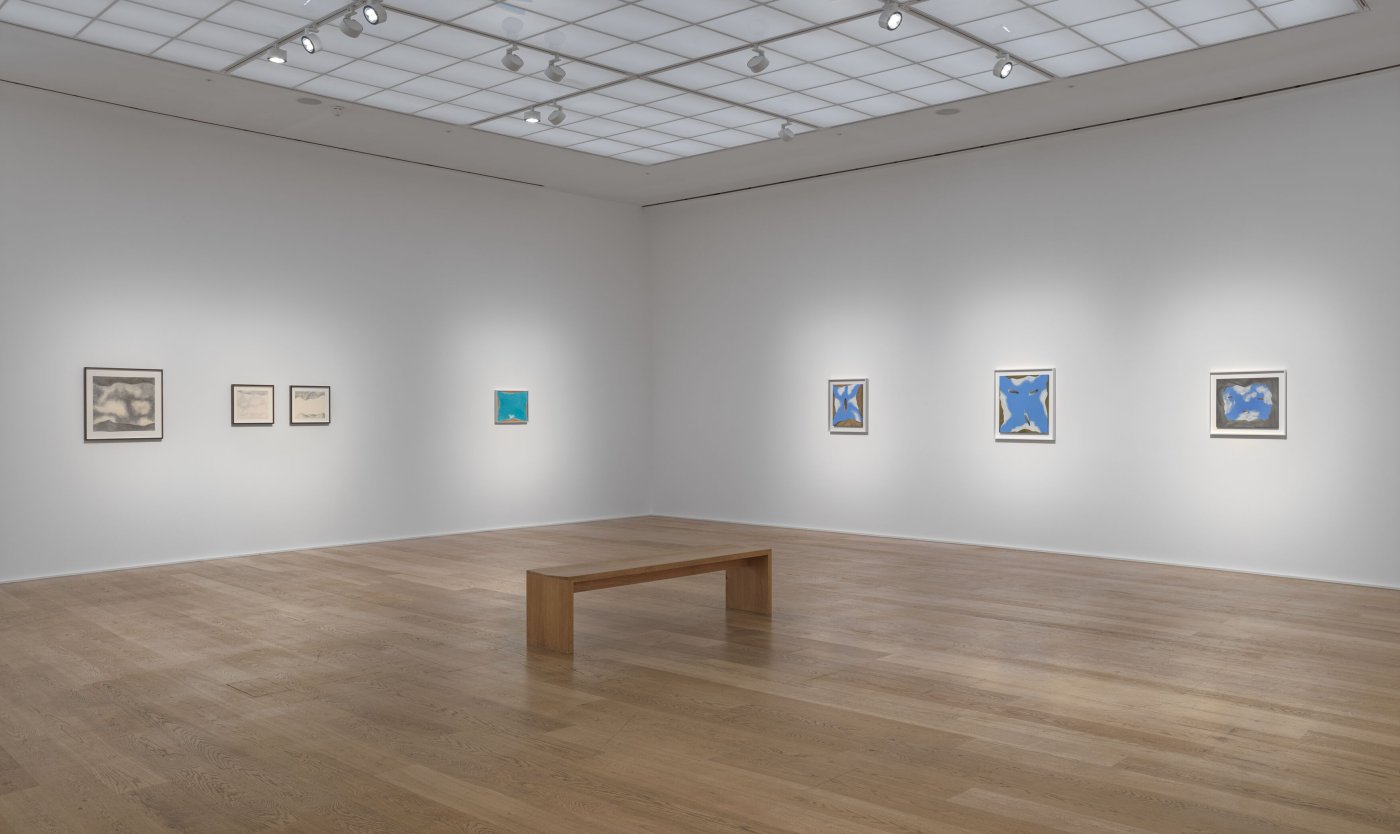 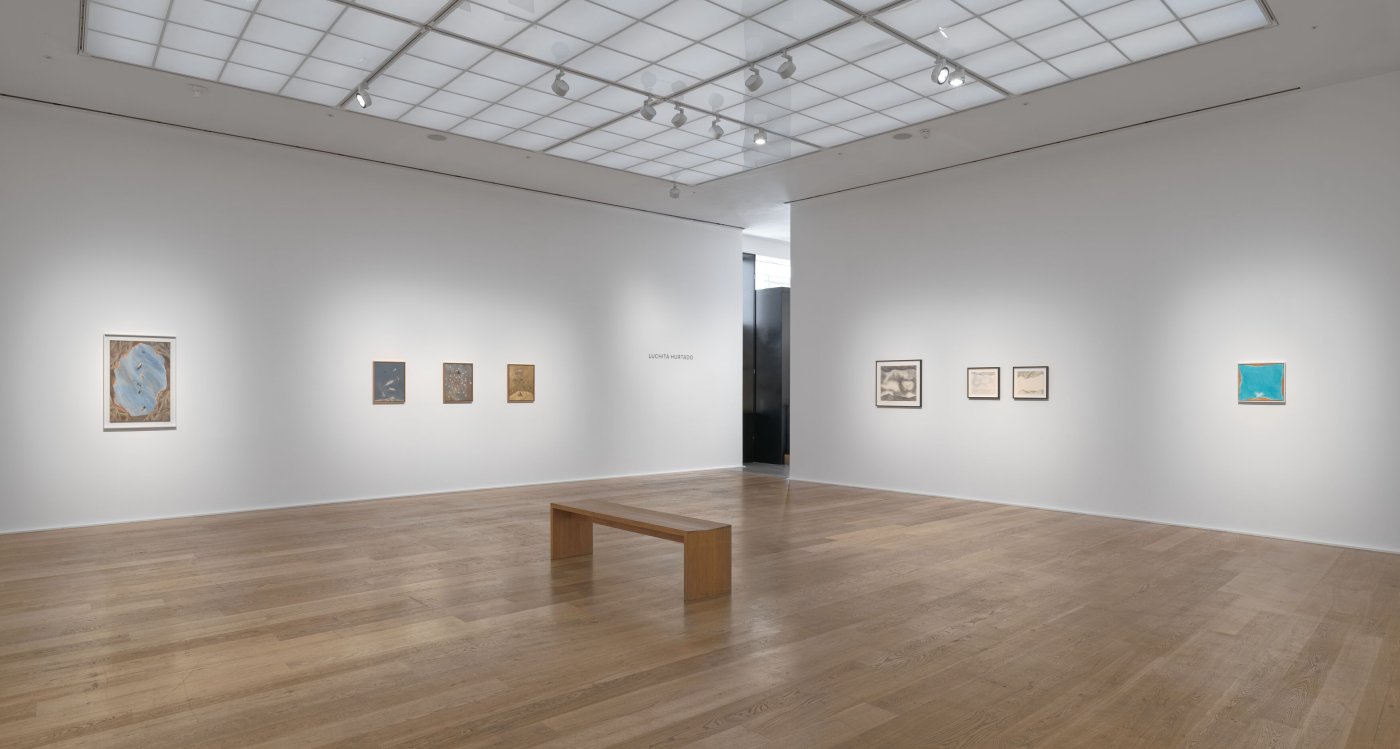 Beginning in the mid-1970s, Hurtado’s gaze turned upwards, inverting the downward-facing perspective of her earlier I Am paintings. A selection of transitional drawings merge these series, as elements of the female body, including breast, stomach and knee viewed from a down-cast angle, transform into rolling mountains in a continuation of the artist’s imaginative experimentation with figurative landscapes. In the Sky Skins, Hurtado’s skies are often encircled by craggy earth, referencing the mountains of Taos, New Mexico, where Hurtado spent her summers, as well as the hills of Santa Monica Canyon, where the artist resided the remainder of the year. Born in Maiquetía, Venezuela in 1920, Luchita Hurtado dedicated over eighty years of her extensive career to the investigation of universality and transcendence. Developing her artistic vocabulary through a coalescence of abstraction, mysticism, corporality and landscape, the breadth of her experimentation – with unconventional techniques, materials, and styles – speaks to the diverse cultural and experiential contexts that shaped her life and her art.

While Hurtado associated with a vast network of internationally renowned artists and intellectuals, including Mexican muralists, Surrealists, members of Dynaton, Feminist artists, and the Chicano/Latino art scene, nevertheless, her practice always remained an independent and largely private pursuit. Moreover, these paintings that see Hurtado looking upwards reflect her search for spiritual truths. The shift in this series, following on from her more self-reflexive I Am works, is towards an understanding of the connectivity of all beings within the world and the cosmos, including humans, animals, and nature. Striking works from this series, ‘Distant Gravity of a Day’ (1977) and ‘The Umbilical Cord of the Earth is the Moon’ (1977) epitomise Hurtado’s pursuit of the other worldly, and a wider contemplation on life and death. These works are depictions of cloud, moon and sky with jagged rock and mountain ground wrapped around the edges, demonstrating a view from inside, as if peering through a cave, passageway or grave. In others, the sky resembles the shape of stretched animal hides, giving the series its title. The ‘Sky Skin’ series was born out of reflecting on the sky in Taos, New Mexico where Luchita and her husband Lee built a house (designed by Louise Bourgeois’ son, Jean-Louis Bourgeois and Hurtado’s husband, artist Lee Mullican). The house was constructed to be based on the shape of a ‘Kachina’, a spirit being in Native American culture, which gave onto a view of the sacred mountain in Taos. To photograph them, Hurtado would install works from this series on a post with the landscape as a backdrop. The mysticism and spiritual nature of the symbols Hurtado employs in these works are deeply connected with Taos and its sky, landscape, nature, and people.

In works such as ‘Mask’ (1977), singular feathers float and hover in formation in front of distant clouds. Space is polarised to emphasise foreground proximity and the far-off distance of cloud, and sky, punctuated occasionally in the near middle ground by these airborne entities that largely serve to underscore the abstract vastness behind them. The feathers painted by Hurtado, who often collected them, reference Native American rituals, witnessed by Hurtado, where feathers were placed over bonfires and left there to float mid-air. They are grey, brown, and white, staying within the earthy palette of the landscape as depicted in her works. In a text written by Sarah Lehrer-Graiwer for Hurtado’s 2019 solo exhibition at Serpentine Galleries in London, Lehrer-Graiwer draws attention to the muted hues of these feathers as generally characterising the female of most bird species, as an image of femininity this could perhaps even be understood as a representation of Hurtado herself within the painting. The presentation also includes smaller studies: darker compositions of feathers and pebbles that are delicately strewn across seemingly more two-dimensional surfaces. The depiction of fire surrounding the edges of ‘Still Eternal Change’ (1978) point to Hurtado’s continued fascination with how to render light and fire. Hurtado’s first drawings she ever made, as a teenager, portrayed rings of fire that she recalls being fascinated by looking at old gas stoves. These works also offer a significant, though under-recognised, contribution to the language of a surrealist landscape, through the juxtaposition of familiar objects and earthly elements.

Living entities in the form of moths or butterflies also make an appearance within this series, lined up delicately and weightless within the backdrop of sky in ‘Untitled’ (c. 1970s). Hurtado remembers her first encounter with a butterfly, ‘I found my artistic language when I was a child. I had a great sense of smell, and one day I smelled a butterfly breaking out of its cocoon. I watched the whole procedure. It was like an instrument for magic’. Fusing body and environment, self, and cosmos through figure-ground transposition, the ‘Sky Skins’ show Hurtado’s passionate environmentalism and natural connectedness to the elements around her. Hurtado once said, ‘Trees are our cousins. We’re related to the tree directly because it breathes out and we breathe in. Sometimes I find myself touching trees and communicating with them, feeling that they’re feeling what I’m feeling – It gets to the point where it’s a very personal, almost churchlike thing – We need to think of all living things in this world as our relatives’.