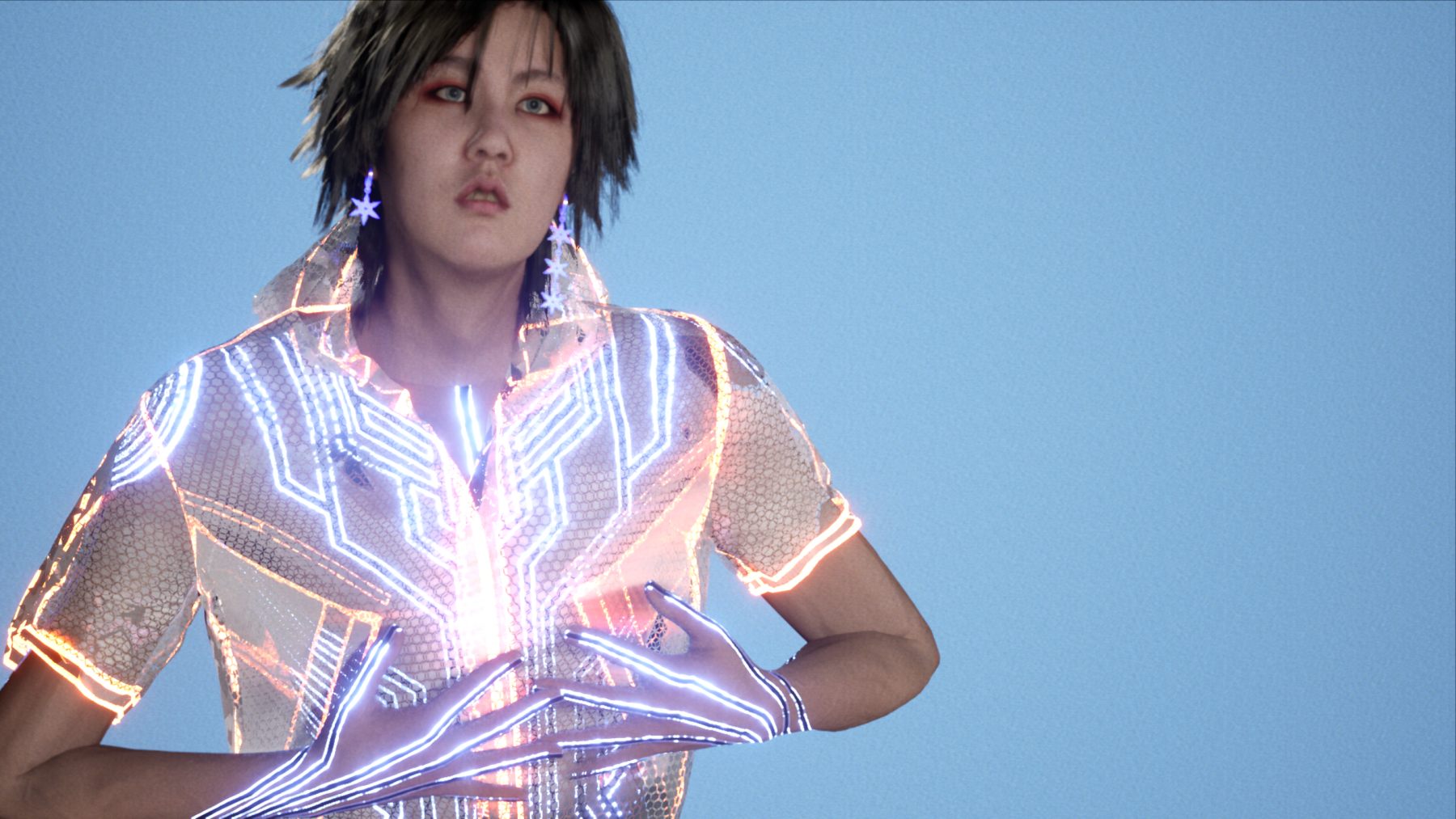 Lu Yang is at the forefront of the generation of artists from China, born in the 1980s whose lives paralleled the growth of a global economy. In Lu Yang’s world, cultures collide, the digital realm prevails, and religions must be reinterpreted. These artworks–packed with avatars, while grounded in the latest scientific inquiries—are wildly engaging and often disturbing, creating post-human life forms in a world dominated by Japanese anime and interactive video games.

Doku: Digital Alaya combines ancient Buddhist ideas about reincarnation with the latest technology of motion capture and live animation. Doku is Lu Yang’s latest nonbinary avatar named after the phrase, “Dokusho Dokushi”, meaning “We are born alone, and we die alone.” Digital Alaya, the title of this show, is a reference to ālayavijñāna, the term for a storehouse of consciousness that is the basis of all mental, spiritual, and physical development. In the course of the exhibition, Doku appears in six 3-D environments, each representing one of the six realms of rebirth in a Buddhist concept of reincarnation.

The central question is whether our lives in the digital realm—made so acutely apparent during the pandemic—have undermined or replaced ancient religious ideologies. Lu Yang bypasses meditation or more conventional means of improving karma and goes directly to the assistance of scientists and technicians to find new ways to keep the cycle of life going in cyberspace.

To create a life-like digital post-human, Lu Yang collaborates with a team of scientists, 3D animators, and digital technicians using motion capture, detailing the features of her face and facial expressions so that the avatar, Doku, looks remarkably like its creator. Body movements are also generated through the motion capture of dancers and musicians, providing Doku with a perfect androgynous body. The artist is reborn repeatedly as a nonbinary, androgynous, ever-present avatar, capable of talents beyond physical limitations. Doku appears in six different settings that Lu Yang creates herself using 3D digital techniques. The resulting work is displayed on lightboxes, videos, and installations. The video, Doku: Digital Reincarnation takes viewers behind the scenes to see a process straight out of sci-fiction, as fascinating as the final works themselves.

About Lu Yang
Born in 1986 in Shanghai where she is currently based, Lu Yang prefers to play with pronouns and insists she “lives on the internet” to further confuse fixed notions of identity. She attended the China Academy of Fine Art in Hangzhou, BFA, and MFA, under the tutelage of Zhang Peili, the godfather of Chinese video art. A 2019 winner of the BMW Art Journey award, she has shown internationally including the M Woods Museum in Beijing, the Centre Pompidou in Paris, the Australian Centre for Contemporary Art in Melbourne, and many other venues. She is currently in the Asia Society Triennial in New York.