Louise Bonnet: The Hours is viewable through the storefront windows, twenty-four hours a day

This is what my unconscious looks like.
—Louise Bonnet

Gagosian presents The Hours, an exhibition of new oil paintings by Louise Bonnet. This is her first solo exhibition with the gallery. 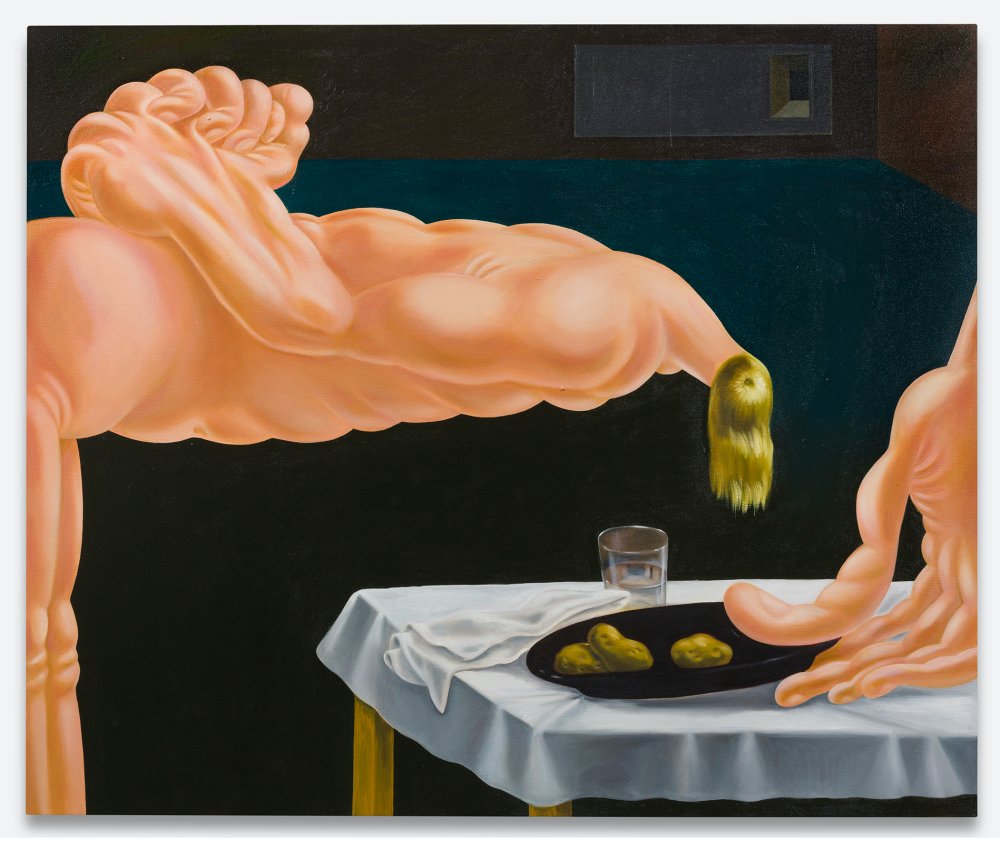 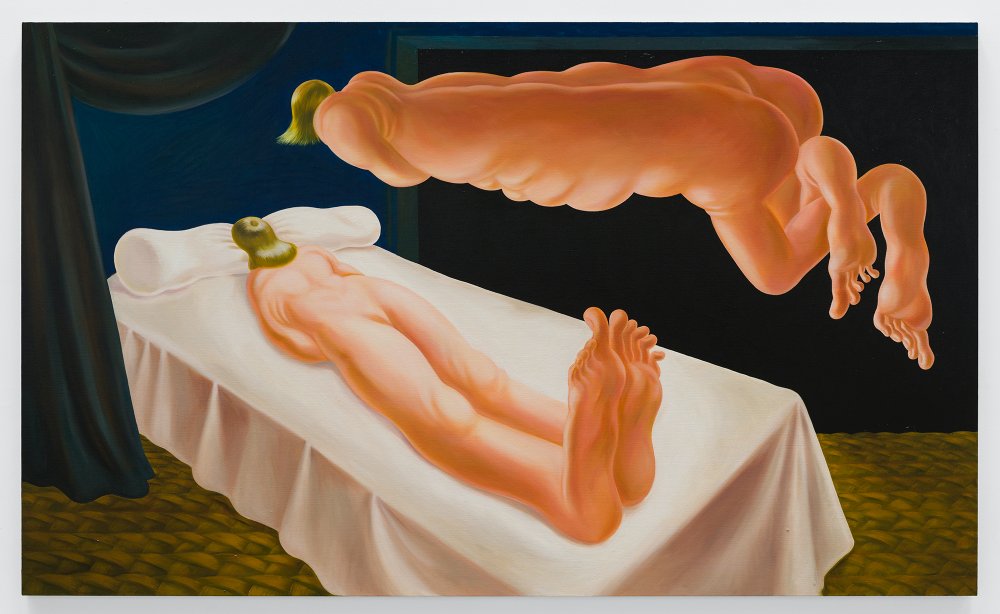 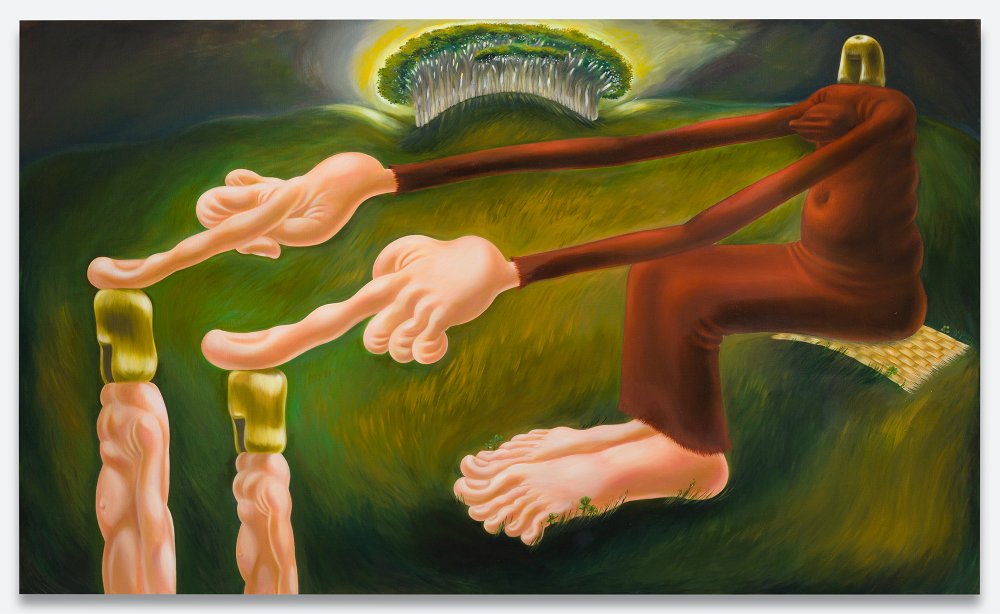 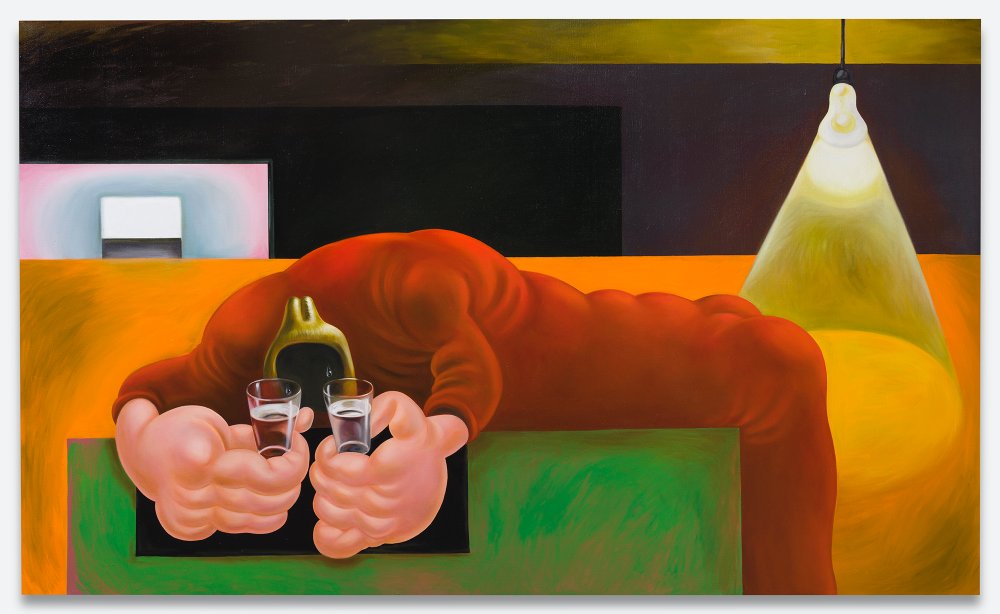 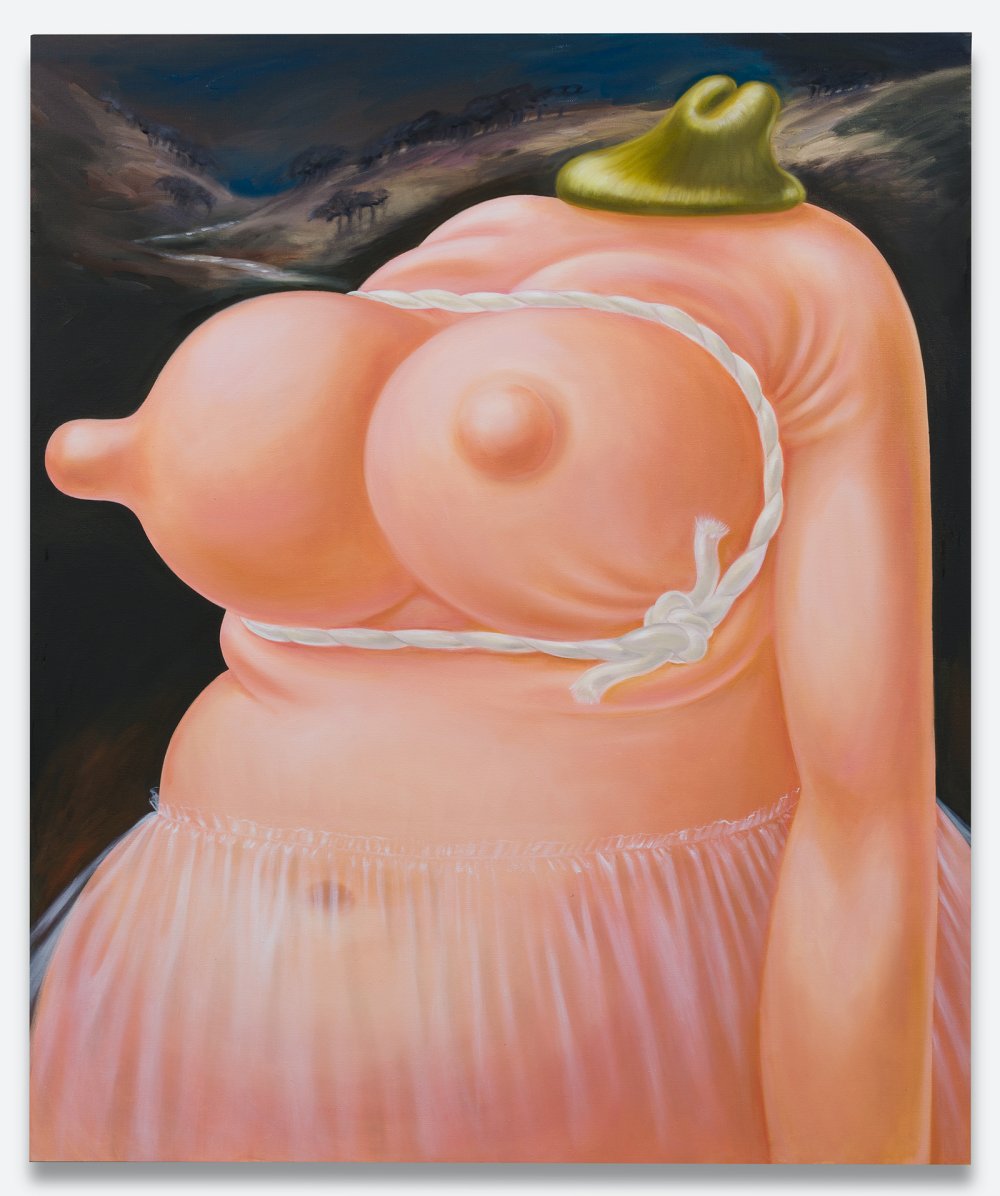 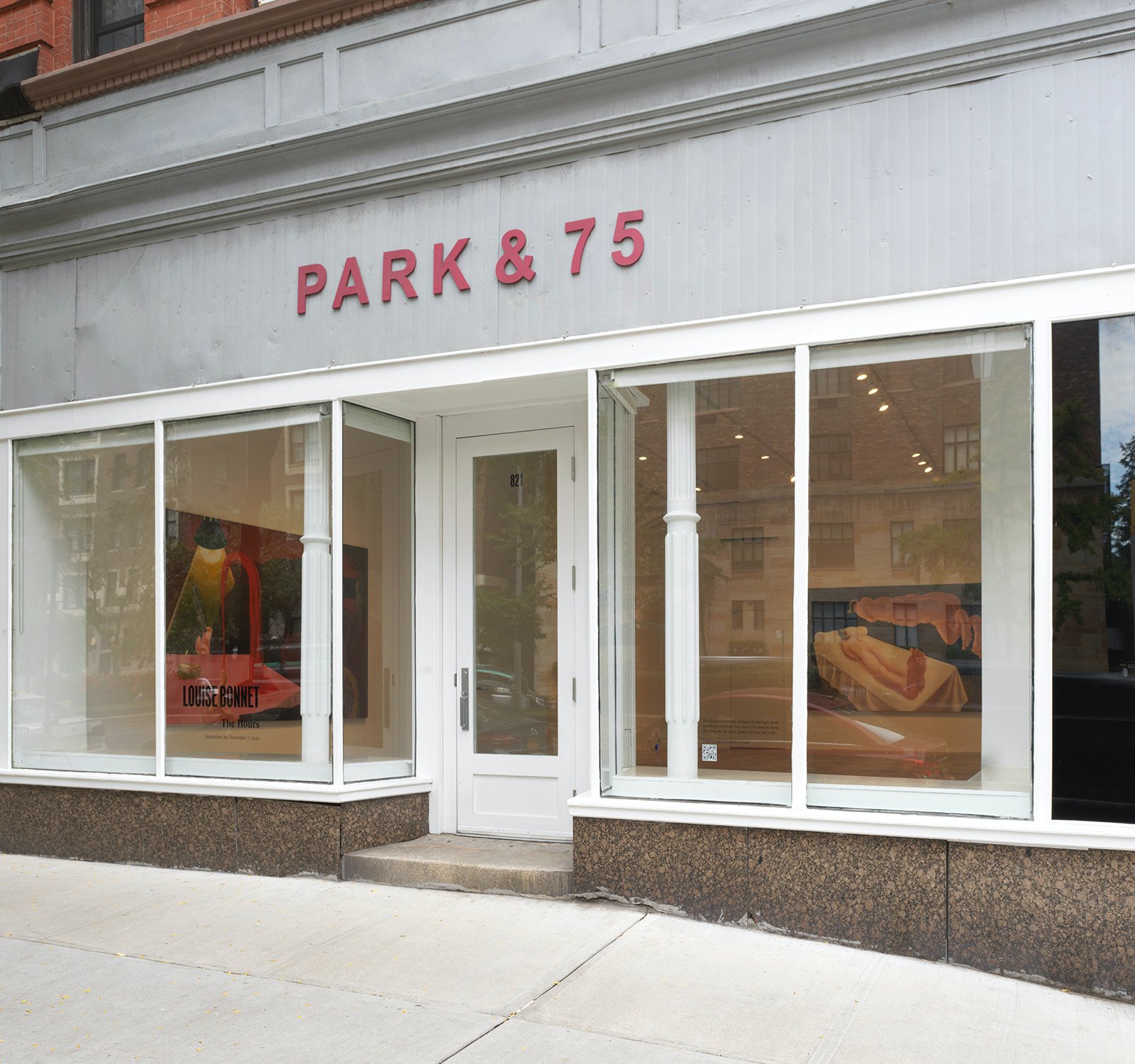 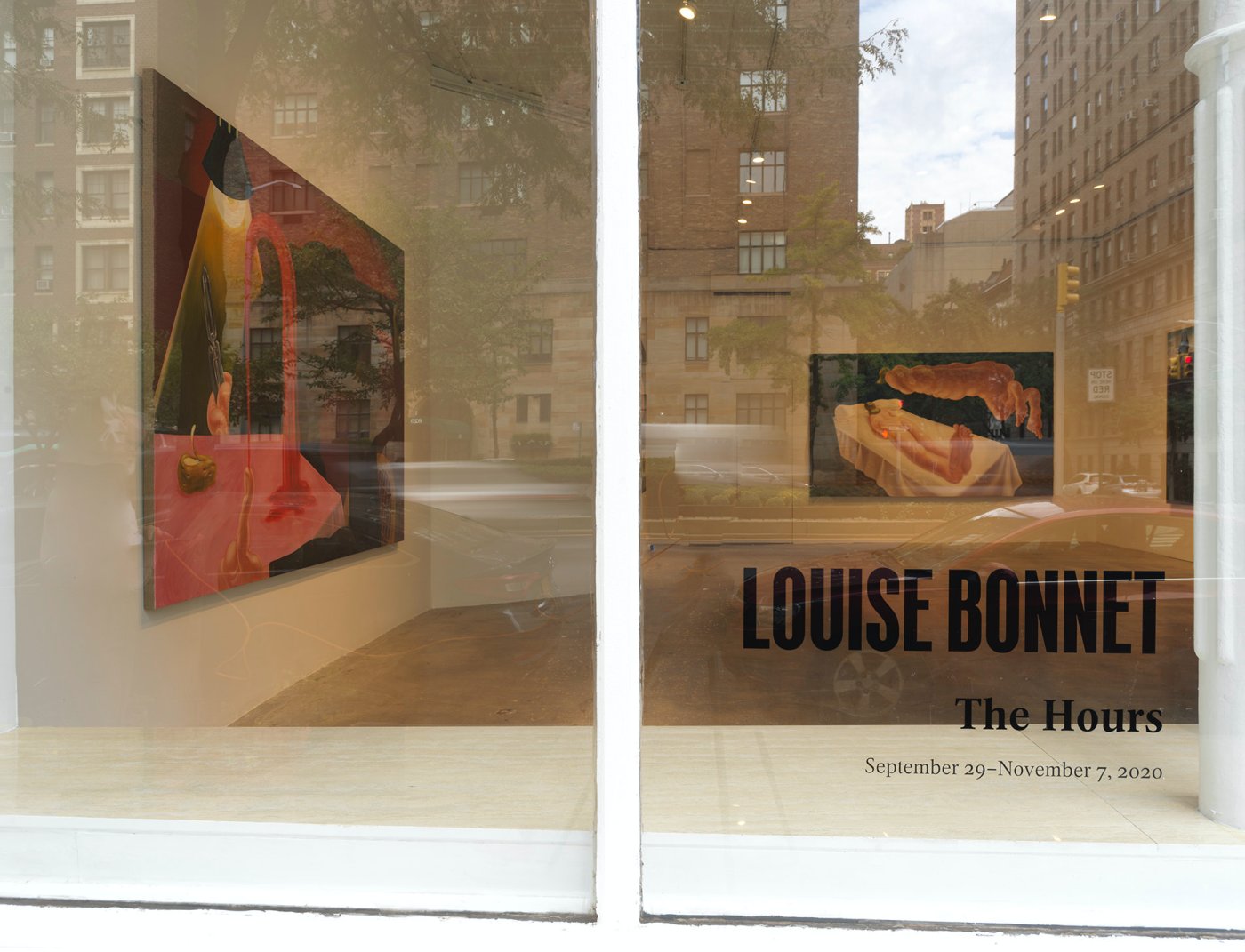 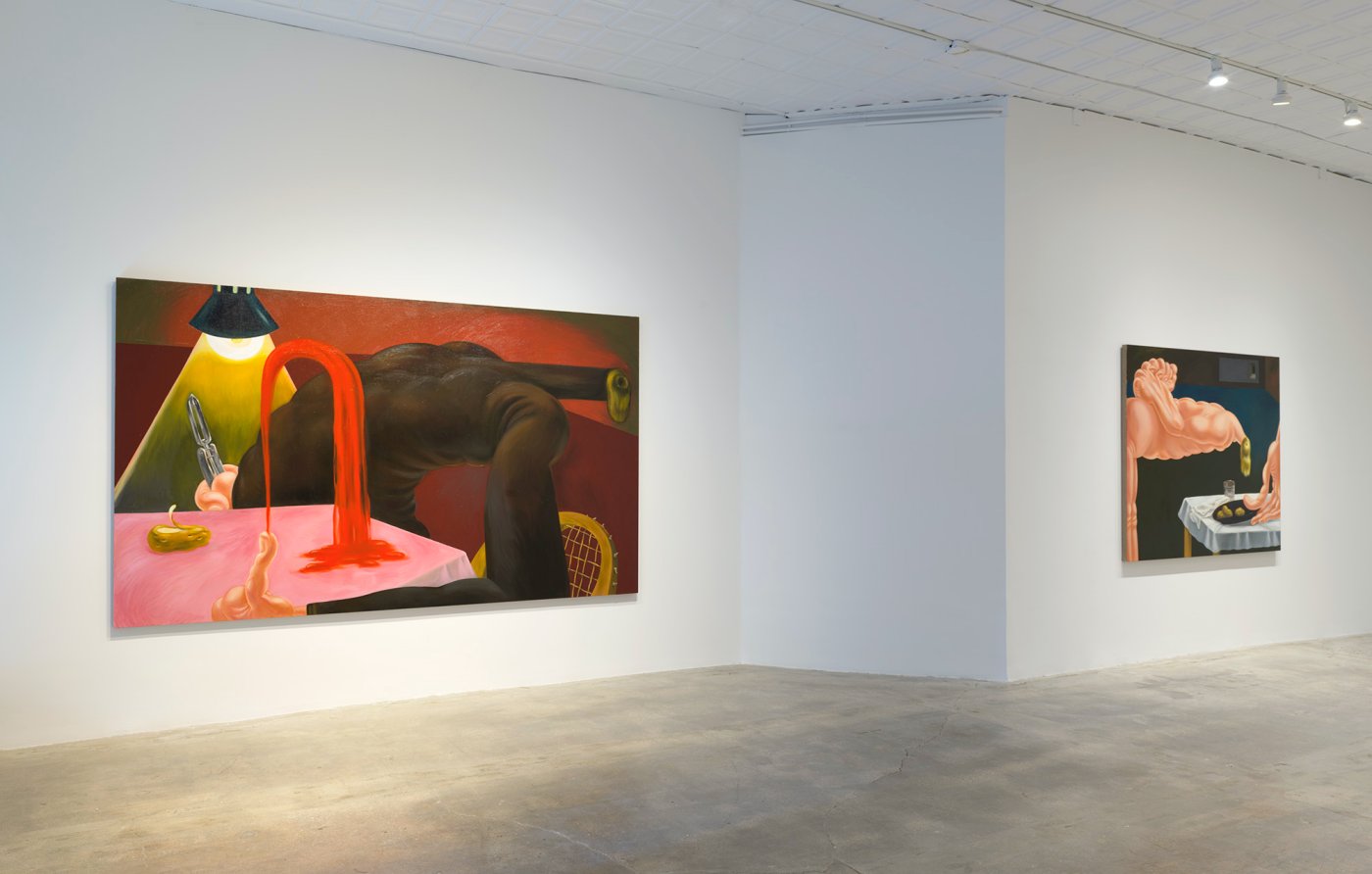 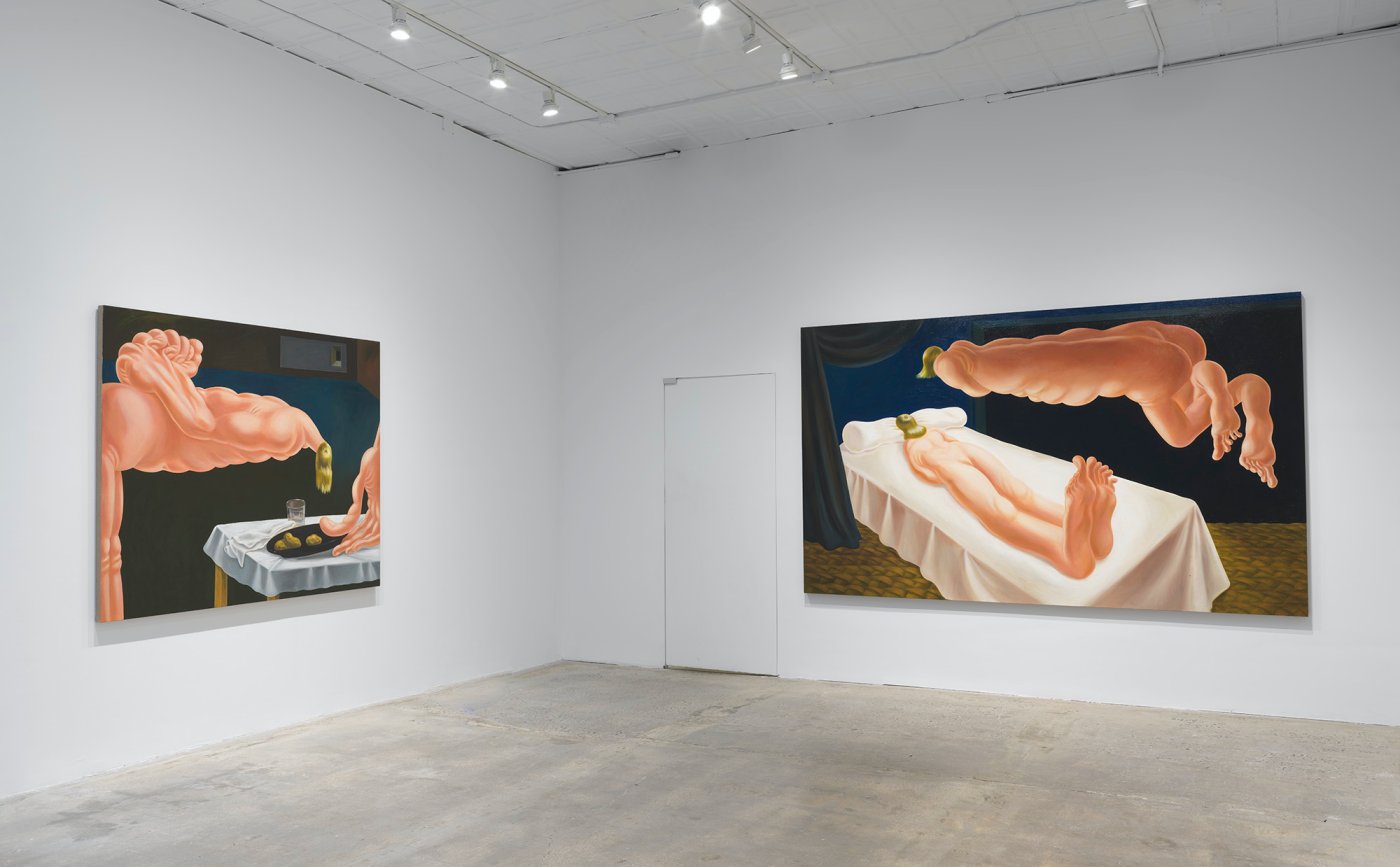 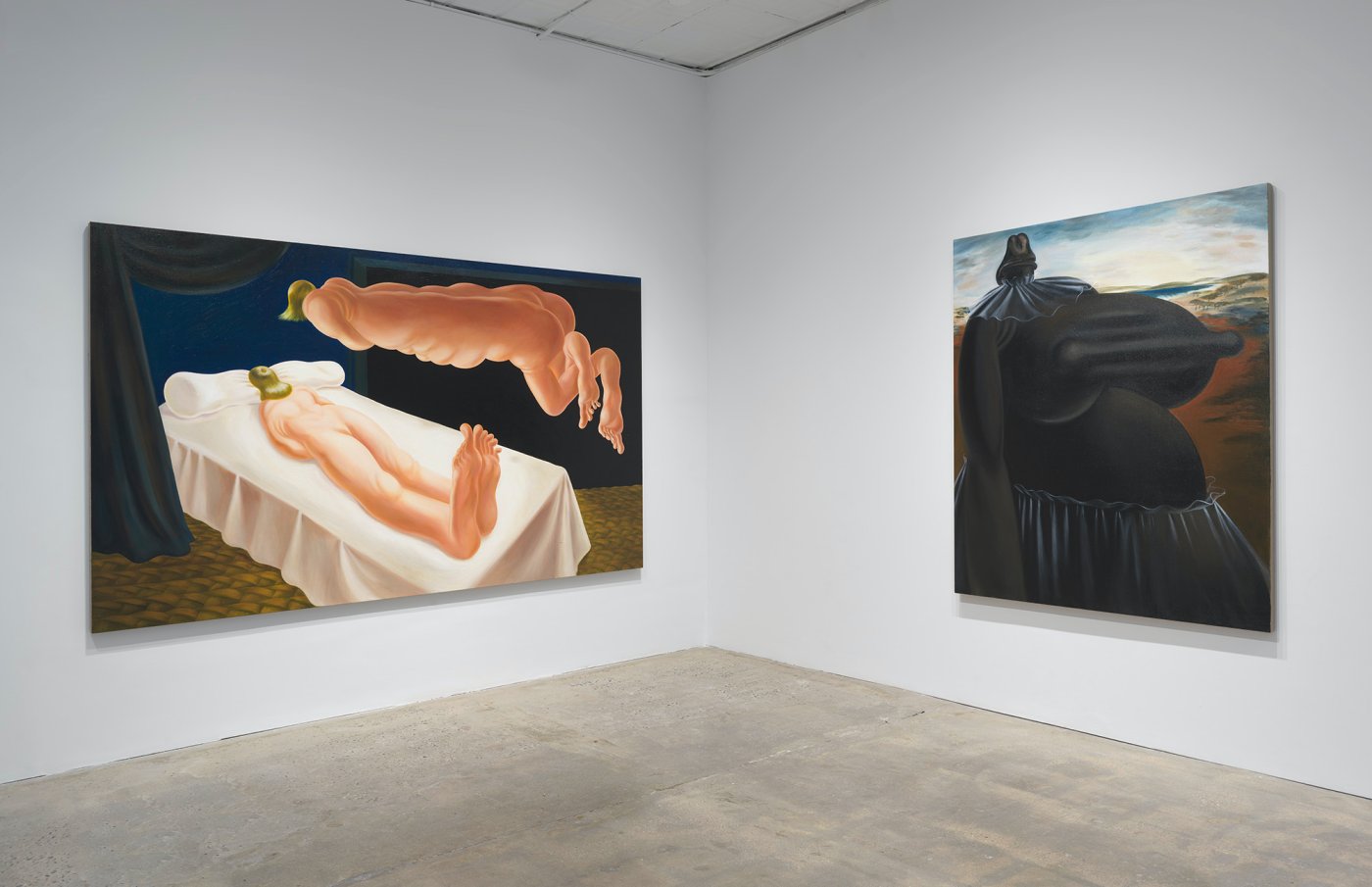 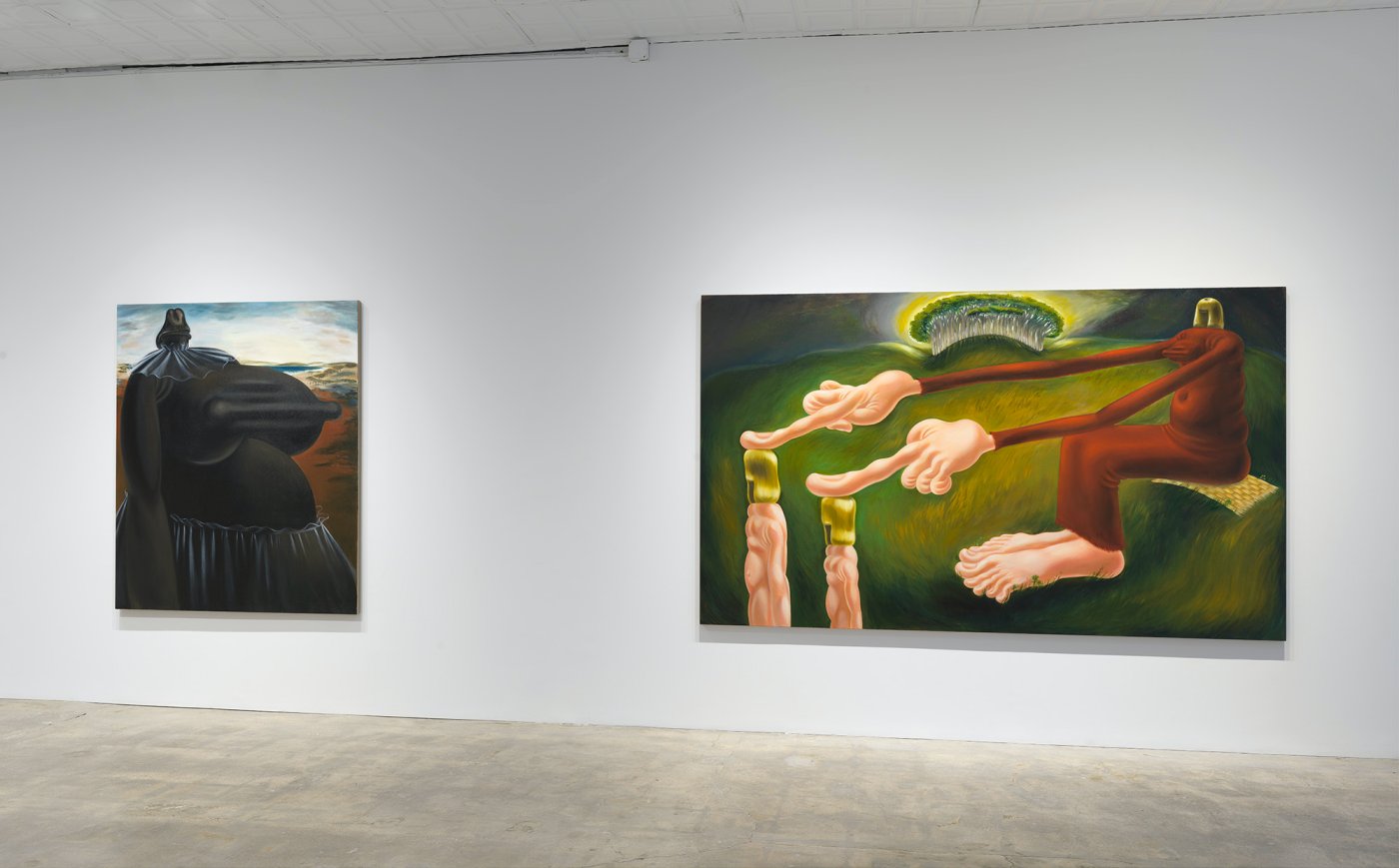 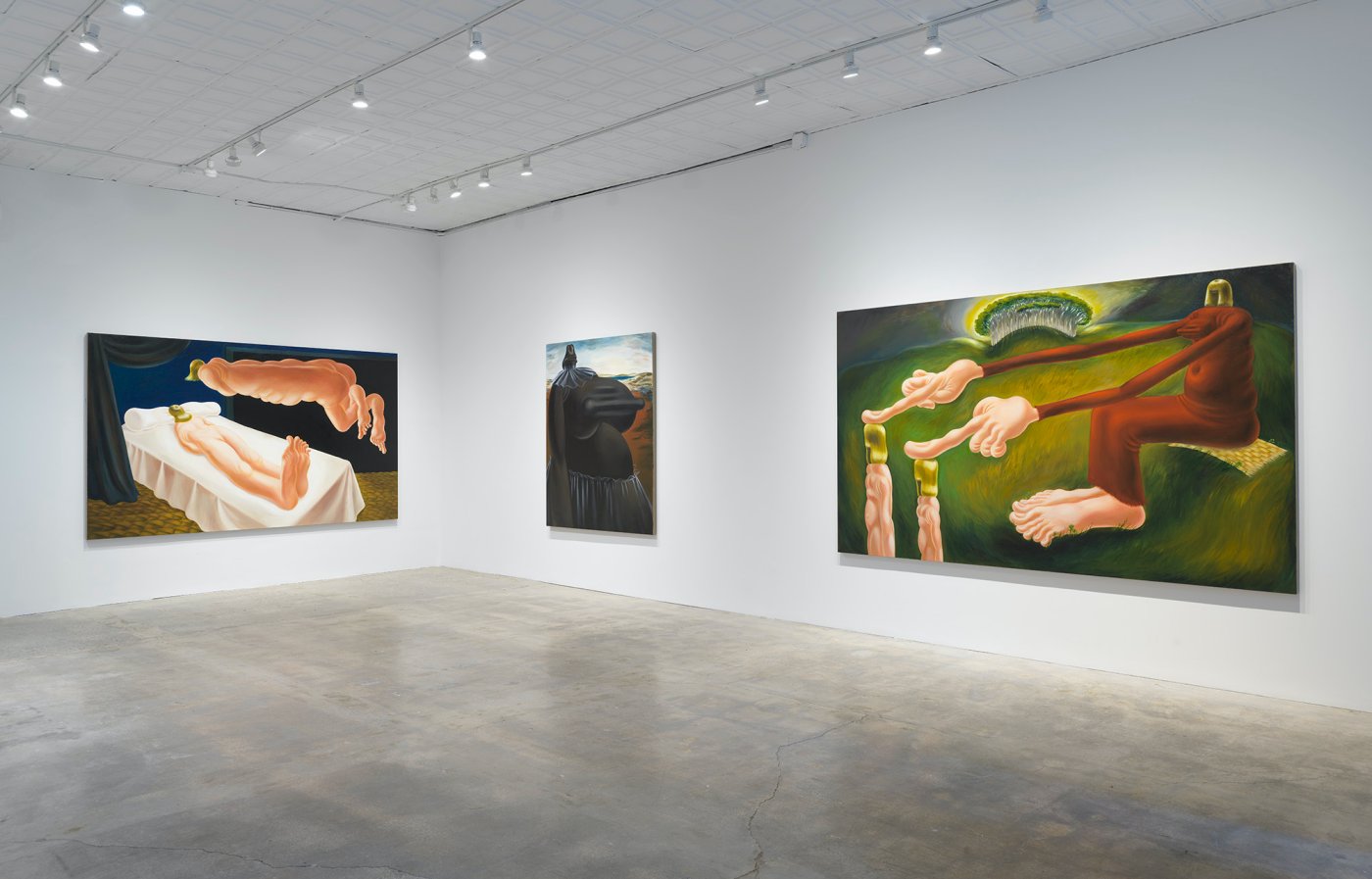 These paintings were inspired by medieval illuminated manuscripts such as the Très Riches Heures du Duc de Berry (c. 1412–16), the “books of hours” that functioned as time planners through the depiction of daily prayers and seasonal activities. However, rather than honest labors, Bonnet’s Hours foregrounds a series of impossibly distorted, ambiguously gendered figures engaged in nightmarish variations on mundane routines, such as eating and sleeping. Reflecting the nature of human experience during the crisis of the current pandemic, Bonnet’s figures, with their bloated extremities and faces devoid of features, are uncanny embodiments of emotional tension.

As its title and inspiration suggest, The Hours also mines the rich history of Christian imagery in European painting. Calvary with Potato (2020), for example, depicts blood gushing from a wounded finger—a synecdochical allusion to Jesus on the cross and to the experience of psychological pain. But while the injured figure writhes in agony, the minute size of its wound hardly seems to justify such a performance. Bonnet’s figure, with its extended neck, also recalls the tormented subjects of Francis Bacon’s Three Studies for Figures at the Base of a Crucifixion (1944). In Dawn and Vespers (both 2020), meanwhile, she sets pneumatic female torsos against imaginary landscapes, recalling Renaissance characterizations of the Madonna.

Bonnet’s fascination with the body in extremis prompts a range of other comparisons, from Lucas Cranach the Elder and Caravaggio to modern and contemporary iconoclasts such as Philip Guston and Cindy Sherman, as well as satirists Basil Wolverton and Robert Crumb. In particular, The Hours emphasizes the sexual perversity of the figures: the enormous breasts of the subject of Vespers (2020) are bound by a length of rope, while in Visitation (2020), the spectral double of a supine figure hovers overhead, naked and sexless.

While these paintings are marked by Bonnet’s confrontational wit and macabre sense of the absurd, they also attest her skill in capturing subtle chromatic luminosities in oil paint. She brings these fantastical images to life by setting each one at a particular time of day, rendered in nuanced chiaroscuro. Together with her extreme manipulations of scale and perspective, where figures are often boxed uncomfortably within the edges of the painting, Bonnet illuminates her inner life within terms that are vividly surreal.