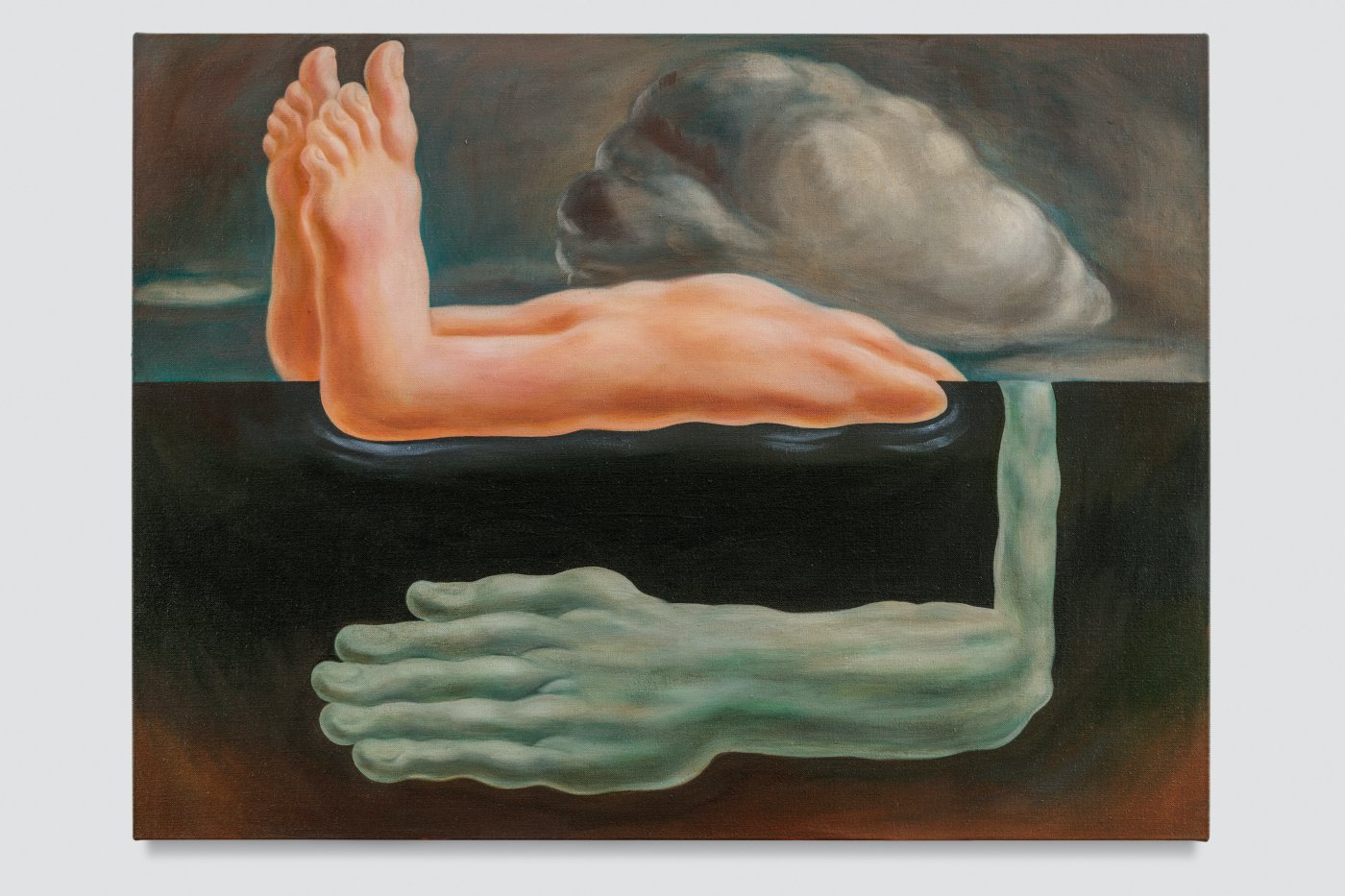 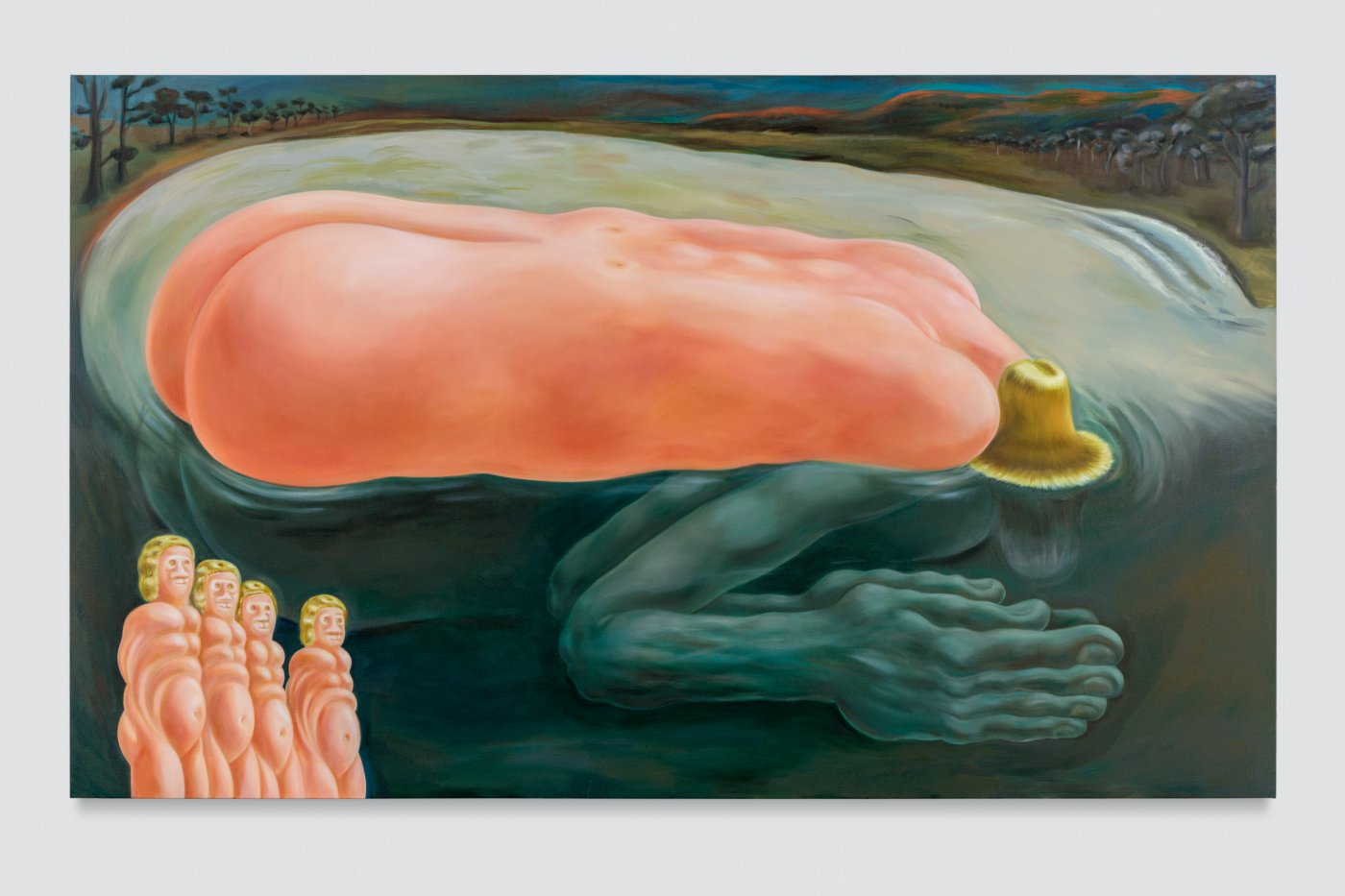 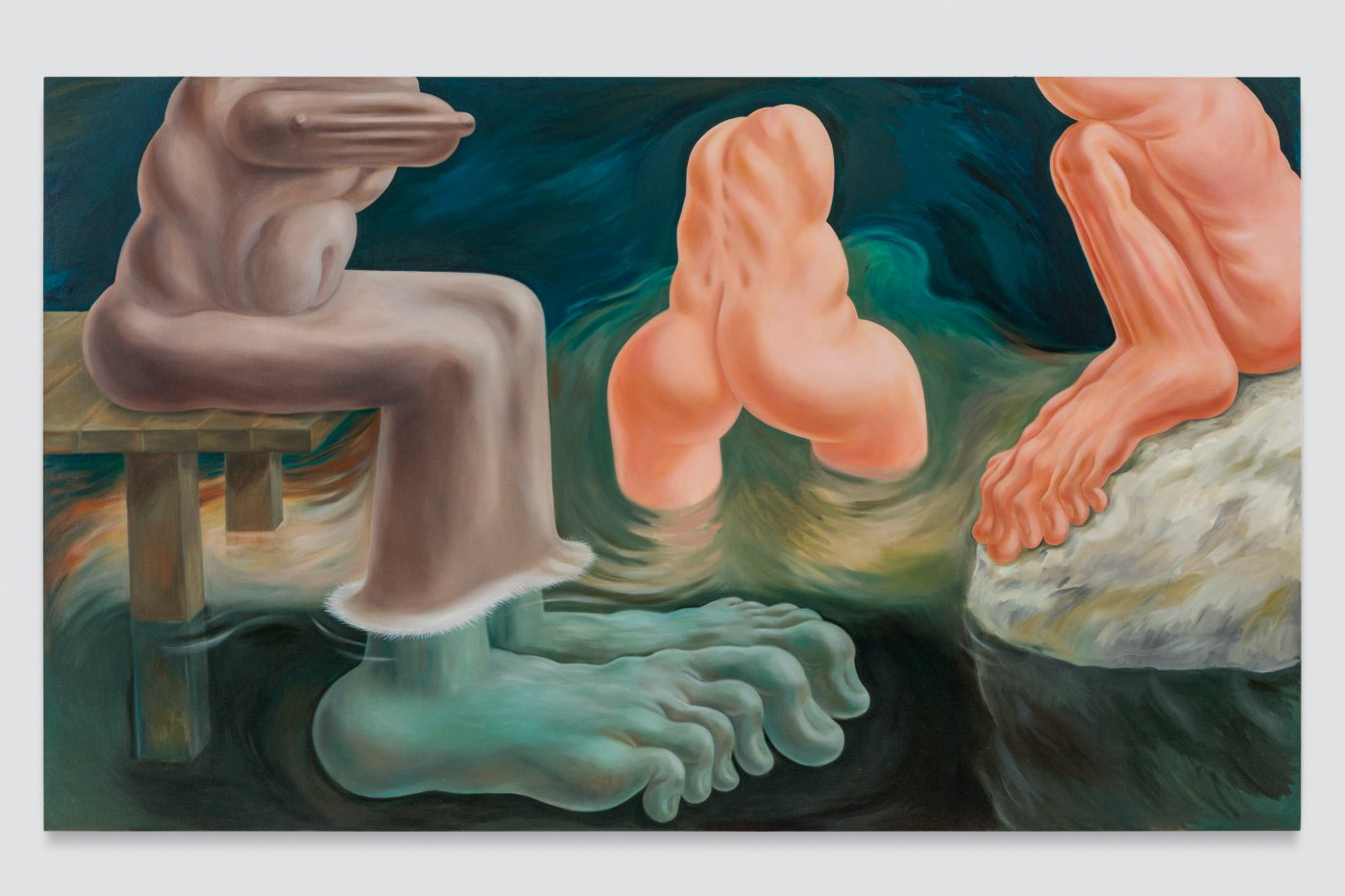 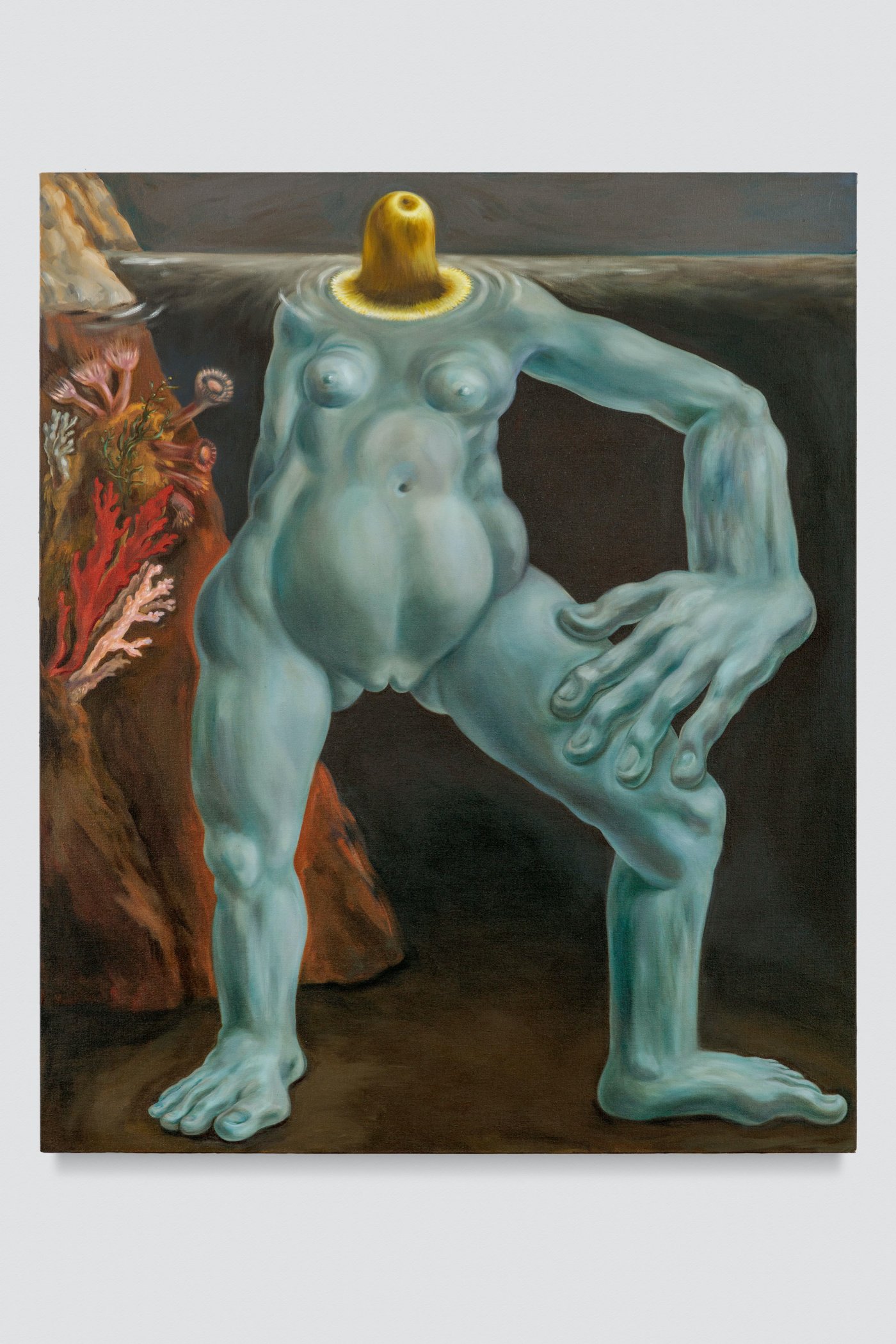 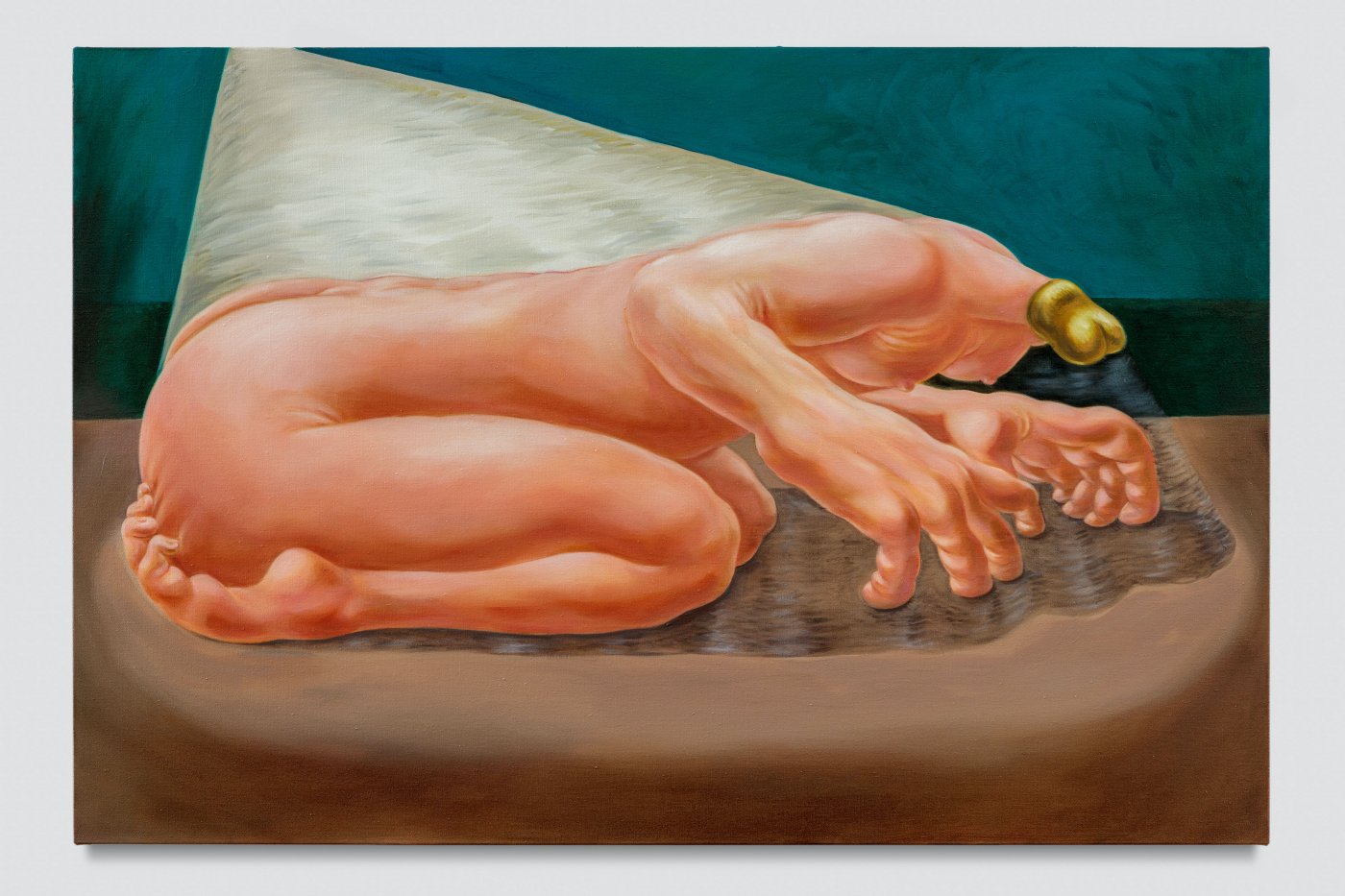 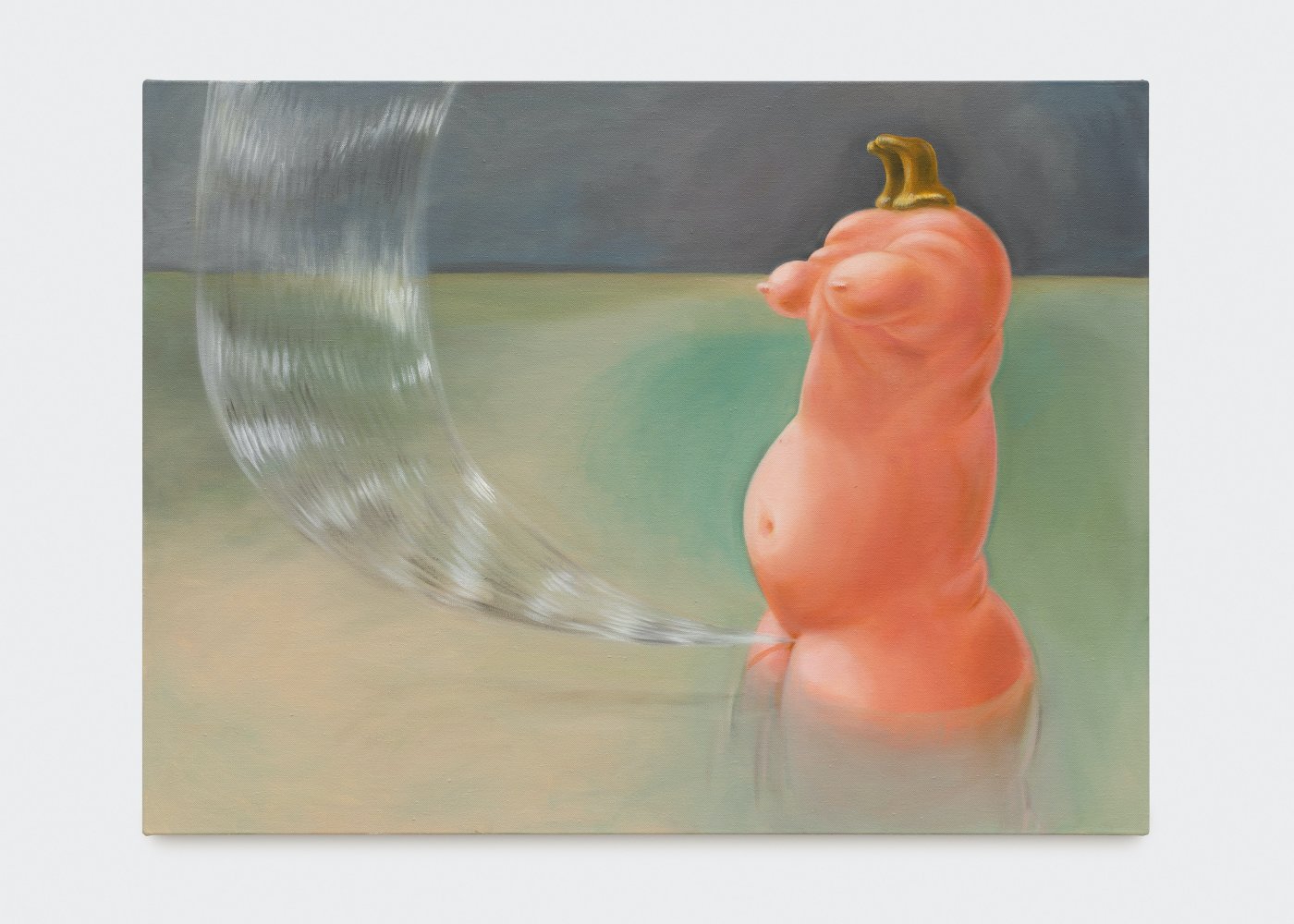 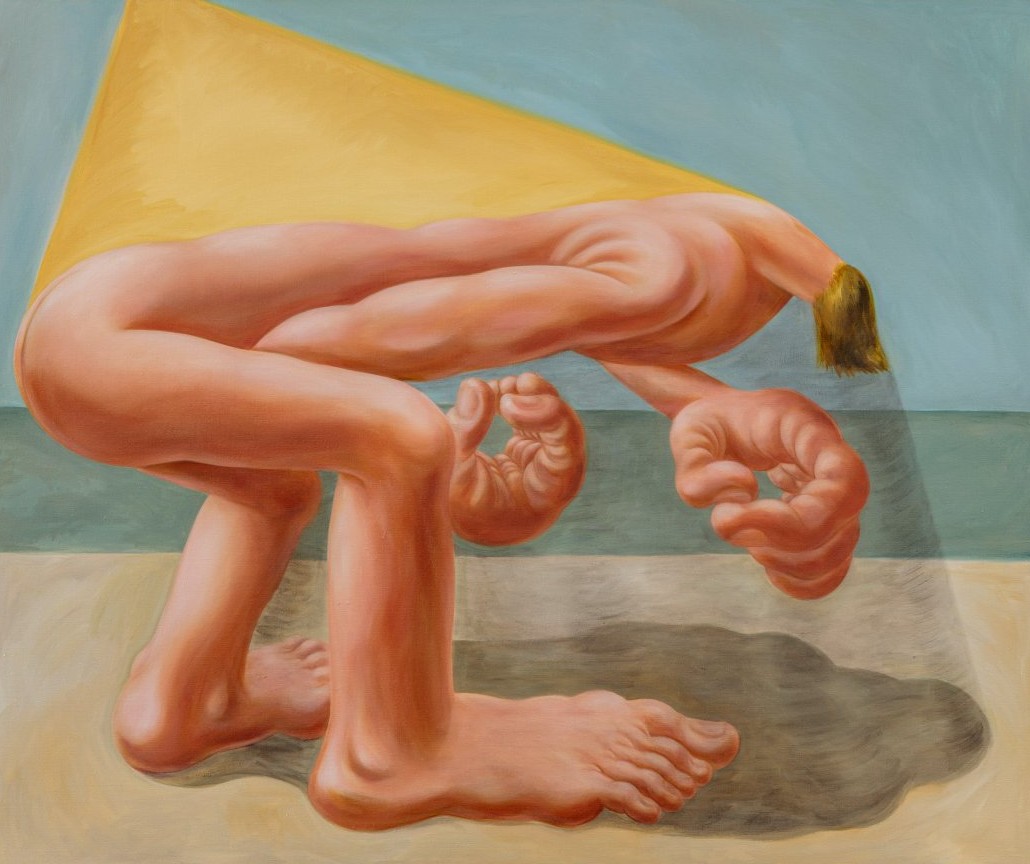 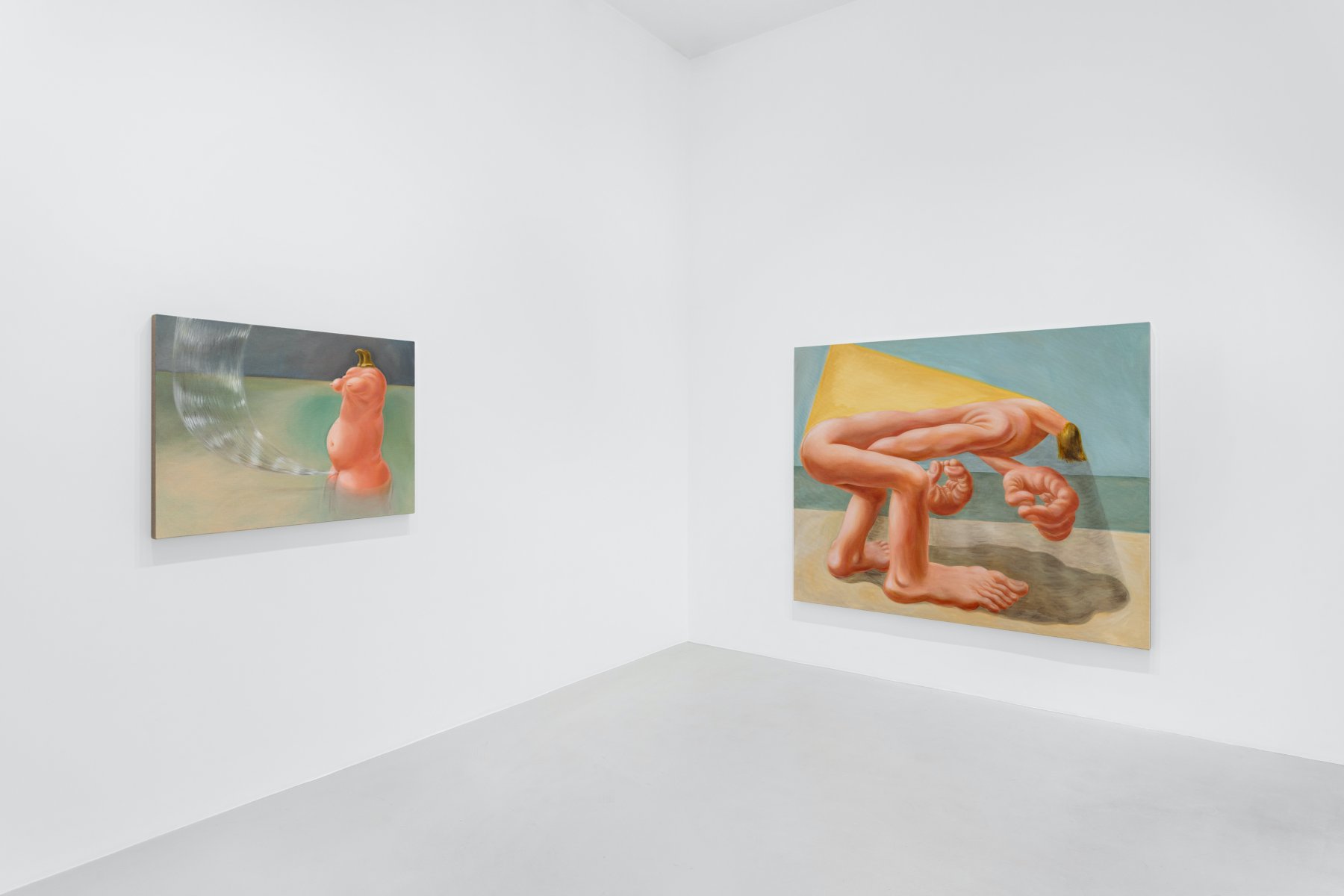 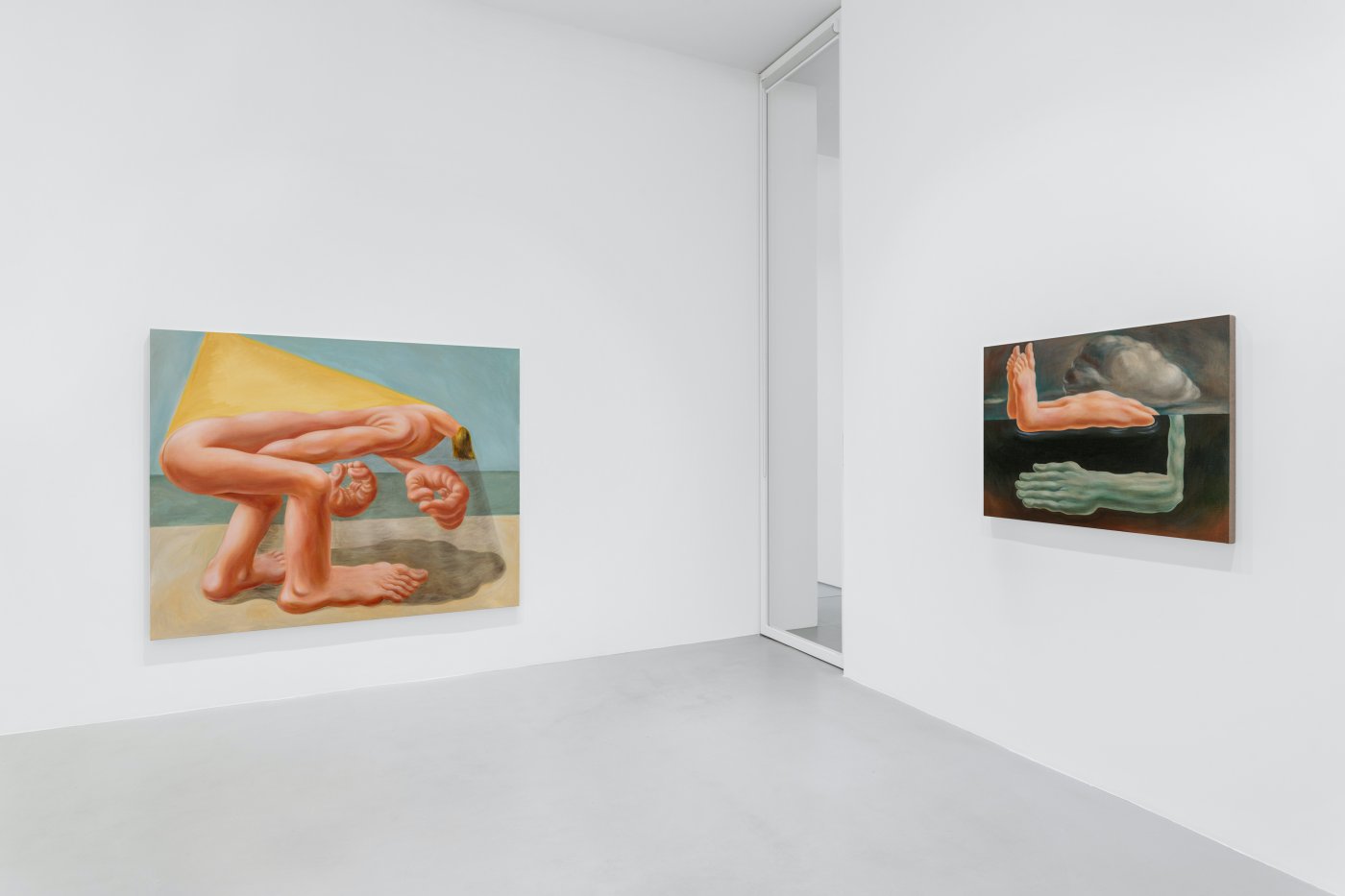 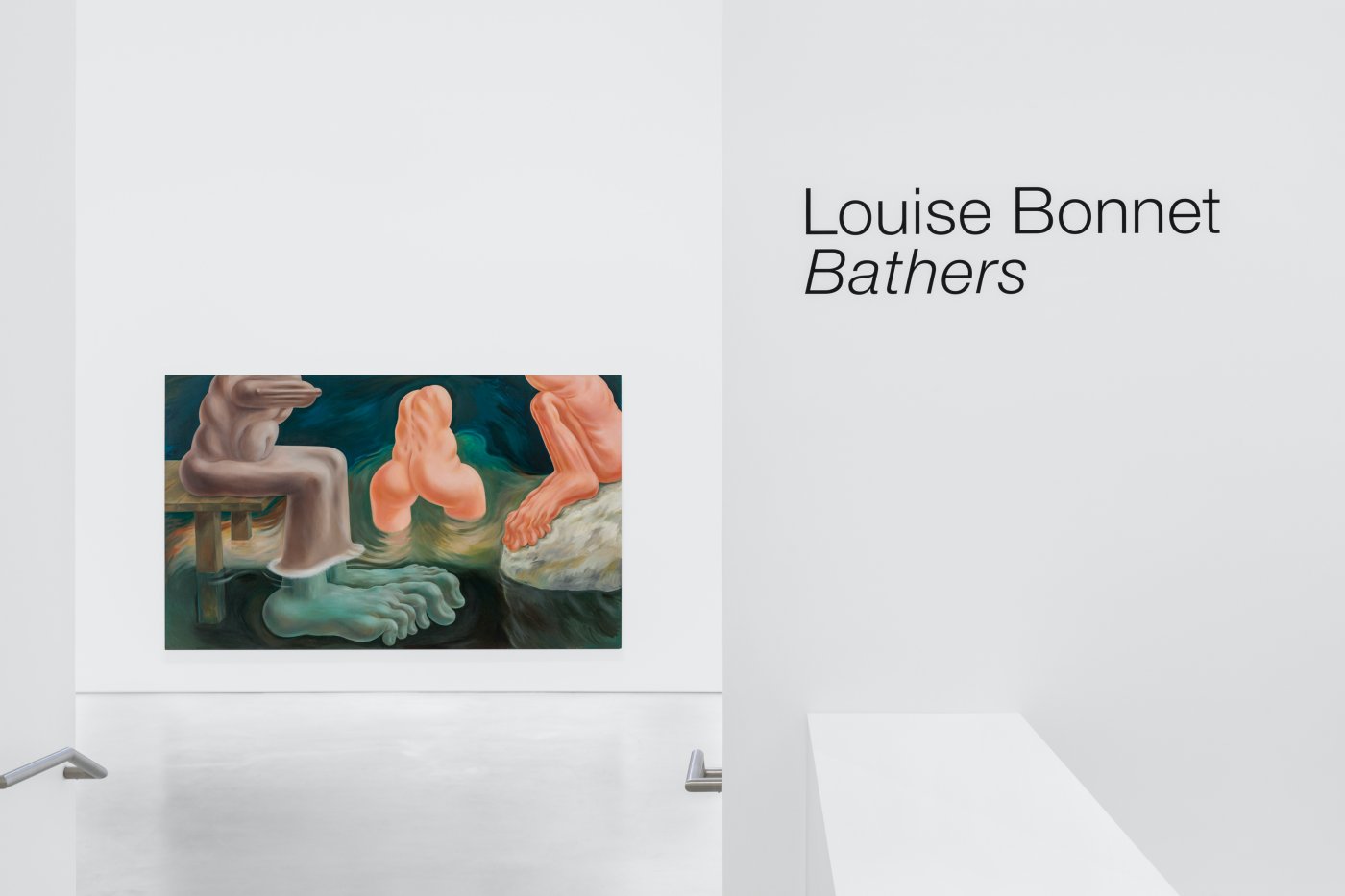 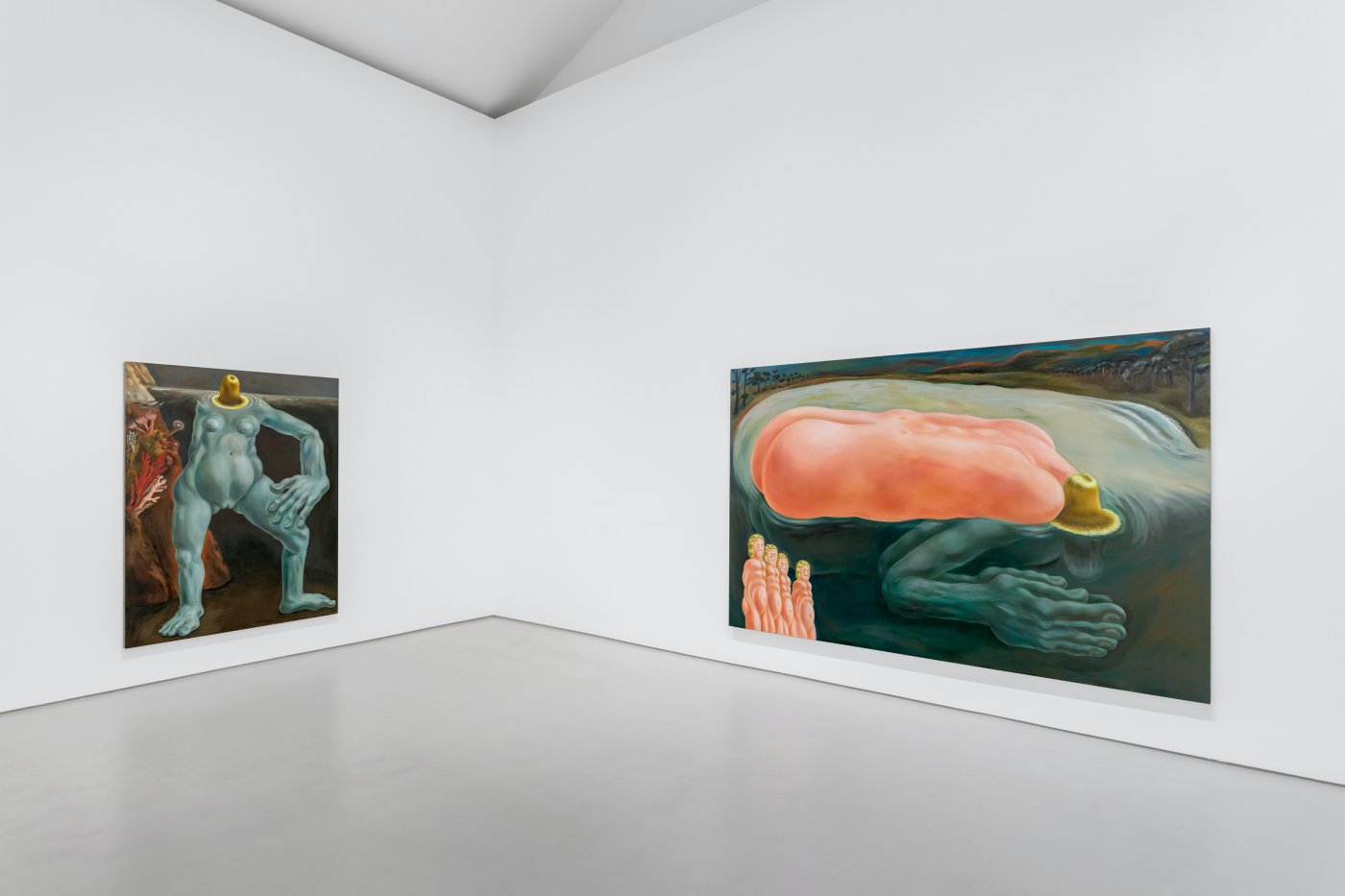 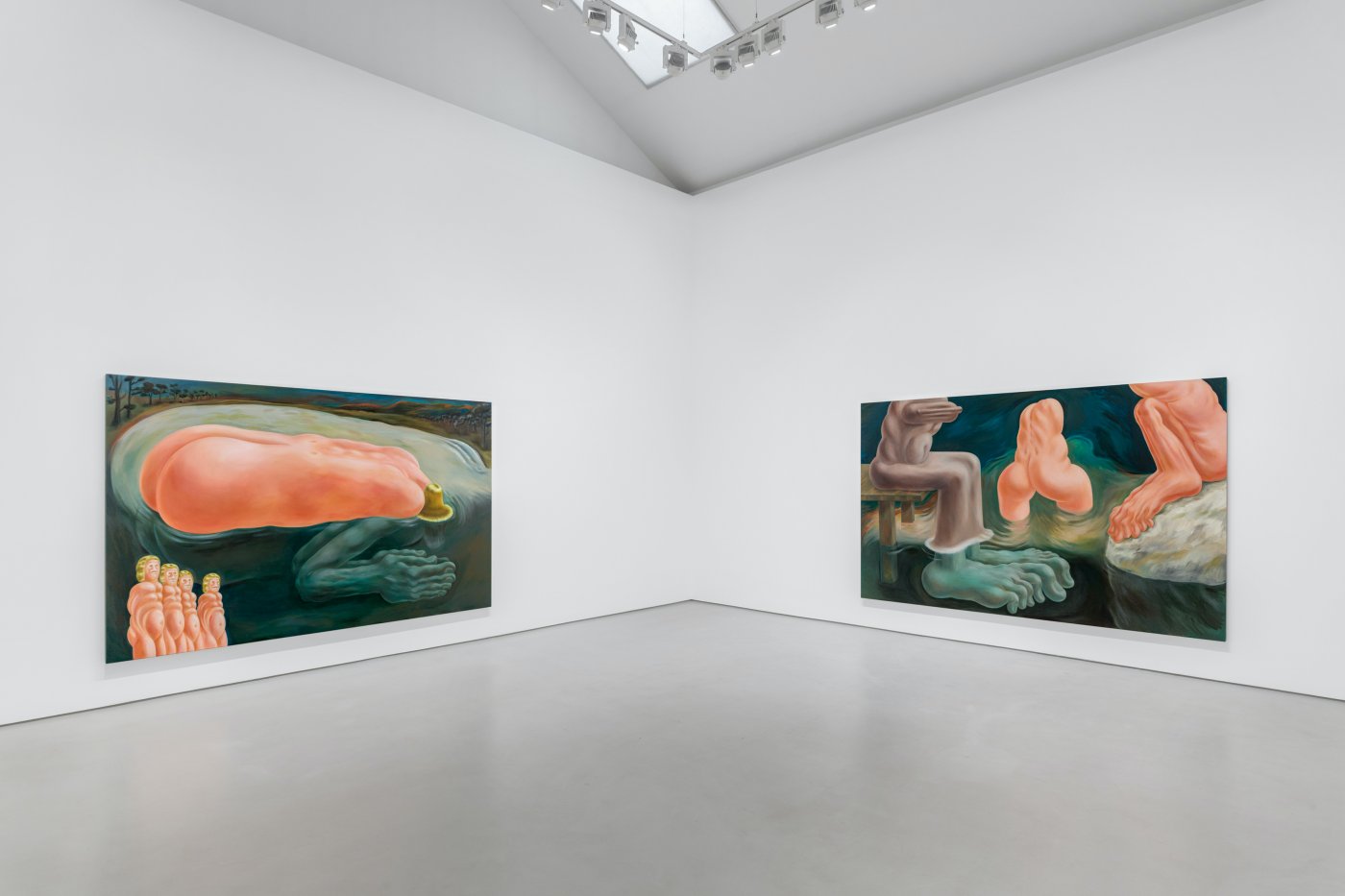 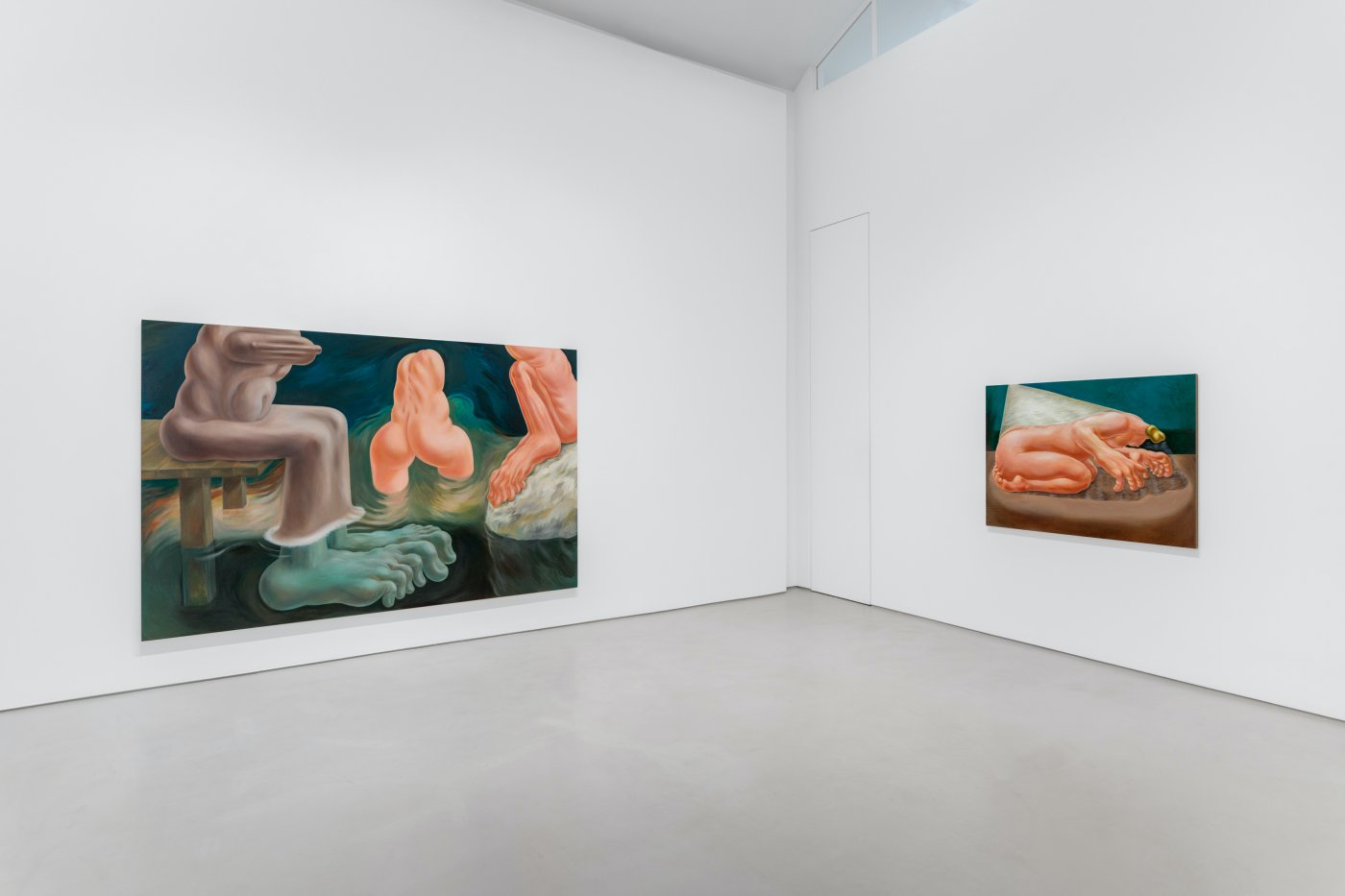 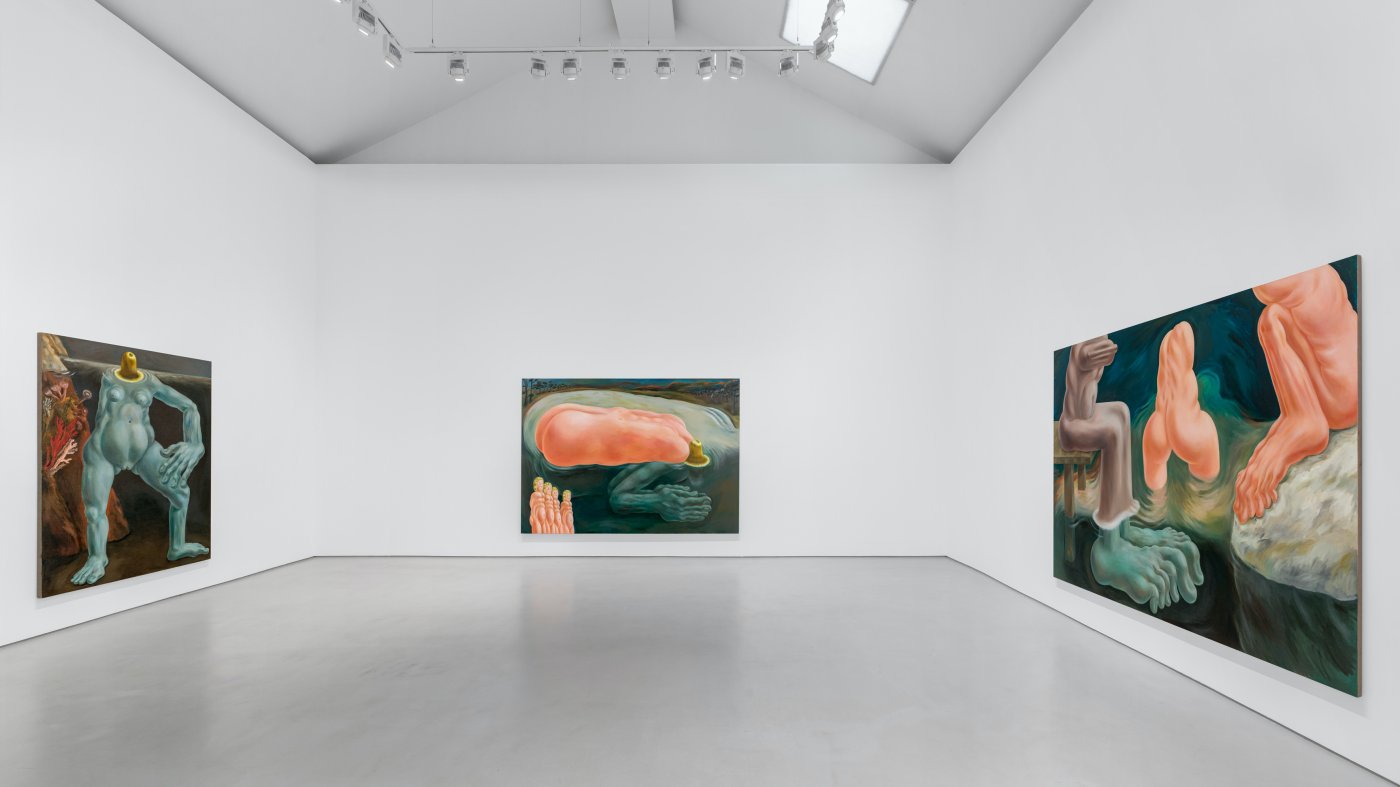 Louise Bonnet’s works are instantly recognisable: human figures with exaggerated features take on dramatic poses, often bent as if in sorrow, recoiling as if in fear, or supine in grief or shame. The overly emphasised proportions of individual body parts, mostly of feet and hands, capture the profound weirdness of the human body and its reactions to our feelings. Bonnet has long been interested in how we feel within ourselves, how we react to our own emotions and the shame and embarrassment that ensues when we are unable to control our bodies and emotions.

The inspirations for Bonnet’s imagery range from medieval manuscripts to Renaissance and Old Master painters, to Underground comix. While she plays on signifiers for sexuality in her visual language, gender is sometimes difficult to assign to the figures. They are sometimes missing a head or limbs, or else parts of the body are invisible, cut off from the composition which is boxed in by the edges of the canvas. The figures also have a strange anonymity about them, which is the result of their general facelessness, another important feature in her work. The influence of Flemish Renaissance painting on Bonnet is evident in her depiction of the nude, and was further enhanced by her use of oil paint from 2013 onwards: “For years, I tried to make acrylic do what oil does. Working in oil was a revelation.” She has spoken of her joy at discovering the possibilities which this technique offers in the creation of depth and light.

Titled Bathers, the new series references a well-known trope in the history of art. Here, Bonnet’s treatment of the nude body owes much to Peter Paul Rubens (1577-1640), with chromatic variations from pink to blue in the depictions of the flesh, which are very like his treatment of the nude, and compositions echoing such masterpieces as The Judgement of Paris (c. 1632-1635).

The water offers an added sense of dissociation, a change in perspective, a deformed view of the body, an angle as to what is hidden, what is under or above, what is visible and what isn’t, taking away clues as to what the figures are actually doing, adding a layer of mystery to their emotional states or actions; a couple of works, titled Pissing Figure are self-explanatory, projecting a sense of pollution, invasion, or a link of connection between the pissing figure and its environment.

The works offer highly intimate glimpses into the tender mental states of the figures depicted. The viewer’s projected feelings and associations amplify this sense of dramatic emotion, as strange and lonely environments reflect the inner turmoil of both figures and viewers alike.