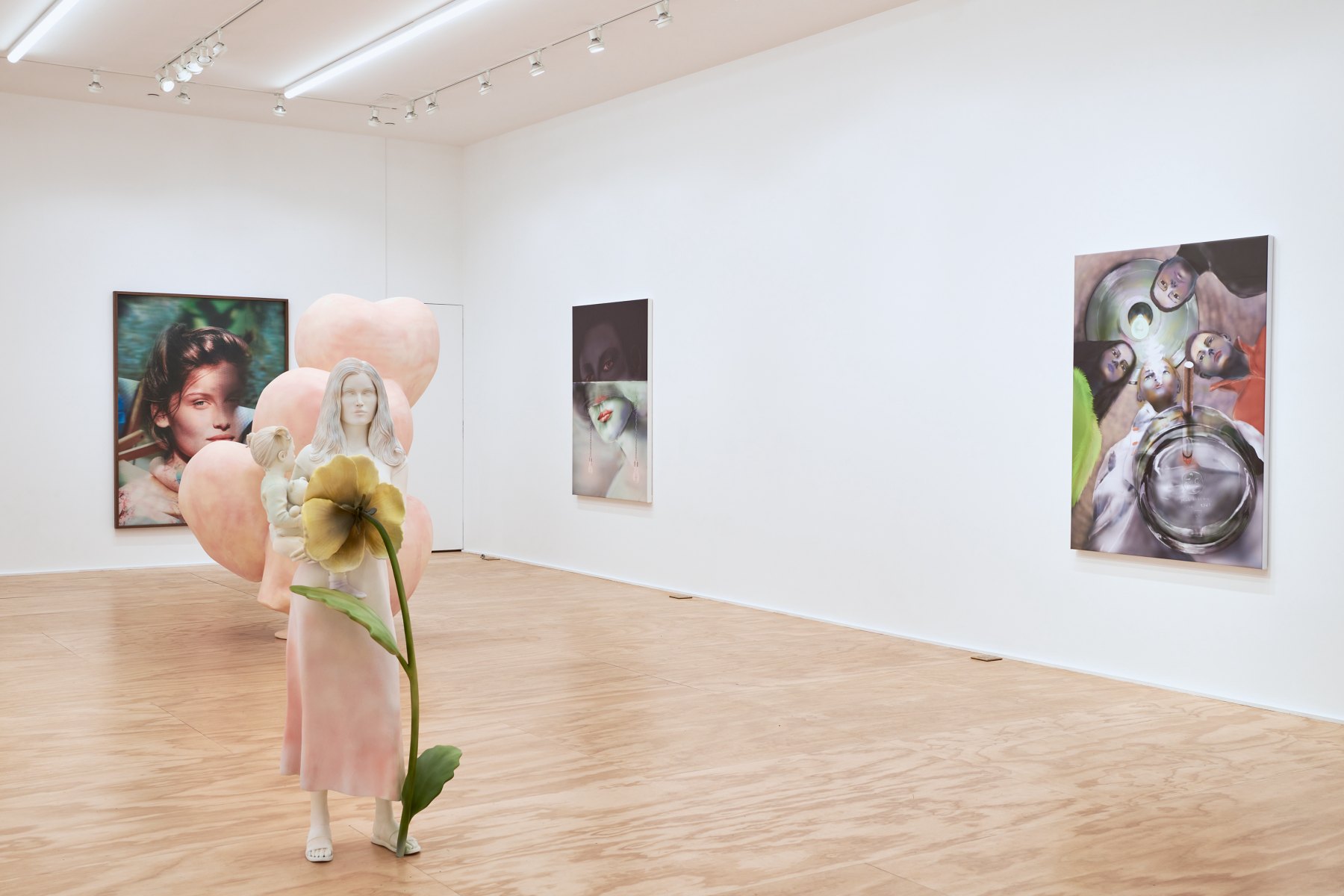 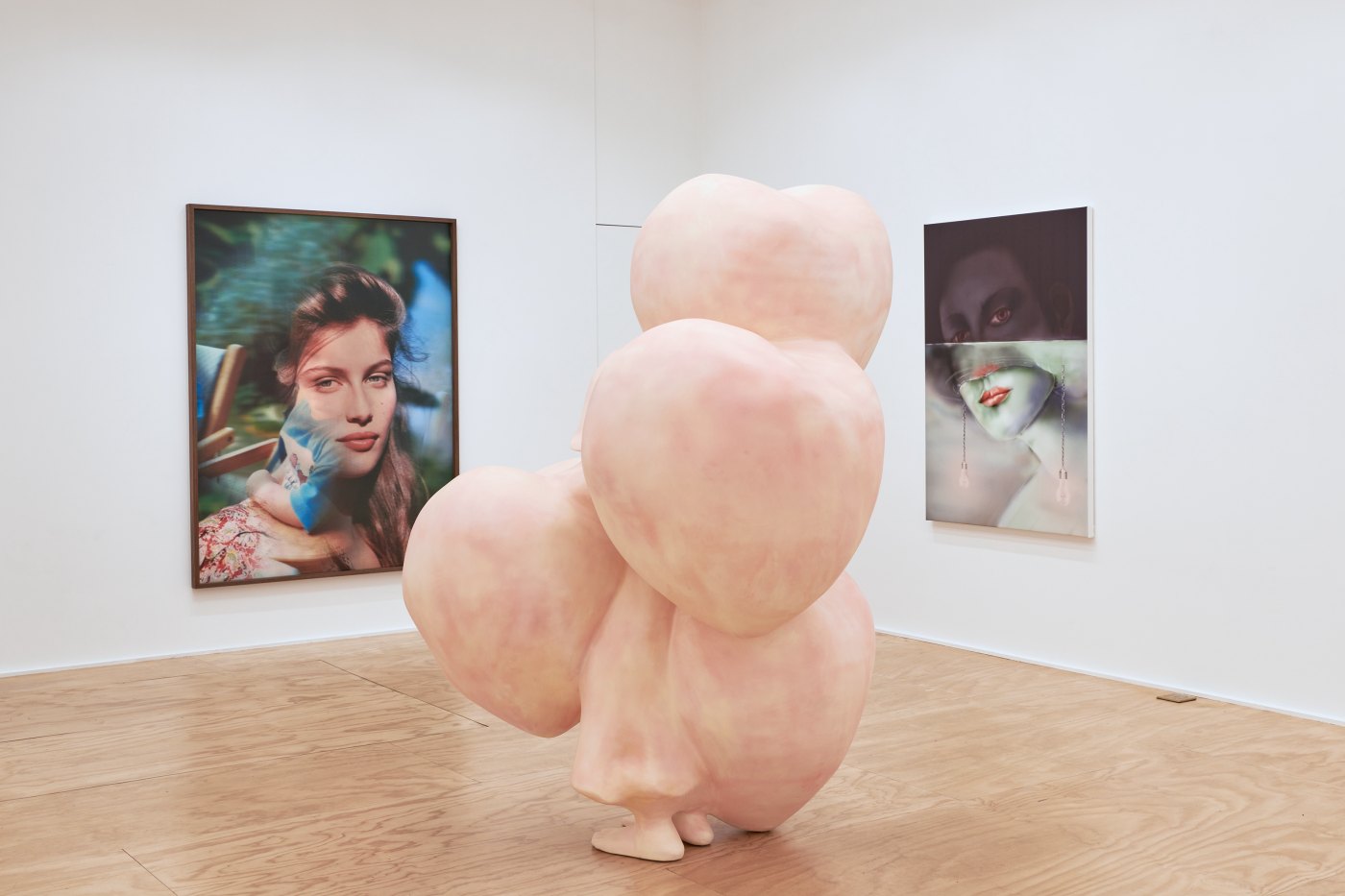 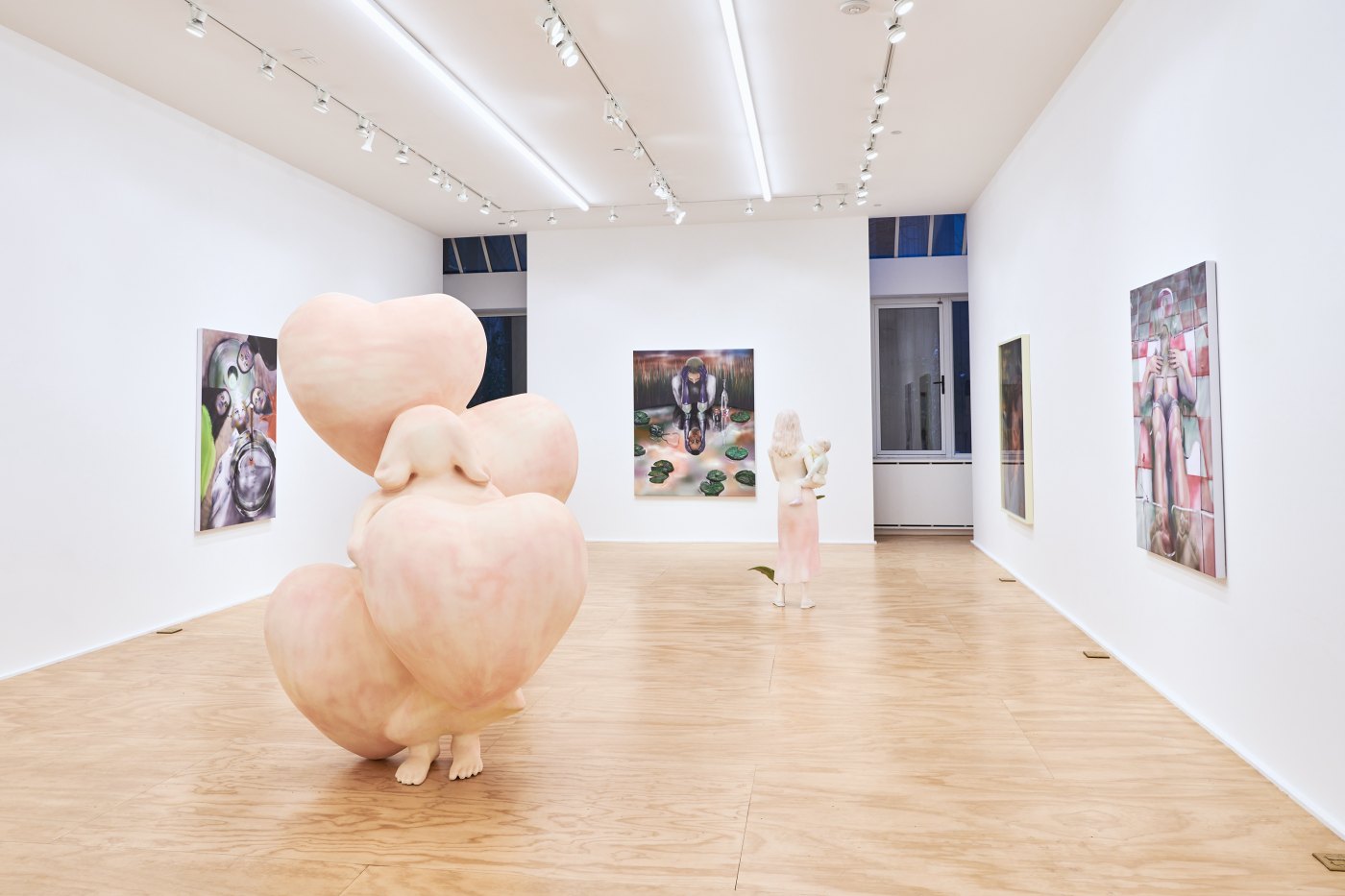 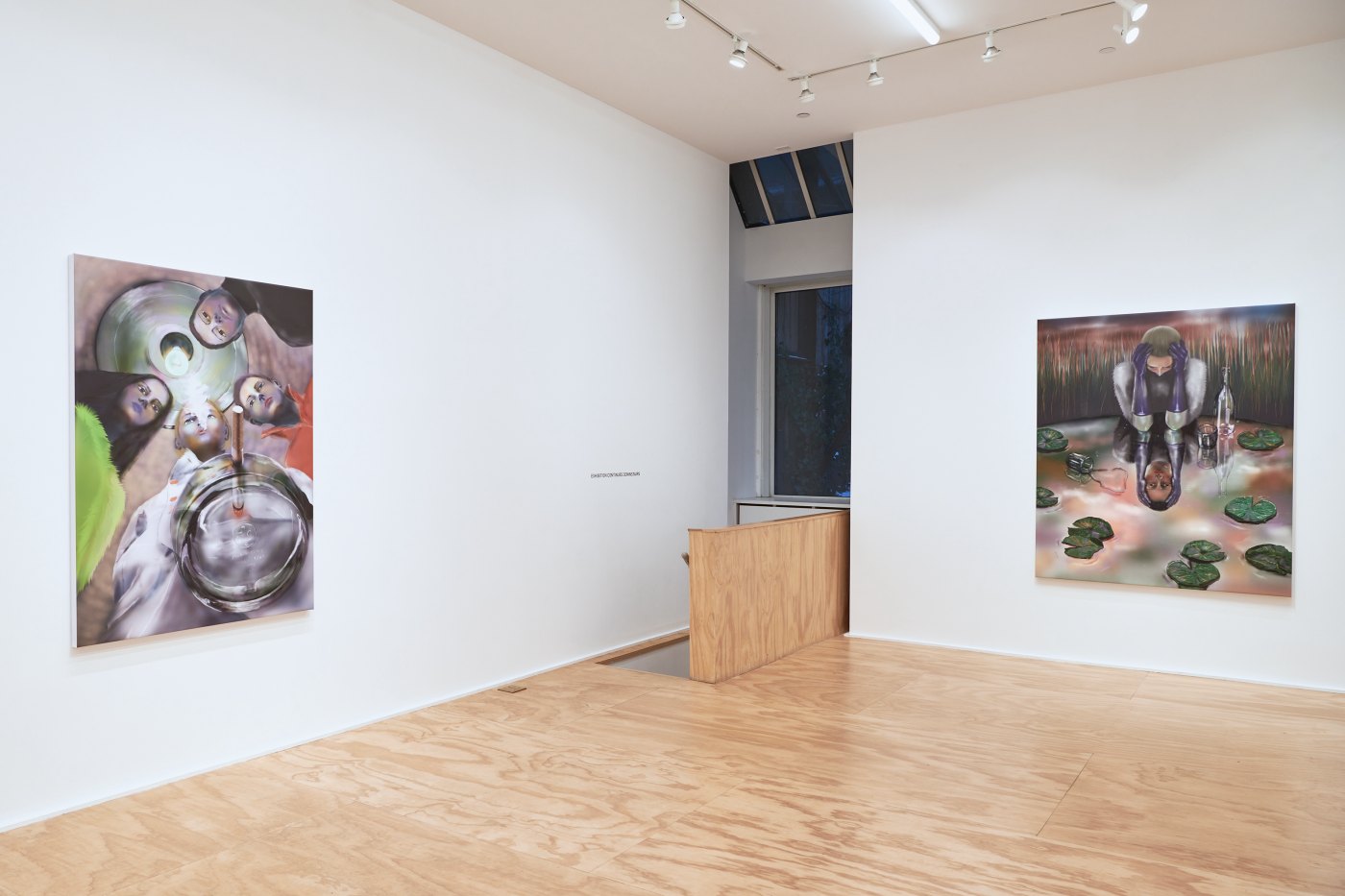 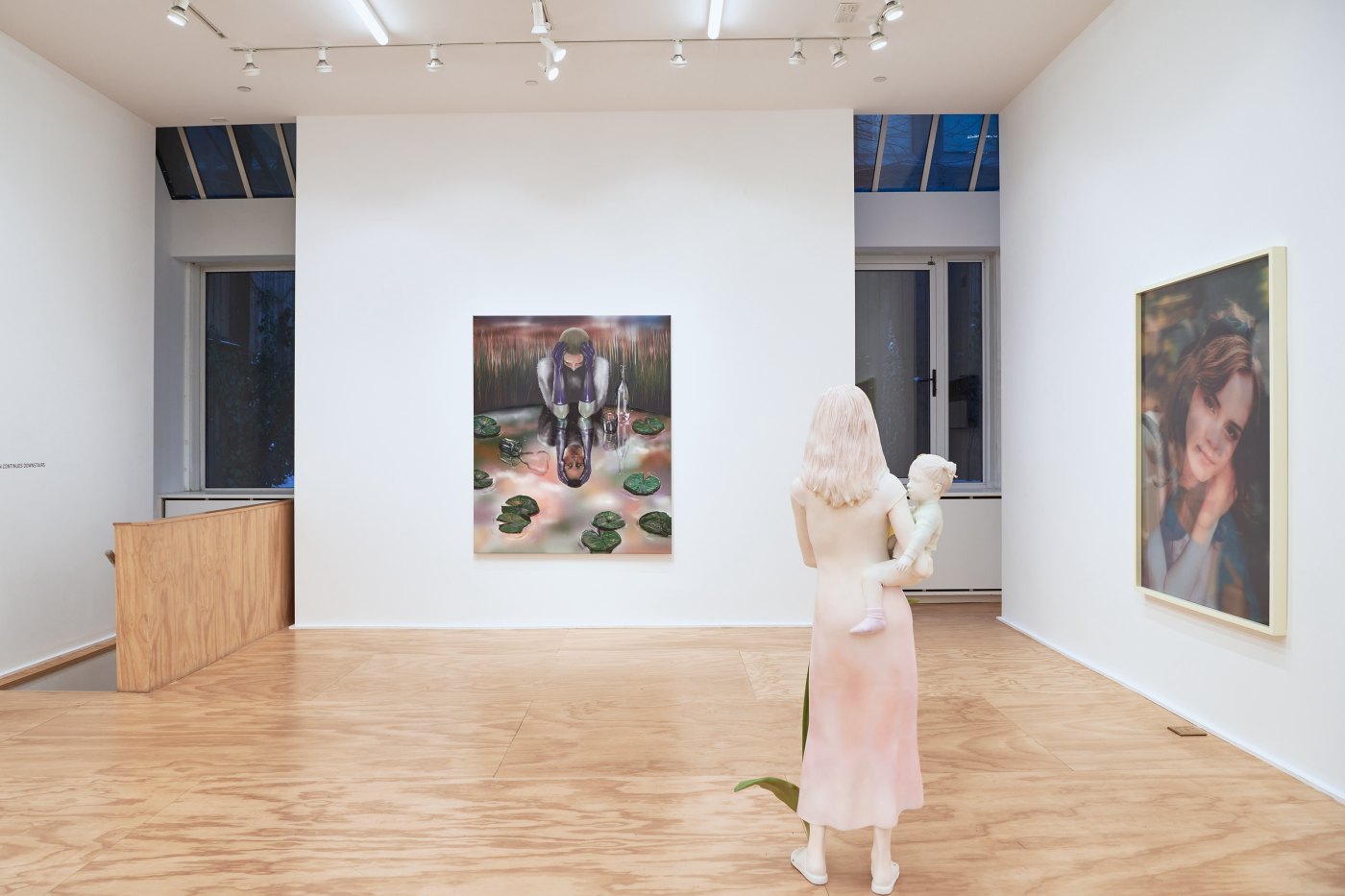 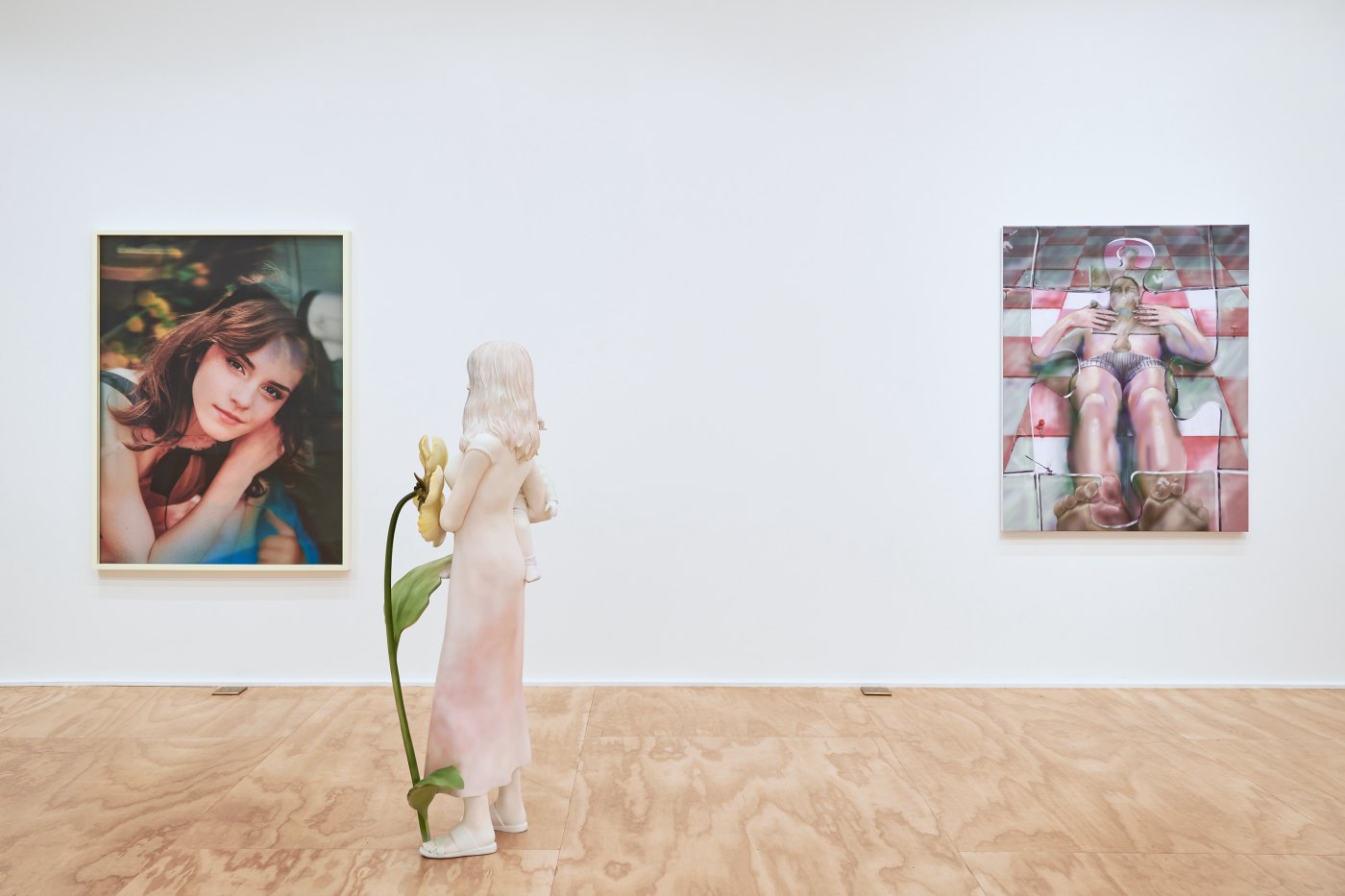 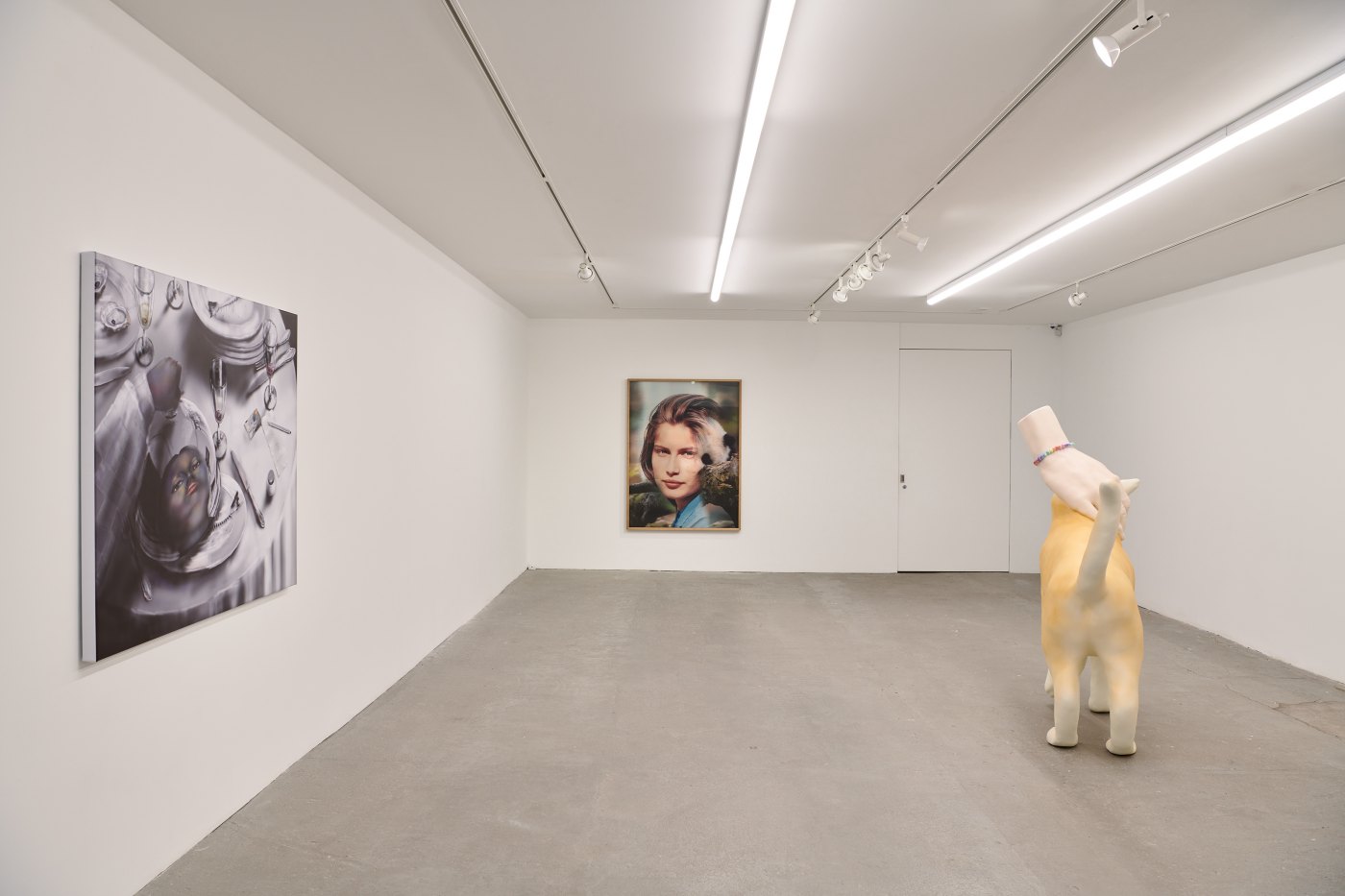 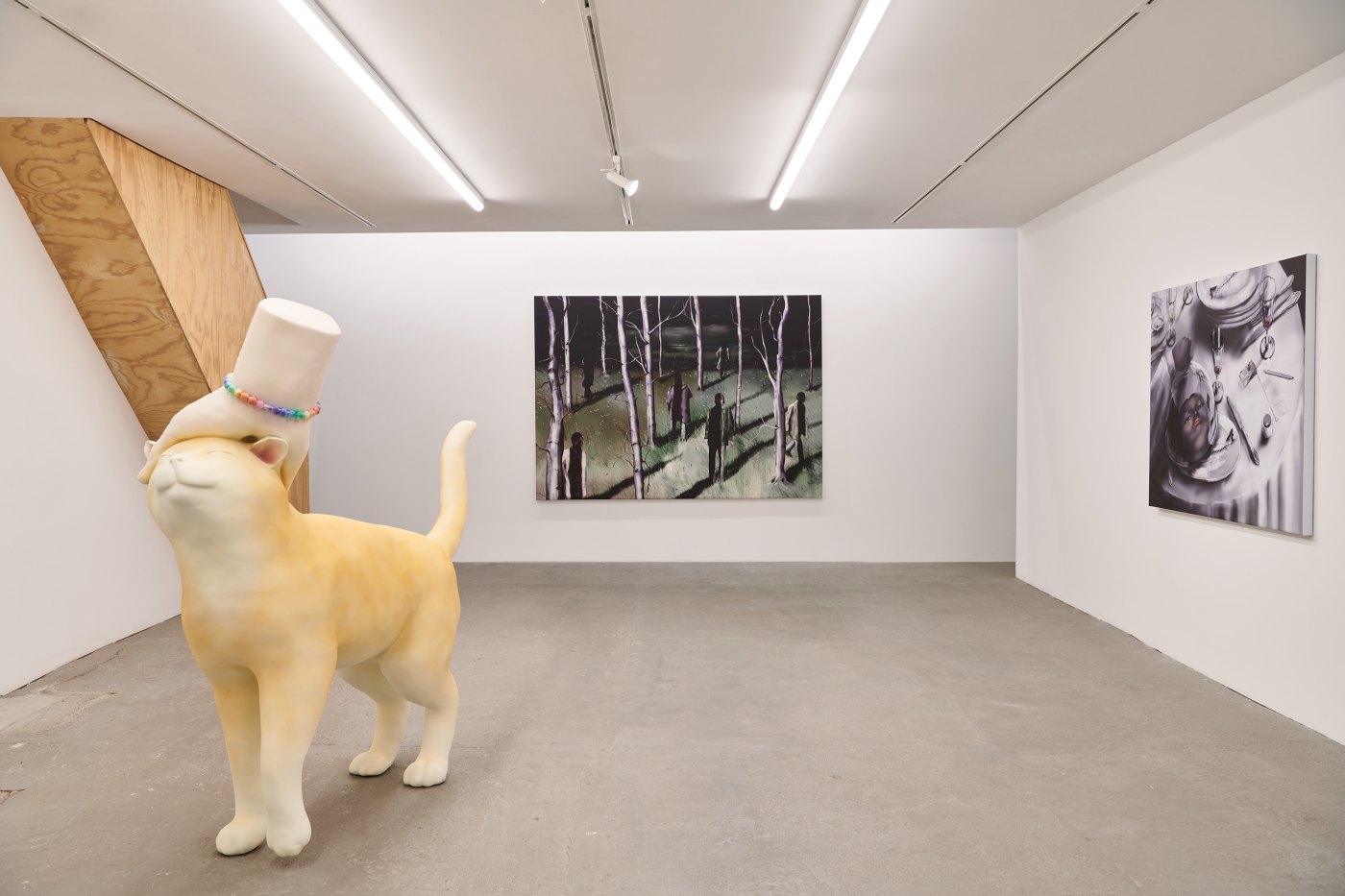 Louisa Gagliardi’s paintings exist as reflections: internally, of artist and viewer, and of the rapid acceleration of technology in our visualized and socialized worlds. Their liminal status, as both digitally rendered images and physically confronting objects, speaks as much to contemporary concerns of self-mediated personas as they do to the compositions and narratives of the classics of art history. Current directions in graphic design meet the unspoken codes of social media platforms, which are forced to confront and collaborate with a deep heritage and reinvention of the craft of painting running through Francisco Goya and Leonora Carrington into the present.

At its heart, Gagliardi’s oeuvre plays with expectations, fulfilling and subverting them simultaneously. When one views the work, ideas of authenticity and authorship are begged for and rebuffed; the smooth digital surfaces of the paintings blossom into echoes and refractions of their handworked surfaces as they are approached and circled. Brushstrokes exist physically and printed, as clear gel medium creates texture and melodrama, forcing the signature marks of the artist executed with mouse on screen to confront total issues of reality within painting. What truths and illusions painted work can project are questions as old as the medium itself, and here they are constantly upended as her imagery populates and is printed on thick synthetics, shiny aluminum, and reflective mirrors.

Gagliardi insists on the importance of the physical as consistently as she reaches back into the past for its motifs and themes, moments of drama that are indirectly repositioned in her contemporary mix. In a big way, this is work about portraiture and, therefore, exists at a line of the past meeting the total present. Her reinvention of this genre comes at a time when every camera on earth has made its amateur holder a professional at the presentation of self. These paintings adapt social mores to comment on the now while seemingly erasing individual and collective divisions. They are portraits of no one specifically and, therefore, are allowed to be of anyone the viewer imagines. Like avatars in the metaverse, they are empty vessels on which viewers place their own anecdotes, personal chronicles, dreams, and hang-ups.

Existing beyond traditional ideas of race and gender roles, the subjects are similar to the attempts artificial intelligence has made at visual fabrications of human faces, but without any uncanny valley and its connected creepiness. Still, we rarely glimpse the figures frontally. Gagliardi likes to interrupt the perceived space of her works with ideas and imagery of clear pools of reflection: glass, water, inky shadows. Light, the central compositional force of great painting since Caravaggio, exposes and abstracts what is shown and seen. One glimpses these figures in mediated screens, as they pose and preen for the artist and, perhaps, themselves: hiding and exposing in equal measure.

One of the great successes of the exhibited work is the way it analogically captures the backlit glow of the screens that fill our lives. With a mix of digital composition and color theory and the physical additions that break and deepen their silky surfaces, the paintings emit a collected radiance that speaks to the sublime as much as the iPhone. Like a magpie, Gagliardi collects lustrous objects and images and assembles them in presentations of the singular and the group, almost always at moments that suggest recent or oncoming chaos. It is a balance of strength and courageous vulnerability. By dealing with personas and open narratives, Gagliardi speaks to the curation of oneself both online and off. In doing so, she reaches for the timeless, how all figures interact in any form of society where one must be an individual within a whole. For a narrative as old as civilization, it feels incredibly prescient.

The work of Yves Scherer confronts the integrity of existence, in a manner that originates in antiquity and continues into the now. In both sculptural form and his lenticular works, different realities are blurred to be presented as one. Complexity orbits simplicity, encapsulated by avid desire. Perception, both biological and cultural, is questioned and dismantled as viewers reevaluate notions of depiction itself. The work is grand in both scale and means, but intimate and almost whimsical when it comes to the feeling it evokes. Polychrome aluminum, 3D- lenticulars, stainless steel, and digital printing coexist as hosts to a gamut of subjects. They touch upon love and the spiritual, from sex to fantasy and from personal history to celebrity. The big themes are grounded and made more human, while those considered trivial reach towards the eternal.

The representation of human form—in image and space—has been an ongoing quest of artists since the beginning. Scherer absorbs these traveled roads from tribal iconography to Meissen porcelain and Western contemporary art to create sculptures that are uncanny and transformative. Our ability to connect the popular and the art historical is elevated and energized: the Ancient Greek meets late 20th-century Finish Fetish, Charles Ray mates with vernacular art and emojis, the digital produced with Rodin’s modernism. What keeps the work current within the tried tradition of figurative sculpture is this ease of mixing tropes and styles. Scherer combines simple gestures with labored and highly detailed models that he creates using a variety of different tools. From the immediacy of basic iPhone drag and drop apps to state of the art computer software and manufacturing processes, his art is enabled by the technology of today, yet touches upon the universal. What’s connecting the works presented here are the little love stories that each one tells. Realism is a means to an end and figures often exist outside their original scale or color. Nature is bent here to enable a wider range of emotion.

In Scherer’s expansion of sculptural language, one is confronted with the merging of figure and fiction. Each work—rather than a character, an individual, or a type—constitutes a moment in a story, or a particular emotion frozen in space. The uncanniness of art that flirts with the real, brushing up against the warmth of a gentle gesture in absence. The cat is being pet, the boy gathers flowers for a loved one, and the large female figure is ensconced by floating hearts. Scherer uses the physical world to create constellations of events and unknown stories in static wonder.

Even when the subjects are recognizable (Scherer’s work has always had a deep interest in the horrors and humors of contemporary celebrity culture), society has already reduced them to stereotypes. A French model popular at the turn of the millennium may be any idealized form. Collective fantasies are used to tell personal stories. Each character in the sculptural composition that makes up the individual work, can serve both as the alter ego of the artist and as an empty role that the viewer may step inside freely.

In equal measure across media, the pieces presented here examine how we interact with each other and how we view ourselves within others. The basic blocks of naive figuration and private life stories compete against celebrity and the spectacle. There is an evolution and display of emotional life: the works may hold poignancy but, more so, moments of wonder, joy, and love. Scherer’s reality is very much like our own, only skewed towards faithfulness as it warps, dreams, and engages.

Yves Scherer was born in 1987 in Solothurn, CH, and lives and works in New York, NY, US. He holds an MA in Sculpture from The Royal College of Art, London, UK, and has been the subject of solo exhibitions at the Swiss Institute, New York, NY, US (2015); Kunstverein Wiesen, Wiesen, DE (2019); and, most recently, at Kunsthaus Grenchen, Grenchen, CH (2020). Other institutional presentations include the Institute of Contemporary Arts, London, UK; Futura, Prague, CZ; Grand Palais, Paris, FR; Kunsthalle Basel, Basel, CH; and Basement Roma, Rome, IT. In 2015, Scherer was the recipient of a Swiss Art Award.