A year ago, we all knew that we are all connected, and holding close to that belief in connectedness would be the place from which we take a deep breath and try to proceed or try to move forward.
Lorna Simpson, May 2020 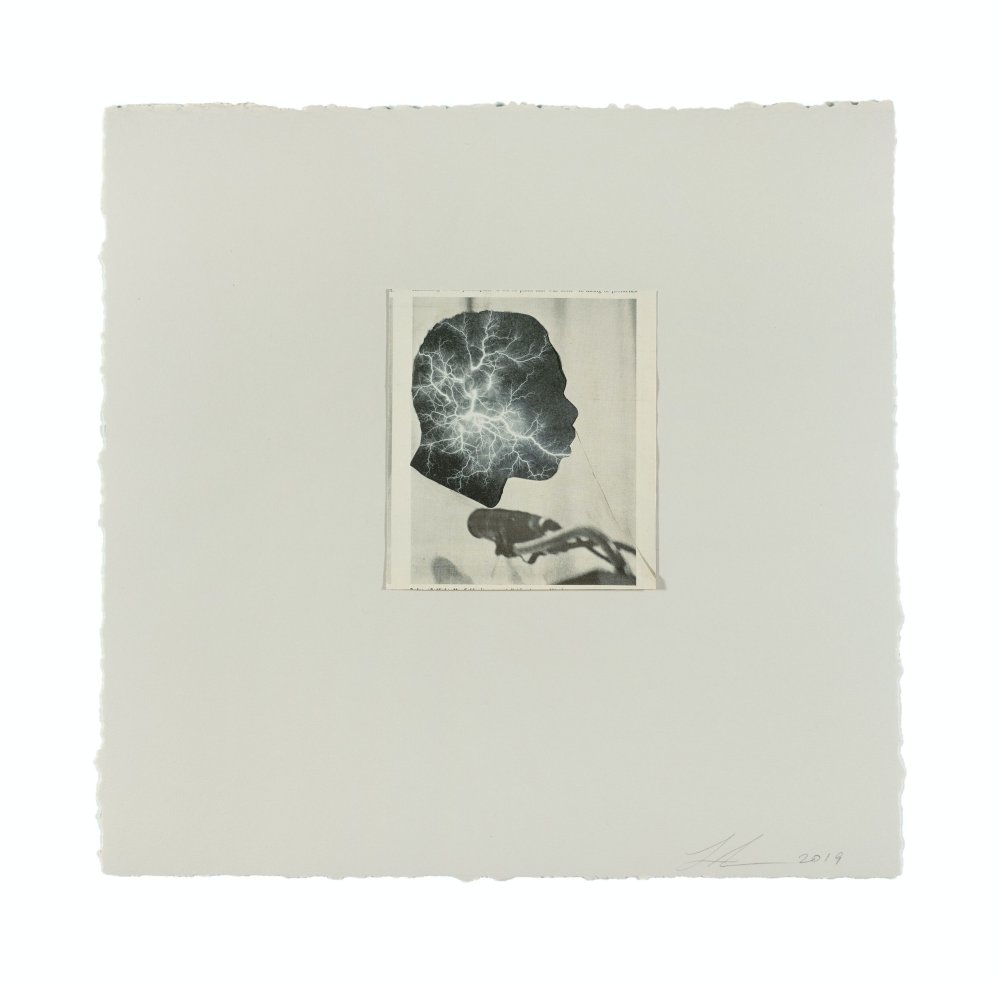 The exhibition features new works from the artist’s Special Characters series, alongside a selection of her recent paintings and photographic collages. In addition to building upon themes that are essential to her practice, including the nature of representation, identity, gender, and race, Simpson incorporates imagery of the natural world, universal elements that transcend human presence. By repurposing and reconfiguring found images – a signature source in her work – Simpson creates her own highly distinctive visual terrain that offers a potent response to American life today.

The exhibition’s focal point are works from Simpson’s ongoing Special Character series, which she first unveiled in 2019. Superimposing women’s faces from fashion and wig ads found in the pages of Ebony magazine, the paintings reveal through repetition the reinforcement of stereotypes in the everyday imagery we consume. In ‘Bright’ (2020) and ‘Most relevant’ (2020), vibrant shades of yellow and green wash over women’s faces whose layered gazes meet the viewer’s in uncanny, dreamlike portraits. Evocative of night, the title ‘Constellation’ link psychological and natural phenomena with images from mass culture, liberating the subject from its history by placing it in this new, otherworldly context.

Each striking portrayal has an unremitting gaze, exuding a power in looking, in visibility, and in representation, while a framing device alludes to film stills or negatives. Both boldly present and partially obscured, the duality in these spliced personas implies a disconnection between their physical appearance and their inner psyche. As Simpson elaborates, ‘They are surreal portraits in a way. For me, the photo collages are a surreal, very simple, exploration of my subconscious over the course of time.’

Simpson’s work has evolved significantly over the course of three decades. Her recent large-scale paintings demonstrate a mastery of paint and exemplify her radical blurring of the traditional distinctions between genres through a collision of the figurative and the abstract. Imagery of natural elements in relation to the human figure have long been a wellspring of inspiration for Simpson. Equally arresting and poetic, the paintings feature hazy washes of ink and acrylic over gesso, capturing the mystifying allure of an imaginary arctic landscape. Barely discernible strips of newsprint typography are deliberately interspersed throughout the canvases. Contributing to an atmosphere of bristling movement, the opacity and translucency of the ink is suggestive of the material properties of ice itself.

For the paintings in the exhibition, Simpson focuses on the motif of a solitary iceberg at the center of the composition. On the incorporation of arctic scenes in her work, Simpson has said that they are a meditation on and ‘a preoccupation with an environment that is historically inhospitable, with very dire rules for survival.’ Icebergs are continually shifting and unstable yet also endure, perhaps implying the transience of human presence in relation to the natural world. Here, as elsewhere, Simpson is sparing with color; her disciplined palette is dominated by hues of blue, a color which has both a wider symbolic, and a personal, significance for the artist.

On view are also a selection of the artist’s exquisite and thought-provoking photographic collages, in which she continues to develop the language of the found image as a source for her work. Simpson’s works entangle viewers in an equivocal web of meaning through the surreal properties of the collage medium. Imagery is cut from Jet and Ebony magazines dating from the 1950s to the 1970s. ‘The Jet and Ebony magazines are of course, as an American, on the East Coast, really familiar to me,’ Simpson explains. ‘They document African American thought and point of view over a series of decades. That’s been a really fertile ground for me to play with in terms of the work, an interesting marker of time and politics.’

The recent collages, ‘Nebulae Fig. 85’ (2019) ‘Synapse’ (2019) and ‘Then Comes Thunder’ (2019), feature imagery of natural phenomena from a text book called ‘Earth & Sky’, first published in 1931. Through layering and collage, Simpson reconfigures imagery of the female and male protagonists, often the focal point of the compositions, by splicing them with elements such as lightning, crystalline structures of the earth, and the cosmos. Displayed as singular works, in pairs and small groupings, fragmented narratives emerge suggesting our relationship with forces that we are all subject to, and that connect us to the universe. In works ‘Sky’ (2019), ‘Rooftop’ (2019), ‘Sound Variations’ (2019), and ‘Los Angeles’ (2019), Simpson uses dramatic cropping, distortions of scale and aerial viewpoints to create settings for the human figures. These unexpected contexts exemplify the surreal world conjured in Simpson’s practice.

‘Special Characters’ is Simpson’s fourth solo exhibition with Hauser & Wirth, following the latest online exhibition ‘Give Me Some Moments’, in which she debuted the collages she has created during quarantine; her critically acclaimed 2019 New York solo exhibition ‘Darkening’; and her inaugural show ‘Unanswerable’ in London in 2018.