Pippy Houldsworth Gallery presents Lines of Thought, an exhibition exploring the poetics and politics of language, mark-making, and seriality. The exhibition includes works by artists of different generations – Kenturah Davis and Mary Kelly, as well as Agnes Martin whose practice has been an inspiration to both. 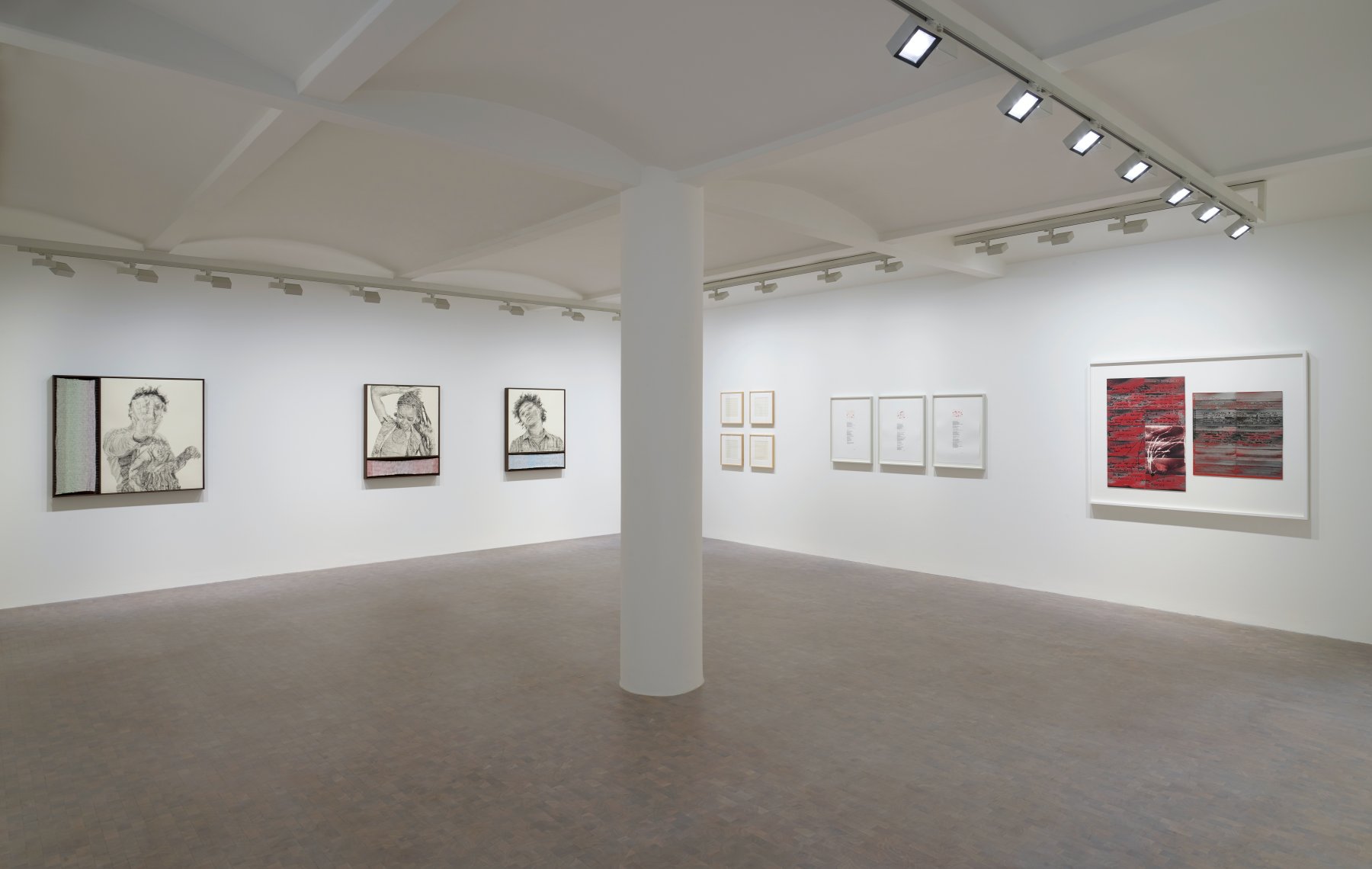 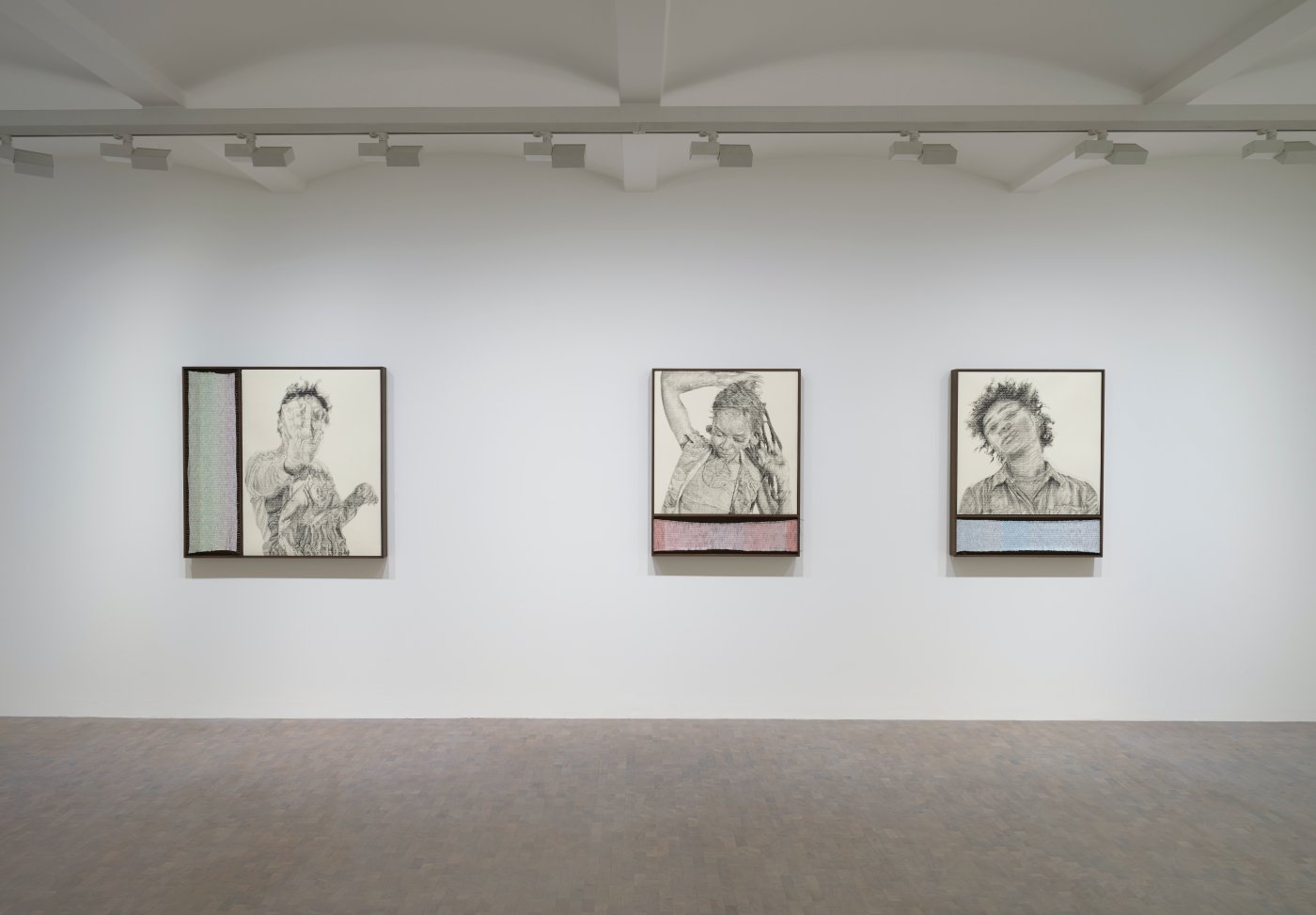 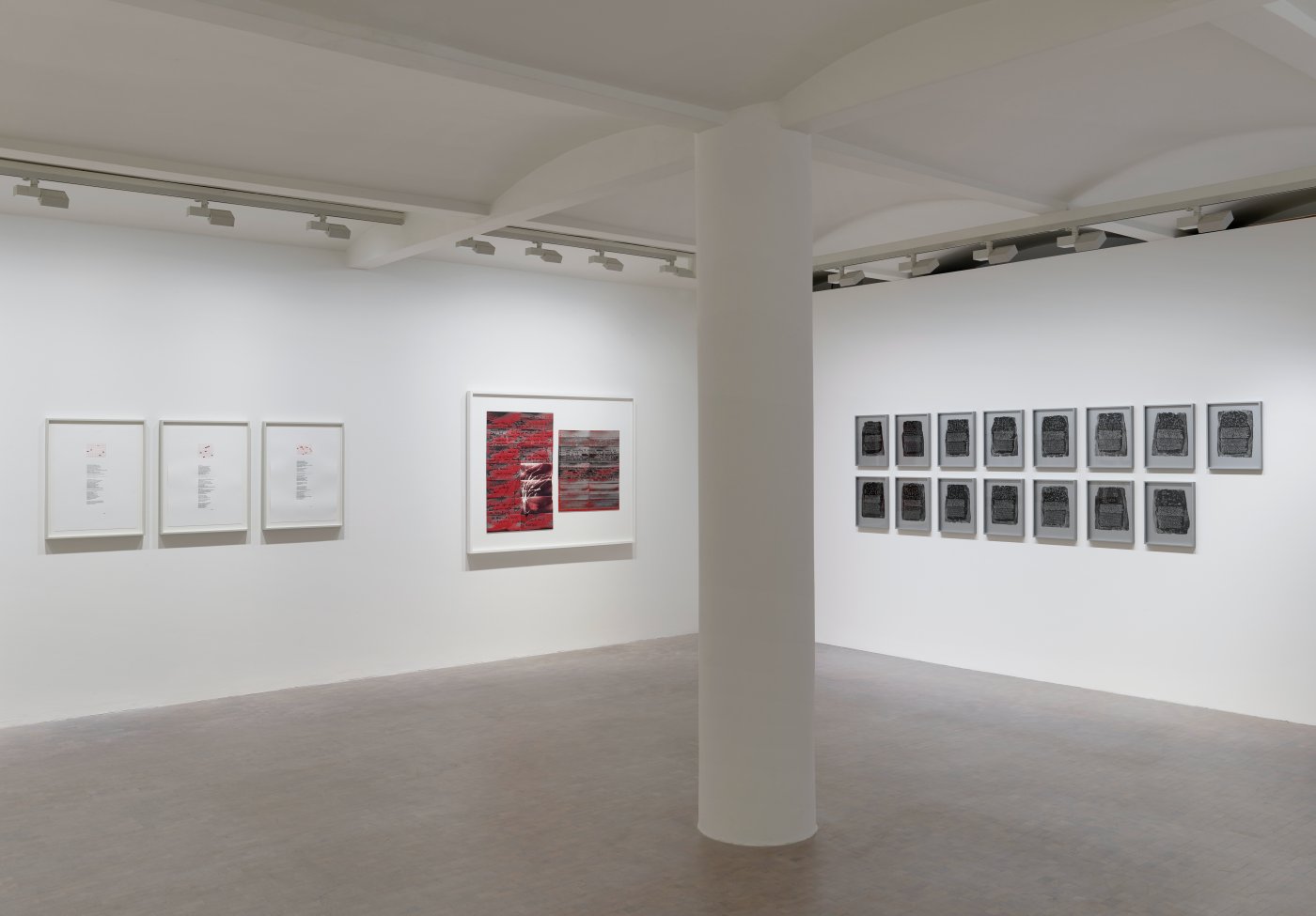 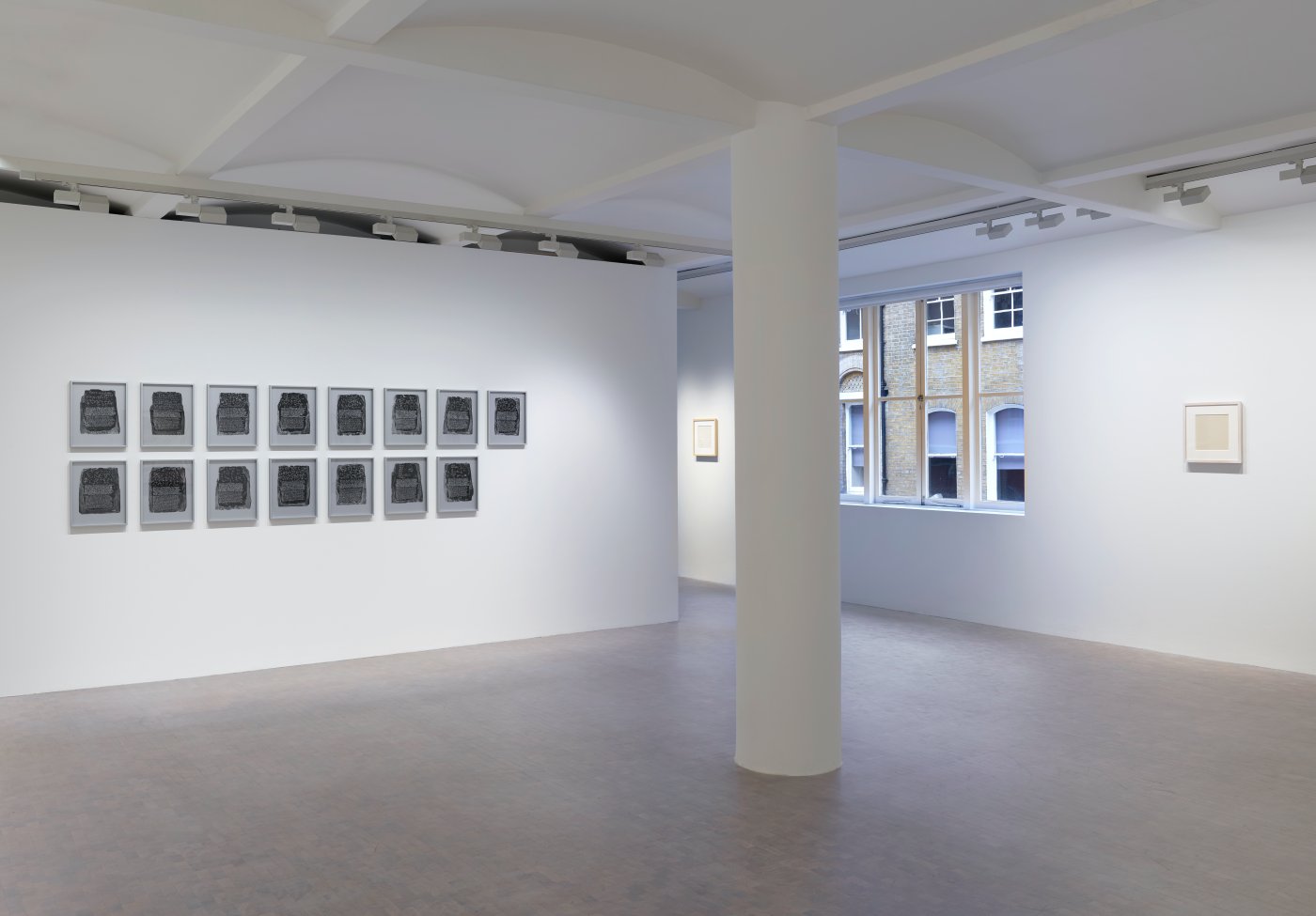 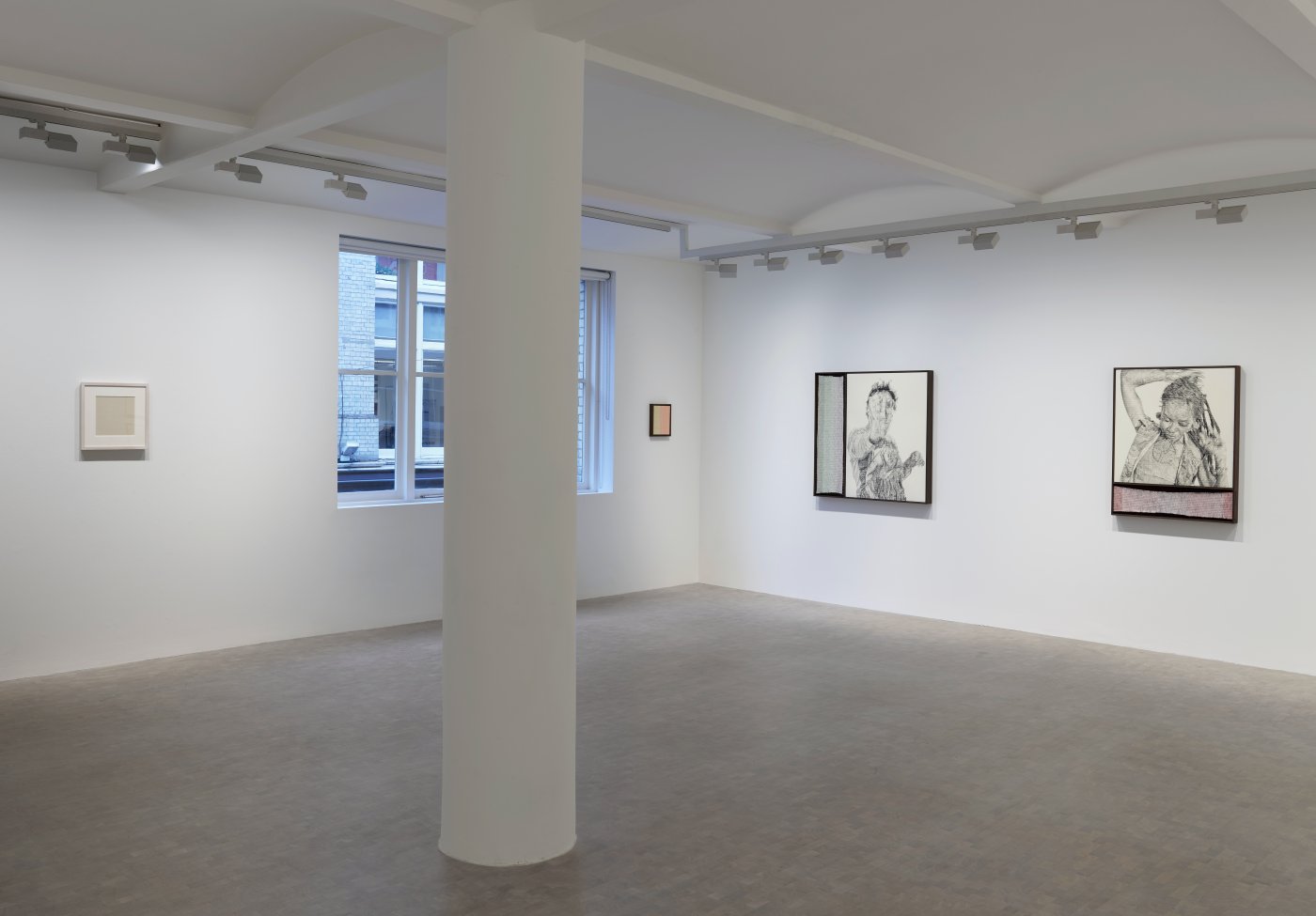 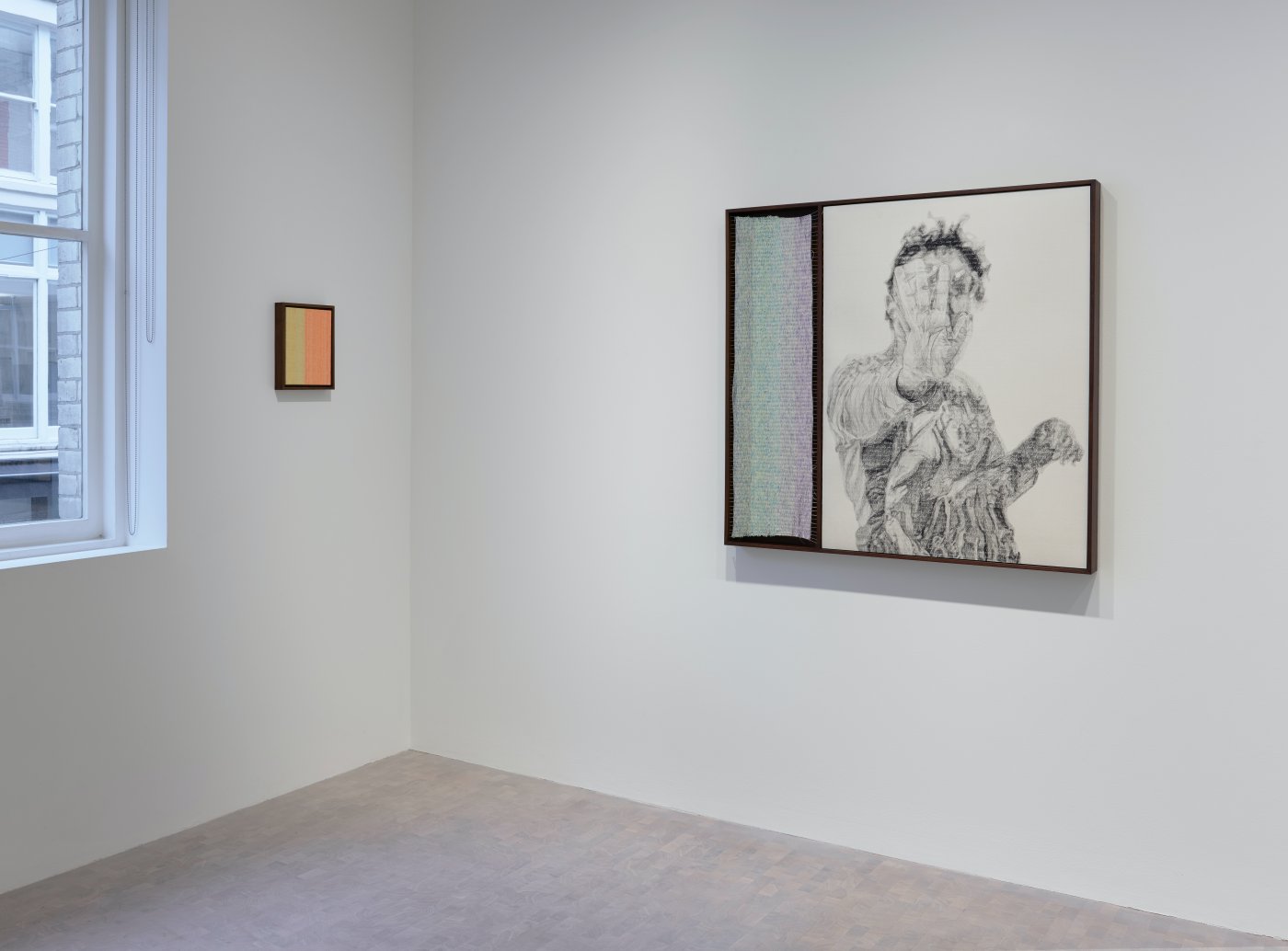 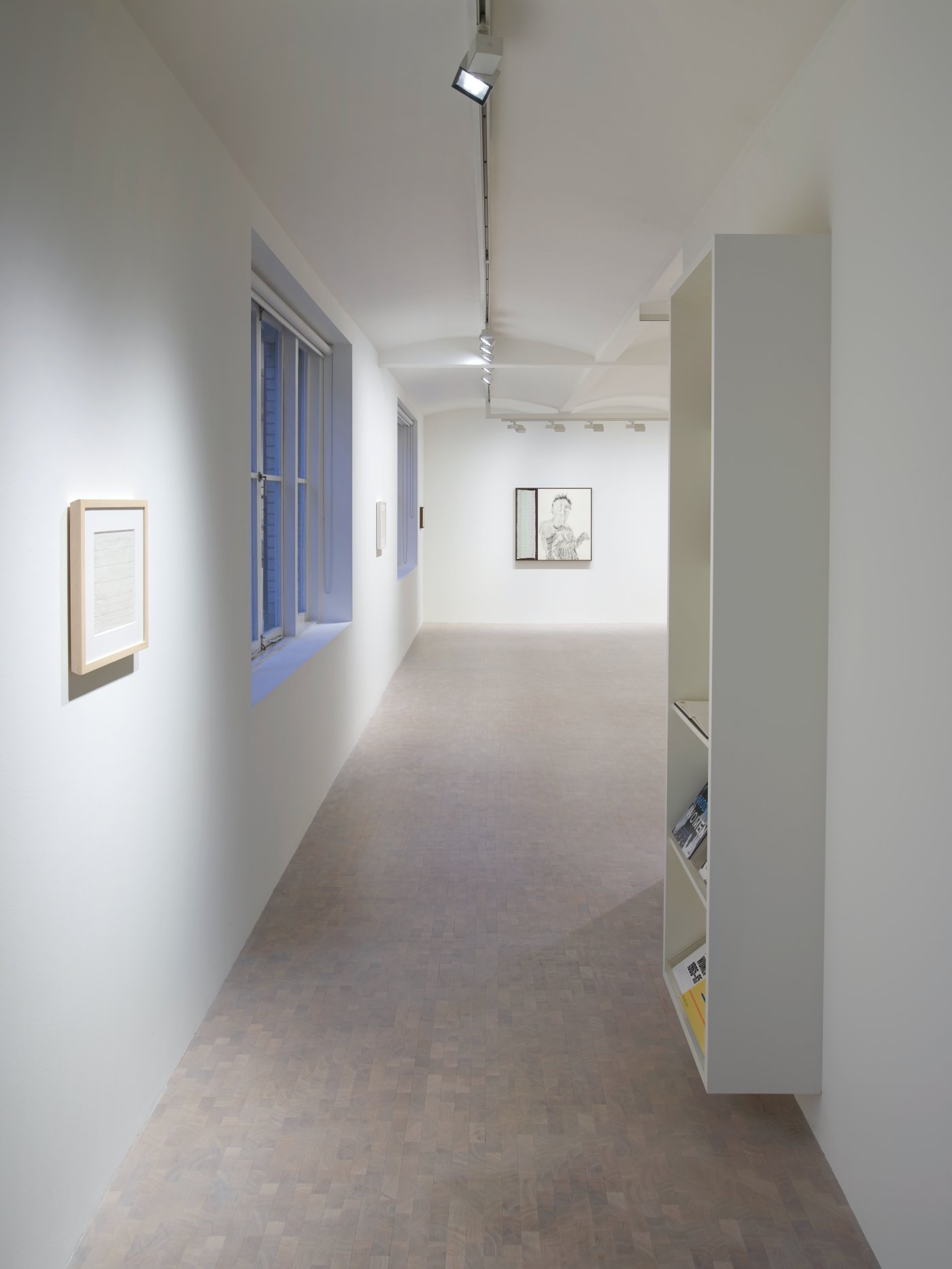 Central to these works is the form of the grid: simultaneously constricting and liberating, this framework functions as a tool to approach ambiguous concepts of identity, memory, and emotion. Lines of Thought is the first UK presentation of work by LA-based artist, Kenturah Davis.

Kenturah Davis considers how language shapes our perception of ourselves and the world around us. Addressing the representation of black bodies, her portraits, composed of text, express how individuals are inseparable from the ideas and language that shape identity. The exhibition includes new work from Limen, a series pairing portraiture with abstract textiles to explore ideas at the boundary of perception – a space that language is inadequate to describe. Each portrait is formed by rubbing pencil across paper that has been embossed and inscribed with handwritten text – a meticulous process that belies the indeterminate quality of the resulting image. As the figure emerges, areas of script become legible by virtue of shadow and the darkness of the ground, whilst others remain hidden. Juxtaposed is a textile woven from the same handwritten script on paper, transformed into thread by means of the Japanese technique shifu. Drawing on the etymological link between text and textile, the fibre hints at the information encoded within only through tiny flecks of ink. Davis incorporates writings on subjects such as shadows, black-holes, time-travel, and non-Western proverbs and philosophies, drawing on leading African-American scholars, from Fred Moten to Jedidah Isler, as well as personal writings. Through concealment and illumination, these works complicate binary categories of black and white, light and dark, East and West, pointing to liminal spaces where seeming contradictions meet.

An installation by Mary Kelly of unique silver autone prints – made in the 1980s and seen for the first time – converses with Davis’ conception of the individual as a container of information, absorbed, in part, by through participation in language. Comprising fifteen units, the work responds to the final section of Kelly’s Post-Partum Document installation (1973-79), demonstrating how the acquisition of gendered roles and identity is inherent in the acquisition of language. Reproducing her son’s early experience of writing, Kelly explores the importance of repetition in the development of language and meaning. Also on view is work from Kelly’s News From Home series which presents the lived experience of feminists in the 1970s. London, 1974 (2017) transposes private, handwritten correspondence into gridded panels, addressing the experience of motherhood and communal living. Kelly’s unique lint medium – the domestic residue of the tumble-dryer – partly obscures the authors’ script, as in Davis’ work, expressing a clouded, yet affective relationship with an historic moment. The work’s materiality speaks to that of Davis’ weavings, forming a dialogue on our fragile comprehension of formative events and social structures.

The grid-like arrangements of Agnes Martin’s works on paper echo throughout the exhibition, from the structure of Davis’ weavings to rectilinear composition of Kelly’s works. On show is a unique drawing from Martin’s late career, Untitled (1995), composed of hand drawn pencil lines, delineated at regular intervals with alternating pressure and tone. As described by Nancy Princenthal, the ‘connection between Martin’s creative process and earlier literary as well as visual stream-of-consciousness production helps us see, as well, that the hand drawn lines in her paintings are tied to handwriting and to verbal language. The grids and later works do not so much represent conditions in the material world – light, shape, form – as states of mind, or more precisely, lines of thought’. Alongside are works from the artist’s only major printing project, On a clear day (1973). This body of work marks a critical point in the Martin’s career, initiating a return to painting after a self-imposed period without artmaking. Composed of thirty screen-prints, On a clear day presents unique monochrome iterations of line and space, exploring the expressive possibilities of the grid and the potential of seriality to generate meaning.

Courtesy of the artists and Pippy Houldsworth Gallery, London