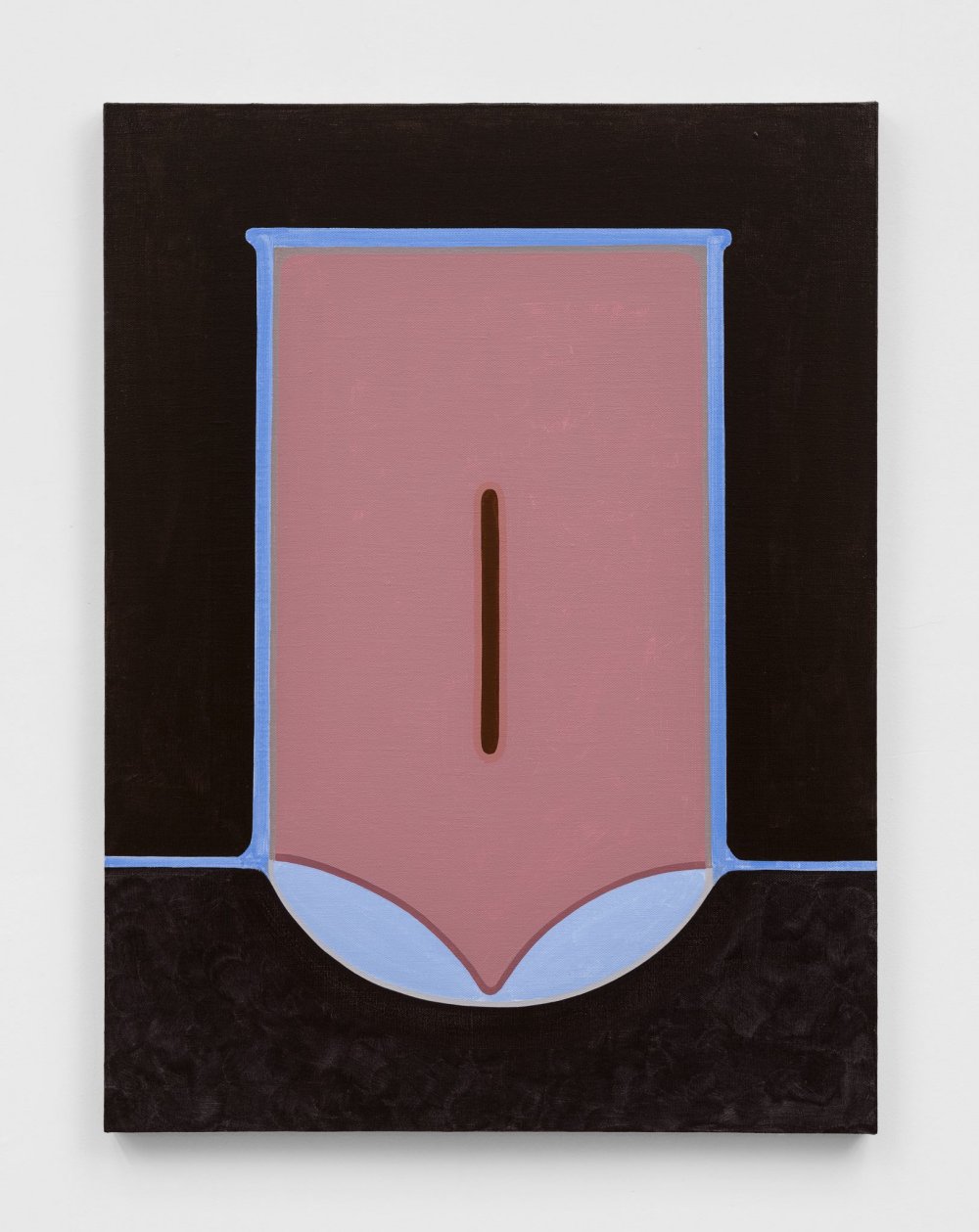 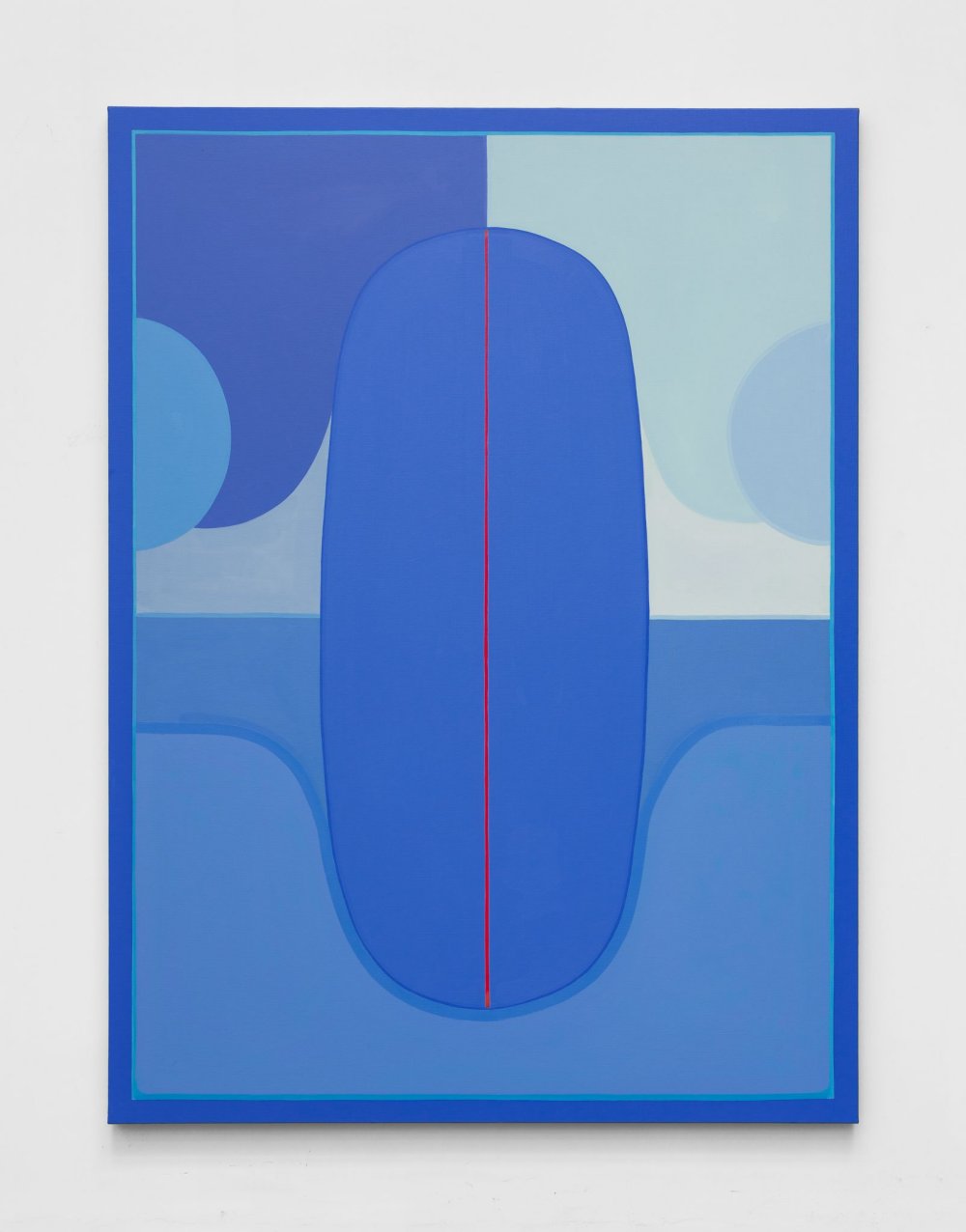 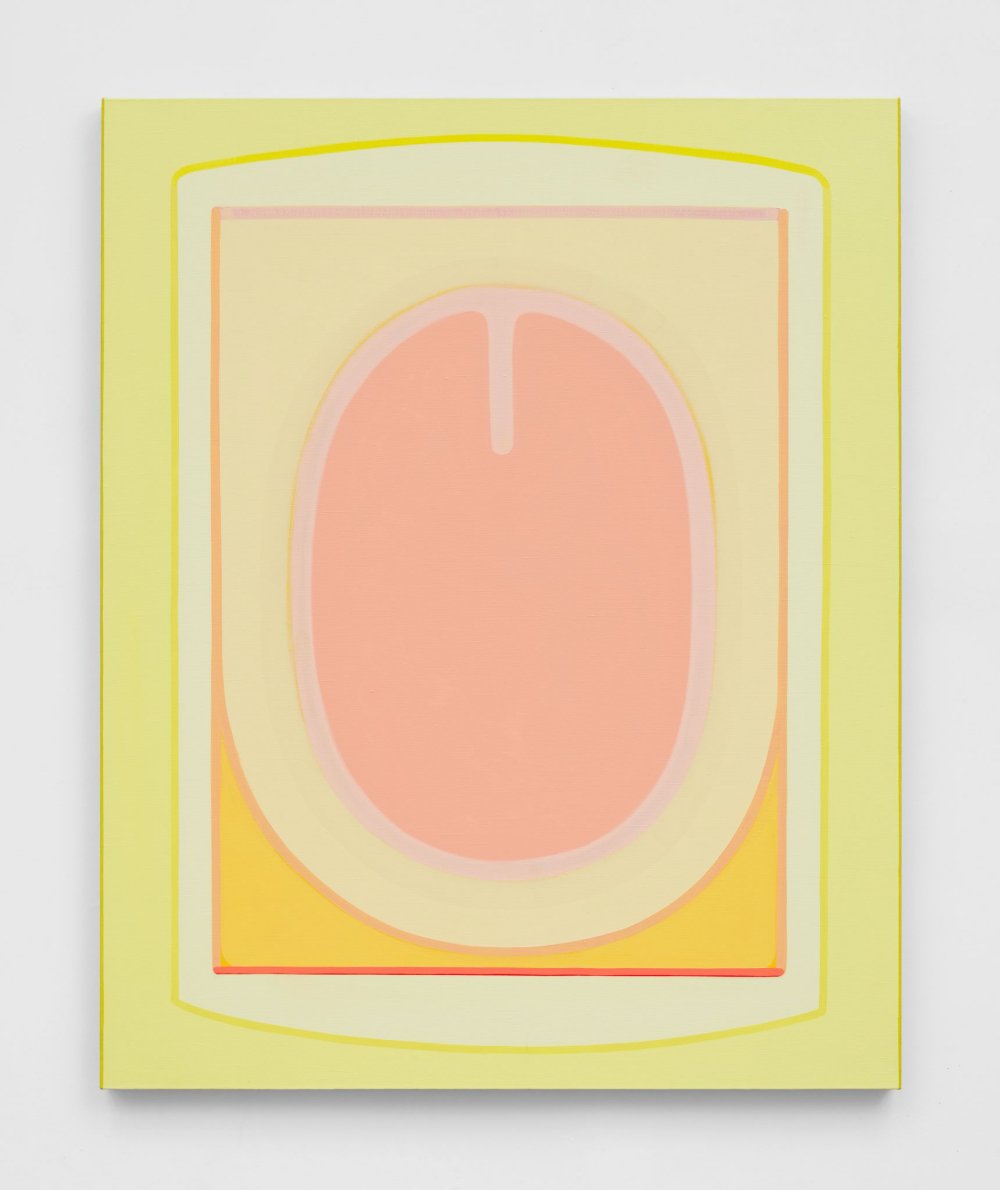 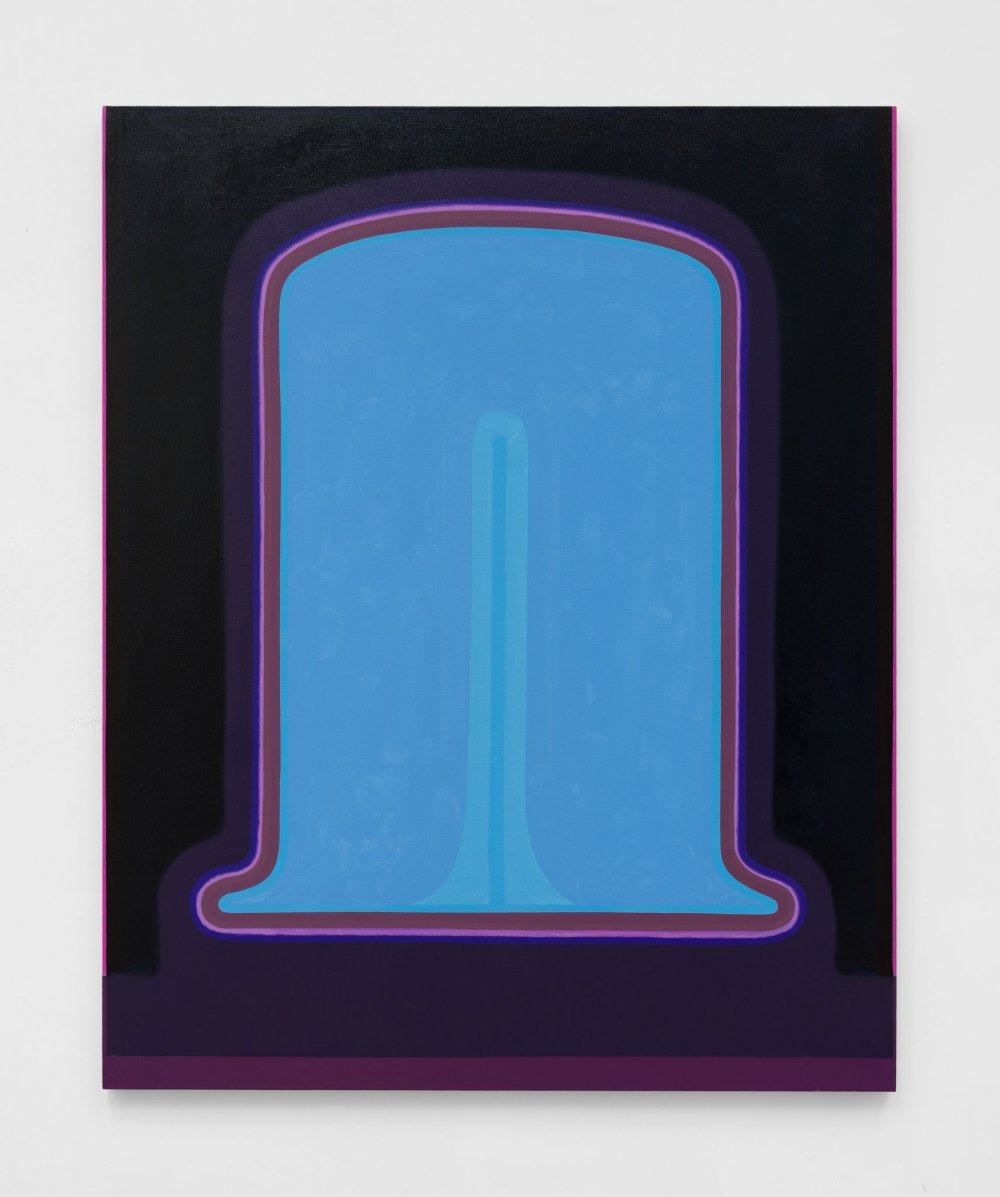 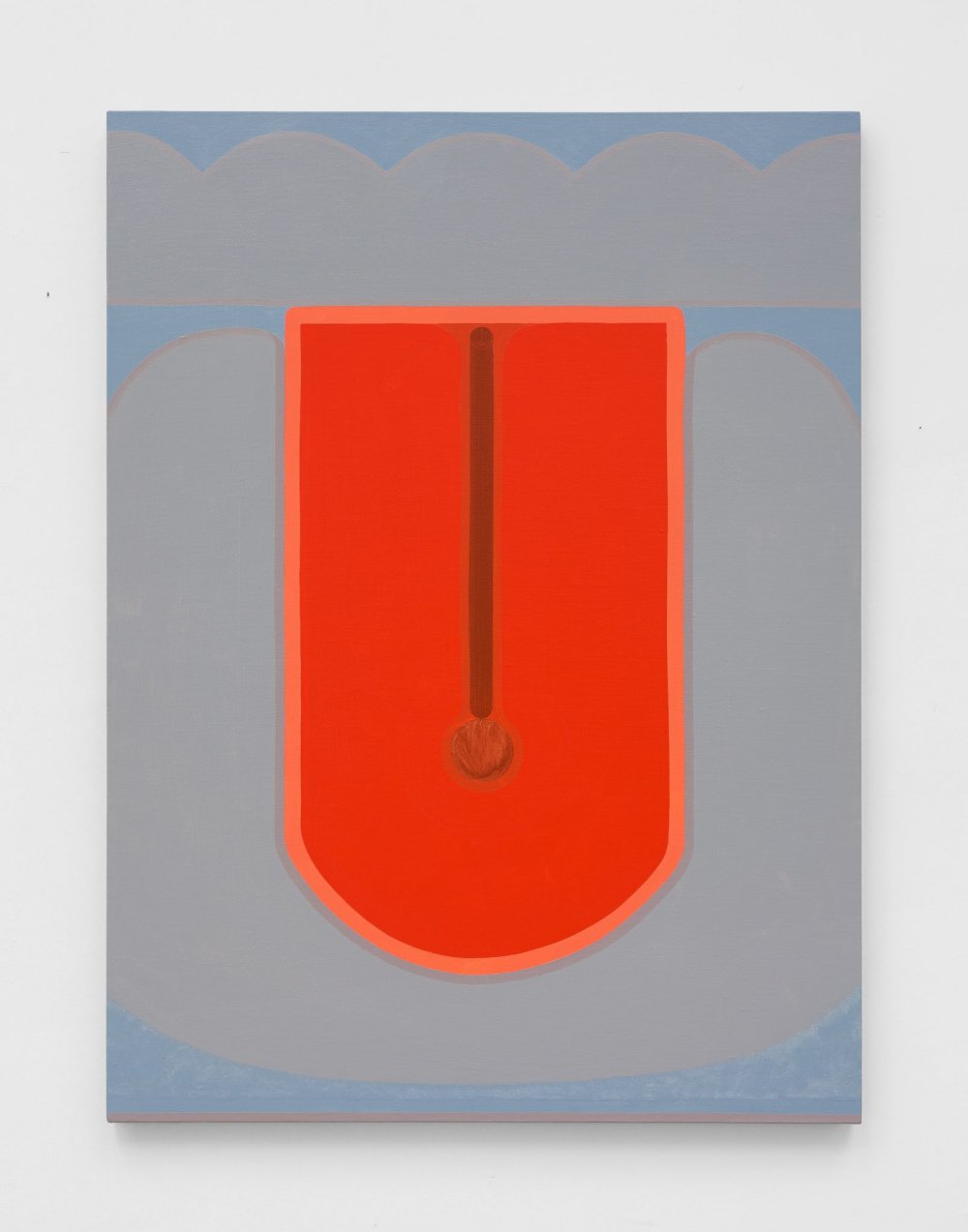 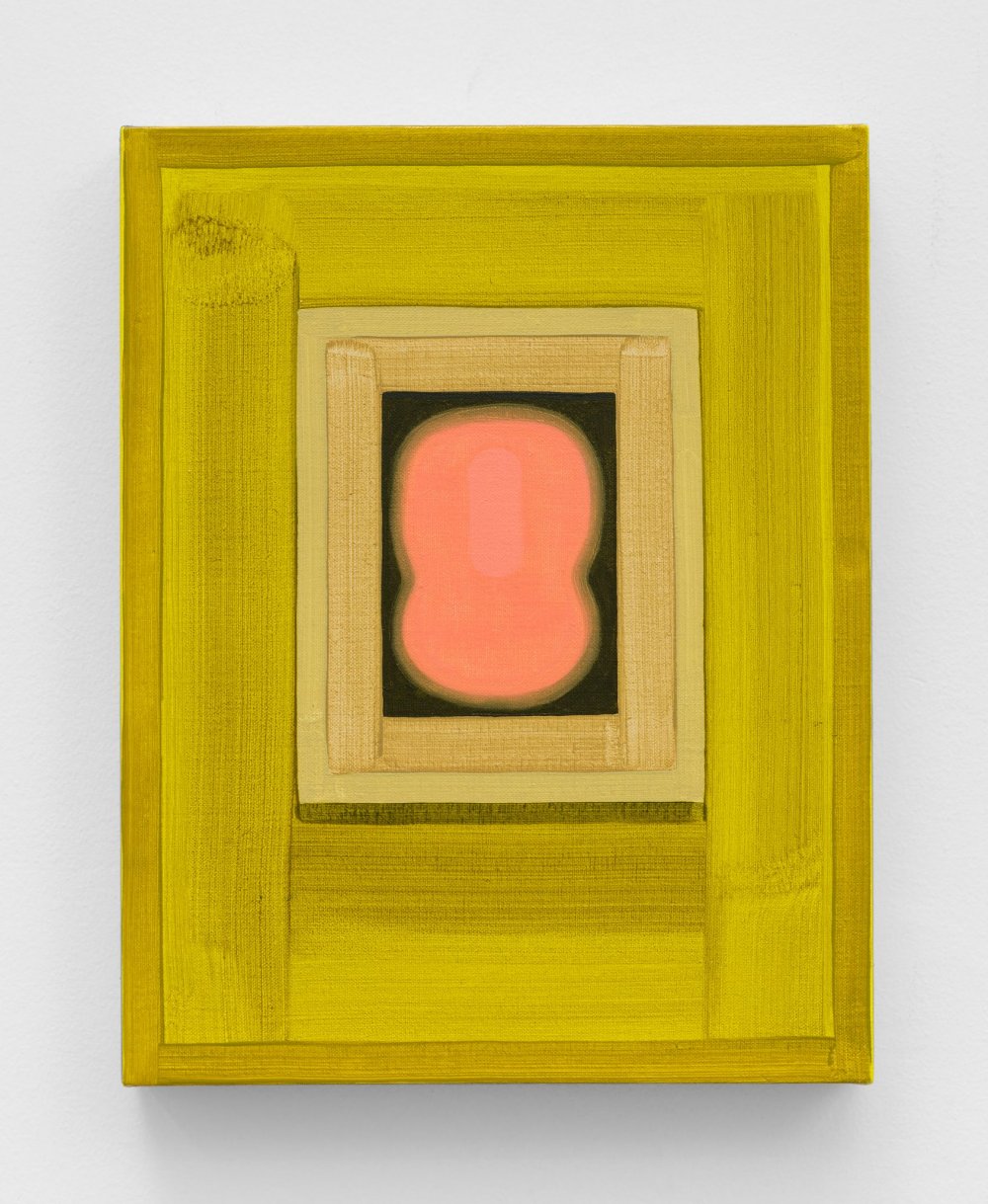 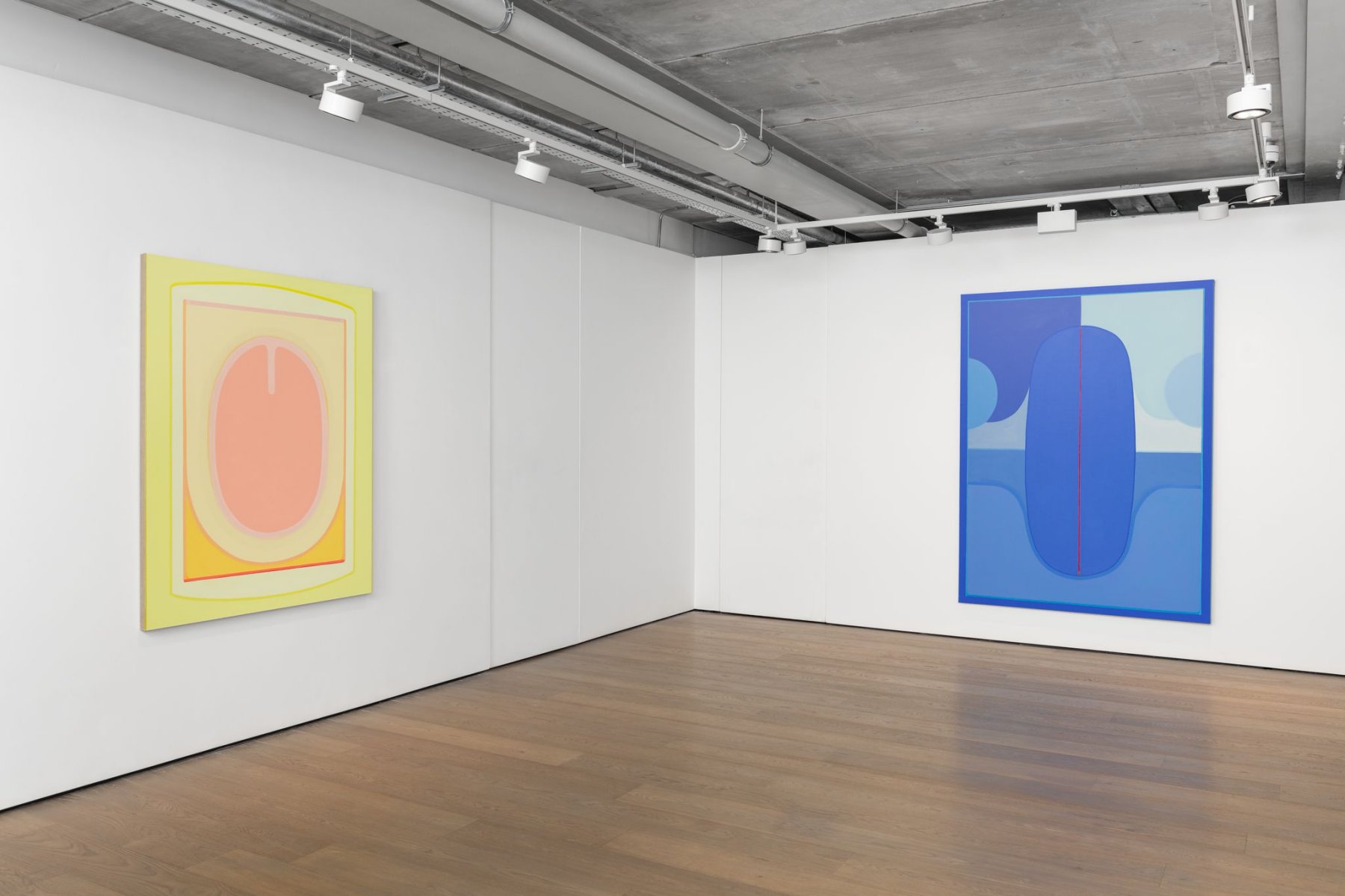 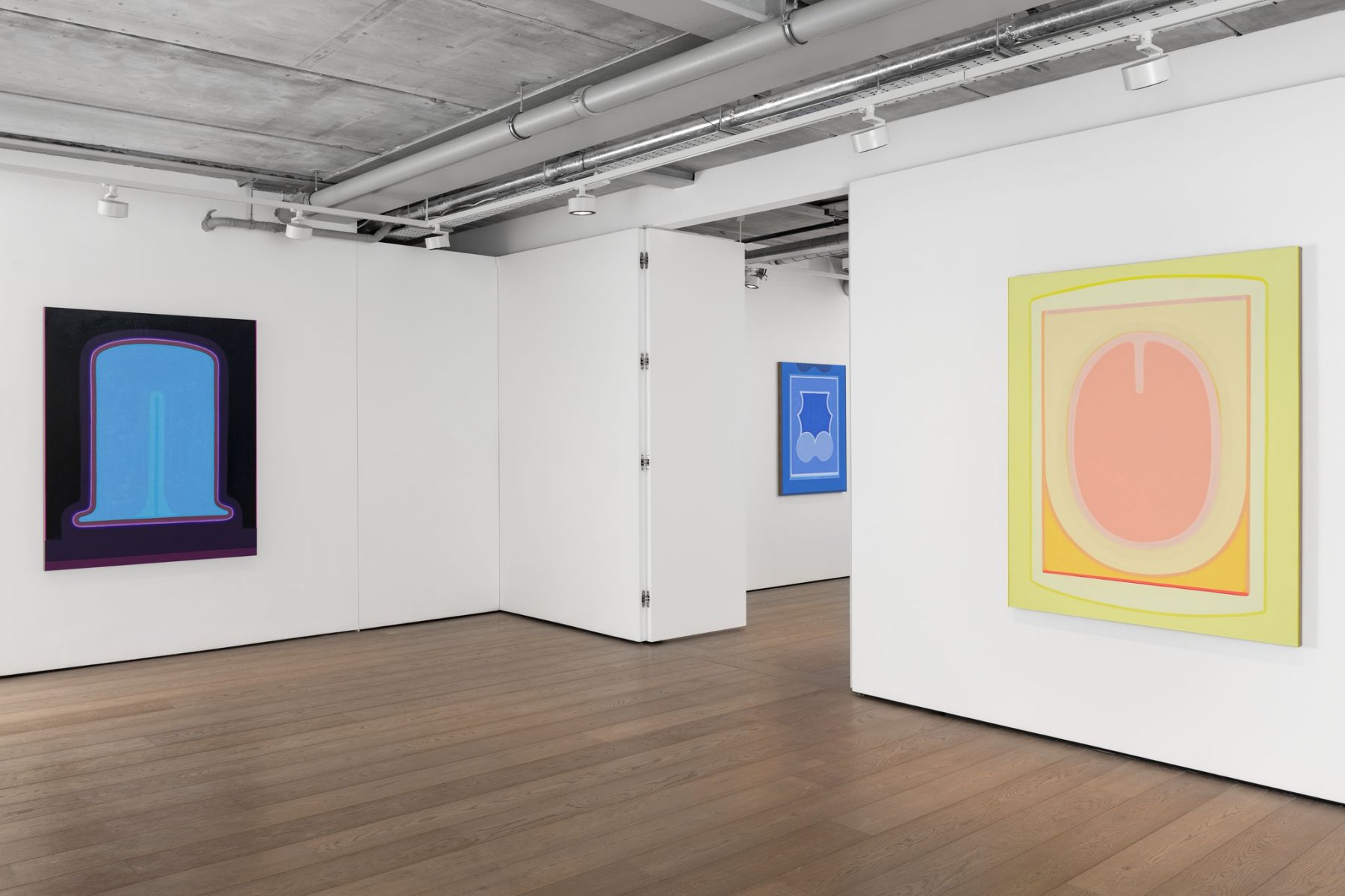 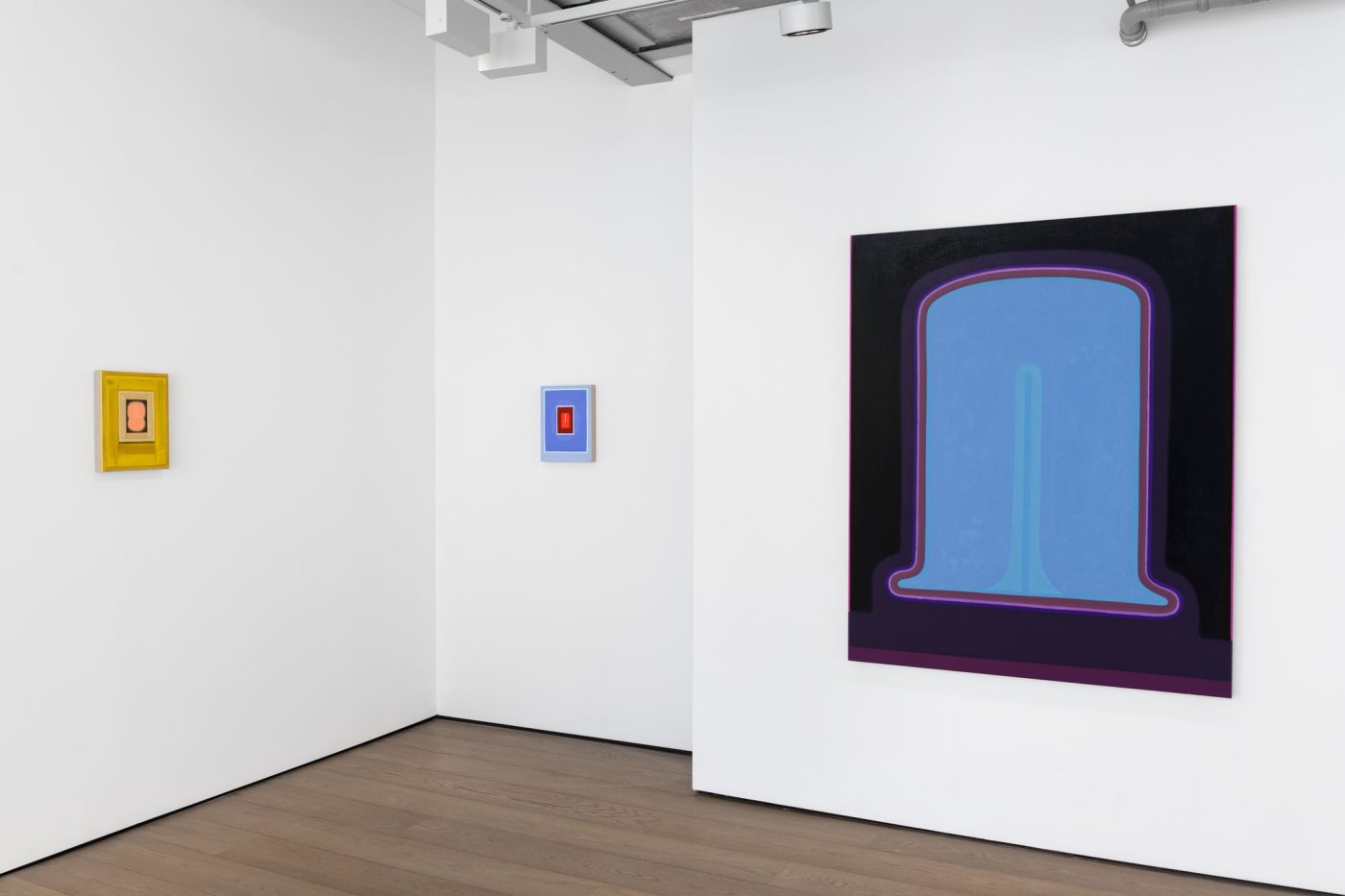 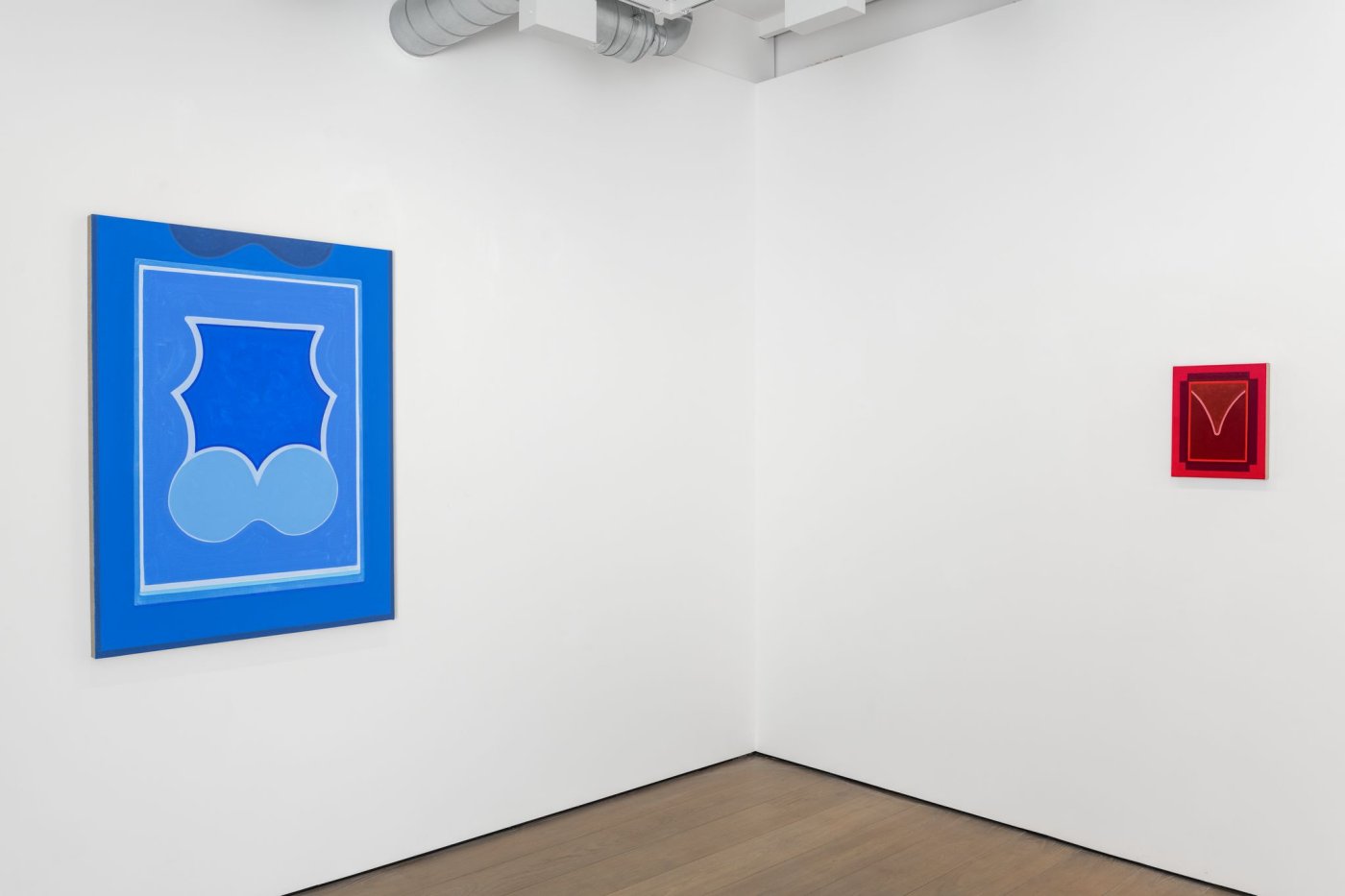 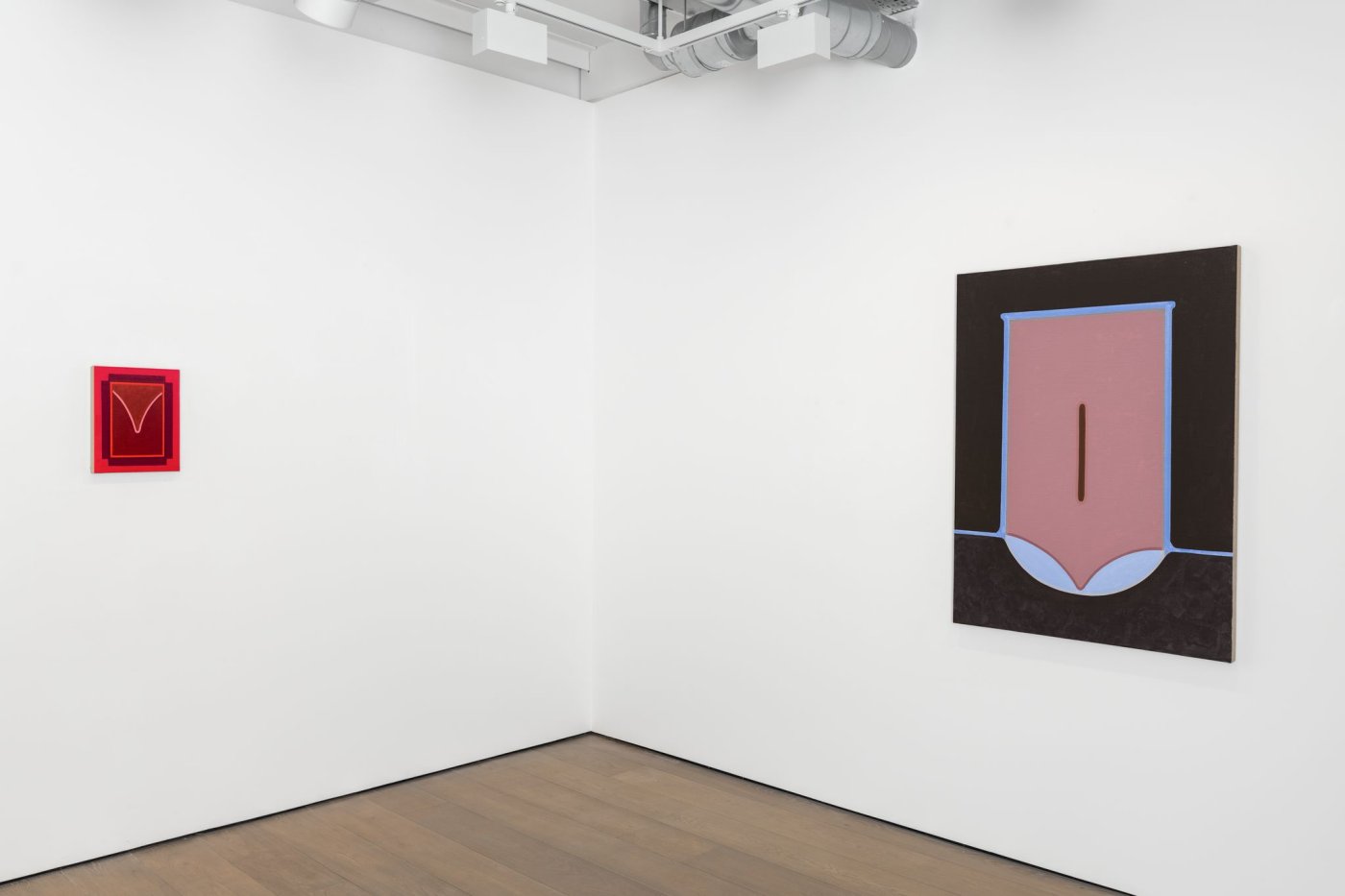 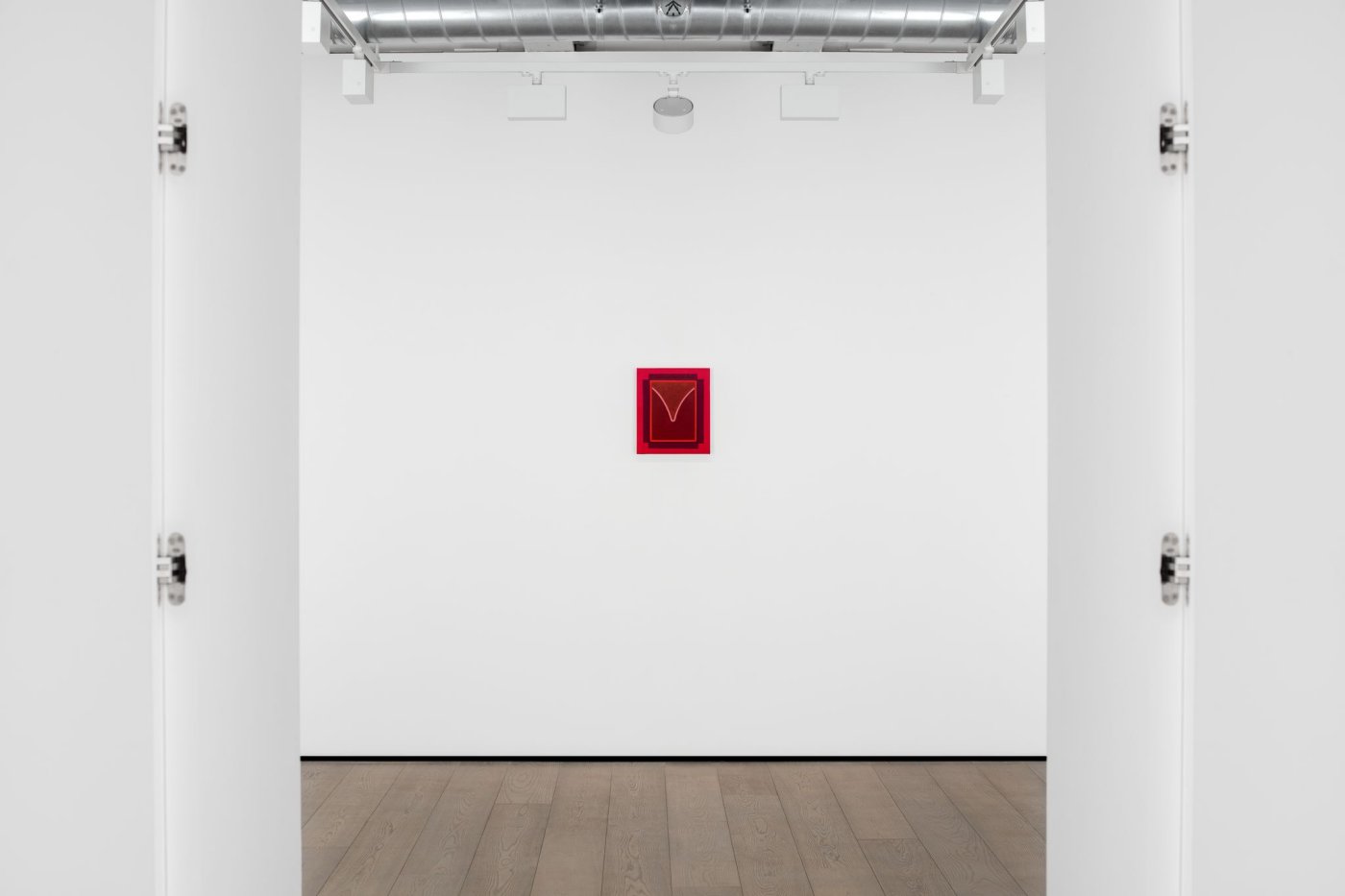 Somewhere along the vertical axis of most of Lily Stockman’s paintings lies the suggestion of a dividing line, if not some length of a line itself. This makes a painting’s two sides roughly symmetrical. Look, for instance, at the mottled chartreuse patch left by the spring of a lifted brush at one top corner of Planting Out (all works 2022) compared to the smooth sweeping stroke on the other side. Some lines wobble; others crook slightly, like the crimson interior frame of Mouth of Burns Canyon. These are the variations that undergird nature’s geometries as well as anything made by human hands. No leaf is perfectly symmetrical. Fold one and see. We are left to ask: is Stockman’s hermeneutic one of doubling (two things likened for similarity) or of opposition (two things likened for contrast)? Or, perhaps it is something different altogether that opens onto her oeuvre as a whole—something that eschews the binary logic of opposition and models the capacity to hold together difference. Something that, in acknowledging this difference, allows us to linger in a place of wonder, the way we might at the sight of frozen tendrils reaching over a lake’s surface or the camouflage of a caterpillar against a stem. This place of wonder is Stockman’s A Green Place, a title taken from the journal of Derek Jarman, who let sea kale and lavender cotton thrive where the biting winds swept their seeds, forging a boundaryless garden on the Dungeness coast.

In the 13 paintings on view in A Green Place, Stockman maintains the logic of a central motif that has guided her work for the entirety of her practice, most frequently as an upside-down U shape closing in on itself to varying degrees. Here, that family of forms has morphed into a gently-arcing V, a bisected oval alongside a single torqued peak, a cobalt field into which peripheral orbs bulge above two aureolae, or constellations of small circles. For the first time, Stockman paints canvases that exceed her own wingspan, such as the 84 by 62-inch Crossing. This transition to working large necessitates a reorganization of Stockman’s body in relation to the canvas laid across sawhorses in her studio. It also underscores the range of responses differently sized paintings engender: the larger work suggests shared architectural expanses, whereas the smallest ones, at 14 by 11 inches, read as intensely private devotionals. There are other shifts, too: the artist has replaced recent pastel-hued oils with a darker palette, suspending her practice of mixing in white. Brooding blacks mixed by combining Van Dyke brown and ultramarine blue or cobalt violet and burnt sienna are accented by territories of carnelian red. Diluted paint approaches translucency, causing a surface texture that Stockman embraces. Note the irregular pigment deposits from the brush’s uneven pressure or from the occasional quake of her hand.

As a result of these shifts, the paintings delineate internal elements more emphatically than ever before. The contrast between the wide black surround in CA-247 and the baby blue edges of its curve-bottomed rectangle, for instance, emphasize the blue edges over the mauve field they enclose. In this newfound clarity of delineated form we might see resonance with the hard edges of Los Angeles painter Frederick Hammersley, whose designation as an “abstract classicist” indicated his use of abstraction to crystallize intuitive experience and organize the disparate onrush of sensation in everyday life. From the other coast, Shaker gift drawings’ pressed-flower motifs offer a sympathetic model for the distillation of nature’s intricacies and hard-won physical work into crisp line.

In one sense, to delineate is to indicate through marked outline, a meaning with clear pertinence for Stockman. In a fuzzier sense, to delineate is to describe or portray. When we tell stories, sketch from memory, or pen a couplet, the relative precision of description to referent varies from near accuracy to almost total abstraction. Stockman probes the latter side of this spectrum by transfiguring intangible aspects of fleeting experience in the natural world. Watching the positive space of a butte’s shadow fit inside the negative space of a mesa below; speeding through a red canyon in transitional light; perceiving a wood thrush’s capacity to sing two notes at the same time. Stockman’s recommendation for what such sensations can look like in paint does not exclude a compensatory operation whereby the viewer finds in the paintings their own private experience, or anticipates those yet to be had.

And yet delineation begins to fade into inscription as we ponder Stockman’s borders and outlines, which index their own making through the trace of the brush. Inscription concerns how one makes a mark rather than its effect. Surely, this matters: black in one Stockman painting can be very far from black in another. In the small inky field of Last Ember, we see the gentle strokes of a small brush that glided right along the winding edges of its rumpled mustard-brown form. By contrast, in CA-247 the bottommost black area is textured with scratchy round passages from a brush pressed straight down onto the canvas repeatedly, like a stamp. How, indeed, does one make a mark—on canvas or in nature?

Michelle Stuart, known for large-scale artwork that records traces upon the earth, recently spoke of standing on the deck of a ship, watching it cut a wake that would inevitably disappear. “We all have left this mark around the world for centuries,” Stuart said,
“looking for something.” To paint, to plant, to travel—these speak to inscription as a temporal pursuit. Each takes time to make and leaves marks of varying longevity. Stockman’s paintings plumb what it means to experience life on a planet where time telescopes depending on one’s place in it and one’s frame of reference. The light of the farmer’s workday through the year; the future-oriented anticipation of a child impatient to grow up; the germination of a seed; a tree’s growth rings; or evidence of the long expanse of geologic time through fossilized imprints. Like information gained through translation or the heartbeat of iambic pentameter, Stockman’s inscriptions of experience in nature are precisely delineated and subjectively felt. They are open to reprise for as long as sunlight refracts through our atmosphere, capturing buoyancy, however paradoxically, through trace.