Light Years: The Photographers’ Gallery at 50

Light Years: The Photographers’ Gallery at 50 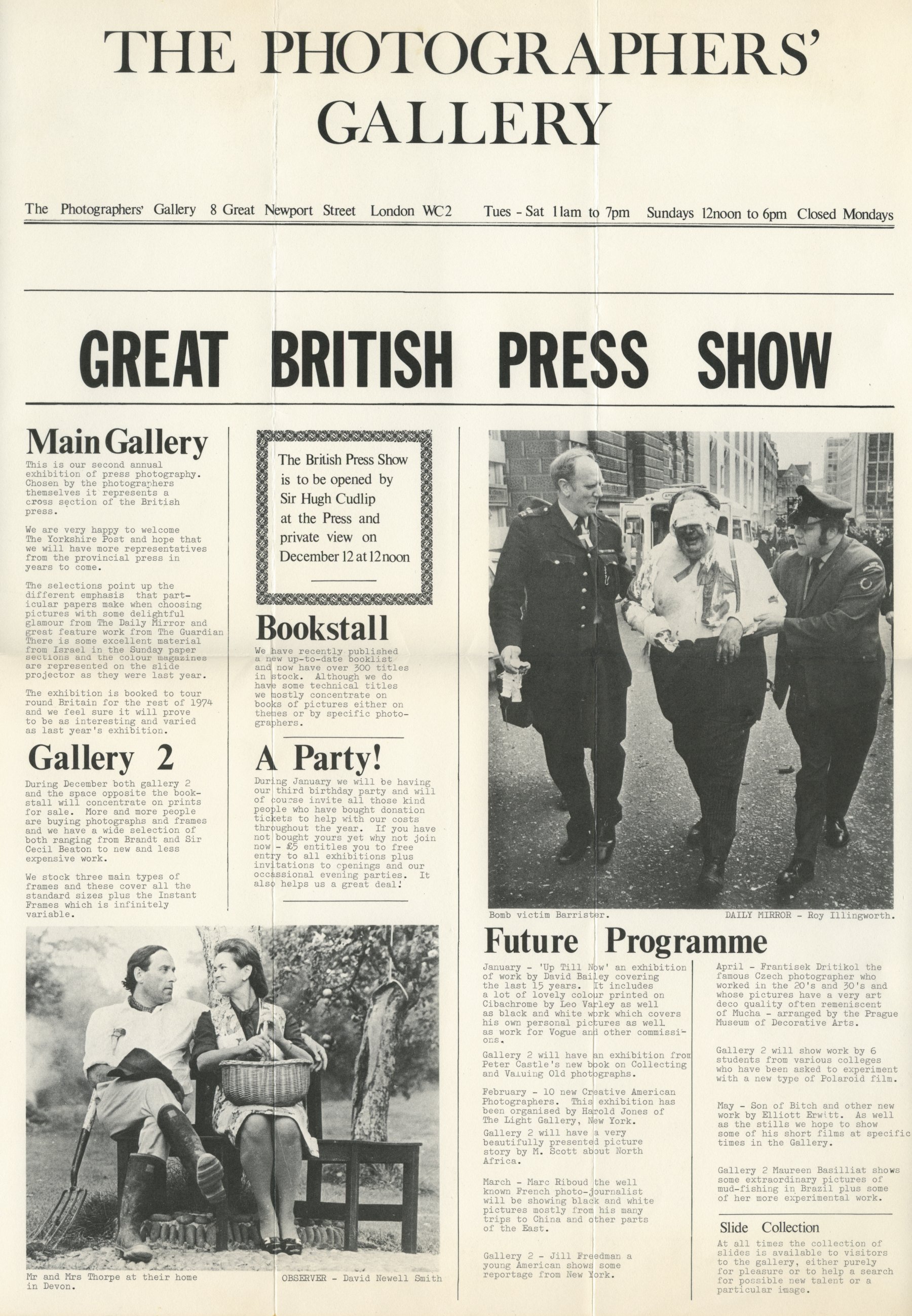 Arranged around four thematic displays each ‘chapter’ draws on rarely seen materials from the Gallery’s archive to explore key moments or movements in both the Gallery’s history and the Photography landscape more widely.

The Photographers’ Gallery was founded in London’s Covent Garden in 1971 by Sue Davies, OBE as the first publicly funded gallery in the UK dedicated to the exhibition, exploration, education and development of the photographic medium. From the outset it has been instrumental in promoting photography’s value to the wider world and ensuring its position as one of our most significant artforms.

Curated by writer, researcher, academic and broadcaster, David Brittain, Light Years draws on the Gallery’s rich exhibition programme as well as considering its legacy as an influential educational resource.

This display considers the Gallery’s beginnings and why ‘eyewitness’ photography was so central to the programme over the first decade. The gallery opened in January 1971 with a mission ‘to gain recognition for photography as an art form in its own right’. The inaugural exhibition, ‘The Concerned Photographer’, featured legends of photojournalism such as Andre Kertesz and the Magnum photographer Robert Capa. Curated by Cornell Capa, this show promoted the figure of the photojournalist-as-artist and anticipated the creation of the International Center of Photography in New York in 1973. It reflected a moment when television’s influence was overtaking the printed press as the main provider of news, but also indicated institutional support for TPG from key figures in fleet street such as Harold Evans, then Editor of the Sunday Times, who would also curate the group show ‘Scoop, Scandal and Strife: A History of Newspaper Photography’ in the Gallery’s first year, and legendary journalist Sir Tom Hopkinson. The Gallery found an important role as a showcase for self-initiated projects by British and international photographers such as Phillip Jones Griffiths (‘Vietnam Inc’, 1972), Jill Freeman (‘Pictures from New York’, 1974), Leonard Freed (‘Spectre of Violence’, 1973) and Colin Jones with ‘The Black House’ exhibition (1977).

Some felt that ‘commercial photography’ was less deserving of serious attention than was documentary photography, but Sue Davies was determined that TPG should represent the widest possible spectrum of the medium. During its first decade, the gallery had already included exhibitions with many well-established fashion and advertising photographers, including David Bailey who received a retrospective in January 1974. In the 1980s, when London again became associated with exciting new magazines, such as I-D and The Face, the gallery responded with a major exhibition called ‘Five Years with The Face’, 1985. It featured pictures by Anton Corbjin, Jill Furmanski, Sheila Rock and Robert Mapplethorpe, among others. The exhibition design and graphics were a collaboration with graphic designer Neville Brodie, and would provide an opportunity to affirm the key role magazines, graphic design and the printed page played in the dissemination and evolution of fashion and advertising photography. Other projects with artists whose work traversed the boundaries of ‘editorial’ and ‘art’ included ‘Brian Griffin: A Portrait of our Time’ (1978), ‘Out Of Fashion: Photographs by Nick Knight and Cindy Palmano’ (1989) as well as, latterly, ‘Fashion in the Mirror: Self Reflection in Fashion photography’ with Tim Walker, Nick Knight and Juergen Teller, Richard Avedon (2008). This section will also include a focus on the role photographic magazines have played, providing an important create exchange with institutions such as TPG, and another space for new and experimental photographic work to be disseminated.

Theme 3: ‘Beyond documentary: from photography to photographies’ (October – December 2021)

New artistic developments have been a mainstay of TPG’s exhibition programme, continuously testing the boundaries of photographic practice and the parameters of the medium. Moving away from ‘eye-witness’ photography and into something more subjective a seminal British showcase of ‘new documentary’ photography was the exhibition ‘New Work in Britain: Aspects of Photography in Britain Today’ (1981). It featured Martin Parr, David Chadwick and Tish Murtha whose preferred output was the portfolio or book, rather than the magazine page, and whose focus was on social documentary. Some photographers including Dave Lewis and Clement Cooper took themes from personal experience, devising their own methods and techniques. Another strand converged with contemporary art – both stylistically and thematically. Exhibitions could contain different producers (artists and photographers), mixed media, and themes were often critically-engaged. This became contested by a range of ‘postmodern’ photographers who acknowledged the many complex ways in which photography was implicated with power, politics and capital. This included work from diasporic artists such as Maud Sulter, Zarina Bhimji, Mona Hatoum, Sutupa Biswas, Ingrid Pollard (‘Intimate Distance: Five Female Artists’, 1989) who called attention to the lack of visibility of the ‘other’. Producers, such as Jo Spence, revived traditions and histories that were proscribed photography museums: such as the non-aesthetic practice of agitprop.

This section takes in five decades of exhibitions that examine links between technological and aesthetic innovation as well as vernacular and non-art image making. There have been exhibitions of scientific images and specialist techniques, including the freeze-frame photographs of Harold Edgerton and, in 1981, the first photographs to be encoded onto a disc by NASA. Exhibitions have focused on the artistic aspects of flash photography, holography and Polaroid photography. Yet other exhibitions have been organised around the processes such as the photographic sequence, cameraless photography and advanced darkroom techniques. In the 1990s the curator (and, later, Director of the Gallery 1995-2005) Paul Wombell organised exhibitions that foretold the eclipse of analogue photography by digital means (‘PhotoVideo: Photography In The Age of The Computer’, 1991 and ‘Unnatural Selection: Aziz + Cucher’, 1996) paving the way for photography’s digital revolution reflected in the Gallery creating it’s first digital curator post in 2012. In tandem with these developments, TPG has retained a commitment to showcasing vernacular, ‘non-art’ and archival photography as a key tool in understanding photography’s role in society. Images have been culled from family albums, industry, portrait studios, science laboratories, personal collections, military, anthropological and natural history archives, to name but a few sources. Photographers range from experimental scientists, to snapshooters to postcard photographers and now translate into digital programmes examining the impact the exponential growth of digital imagery has had on our everyday lives through the internet, datasets, machine learning and more with exhibitions such as ‘All I Know Is What’s On The Internet’ (2018-19).