David Richard Gallery presents the gallery’s second solo exhibition for New York artist, Li Trincere. The presentation, In Dialogue: Paintings and Drawings, includes 12 paintings and 30 drawings that span 3 series of work that Trincere created from 2008 through 2020. 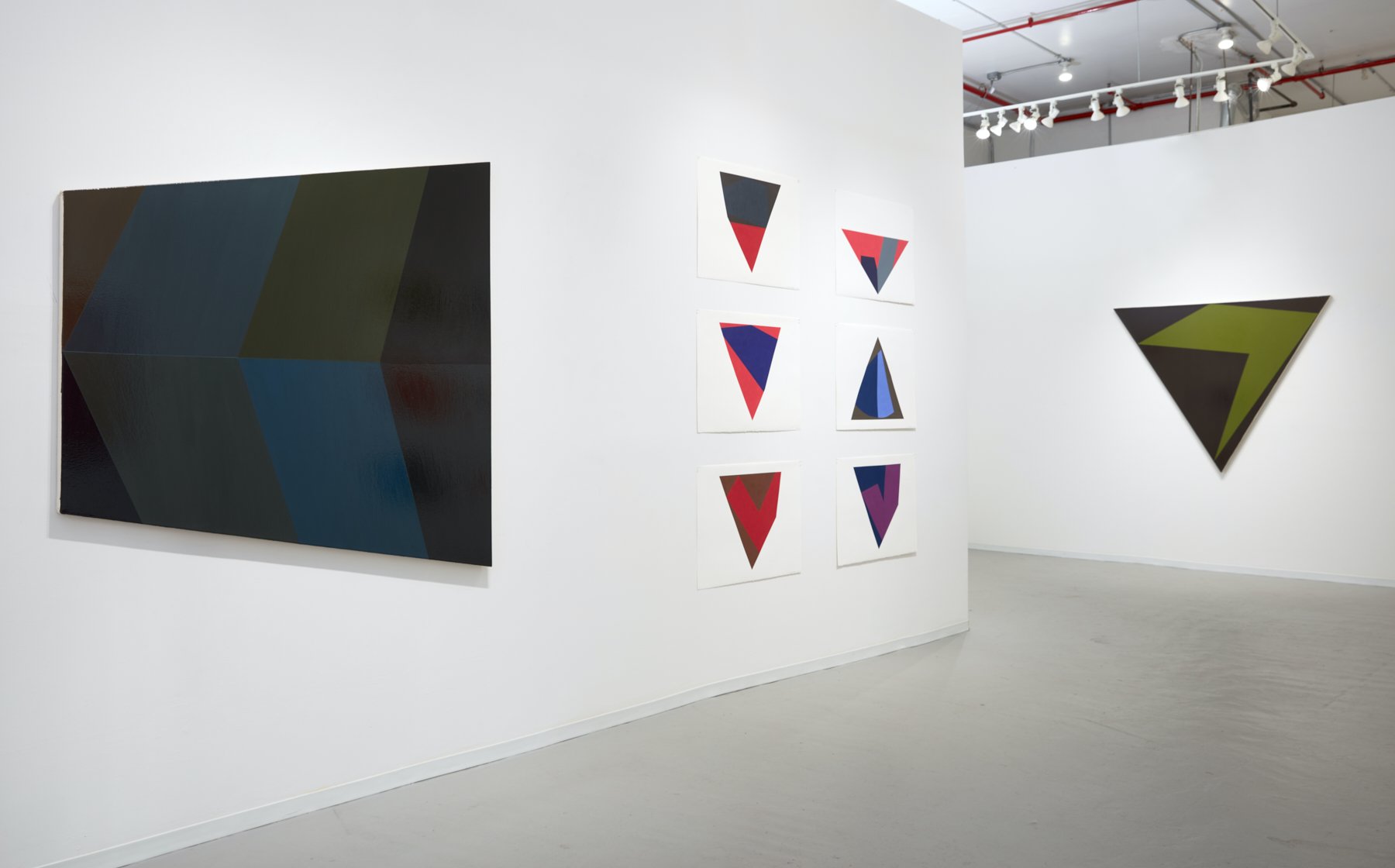 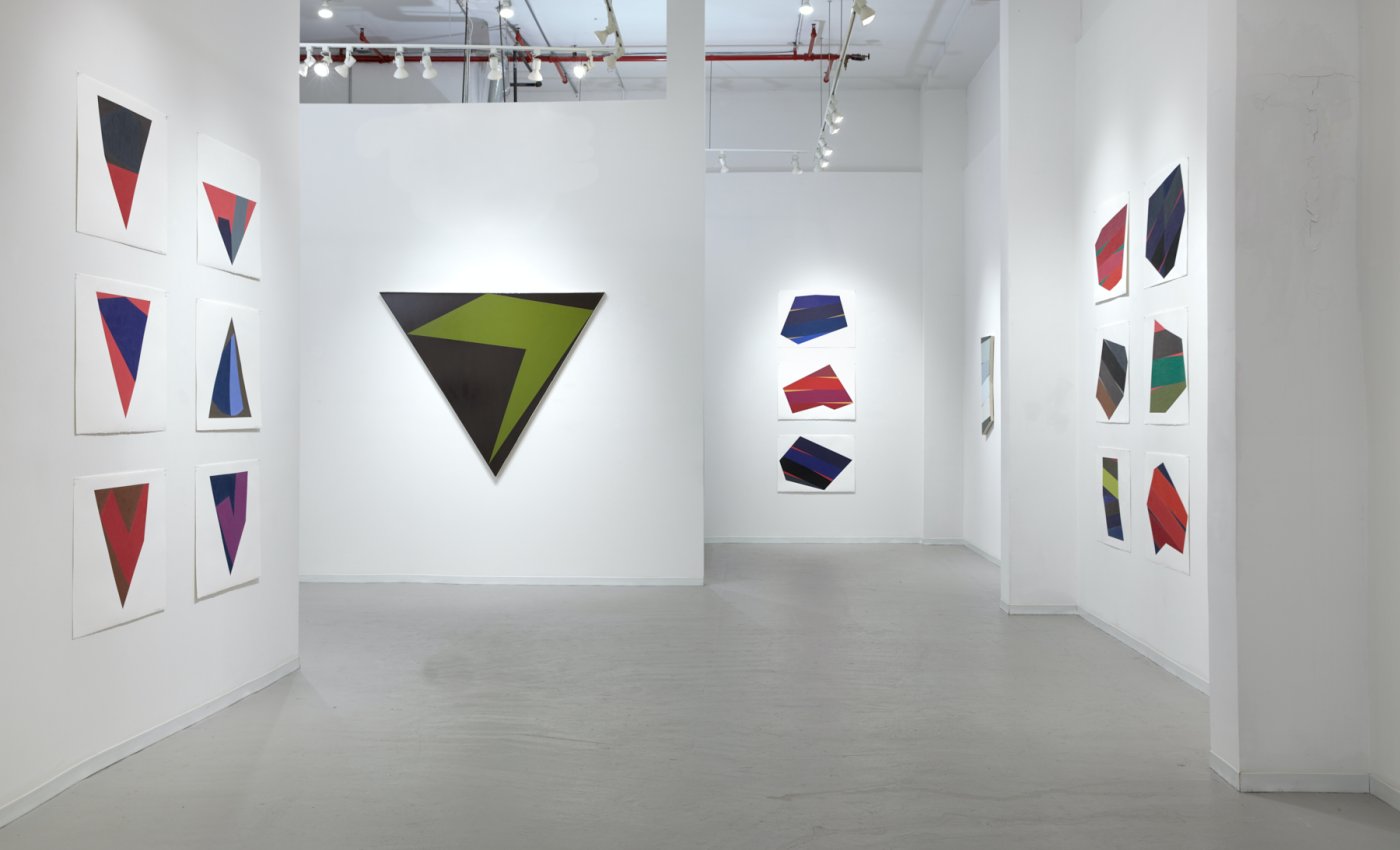 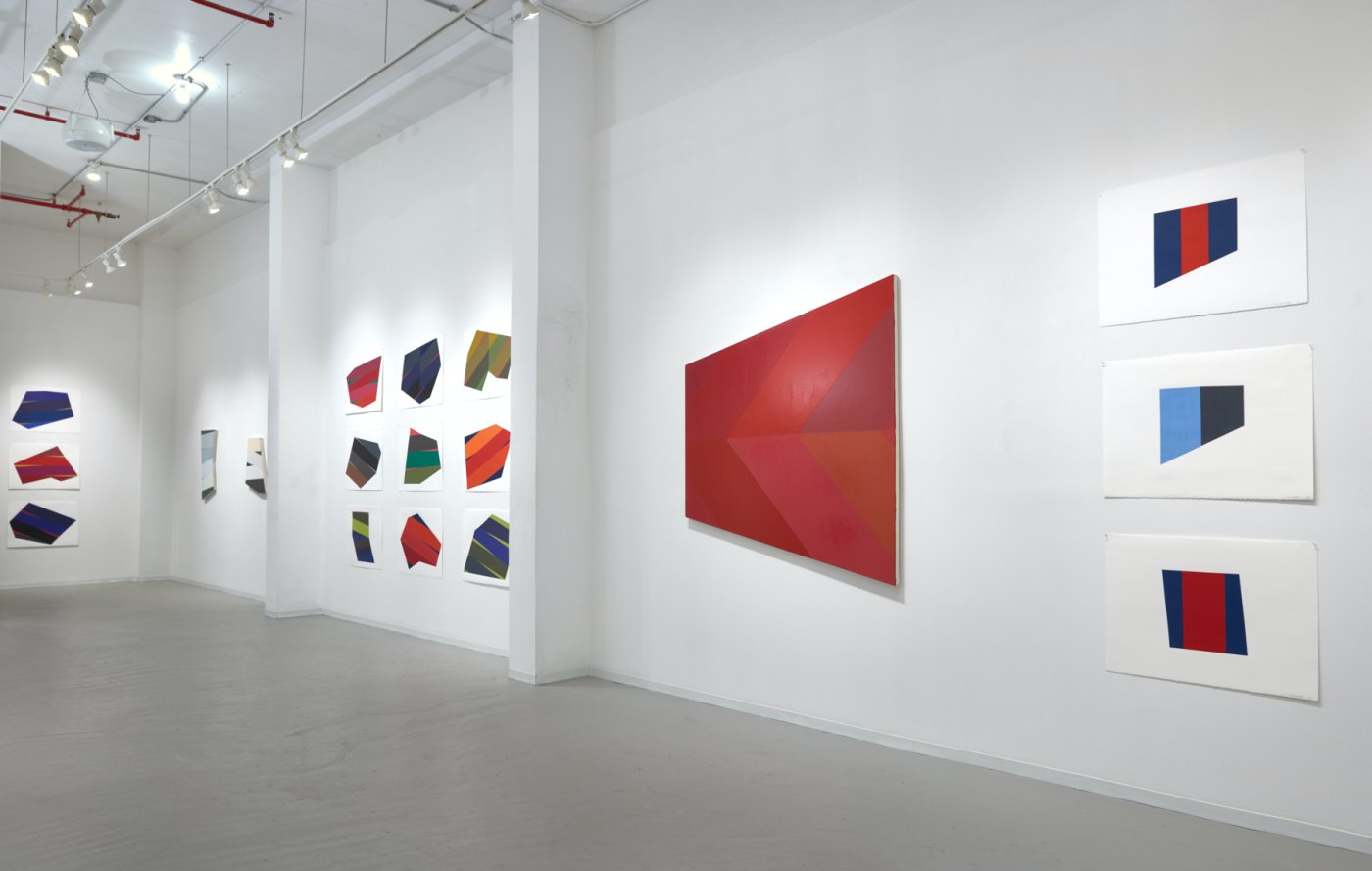 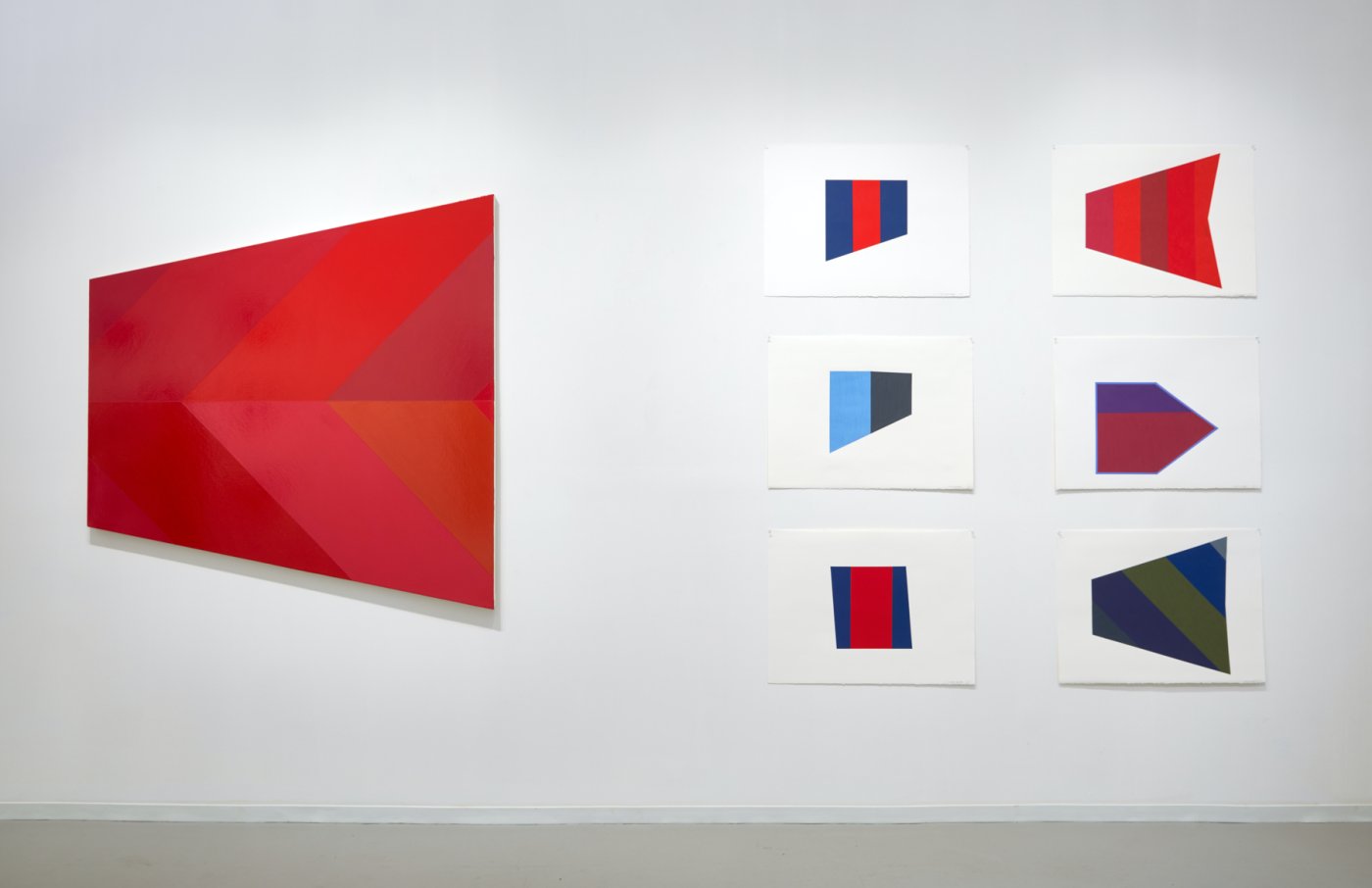 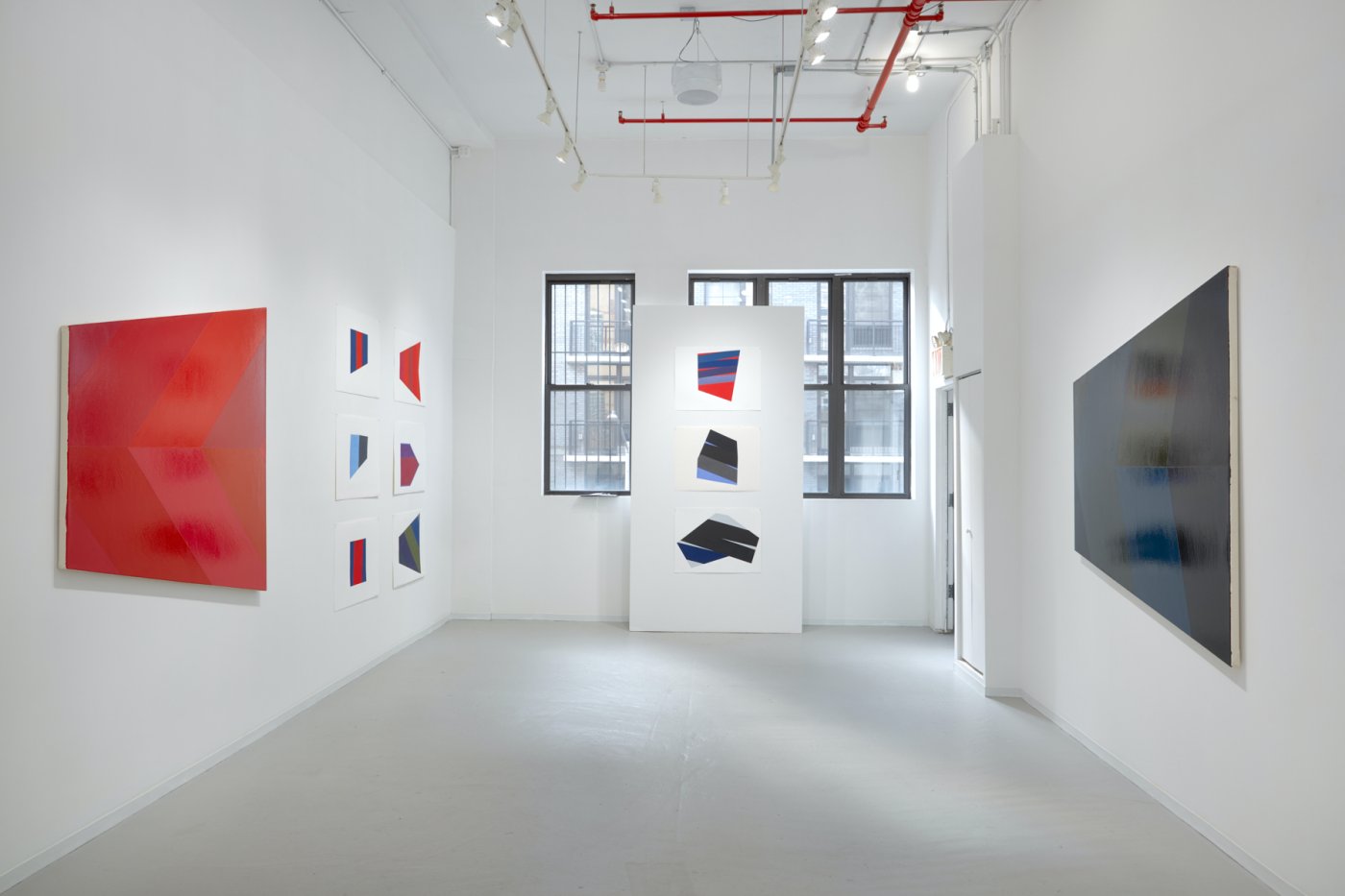 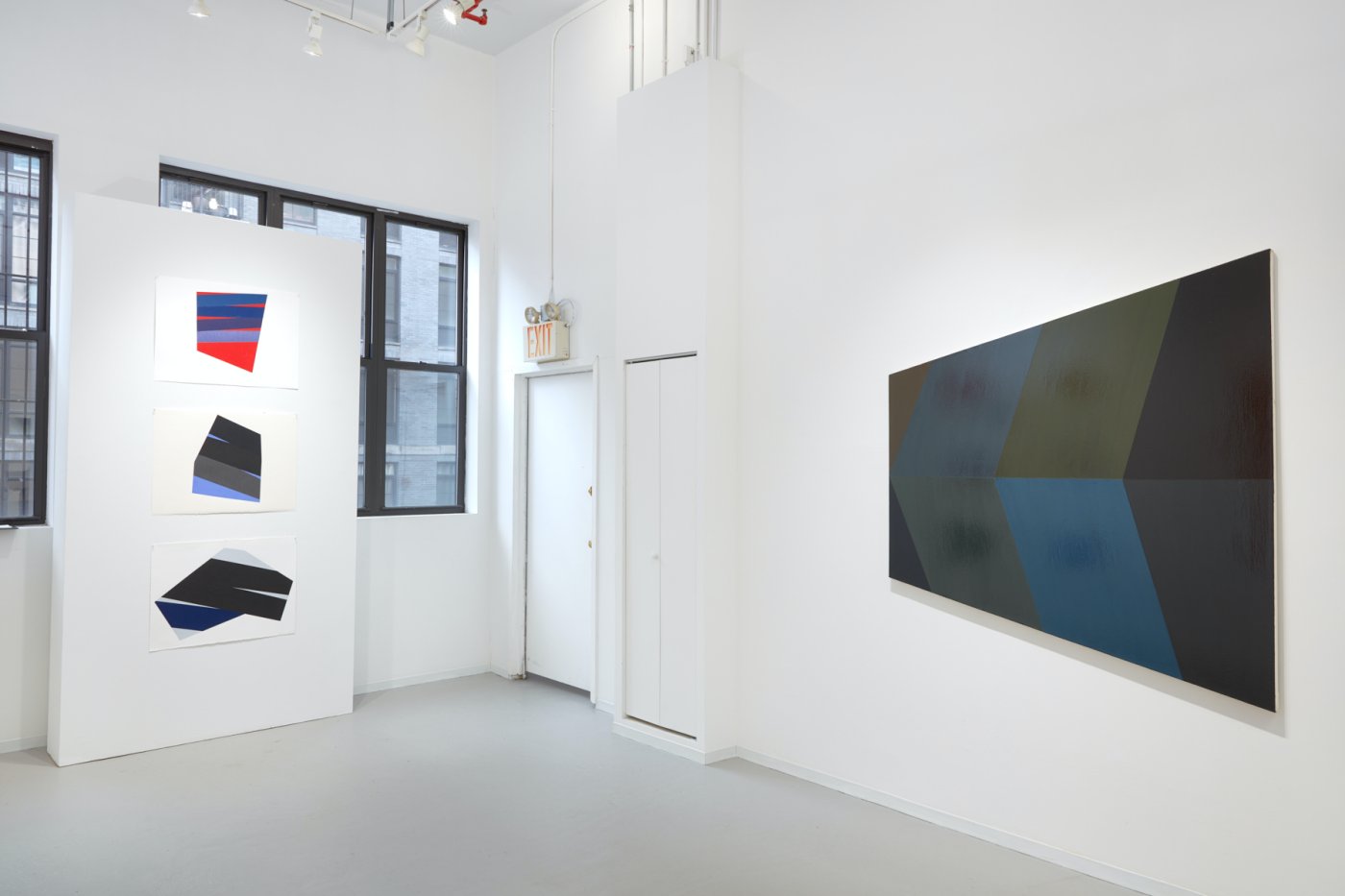 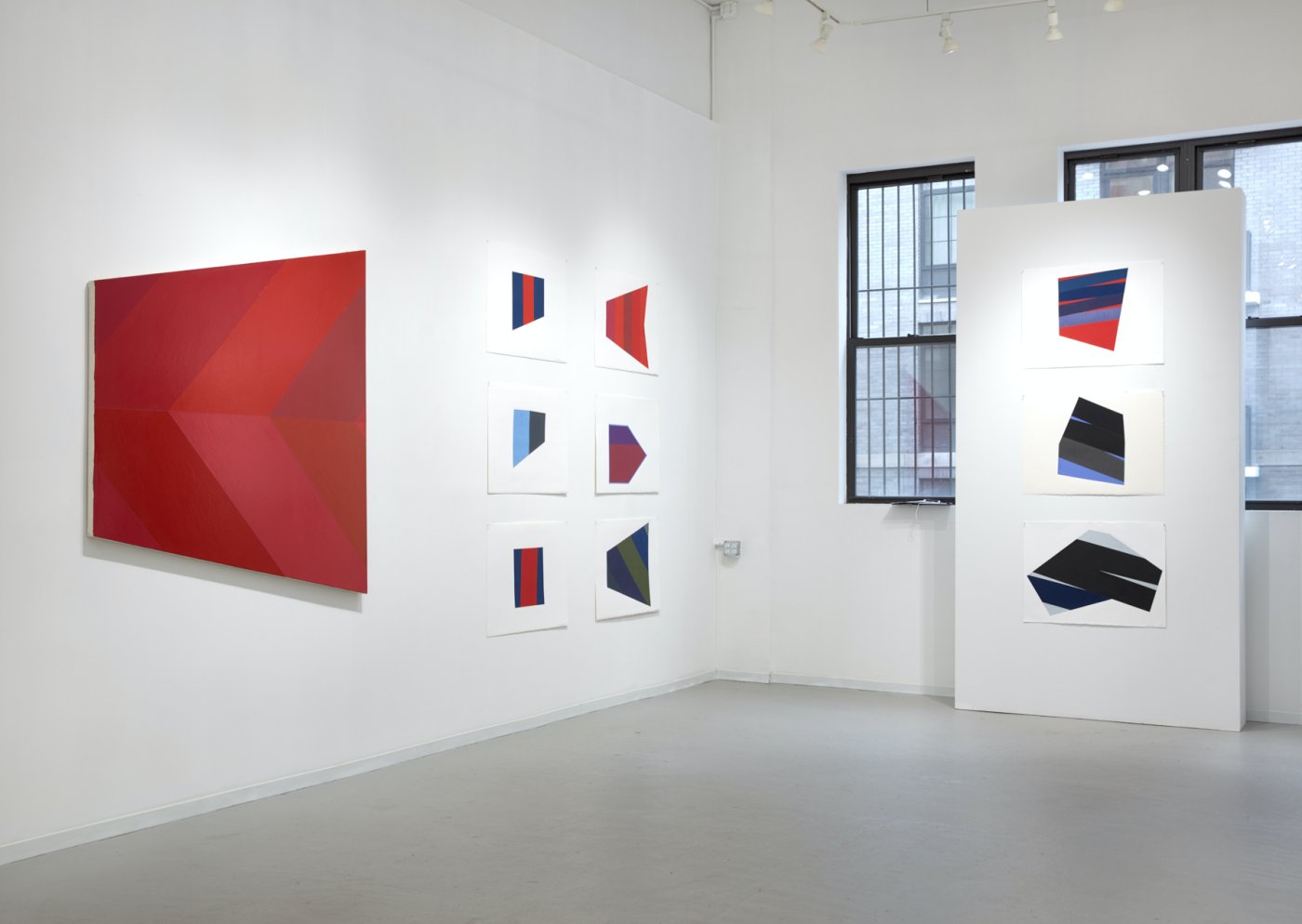 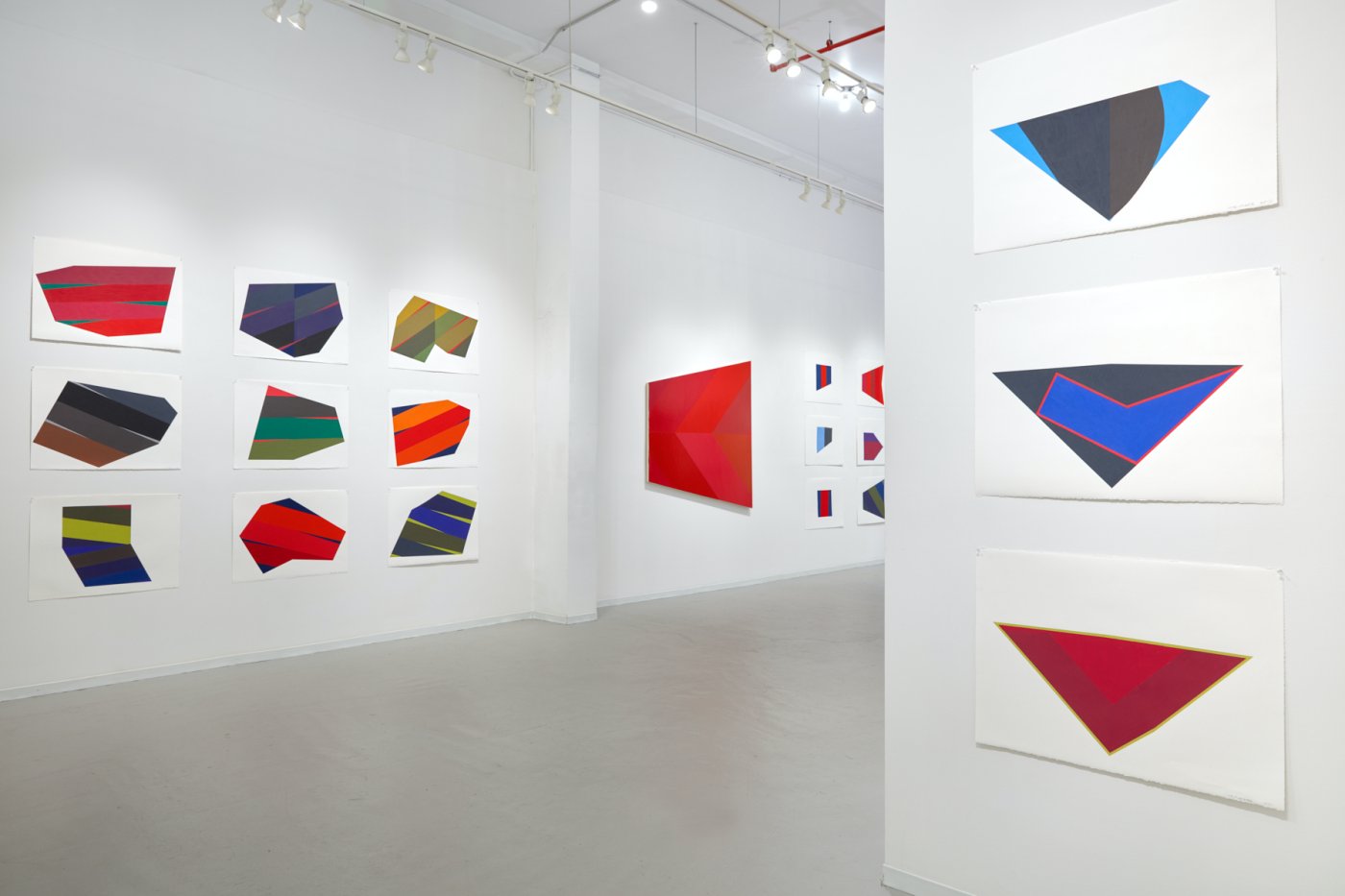 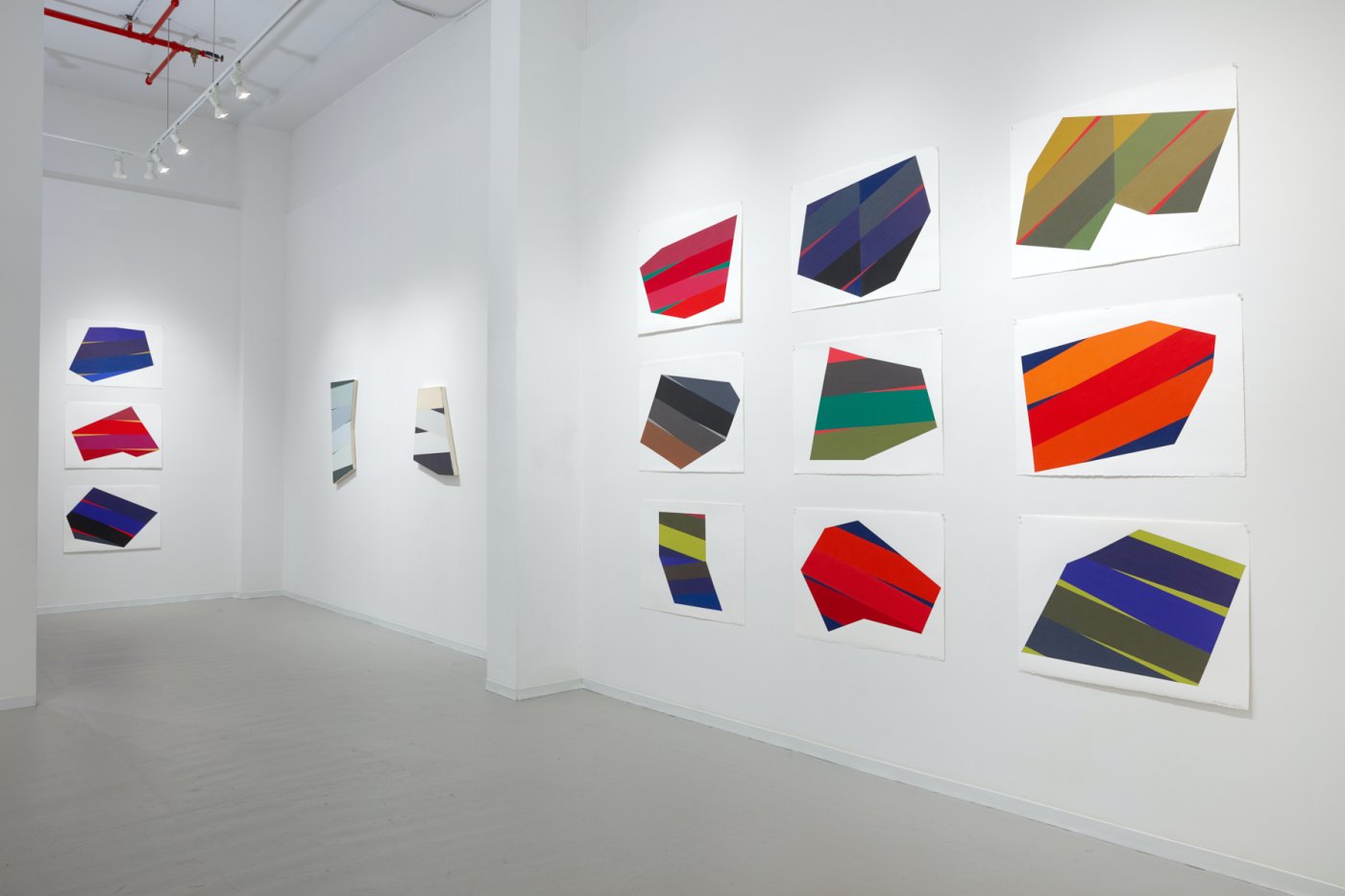 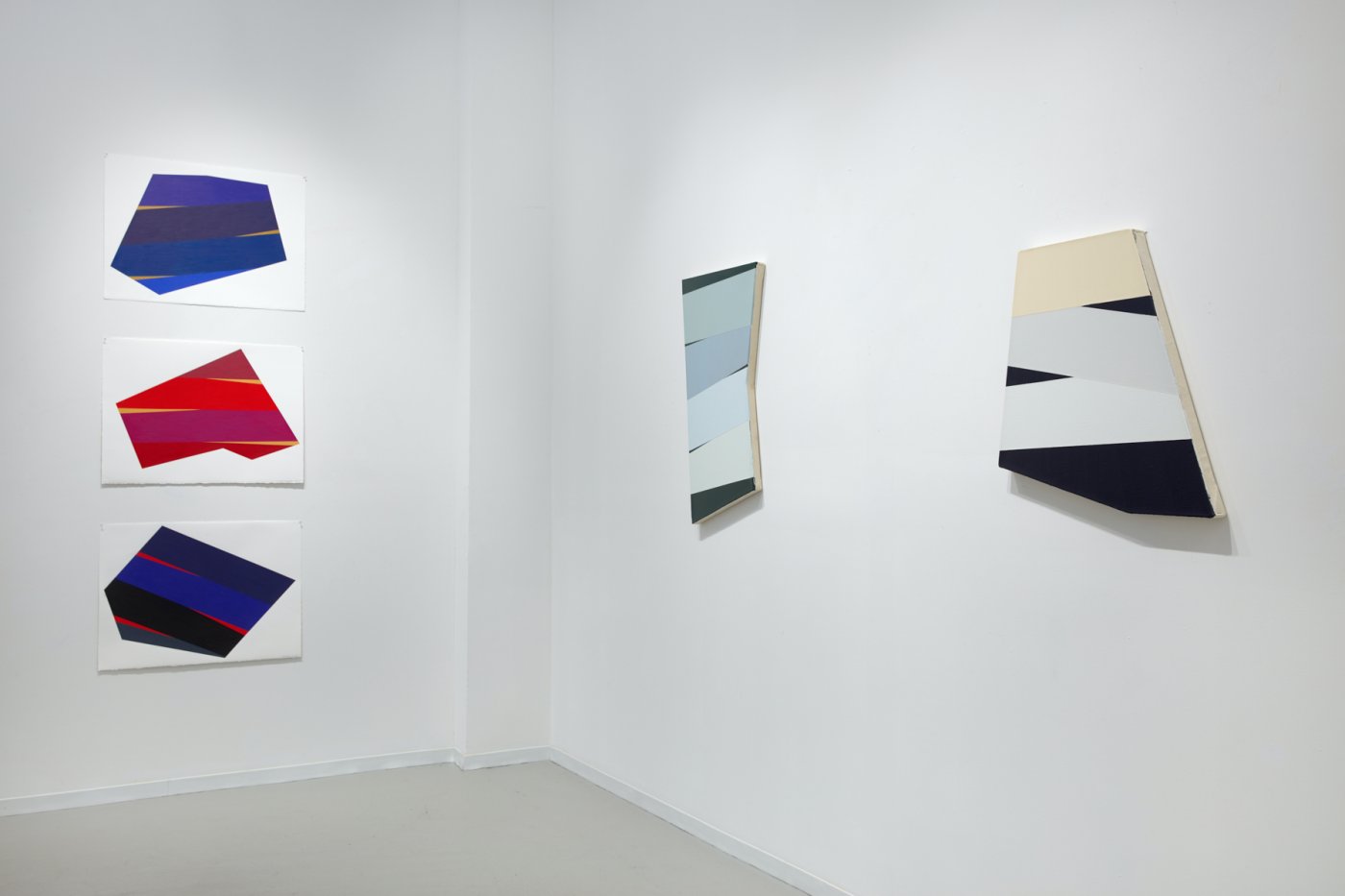 The series are defined aesthetically by a combination of the shapes of the canvas perimeters, compositions and surfaces (matte or gloss). However, the emphasis of the exhibition is on the artist’s drawings, which are vast in number and an integral part of her studio practice. Drawing nearly every day throughout her career is both an ongoing and essential aspect to her practice of making non-objective geometric art. The drawings are independent artworks and rarely a specific template for any particular painting. They allow her to explore the formal elements of line, shape and color that ultimately may give rise to similar paintings, thus, there is a crucial dialogue between the two media.

The three series of paintings presented in this exhibition includes: 1) “Wedges”, which are from around 2008 and blocky trapezoid-shaped canvases with interior wide, angled bands of color that come together along a center line to form chevron shapes and triangular shapes thereof near the outer angled perimeters. The surfaces are glossy and hence very active visually as they subtly reflect the surrounding area and the viewer in front of them. 2) “Checks”, which are from 2011 and mostly inverted triangular or slightly more vertical triangular-like shaped canvases that have wide interior bands of color that hug the outer perimeter of 2 sides of the triangle shape and generally extend beyond the perimeter. The surfaces of these paintings are high gloss, but also have a subtle fleck of either a contrasting color or reflective material included with the pigment to activate the viewer’s eye and beg investigation. Beyond that, the flecks of color and reflective materials operate much the same as the variations in color values, to play off the shaped perimeters and enhance the illusory depth of the compositions. 3) “Shards”, the most recent of the series from around 2018, have irregularly shaped canvases that vary in shape and dimensions and all have tight bands of color with subtle color and value variations. The bands are stacked, not perfectly parallel, but skewed as they run off the face of the painting, the small negative spaces off the edges and between the bands have extreme angles resembling “shards”, hence the series name.

Trincere’s paintings examine the formal properties of surface, color, and shape—the latter, by exploring the boundaries and perimeters of the paintings as well as the internal forms and negative space. All of this is achieved while strictly adhering to the basic elements of art as the subject matter of her compositions and the guiding principles of creating non-objective art, including: line, shape, form, color, value and texture. There is no emotion in her decisions, just the objective principles of non-objective art and to honor the quote by Frank Stella, “What you see is what you see.” Trincere works with large format paintings in the range of 72 x 72 inches as well as artworks about a quarter of that size. Scale is not relevant to her practice, certainly not as much as adhering to her guiding principles of non-objective painting and ensuring that the proportion of the interior elements including the width of bands, angle of lines and transition of color values are harmonic and balanced in the overall composition. When the key elements are proportional to the scale and harmonic internally within the perimeters of the painting’s elements, then Trincere deems the painting complete.

Shapes, as noted above, are an important aspect of Trincere’s artworks which includes the vacant or negative spaces that coexist with the literal painted objects within her compositions. As she states, “Since I work with literal shape, I have to work with depicted shape as well and those two have to work in proportion together with the principles of non-objective painting to function fully. It does not matter what the color is.” The extreme angled slivers that arise as negative space between the crisscross bands of color in the “Shard” series are a good example of what the artist refers to as the “depicted” shapes. However, since her canvases are shaped, this phenomenon also applies to the wall outside of the shaped perimeters of her canvases. The ground (the wall), becomes part of the composition and the overall shape of the canvas must also work with that negative space.

Color falls into 2 categories for Trincere: 1) the hues (and values thereof) and 2) additives, such as glitter and reflective materials. The hues are derived from her observation and mostly from “transient aesthetics of the street, the club, and the beach”, recalling her emergence in the early 80s in the East Village scene of New York.

Texture and tactility of the surface of the painting is a key element that becomes intertwined with color as laying down the pigment with many painstaking applications of acrylic paint using brushes is also the primary vehicle for determining these surface elements. In particular, Trincere moves between matte and glossy media and as noted, often with the addition of reflective materials in her paint. Often, compositional shapes are painted with many thin layers of pigment to build up the surface with matte color yielding forms with no real dimensionality, Trincere refers to these surfaces as “deep space,” they are more illusionistic and become the objects in the composition. In contrast, the glossy and reflective surfaces, to the artist, are more immediate and frontal, representing “flat space”. Trincere sees the flat reflective surfaces as presenting an “immediate visual impact [. . .] not an after image,” thus, they are not illusory. She “sees them and moves on,” in her words.

The range of color values and surface contrasts within the interior elements creates a dynamic interaction with one another, providing a subtle illusion of overlapping shapes and internal depth. The overall shape of the exterior perimeters of the paintings in turn interacts with the lines of the interior vector geometry and planar shapes as well as the negative space of the ground (wall) surrounding the canvas. In the “Shards” and “Checks” series, an internal torque and tension is created as the viewer’s eyes become activated by the extreme vector angles, value shifts of color, and contrast of the matte, shiny and reflective surfaces making their mind susceptible to the suggestion of dimensional depth and volume as well as a bending and distortion of the picture plane.

Trincere “works in sequences, one painting generates another paint.” After she has explored the various permutations of surface, color, and shape, not exhaustively, but enough to satisfy her curiosity for that particular set of elemental parameters, then the series is complete for her purposes and she moves on to the next. For Trincere, hard-edge and non-objective painting has endless references and influences from every aspect of an artist’s life and career that become rich sources for new ideas and compositions. In her words, “ When you start making hard-edge work and non-objective painting, you start and never run out of gas”.

This discussion is ending on the drawings, yet these represent and actually are the beginning of every series, the avenue for creating the insights and concepts for each series. The drawings and paintings are each stand alone, independent works of art. While the drawings precede the paintings in a new series, not every drawing or series is realized as a collection of paintings. Moreover, each drawing and painting is unique, meaning that there is not a drawing corresponding to a specific painting. The two media co-evolve in terms of exploring the parameters of surface, color, and shape, but only a handful are realized on canvas. The drawings are created with Caren d’ache on 100% cotton BFK paper. Interestingly, given the unique surface of the waxy medium, the drawings can only be used to explore color, line, proportion of shapes and the overall compositions. Exploration of the tactile matte and glossy surfaces, reflective additives and multi-layering of each hue and value can only be achieved with the paintings. Thus, illustrating how each series of artworks evolves out of and depends upon both diverse mediums: drawings and acrylic painting on canvas.

Li Trincere lives and works in New York City. She has shown in the United States and abroad since 1982. Moving to New York in the early 1980s, she settled in East Village and was part of that important development of abstract art in Lower Manhattan. Trincere exhibited along with her colleagues Olivier Mosset and Alan Uglow at the Mission Gallery run by D.D. Chapin in 1984 and 85, then with the influential and important Julian Pretto Gallery. In 1989 and 1990, her work was presented in solo exhibitions at Galerie Rolf Ricke in Köln. More recently, Trincere exhibited at Minus Space in Brooklyn. David Richard Gallery is pleased to represent Li Trincere.