Lisson Gallery presents Leon Polk Smith: Prairie Moon, an exhibition of works by Leon Polk Smith, organized by the
curator, writer, and art historian, Lynn Zelevansky. While recognized as a forerunner of American hard-edge painting, whose innovative abstractions of the 1950s were highly influential, the Oklahoma-born Smith often went unappreciated during his lifetime. This exhibition, featuring works spanning nearly fifty years of his mature career, from his struggle with the legacy of Mondrian to his impact on the language of abstraction and his acknowledgment, later in life, of the influence on his art of the rural prairies of Oklahoma, where he grew up, and the importance of his Cherokee heritage. 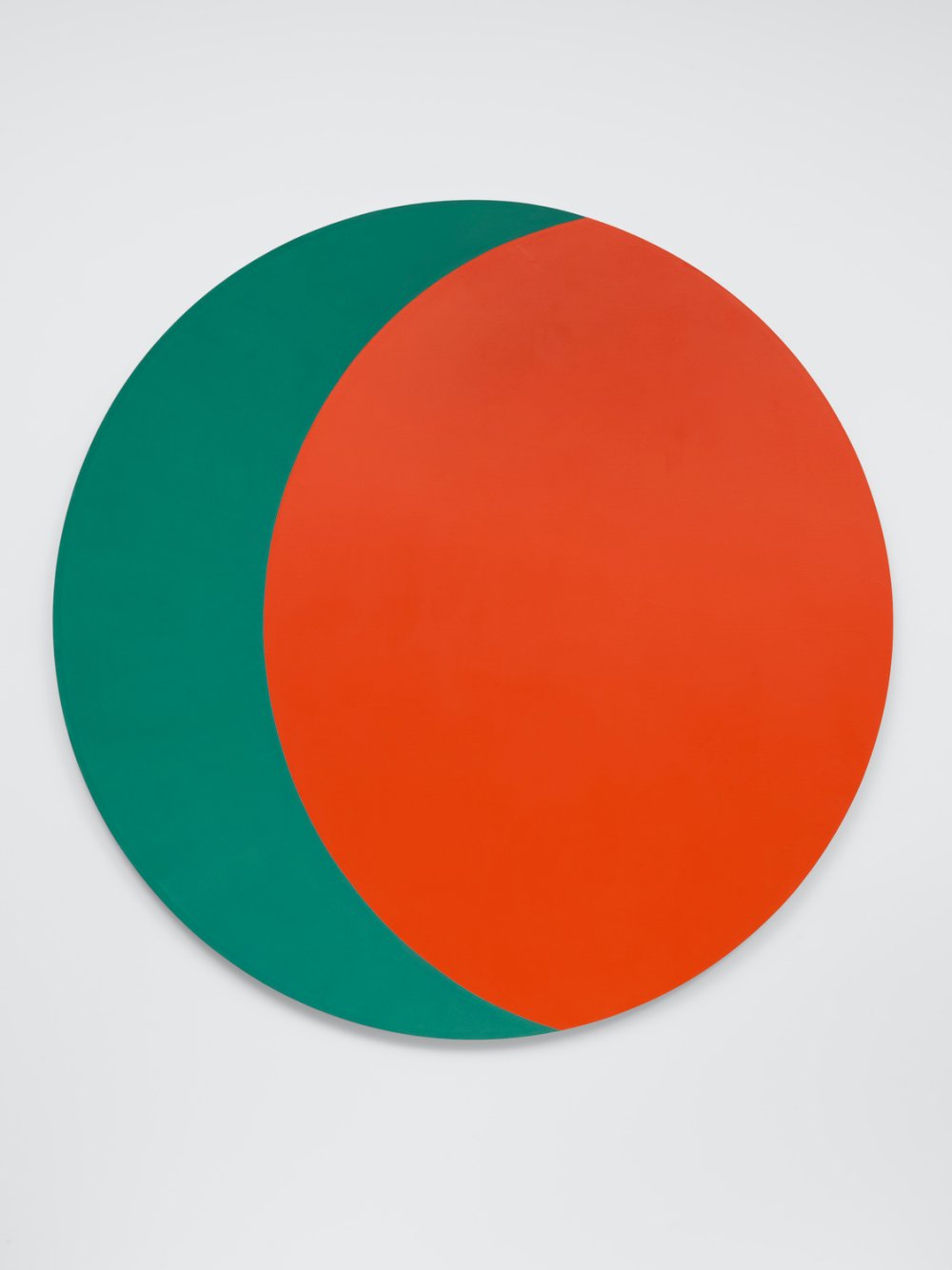 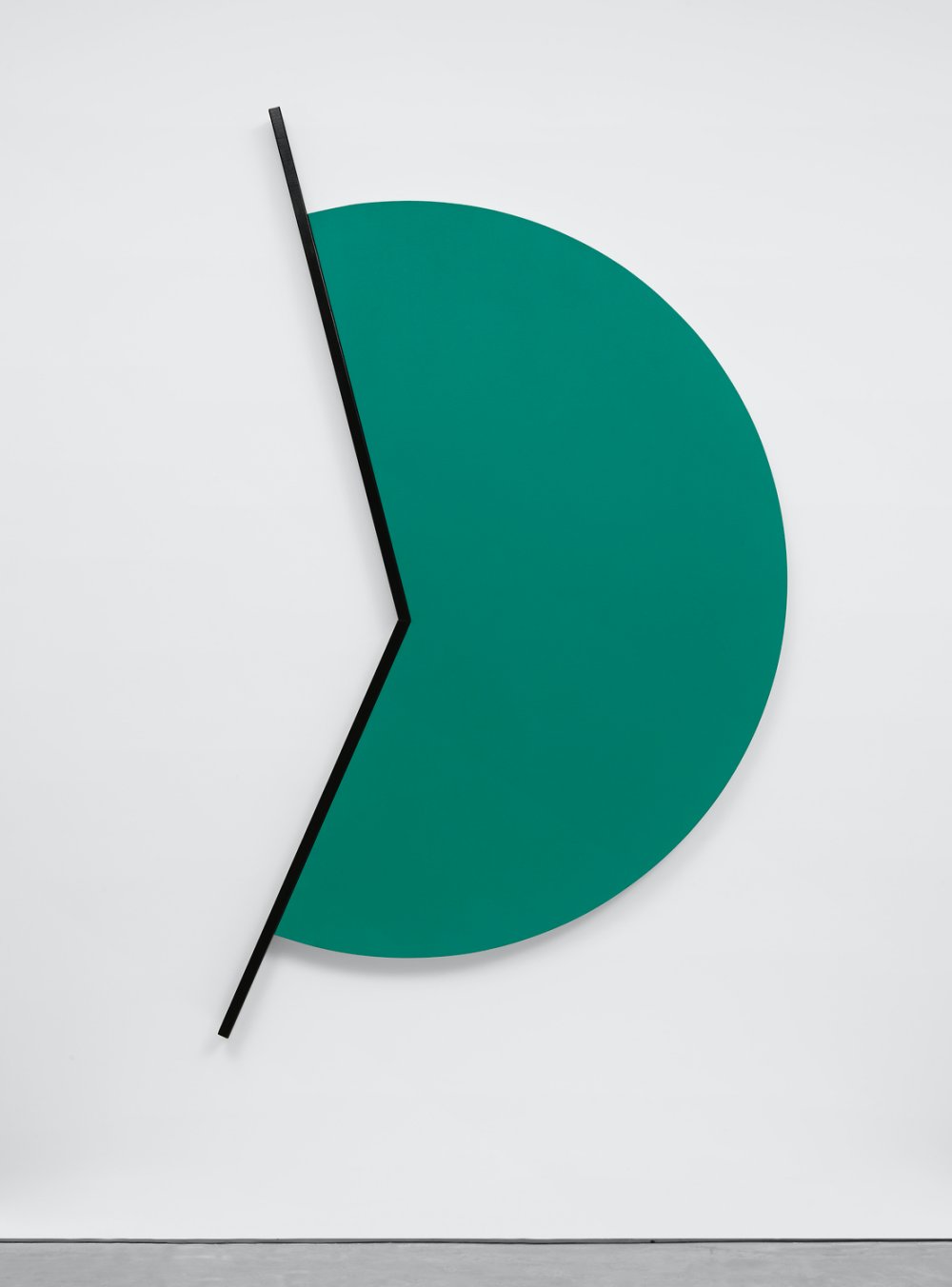 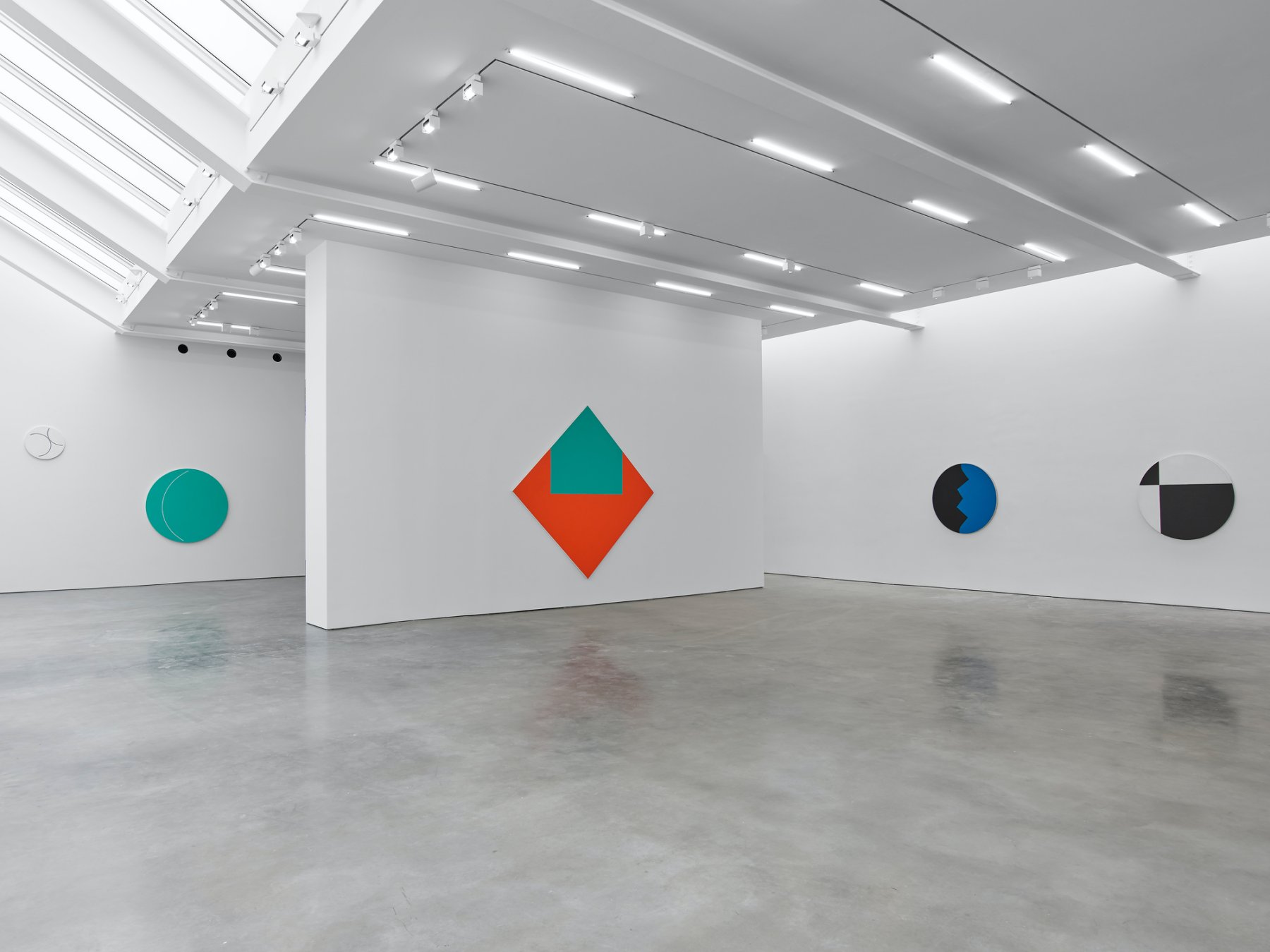 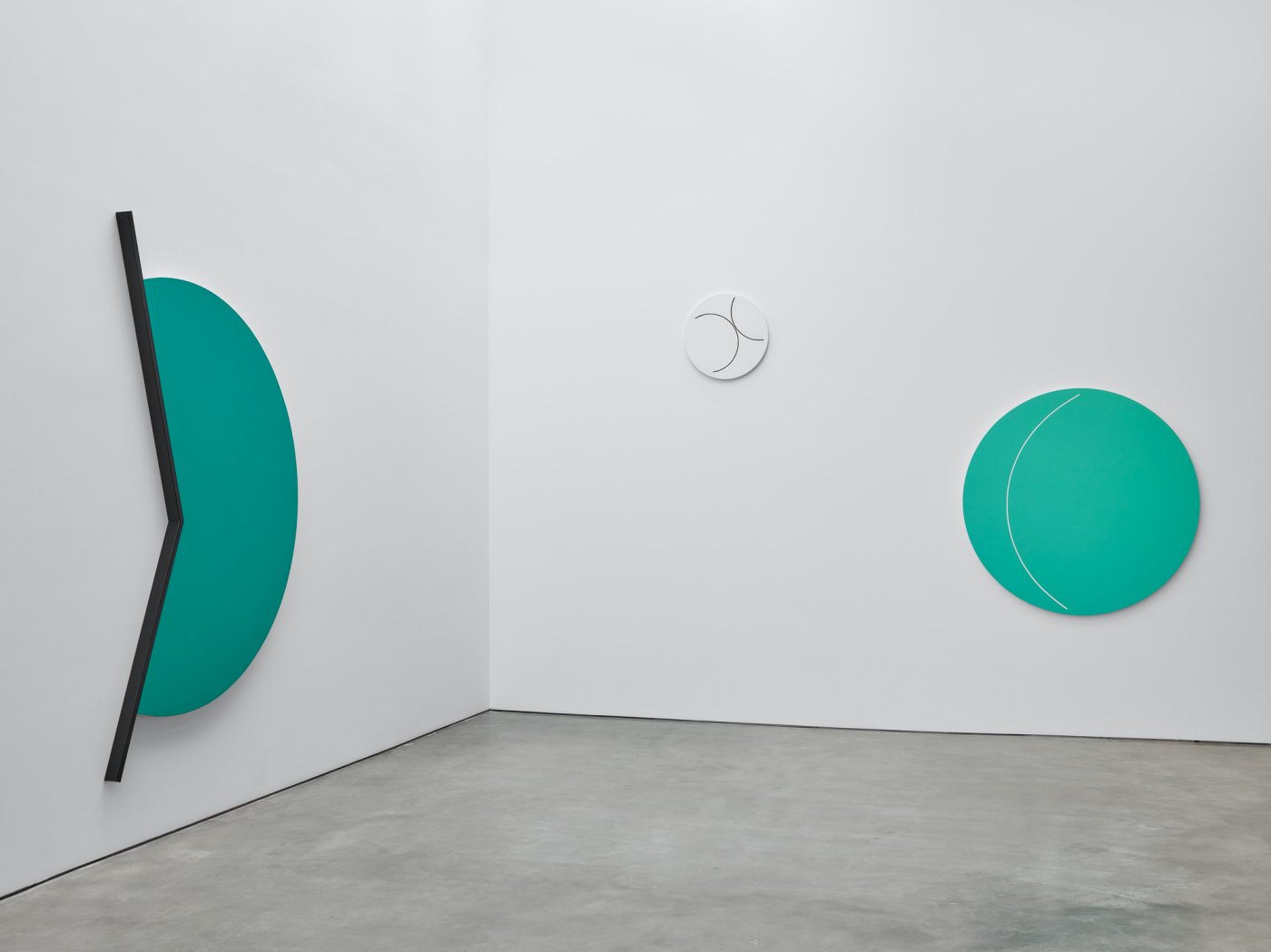 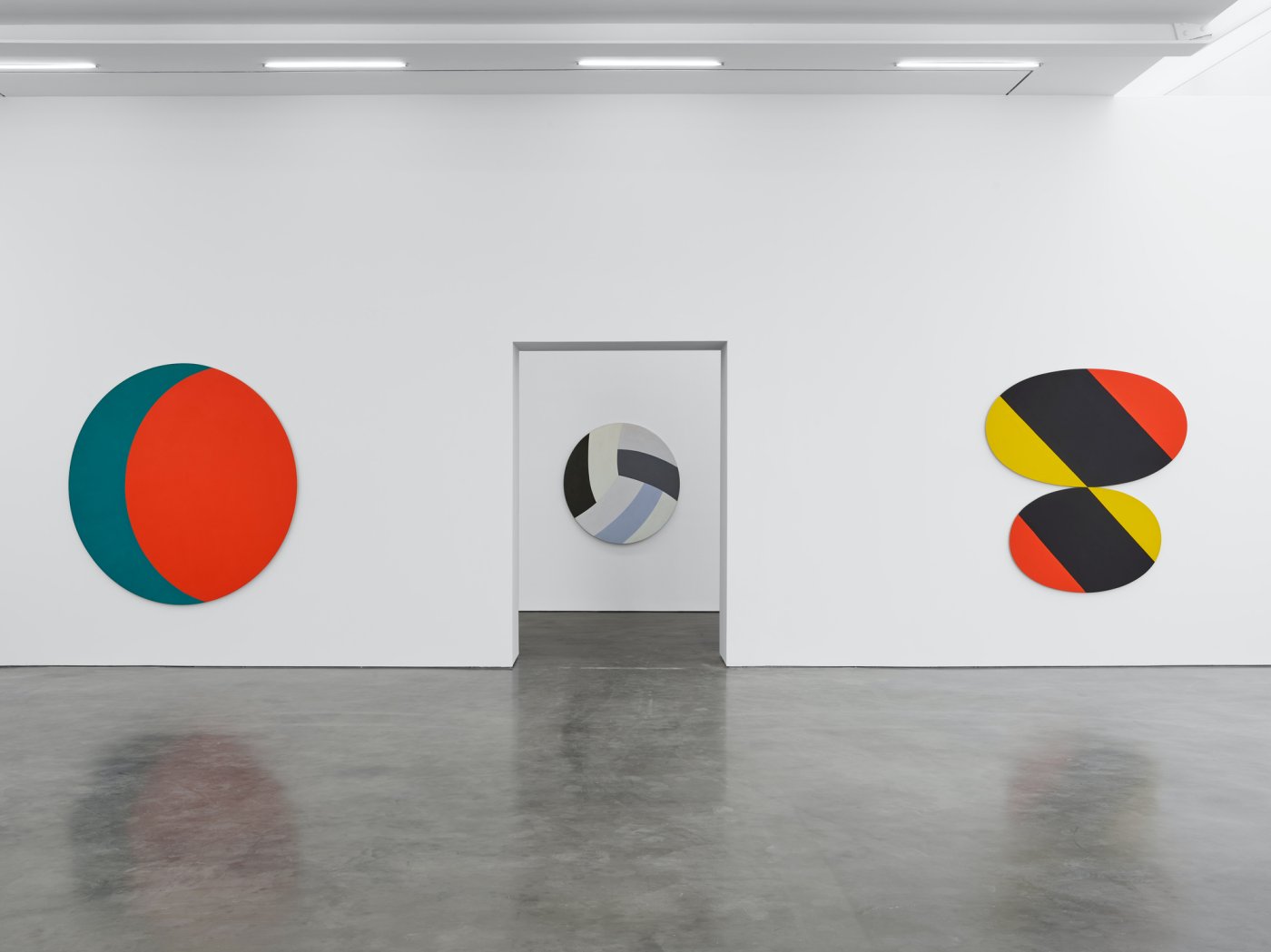 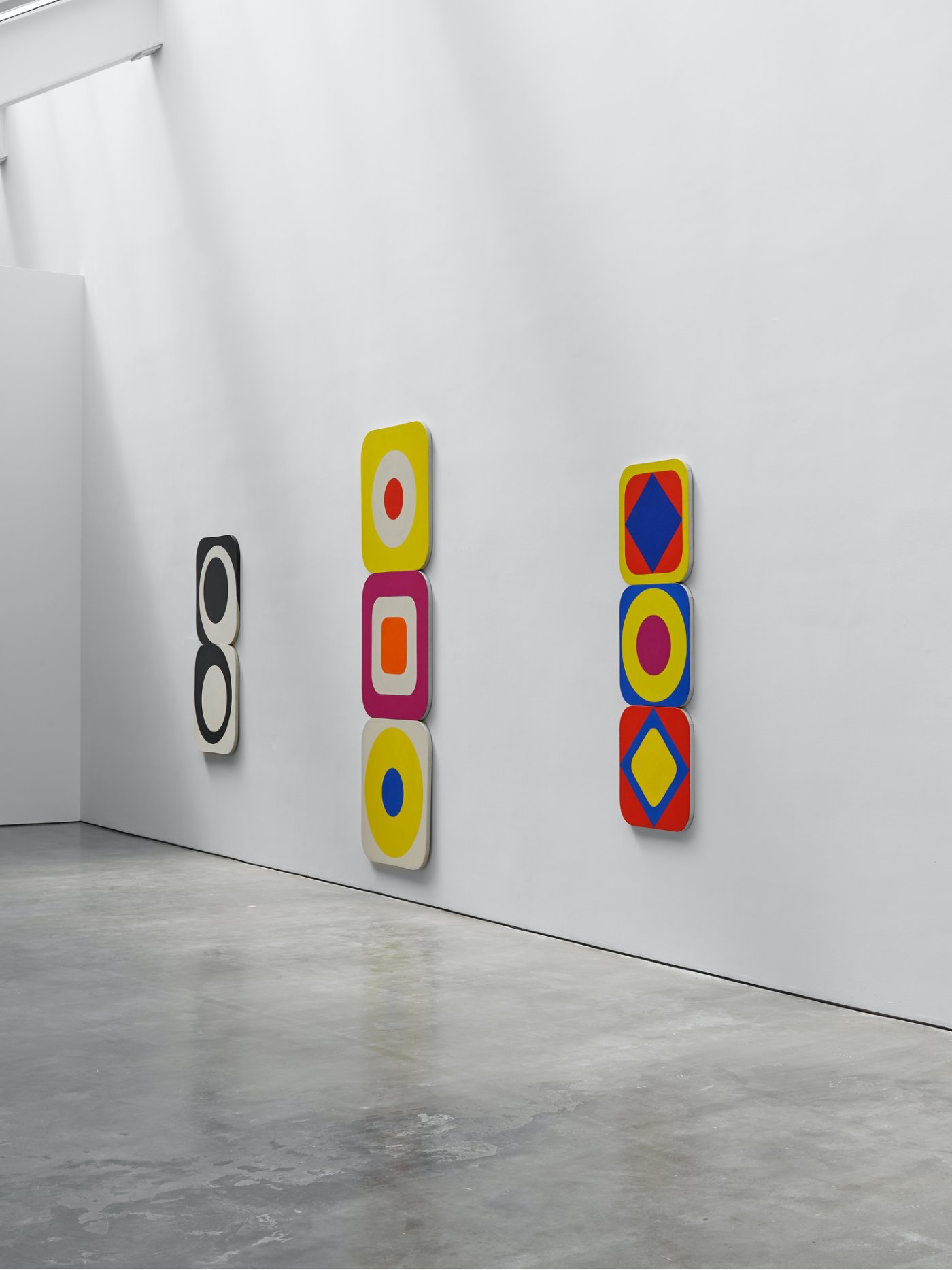 Born to a poor family in 1906 when Oklahoma was still Indian Territory, Smith spent his childhood attending a one-room schoolhouse, working on the family farm with his parents and eight siblings, and socializing with his Chickasaw and Choctaw Native American neighbors. After high school he took jobs as a telephone lineman and rancher, sending money home to the family. When they lost the farm, he attended East Central State Normal School in Ada, Oklahoma to realize his dream of becoming a teacher. During his senior year, he walked past an art class and intrigued, decided to audit the course. It was his first exposure to easel painting. Immediately absorbed, he knew that he was an artist. Accepted to Columbia University’s Teachers College in New York for a summer course in 1936, he had his first encounter with the city and its blossoming modern art scene. At New York University’s Albert E. Gallatin Gallery of Living Art, he saw the work of Modern masters. Jean Arp, Constantin Brancusi and Piet Mondrian made profound impressions on him. During the following years, he met and was mentored by the influential Hilla Rebay, director of the Museum of Non-Objective Painting and chief advisor to Solomon R. Guggenheim.

The works in the exhibition follow Smith’s artistic trajectory. In the earliest piece, Untitled (1949), he worked with Mondrian’s primaries, outlining red, yellow and white spaces within a grid in strong black lines. The large blue area on the left of the work, however, creates a sense of great depth, countering the older artist’s insistence on the shallow space of the grid. Black White Repeat with Red No. 2 of 1953, part of a series of tondos with black-on-white grids that have red or yellow in one of the upper quadrants, continues Smith’s work with Mondrian’s grid and primary colors, but within the painting is a close-up view of a rupture — an event in which the grid has split, and the space has grown wider at the breaking point, allowing for the perception of a subtle roundness to the image, mirroring the curve of a ball. Smith had been searching for a way to introduce the curve into Mondrian’s grid and this was a step toward accomplishing that.

In 1954 Smith encountered a catalogue of drawings of athletic equipment and was fascinated by the seams on the basketballs, tennis balls and baseballs sketched within it, and the way they defined the shapes on either side of them. The power of the line and the relationship between the shapes it creates became a rich and ongoing source of exploration for Smith. In a novel way, he mimicked the sports balls in his paintings, and also invented his own shapes. Rowell (1957) resembles a soccer ball, while in Pontotoc (1958), the shapes within the tondo have metamorphized, and become his own invention.

A year before he encountered the sports catalogue, Smith discovered another important source of inspiration. As early as 1953 he had begun to draw ficuses and cacti as well as avocado and dusty miller plants. They provided an opportunity for him to evolve a unique visual language, and their impact can be felt into the 1960s. A modest drawing of avocado leaves from that first year reverberates fourteen years later in a major statement, Constellation: Red Green Black (1967), in which three elliptically shaped floating forms can be read as leaves, so that the whole becomes a giant plant with an invisible stem, blowing in the wind.

In the late 1950s, Smith’s involvement with hard edge paintings took a turn as his works became more idiosyncratic, humorous, and sometimes even romantic. In his Atapachi (1957), two shapes face each other from the edges of the canvas. The forms, unevenly shaped and sized, can be read metaphorically as two very different personalities engaged in a lively conversation.

In the second half of the 1960s, Smith’s work would explode with energy. His Constellations, which involve groupings of geometrically shaped canvases set in unpredictable arrangements, are dynamic and often funny. Critic Roberta Smith referred to them as “modular paintings that seemed barely to contain the bold forms painted on them.” An early draft of a press release for a 1969 exhibition states that the Constellations, “like the celestial configurations, … are groupings of individual, autonomous units clustered in brilliant patterns of varying size and shape.… [They] have no top or bottom. They may be hung upside down, sideways, diagonally or any other way, which makes them a continually changing element in a set environment.” These inventive and highly sophisticated works came from someone who, growing up, had exposure to neither traditional European type painting nor vanguard modern art, but he did copy comics from the newspapers. There is a comic-book quality to many of these works that derives from the often precarious ways in which one canvas rests on another.

Following the Constellations’ explosion of energy, Smith’s work becomes calmer in the later 1970s. Paintings are now composed of single canvases and a more traditional kind of geometry returns, but with new implications. In the tondo Untitled (No. 7609) (1976), for example, a large triangular black shape with the curve of the canvas as its bottom touches a smaller version of itself at a single point, leaving two white shapes that blend with the white wall on which the painting hangs. In theory, those white shapes could go on forever, but at the same time as they spread outward, they draw the environment in, making the wall part of the work. In Smith’s later paintings it becomes evident that, like the expanses of the Oklahoma prairie, the bright colors of the Native crafts that surrounded him in childhood never left him: “I grew up in the Southwest where the colors in nature were pure and rampant and where my Indian neighbors and relatives used color to vibrate and shock,” he said.

Whatever the hurdles for Smith, or the demons that lived within him, his art tends toward optimism, from the baseball, tennis- and soccer-ball tondos of the 1950s, to the often comical and dynamic Constellations of the 1960s and the luscious beauty of the prairie-like abstractions of the late 1970s and 1980s. In the 1990s, as Smith approached his ninetieth birthday, he radically simplified his art. His abiding interest in the relationship between a line and the forms it defines took center stage as he began working through old motifs exclusively in line. Contrasting colors were no longer necessary. Acrobatic (1996), made the year that Smith died, reimagines Stonewall (1956), expressed exclusively with lines. The two forms emerging from the edges of the canvas are dematerialized — ghosts of their earlier selves — as they meet in a kiss.

The exhibition will be accompanied by a fully-illustrated catalogue edited by art historian, curator and writer Lynn Zelevansky. It features new scholarship by Zelevanksy; Elizabeth Buhe, a twentieth- and twenty-first-century art scholar; and a reproduction of a 1968 essay by the legendary critic Lawrence Alloway. Representing three generations, these diverse perspectives provide a rich and complex discussion on the artist’s legacy, and unprecedented insight to his career.

Leon Polk Smith’s work has been the subject of two solo institutional exhibitions this year. Leon Polk Smith: Hiding in Plain Sight was on view at the Heard Museum in Phoenix, Arizona, from February 5 to July 3, 2021. The world’s preeminent museum for the presentation, interpretation and advancement of American Indian art, The Heard’s exhibition took as its starting point Smith’s upbringing in Chickasaw Nation and Choctaw Nation Territory, pairing outstanding examples of late nineteenth and early twentieth century works of Indigenous art from Oklahoma Territory, including beadwork, hide painting, and ribbon applique, with more than forty of Smith’s paintings. Big Form, Big Space, curated by Nigel Prince and on view at the Contemporary Art Gallery (CAG) in Vancouver from May 14 to August 22, 2021, focused on paintings and works on paper in Smith’s oeuvre from the 1950s, tracing the influence of his Indigenous background but also investigating his departure from the European modernists and his own experiences living in New York.